Once the Coronavirus pandemic is over, many clubs will be faced with major economic problems. People are already beginning to predict the effect it will have on the transfer market. Prices may fall sharply or clubs may be forced to sell their most valuable assets in light of cashflow issues. Such issues may give rise to clubs looking towards newer, potentially undervalued markets for players – like Luxembourg.

Norwich City announced last Friday that they are to sign Danel Sinani on a free from F91 Dudelange after the expiration of his contract on June 30th (hopefully). Dudelange play in the Luxembourg first division, albeit they participated in the group stages of the Europa League this season against the likes of Sevilla. The Canaries’ recruitment strategy has gained plaudits in recent times with signings such as Teemu Pukki from Brondby in Denmark and Emiliano Buendia, who had been playing in the Spanish Second Division for Cultural Leonesa when he was spotted. The signing of Sinani suggests they may well be looking at, and purchasing from, markets that other British clubs tend not to once more.

In this tactical analysis, in the form of a scout report, we will look at Sinani’s strengths and play-style and do an analysis to see what Norwich will be getting and why they took the plunge despite the lowly league in which Sinani plied his trade.

Sinani is an attacking player who primarily plays in the number 10 position, though he is capable of playing on the right wing. The 23-year-old is left-footed. In the limited appearances he’s made in the UEFA Europa League, the performances have been good, especially when compared to Dudelange’s. In five games Sinani has scored four goals, as well as a solitary assist. Furthermore, when playing for Luxembourg in the UEFA Nations League, he’s registered three goals and three assists.

Firstly, the data available is limited so that has to be factored in, but despite the small sample size, there are points of encouragement. In Europe for the 2019/20 season, where Dudelange went out in the group stages, Sinani recorded 0.47 xG per 90, as well as 46.2% of his shots were on target. His finishing ability and dribbling skills are two strengths that I will explore later. 45% of 5.14 dribbles per 90 were successful. Similarly, 2.06 progressive runs were made per 90.

The relative volume of dribbles he attempts implies the importance of this on his game. Particularly when considering the central role Sinani generally plays, resulting in less space than if he was just a right-winger, in which he could come wider to receive and be able to dribble more directly with greater room to operate.

Dribbling inherently attracts the opposition, a consequence of this initial action is the opening up of space elsewhere, usually defenders’ previous position. It is a helpful tool in escaping pressure, bringing teammates into play, and initiating or enhancing attacking moves. 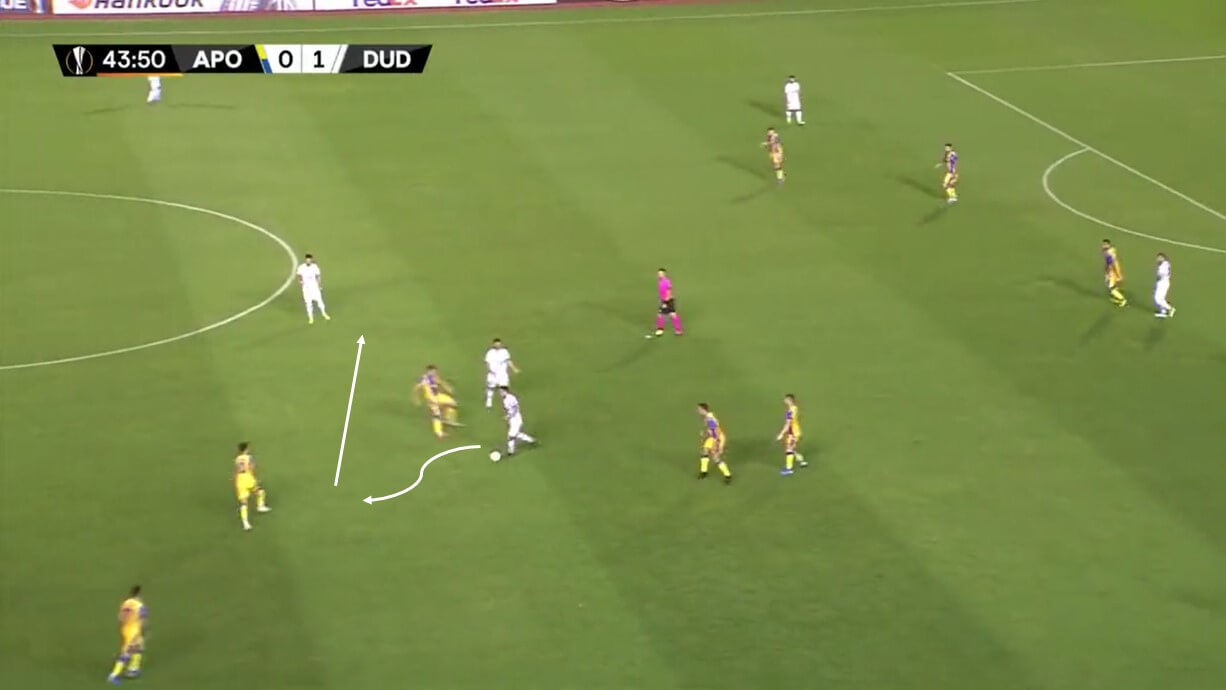 In the example above Sinani has already bypassed the two Apoel Nicosia players to his right. Then, another seeks to tackle him, however, Sinani demonstrates slick close control to shift away from the oncoming defender, thus passing the ball to his centrally-located teammate who has space and time to switch the play to the underloaded flank opposite. 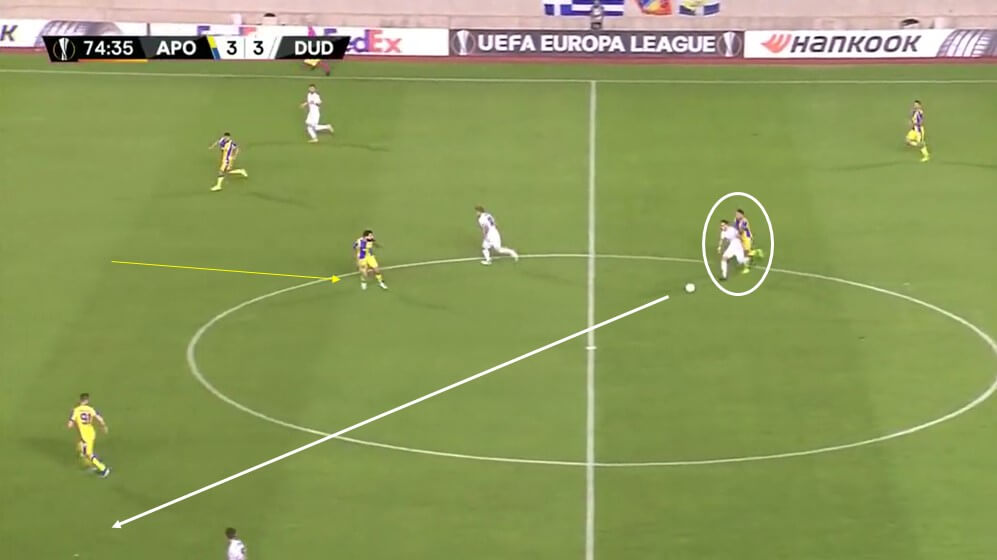 In this scenario above Sinani has initially collected the ball from a deeper position but has bypassed one Nicosia player, who is immediately pressuring him. Sinani’s progression has also forced the defender positioned centrally to step out of his defensive zone. Owing to the defender’s proactiveness, space has appeared in-behind, but reduced in the area where Sinani currently has possession. However, Sinani’s directness and awareness allows him to pass to his teammate at the bottom of the picture who has created some space for himself.

Below is a situation where Sinani has come closer to the touchline on the right-flank. This subsequently increases the space he has to control the ball and see what his best option is in context of the current game state. In this case, because the left-back is isolated in a 1 v 1 and Sinani has positional superiority, he opts for his trademark direct dribble where he cuts inside onto his favoured left-foot. 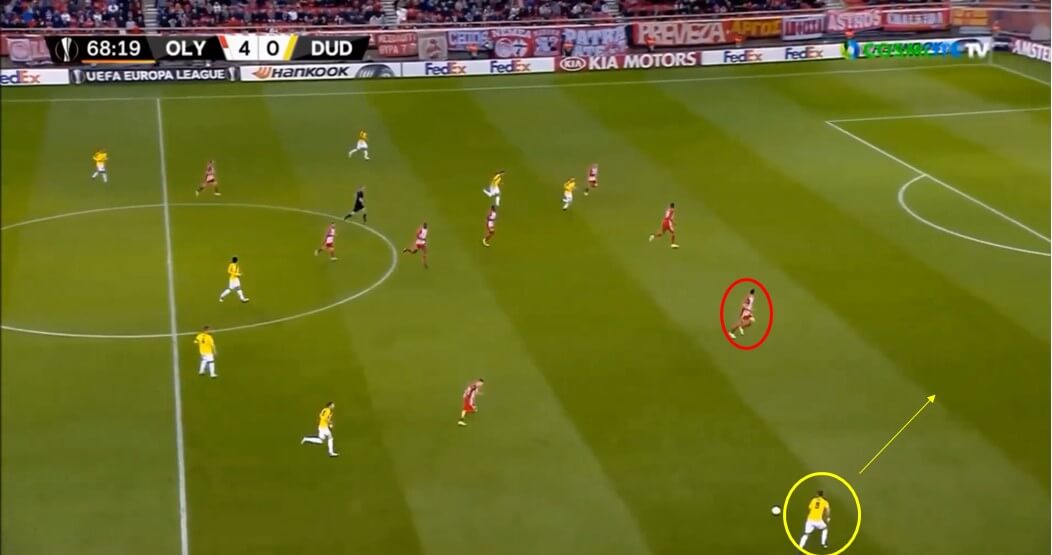 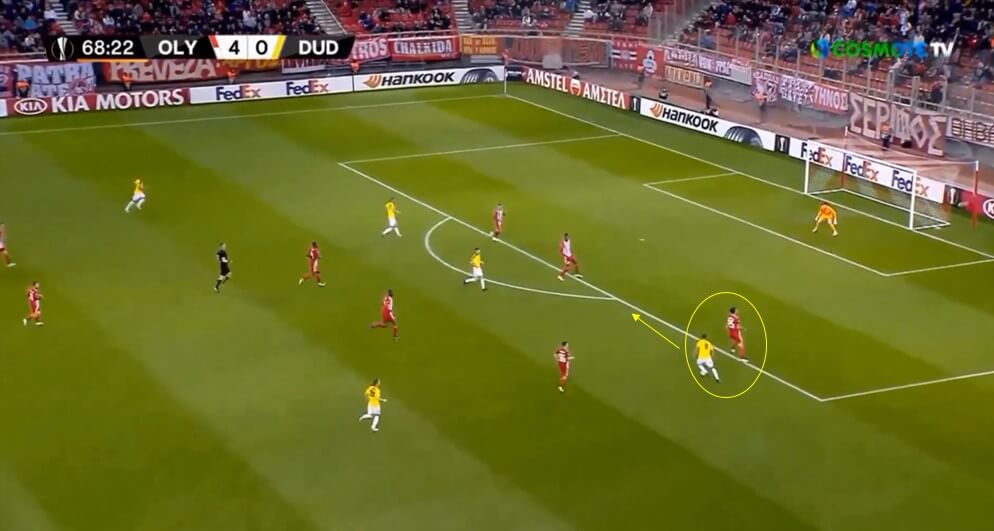 We sometimes see wingers whose game is particularly centred around direct dribbling lack an ability to be productive and consistent in their attacking output, even with undoubted quality. Therefore, it is positive to see Sinani making wise decisions and having a solid attacking contribution at the relatively high level of the UEFA Europa League.

Because Sinani is predominantly left-footed it is not uncommon to see him coming across the width of the goal to then shoot across, especially when in the left half-space. He packs a powerful shot, with a fierce left foot and is composed in front of goal.

In the example above, this happens. His teammate slides a pass down the side of the defender who has engaged, into an on-running Sinani. From there, with the goalkeeper rushing out and narrowing the angle, he possesses the composure needed and calmly lifts the ball over the keeper’s head to score. 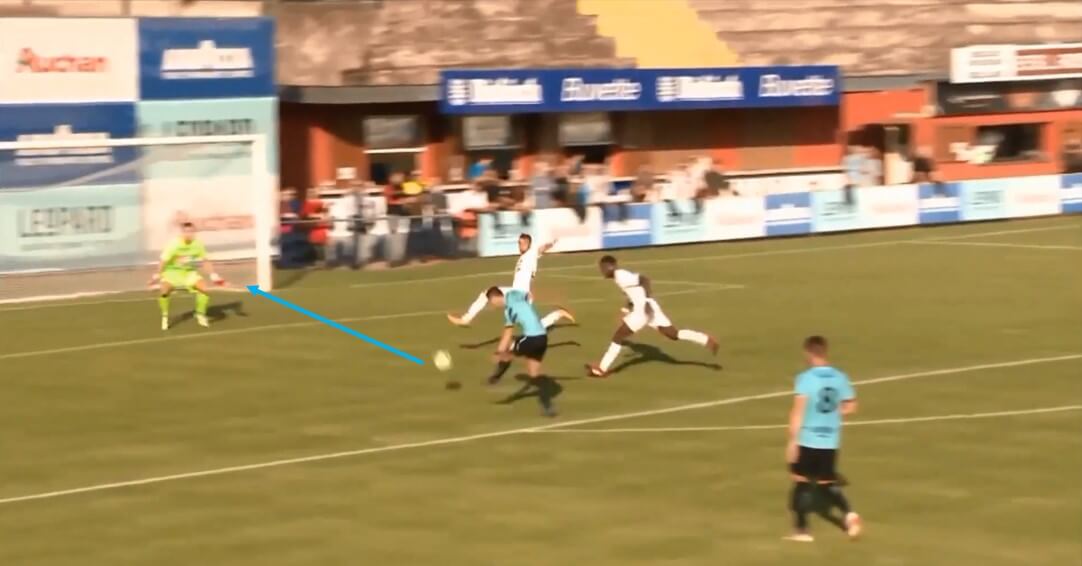 Above is a scenario whereby Sinani has just partook in some interplay on the edge of the box, resulting in superior body-orientation to the opposition defenders. This is an important point as driving across the defence line, along with the speed and nimbleness of Sinani, can allow him to be in a more advantageous position when a shooting opportunity presents itself. Here the yard of space that has opened up due to Sinani being on the front-foot, compared to the defender, is put to good effect as he scores with his left foot by shooting back across. 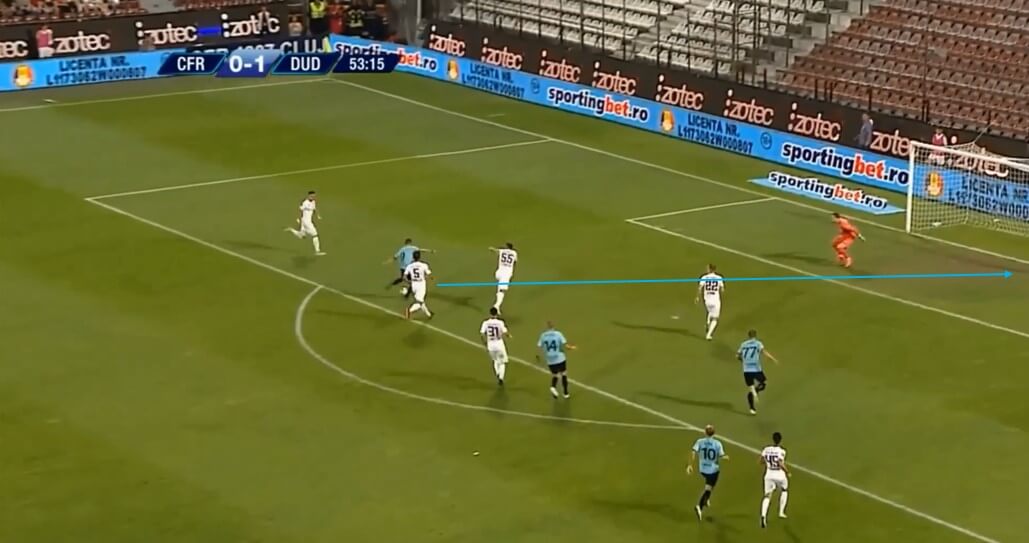 Another comparable situation happens above. Sinani is once again in a better position than his opponents due to their over-committal, in conjunction with Sinani’s dribbling ability. Like the last example, he fires across goal into the bottom-corner. This trait where Sinani dummies a shot or pass to then continue his run into a more dangerous area is utilised often and tends to effective.

How much defensive work Sinani will be subject to next season is, of course, dependent on the division Norwich are playing next season, whether that is the Premier League or the EFL Championship. Although with the European data available, he only wins 31.9% of his defensive duels.

Norwich’s defensive scheme means the number 10 chosen lines up alongside the lone striker when in a block set-up, with an overall structure of 4-4-2. Having two lines behind him means deficiencies in Sinani’s defensive play will not be as problematic. Nevertheless, I still believe that he can carry out simpler defensive tasks, such as remaining compact whilst in a block shape and shutting off passing lanes. 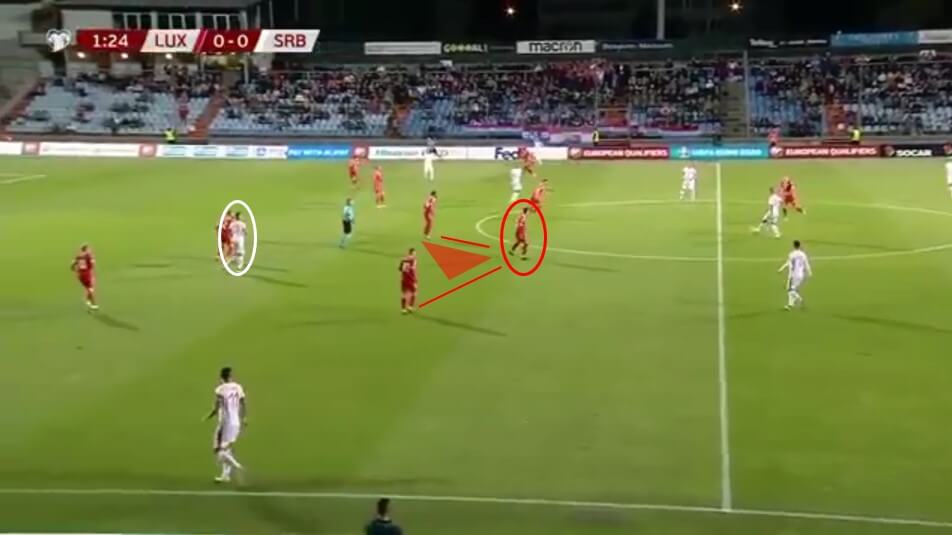 Here above, Sinani has moved ever so slightly to stop a possible passing option to an opponent between the lines, who is now in his cover shadow. 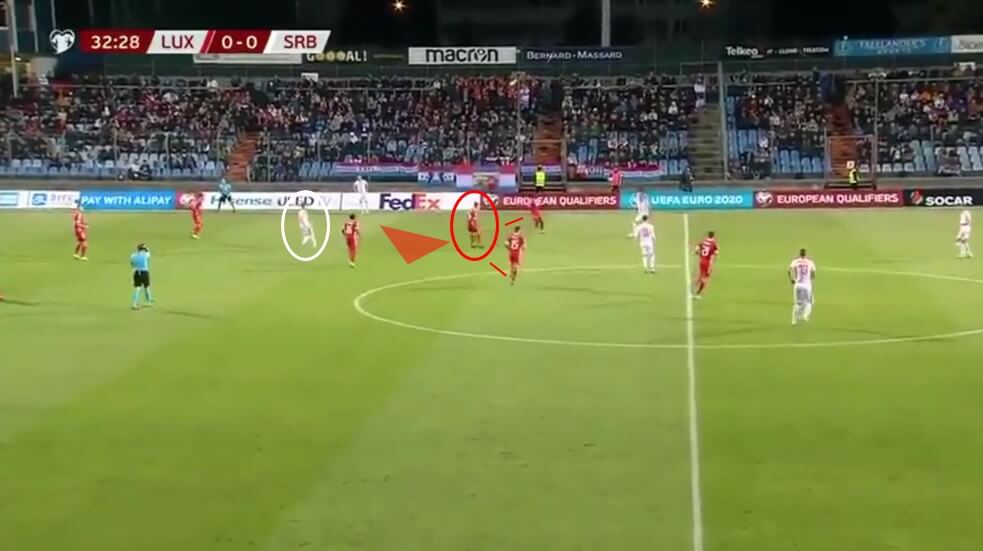 Again, above Serbia have the ball probing, however, one of their players is present in a pocket of space with potential to threaten the goal upon receiving on the half-turn. Whilst minor, Sinani makes an adjustment to cut it off and the danger has been extinguished.

These defensive movements may seem insignificant but they portray Sinani having some awareness about effective defensive positioning. Buendia has become a valuable defensive tool, in addition to his offensive output, under Daniel Farke’s tutelage. Farke will hope Sinani can follow a path like the Spaniard.

To conclude, I believe the signs are promising for Norwich’s new acquisition. When watching him, his technical ability was superior to that of his Dudelange teammates. Farke’s demanding tactics will test that properly and it will be interesting to see whether he can handle the physicality of England. However, his performances thus far are encouraging and the free transfer deal to bring him is low risk, but potentially with high reward.