Before we show you Scott’s solution, let’s remind ourselves of the challenge he was posed.

Congratulations, you have made it to the next round of the UEFA Champions League where you are set to face Thomas Tuchel's PSG.

With a bumper UEFA Champions League tie against French heavyweights Paris Saint-Germain (PSG) coming up, my team has been hamstrung by having most of the first-team squad being sold during the January window. We have been only allowed to sign players over the age of 32 as replacements, to aid and reinforce the remaining first-team players at the club. Having brought in some quality replacements, we go into this tie having honed our tactics on the training field, and with our analysis having given us the optimal tactical system to get past Thomas Tuchel’s PSG side. 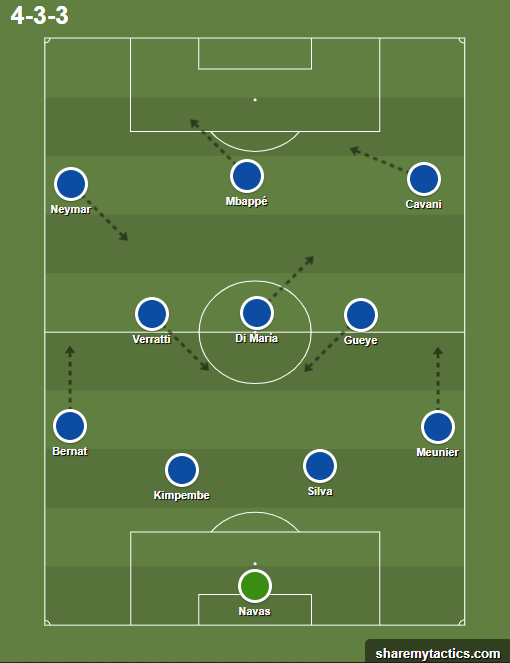 Thomas Tuchel has experimented with four dynamic, high attackers in PSG’s most recent games. Neymar plays left-forward but looks to drop deeper into the left-half space while Di María moves higher into the right-half space. Verratti and Gueye form a double pivot almost to create a box midfield with Neymar and Di María. As they push into the half-spaces, you’ll see Bernat and Meunier pushing high into the wings to provide attacking width. Mbappé and Cavani will attempt to push our back three closer to goal to create space for Neymar and Di María to create from the half-spaces. 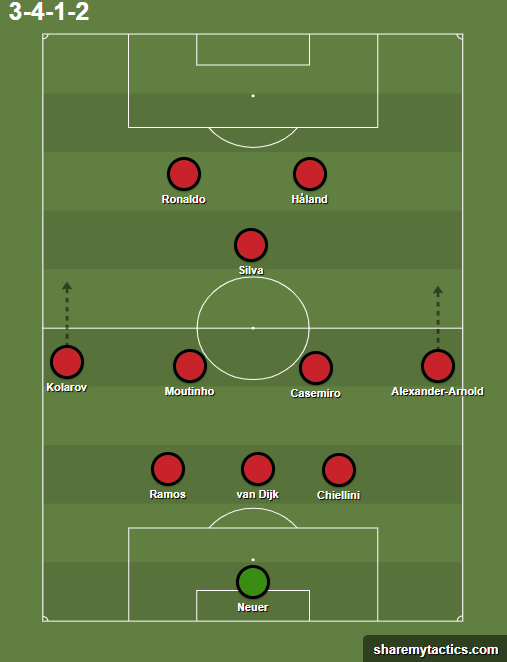 My top two priorities when as I determined my squad were guaranteeing my side remained plus one at the back against Mbappé and Cavani. A double pivot will look to limit Neymar and Di María’s playmaking ability from the half-spaces. With those two contained by arguably the game’s top defensive midfielder and one of the best two-way midfielders in the 33+ age bracket, PSG will have to be more aggressive in pushing their outside-backs, possibly their holding mids as well, to support the attack. I’ll use the attacking prowess of Alexander-Arnold and Kolarov to get behind them and send quality services to Ronaldo and Håland through a variety of deliveries. Also, I’ve picked a squad that will negate PSG’s set pieces, a major strength for them, and actually shift that advantage in our favour.

Our primary defensive principles are to defend in three of the five vertical channels, maintain a plus one at the back and deny entry to Neymar and Di María in the half-spaces. Those tactics will allow us to clog the middle, eliminating easy entry to PSG’s playmakers in their preferred areas of the pitch. That will in turn force PSG to move its outside-backs higher up the pitch to support the build-up. That’s exactly what we want, as I’ll explain in greater detail further down the analysis. My side is set up to dictate play through defence. PSG will struggle to create meaningful chances since we are occupying their preferred attacking zones. 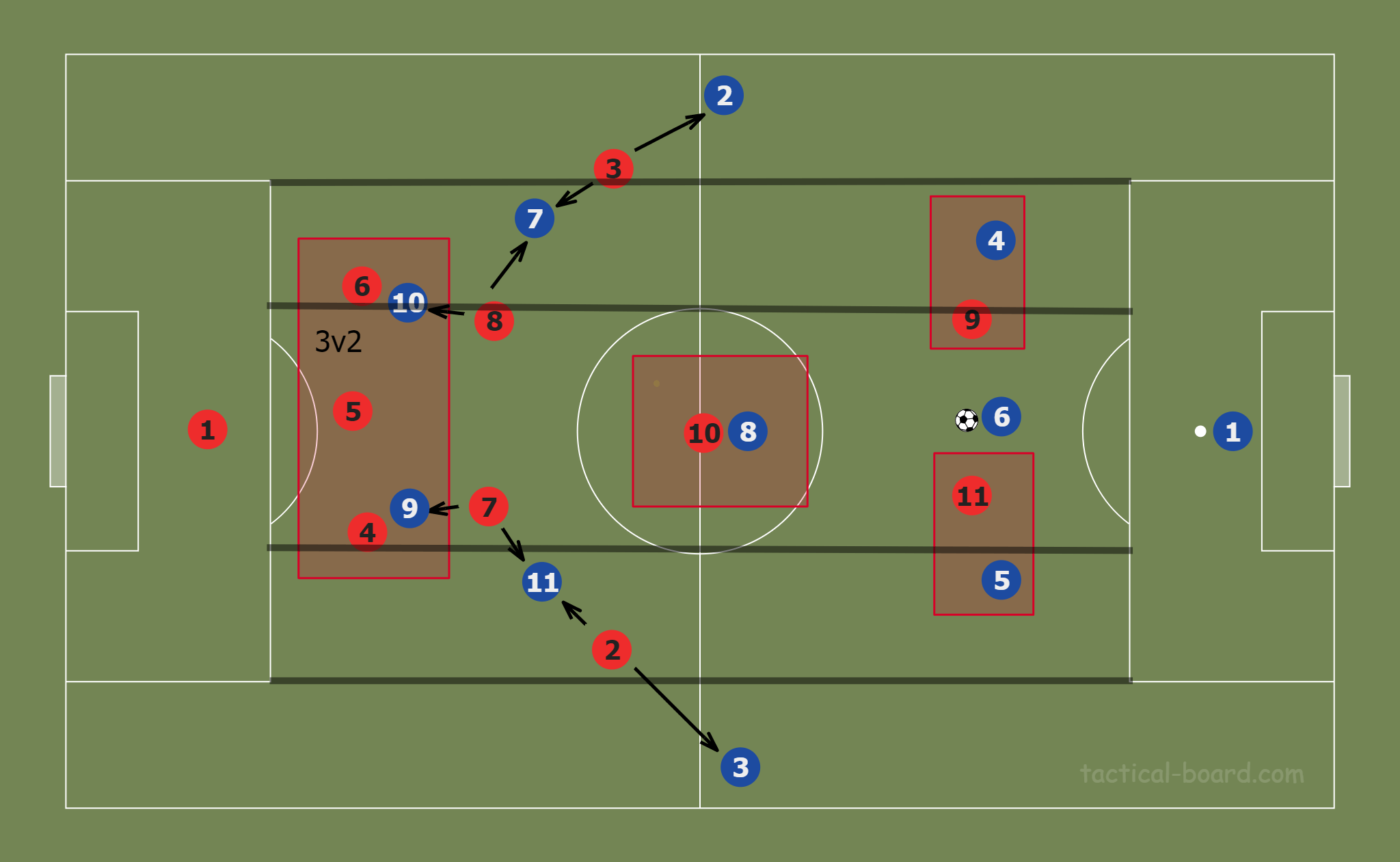 As PSG build-out of the back, they’ll likely need to pull a holding mid back to assist the build-up. Verratti (6) is the likely candidate. As he drops in line with his centre-backs, the two forwards will be tasked with getting with to play forward from a deep position while cutting off his lateral options. Silva (10) is tasked with taking away the short pass to Gueye. Meanwhile, my back-three and two holding mids will take away the middle, leaving the wide outlets with space. I want Verratti playing his pass to the wings. 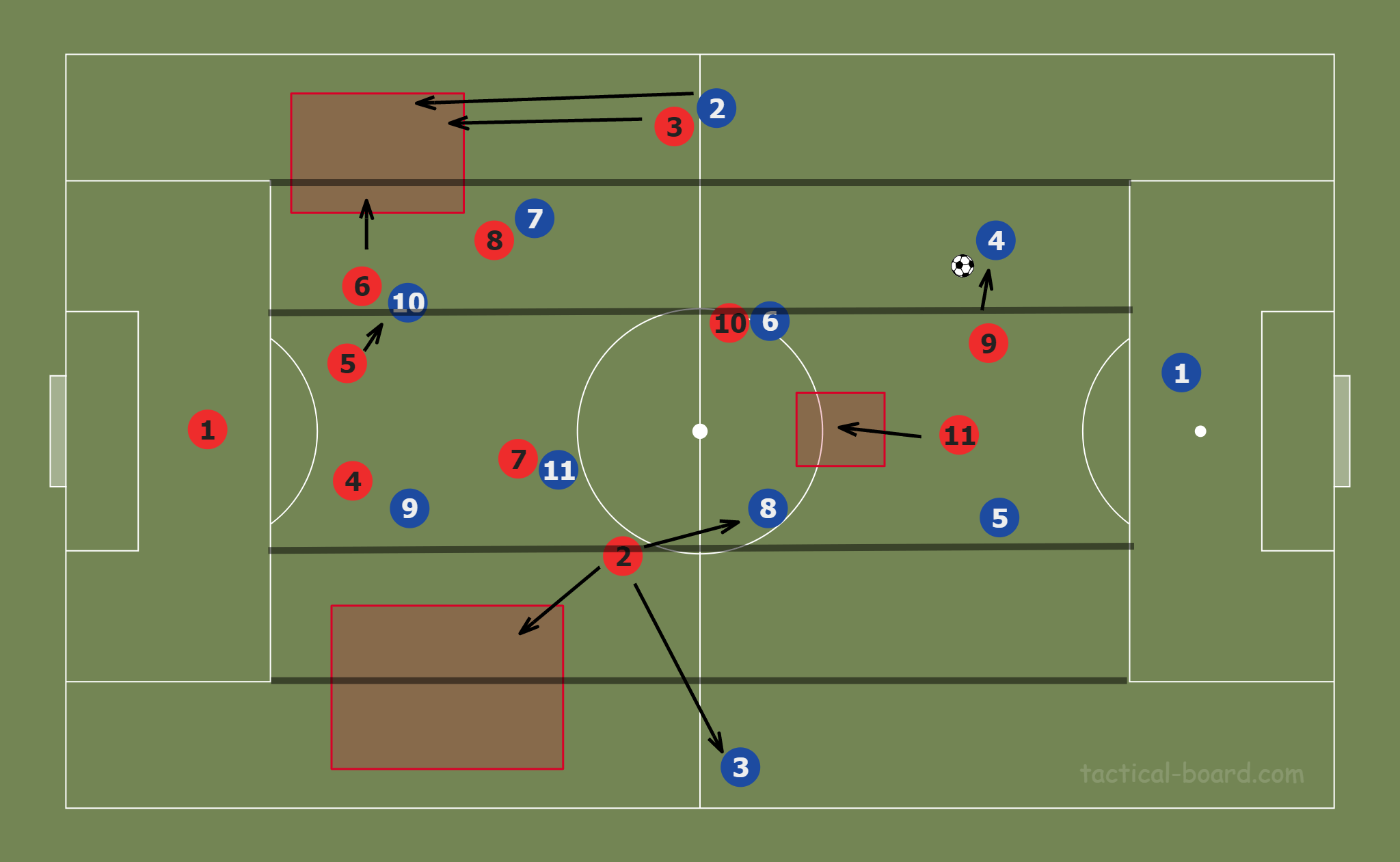 If PSG attempts to build out with just the two centre-backs, we’ll press them into a hurried distribution up the pitch. The nearer of my two forwards will press while the other drops deeper to cut off the passing lane to the holding mids. In this example, I have my far-sided wingback, Alexander-Arnold (2), prepared to move forward to press an entry pass to the holding midfielder. He’s also well-positioned to move backwards or to the wing if PSG attempts the long switch of play, which I wouldn’t encourage. 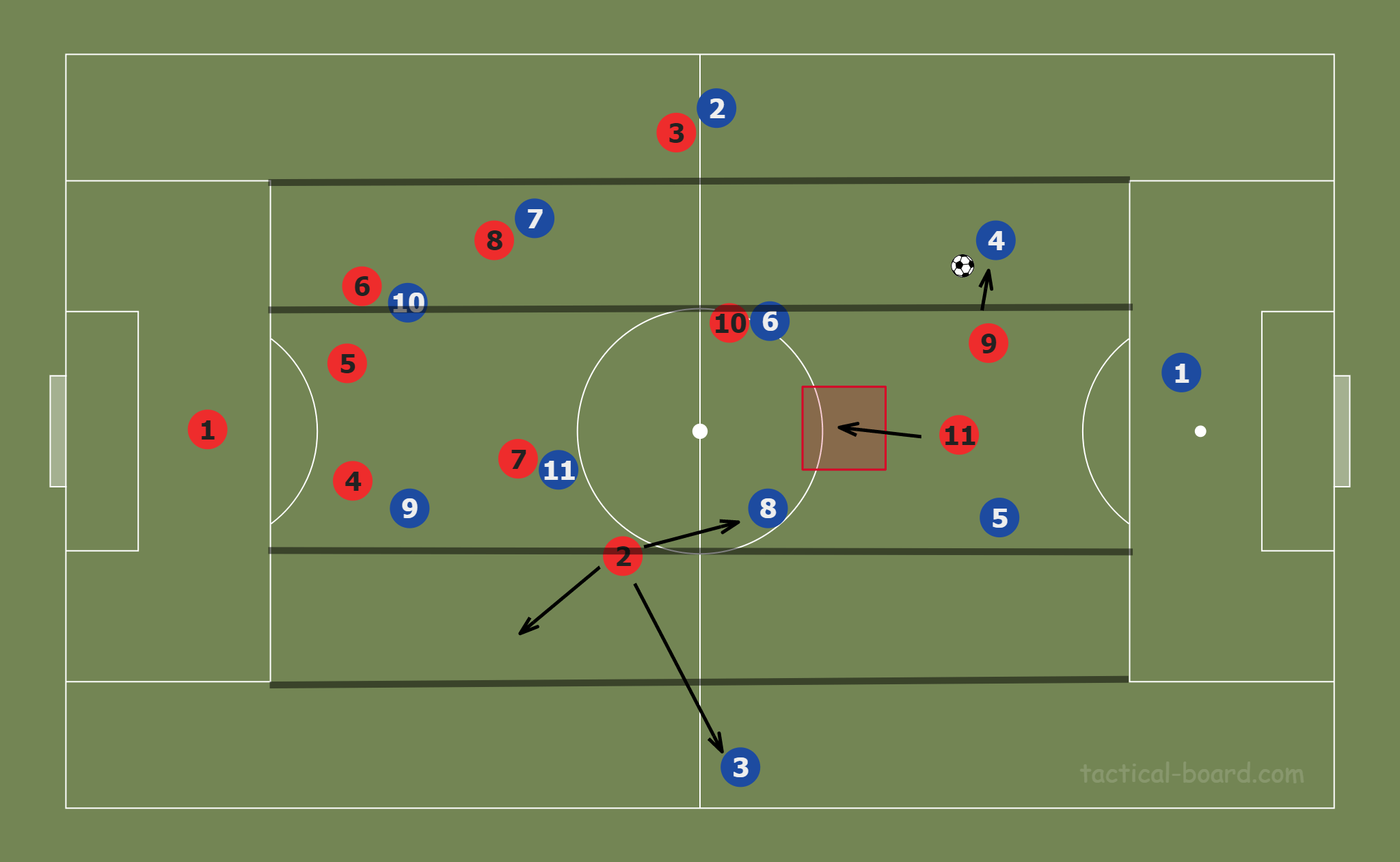 On the near-side, Ramos (6) offers cover in the wing with van Dijk (5) prepared to switch off on Cavani (10). Kolarov (3) must keep Meunier (2) in front of him and be prepared to protect the space in behind. 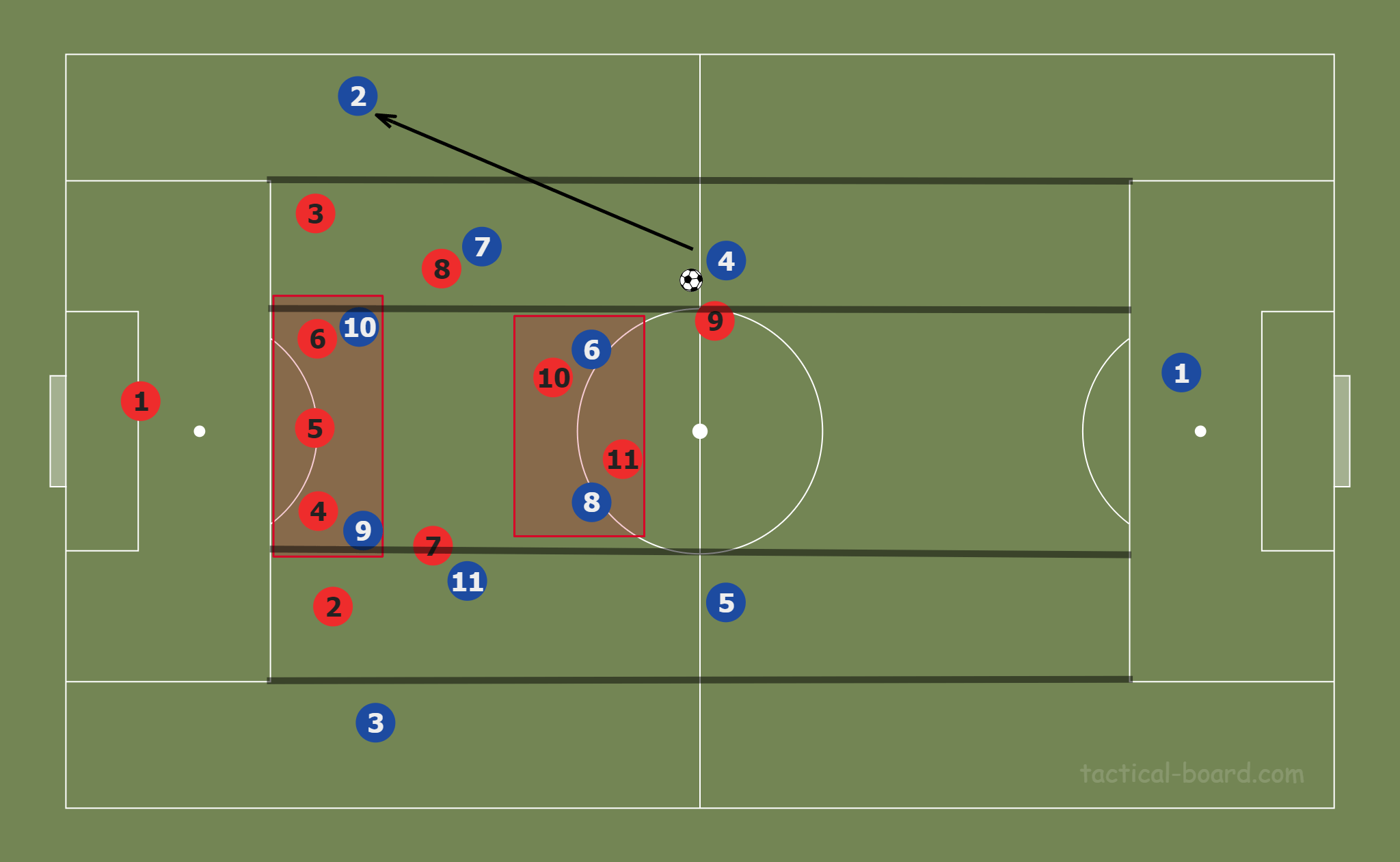 As PSG enter our half of the pitch, we’ll encourage them to settle into an expansive attacking shape. I want the two outside-backs in line with their forwards, or at least as close as possible. That will open up a ton of space on the wings. The holding mids are the ones who cover for the outside-backs. Plus, with Neymar and Di María as the first line of defence in the centre, we’ll easily bypass their line. As we defend, we’re setting up our counterattack. Allowing them to progress into our half through the wings will directly lead into our attack. 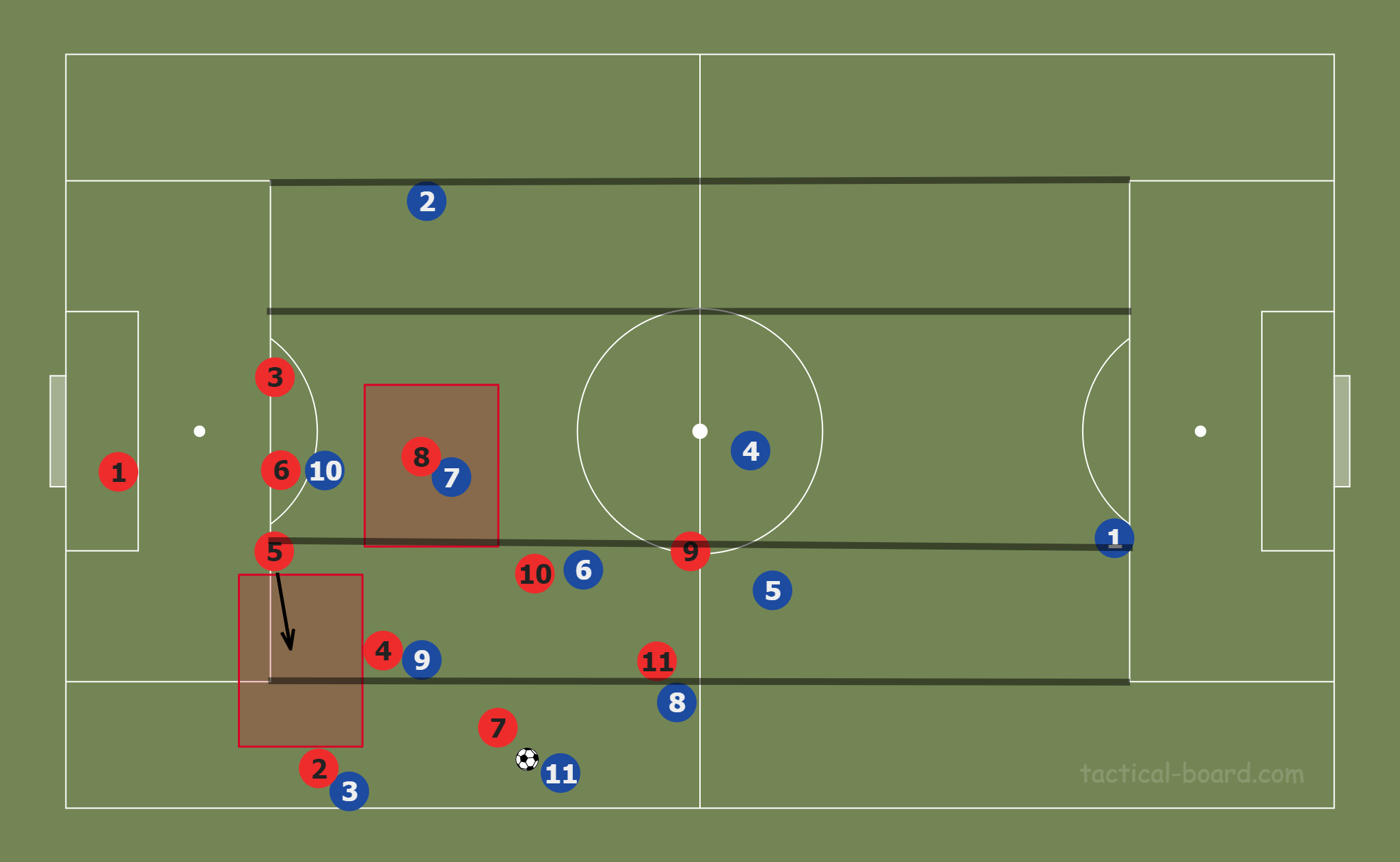 One thing I’ve noticed is that PSG overloads near the ball as they enter the attacking third. Sticking with our principle of defending in three vertical channels, we will match them player-for-player with van Dijk (5) covering the half-space gap. Also, maybe more importantly, we will always have the far-sided midfielder, Di María (7) in this case, marked. That far-sided midfielder is tasked with finding a pocket of space in the central channel then playing a through ball to one of the forwards of sending the ball wide to the outside-back. Casemiro (7) and Moutinho (8) are directly responsible for cutting out the pass to the creatives. If we can keep Neymar and Di María off the ball, Mbappé and Cavani will lack the necessary services into the box.

With our pace up top, attacking wingers and Silva’s creativity as our 10, we’ll look to defend in our half to allow PSG’s attack to reach maximum expansiveness. Once that happens, we’ve identified areas of significant vulnerability that even the minnows of Ligue 1 have taken advantage of. With the quality on this team, I’m confident we’ll take advantage of PSG’s ultra-aggressive attack with lethal counterattacks of our own. 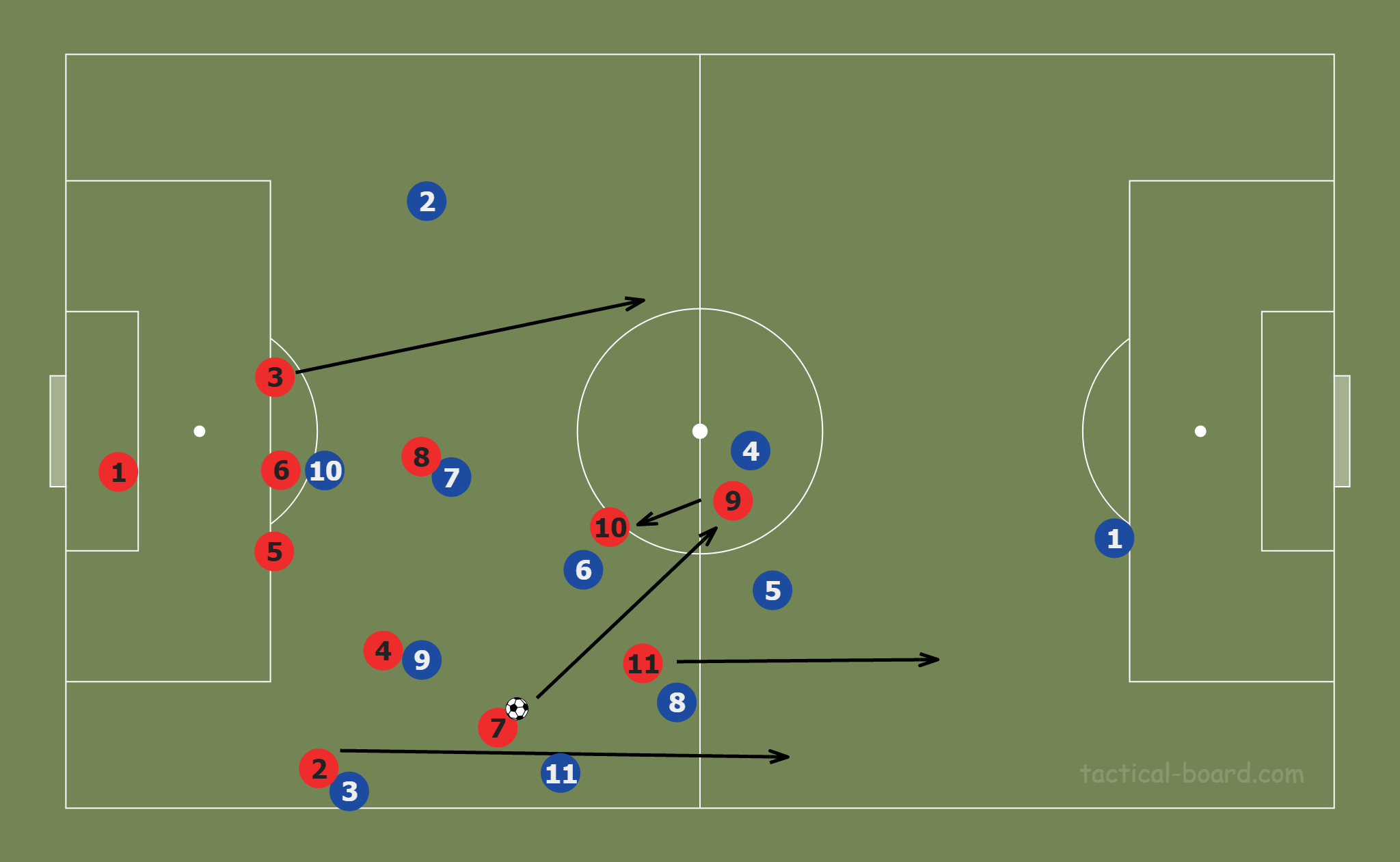 As I mentioned, we will defend with an eye towards attacking. Following from the previous image, let’s imagine Casemiro (7) has taken the ball off Neymar. I want him, and anyone making a recovery, to immediately play forward if possible. In this case, he plays the Ronaldo (9). Immediately following the recovery, Silva (10) will make his run between the lines. Ronaldo (9) sets to him and allows Silva to use his playmaking intelligence to determine the next course of action, be it a switch of play, through ball to the second forward, Håland (11) in this instance, or into the wings for Alexander-Arnold. 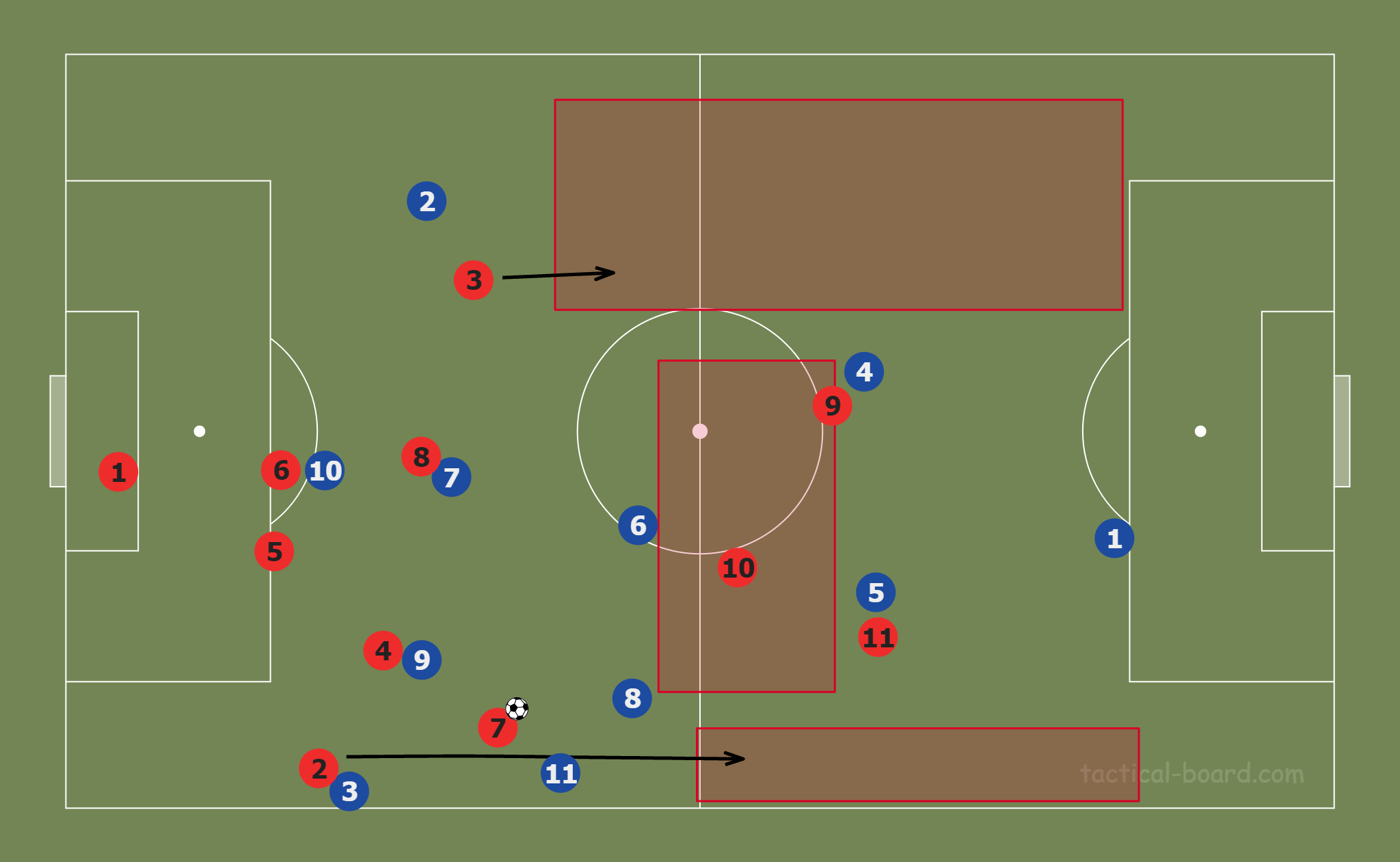 Once the forwards set to Silva (10), I want them to stretch the field by driving the PSG centre-backs towards goal. Their objective is to disconnect the centre-backs from their holding mids, creating more space for Silva (10). While PSG focuses their attention on the central channel, we’ll look to get Alexander-Arnold (2) and Kolarov (3) behind Bernat (3) and Meunier (2) respectively. Those three highlighted areas represent optimal areas to progress against this ultra-aggressive PSG attack.

Our attack is predicated on PSG overcommitting in attack, then using the wings the large space between the defensive and midfield lines to progress. However, we also have the talent to break their lines with possession-based attacks. PSG presses high up the pitch and are very talented in this area, but our numerical superiority will force their outside-backs and holding mids higher up the pitch. We’ll target those movements as we possess. 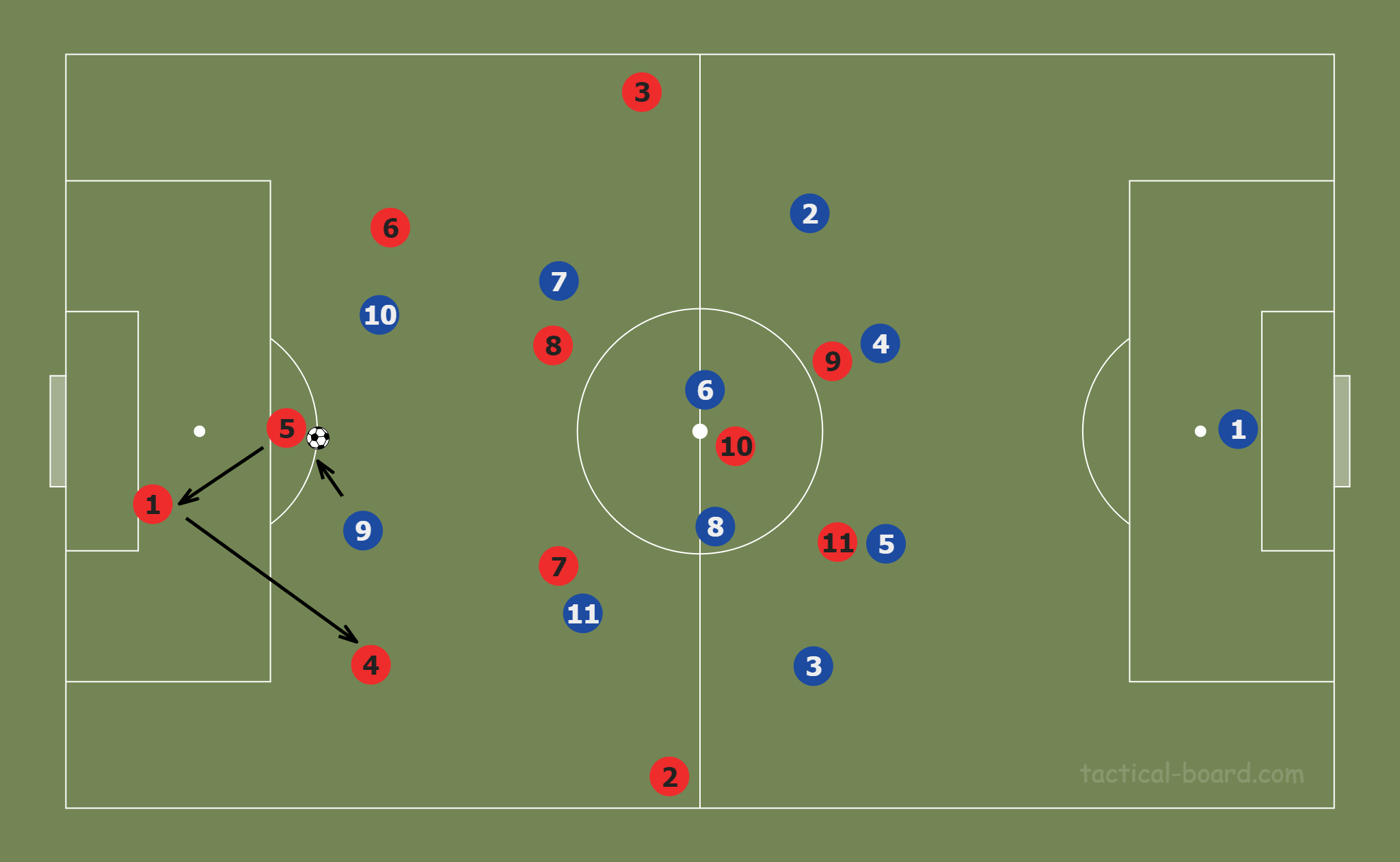 Though we will primarily look to preserve our legs and counter-attack, we also have more than enough talent to build from the back and connect our lines. In a scenario where van Dijk (5) and the other centre-backs are leading the build-up, we’ll use Neuer’s passing ability to develop the attack and break the first line of pressure. 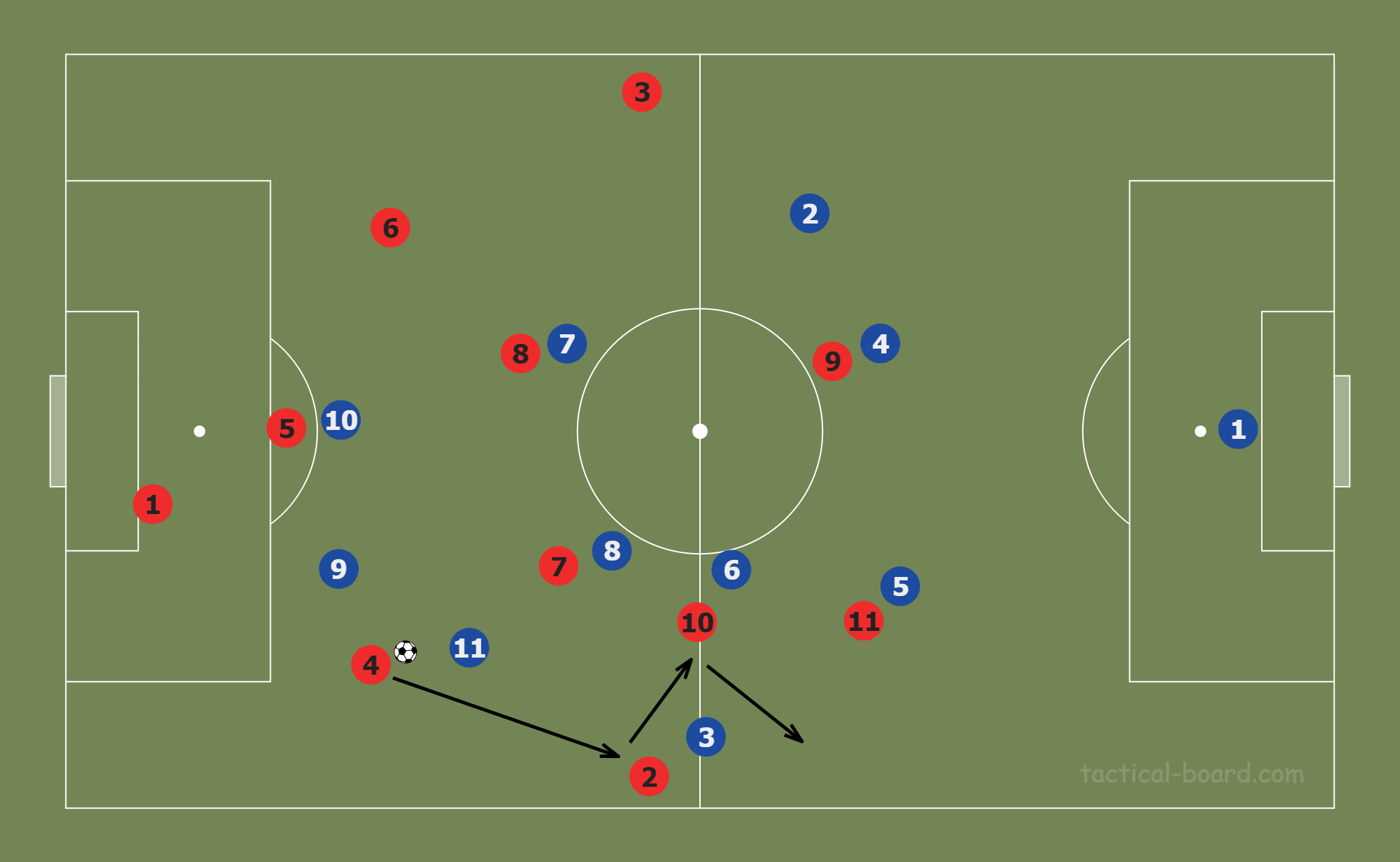 That will force PSG to commit the outside-midfielders higher up the pitch. My players can then look to break PSG down with quick combinations on the wing, drawing the PSG outside-backs high up the wings, leaving the space behind them vulnerable. 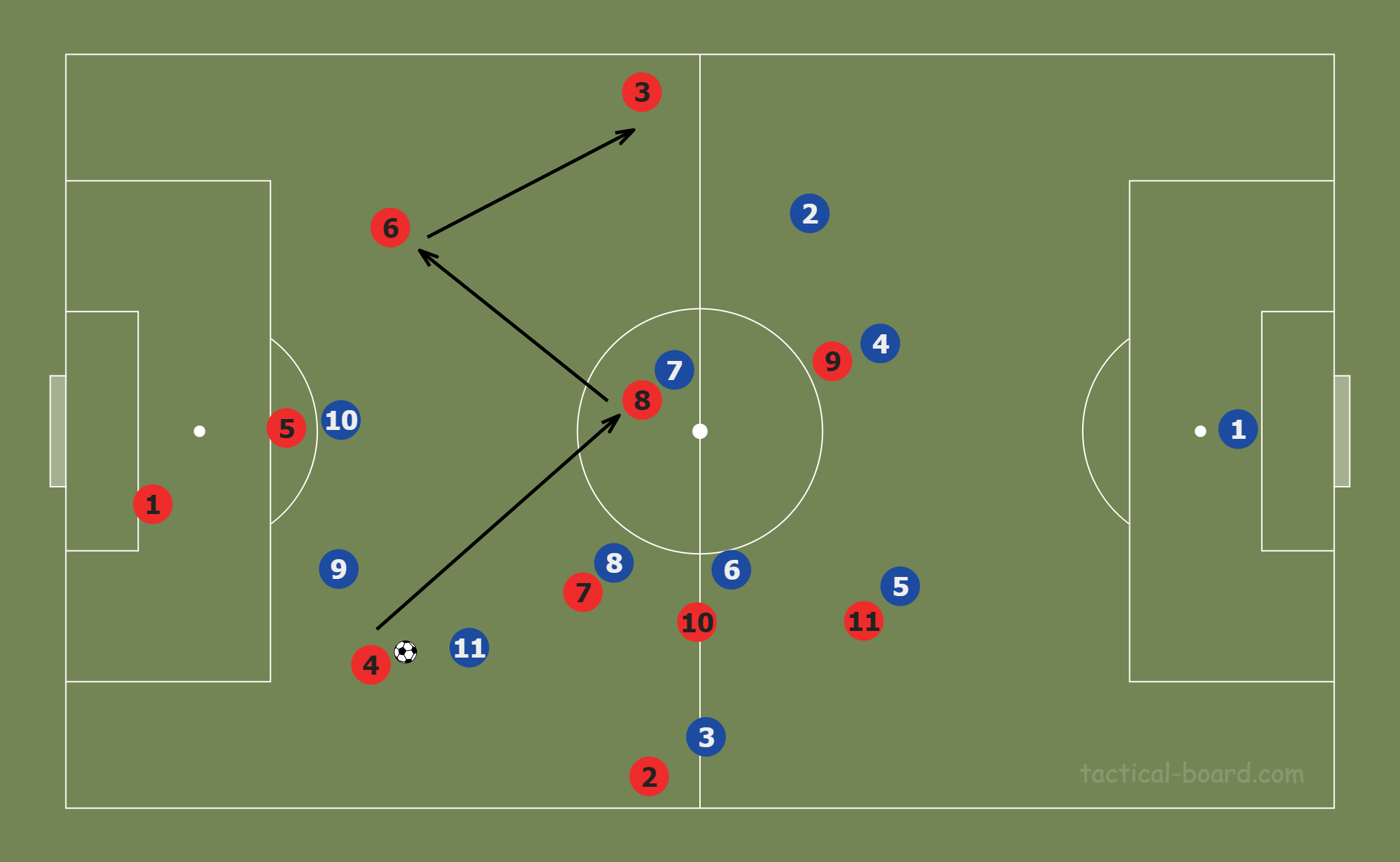 We can also move our holding mids higher up the pitch, then have then drop in to facilitate the switch of play through the far-sided centre-back, who could then look to play his winger into space. 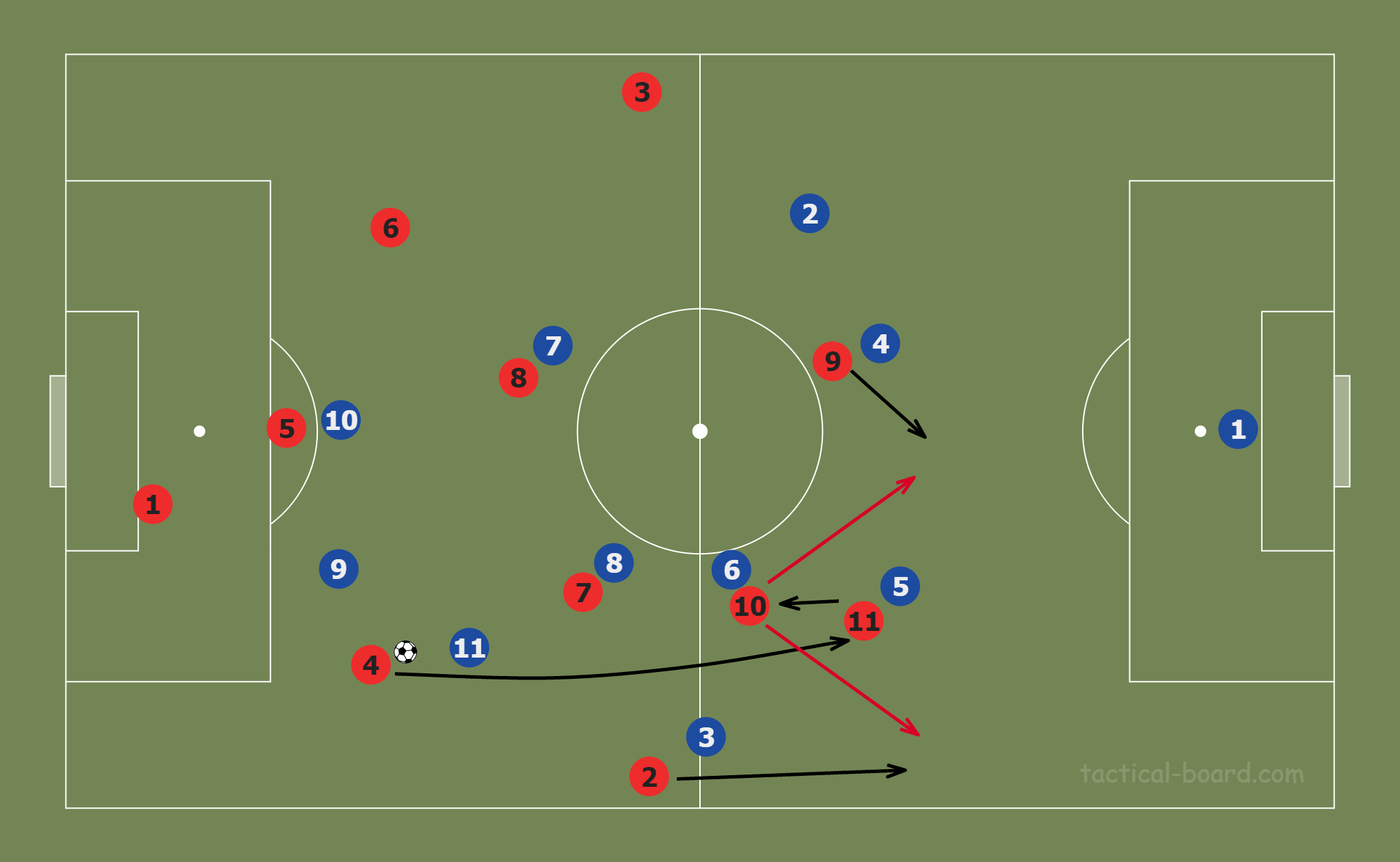 With Ronaldo (9) and Håland (11) up top, we can also look to play more directly, playing the first pass to the high target and setting to Silva (10). From there, he will have the option of playing through the defence or playing to our winger. 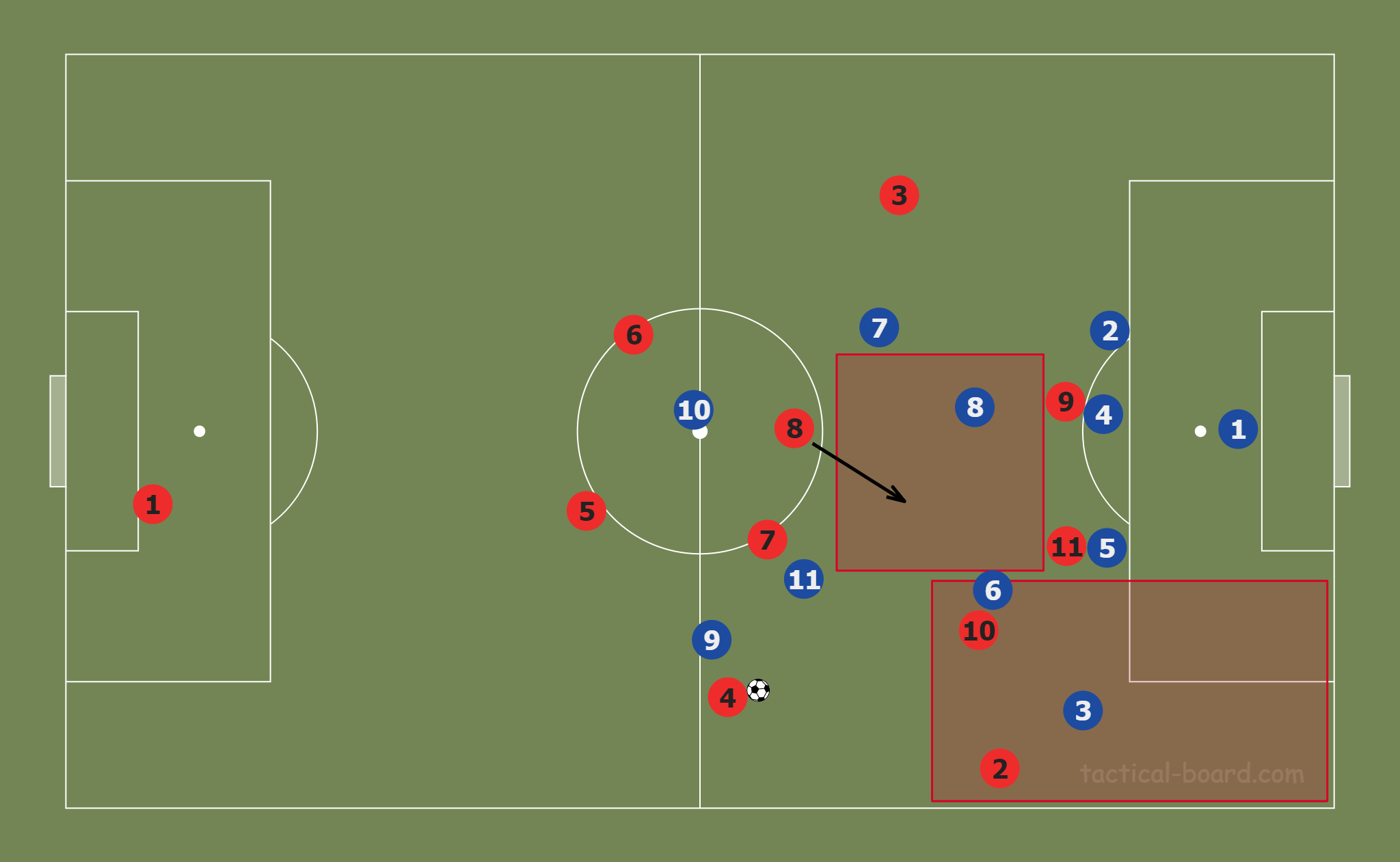 As we progress into the attacking half of the pitch, we will target 2v2 scenarios out wide with the confidence that our attackers have a qualitative advantage over the PSG defence. We’ll also look for our far-sided holding midfielder to look for opportunities to take advantage of spaces that open up in the central channel. Once he receives there, he’ll look to take advantage of our numbers and quality centrally. 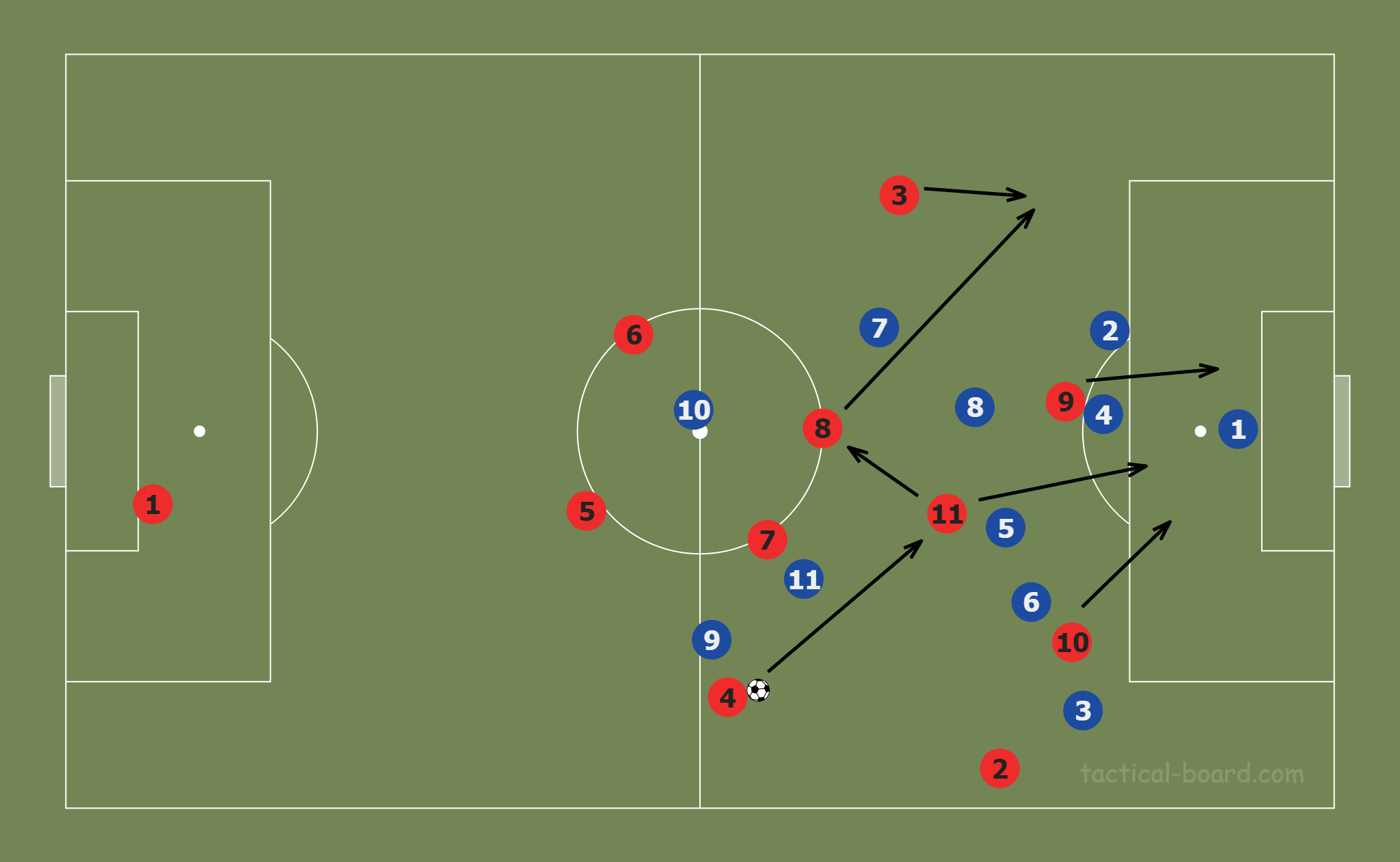 Finally, if we look to switch play to the far-sided outside-back, we have two extraordinary crossers of the ball and two massive targets up top who have a history of success against this PSG backline. We’ll get Ronaldo (9) and Håland (11) plenty of services.

Our transitions to defence are fairly standard. We’ll counter-press to either win the ball back immediately or force PSG to play backward so that we can get our defensive shape. We want to deny an immediate pass to Mbappé and Cavani. Whoever is nearest the ball will press right away. If the odds of achieving one of our two objectives is unlikely, we’ll gladly take the foul and reset defensively. 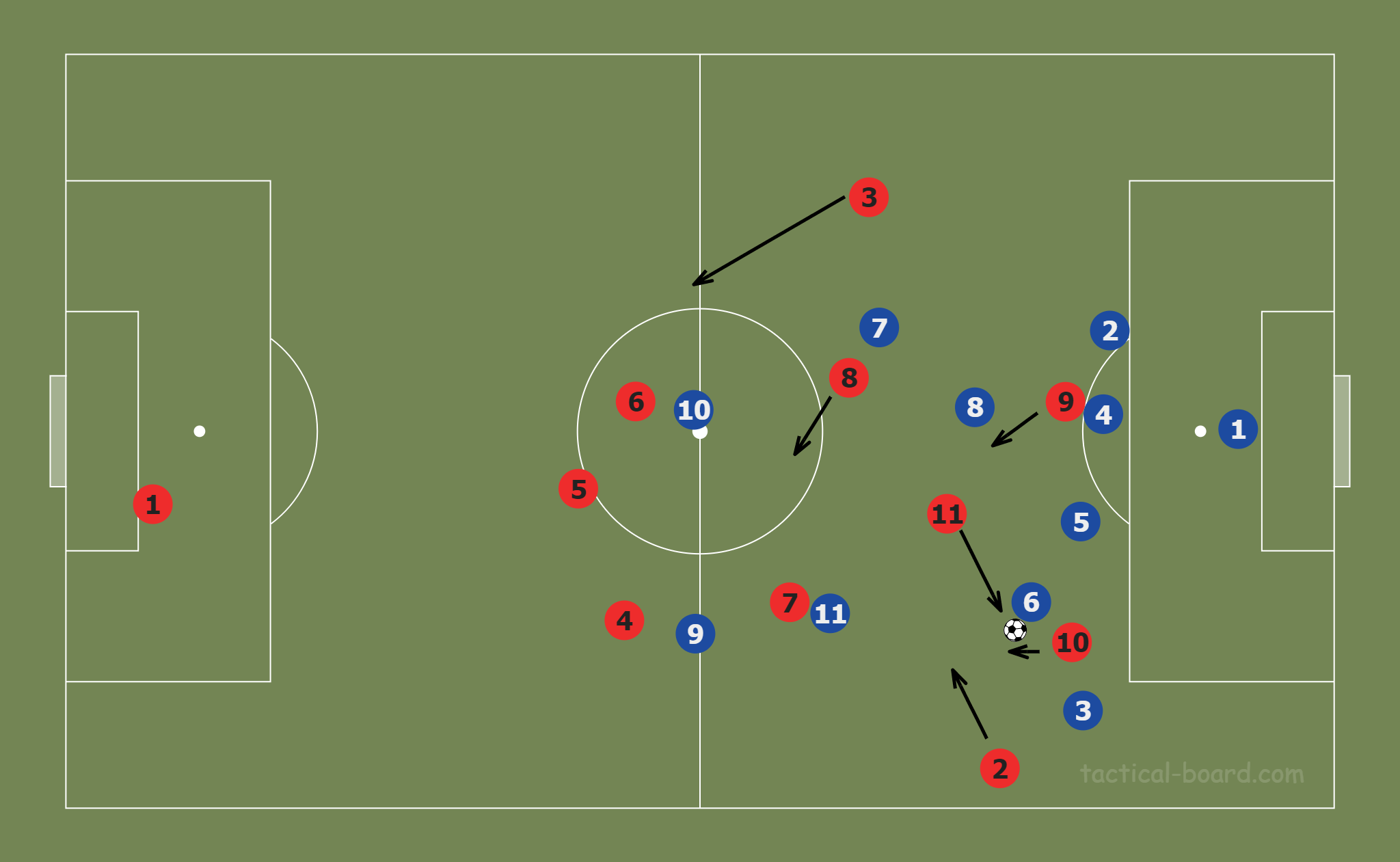 Here you see Silva (10) and Håland (11) pressing while Alexander-Arnold (2) drops and makes the field more compact. Moutinho (8) recovers centrally to deny entry to Cavani (10) Ronaldo (9) drops in the midfield to take away the other holding mid and Kolarov retreats to join his backline.

Our set up and quality at the back will give us a lot of freedom against this defensively venerable PSG side. Watching them play and engaging in tactical analysis has shown me that they are prone to excessive aggression as they attack. My veteran squad has the talent to keep their attack at bay, as well as find the vulnerabilities in their defence. Young attackers like Alexander-Arnold and Håland offer a level of explosive playmaking ability that PSG is simply not equipped to handle. Add in Cristiano Ronaldo’s knack for UEFA Champions League knockout round goals and I’m confident that my tactics wars side can get a result against this unbalanced PSG side.