Last season was one that many would consider a fairytale for Royale Union Saint-Gilloise. After a tremendous first season back in the top flight, they are in the Champions League qualifying rounds for this season. One player that was key to USG’s success last season was Danish midfielder, Casper Nielsen. Nielsen was a consistent performer in the heart of Felice Mazzu’s midfield, with his performances even attracting the interest of Danish national team manager Kasper Hjulmand. This led to Nielsen’s receiving his first cap for his country, a moment he surely will never forget.

Now, after a protracted transfer saga, Nielsen finally has gotten his long-rumoured transfer to Belgian champions Club Brugge, with the Dane becoming the latest addition to new manager Carl Hoefkens squad. This tactical analysis and scout report will look more in-depth at Nielsen, as well as what strengths he brings to Club Brugge’s midfield. 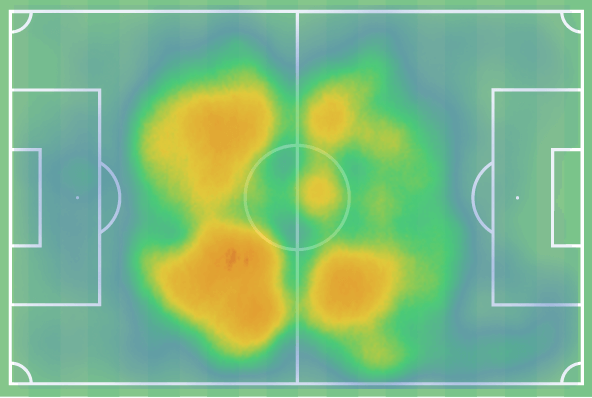 The above shows Casper Nielsen’s heat map from last season with USG. As it illustrates, the Danish midfielder stuck to his position in the middle thirds of the pitch, never drifting too far forward or too far back. Nielsen formed a great midfield partnership with Malta international Teddy Teuma, with their performances the reason Union were solid in midfield.

At Club Brugge, Nielsen will likely be partnering one of either Hans Vanaken or Ruud Vormer in midfield, with it probably Nielsen will become a starter under new manager Hoefkens, who became manager this summer after Alfred Schreuder left to take over at Ajax following Erik ten Hag’s departure to Manchester United. The following sections will take a deeper dive into the strengths that Casper Nielsen possesses.

One of the key strengths that Casper Nielsen possesses is his vision and ability when it comes to passing. Last season with USG, Nielsen attempted 30.44 passes per 90 minutes, with a success rate of 75.9%. Looking a bit deeper into these statistics, however, shows that what Nielsen does best is his long passing ability. With USG last campaign, the Dane attempted 5.11 long passes per 90 minutes, completing over half of them (52.2% to be exact). Nielsen also likes to pass to the final third, he had a 67.6% success rate last season while attempting 6.71 passes to the final third per 90 minutes. Following are some examples of Nielsen’s passing ability. 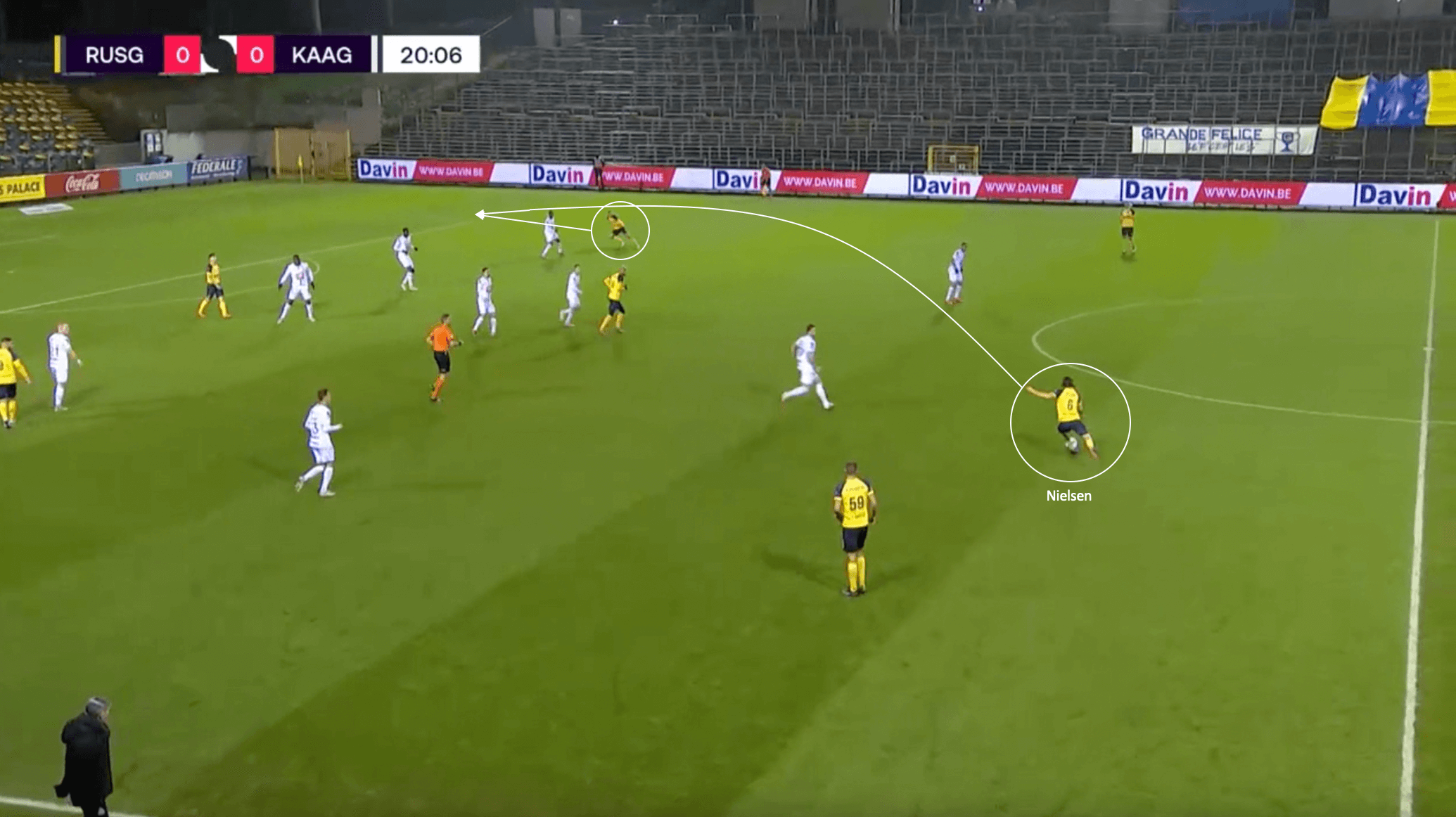 As mentioned, the long passing ability of Casper Nielsen is probably the strongest subset of his ability on the ball. The above shows an example of him using his vision as well as his long passing ability to pick out the forward on the far side of the pitch. With no Gent defenders looking to close Nielsen down, the Dane is able to take his time and pick out the right pass. He then notices the forward making the run on the blind side of the defender and plays a perfectly weighted pass into the attacker’s feet in behind. Even though the chance, unfortunately, goes begging, Nielsen was able to bypass the entire opposition defence with one clinical pass over the top. 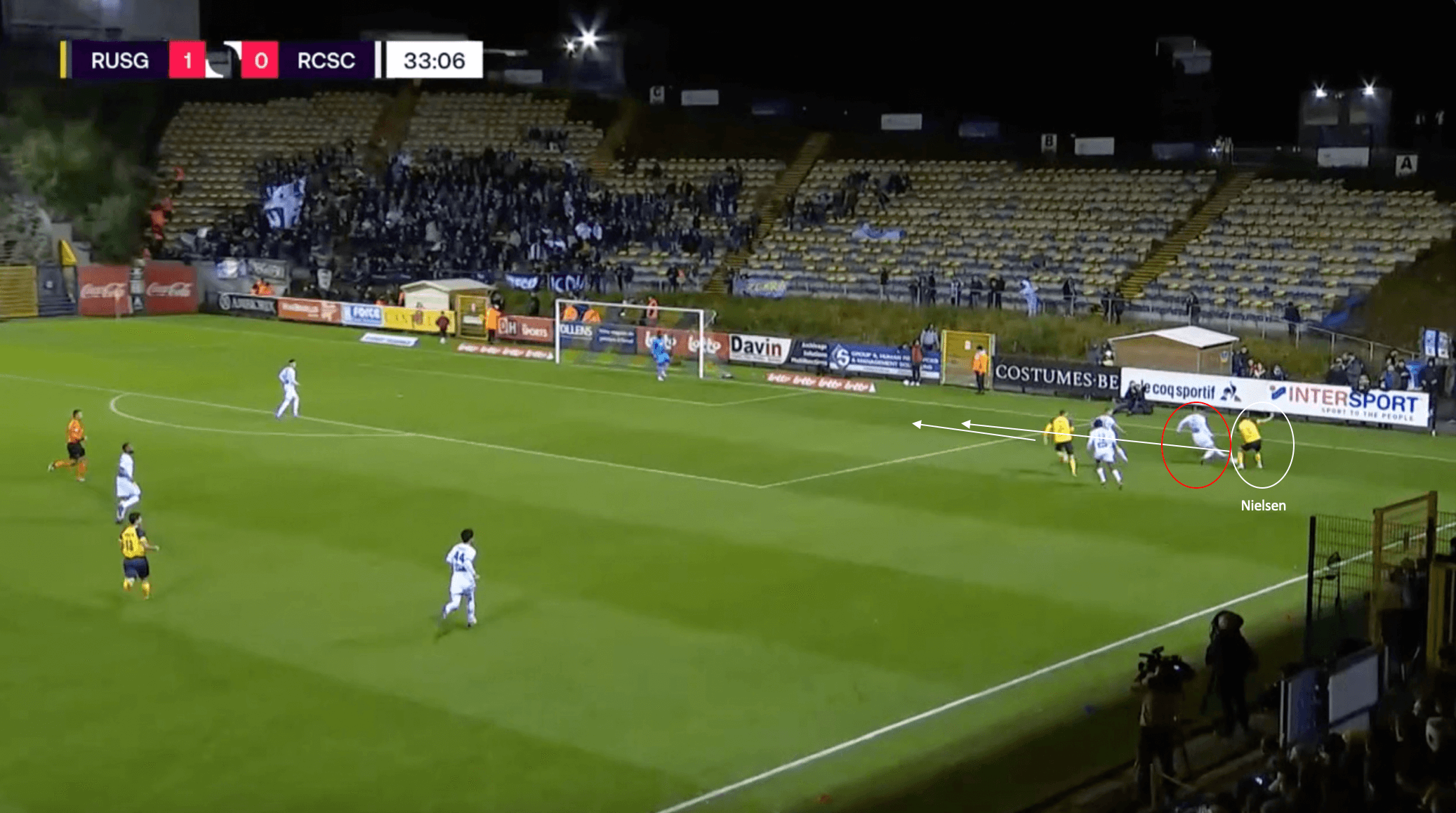 The image above illustrates another good example of the vision that Casper Nielsen possesses when on the ball. Preceding this image, Nielsen was in possession driving towards the penalty box before being forced wide towards the touchline. He is closed down quickly by two opposition players but is able to quickly notice his teammate making an unmarked run into the penalty box. As a result, Nielsen is able to use this vision and passing quality to get the ball out from under him and into the path of his teammate.

Even though Nielsen was off balance, he was still able to play an absolutely perfect ball through the three opposition defenders, with the attacker scoring as a result and Nielsen getting an assist. 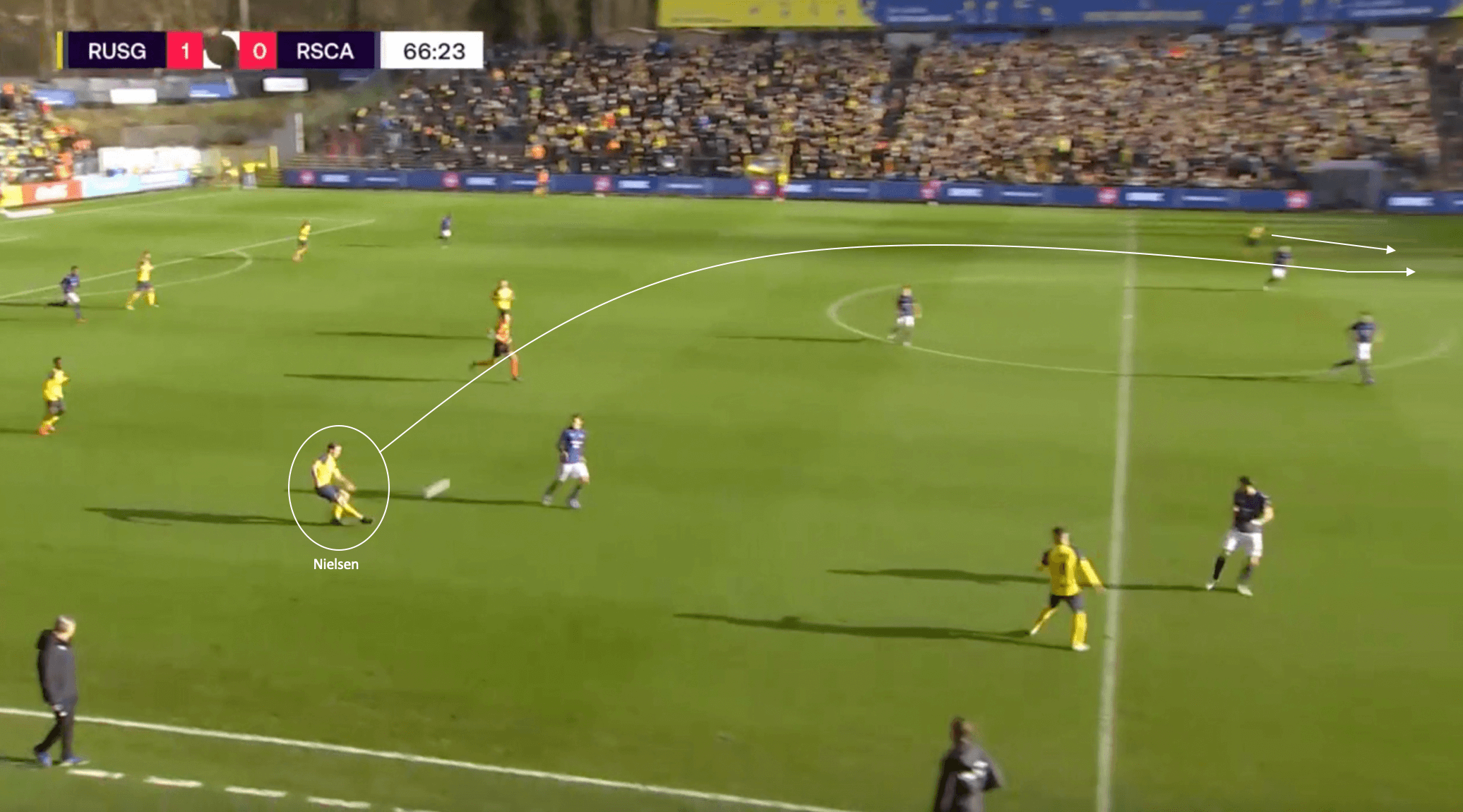 Fast break counter-attacking situations is another area where Nielsen is able to use his passing ability to exploit opposition defences. Preceding this image above, USG had just won possession back in their defensive third, allowing a counterattacking sequence to start.

Due to the Dane’s ability on the ball, he is able to catch the Anderlecht defence out, playing a ball over the top into the feet of the attacker running in behind. Unfortunately, the attacker takes a heavy touch, allowing the goalkeeper to come out of his area to claim. Even though this phase of play did not end the way USG would have hoped, it shows the quality that Nielsen possesses with his passing range, as well as vision, in these moments.

When it comes to his ability on the ball, Casper Nielsen looks a good fit for the type of midfielder that Club Brugge like to have in a deeper midfield position. With Ruud Vormer reaching the twilight of his career, it looks like, in regards to passing quality and vision, Nielsen will be a good long-term replacement for the Dutchman.

While Nielsen is not a midfielder that will constantly look to get himself involved in the attacking areas of the pitch, that does not mean he won’t. Last season was Nielsen’s best goal-scoring season as a professional, with seven goals. The majority of these goals have come from distance as well. This section will take a closer look at the types of shots that Casper Nielsen likes to take on as well as the quality that he possesses when shooting from range. 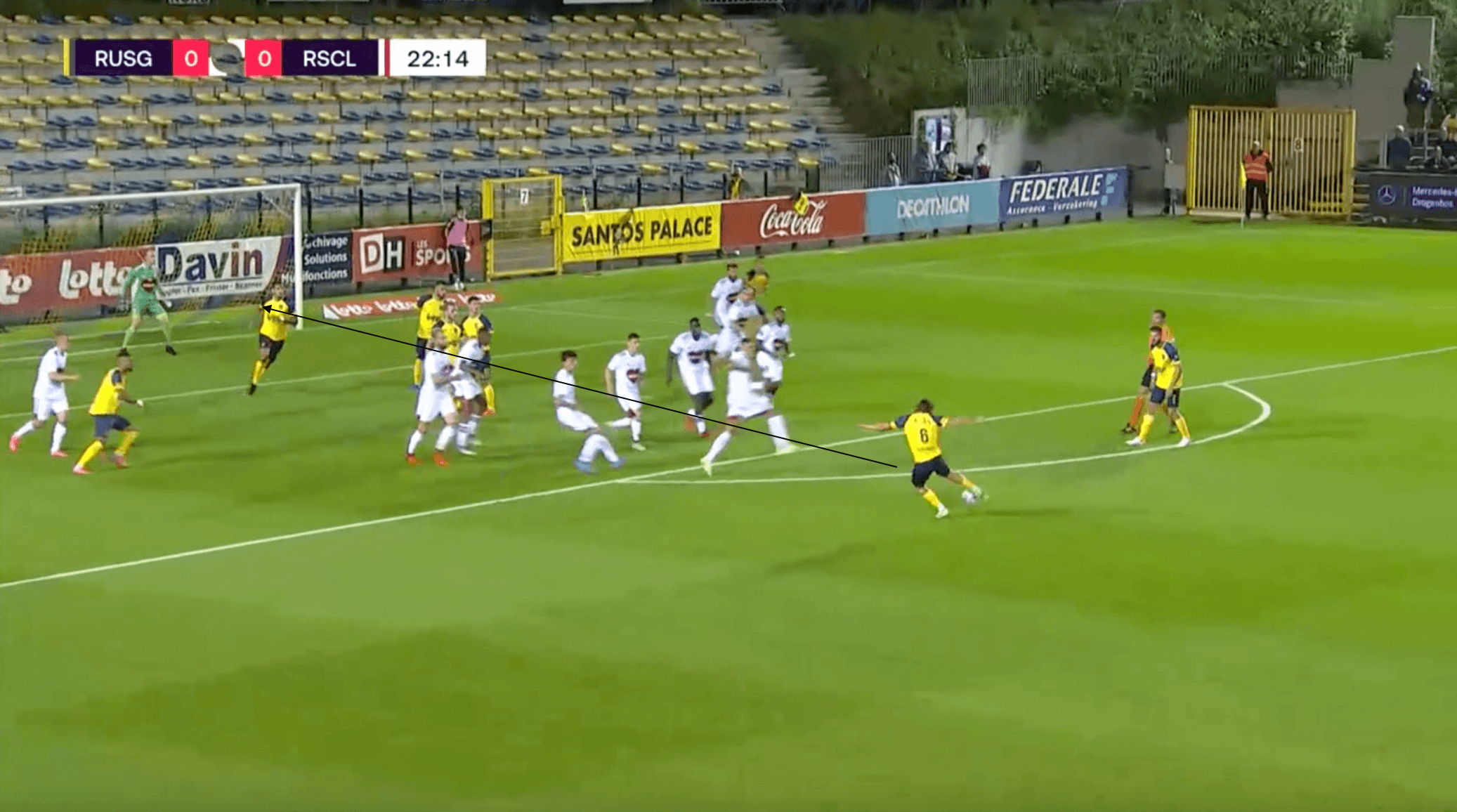 The above shows an example of Nielsen’s shooting from distance. After his initial free kick was hit into the wall, the ensuing shot he takes is a rocket, pinpoint and accurate through all the bodies and into the bottom corner of the goal, giving the goalkeeper absolutely no chance to save it. From range, Casper Nielsen is dangerous if allowed the time and space to take a shot. 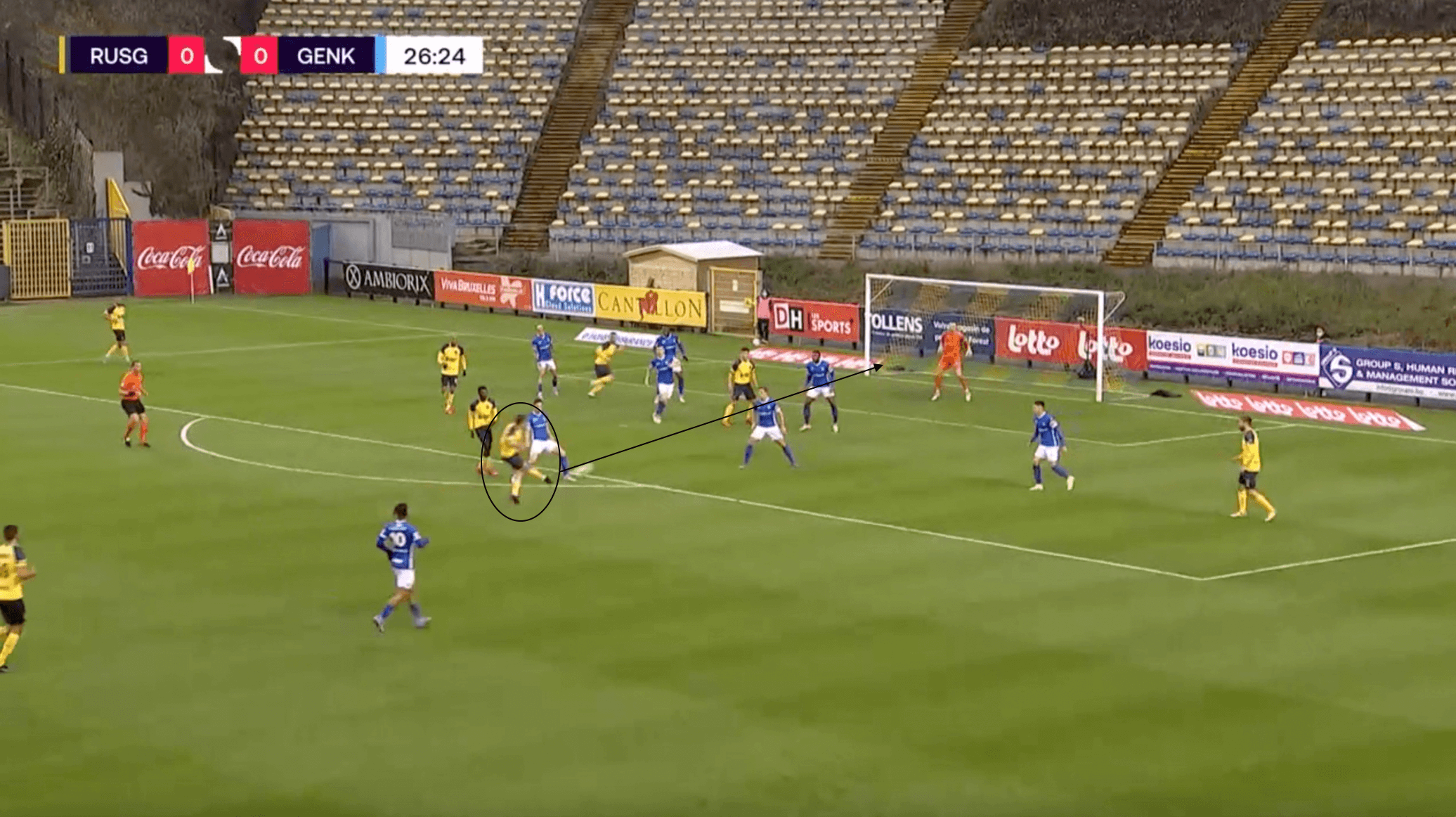 The image above shows another example of what Casper Nielsen is capable of if the ball falls to him on the edge of the penalty box. The USG player passed the ball into the space centrally from a wide area, which allowed Nielsen to run onto the ball from a deeper central position. The Dane has the composure and technique to shoot first-time, with the shot being perfectly placed into the bottom corner, giving the goalkeeper once again no chance to save it. 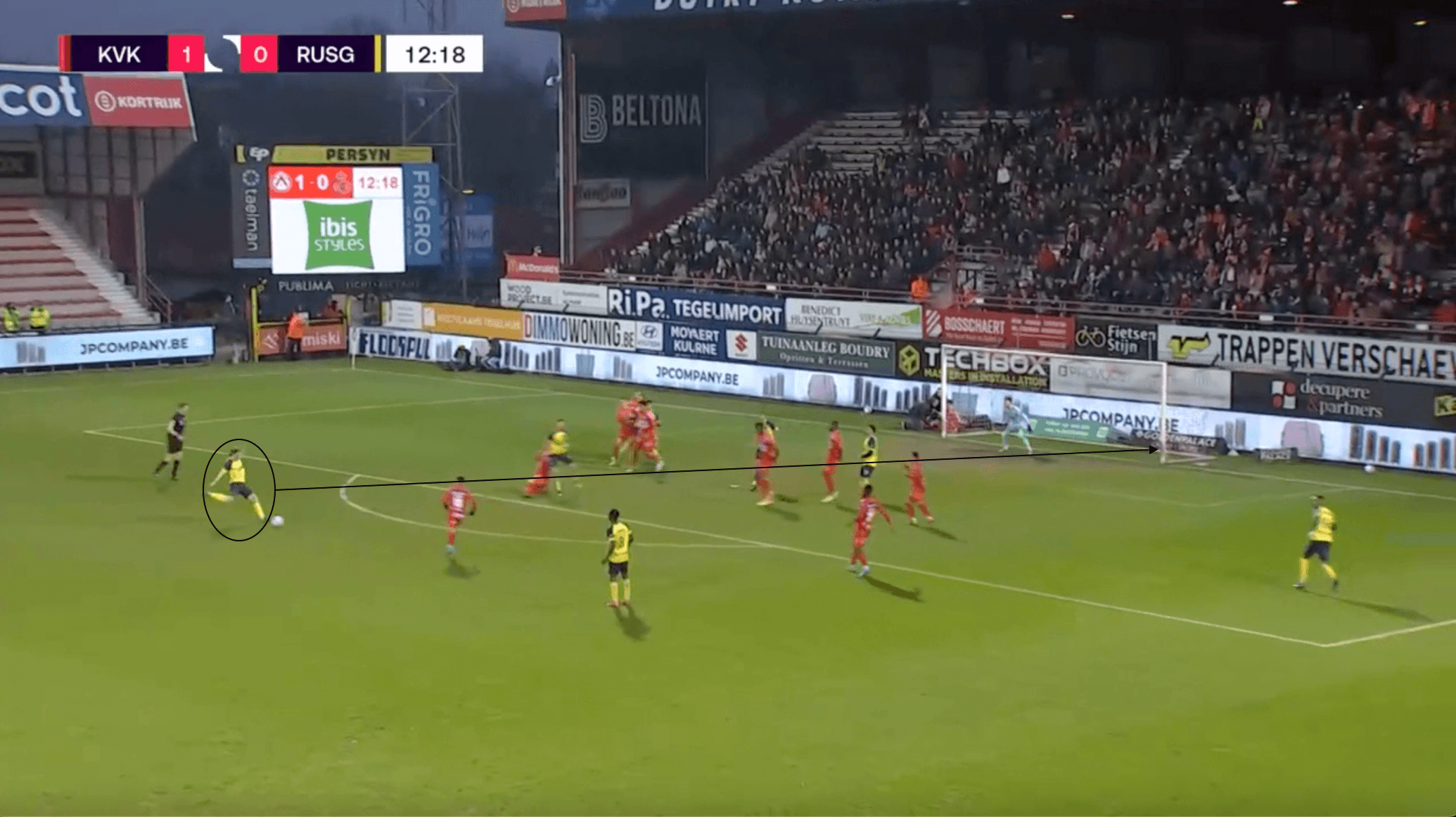 This final example is similar to the other two but still demonstrates what Nielsen is capable of when it comes to shooting from range. The ball is rolled across the box to Nielsen, who is running onto the ball from a deeper position. He once again is able to shoot first-time and has the pinpoint accuracy to pick out the far bottom corner.

Though Nielsen is not a midfielder that will consistently find himself inside the box trying to convert chances, he is a midfielder who is not afraid to shoot from distance. As this section of analysis has shown as well, he is very capable of shooting from distance as well, something that Club Brugge fans will surely see some of this season.

A final thing that we will look at in this scout report is Nielsen’s ability when it comes to quickly stopping opposition counterattacks after possession is turned over. The Dane has very good recovery speed, and his ability in defensive duels allows him to win back possession more often than not after his side turns possession over. This section will take a look at a few examples of this. 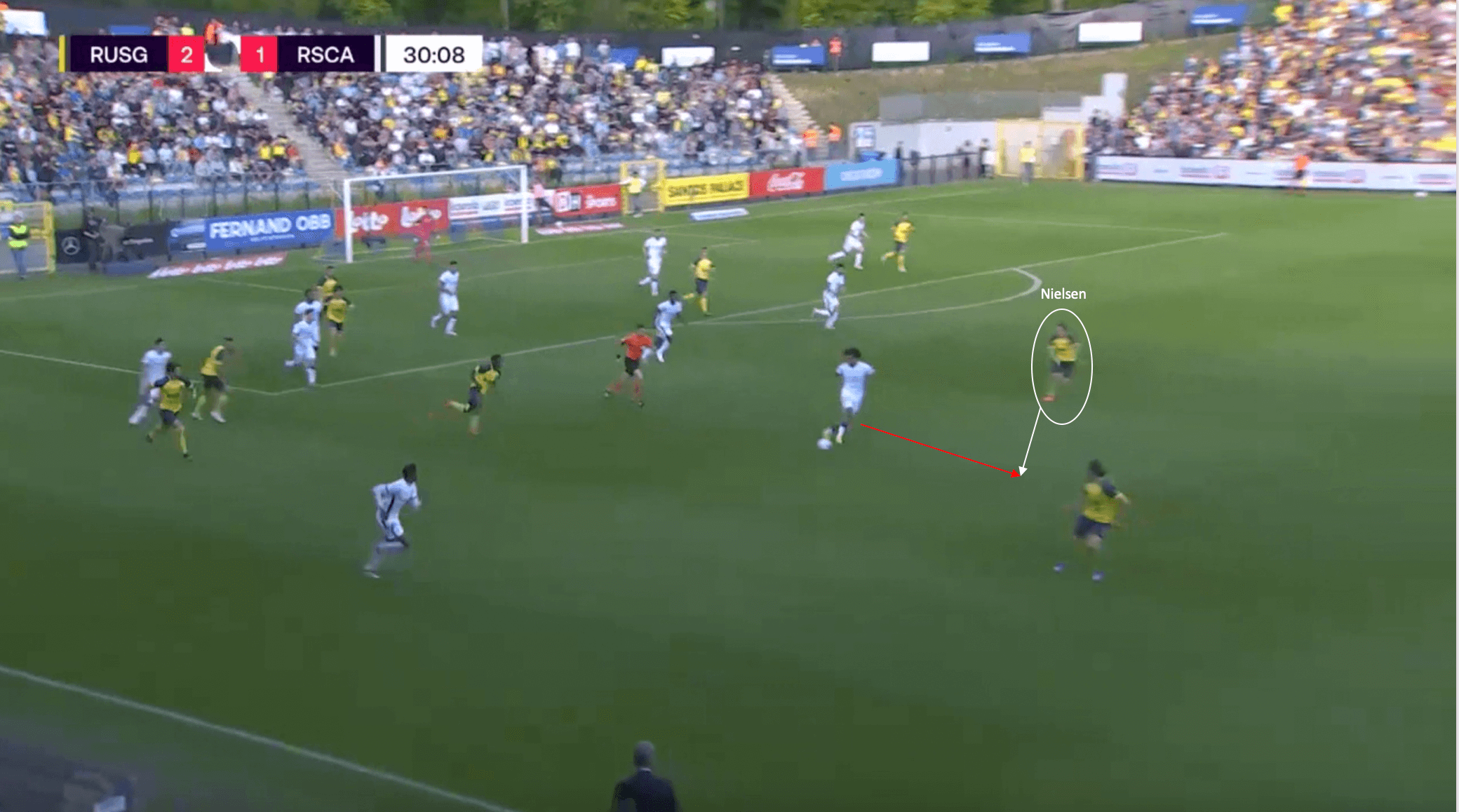 The image above shows an example of Nielsen’s recovery speed as well as ability to then win back possession. After USG turned possession over, Anderlecht looked to break on a quick counterattack. The ensuing pass was fed through to Bayern Munich striker Joshua Zirkzee, who looked to break away into space. However, Nielsen is able to quickly track back and put a tackle in on Zirkzee, regaining possession and allowing USG to continue their attacking phase, as well as prevent Anderlecht from starting a quick counterattacking sequence. 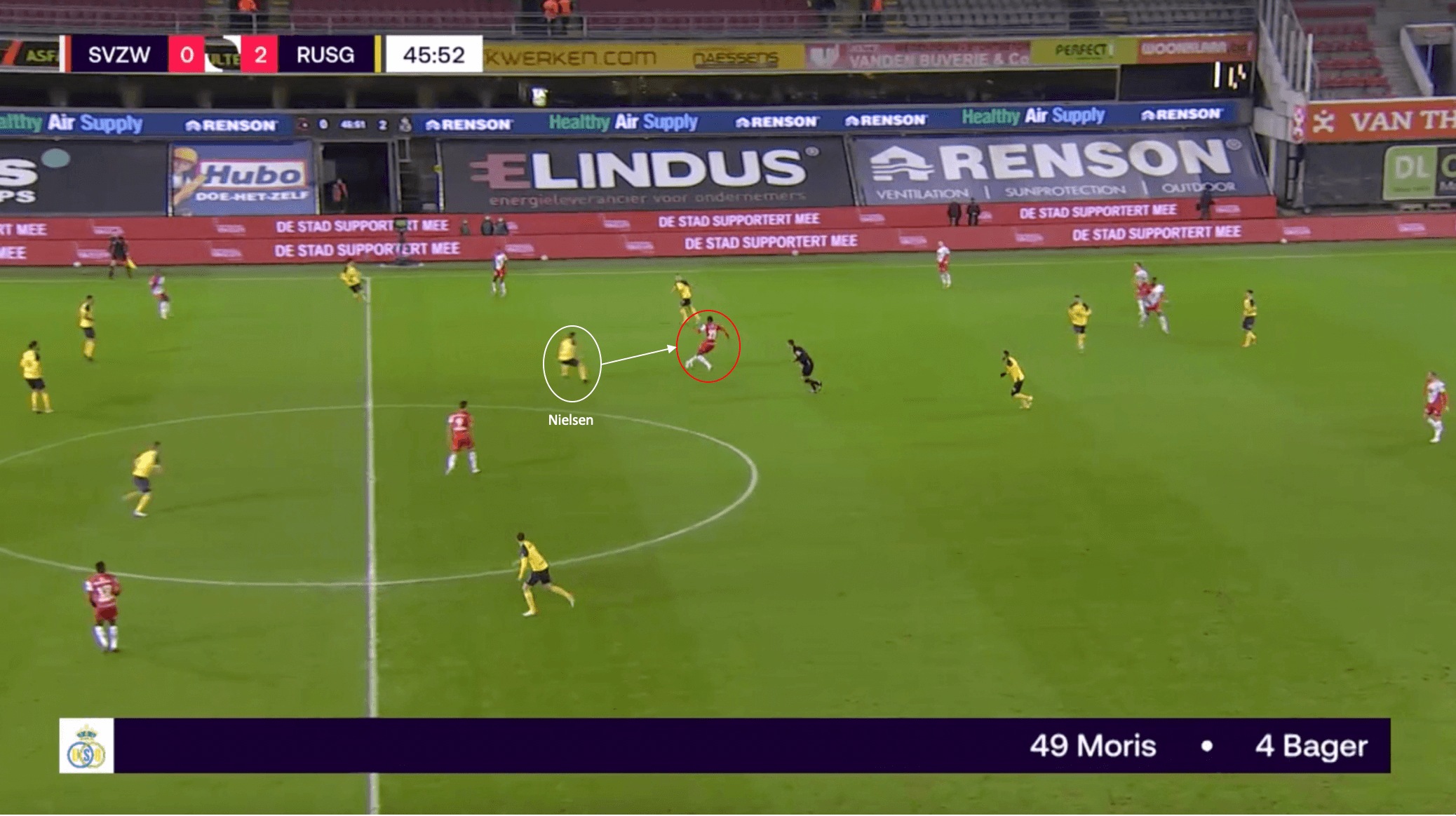 The phase of play above is not much of a recovery from Casper Nielsen, but it still shows his capability on stopping opposition counter-attacking sequences. After USG lose possession in the opponent’s attacking third, the opposition looks to break off on a counterattack. Nielsen is already positioned towards the middle third, but he is the only man between the player in possession and the defence of USG. Nielsen is able to smartly win possession back from the opposition ball carrier, tackling him successfully without committing a foul, and regaining possession for Union Saint-Gilloise. 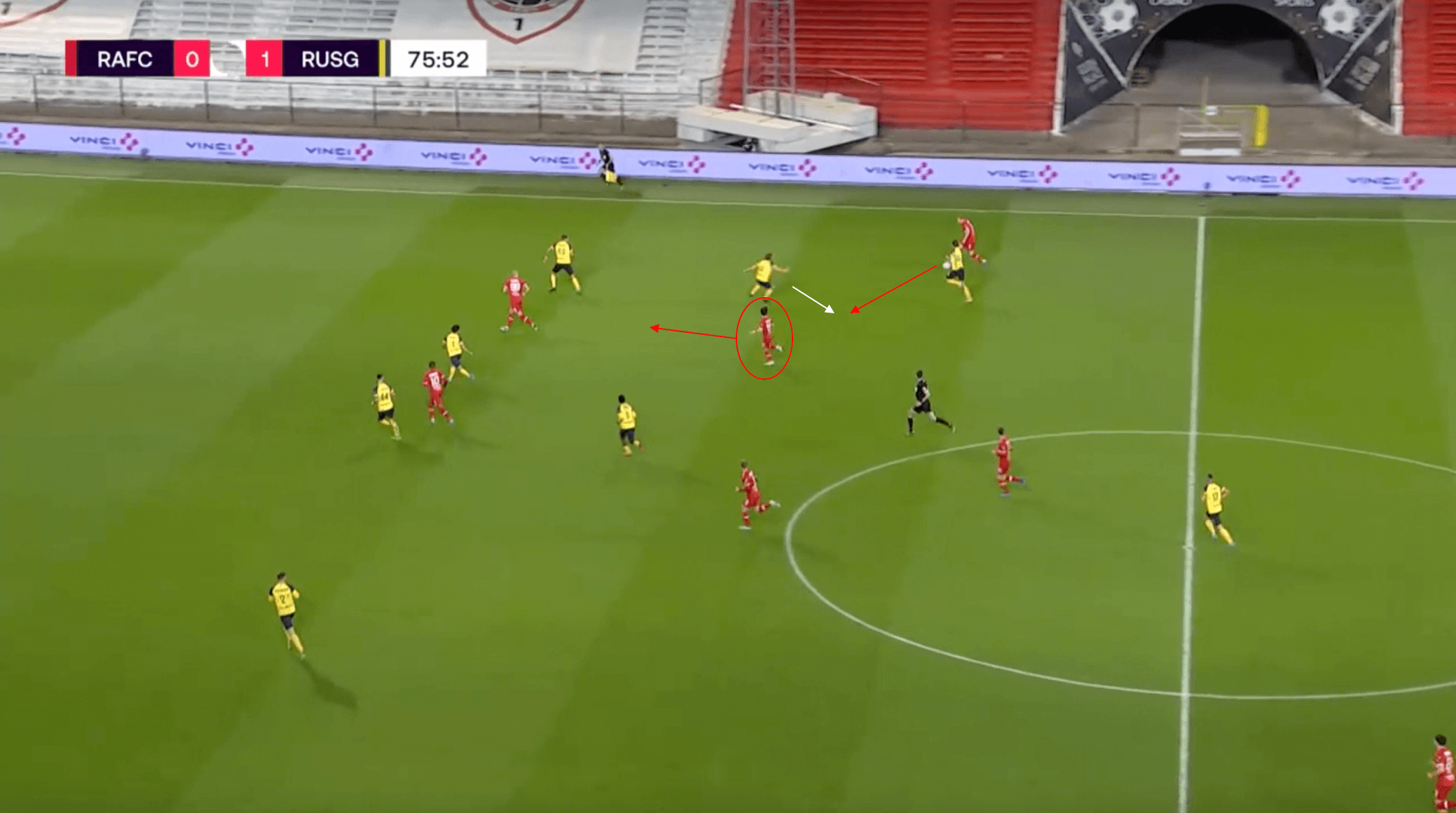 The final example for this section shows another instance of Casper Nielsen eliminating an opposition counterattack. Antwerp have won possession back and are sending men forward looking to try and catch USG exposed defensively. Nielsen is able to anticipate the pass that the wide player is looking to play to his teammate centrally, jumping in front of the pass and intercepting it. This eliminates the opposition counterattack and allows Nielsen to start USG on their own counterattacking phase of play.

Being the best side in Belgium, Club Brugge constantly dominate possession in their matches, with opposition sides looking to catch them out on the counterattack. Bringing a counterattack eliminator in Casper Nielsen into their midfield is quite a coup for Club Brugge, one that may have been worth waiting as long as they have to complete the transfer.

This tactics and analysis piece has been able to demonstrate the biggest strengths in Casper Nielsen’s game, as well as the type of fit that he is to Club Brugge’s style of play. The last year of Nielsen’s career has had something similar to a meteoric rise. From almost winning the Belgian Pro League with Union Saint-Gilloise, to getting his first cap for his country, and now moving to the Belgian champions where he may play sides like Liverpool in the Champions League, everyone should have their eye on Casper Nielsen next season.