Scottish Premiership clubs have been busy making additions to their squads ahead of the league season kicking off next weekend.

After a relatively tight race last season, Celtic and Rangers have been refreshing their squads as they prepare to go head-to-head for the title again.

Elsewhere, Aberdeen and Hibernian have been overhauling their squads after disappointing bottom-six finishes last season, while Hearts, Motherwell and Dundee United have also been active in the market as they prepare for European adventures in the coming weeks.

In this data analysis article, data for three of the biggest signings from the summer window so far will be analysed to assess what exactly they will bring to their new clubs and where they will fit in.

The data for each player’s chart is retrieved from Wyscout, and Python is used to convert the per 90-minute numbers from their previous clubs into percentile ranks against others in those leagues. The percentile ranks are then presented in a pizza chart to visualise their performance across several key metrics. 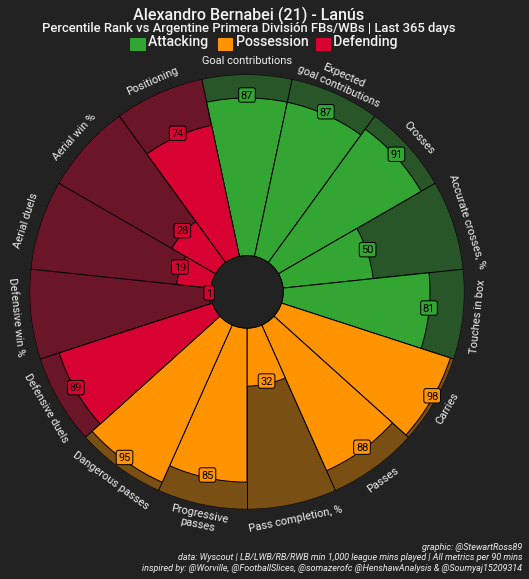 After last year’s huge squad overhaul following the arrival of new manager Ange Postecoglou, Celtic’s summer transfer window has been more about fine-tuning this time around.

They have still been active though with the permanent signings of Jota and Cameron Carter-Vickers who both played key roles while on loan last season as ‘The Hoops’ wrestled the title back from their city rivals. Former Dundee United goalkeeper Benjamin Siegrist, German defender Mortiz Jenz and former Huddersfield and Brighton midfielder Aaron Mooy have also been added to the squad ahead of the 22/23 season.

The one other area where Celtic have strengthened so far is at left-back. Scotland international Greg Taylor was the first choice left-back last season with right-back Josip Juranovic sometimes filling in. With back-up options Liam Scales and Adam Montgomery loaned out for more game time this summer too, Celtic signed their first ever Argentine in Alexandro Bernabei from Lanus in the Argentine Primera Division to add depth in that area of the pitch.

Looking at his chart for the last 365 days in Argentina’s topflight, Bernabei looks an exciting addition who is well suited to Postecoglou’s system. He ranks highly for his output, goals and assists, and is a high volume crosser, attempting 3.89 per 90 with an average rank for his accuracy (36.52%).

He also ranks very highly for carries, a combination of dribbles per 90 and progressive runs per 90. In the last year, no other full-back in the Argentine Primera Division produced more progressive runs (3.47 per 90). He also attempted the second most dribbles of all players included in the dataset, 6.24 per 90.

Importantly for a Celtic full-back, who is tasked with inverting to assist the build-up in central areas, Bernabei scores well in the possession section too. His rank for the number of general passes attempted is high but with quite a low rank for his completion rate.

That is likely down to him attempting more difficult passes as he ranks highly for progressive and dangerous passes, the latter of which is a combination of key passes per 90 and through passes per 90. In the last year, Bernabei attempted 0.45 key passes per 90, and 1.17 through passes per 90. It will be these progressive and dangerous passes that he will be tasked with producing in a Celtic team that tend to dominate the ball domestically week in and week out, last season they averaged 67.3% ball possession in the Scottish Premiership.

His numbers for positioning, a combination of possession adjusted (PAdj) interceptions, see Bernabei rank just under the 75th percentile.

A signing with a lot of upsides, it will be interesting to see how Bernabei settles in his first season in Scotland. 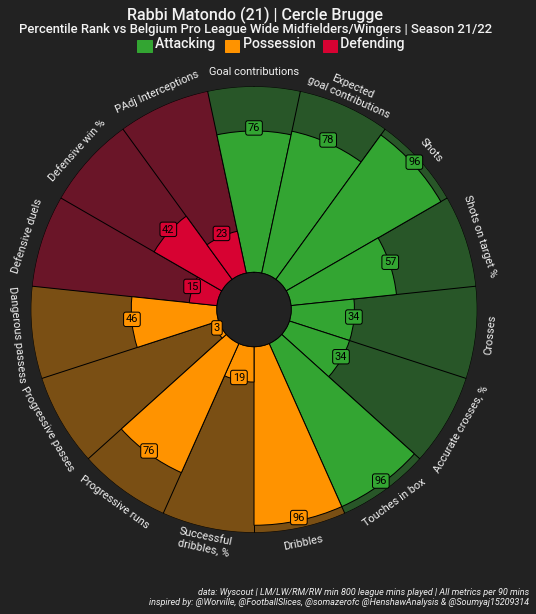 At Rangers, it has also been more evolution than a revolution in what is manager Giovanni van Bronkhorst’s first summer transfer window.

Van Bronkhorst, who replaced Stephen Gerrard last November, has brought in six new additions so far this summer. Croatian Centre-forward Antionio Colak has arrived from POAK in Greece, alongside midfielders Tom Laurence and Malik Tillman, the former from Derby County and the latter from Bayern Munich. Hearts’ John Souttar, who signed a pre-contract in January, and Ben Davies have also checked in at Ibrox to bolster their centre-back options.

Their other signing to date this summer has been Rabbi Matdondo from Schalke 04. The pacey Welsh international, who enjoyed a successful loan spell in Belgium with Cercle Brugge, has joined last season’s Europa League Finalists on a four-year-deal.

A dynamic wide player, who also had a loan spell with Stoke City from the German side, Matondo will add depth to van Bronkhorst’s front line.

Looking at his data from his loan spell in Belgium, Matondo has high ranks for his output – he was Cercle Brugge’s top scorer with 9 goals from an xG of 7.67 and provided 2 assists from an xA of 3.95.

A high-volume shooter, he averaged 2.95 per 90, and his shots on target % (41.89%) was just above average for a wide midfielder/winger in last season’s Pro League.

He wasn’t among the most productive wide midfielders/wingers in Belgium last season in terms of crossing (he produced an average of 2.11 per 90) with his accuracy rate (28.3%) also ranking quite low.

Looking at the possession section, Matondo appears to be a more effective carrier of the ball than a passer. He ranks highly for both dribbles (he averaged 8.57 per 90) and progressive runs (3.63) while he has low ranks for progressive passes and dangerous passes.

Off the ball, he doesn’t appear to offer too much with low ranks across all three defensive metrics.

Slotting into one of the two wide forward roles in Ranger’s 4-4-3 system though, Matondo’s pace and directness will add a different dimension to the Ibrox side’s attack this coming season. 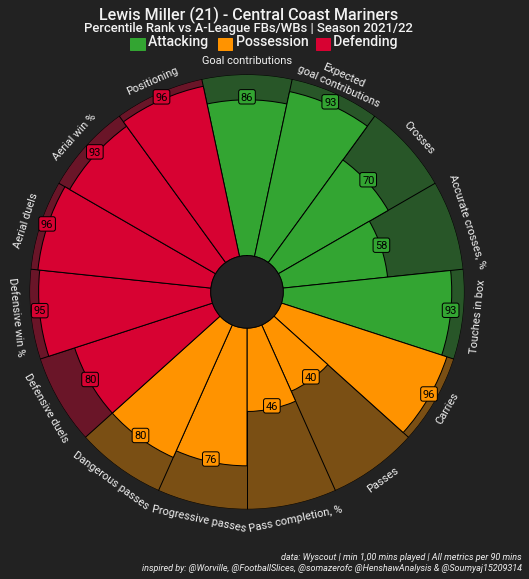 Hibernian have been the most active club in the summer transfer market in the Scottish Premiership with new manager Lee Johnson bringing in 11 new players at Easter Road.

One of those eleven is former Central Coast Mariners right-back Lewis Miller who has joined the growing contingent of former A-League stars in the Scottish Premiership.

At 187cm and 83kg, Miller is big for a fullback which makes him a solid defensive addition but he also has some good technical qualities too.

Miller is a progressive ball-carrier, with a top rank for carries. He attempted the second highest number of dribbles of full-backs/wing-backs last season in last season’s A-League, 5.57 per 90, while he also registered 2.56 progressive runs per 90.

In the other possession metrics, Miller was below average for the number of general passes attempted per 90 and his overall pass completion. However, he does rank highly for progressive passes and dangerous passes, indicating that when he is on the ball he makes passes that contribute to moving the ball through the pitch as well as providing teammates with goalscoring opportunities.

With Lee Johnson deploying his full-backs high up the park, Miller looks reasonably well suited from an attacking standpoint.

Defensively, Miller looks strong too, almost maxing out all the metrics covered in the chart. He is very active in duels and has high win rates in both defensive and aerial ones. His positioning rank, which covers PAdj interceptions per 90 and shots blocked per 90, is also high.

The question though will be how Miller’s numbers in the A-League transfer into Scotland. Wing-back Nathanial Atkinson, who Hearts signed from Melbourne City last summer, enjoyed a fine first campaign in Scotland but was not quite the standout he was in Australia.

In this analysis, which will be the first of two pieces, we have looked at three of the most interesting signings in the Scottish Premiership so far this summer.

It certainly looks like Scottish clubs are becoming smarter with their recruitment, and the role statistics can play in identifying the exact profile to fit their playing systems.

In the next piece, we will highlight another batch of Scottish Premiership signings which have caught the eye over the last few weeks.