We have already looked at how Barcelona can adapt without Andres Iniesta. We are now going to focus on how Vissel Kobe and Andres Iniesta are planning to take the J League by storm. Lukas Podolski is already there and their business manager (Masayuki Morii) is targeting the Japanese title in 2019. Masayuki Morii also has his sites set on the Asian Champions League a year later. For a team used to finishing mid-table, what has Andres Iniesta’s impact been?

Off the field impact

Masayuki Morii highlights that in a normal season Vissel Kobe sells 150,000 merchandise items but after Andres Iniesta arrived they sold 50,000 in two weeks. The merchandising department was unable to react to the demand but next year they will be ready as they attempt to become one of the Asian football superpowers.

Part of the reason for Andres Iniesta joining Vissel Kobe could be because of Barcelona’s shirt sponsor Rakuten. They have been sponsoring Vissel Kobe since 2014 and their founder (Hiroshi Mikitani) is a Kobe native. He is also a multibillionaire heavily involved with Japanese sport and looking to compete with the Chinese Super League.

On the field impact

With Andres Iniesta dropping into a deeper role in recent years many were not expecting him to set the J League a light. A more appropriate comparison would have been Andrea Pirlo in the MLS, playing as a quarterback orchestrating his team. In his seven appearances, Andres Iniesta has contributed two goals and overseen three wins and a draw.

Andres Iniesta has arrived at a team focused on a possession-based game. Vissel Kobe are currently sitting 8th with only mid table/ top half ambitions. They average 54% possession and look to control games through possession. This is where Andres Iniesta will be able to provide added value.

Throughout his 8 league games, Andres Iniesta possesses an 87% pass completion but what is significant is his key passes to set up attacking opportunities. 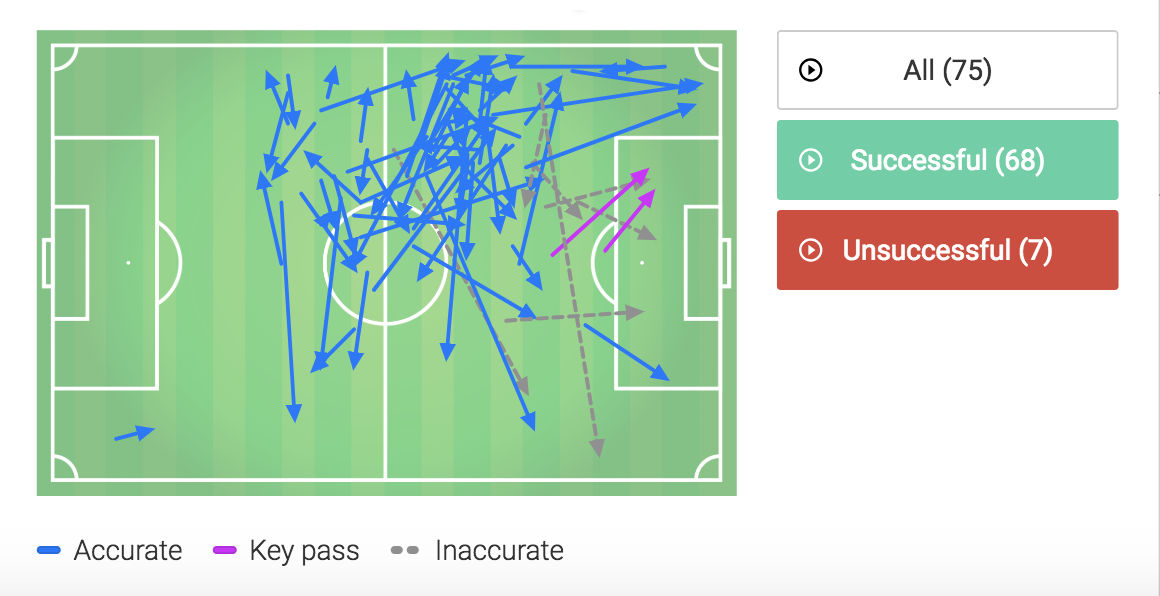 Above is Andres Iniesta’s pass map against Jubilo Iwata, in their 2-1 win. It is noticeable that he is looking to retain possession whilst also pushing his team forward. The majority of his passing focuses on retaining the ball but then looking to penetrate the defensive lines. He provided two key passes which helped to unlock the opposition’s defence. 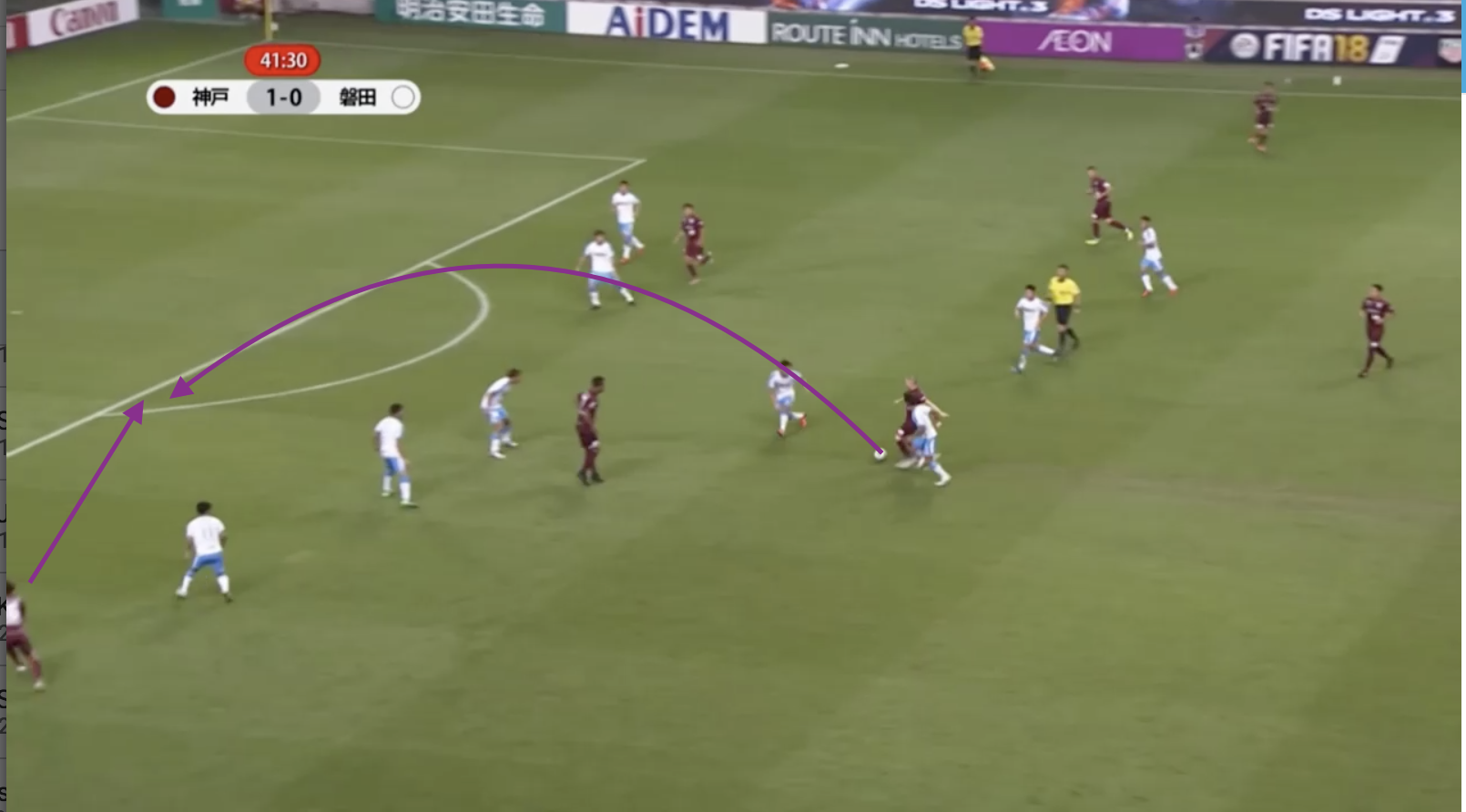 In this move, Andres Iniesta drives from deep to release his team-mate into a goal scoring opportunity. He now provides Vissel Kobe with an attacking threat from deep and can carve out opportunities. His creativity and flair are also important to highlight. With the defence pushing high he is able to scoop the ball over them onto the onrushing winger. This flair and creativity is a welcome addition to a Vissel Kobe team looking to push up the table. 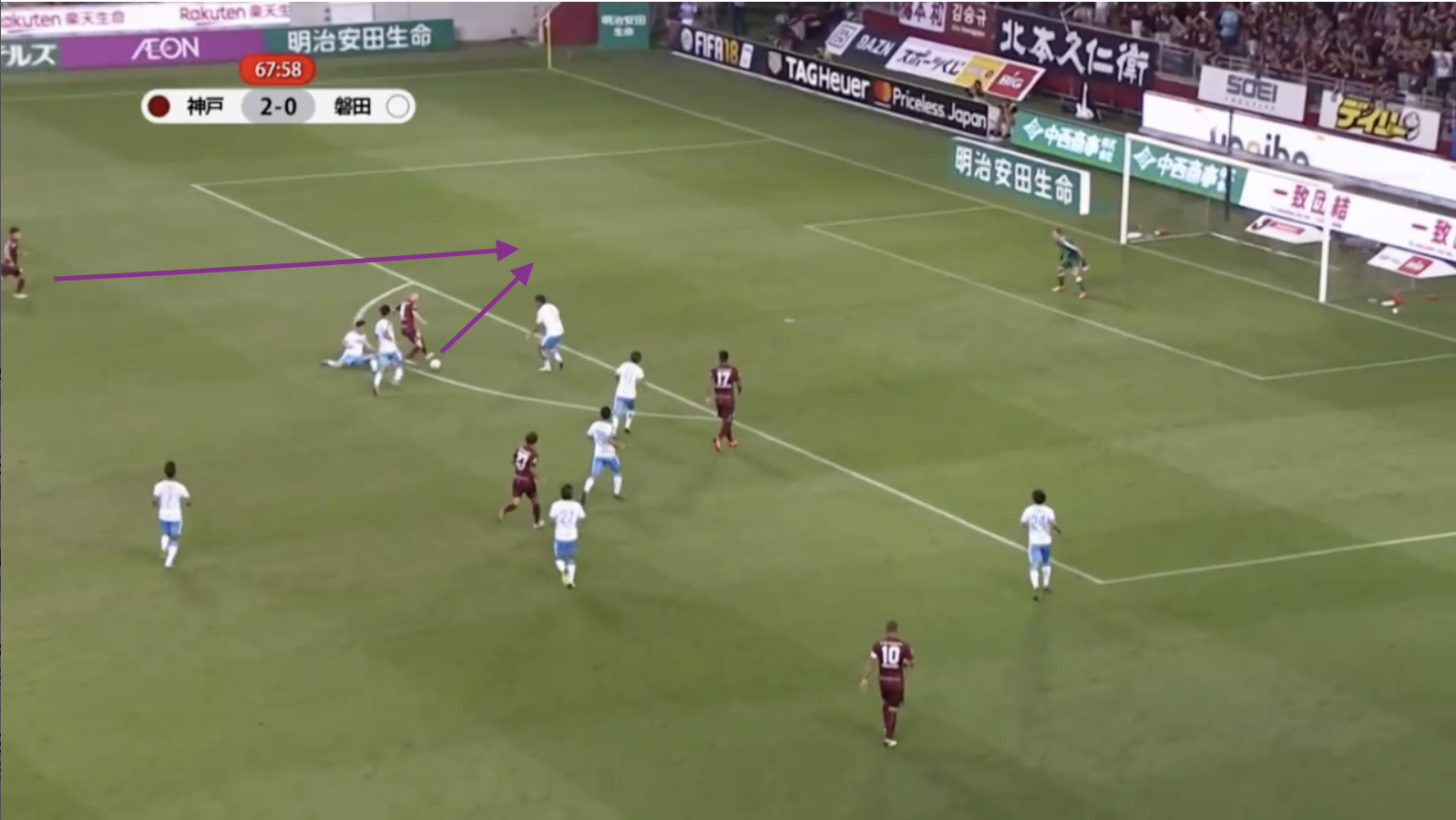 Andres Iniesta’s second key pass also highlights the creativity and technical ability he brings to Vissel Kobe. He manages to jinx past two opposition midfielders before laying the ball sideways for a goal scoring opportunity. Andres Iniesta technical ability is creating goal-scoring opportunities from a deeper position. Whilst he is playing in a central midfield role he is still able to influence the game in the attacking third.

Andres Iniesta has also added another goal-scoring dimension to Vissel Kobe. A player traditionally known for using his creativity to assist the likes of Lionel Messi, Thierry Henry, Neymar and Samuel Eto’o is now stepping up to the plate. He has scored 2 goals in 8 games which is not a bad return for a deep-lying playmaker. 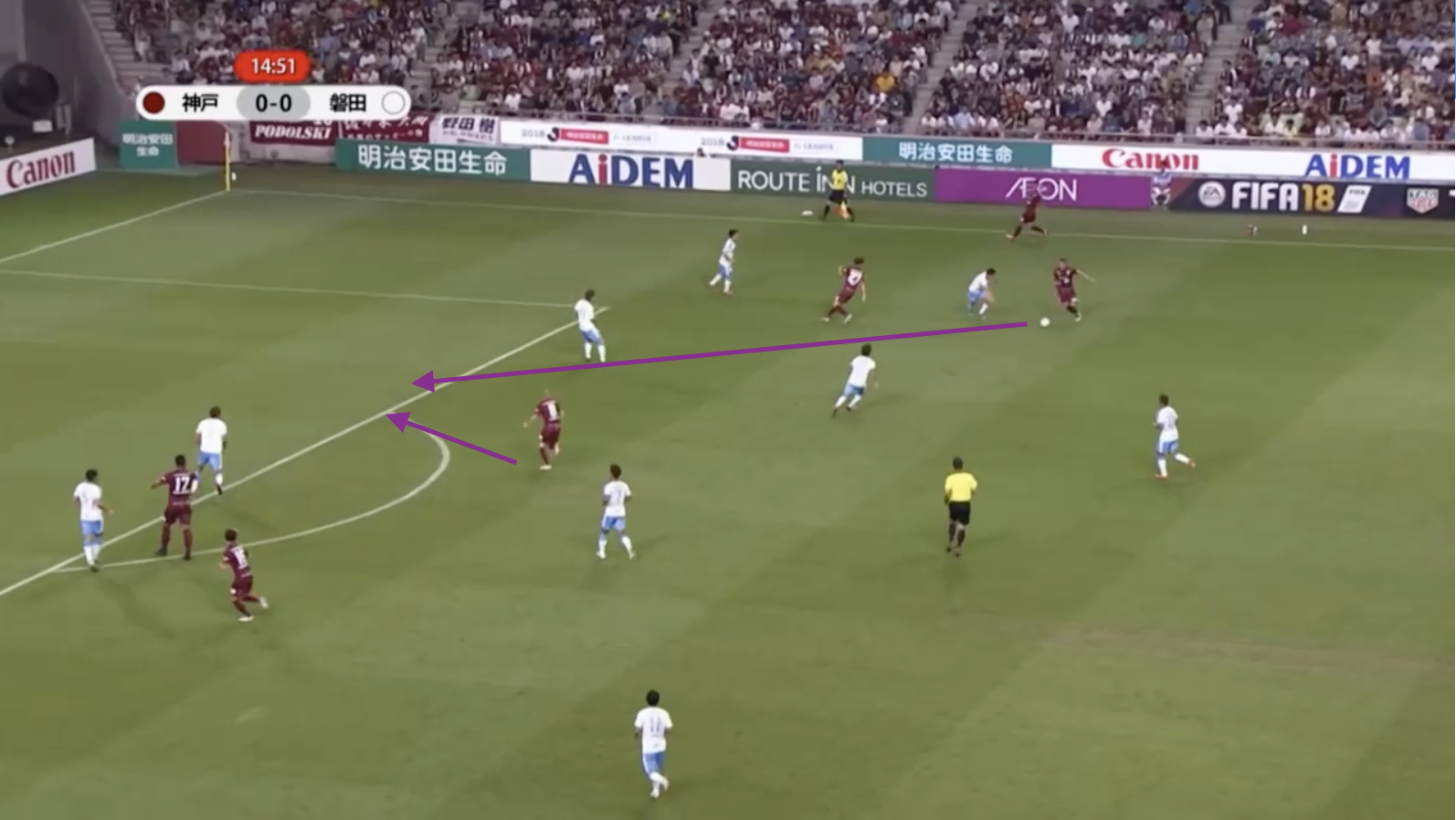 Andres Iniesta’s first goal for Vissel Kobe came from a run deep. He exploited space in behind the left centre back and his team found him in between the lines. Andres Iniesta then had the composure to beat the right centre back, round the keeper and then score. His in-game intelligence enables him to selectively break forward and exploit the weaknesses of the opposition. 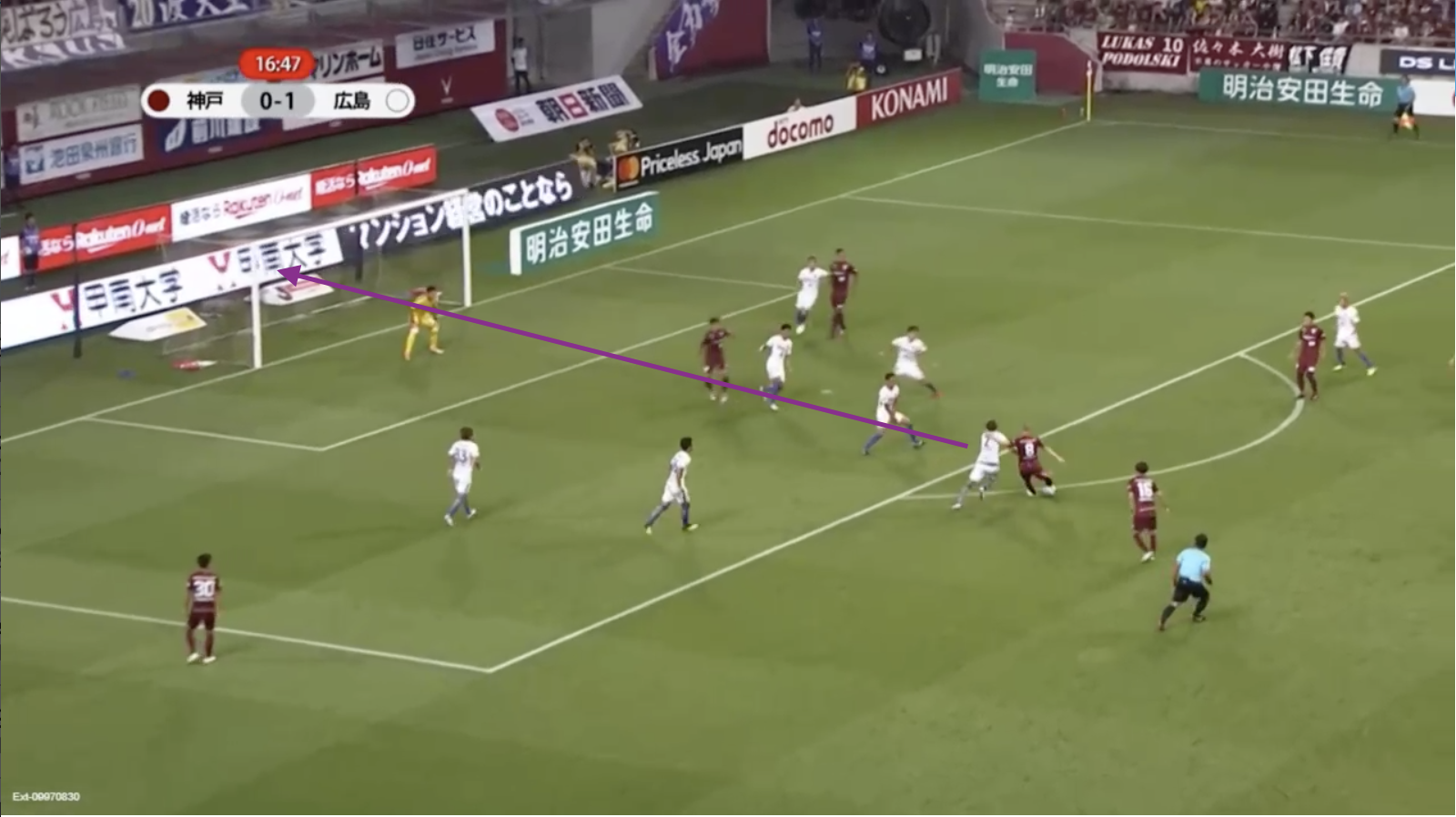 His second goal for Vissel Kobe showed another characteristic of his play. As before, he was able to beat a man on the edge of the box and then fire a shot into the top corner. Since Andres Iniesta’s arrival, he has provided them with a creative spark in the final third. Furthermore, now he is getting older he can pick and choose his times to push forward. His passing accuracy of 87% enables him to control the game from deep. He can then select the opportunities to push forward and influence the game. With these two goals, he has shown different types of scenarios where he can still be effective. Using his anticipation to break the lines between the defence. Then using his creativity to beat a man and score from outside the box.

Vissel Kobe were always looking for a big name signing. They are looking to compete with the Chinese Super League and recruiting a big name like Andres Iniesta will help them do that. However, Andres Iniesta is not just a commercial signing. He can still compete at the top level and really add value to Vissel Kobe’s team. His game has changed since his peak with Spain from 2008-12. He now selects his opportunities to push forward and dictates the tempo of the game from deep. Joining halfway through the season is always difficult but next year I would expect Vissel Kobe to be challenging for the title, lead by Andres Iniesta.