Evolutions and revolutions have occurred as football has passed, about tactics and management philosophy. A major impact on these changes within the game is positioning, and how coaches utilise players in certain roles. Over the last couple of years, we have seen a major shift in the number ten role, with the shift from 4-2-3-1 formations being utilities, and managers reverting to the 4-3-3. Players such as Mesut Özil at Arsenal and Juan Mata at Manchester Utd have been shown a cold shoulder at the elite level, because of their lack of intensity out of possession.

Creative players of this generation, such as Chelsea’s Mason Mount and Florian Wirtz, share a commonality with the likes of Özil and Mata, as they are both creative output for their respective teams while showcasing the required tenacity in the press. Within this modern-day mould, André Franco, a Sporting Lisbon academy graduate, currently plays for high-flying Estoril in Primeira Liga in Portugal. The young attacking midfielder is generating noise because of standout performances against Portuguese heavyweights Benfica and FC Porto. Franco has flair and will run the hard yards, but most of all, he is an out-and-out creator in and around the penalty area, looking to put the ball on a plate for others.

This tactical analysis and scout report will look into what makes André Franco so interesting, regarding his creation of attack, as well as his set-piece prowess. Last, I will cover some weaknesses André Franco possesses that, if ironed out, can bring him to the next level.

For Estoril, André Franco plays on the right side of a midfield three in a 4-3-3 formation. Because he is left-footed, when occupying this position, Franco can open his body and try to control and create chances with in-swinging balls. Also, as a number eight within Estoril manager Bruno Pinheiro’s system, he can interchange with the near side winger and rotate positions.

When observing André Franco’s heat-map, we can see this season he has been positioned solely on the right-hand side this season, occupying the wide areas and the right half-spaces. From these areas, Franco can do his best work. The heat-map also shows André Franco operating slightly deeper; the Portuguese midfielder mostly plays within the middle and final third but does like to drop deeper from time to time to facilitate build-up play and add a bit of urgency to his team’s play. 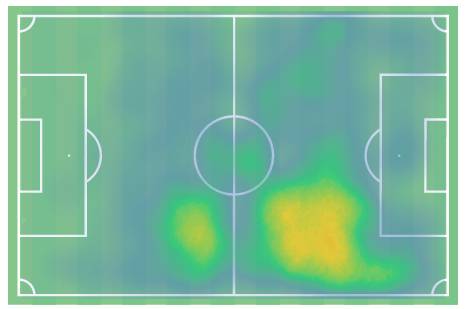 Before playing a creative pass into a teammate and showing his range of passing, an attacking player must be able to utilise space effectively and place himself correctly to receive the ball. André Franco’s primary goal and role within the team is to speed up attacks and play the killer pass through when on the attack, but during the first phase of play, Franco excels when positioning himself in between the lines to receive. To position himself well, Franco well uses scanning over both shoulders.

Here we can see Patrick in possession during the first phase of play. André Franco, in the right half-space, is perfectly positioned to receive, turn, and progress the play forward. 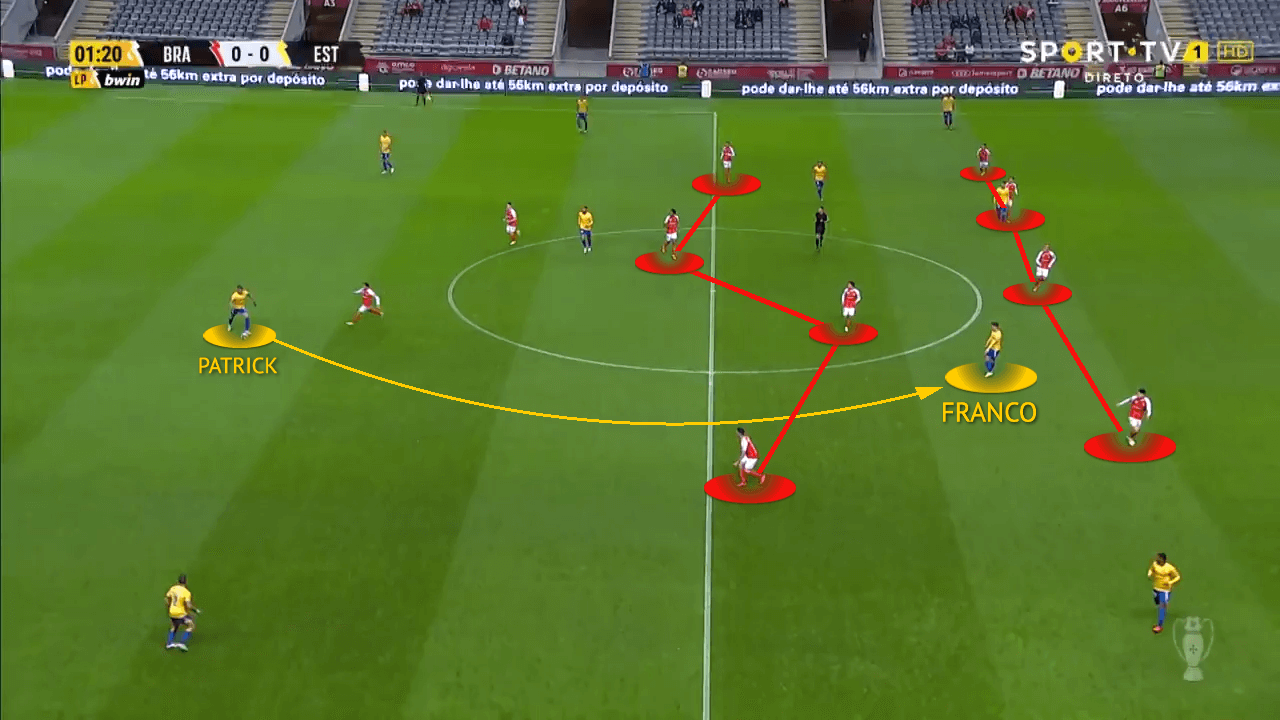 When in these pockets of space, Franco likes to play with his back to goal — he could position his body and be on the half-turn during certain situations. Upon receiving, Franco does well to shield the ball with his body, showing very good ball retention skills, along with his ability to play quick bounce, passing to teammates when under pressure.

When in possession, Franco is quite positive in his movements and actions, as he likes to combine and exchange short and quick passes with teammates around. His interplay and link-play are also what makes Franco such a live wire in attack; his rotating with others besides his variation of passing. André Franco gets a wonderful reverse pass, finding the attacking player making runs within wide areas.

André Franco is a creative threat, regardless of the distance he is from the opposition goal, the Estoril midfielder can hurt teams in a multitude of ways, within the box, within zone 14 and from moderately deeper domains. André Franco playing on the right-hand side does him a lot of good. As mentioned prior, he can open his body and survey the pitch and spot openings.

Here, André Franco has done exactly that within this example. On the right-hand side, Franco shifts the ball to his strong side and spots a teammate making a late run on the far side. Franco perfectly plays the ball into the path of his teammate, playing him through on goal. 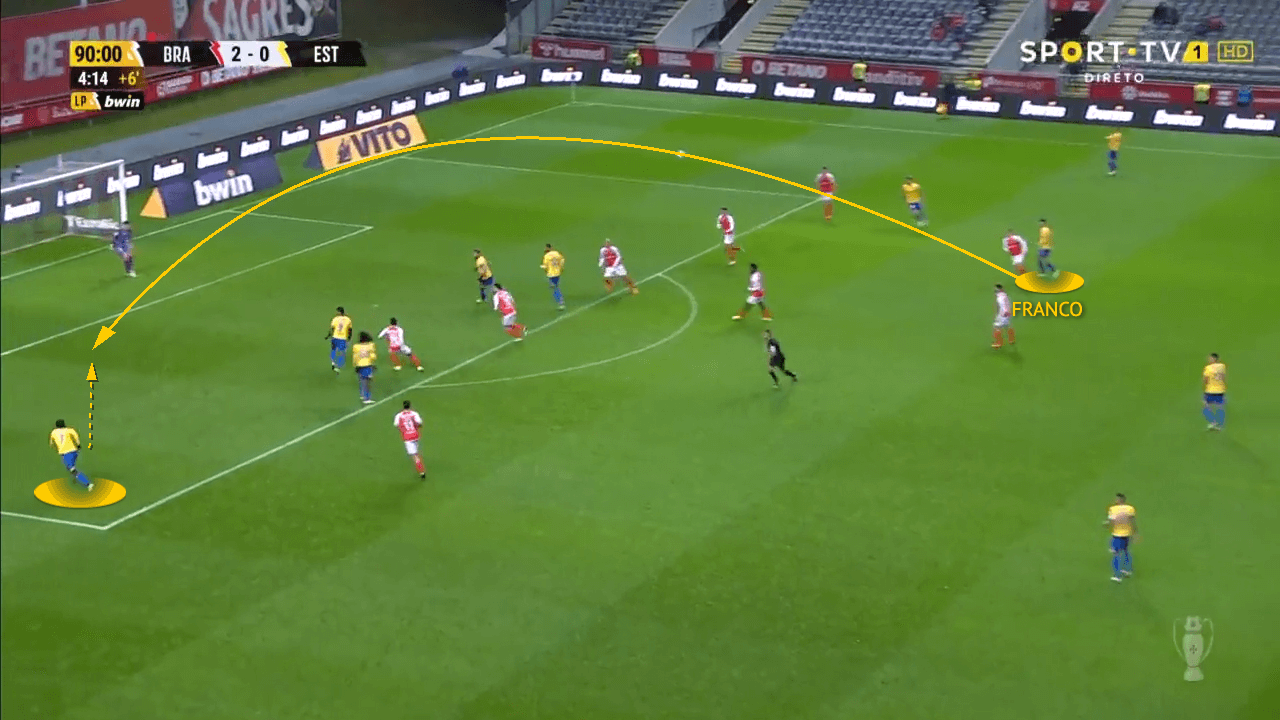 Just like his longer-range chance creation, André Franco is also incisive when in and around the opposition goal. In addition, the 23-year-old does well to combine his skills with quick actions, which makes it difficult for opponents to nullify. With Franco tight dribbling and a good eye for a pass, the young playmaker presents unpredictability and creative variety.

Here, André Franco is on the ball and uses his tight dribbling ability to burst into the space just in front of him. 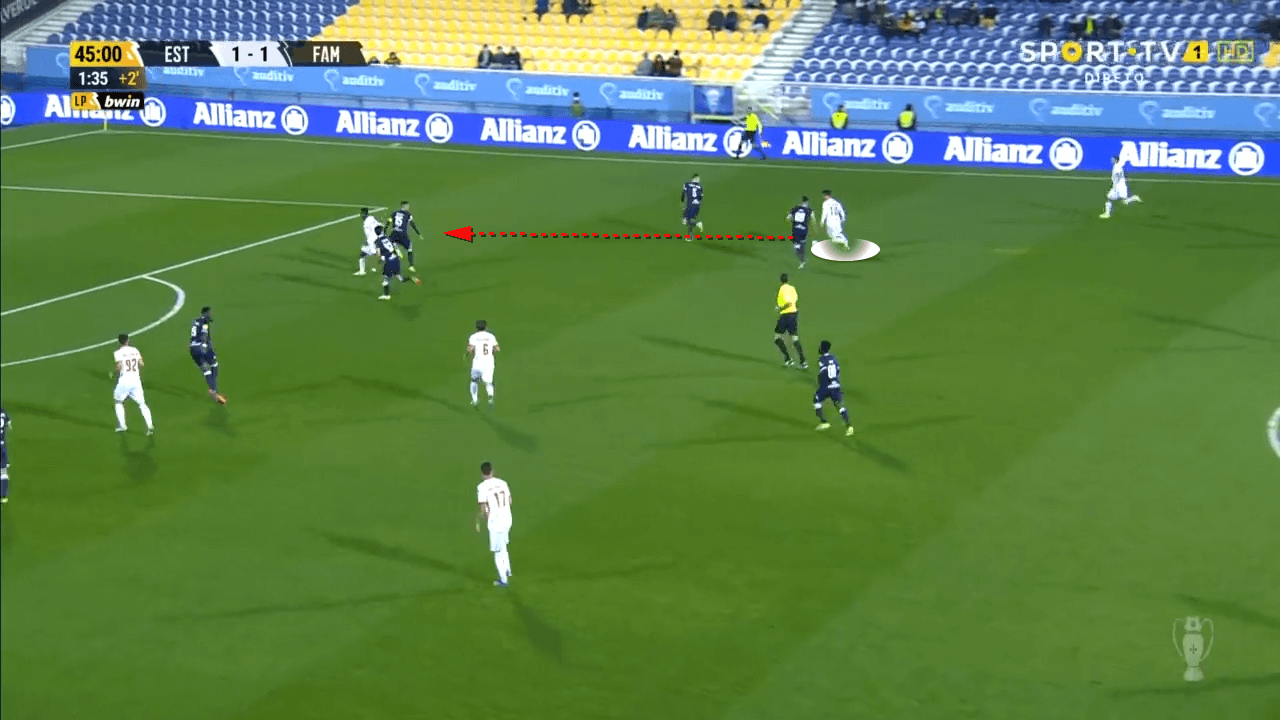 Franco makes his way into the box and stops to face the goal. As he does this, he notices a teammate within proximity making a blindsided run. Franco can delicately chip the ball over two defenders and set up his teammate with a clear chance, a chance he takes. 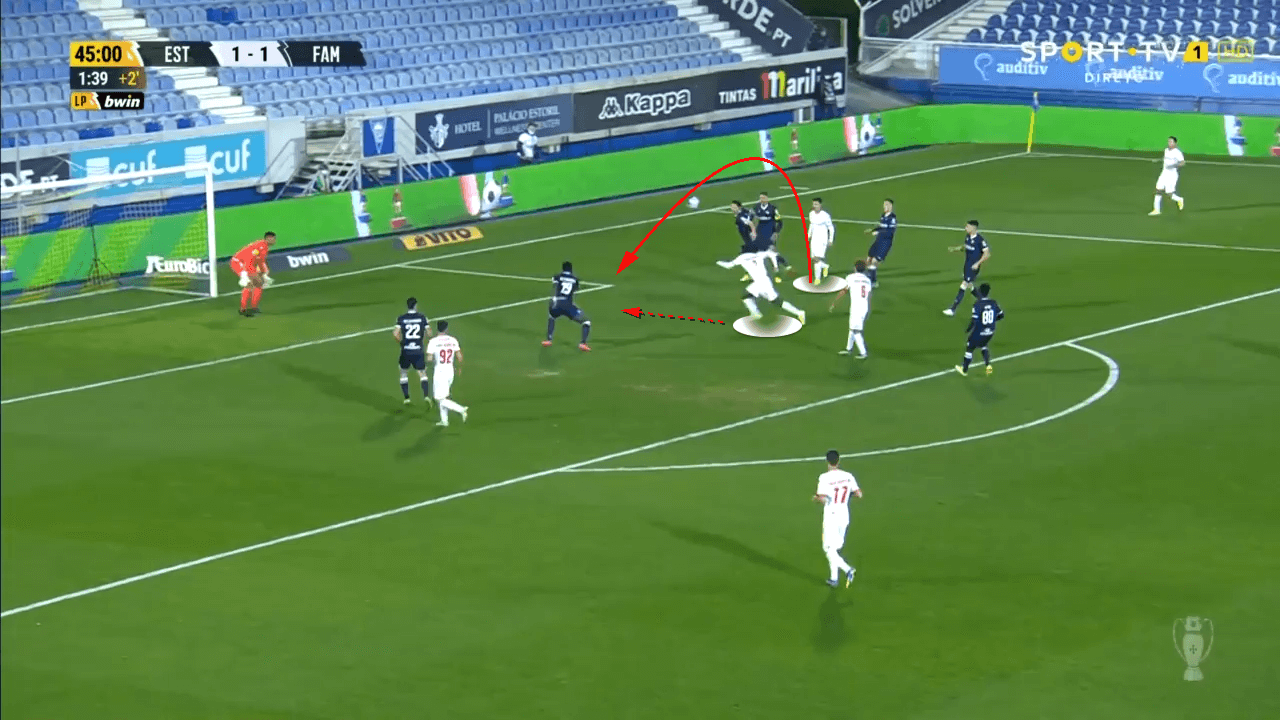 When the ball is live, André Franco is his team’s creative hub and spark in attack, and this notion does not change during dead ball situations. Whether the ball is in-play or during set-piece opportunities, Franco gets quality within his crossing, which adds value to his creative work. Regarding his set-piece taking, he can produce such good delivery so often, because of his ability to get good contact with the ball; with his good ball-striking, Franco can hit a ball at speed, allowing players in the box just to simply guide and direct the ball. Even with all his power, André Franco also has grace, as he can deliver a sweet and delicate ball, front and back post.

From this wide position, Franco can pick out a teammate that begins his run in the middle of the pack, but then diverts his run to the front post. Franco gets the required pace and height on the ball, to bypass initial players at the front post. 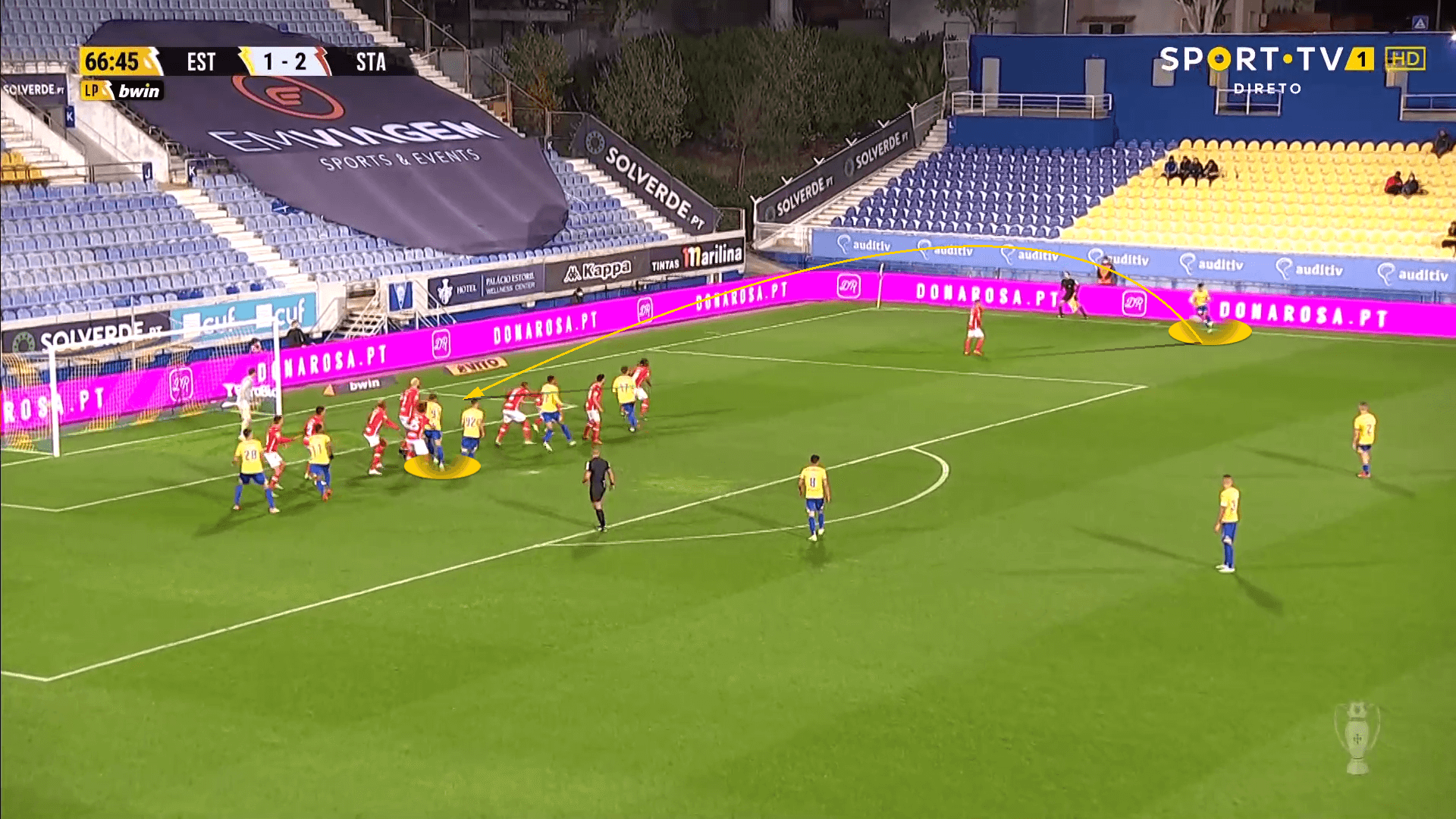 André Franco’s vision and execution comes through when crossing; the young midfielder’s capacity to pick out players within very little space is beyond his years. Here, we can see Franco on the edge of the box on the right-hand side. From this position, he sports a teammate in the box, in-between two opposing centre-backs. With the quality André Franco possesses, he can deliver an inch-perfect ball into the box, onto the head of his attacking teammate. 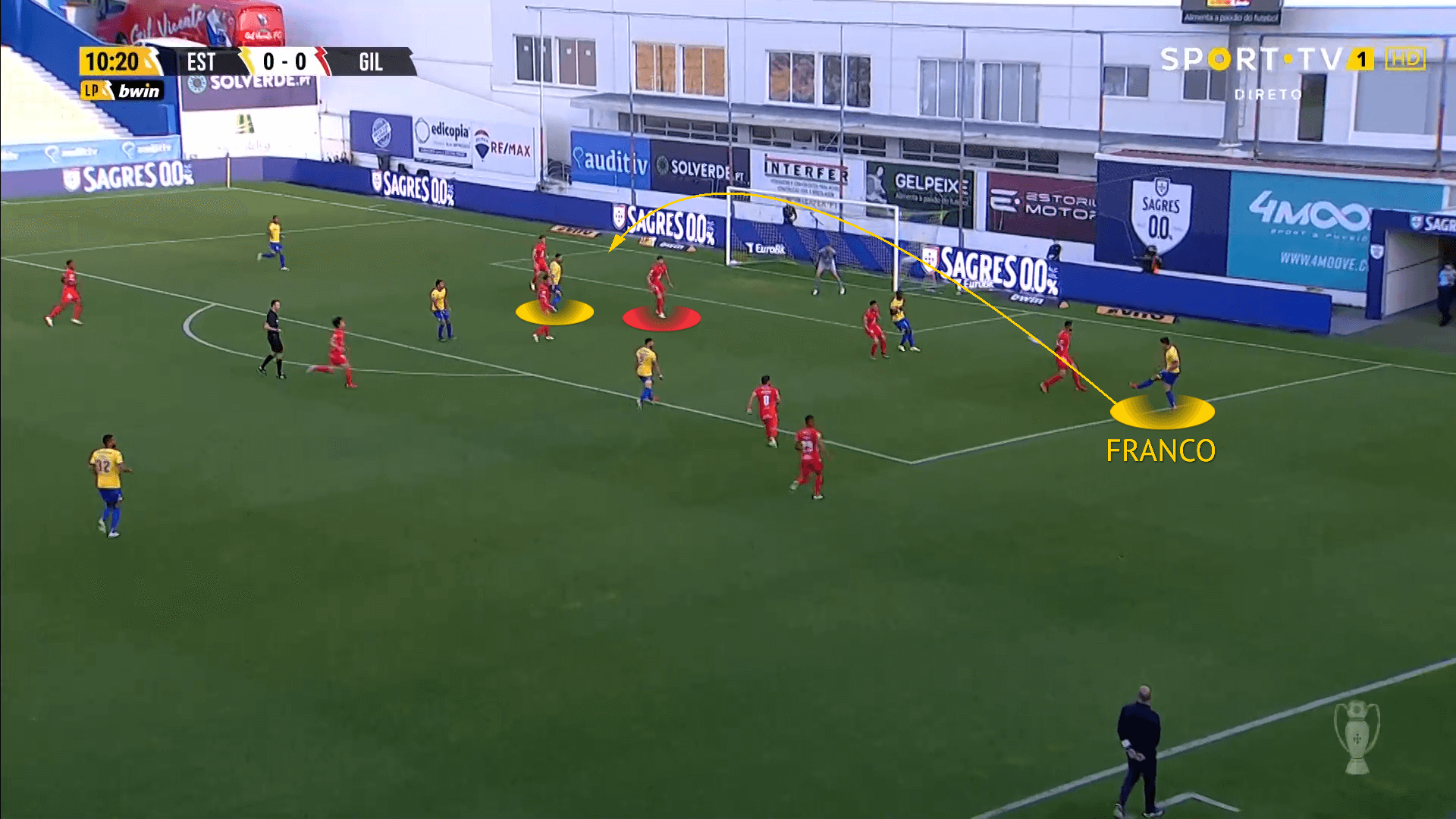 When discussing the brilliance of young players, we must all remember, these players are still developing their game, and because of this, they are imperfect. For all of André Franco’s qualities, he still has some aspects of his games that need redefining, the biggest being his understanding of tempo. As mentioned previously, one of Franco’s greatest assets is his adding urgency to attacks, and forward-thinking nature, but this can lead to his downfall.

Because he wishes to progress the ball forward at any opportunity he gets, some actions can be rushed. Franco enjoys exchanging passes at short distances, but during these situations can make better decisions.

Estoril wins the ball back in their defensive third, and Franco is now in possession. He decides to give-and-go with his teammate nearby in a relatively congested area, which is not a terrible decision, but on the far-side, Arthur is in empty space, which would have been a better choice, about the pass. With this in mind, Franco, at times, sees one play and goes for it, instead of looking at all distinct possibilities.

Overall, some actions can be frantic, and for Franco to continue his development and possibly move on to a top-five league in Europe, Franco needs to understand when and where to switch the tempo of play; to know when to slow down and be passive and just keep, and when to speed up. 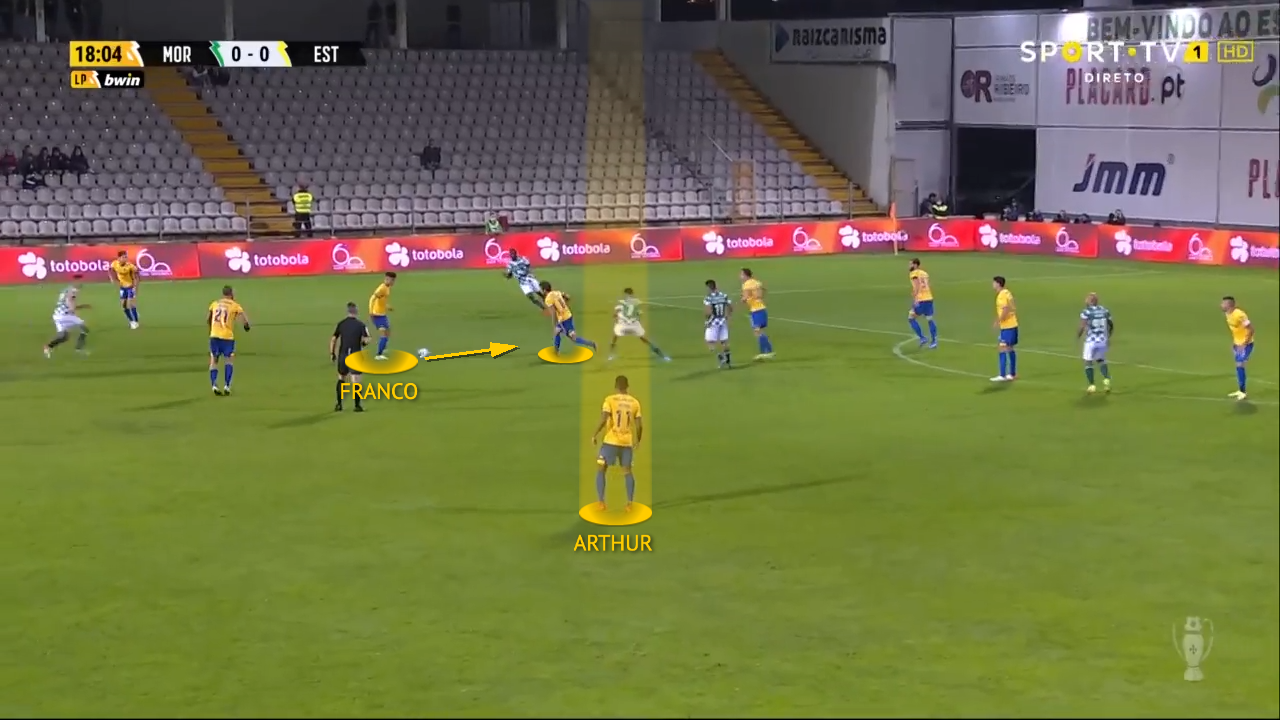 With the requirements of positions changing and football continuing to grow, certain players have been chopped and changed to integrate players that can fulfil the modern way of playing. Andre Franco is a perfect example of a player that combines modern-day and yesteryear, a pressing play, but more noticeably an old-school creator. André Franco has variation in his game, and through his crossing mastery, dead-ball ability and imagination, the Estoril midfielder adds a lot to his team. Franco does well to combine his skills, as well as contribute to hurt teams from long and short distances, but the youngster must slow down and make the best decisions that optimise his team’s success. André Franco is on a good path, and it will surely progress to the heights of the Premier League or UEFA Champions League in years to come.