Even though the hype around Real Sociedad has perhaps died down a bit over in La Liga, they are still a force to be reckoned with. A lot of that is due to the tactics of Imanol Alguacil but also because of the incredible talents currently playing for the team. And Ander Barrenetxea surely has to be named as one of the best of them.

The 19-year-old is still developing but at the same time, is showing unreal potential to become one of the world’s best in the not-so-distant future. For that reason, this tactical analysis will be a scout report on Barrenetxea, unearthing his main traits as well as using analysis to pinpoint some weaknesses in his player profile.

As ever, we’ll start this tactical analysis with a short player overview. Ander Barrenetxea is a very young winger who can also be deployed in deeper areas, playing the role of both a wingback and an attacking full-back should the team need him to. This, combined with his ability to play on both sides despite heavily favouring his right foot, is a sign of versatility not many young talents possess.

This can also be seen in his heatmap and the graph depicting his favourite positions down below. Even though he prefers being higher up the pitch, it does seem like Real Sociedad see him as a good option in the wingback role.

More often than not, we’ll see him on the left side as that gives him the option to cut in and position himself on his right foot. However, when deployed on the right, the 19-year-old is still a good overlap option to put in crosses into the penalty area.

Below is a dashboard comparing Barrenetxea to the rest of La Liga’s forwards and the data can tell us something more about his tendencies. It has to be noted, however, that despite being an enormous talent, the 19-year-old is still very much an impact sub for Alguacil. 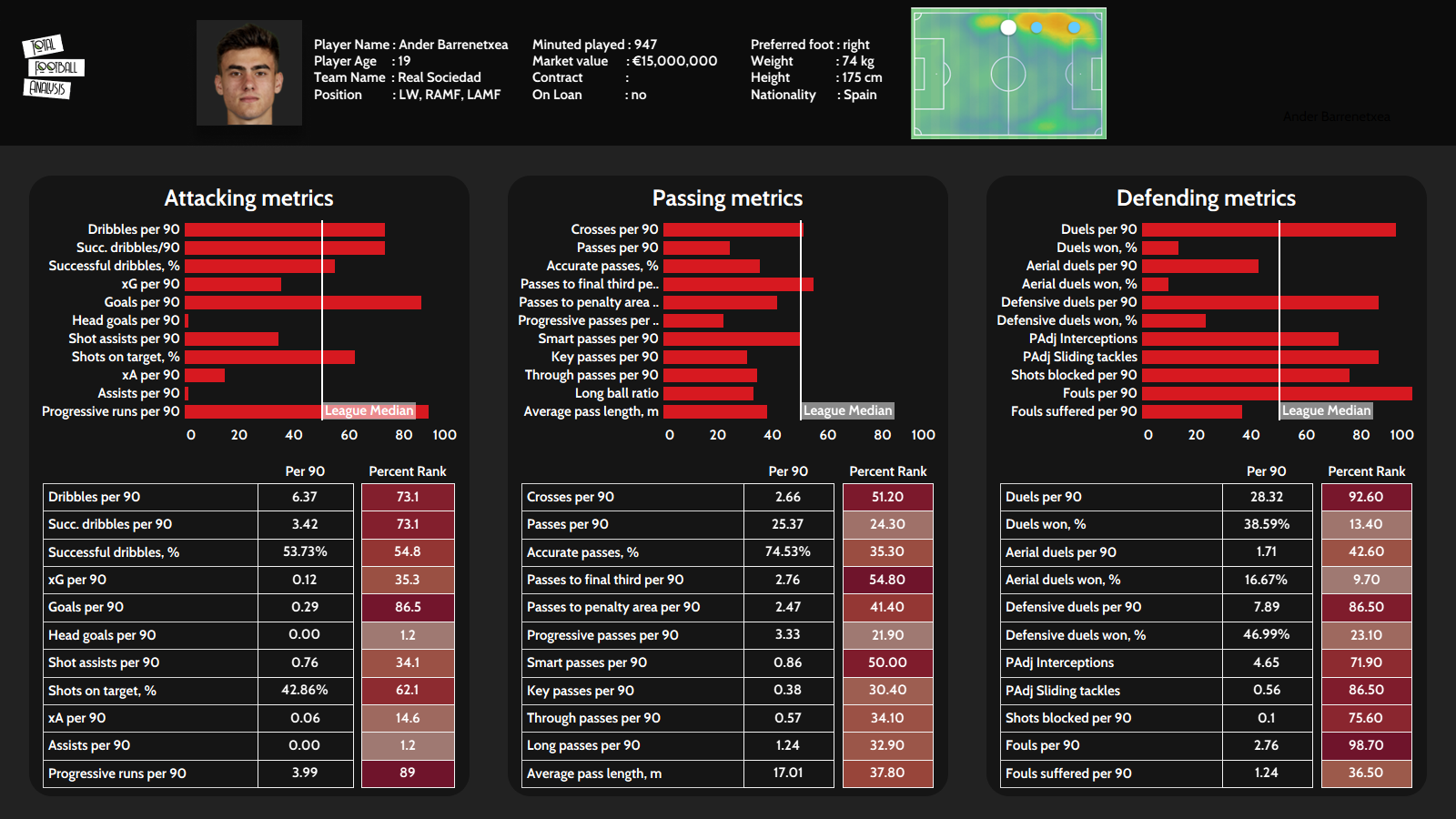 Some of his main strengths are creativity through dribbles and progressive carries of the ball. Barrenetxea’s total figures can hardly compare to the rest of the league simply due to low game time but despite all of that, he still contributes to the team. We can also see his tendencies on the ball, with limited build-up contributions but with effective crosses, which are a big part of his arsenal.

Interestingly, due to La Real’s highly aggressive defensive tactics, Barrenetxea is used to putting in the work out of possession as well, pressing high and aiming to recover possession in the opposition’s area. It isn’t a surprise to see his numbers very high in those categories.

One thing he should definitely improve on, however, is his final product and that’s despite such high goals per90 values. But we’ll discuss that in more detail further down the line of this scout report.

One of Barrenetxea’s most powerful weapons is his ability to carry the ball through his runs. Despite being so young, the winger can recognise the space that can be exploited and then use it to his team’s advantage. However, as was already mentioned earlier in the analysis, he is often swapped across multiple positions, altering his role in the process.

Below is a graph depicting Barrenetxea in a more advanced role and a deeper role. Some differences need to be pointed out here. 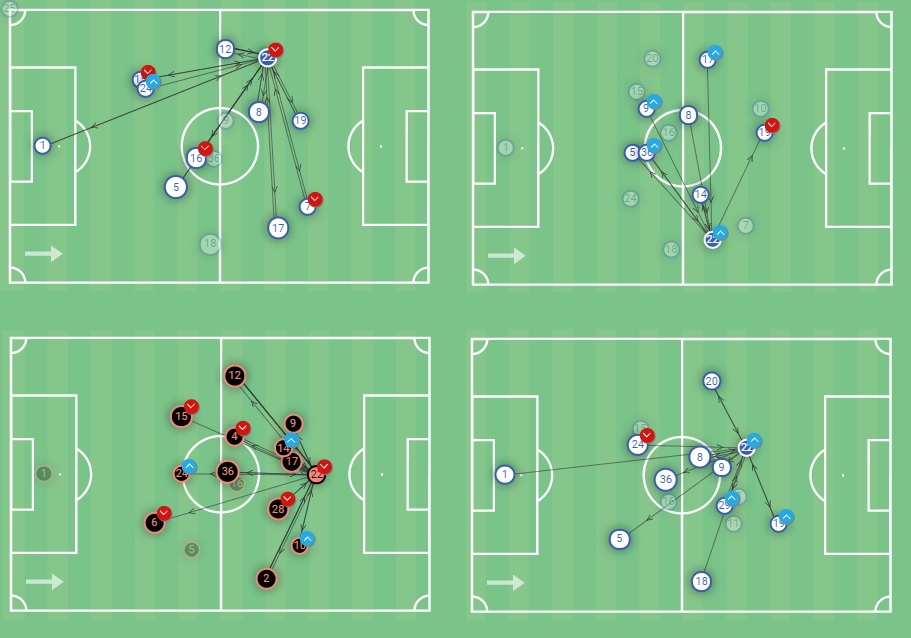 Firstly, it’s his involvement in the general attacking setup and tactics. Even though Real Sociedad are a positional team that wants to have the ball, it does seem like Barrenetxea is mostly utilised either as a valve for side switches or is deploying those passes himself when used in that wingback/full-back role.

The situation is slightly different when we see him in a more advanced role, acting either as a winger or even an inside forward. In those scenarios, it does seem like he’s far more involved and is fed more passes instead. This also leads us to the second difference which is generally the types of passes we see him deploy.

In a deeper role, he tends to go long to either switch sides or send one of his teammates into space. But when he’s the one upfront, we’ll see his link-up side far more often, which is crucial in a system that is generally based on such tactics. But there is a clear advantage of having him deeper and is probably the reason why Alguacil still deploys him there.

Barrenetxea loves to drive with the ball and is excellent at recognising the space that can be exploited. Alongside his dribbing, that is surely among his best traits. 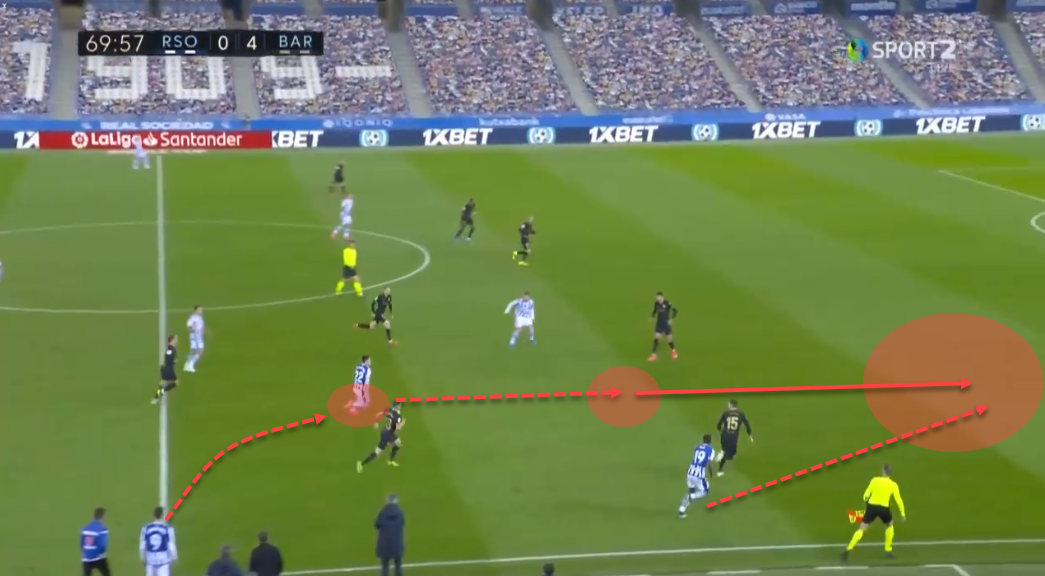 In the example above, we can see him starting from a deeper position against Barcelona and immediately recognising the space he can burst through. But it’s not only his running with the ball but also having the vision to then deploy passes to his teammates. This is a pattern in his overall gameplan.

Receive deeper and preferably with space to run into, identify the space, burst through it and then look to combine higher up the pitch. Barrenetxea is not a build-up machine but his passes into the final third and carries into the box are on an above-average to an excellent level.

Here’s another example where a great run and link-up with his teammate is then followed up with a key pass that sets up a great goal-scoring opportunity for Real Sociedad against Levante. 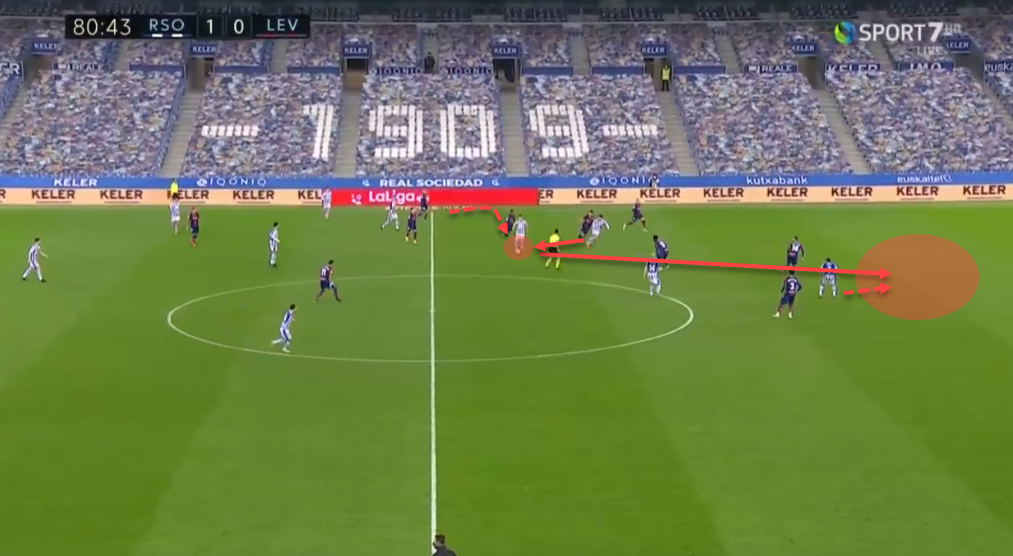 But interestingly, despite having the vision to deploy those passes, it still feels he’s not attempting them often enough. We’ve seen from the initial graph in this scout report that he likes smart passes but due to that disconnection and possibly low game time, the figures are simply not high enough.

Looking at his per 90 stats, Barrenetxea is a volume dribbler and a successful one at that. Of course, due to his limited game time, the total figures may seem low at first. The same is true for his crossing and despite not ranking high in the percentile rankings, his cross to pass ratio is very high.

But those two attributes often come together, the latter following the former. Before delving into in-game examples of both, let’s see what the data can tell us for our analysis. 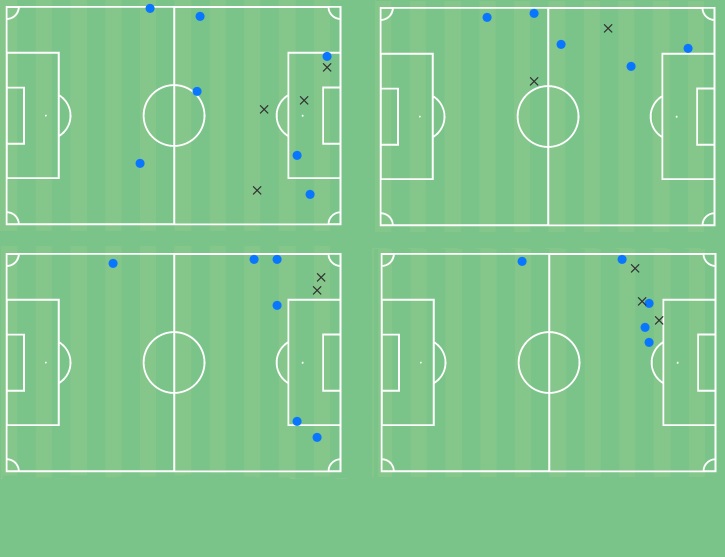 As a result of his deeper position, we can often see Barrenetxea engage in dribbles and duels in Real Sociedad’s half of the pitch. This is also connected to the progressive runs we mentioned earlier in the scout report. However, generally, the 19-year-old will hug the touchline and perform dribbles that allow him to create separation and cut inside to the half-space.

However, as was already mentioned, often the dribbles are followed by crosses, which are another formidable weapon in his arsenal. Generally, the 19-year-old prefers lofted crosses but there is a pattern worth mentioning here as well. 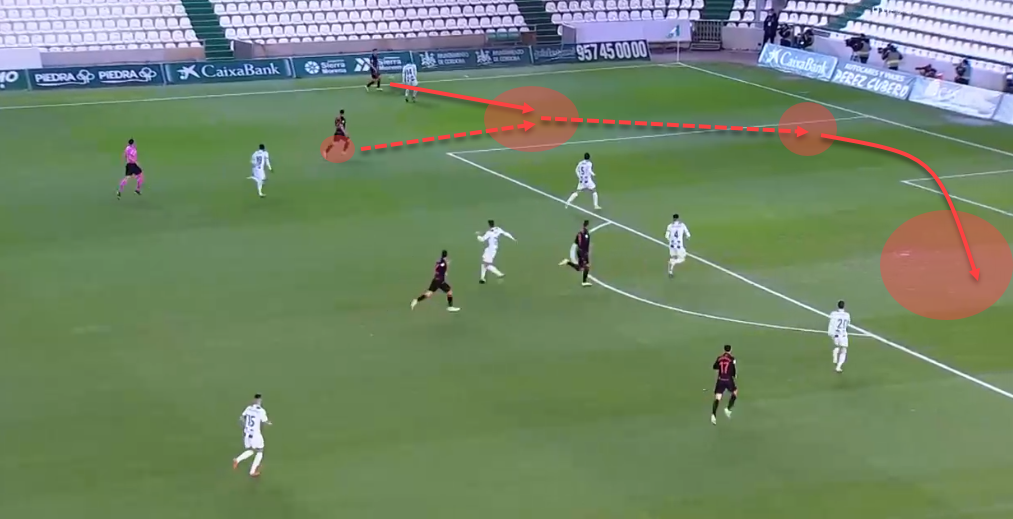 Barrenetxea will often cut inside into the half-space and then advance through that channel to receive the ball in zones 16 & 18, depending on the flank he’s been deployed on. We can see that in the image above.

That’s also where his dribbling ability often helps successfully cross the ball. Often, these tactics will ensure Barrenetxea is isolated with just one marker in that area and should he manage to beat him, the path towards goal would suddenly open.

Here’s another example that follows the same pattern, this time against Real Betis. Notice the same movement through the half-space channel and towards that same zone near the edge of the penalty area. 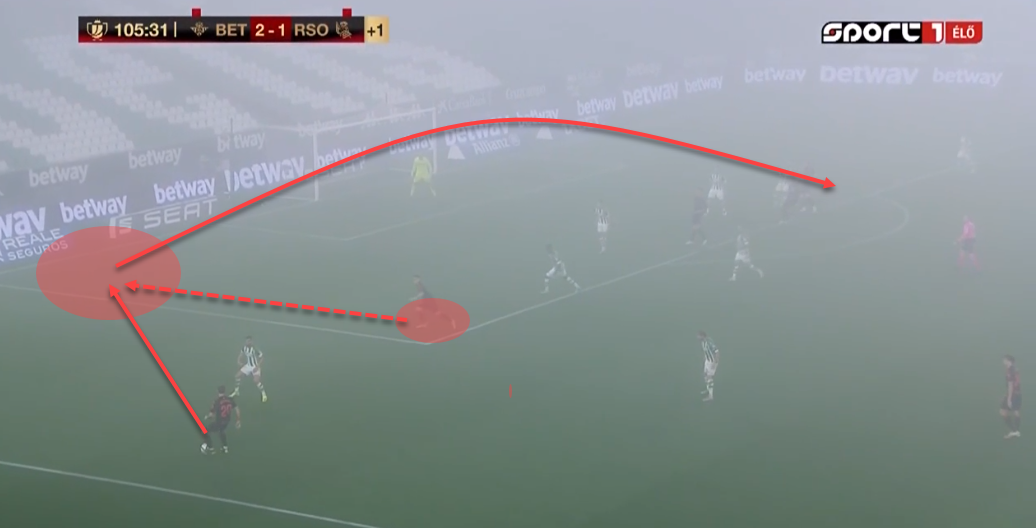 In both examples, Barrenetxea was followed by just one marker, which favours the attacker. This, however, was on the left side of the pitch where he will mostly underlap or cut in towards the middle channels. On the right, Barrenetxea will overlap and hug the touchline more often.

Our final example in this section of the scout report will show us exactly that and how the youngster can use pace, dribbling and space exploitation to get into a favourable position to cross the ball into the box, which was also evident against Manchester United in Europe.

This ticks all the boxes and showcases his main traits perfectly in just one image. 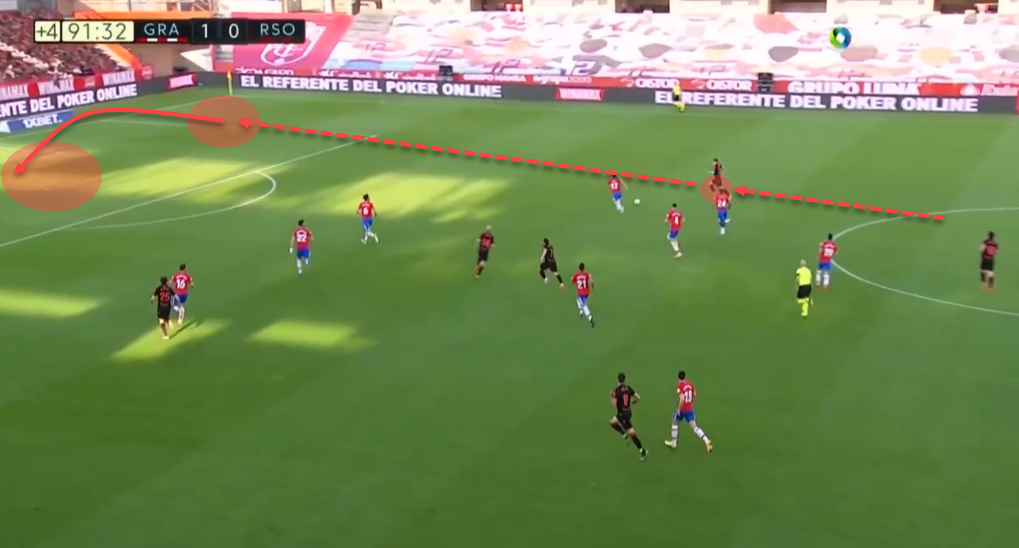 But despite obvious strengths and incredible talent, Barrenetxea is far from a finished product. The final section of this tactical analysis will outline an area he needs to improve on to reach the next level in his development.

Young players with little game time lack experience, that much we can agree on. And then, that inexperience leads to bad decision-making and can even affect confidence as a result. But it does feel like once Barrenetxea can improve on his final product, he’ll be ready to take the next step in his career.

Looking at the underlying stats, we can see that his goals per 90 put him among the best wingers in La Liga but that doesn’t tell the whole story. Barrenetxea has a very good long shot and his goals are often sensational strikes, just like the latest one against Barcelona.

But looking at the full picture, his decision-making on when and where to take his shots is far from perfect. The shot map below will tell us more. 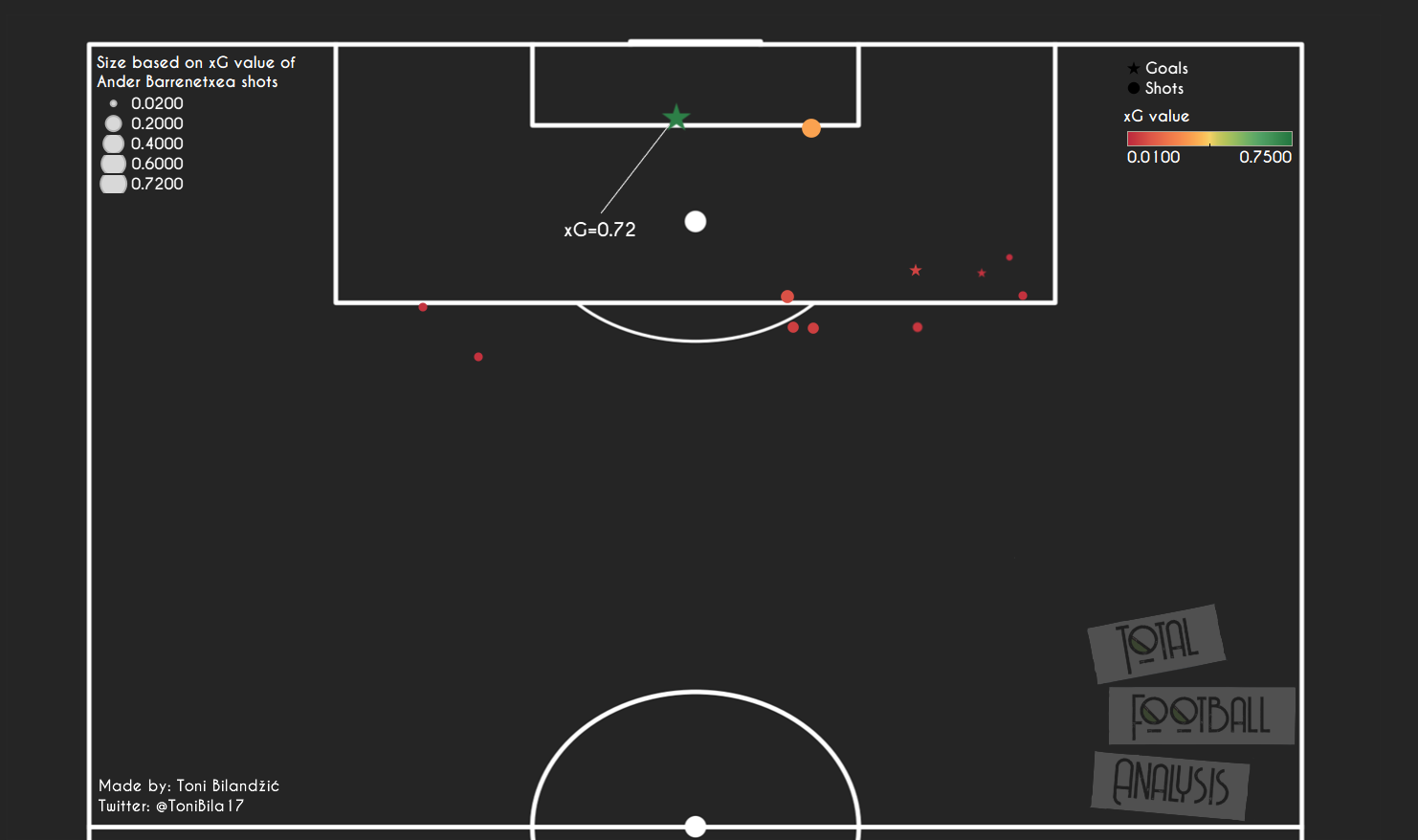 What we can immediately notice is his tendency to shoot from distance. Considering he’s still good at it, it’s understandable but not enough to warrant so many attempts.

This is especially true when we consider the wider context. In many of those situations, not only was shooting not the ideal solution but Barrenetxea was presented with a much better option through his teammates.

Let’s explore a couple of in-game examples next. 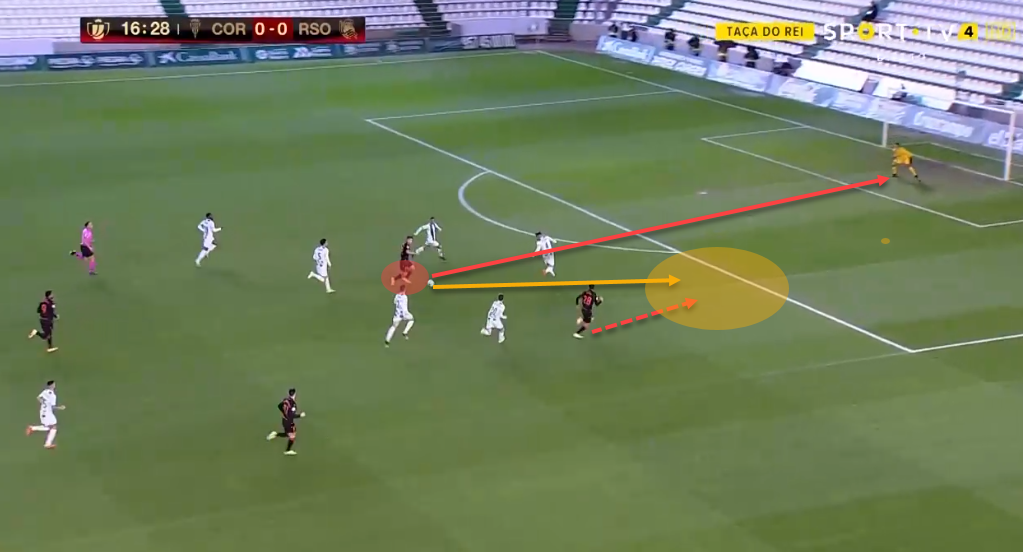 Here against Córdoba, Barrenetxea gets into an excellent position as La Real advance to threaten the goal. And even though the youngster has a teammate in a much better position to his right, he chooses to let loose from a difficult position. The shot is ultimately saved easily by the goalkeeper and the attackers waste an excellent opportunity to score.

A very similar thing can be seen in the next image against Osasuna. Barrenetxea does the first part of the job brilliantly, using his dribbling skills to create separation and cut into the middle channel.

Once that happens, he is presented with four choices, three of which are passes to his teammates and one is a direct shot on goal. 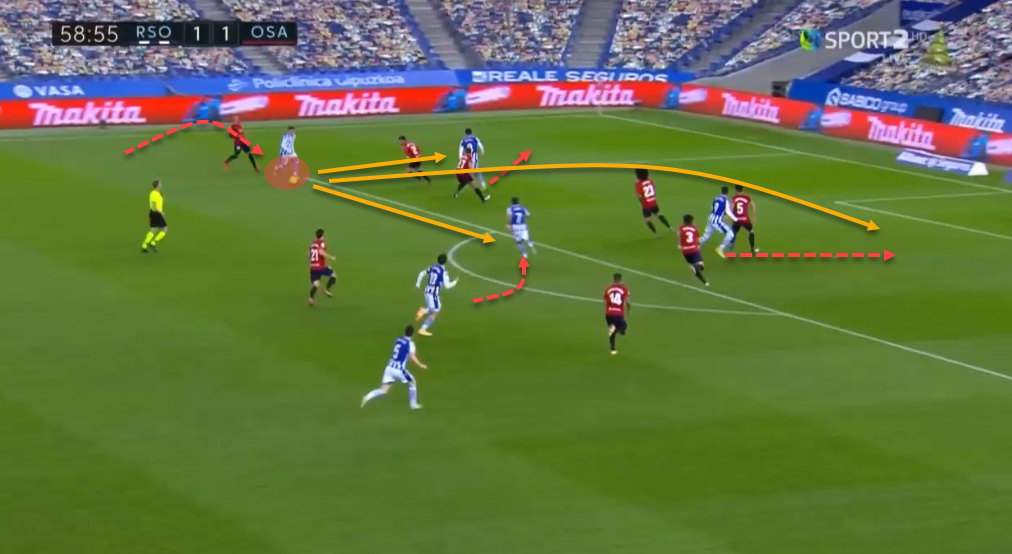 It has to be noted that by creating separation in that area of the pitch, Barrenetxea has effectively created enough space for himself to attempt this shot. For that reason, it could be argued that it’s even justified that he tried his luck in this instance.

However, it also has to be noted that there were other options on the table given the difficult position and the angle in this particular example. The shot ends up in the stands and Real Sociedad waste another valuable opportunity in attack.

Another weakness would be his passing game. Even though he has the vision for long balls and can thread key passes at times, he can sometimes seem disconnected from the rest of the squad. This then results in low involvement and an average at best passing metrics.

Ander Barrenetxea is a huge talent of Spanish football. With a low centre of gravity, great technical skill, flair and speed, the 19-year-old has what it takes to become an elite forward soon.

However, to get there, he still has some things to iron out but just like former Atletico Madrid star Antoine Griezmann before him, he skipped Real Sociedad’s B team to debut for the seniors, immediately signalling what a big prospect he was and still is.

Let’s see whether he can continue following the Frenchman towards stardom as well.