The 2019/20 campaign has been a very underwhelming one for St. Johnstone. The club has been very inconsistent, spending the majority of the first half of the season toiling around the foot of the table. Although, since the turn of the year they have seen an upturn in performances with the Perth club gaining a total of 18 points out of a possible 30 in the league – meaning that the Saints finished on a high before the season was ceased. The good form has lifted them out of regulation but that is the only thing Tommy Wright and the St. Johnstone faithful can clutch onto in a rather underwhelming season.

One thing the Saints can be optimistic about is the emergence of 20-year-old midfielder Ali McCann. Coming through the ranks at St. Johnstone, McCann got his first real taste of first-team action when he spent the second half of last season on loan with Stranraer. He put in impressive performances out on loan which saw him start this season’s opener against Celtic where he has kept his place in the starting line-up ever since for the Saints.

In his breakthrough season in the top flight, he has proved not just to be an exciting prospect but arguably one of the best young players in the league. In this tactical analysis in the form of a scout report, will examine how Ali McCann has become a key cog at the heart of St. Johnstone’s midfield. The report will also outline key attributes that make the 20-year-old excel amongst his counterparts in the midfield role.

When analysing McCann’s performances in the league, what you notice is his high energy, work rate, stamina, and his controlled aggression – this makes him have the quality to excel when defending in midfield. Wright has utilised these qualities where the young midfielder has played just over 1/3 of his matches deployed in the defensive midfield position in the Saints’ 4-1-4-1 formation.

There is real merit to deploying him at this position as he has the physical attributes to compete in midfield to win the ball back for his side. This is evident as he competes in 9.29 defensive duels p/90 with a 62% success rate which is impressive and shows he has the ability to break down attacks and protect his defensive line at a high level. What makes the Saints midfielder so good defensively is his ability to almost hound the opposition, coupled with this, he is also tenacious in the tackle which makes it difficult for the opposition to get past him.

Below against Hearts, Manchester City loanee, Ryotaro Meshino is looking to dribble past McCann but the Saints midfielder forces the Hearts midfielder back. 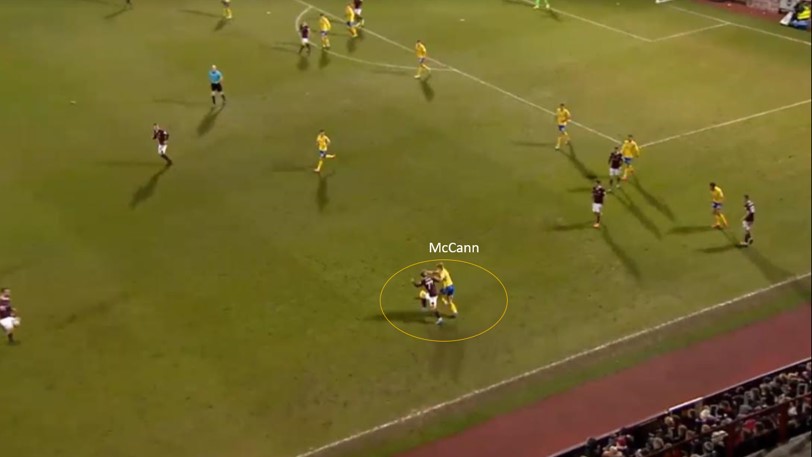 Despite Meshino attempting to twist and turn to get away from the 20-year-old, he has the stamina and persistence to keep trying to get the ball off the midfielder before putting in a well-timed tackle to win the ball back, breaking down the attack.

Another area where McCann excels defensively is his ability to read the game and snuff out danger as he has 4.96 interceptions p/90 which is the most by any midfielder under 21 in the league. It’s very impressive having such intelligent defensive positioning in midfield, which is an attribute you would associate with a more experienced player further down the line in their career.

The 20-year-old’s positioning is evident as he screens in front of his defensive line very well, as we can see below. McCann has great anticipation as he moves out of his central position, sensing the ball will be played into the Hearts’ striker. 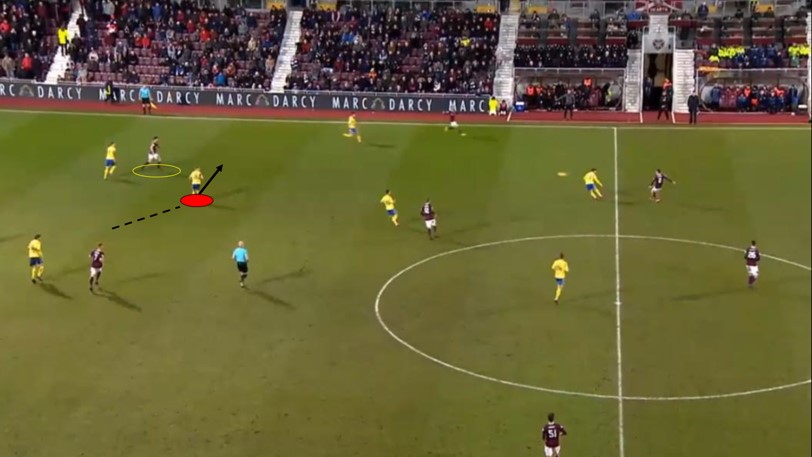 McCann cleverly delays his run across to open up the option for the opposition defender, lulling him into a false sense of security to play the pass. Once the pass is released, the Saints midfielder does a great job of protecting his defensive line as he has the pace to cut off the passing lane and intercept the pass.

McCann certainty excels in terms of his defensive capabilities in midfield but playing him in the pivot position limits the 20-year-old’s attacking abilities. The Saints’ manager understands that he brings more to his side playing as an ‘8’, being a more traditional box-to-box midfielder. By moving him into a more advanced position, he has the defensive capabilities to win the ball high up the pitch, where he has 9.54 recoveries p/90, 48% of them being won in the oppositions half, meaning he is winning the ball and creating attacking platforms from dangerous positions for his team.

The midfielder offers more than just winning the ball high up the pitch as he is the creative spark in the St. Johnstone team. McCann is extremely positive and forward-thinking with the ball at his feet where he is always looking to play the ball forward – 75% of his total passes are forward passes. The 20-year-old likes to operate close to goal and create goal-scoring opportunities where he plays 1.29 passes into the box p/90. Below we see McCann picking up the ball and driving by the Hearts defender into the box. He lifts his head up and spots Stevie May in a pocket of space and has the composure to cut the ball back to him to score. 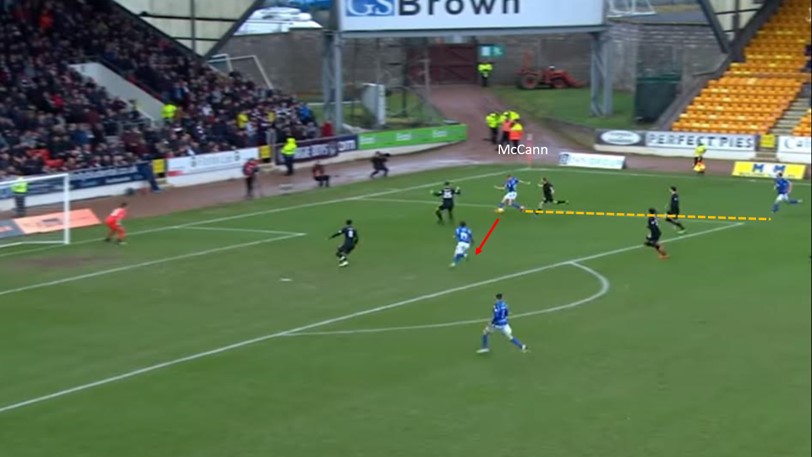 It is clear that the Saints midfielder is the leading contributor in creating chances for his team with 11 shot assists this season. The 20-year-old also has five second assists (basically an assist of an assist) in which he ranks third in the league, only behind Odsonne Édouard and Joe Aribo. This shows that McCann is crucial in the build-up of goals for the Perth club and his contribution is telling as he pulls the strings in midfield.

Along with creating chances, the midfielder has added goals to his game and has scored four this season. McCann has the energy and stamina to get up and support the lone striker upfront. Wright’s tactics look at being defensively sound and sitting deep before elevating pressure by hitting long balls up into the striker. McCann’s role is to make advance runs up the field, and with the 20-year-old’s great positional sense, he picks up a lot of second balls by essentially playing off the strike. This leads to him getting into more goal-scoring opportunities.

This is evident in the move below against Hamilton in December – the Saints midfielder shows his intelligent positioning as the ball is being challenged in the air by Callum Hendry and a Hamilton defender. The midfielder positions himself ball-side of his marker and anticipates where the ball will land and attacks and wins the second ballas it breaks to the ground. 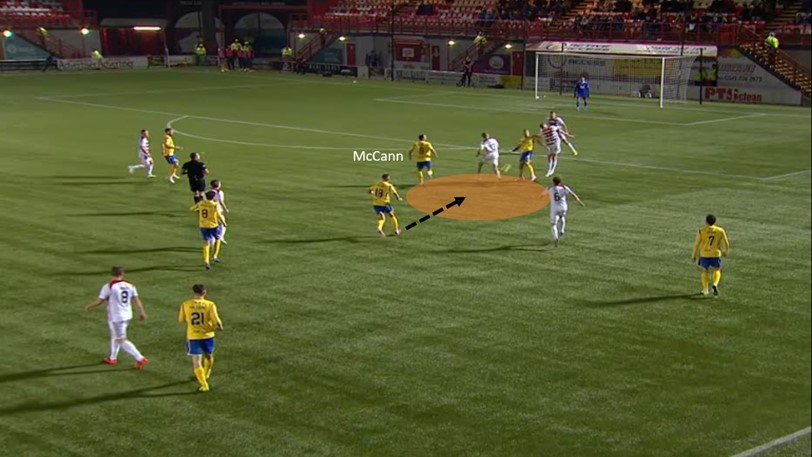 McCann progresses the ball to the edge of the box where he has the vision to see Hendry’s run as he plays him in with a through ball. After he makes the pass, he continues to make a run into the box. 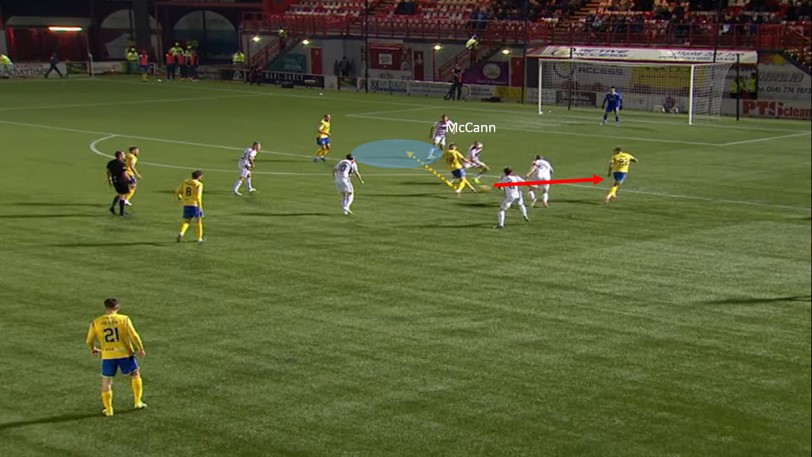 The midfielder doesn’t aimlessly run into the box, he identifies the space just inside it and positions himself in this pocket as an option for Hendry. The striker picks him out and he finishes well past the keeper. 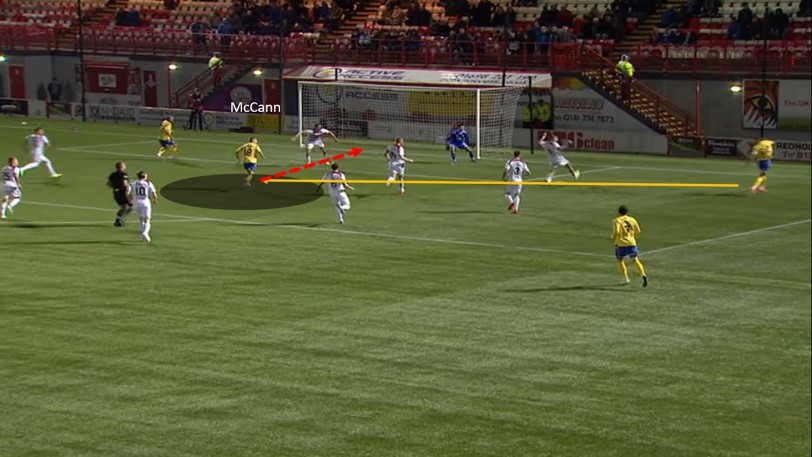 Overall, St. Johnstone have struggled to score goals with only Ross County scoring fewer than the Perth club in the league this season. In his breakthrough season with his goal and assist tally while also taking into account his second assists, McCann has been involved in 36% of St. Johnstone’s total goals this season, which is startling. This shows that the Saints midfielder is a vital cog in Wrights’s attacking phase with his ability to create and score goals.

In this analysis, the Saints midfielder excels both in an attacking and defensive sense and what the analysis has touched upon briefly in both the previous points was that he has great game intelligence in terms of picking up good positions in relation to his teammates, his opponents, and the ball. This is a skill that is hard to attain for players, especially at the early stages of their career.

McCann is certainly not flawless in this regard but he is showing the type of effective positioning and identification of space that is beyond his years, which is showcased in his movement off the ball. The 20-year-old will look to run beyond his striker or make a late run from deep. When St. Johnstone is in possession, the midfielders’ movement forward into space is so well-timed and executed that it creates opportunities to score.

The Saints midfielder is very good at making a late run from deep where he ghosts into space unmarked, like in the game against Aberdeen in February. Below we see that St. Johnstone are on a counter-attack. McCann is ahead of the ball and he looks to be marked but as the ball is progressed, he makes a blindside run off his marker. 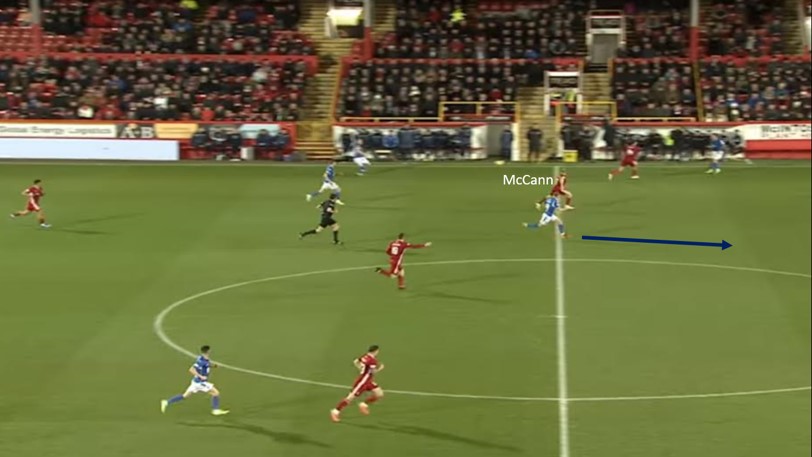 McCann’s identification of space and timing of his run is well executed as he ghosts into acres of space unmarked. He is played in behind where he bears down on goal before delectably chipping over Joe Lewis in goal.

Although questions can be asked of the Aberdeen defence here, McCann still has to make the blindside run and time it well or he would be tracked by his marker. 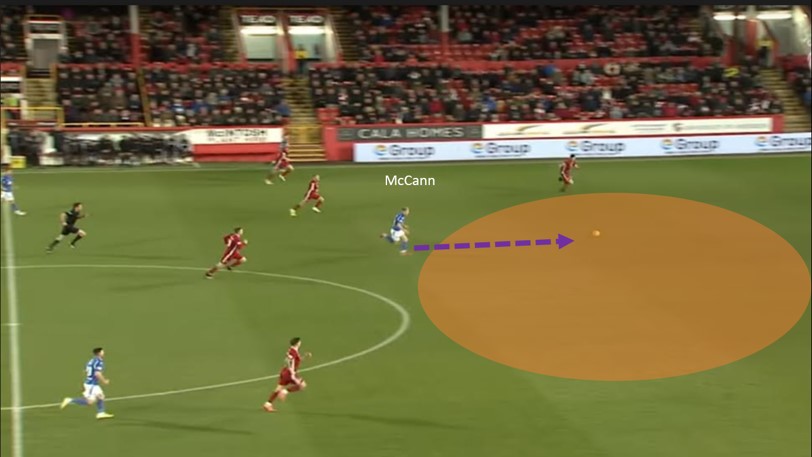 The St. Johnstone midfielder is also adept at providing effective movement in relation to the runs his teammates make, like in the move below against Livingston. St. Johnstone win the ball back and play it to McCann in space.

He then plays the ball out to Michael O’ Halloran on the right-wing. After the midfielder passes the ball off, he continues his run but delays it slightly, letting striker Chris Kane pull the two defenders with his movement towards the right side. 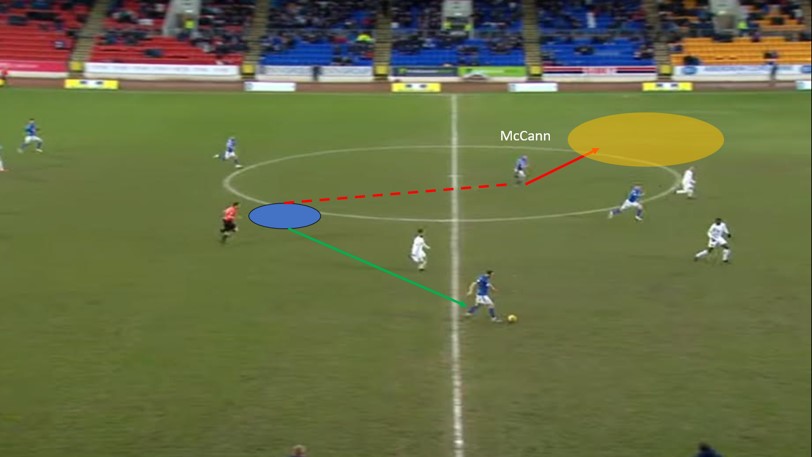 McCann identifies the space on the ball-far side and thanks to the run by Kane, the two defenders both engage in him, leaving more space out on the far wing. McCann attacks that space and is free but the ball by O’ Halloran that is fed to him is slightly too long and behind him so the opportunity is lost.

Which such poor service and limiting opportunities to score, like the above example, one area the midfielder should look to improve on is his shot accuracy with only 27% hitting the target. With St. Johnstone performing so poorly in goals scored in the league and relying on McCann so much for goal contributions, he should look to focus on this area to bring his game and the Saints to a new level.

St. Johnstone have unearthed an exciting prospect in Ali McCann and he has become a key cog in Tommy Wright’s midfield where he has contributed hugely to both attacking and defensive phases of play, as shown in this analysis. Despite only being a 20-year-old player, he has the positioning movement and overall game intelligence that is certainly beyond his years.

The midfielder’s progress in his first season in the Scottish Premiership is startling and he is shone in a St. Johnstone team that has underwhelmed. Bigger teams will certainly be monitoring the Saints midfielder and rightly so but for now, he stays plying his trade on the McDiarmid Park turf. 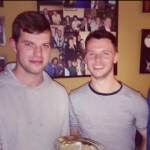