8 months into his Manchester United career, the jury is still out on whether Alexis Sanchez is a good fit for Jose Mourinho’s side. During his time at Arsenal, Sanchez was The Gunners’ leading forward, whether playing on the left-wing or as a central striker. The Chilean’s pace, aggression and high work-rate together with his world-class finishing ability made him one of the Premier League’s very best goal scorers during his time in north London.

When Manchester United beat rivals Manchester City to the signing of want-away Arsenal forward Sanchez, the red half of Manchester believed they were getting a player who would instantly bring their forward-line back among the domestic and continental elite. But 3 goals and 6 assists in 22 appearances for The Red Devils is a return below expectations and Sanchez has had his fair share of criticism for his perceived lack of form. But is it the former Barcelona man’s form that needs improving? Or is his Sanchez evolving and adapting to a new role in his new team?

While Sanchez spent most of his Arsenal career playing on the left-wing of Arsène Wenger’s attacking 4-2-3-1, his most prolific season for The Gunners came in 2016/17 when Alexis played most of his games as a central number 9. But since Sanchez’s arrival in January of this year, Jose Mourinho has preferably deployed a 4-3-3 system with Alexis positioned wide left of the front 3.

Despite common misconceptions, Jose’s United look to dominate possession in most games that they play, particularly when they face supposedly inferior opposition. United typically play a holding number 6 at the base of midfield (usually Matic although lately it’s been Fellaini) which gives cover to the full-backs who are charged with getting up the pitch and supplying United’s wide options in the attacking phase of play. With Luke Shaw re-emerging as United’s first choice left-back, Jose’s side have a left-back who can dominate the left flank single-handedly and this allows Sanchez to drift inside and get closer to Romelu Lukaku.

In tandem with Mesut Özil at Arsenal, Sanchez was part of a world class duo at The Emirates. Özil the mercurial creator and Sanchez the tenacious goal-getter. But perhaps that role masked Sanchez’s creative talents and his eye for a pass. Given that he plays a supporting role to Romelu Lukaku in this United team, Sanchez has adapted his game and showed he can mix it with the best of them when it comes to key passes.

Lukaku is the focal point of the attack and leads the line with his sheer size, athleticism and intelligent movement, much like the role Didier Drogba, Diego Costa and Diego Milito have previously filled for Jose Mourinho’s Chelsea and Inter sides. With Sanchez given licence to drift closer to the Belgian striker as mentioned previously, the two have seemingly struck up an understanding which is evident in the amount of key passes that Sanchez plays to Lukaku. In fact 3 of his 6 assist for United have been for the former Everton striker.

It’s evident in open play when Sanchez receives the ball on the left flank for United, Lukaku immediately looks to make a run into space, whether that be behind the opposition’s defence or in between the defensive line. This type of partnership will only get stronger the more Sanchez and Lukaku play together and the early signs of their mutual understanding on the pitch are very promising.

So what’s the issue?

Expectations. Alexis Sanchez is on ridiculous wages at Man United, the type of wages United could have used to sign 2 world-class centre-backs. At Arsenal Sanchez was an elite European level goal-scorer and was considered one of the best forwards on the continent. But since he’s arrived at Old Trafford, Alexis has underwhelmed most United fans who were expecting to see a bonafide world-class forward to complement Lukaku.

Instead, most fans now think Sanchez’s best days were always behind him, that he isn’t worth what he’s being paid and mostly, that he hinders the development of Marcus Rashford and Anthony Martial as he plays in their preferred positions. Additionally, Sanchez is only 11th among United’s most frequent passers this season and 9th among his teammates in the number of touches he’s had yet he is The Red Devils’ 3rd most dispossessed player. 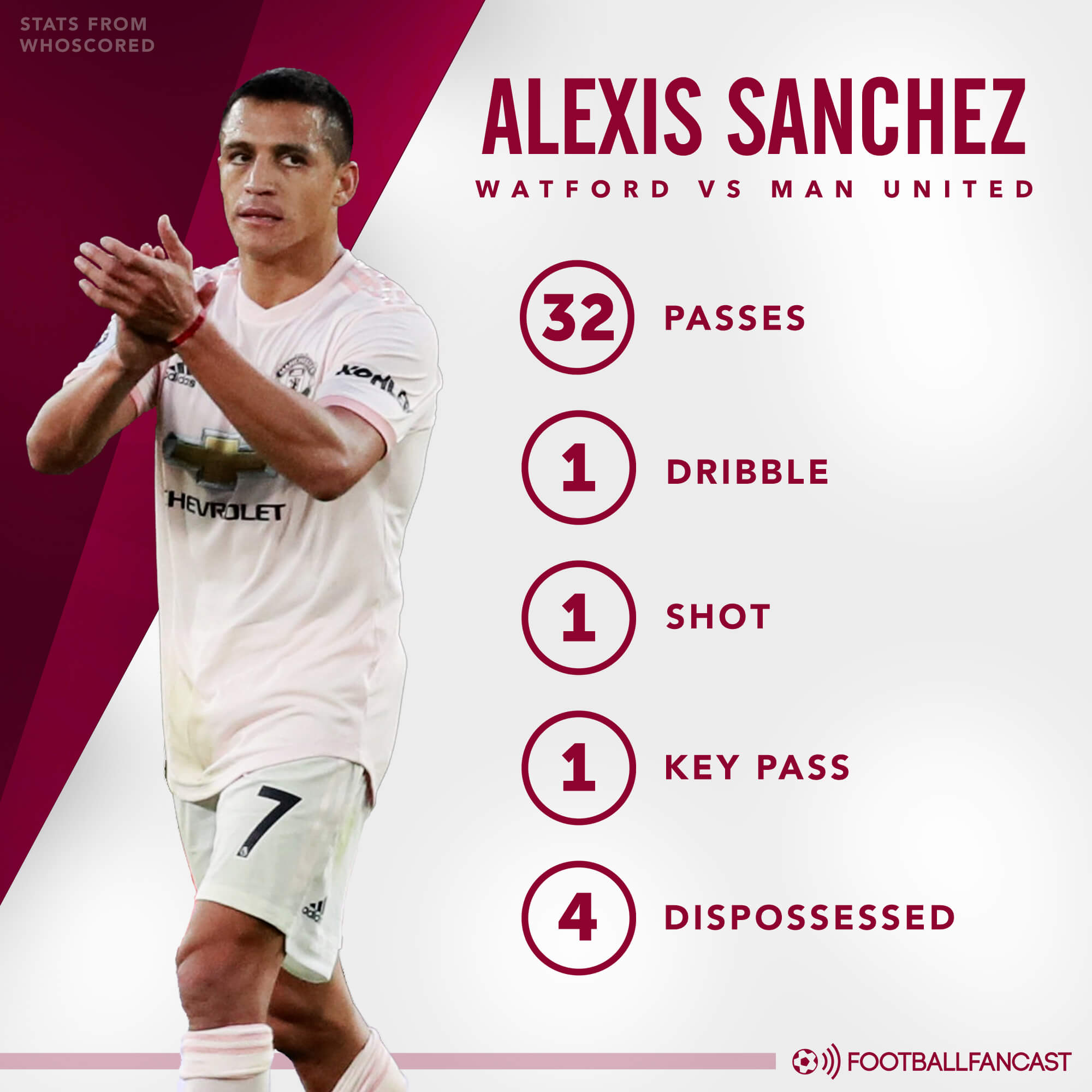 But this isn’t necessarily a negative stat, the likes of Messi and De Bruyne were among the most dispossessed players in European football last season. What it proves is that these players, including Alexis, are trying things. They aren’t afraid to get on the ball in any situation and prefer to fail trying repeatedly rather than hide behind safe passes to maintain successful passing rate statistics.

Alexis Sanchez might not be among the best at retaining possession but it’s not why he’s selected by his manager, he’s needed to be daring and positive on the ball. It’s these traits that made Sanchez arguably United’s most influential player in their biggest games of last season, scoring against Spurs in the FA Cup semi-final and having 2 assists in that epic Manchester derby comeback. His creative spark has already been influential for United this season.

Perhaps Alexis Sanchez has not been the player United or their fans thought they were getting from Arsenal but to the Chilean’s credit, he has adapted to a different role under Jose Mourinho. No longer tasked with being his side’s chief goal scorer, Sanchez has displayed his creative qualities at Old Trafford and showed a willingness to adapt in his new surroundings.

No, we have not seen 20-plus goal a season scoring form from the Chilean forward but perhaps we’re missing the point. Sanchez was brought in to replace an outgoing creative midfielder, not a leading goal-scorer and the evidence shows he is fulfilling that role for his new team and his giving his manager reason to pick him every week. His potentially world-class strike partnership with Lukaku gives United fans a lot to be excited about and the form of Luke Shaw at left-back could also be a loosened restraint on Alexis should it continue. Should he stay fit then the signs are Alexis Sanchez will prove his significant worth when the season’s biggest moments arrive.