The last two transfer windows has seen an influx of foreign talent enter the FAWSL, most notably from the United States. Christian Press and Tobin Heath both joined Manchester United Women in the summer of 2020 as did Sam Mewis and Rose Lavelle to Manchester City Women. The American stars all wanted regular game time and new pastures to test their mettle in another competitive league.

Most recently another USWNT star has decided to cross the channel in Abby Dahlkemper. The centre-back plyed her trade at North Carolina Courage but with the next NWSL league season still a few months away, she decided now was the best time to make a permanent move across and join Gareth Taylor’s Manchester City side.

This scout report will look at Dahlkemper and the traits she possesses which will benefit her new team. We will also analyse how she’ll fit into the tactics and whether or not Dahlkemper is a good fit for City or not.

Abby Dahlkemper is a 27-year-old central defender and her team’s main ball progressor. Her role is that of a ball-playing centre-back where she is the team’s main source of progression through her impressive on the ball skills and range of passing. Blessed with pace, Dahlkemper is also a good covering defender which makes her a very good fit for a team that plays a high defensive line.

To begin this analysis, it’s important to highlight Dahlkemper’s most impressive trait which is her on the ball skills mainly her passing ability. As we’ve mentioned already, she has been her team’s main source of progression by playing out from the back. Whether it’s receiving passes from the goalkeeper or back passes from midfield, Dahlkemper looks very assured in possession and is always looking for forward passing options. 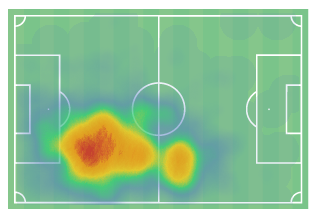 Dahlkemper’s heat map indicates that she is very active outside of the 18-yard box and is not afraid to push up illustrating how high she plays in her teams. This plays a factor in how she’s able to influence her team’s build-up and ability to play more dynamic and risky passes. A lot of her passes for the Courage were longer passes out to the forwards or full-backs. Given their heavy possession style of play, the Courage were afforded space coming out from the back where Dahlkemper was able to play out her trademark passes as the image below shows. 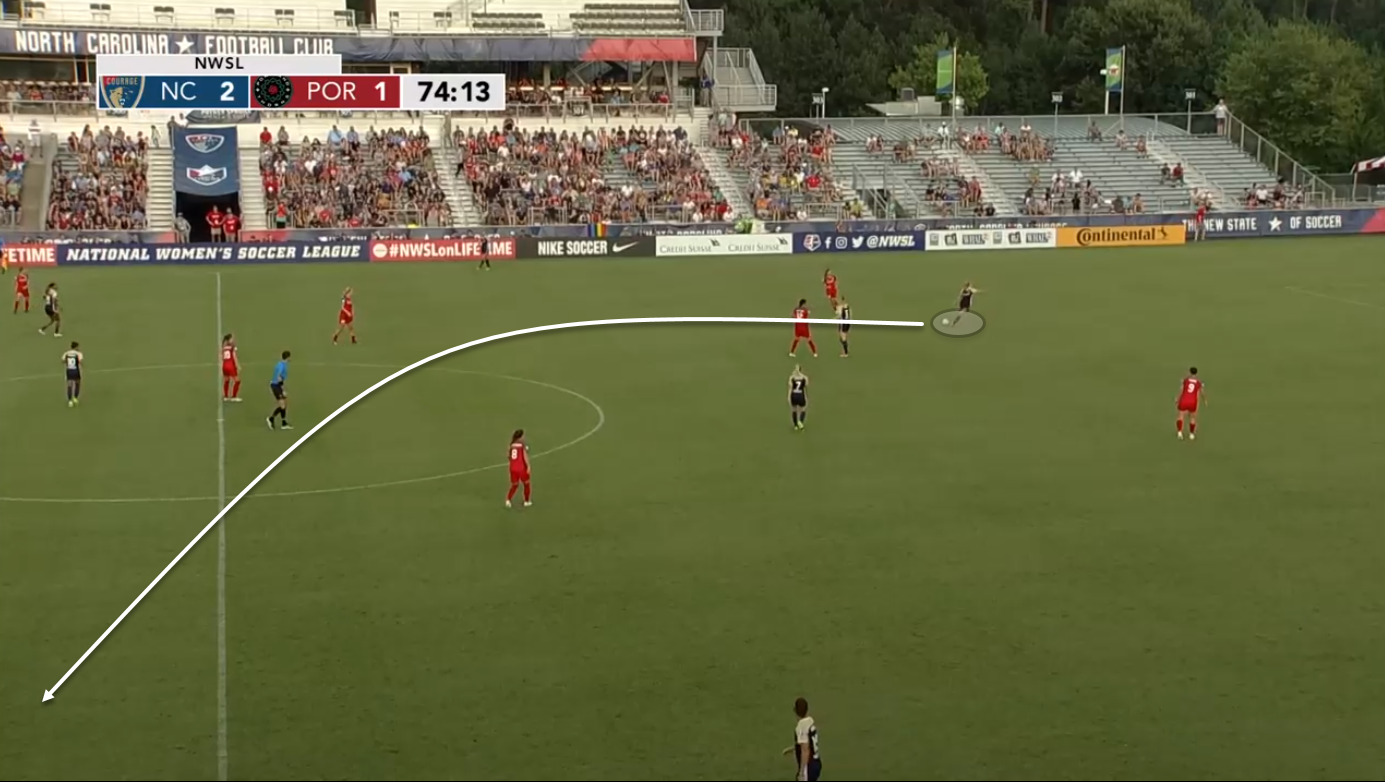 It’s in these situations where she excels and is able to play pinpoint passes out to her forwards. Given there is no real passing option for Dahlkemper she has to opt for a long pass. Here she’s not under any such pressure because of Portland Thorns want for the Courage to go long. She is able to identify the vacant space out wide where she can bypass the Portland heavy midfield. 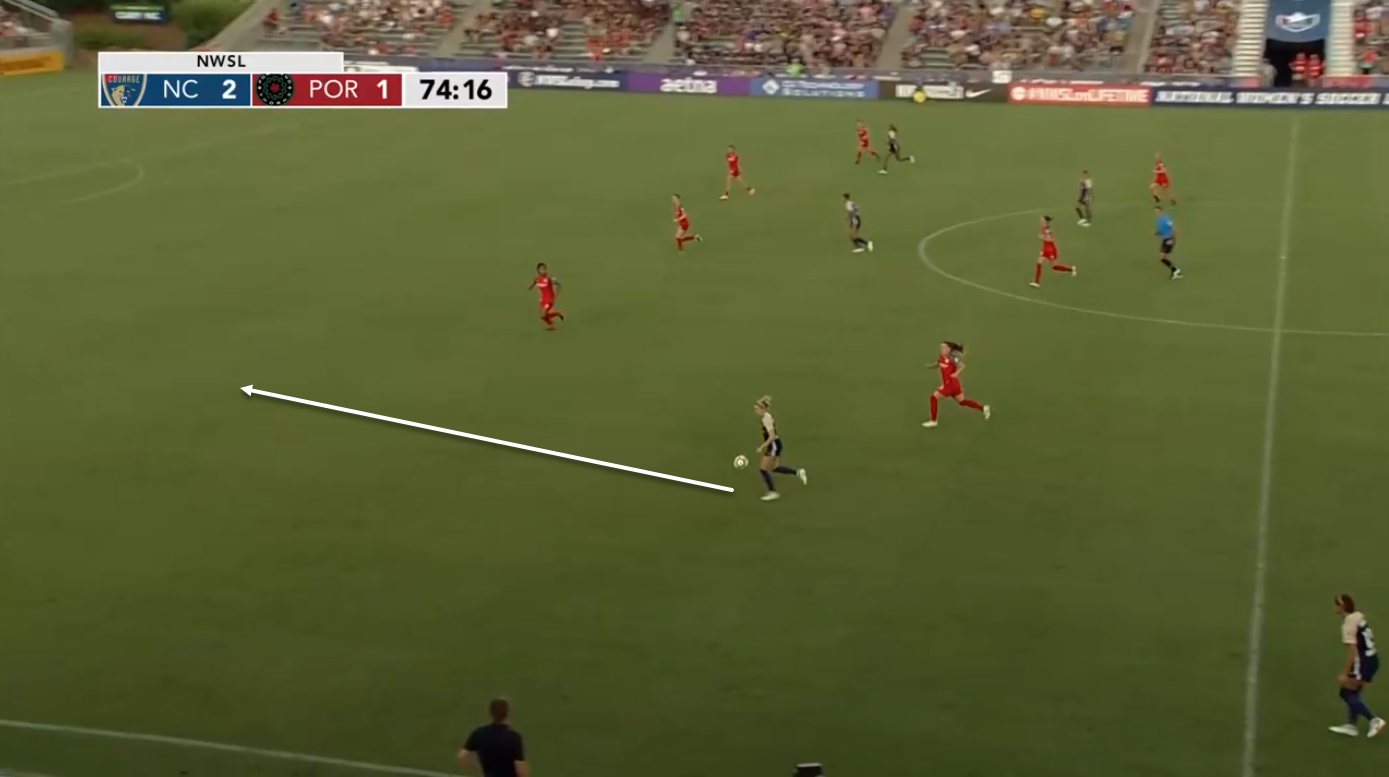 Dahlkemper’s one pass is able to cut straight through and play her wide forward in where she’s able to attack the vacant full-back position. It’s this intelligent passing that makes the defender such a valuable passing asset from the back. Dahlkemper registered decent passing statistics in 2020 with 8.32 long passes per 90 minutes (58% accuracy rate), 8.32 passes to the final third per 90 minutes (64.8% accuracy rate), and 20.95 forward passes per 90 minutes (77% accuracy rate). All of these figures show a high frequency of penetrative and progressive passes with high success rates which merits her strengths and style. The pass map below is from an NWSL match against Houston Dash where you can see most of Dahlkemper’s (#7) passes are longer with her only real short passing option being the near-sided full-back. This could benefit greatly given they have wide players who like running in behind like Janine Beckie or ball carriers in Chloe Kelly and Lauren Hemp. 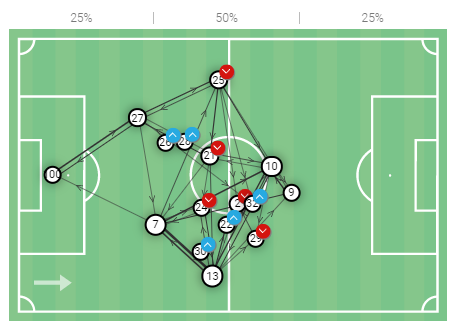 From an actual defending point of view, Dahlkemper brings certain qualities that we’ve already alluded to earlier. A covering defender who has pace to be able to stop teams from running in behind. Both the Courage and City play with a high line given their full-backs possess immense pace and good positioning. In City’s case, this is more prevalent where Lucy Bronze and Demi Stokes are much more balanced and have the ability to move up and down the flank.

Dahlkemper has decent positioning skills which makes up for part of her high positioning in games. Given she has the majority of possession, her defending is mainly down to covering long passes over the top or through the channels from opposition teams. Just as the image below portrays, you can see an example of Dahlkemper making up ground to cover the lone striker. 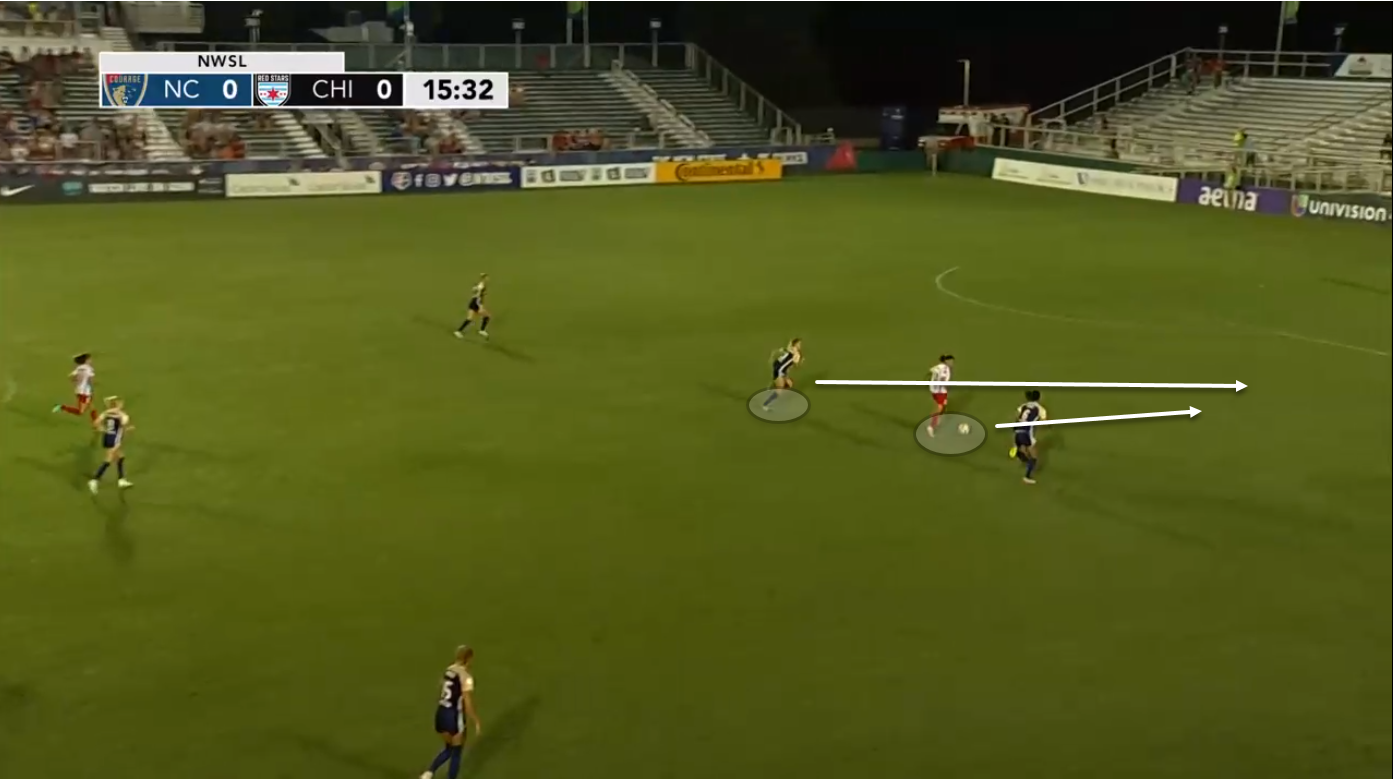 Here, the ball is played through the middle for Sam Kerr to latch onto and given the space between the Courage defence this seems like a very opportune moment for the Red Stars to score. The defensive line was caught high up the pitch in a counter-attacking move which takes advantage of the spaces in behind. However, Dahlkemper’s pace enables her to get back to try and engage Kerr in a duel. 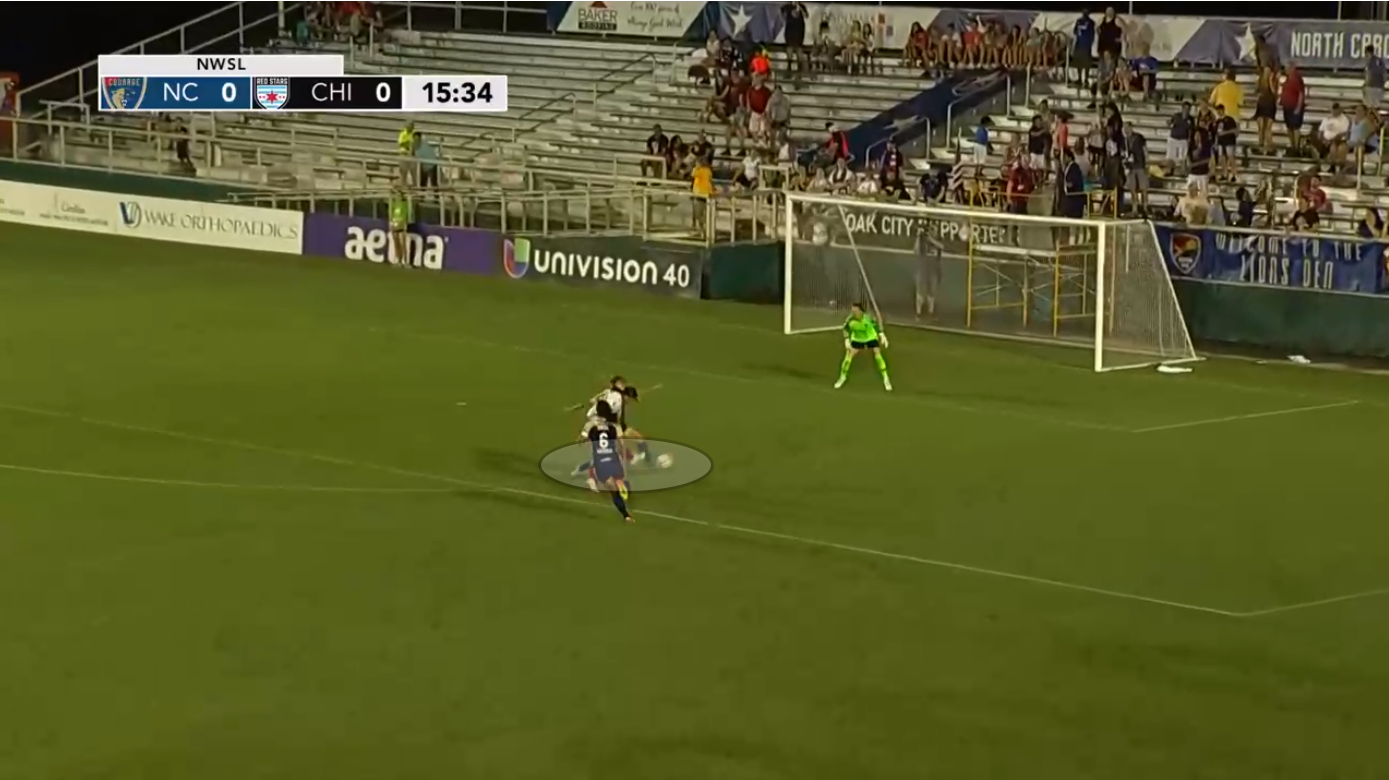 She manages to get back and outmuscle Kerr and get in a block to ensure there is no effort on goal. This sort of last ditch defending is where Dahlkemper shines and makes her such a good covering defender. The statistics at the time of writing show that she makes 9.76 recoveries per 90 minutes and 2.87 interceptions per 90 minutes. Given she’s a central defender who mainly covers spaces, these are pretty good numbers. However, her main downfall comes in 1 v 1 engagements.

One of the main weaknesses in Dahlkemper’s game has been her ability to consistently perform in 1 v 1 duels against quick forwards. Many a time you’ll see her get into a good position setup to defend against the 1 v 1 but is let down by her decision making. Whether she needs to press or back off, Dahlkemper won’t always make the best decision which as led to a number of shots against her team. 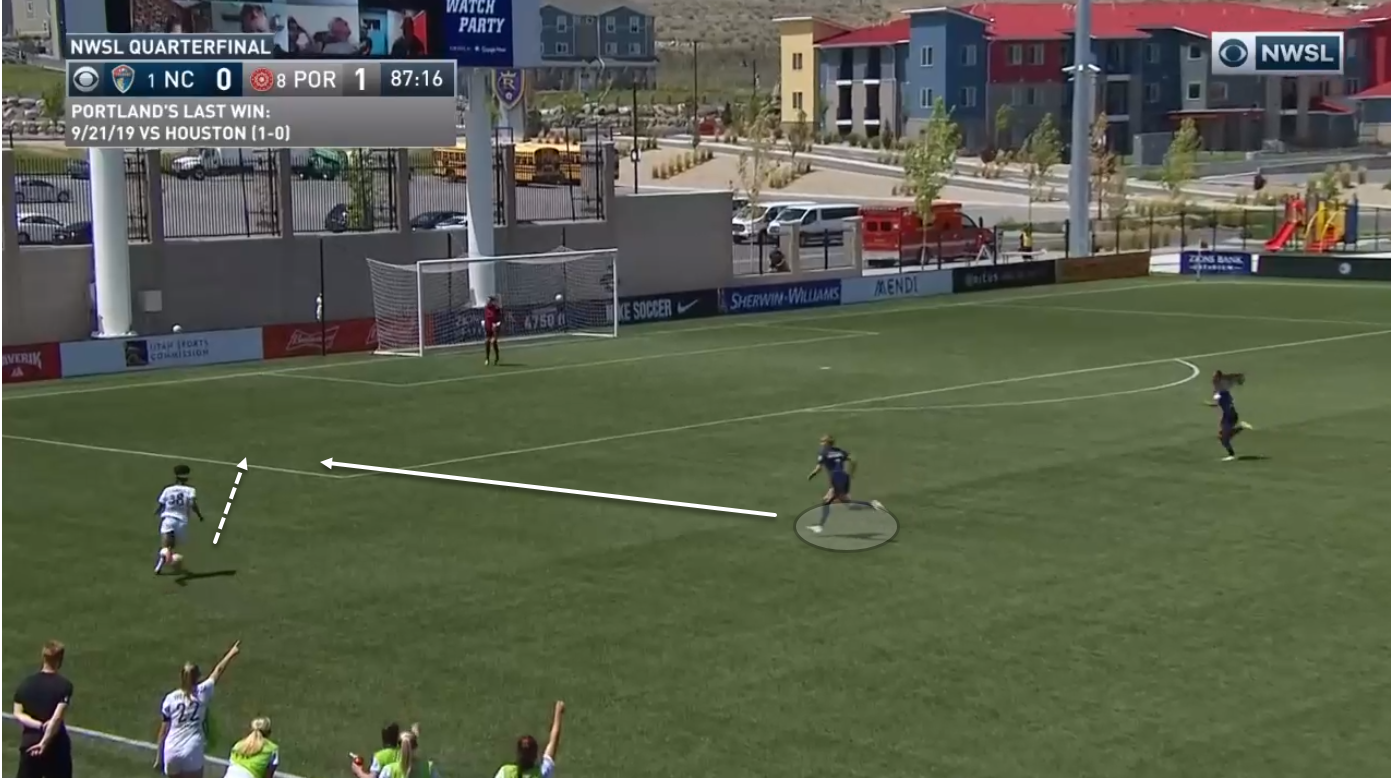 In this example, once again you can see Dahlkemper tracking back to cover the space in behind to isolate the Portland Thorns winger to try and stop the player from cutting inside and shooting. 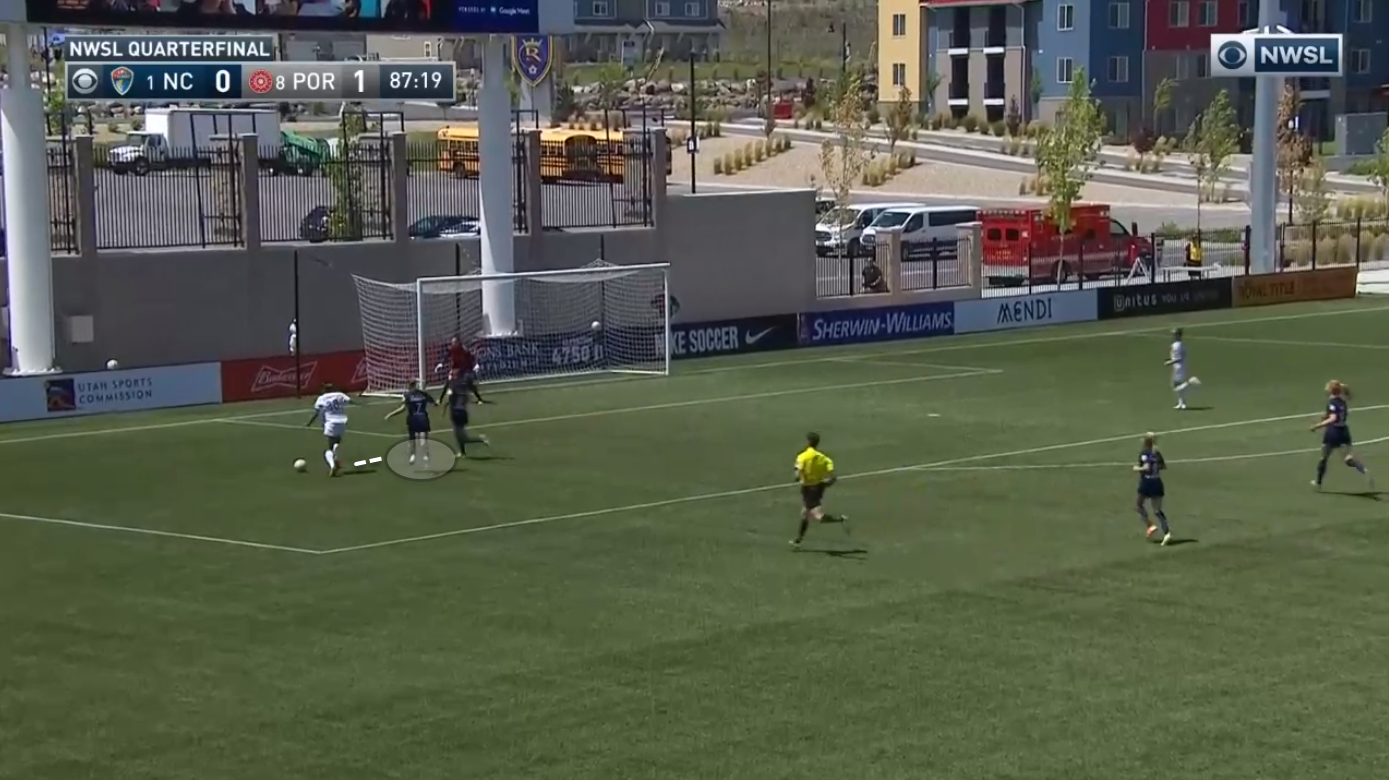 In this phase of play, Dahlkemper gets into a decent position but isn’t getting tight enough to player even though her partner has also come across. The winger manages to get a shot away even from this position which shouldn’t be the case. Her statistics in this regard are supportive of this fact with an average of 3.39 defensive duels per 90 minutes (64% success rate). What we can derive from this is that she isn’t very frequent in duels given she isn’t the ‘stopper’ centre-back but also because of her weakness in defending alone. The 64% success rate is down to coming up against centre-forwards who don’t see much of the ball given North Carolina Courage hold the majority of possession.

At Manchester City, Gareth Taylor has adopted a similar approach with playing out from the back and currently has Steph Houghton as his go-to player for that role. However, while she is adept at playing out from the back, Taylor is keen on adding more experience and craft in that area given they have had some struggles against high pressing and counter-attacking teams.

One of the biggest problems City have faced this season is their playing out from the back has not been up to scratch. Their sloppiness in passing has led to balls being given away in dangerous areas, especially against high pressing teams who have been able to cause mistakes. These have led to goals and given the full-backs are positioned slightly higher in build-up it means the centre-backs and defensive midfielder need to be excellent in possession and be able to break lines of press. 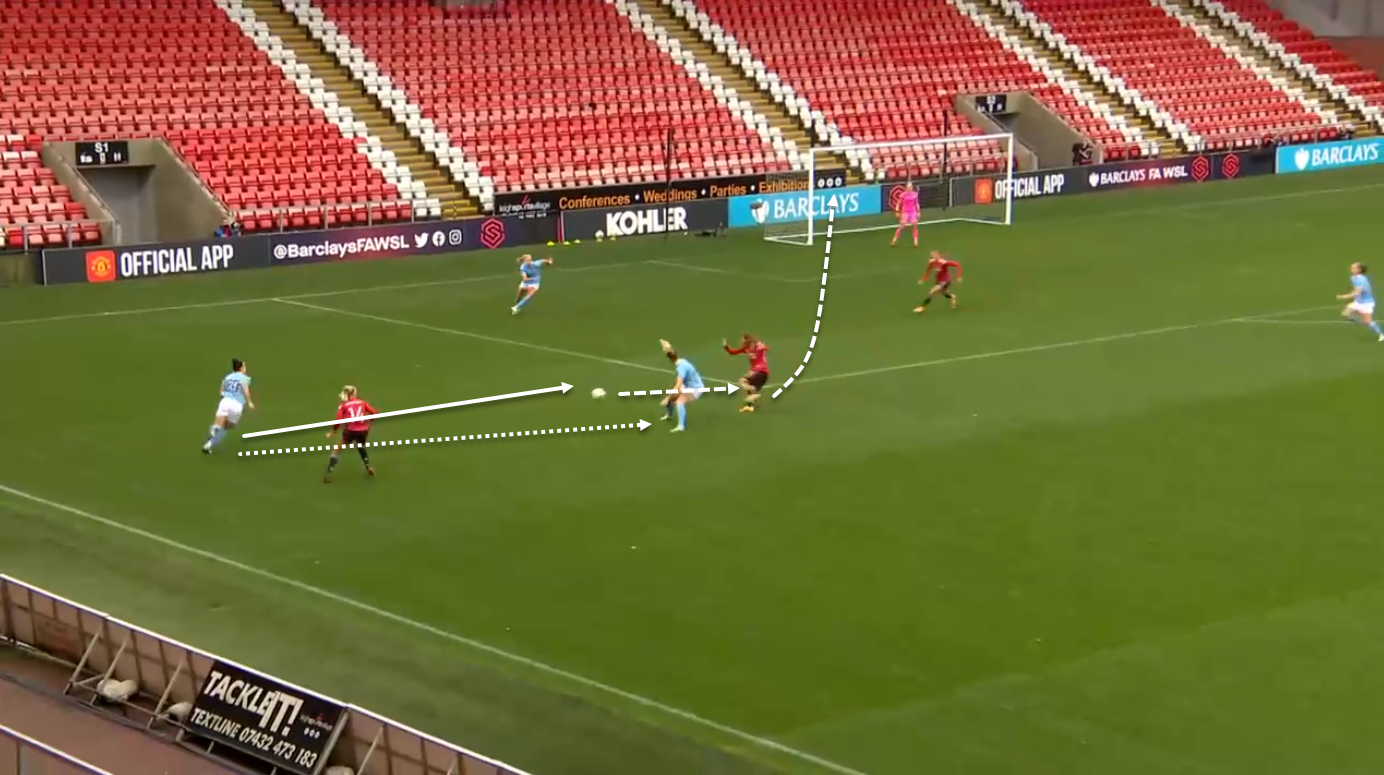 The above example against Manchester United Women portrays the issues perfectly. City are playing out from the back and passing between each other but United who are known for their notoriously high pressing are applying a lot of pressure and isolating the City defenders into pockets. The ball from Mewis to Bronze forces the right-back to play it back to her midfielder under pressure but this return pass goes wayward. This is down to the pressure caused by the United attackers. 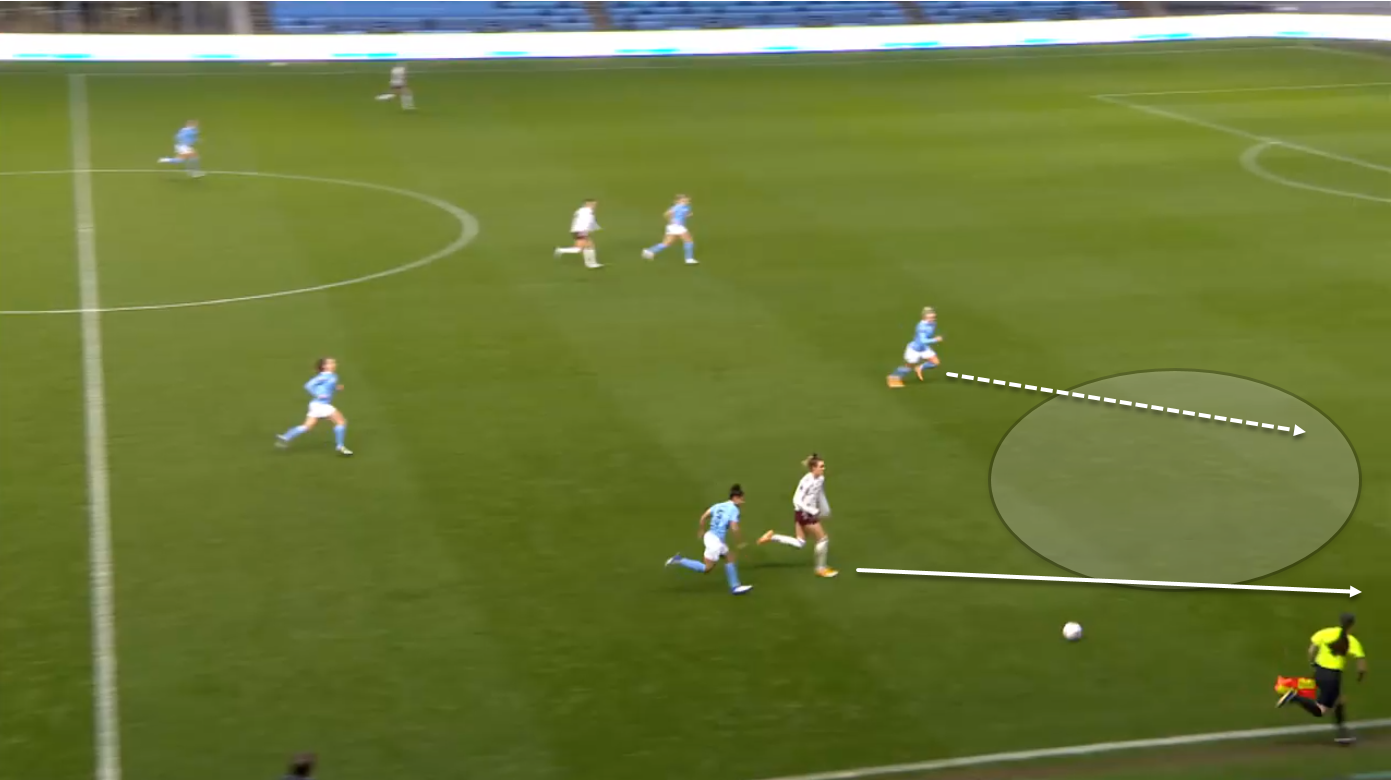 Here, Arsenal have played a quick ball down the right flank for Jill Roord to chase exploiting the high positioning of Stokes at left-back. This forces the centre-backs to be much more cautious and have to make better decisions when it comes to covering and making inch-perfect tackles. In this sort of situation, Dahlkemper would be able to use her pace and covering ability to deal with this sort of ball.

Playing Greenwood at centre-back has its perks but being a full-back her abilities to deal with more robust centre-forwards might be an issue going forward. With Gemma Bonner out of favour, it makes sense for Dahlkemper to come in and complement the aggressive Houghton who can safely press players. This could even signal a change in defensive tactics where City can shore up their passing out from the back and play a bit more expansive football through the central defenders that can break lines of press. Both centre-backs will be capable of pushing up and play line breaking passes into the forwards.

Overall, this tactical analysis has shown the qualities that Dahlkemper possesses and what she might bring to Manchester City Women. Given her experience in playing for a top NWSL team and world champions, Dahlkemper strengths should compensate for her weaknesses given the players around her. Houghton being another excellent ball-player and aggressive centre-back should complement the Amercian and given the high flying full-backs, she should be able to cover her flank quite well.

We’ll see how long it takes for Dahlkemper to settle into life in England. Either way, City are getting a very good and capable ball-playing central defender with a wealth of experience.