Though it took longer than initially expected, Nicolas Raskin has become a standout player for his boyhood club. Born in the city of Liège, Raskin started his youth career at Standard Liège. However, his first-team breakthrough instead came at Gent, where, at the age of 16, became the youngest player to feature in the Belgian Pro League born in the 21st century. Finally, in 2019, Raskin moved back to Standard and has been a key player for them since, with a few big clubs, most notably Leeds United of the Premier League, sniffing around this winter transfer window.

This tactical analysis and scout report will look at what makes Raskin such a good midfielder player, and illustrate why clubs like Leeds are interested in signing him now. 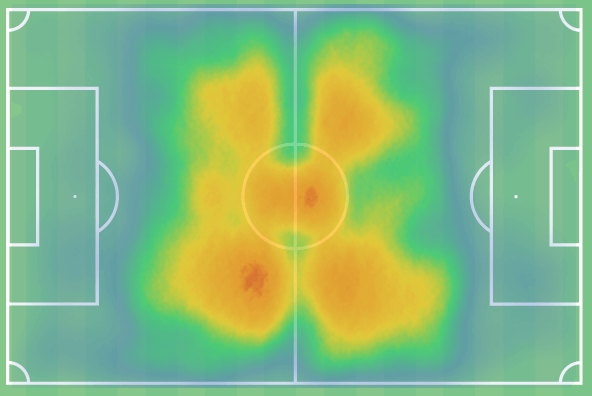 Raskin is very much a deep-lying playmaker, as the heat map above shows. He does not really get involved in either of the 18-yard boxes, rather, he prefers to stay in the middle third of the pitch, where he can use his great range of passing to spray passes to teammates anywhere on the field. He likes to roam vertically from touchline to touchline, using his excellent ability in 1v1 duels to help win the ball back for his side.

Different types of passes in his locker

What Nicolas Raskin does really well in his deep-lying playmaker role is his ability to spray passes anywhere on the pitch. Whether it is a long diagonal to pick out a teammate on the opposite side of the pitch, a through ball to play a teammate into space, or a simple three-yard pass, Raskin has all of them in his locker. Through this season’s Pro League so far, Raskin has attempted, on average, 37.75 passes per 90 with an 82.1% success rate. He also attempts 2.43 long passes per 90 with a 55.3% success rate. As the examples below will show, the diversity in Raskin’s passing make him a tricky player to close down, as he could surprise everyone with the passes he can sometimes make. 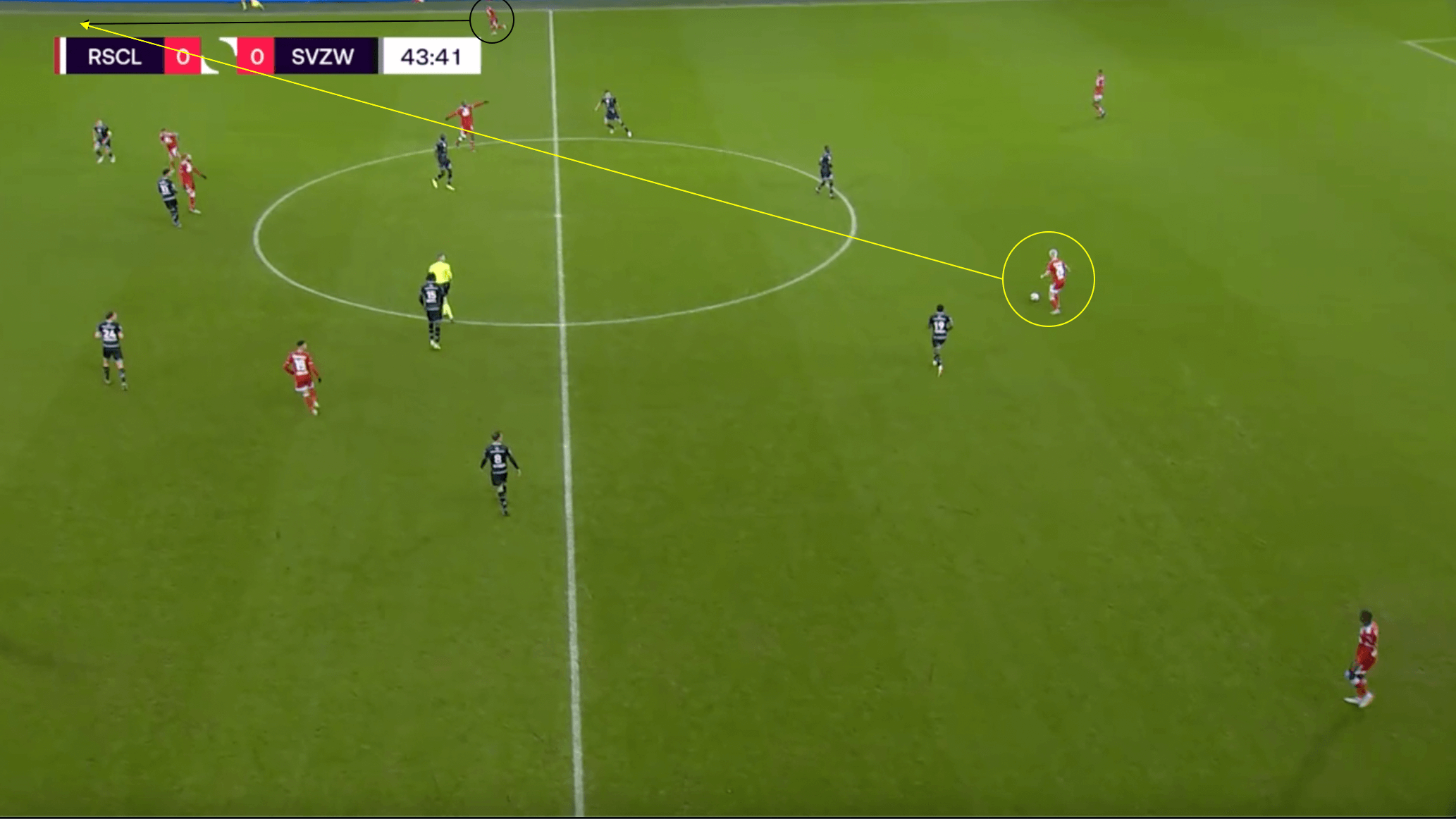 The image above shows a great example of the range of passing that Raskin has in his locker. Raskin, circled in yellow and in possession, is looking for a passing option. The midfield is congested, meaning his only options are to play the ball back to one of his centre backs or the goalkeeper, or playing a long ball. The Standard full back notices the space being left down the far touchline and makes a good run into the space. Raskin notices this and plays an absolutely perfect ball into his path. This results in a chance for Standard, after what looked like it could become wasted possession. 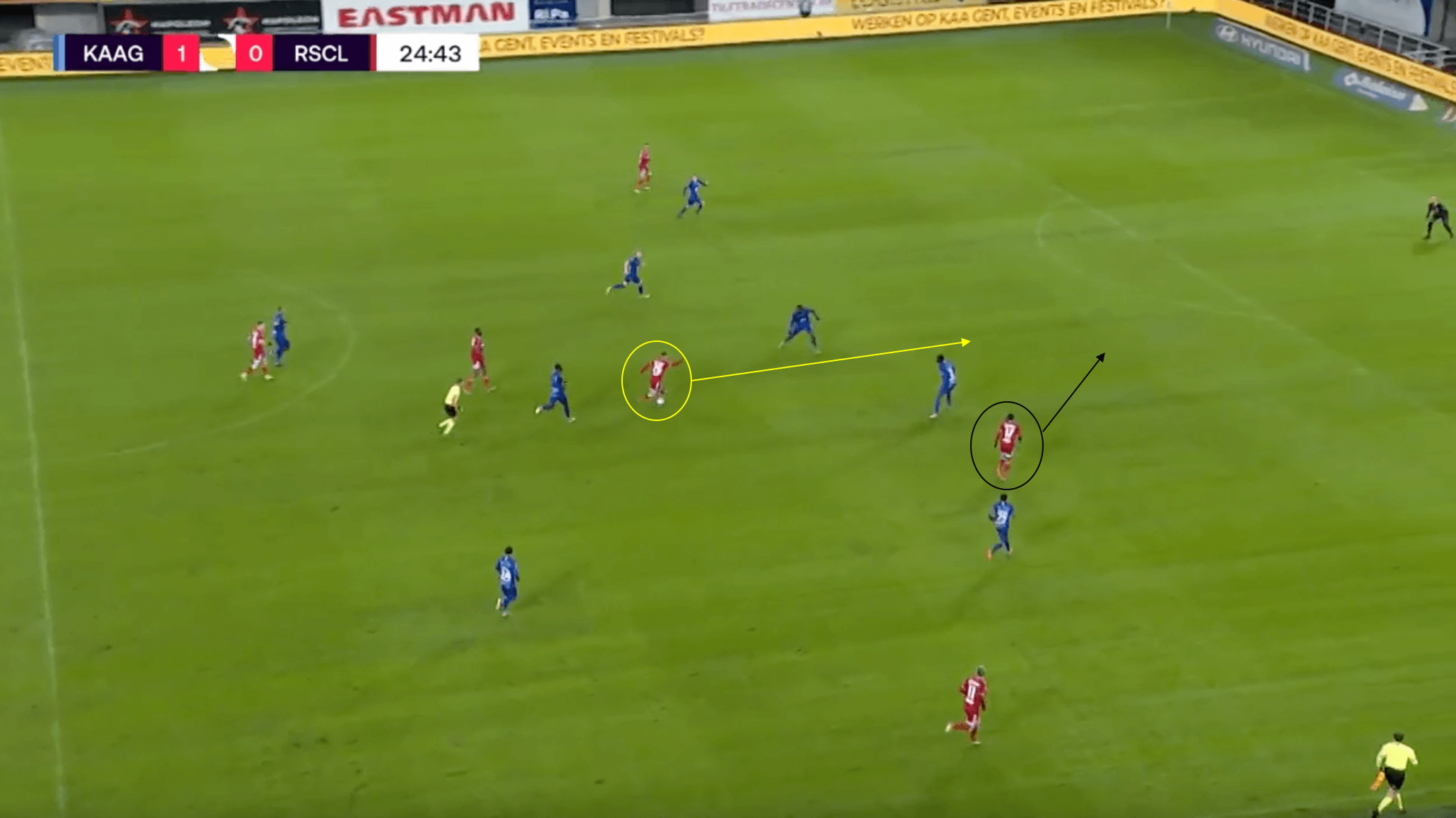 Though normally much more of a deep-lying playmaker, Raskin also enjoys moving into the attacking third at times to contribute, almost like a #8. Through balls are another pass type that Raskin normally executes really well, and the phase of play above shows this. Raskin is in possession and driving towards the 18-yard box. He notices the space opening up in behind and plays a perfectly weighted through ball to his teammate who perfectly times his run. This should have resulted in a goal, unfortunately, the goalkeeper was able to get off his line and block the shot. Raskin has a very good eye for a pass, as these first two examples have shown. 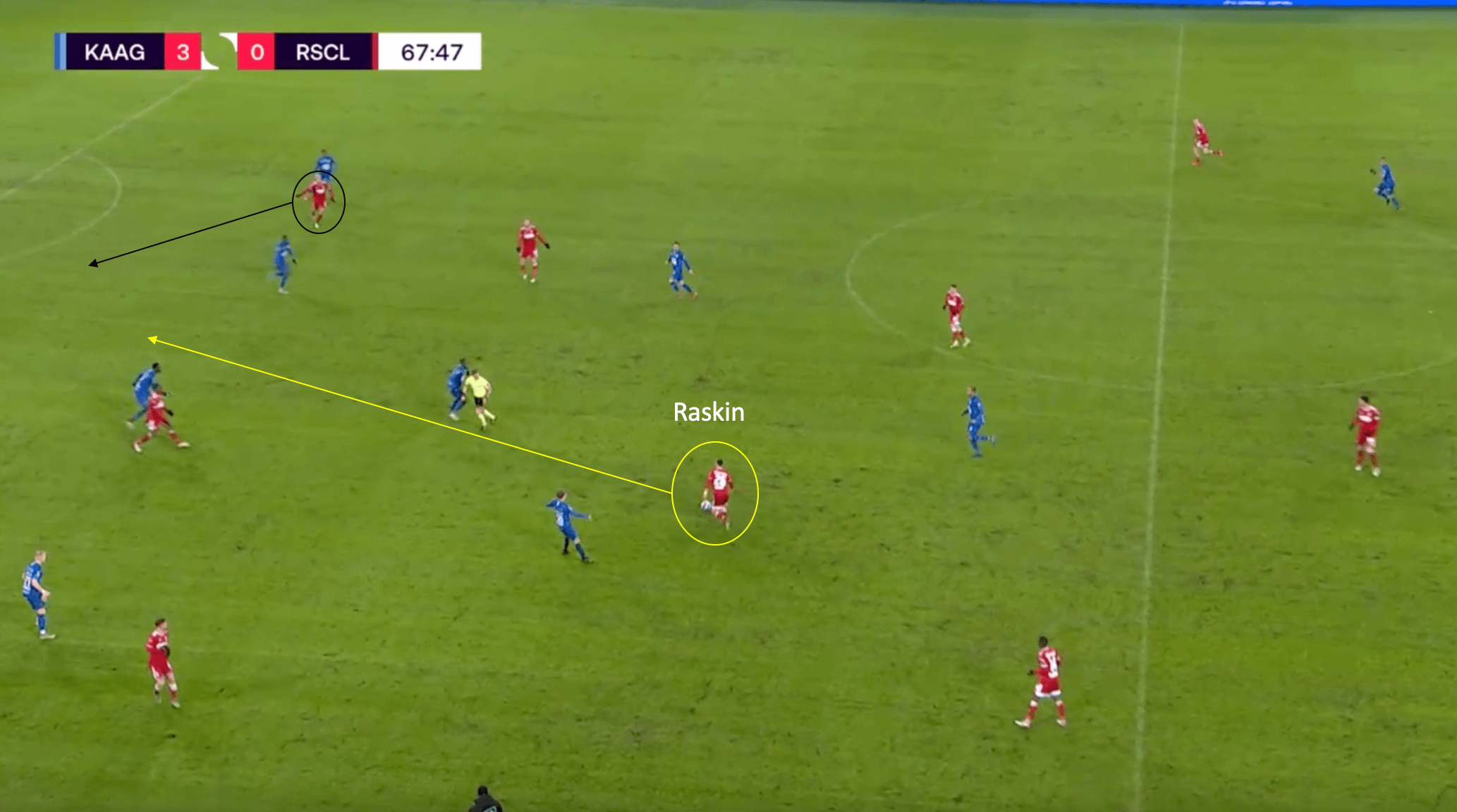 Once again, Nicolas Raskin is able to find himself on the ball in a more advanced position in midfield. He notices the forward calling for a ball to be played in behind; and plays an absolutely perfectly weighted through ball to break both the opposition’s midfield and defensive lines and play his teammate through on goal. This time a goal does result, as the forward is able to round the keeper and pass the ball into an empty net. Though only a consolation for Standard at this stage of proceedings, it illustrates Raskin’s ability to still do all he can to help his team in moments. 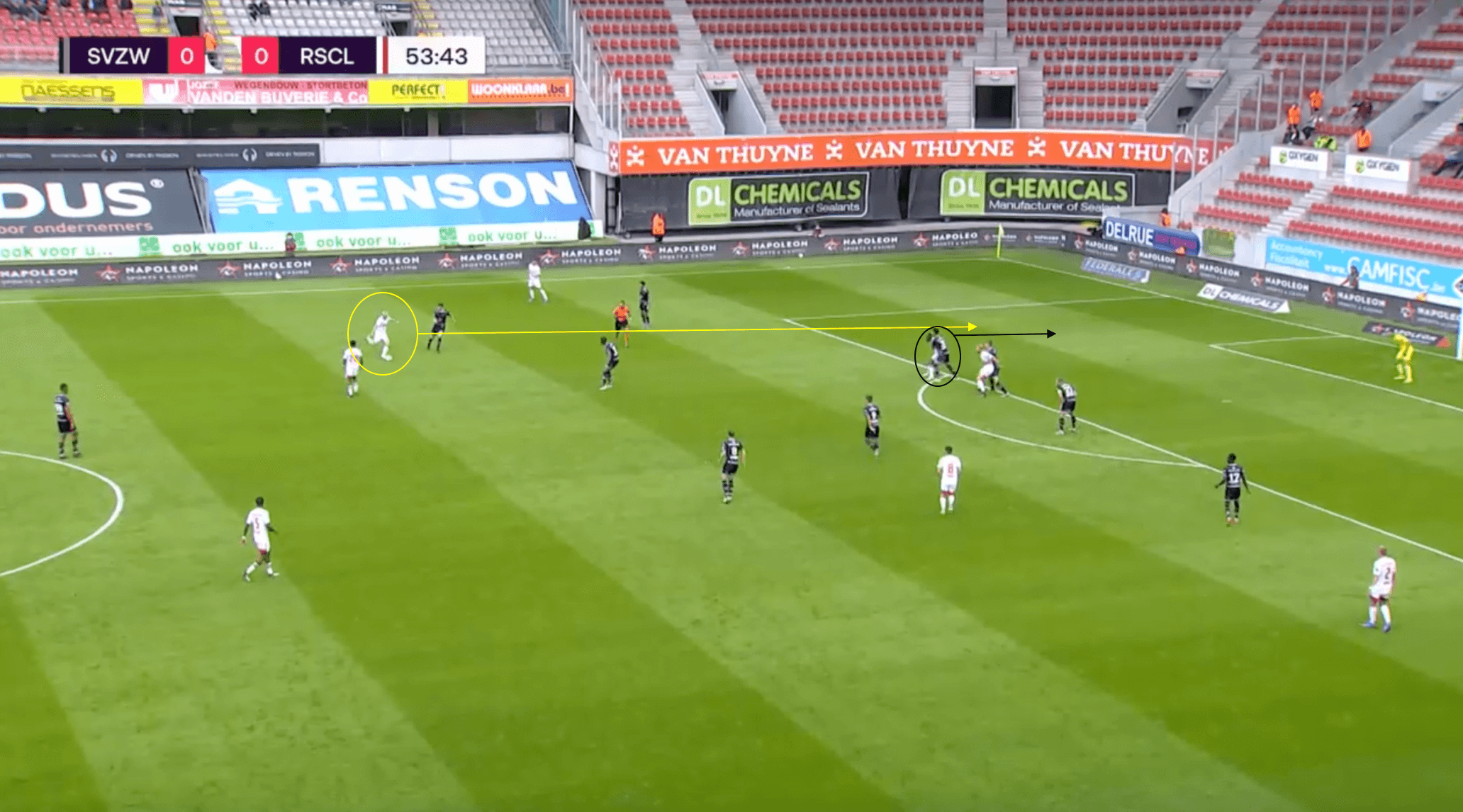 To sum up Raskin’s very good passing ability and range, the image above is probably his best one. Raskin receives the ball on the edge of the far touchline and proceeds to drive inside. He begins to get closed down by the opposition defender and proceeds to look up and play a perfectly weighted pass to break the opposition’s lines and into the path of his forward. Unfortunately, the play takes a poor touch, allowing the goalkeeper to come and collect.

It is easy to see why a manager like Marcelo Bielsa would love to have Raskin at the club. His inch-perfect passing fits perfectly with the style that Bielsa implements at Leeds United, but even with the being said, his passing ability is probably not the main reason that Bielsa wants him.

While his range of passing no doubt would have attracted the likes of Marcelo Bielsa’s attention; his ability to hold his own and excel in 1v1 defending situations is what really stands out. Under Bielsa’s tactics, Leeds like to play a very aggressive man marking system in all areas of the pitch, meaning that everyone has their own marker and defends 1v1. This is something that Raskin excels at, and what could be considered his strongest attribute. 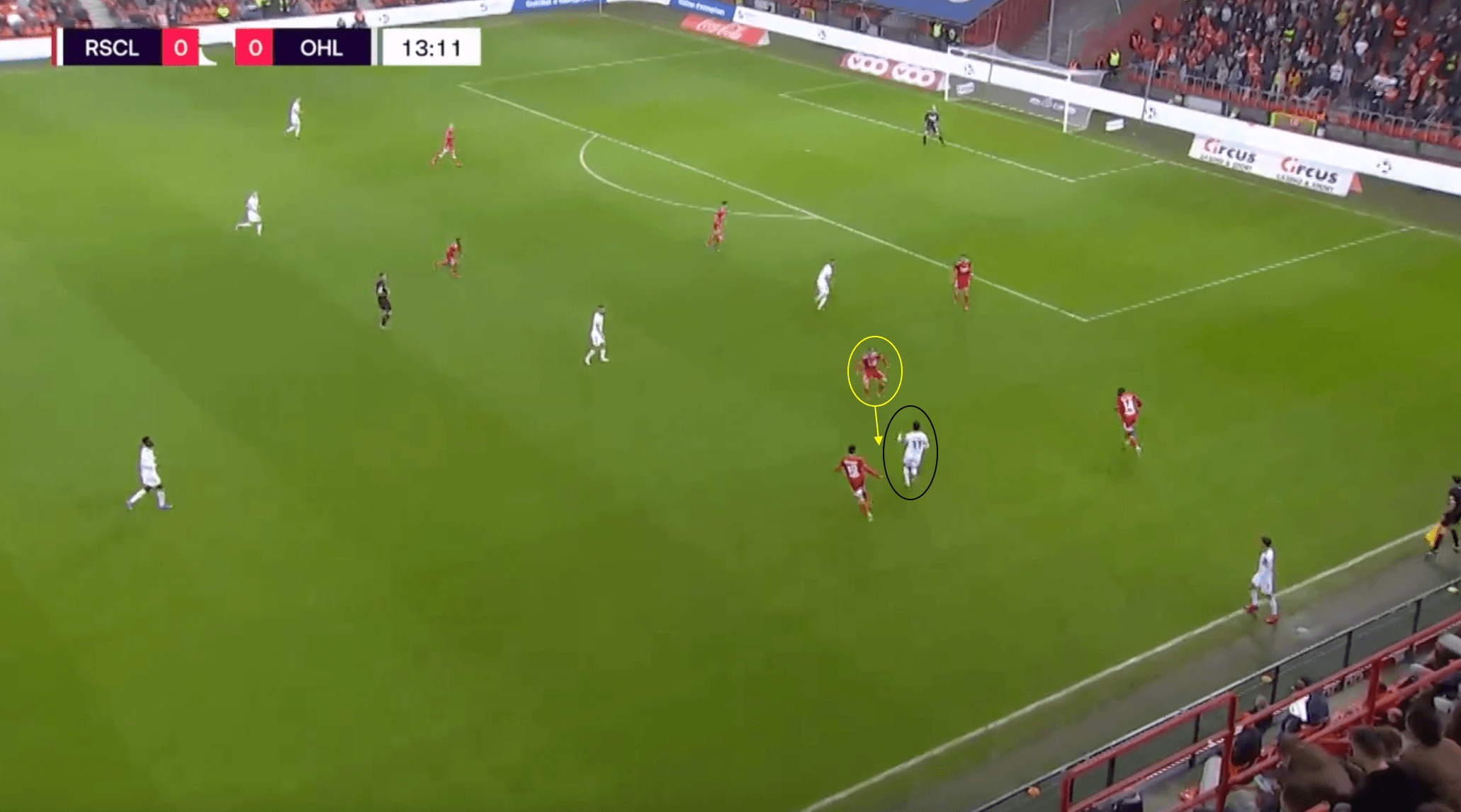 The phase of play above shows a perfect example of this 1v1 defending. The Leuven ball carrier is driving towards the 18-yard box after getting past the first Standard defender. Raskin is able to shape his body so that he can defend whichever side the attacker decides to go. As the ball carrier approaches, Raskin is able to step in and win the ball back without fouling, and subsequently is able to launch Standard on a counter-attack. 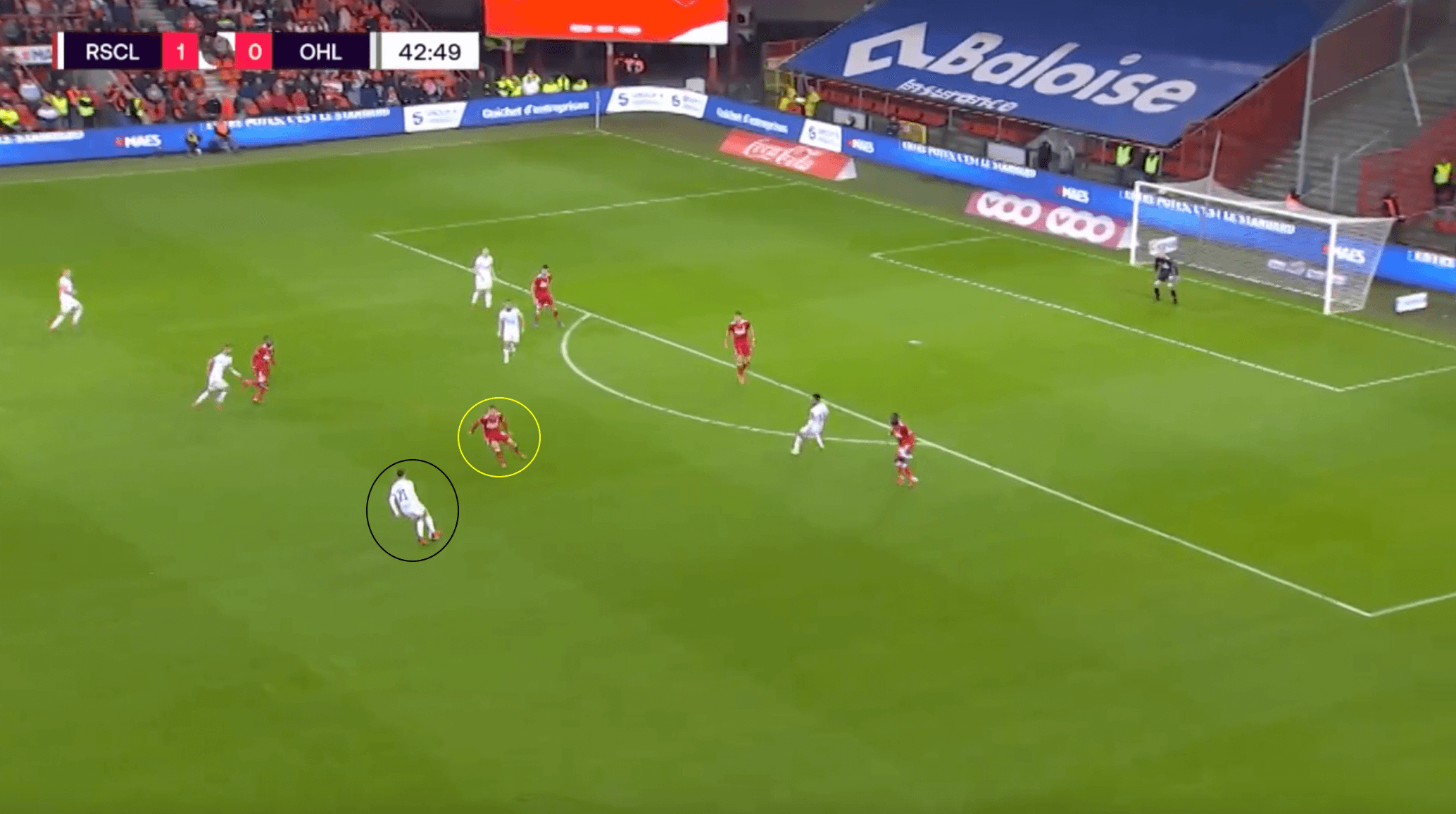 Again, Raskin is caught in a position where he is defending 1v1 against the player in possession. The ball carrier attempts to dribble past him, but Raskin makes himself bigger, and once again is able to step in and win the ball back without fouling his man. 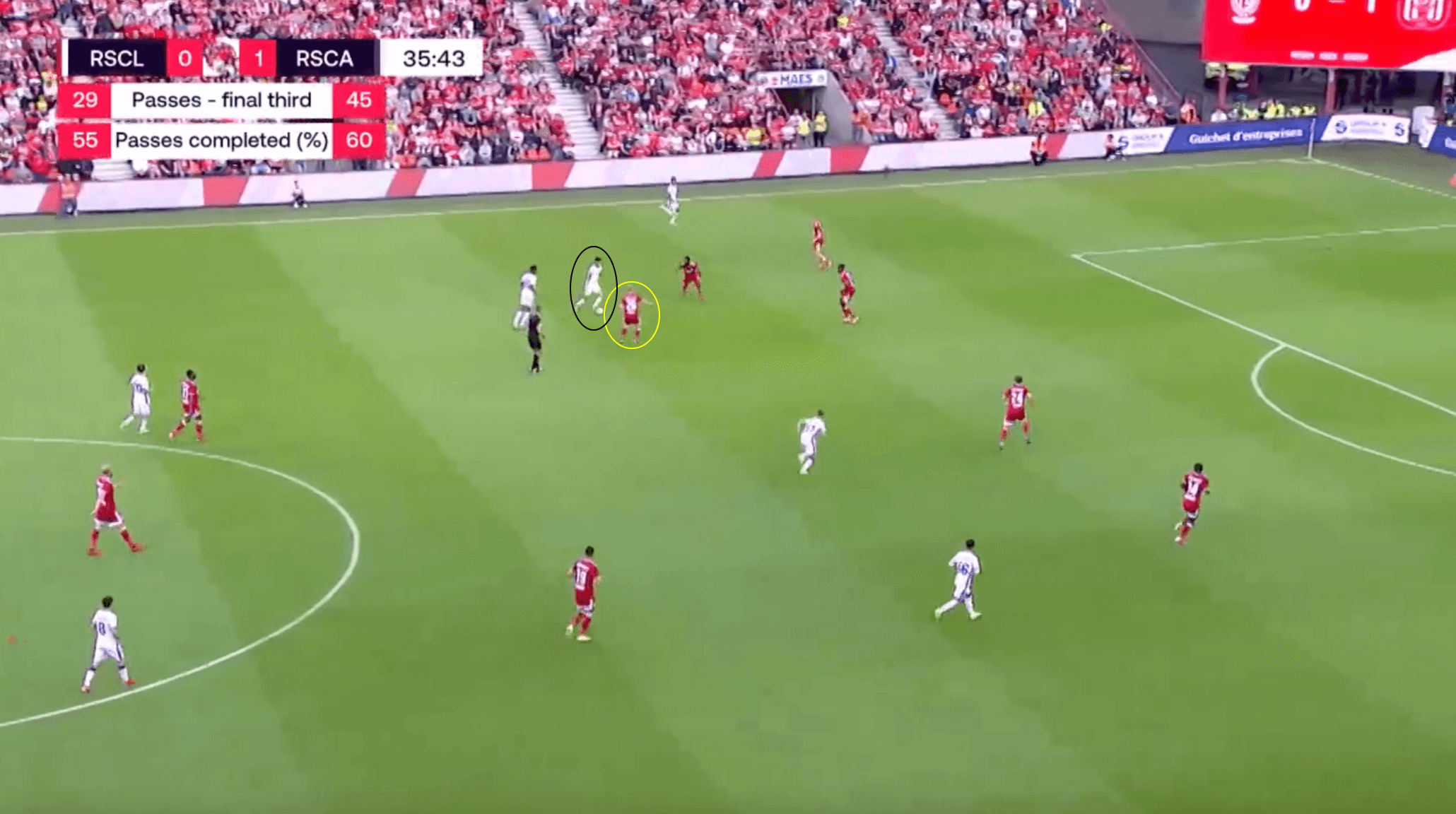 Another instance of this 1v1 defending is shown above. However, this time he is not face-to-face with the ball carrier. Instead, both him and his teammate are opposite sides of the player in possession. Raskin’s teammate decides to drop off and not engage the ball carrier, meaning either Raskin does it or he is able to drive through the midfield line and get at the defensive line. Raskin is able to put a perfect foot in and win the ball back, once again not fouling the man.

For only being 20 years old, Raskin’s innate ability to win the ball back in 1v1 situations without fouling his man is normally something linked to more experienced players in his position. Players that come to mind are names like Rodri at Manchester City and Joshua Kimmich at Bayern Munich. Both players who are very successful at international and club level, something that Raskin will hope to achieve in the near future.

As a deep-lying playmaker, usually Raskin will stick to his position in the heart of midfield and dictate player form there. However, he also will drive forward, and he makes smart off the ball movements when he needs to. This allows him to get in more advanced positions to dictate the play, especially if it is a match where Standard are on top. 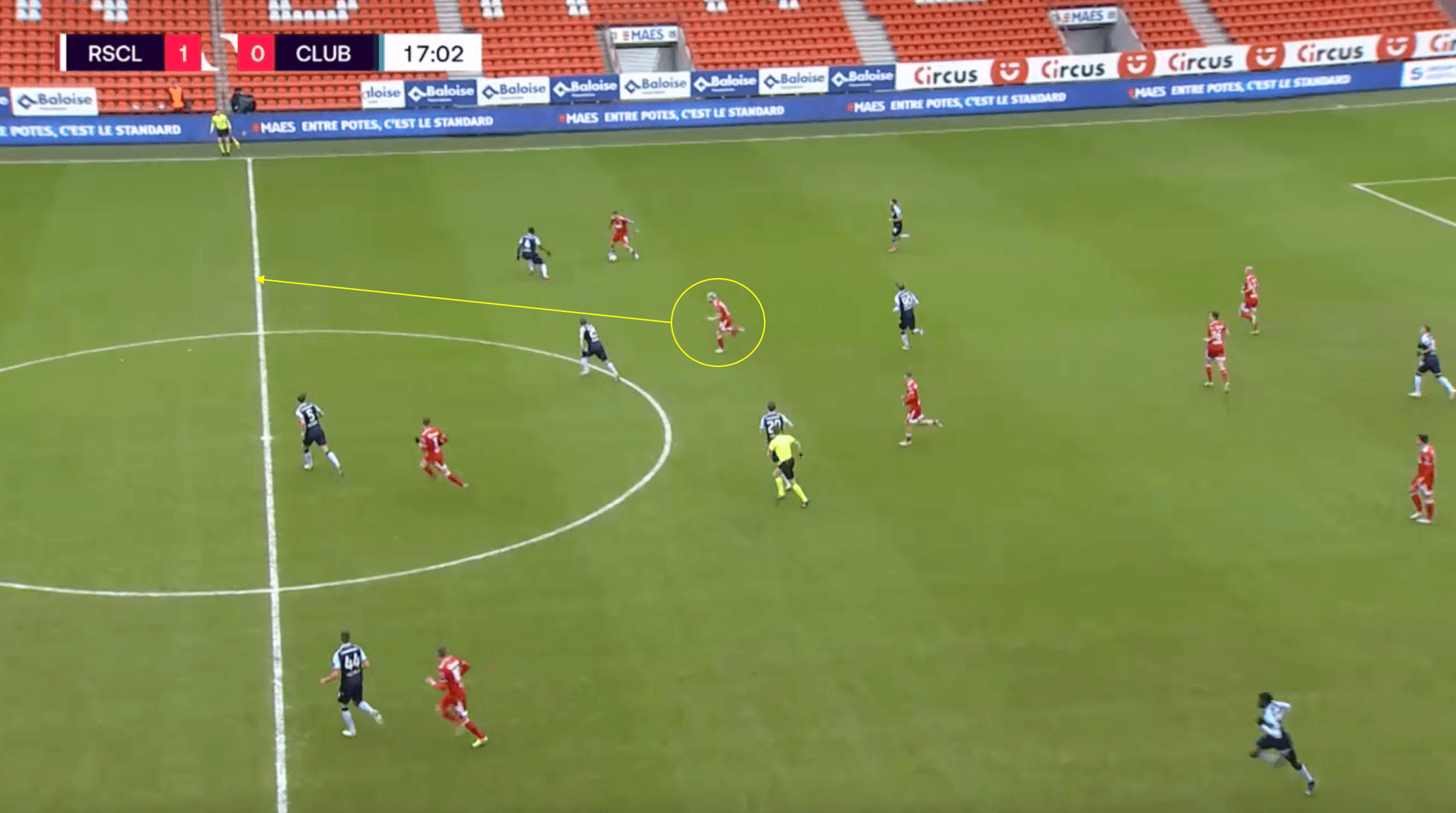 The phase of play above shows a perfect example of Raskin’s intelligent off the ball movements. Raskin plays the ball to his teammate, and then makes an intelligent run into the space left behind for his teammate to play it into. Unfortunately, the Standard player in possession does not play the one-two with Raskin, instead opting for a pass inside centrally. Still, this still demonstrates Raskin’s ability to see the space left in behind by the fullback closing down, and his ability to exploit it. 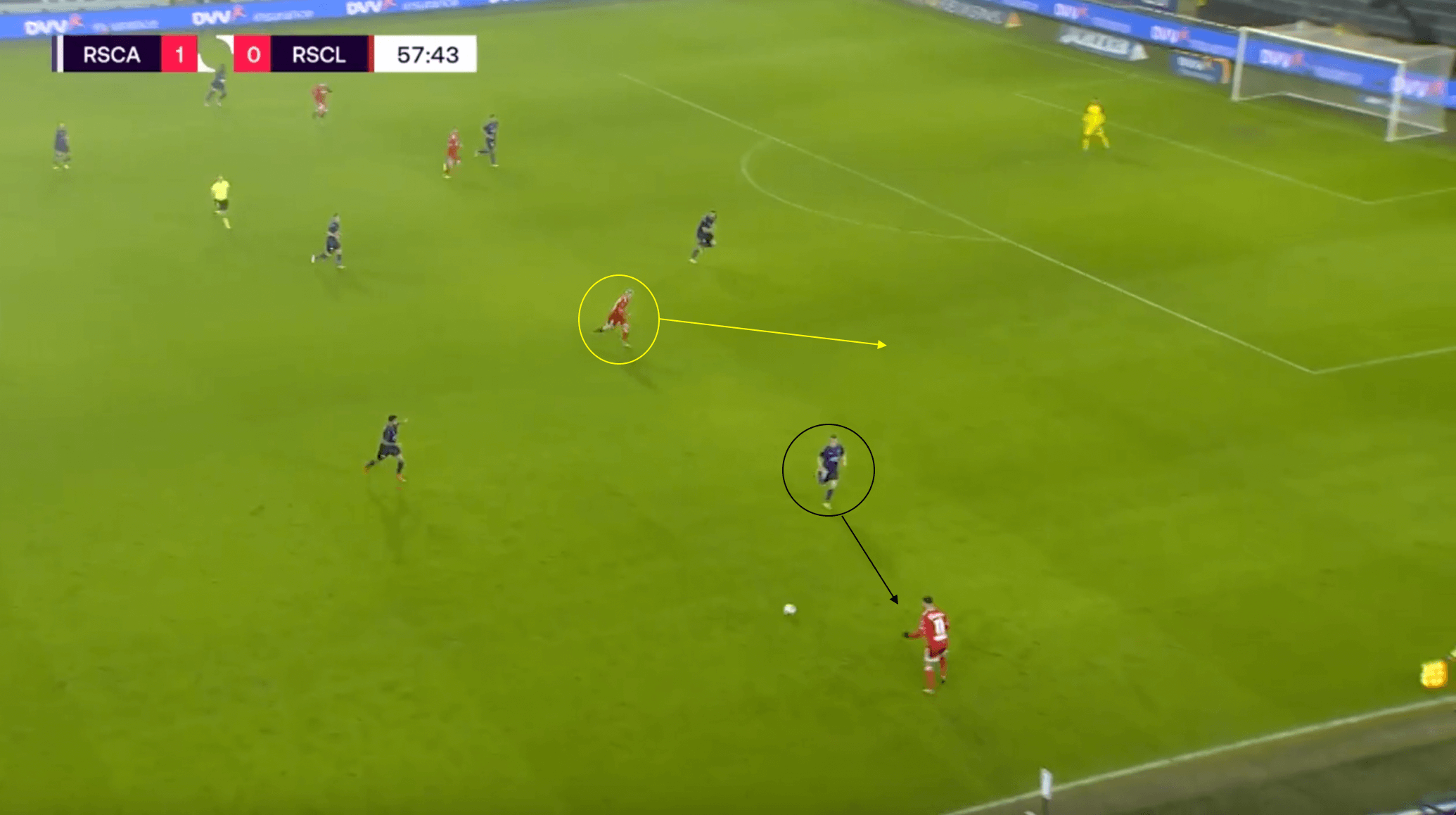 Once again, the image above shows another example of Raskin’s intelligent off the ball movements. The ball is played wide to the Standard player on the near touchline. As a result, Anderlecht’s left-back steps up to engage the player receiving the ball, which opens up space in behind him. Raskin is able to recognize this space and run into it, unfortunately, his teammate does not find him with a pass into that space. 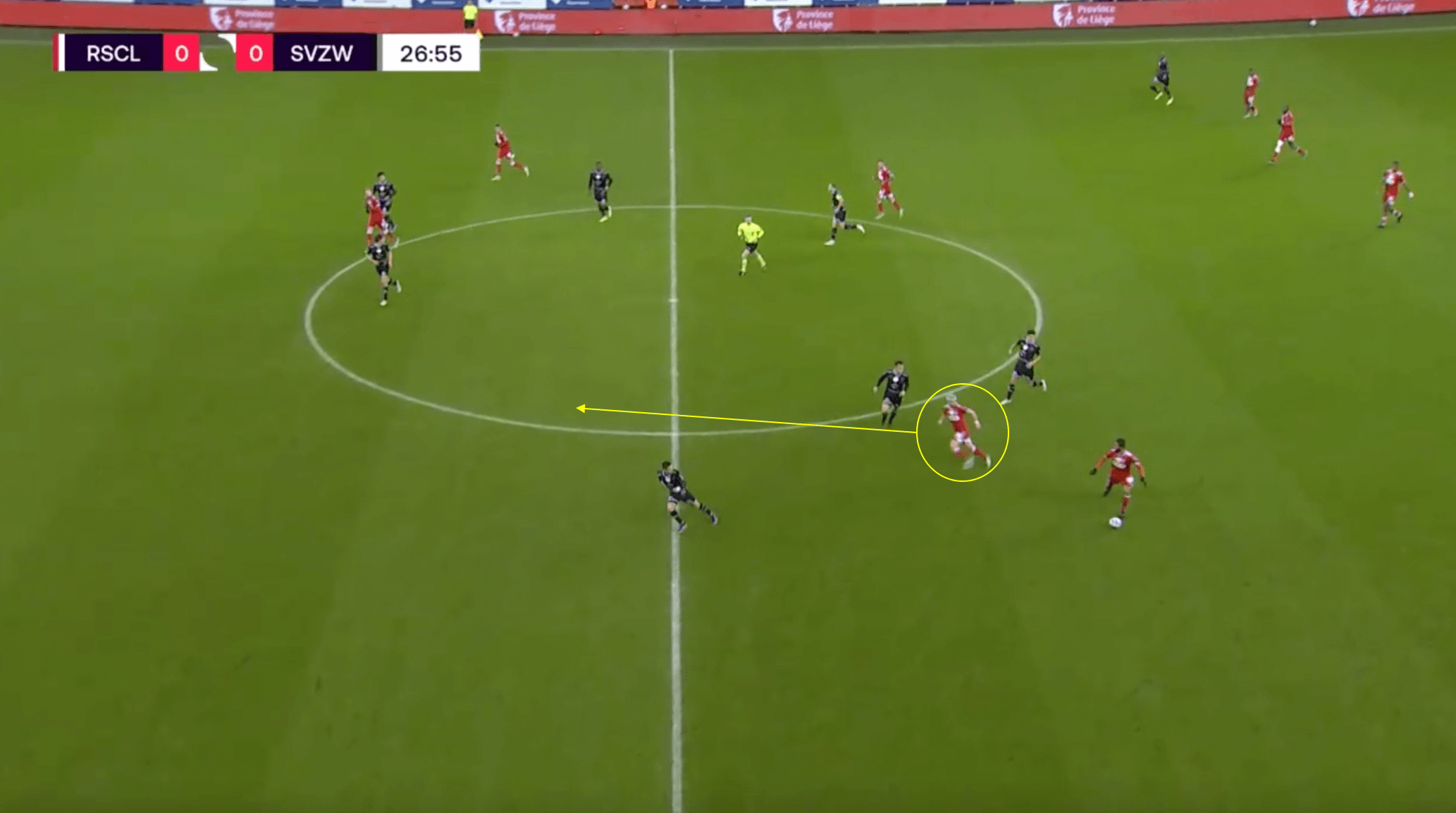 The image above again shows Raskin noticing the space behind the oppositions midfield line to be able to advance into the attacking third. The Standard player in possession of the ball has attracted the attention of both opposition midfielders, as they are both caught ball watching him. This allows Raskin to sneak through unmarked and find the pocket of space between the midfield and defensive lines. As a result, the ball is played to him, and he is able to dictate the play going forward for Standard from a more advanced midfield position.

As this analysis has shown, Nicolas Raskin has all the attributes to make it in a league such as the Premier League. Whether he actually moves to a club like Leeds United this winter is yet to be determined; but what is certain is that the club that pries Raskin away from Standard Liège will get a deep-lying playmaker that has all the potential to excel at the highest level for over the next decade.