Why were USA and Chile both left disappointed by their drab 1-1 draw?

Defending Copa America champions Chile faced off against USA in their last friendly before defending their title. The match ended in a 1-1 draw. The USA – led by recently appointed Gregg Berhalter, still unbeaten since he took charge – left the game with a sweeter feeling. They had a hard time defending deep against Chile’s intense and high-paced football, and were unable to deploy their attacking strength as much as they had against Ecuador.

Without Manchester United’s Alexis Sanchez, the visiting team deserved more. However, they struggled to create enough clear chances given their high possession (65%), a frequent criticism Reinaldo Rueda has faced since he took charge. This tactical analysis shows an unexciting game that left fans more worried than positive, but that still had a decent first half despite a less intense second one.

First half: Entertaining from both sides, until USA lost Pulisic

The home team started the game with a 4-2-3-1 that had Paul Arriola, Christian Pulisic and Corey Baird as the attacking line behind Gyasi Zardes. The first 15 minutes were frenetic, and the US inflicted a lot of damage to the defensive line of Chile, taking advantage of their speed, especially through the left wing. Meanwhile, Chile started with an unconventional 3-6-1. 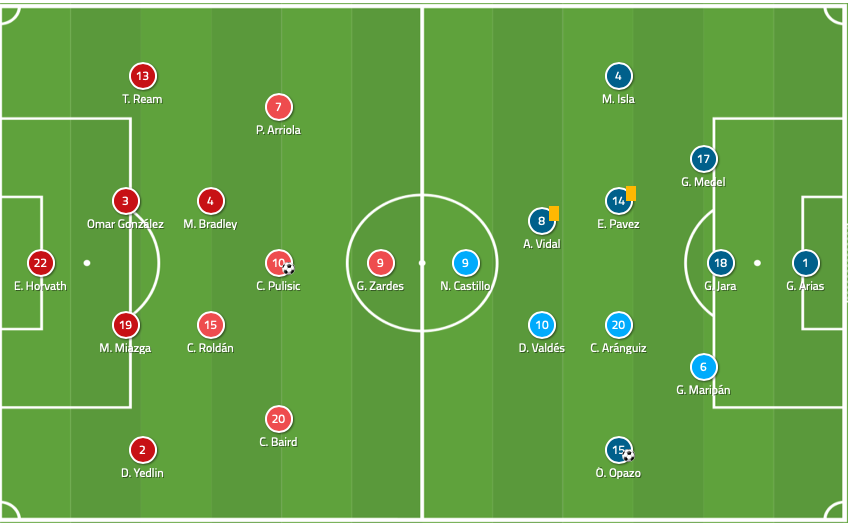 Reinaldo Rueda has been facing a lot of pressure from fans and media, as the team have not been able to replicate the performance they showed under Sampaoli and Pizzi, that led to winning two consecutive Copa Americas. This has forced Rueda to frequently change tactical structures and styles of play looking for better performances.

The tactical setup increased the attacking threat of Chile, especially out wide. Mauricio Isla and Oscar Opazo always hugged the touchline, giving width to their game and opening spaces through the middle for Arturo Vidal, Diego Valdes and Charles Aranguiz.

They used all three channels, both wings and the middle, as attacking weapons and the US had a hard time reading where the next attack would come from. Their goal is the perfect example, as seen in the image below. The play is created through the middle but is finished on the left wing, with both wingers coming in from out wide with spaces. 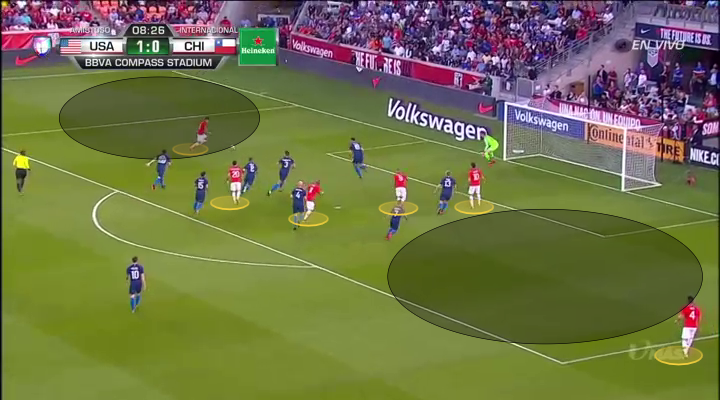 When the home team defended wider, Vidal and Aranguiz would move into the space between the centre-backs and Michael Bradley to receive and turn. This was a complicated situation for Bradley, with Chileans on each side and him not knowing who to press. 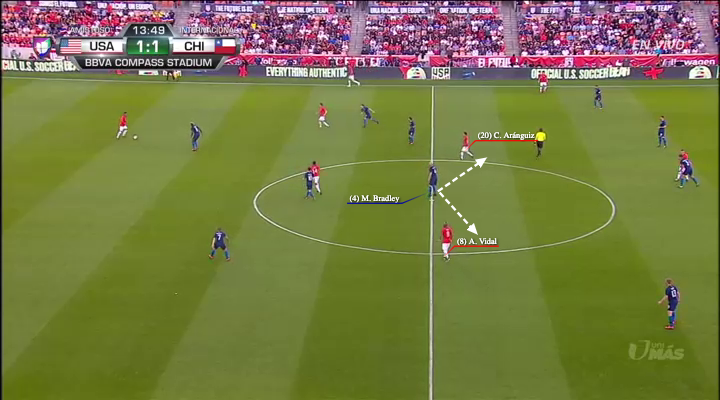 When the US centred their players, they would play long cross balls to Isla and Opazo, as seen in the image below. 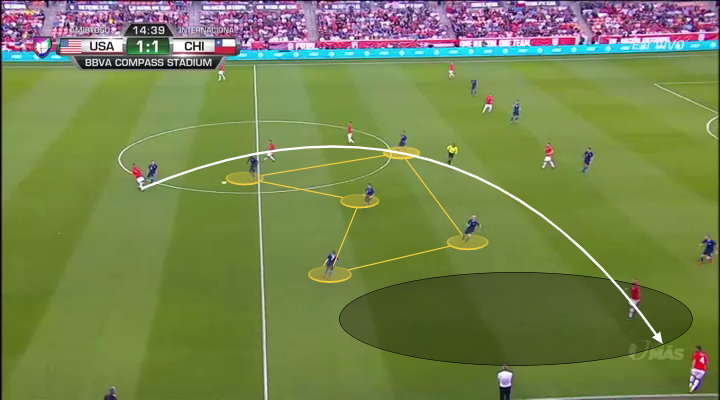 This tactical setup was also the main weakness of Chile, affecting their defensive strength, and where the US showed their biggest potential using their speed and pace in their attacking game. Having three defenders and wingers playing up and high, Chile left a lot of spaces on both wings and also in between their midfielders and defenders.

When playing from the back, the high pressure from Chile left plenty of spaces in the middle for the US to progress and counter-attack, as shown in the image below. These weaknesses were very well exploited by Chelsea’s Pulisic, Zardes and Baird in different ways. 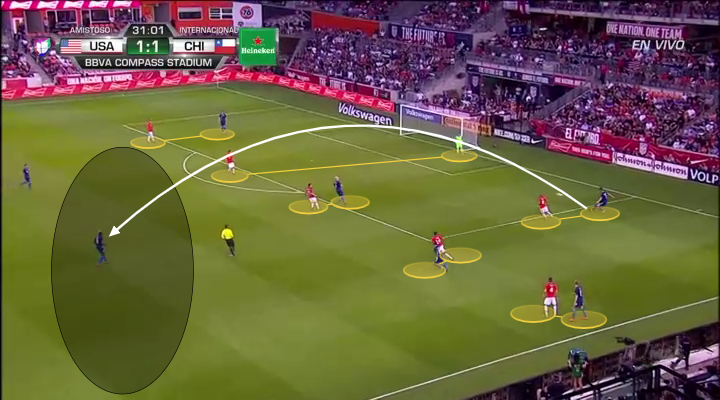 Pulisic occupied the left wing when counter-attacking as Arriola pulled Gary Medel wider, while his one-on-one abilities were unsolvable for the Besiktas player. The image below shows Arriola taking Medel wider as Pulisic runs into the space left by the Chilean. 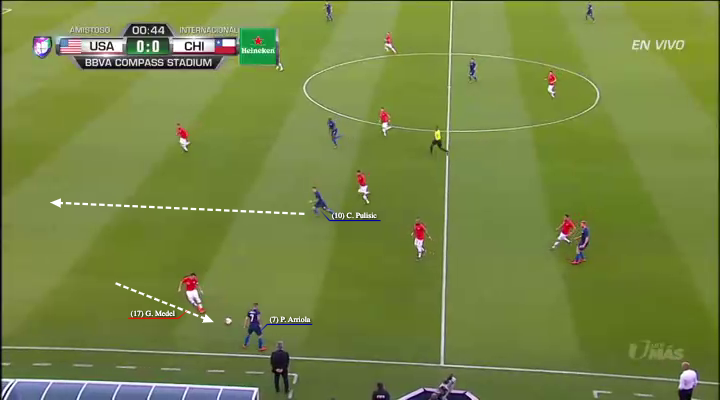 He also ran several times into spaces between Medel and Gonzalo Jara. The Chilean pair were not coordinated as to when to press high and reduce spaces with their midfielders, or when to move back to hold the high-paced attacks of the US.

The opening goal showed exactly how Medel stepped forward to press but Jara stayed back. Pulisic ran into the space and took advantage of his speed to defeat Arias, as the image below shows. 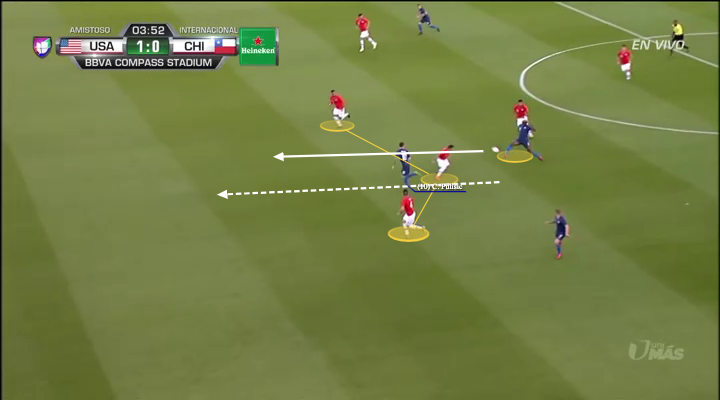 Zardes on the other side, although not very dangerous closer to the goal area, had very interesting movements, weakening the Chilean defence even more. When the US were not able to progress into the already ample spaces between Chile’s midfield and defence, he would move back closer to the middle of the field to receive the ball. That pulled Medel, Esteban Pavez or Jara with him and opened even more spaces for his teammates higher up the pitch. 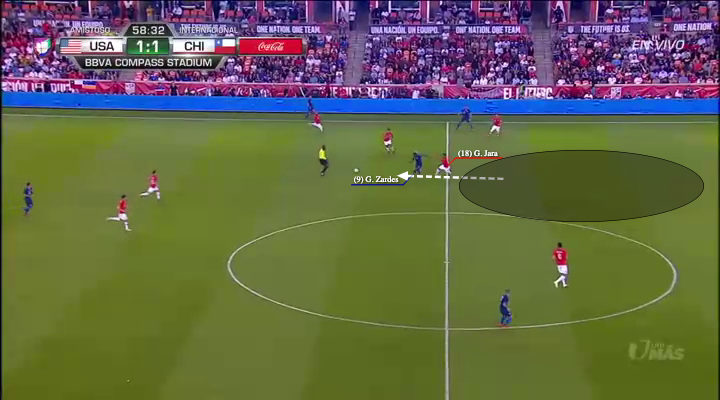 Finally, Baird had Guillermo Maripan defending on his side, who is not used to playing in a three-man defence. He had to cover large spaces without being fast enough, forcing him to commit repetitive fouls. Baird understood that he would win that race and he usually ran into the space behind Maripan, who was slow to turn and catch Baird, as seen below. 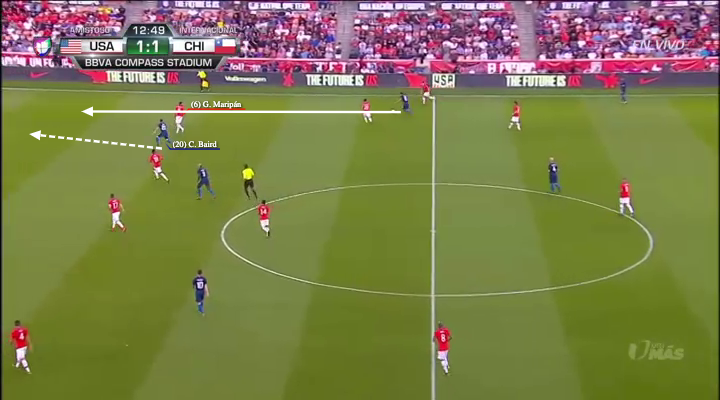 The first 20 minutes saw an even fight between these two tactical styles, but then it was Chile who took charge of the game and had the clearer chances to score the second goal. Pulisic’s injury further affected the US in attack, and they were unable to create as much danger as they had been at the beginning. Moreover, the US had only four shots during the game, three of them in the first half.

It is hard to do much further analysis of the second half as the game characteristics didn’t change, but the execution did. Chile had control of possession while the US tried to take advantage of their counter-attacks. None of them performed as they did in the first half and the game was much slower with less rhythm and without a lot of danger in each goal area.

Chile dominated the second half, but they changed to more short, direct passing rather than the long balls looking to break the home team lines through the wingers or Vidal that they had tried during the first half. This short passing game was slow, and Chile positioned very high. They were only able to progress closer to the final third of the pitch but no further. The image below shows all 10 of Chile’s outfield players in US territory, while the home team defended deep. 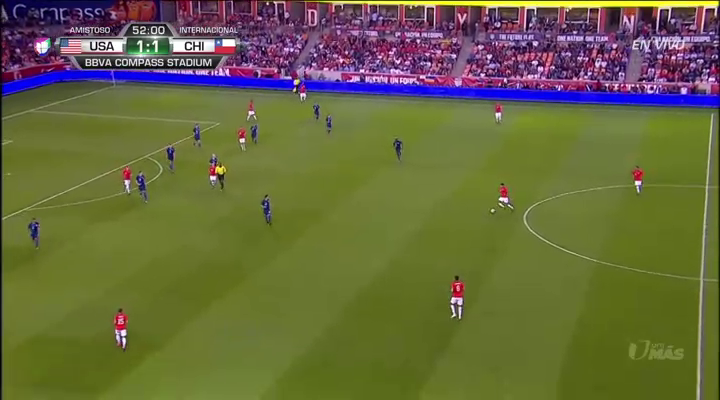 The US lost attacking precision and creativity and were unable to keep possession for a long time as they tried again to use speed to counter-attack. But with less physical strength and a lower density of players, it was much easier for Chile to control those attacks.

Both teams, under their own styles, failed to be creative enough to surprise their rivals. There were no individual surprises other than Alexis Sanchez and Pulisic, or collective surprises for that matter. There were no quick one-touch passes that could dismantle the opposition defensive structure, or movements that could result in attractive collective movements and clear goal chances. Of the 15 shots in the entire game, 10 were in the first half.

It is hard to draw clear conclusions of a game like this one. Usually, friendlies tend to be one-half games as second halves are usually full of substitutions and lower intensity. In this case, we saw a weaker second half, but because the level of both teams declined and were not able to keep the pace of the first one. Moreover, Chile only made their first substitution in the 70th minute.

The US keep their unbeaten run, and Berhalter can continue building his style as the team will start their CONCACAF League of Nations battle that starts in September. Chile are still full of doubts as they go to Brazil to defend their latest crown. CONCACAF again came out victorious in this friendly round against CONMEBOL.