Broken Barcelona: How PSG killed Messi and co with overloads and transitions

Year after year, Barcelona keep chasing the ghosts of their past. No matter how hard the La Liga giants try, in their minds, they’re still stuck back in Rome, reliving that agonising memory of a loss that shouldn’t have been. On Tuesday night, the Catalans were humbled in the Champions League once more, this time by Paris Saint-Germain again.

It was a game that resembled a true contest less and less as time went on and Mauricio Pochettino should be given credit for that. Ronald Koeman, on the other hand, made some questionable decisions and his pragmatism in the face of a worthy opponent has once again gotten the better of him.

This tactical analysis will dissect both teams’ tactics and tell you just how Paris Saint-Germain humiliated Barcelona at the Camp Nou.

Both teams have been struggling with some injuries and absences as of late. Koeman, however, had gotten some reinforcements in the form of the returning Sergiño Dest and Gerard Piqué, both of whom slotted directly into the gala XI. Still, their injury list is quite extensive as they couldn’t count on Philippe Coutinho, Ansu Fati, Sergi Roberto nor Ronald Araújo.

The rest of the squad, however, was mostly as expected. Barcelona were lined up in their traditional 4-3-3 formation. 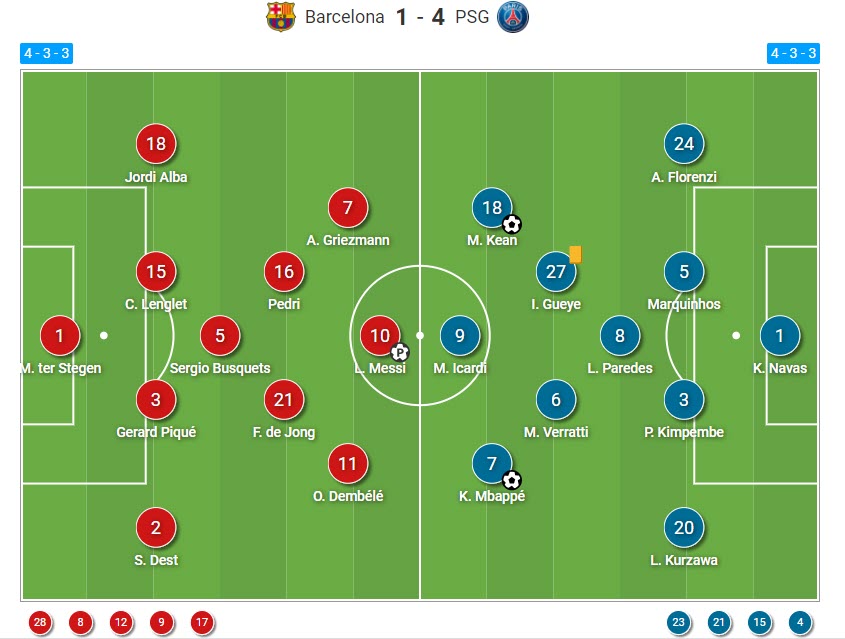 PSG, on the other hand, were without both Neymar Jr. and Ángel Di María, two huge pieces of Pochettino’s jigsaw. In their place, the Argentine coach opted for Moise Kean and Mauro Icardi as the former slotted to the right and the latter down the middle channels, pushing Kylian Mbappé to the left.

Marco Verratti also returned directly to the starting lineup and Pochettino decided to once more utilise him in that free no.10 role, just ahead of Idrissa Gueye and Leandro Paredes, even though on paper he was an interior on the left.

PSG lined up in a 4-3-3 formation as well but that changed throughout the clash.

Prior to the clash, the question on everyone’s mind was how would a slow and rather passive Barcelona defence handle the speed and verticality of Paris Saint-Germain’s attack? So it only stands to reason to start the tactical analysis by observing exactly that. In short, they couldn’t handle it and the result was the 1-4 scoreline.

However, the longer explanation is somewhat more complex, and yet, pretty simple at the same time. It only took one minute for the PSG speedsters to find gaps in Barcelona’s structure and give us a little preview of the whole clash. The home side opted to deploy a 4-5-1 structure out of possession which would then shift to a 4-4-2 or 4-3-3 respectively, depending on the opposition’s advances.

Lionel Messi was the lone striker the highest up the pitch and their wingers, Antoine Griezmann and Ousmane Dembélé, would drop deeper to form a five-man line with the three midfielders. However, Barcelona’s second line was very man-marking oriented and as soon as the players they were supposed to mark received the ball, they would jump out and mark them. 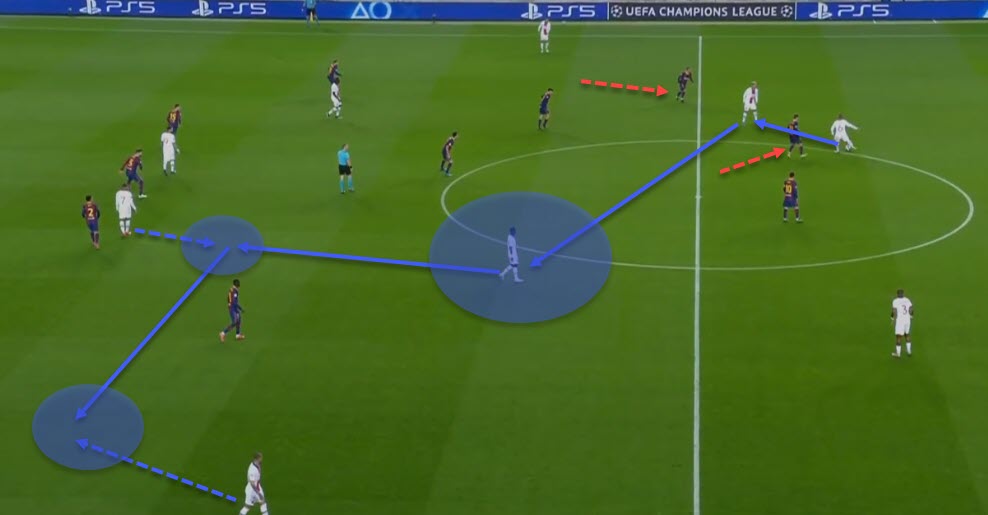 You can see an example of Barcelona’s defensive system in the image above as well as Paris Saint-Germain bypassing it by finding gaps in their structure. Paredes and Verratti both assume somewhat deeper positions which immediately activates the press of De Jong and Griezmann who push up respectively.

This quickly transforms Barcelona’s structure into a 4-3-3 but Dembélé finds himself in no man’s land and ball-watching instead of marking his man. Unfortunately for the hosts, this was a recurring problem throughout the game, especially the first half, and Paris Saint-Germain found a lot of success exploiting the pockets and creating overloads on that left side of the pitch.

In the image above, a simple sequence ejects Layvin Kurzawa into the final third and he can combine with Mbappé there. As soon as the left-back storms forward to join forces with the young prodigy, PSG can achieve a 2v1 overload on Dest, which, again, was a recurring issue for Barcelona. 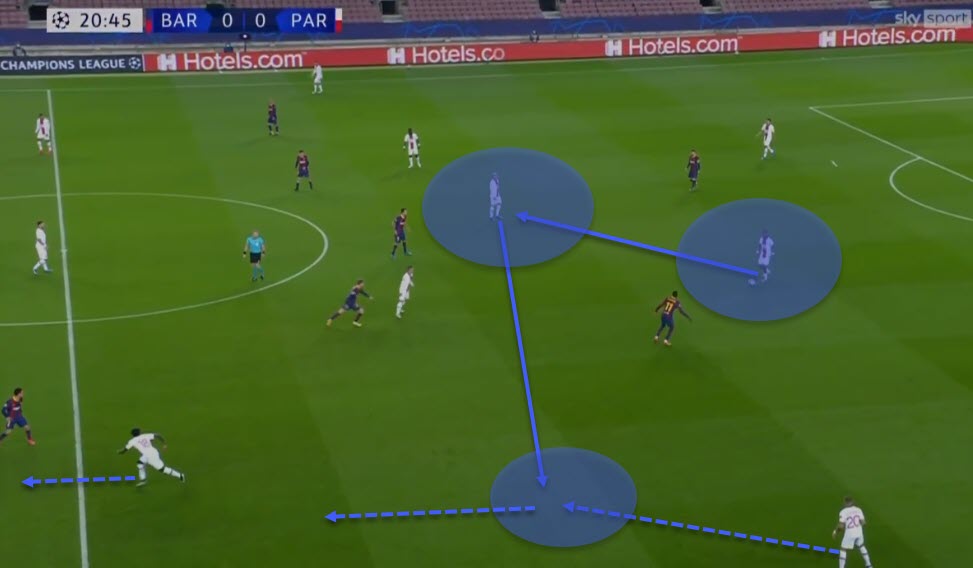 Let’s look at a different example here with yet another quick sequence that aims to release the wide players into space. The reason why Paris Saint-Germain’s centre-backs were so free to distribute the passes is because Barcelona lacked any aggressiveness in the first line of their defence.

Notice how in both of the examples Messi exerts little to no pressure and with a 2v1 numerical superiority, the Parisiens have free reign in the first phase of their build-up. The numerical inferiority does force Barcelona to push Dembélé higher into a 4-4-2 this time but again, a simple lay-off and space exploitation mean PSG easily advance into the final third and are on course to overload Dest once again.

Finally, let’s explore one more example of Paris Saint-Germain dropping an additional midfielder into the backline to force Barcelona’s second line to engage, leaving gaps behind them that can be exploited. 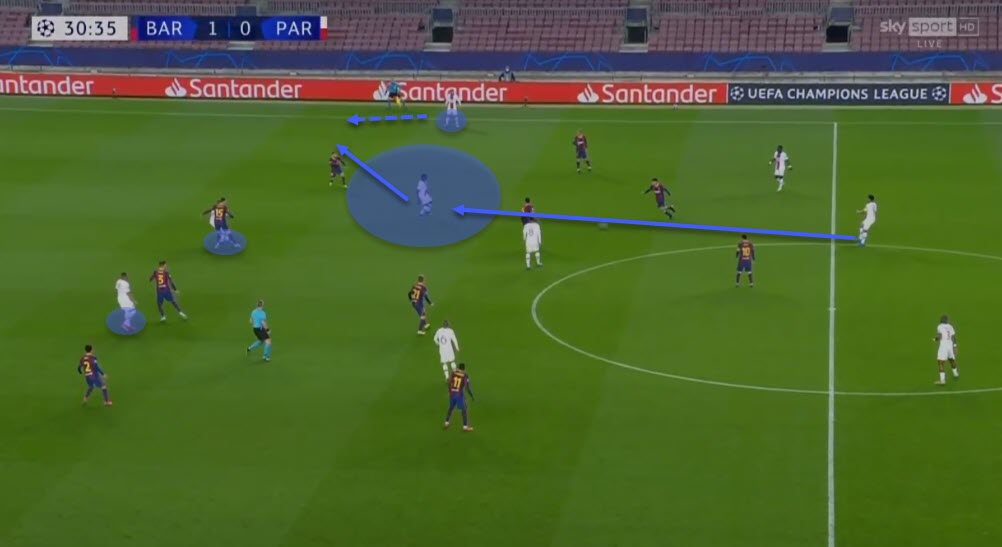 This time we’re on the right side of the pitch and following Gueye attracting Pedri’s attention and forcing the youngster out of the 4-5-1 structure, Kean can receive between the lines and easily overload Jordi Alba and release Alessandro Florenzi into the final third.

The key here is Kean’s narrow positioning, similarly to Mbappé’s on the other side. Notice how both wide players are deployed more centrally here, helping pin back the whole backline and keep them narrow so that the full-backs can fully exploit the wings.

Interestingly, this is exactly how Paris Saint-Germain scored both the equaliser and then another goal to open the floodgates and completely destroy Barcelona. Later in the second half, Koeman tried to fix the issue by instructing his wingers to drop deeper, sometimes pushing their structure into a 5-4-1, or even in certain moments when the wingers tracked their men, in a 6-3-1, which seemed to help at times but still couldn’t fully contain the excessive force of their opposition. 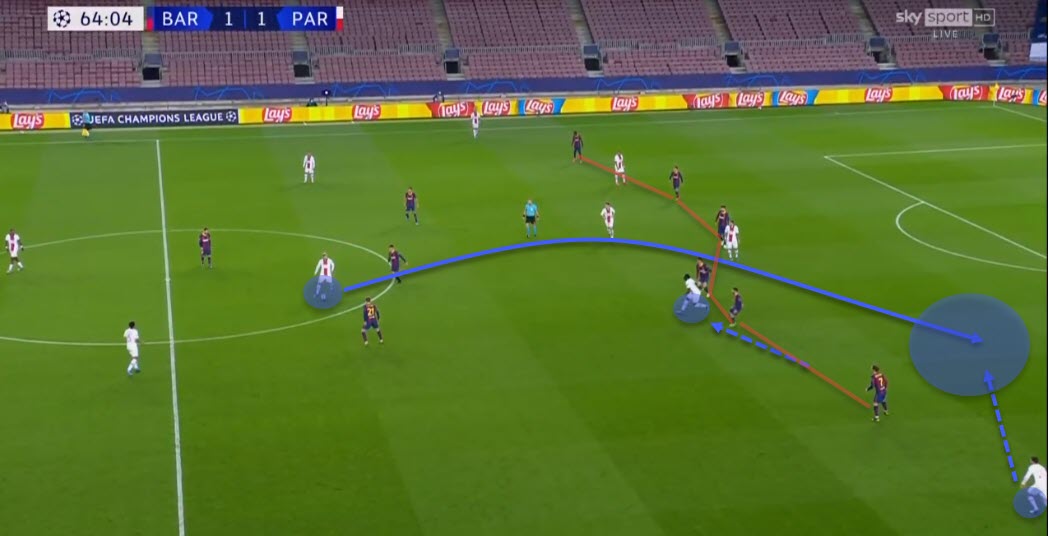 You can see that new structure above as well as PSG following the same approach to completely nullify it once again. Florenzi bursts behind Griezmann, who falls asleep, and proceeds to deploy the pass into the box that results in the goal for 1-2.

Note, however, that the 6-3-1 was only reactional/ occasional and not an actual defensive structure Barcelona maintained throughout the night.

Alongside their extreme efficiency in attack, led by the generational talent that is Mbappé, Paris Saint-Germain’s defensive tactics were also on point. Granted, Barcelona did have their own chances and the Parisiens are far from perfect in the defensive phase but Pochettino’s plan paid off.

This tactical analysis will now shift towards the Catalans’ attacking efforts and dissect why they ultimately failed. Let’s start by saying PSG decided to defend in a 4-5-1 mid-block, focusing on shutting down all and any passing channels down the central areas, pushing the hosts wide. 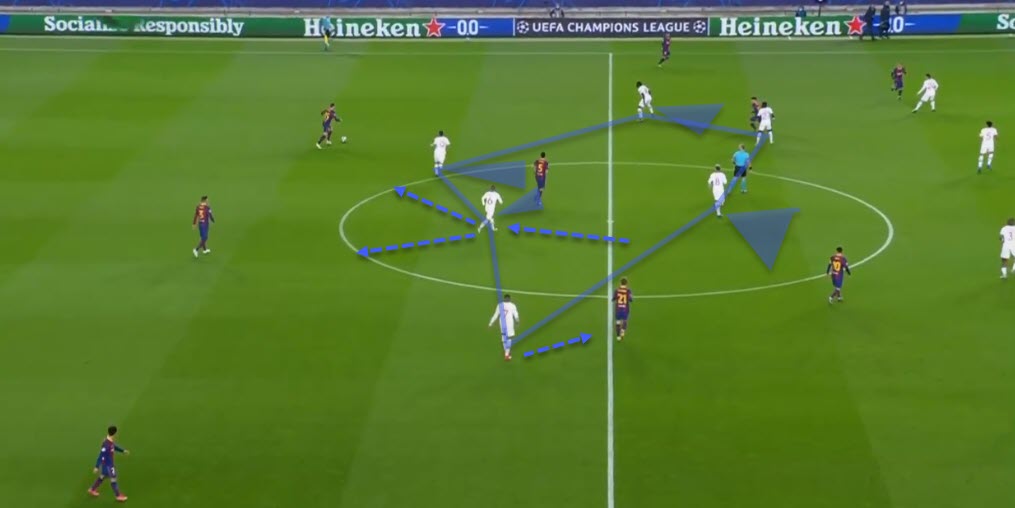 Notice in the above image how PSG form a box around Barcelona’s midfield, ensuring there is no easy way for the centre-backs to reach Sergio Busquets or the two eights in the half-spaces. Generally, there were a couple of variations to their press and you can see in the example how Verratti pushes up to contest Piqué who was just on the ball before passing it on.

This shifts PSG’s structure into a 4-4-2/ 4-3-3, depending on the height of the other forward(s). Still, apart from stopping Barcelona’s central progression and verticality, this compact and narrow block also served the purpose of cutting off Messi from the ball.

Often we would see as many as three or four defensive players forming a box around the Argentine and completely overloading his side of the pitch. This meant Messi had a hard time receiving possession in his signature false nine role and had to drop extremely deep, often beyond the second line, to get on the ball. 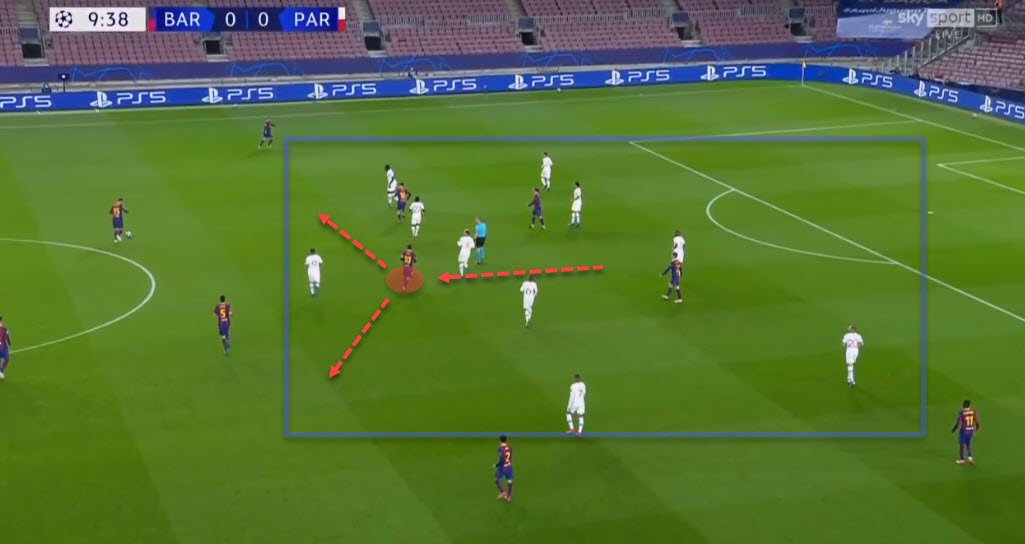 The above images serves the purpose of highlighting two things for us in this tactical analysis. Firstly, notice PSG’s compact and extremely narrow block, prioritising both horizontal and vertical compactness and leaving the flanks mostly free. The second thing is Messi’s positioning as the Argentine is slowly dropping deeper from his usual position and looks to receive the ball in the half-spaces beyond the second line.

While this is something he is known for doing in general, it meant he was still further away from goal and not finding himself in promising goal-scoring positions. What Barcelona still looked to achieve was find their key players like Pedri, Griezmann or De Jong in the half-spaces, especially if Messi was forced deeper.

You can see such an example down below. 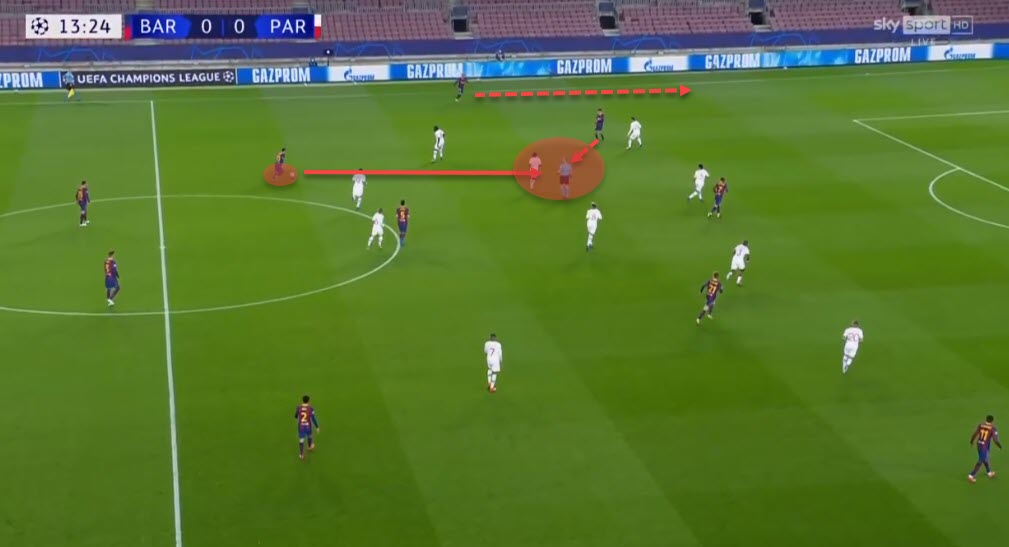 Messi is on the ball and Barcelona are looking to isolate and eject Alba into space behind the opposition’s line. Their best bet was to find someone in the half-space, preferably Pedri who can turn and advance with the ball extremely quickly, and then progress into the final third with pace.

This is exactly what happens above as Pedri only needs one or two touches to start advancing. Alba was crucial here as Barcelona didn’t have other outlets who offered similar off the ball movement. Here’s a very similar example once again but now it’s Griezmann receiving in the same area and with the same purpose.

Just as Paris Saint-Germain used Mbappé and Kean in those inverted roles to isolate their full-backs, Barcelona did the same with their Frenchman on the left. 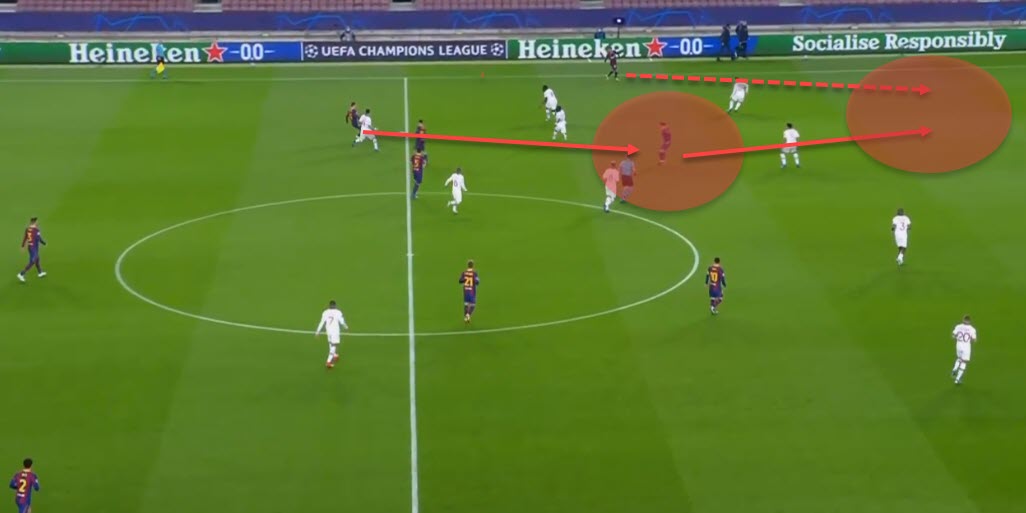 Another big aspect of their attacking tactics was the use of midfielders in higher areas of the pitch. Whenever Messi dropped deeper, Barcelona made sure at least one of the eights would take his place immediately.

Late runs from De Jong have become a prominent part of Koeman’s tactics and they seem to be working. After all, it was the former Ajax talent’s run which provoked a bad reaction from PSG’s backline and gifted Barcelona the penalty kick and ultimately, their only goal of the night.

But apart from an occasional good opportunity, the hosts were largely outplayed and destroyed in transitions as their backline couldn’t match the pace of the opposition’s forwards. PSG’s compact block disorganised their in-possession phase and made for unstable build-up attempts.

What started as a high-tempo game with both teams creating and missing chances aplenty ended up a one-sided affair for the Parisiens. Pochettino’s tactics outclassed Koeman’s and Paris Saint-Germain left Camp Nou as deserved winners.

With such a mountain to climb in the second leg at Parc des Princes, Barcelona’s chances are dwindling by the second. However, stranger things have happened between these two titans so we’ll just have to wait and see.