The end of the 2018/19 season saw Liverpool crowned champions of Europe for the sixth time. This has been covered extensively throughout the summer but it still bears repeating. As ever, however, the narrative surrounding the winners can be diluted by their success: Liverpool raised the trophy and after a stunning comeback in the semi-finals against Barcelona, there were few who would say that they did not deserve the trophy. With that being said, it is easy to overlook the performances over the course of the tournament. It is easy to forget that Liverpool were almost knocked out at the group stage of the competition, by none other than the team they just faced, Napoli.

Napoli came into this match after a somewhat erratic start to their Serie A season. A 4-3 win over Fiorentina in the opening matchday was followed by a 4-3 defeat to rivals Juventus. Their match before this tie saw them pick up their first clean sheet in a 2-0 win over a struggling Sampdoria side but their defensive concerns were real. This is despite the significant transfer outlay over the summer on the Greek international central defender Kostas Manolas, who would partner the excellent Kalidou Koulibaly. Napoli coach Carlo Ancelotti, therefore, had a lot to plan for before hosting this Liverpool attack with Sadio Mane, Mohamed Salah and in particular, Roberto Firmino all threatening to reach top form.

In this tactical analysis, we will look closely at how Napoli were able to come away from this match with a 2-0 victory. 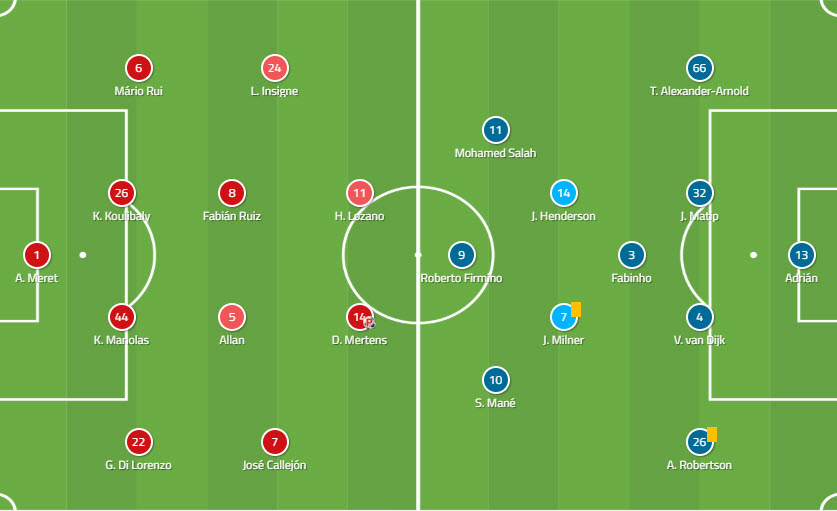 For Napoli, the initial team shape was somewhat misleading. Wyscout has them down as playing in a 4-4-2 with new signing Hirving Lozano partnering Dries Mertens in the attack. In truth, the structure shifted with Jose Callejon retaining a somewhat deeper position for most of the match while on the left Lorenzo Insigne had a free role with the ability to drift in and out of pockets of space. In the centre of the midfield, the Brazilian Allan was given greater defensive responsibility whilst Fabian Ruiz was very much the creative hub of the side. 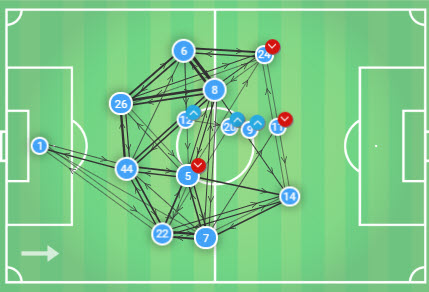 The Napoli pass map shows this slightly asymmetrical style with Insigne and even left-back Mario Rui playing higher, and on the opposite side, Callejon and Giovanni Di Lorenzo at right-back kept a deeper line. This may well have been a direct result of the threat of Sadio Mane from that side. On the opposite flank, Koulibaly patrolled the space expertly and was able to manage the dangerous Mohamed Salah 1 v 1.

Liverpool lined up as always in a 4-3-3 shape but as is normal from Jurgen Klopp the biggest talking point came in the selection of the midfield three. Fabinho played as the ‘6’ but Klopp opted for his safe midfield of James Milner and Jordan Henderson ahead of him. This would prove problematic as the game wore on. 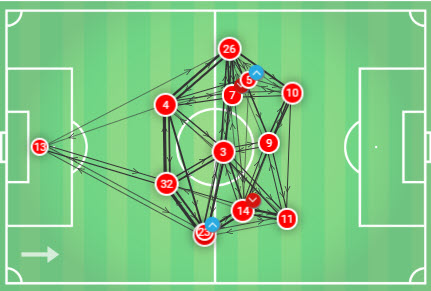 The Liverpool pass map showed no surprises other than the lack of width. It is normal for the two wide forwards to occupy central spaces as Roberto Firmino drops deep, as seen above, since there are normally mechanisms put in place to provide width elsewhere. Last season this was typically achieved by moving both full-backs high. This season we have seen the 8s and Jordan Henderson, in particular, moving outside to allow Salah to come in. In this match, we saw neither and this made it easier for Napoli to defend against the Liverpool front three.

As touched upon above there should be no surprises in the attacking structure used by Liverpool and Jurgen Klopp. The strength of this team, other than the coach, lies in the attacking three with Sadio Mane, Mohamed Salah and Roberto Firmino all making firm moves towards the world-class bracket in recent seasons. The mechanisms behind their success are relatively easy to fathom though.

Playing as the 9 Roberto Firmino is perhaps the least talked about but the most important player in making the attack function as expected. He drops off into deeper areas where he can receive the ball in space and link with the midfield. This dropping off effectively freezes the central defenders and forces them to make a decision: do they allow him to go and leave him space, or do they follow. That decision is then quickly taken away from them when the likes of Mane and Salah move inside, not just into the half-spaces, but often into the central zones to occupy space. When the structure works Liverpool create overloads and exploit space ruthlessly. In this match, it did not work.

The front three were often narrow but there was no support from deeper areas where players would normally run to occupy these highlighted wide spaces. This lack of support in the attacking transition meant that Napoli were able to concentrate the bulk of their defensive resources to crowding the centre and denying Liverpool the opportunity to create overloads or find pockets of space in which they could play.

The three central midfielders for Liverpool all stayed relatively flat and offered little to no help in the attacking phase. What is perhaps more surprising was that the full-backs failed to progress to a higher line in order to offer support to the attackers. We have seen phases of play so far this season from Liverpool that suggested that Klopp was looking to play a more controlled game with Trent Alexander-Arnold especially being asked to tuck inside alongside the central midfielders. This lack of support in wide areas did not feel like an attempt to exert their control, instead, it felt as though Klopp was concerned about the attacking potential of Napoli in transition and that he wanted to negate that threat.

In this example, we again see the same issue but this time it is further compounded by the fact that both Mane and Salah are occupying the same space. As Firmino turns in possession to face the Napoli goal he should at least have three options. He should be able to drive forward in possession or combine with Mane to the left and Salah to the right. With Salah drifting over and effectively crowding Mane, one of those options was taken away. Firmino played the only pass that he could but the other two forwards got in one another’s way and the opportunity was lost.

Liverpool passive out of possession

There are two things that you can normally rely on from this Liverpool side. Firstly, that they will be effective in the attacking transition, but we have already seen that they were not; and secondly that they would be tenacious in the defensive transition. Jurgen Klopp built his reputation as a top-level coach with Borussia Dortmund and became synonymous with gegenpressing or counter-pressing. His tenure at Liverpool has shown that there is far more to his game model than just hard running and pressing but there are still elements of this full-on philosophy when you watch this Liverpool side play.

Liverpool will often have a top-class to elite score for passes per defensive action (PPDA). This is a metric which measures how many passes a team will allow the opposition before they engage them in a defensive action. Liverpool are regularly in the single figures and often under 6 for the number of passes they allow their opponents. In this match, they allowed 10.78, their highest PPDA of the season.

Too often Napoli were able to comfortably play through the lines of attackers and midfielders with little effort made to effectively press the ball or close down passing lanes. We see this above with the line of three midfielders especially positioned far too flat. This allowed Koulibaly to find a driven vertical pass through the lines and into the feet of one of the forward players.

Even when Liverpool were more compact defensively they struggled to prevent Napoli from progressing the ball comfortably through the thirds. Here we see that Liverpool are compact centrally with little room for Napoli to occupy. Despite this, it is interesting to note that the two Napoli central midfielders are still well-positioned. With Lorenzo Insigne moving inside from the left though we see Trent Alexander-Arnold pinned and unable to move out. Jordan Henderson has recognised the threat of Mario Rui on the left but it is too late and the pass from Koulibaly allows the ball to move into the Liverpool half easily.

While the overriding narrative of this match will be that Liverpool were poor and not up to their expected standard, we still have to recognise that Napoli were excellent for large periods of this match. They set up in such a way and used the positioning of their forward players to negate the ability of Liverpool to retain or recycle possession comfortably. This led to the away side coming under pressure and turning over the ball too often.

Out of possession, Napoli were content to leave their front two high against the two central defenders of Liverpool. At the weekend in their match against Newcastle, we saw Liverpool continuously recycle the ball through the two central defenders to retain possession or control of the game. This would then lead to one of the two breaking forward to overload the midfield and allow the ball to be progressed. This option was taken away by Napoli and they pressed man to man in their own half and forced Liverpool to rush their passes and turn over possession of the ball.

In periods of sustained possession, we saw Callejon, on the right, move to a high line to stretch the defence of Liverpool. Often we saw the four Liverpool defenders matched up man to man against four Napoli attackers. This allowed Napoli to create favourable matchups against the full-backs in particular as the home side probed and looked to create attacking opportunities.

This was a threat that could have been negated had Liverpool dropped Fabinho deeper to create a free man, but then Napoli would have been man-on-man in the midfield. In this situation, Fabian Ruiz and Allan would have enjoyed a qualitative advantage over Henderson and Milner.

It is far too easy in football to draw conclusions on a team, a coach or a player based on small sample size and we have to remember this is just one match. We also have to remember that this Liverpool side have a 100% record in the Premier League. Still, Liverpool fans would have liked to have seen signs that their side had learnt from the mistakes of last season.

The trip to Napoli was easily the most difficult of the group stage but there is now added pressure from Liverpool to perform in their next match in the competition against a tricky Red Bull Salzburg side.

Kudos to Napoli but questions for Liverpool.