As the MLS regular season winds down, many teams are fighting tooth and nail for a playoff position. As Philadelphia Union and LAFC faced off last weekend, this wasn’t the case. Both teams have had fantastic seasons, booking themselves a place in the postseason with plenty of games in hand.

While both teams have guaranteed postseason football, there is still lots to play for. Philadelphia are looking to climb back into first in the east, earning a goodbye to the conference semifinals, while LAFC still hasn’t mathematically earned the Supporter’s Shield. Bob Bradley’s team still have a shot at breaking the all-time points tally in an MLS regular season which was broken by New York Red Bulls last year. Find out what happened Saturday’s battle of giants in this tactical analysis.

Philadelphia Union made limited changes to their lineup after a convincing 3-1 win against Atlanta United at the end of August. You can find the analysis for this game here. With two weeks off, Jim Curtin’s men were ready to get back to business against the league leaders. With Marco Fabián dropped for missing a team meeting before the crucial match, Jamiro Monteiro pushed up into a more central position in the midfield, allowing Alhandro Bedoya to make a return to the team in the midfield. The team maintained their 4-2-3-1 formation for this game. 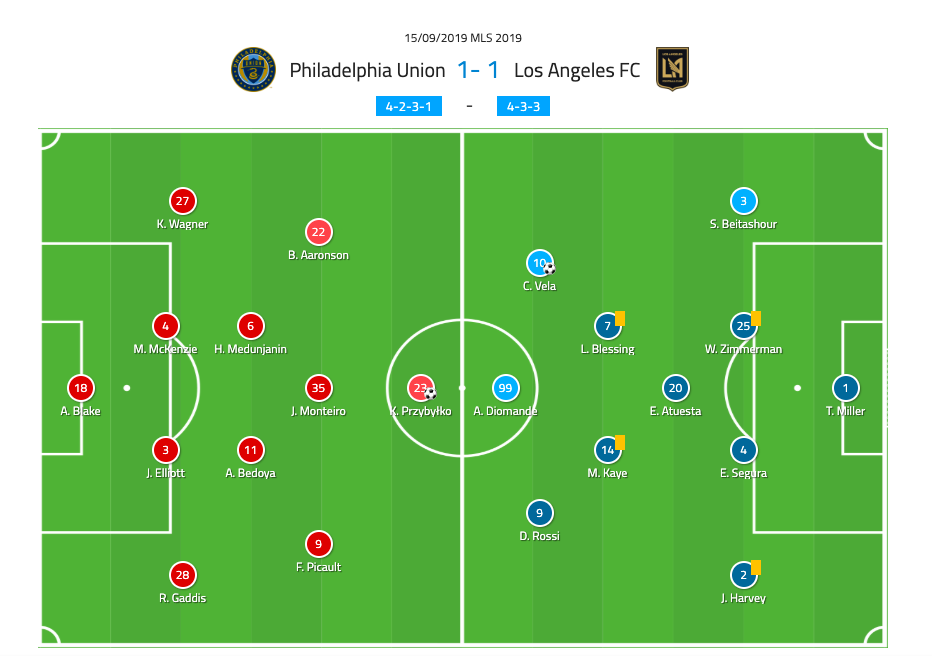 LAFC remained calm in their buildup, despite being caught out by Philadelphia Union’s press on a few occasions. While they looked dangerous progressing the ball forwards quickly on the transition, their ability to build out from the back remained a successful option.

During the first stage of LAFC’s buildup, Eduard Atuesta dropped between the lines to receive the ball from his defenders. He then had the option to link up with his full-backs, assuming they were still far enough back to do so, or make a penetrating pass through the lines.

Atuesta made 66 passes throughout the match, with 56 of them being successful. From the first image below, we can see his influence on all areas of the field. Nine of his 10 unsuccessful passes had targets in Philadelphia’s half of the field. The other was just inside LAFC’s half on the touchline. With around 85% of his passes being successful, we can see why LAFC trust him with the responsibility of progressing the ball.

In the image below we can see Atuesta drop into the free space to receive a pass from Jordan Harvey. Not only did him dropping deeper provide an option for his centre-backs, but it also allowed his full-backs to progress up the field.

On multiple occasions, Atuesta progressed the ball from one half to another with passes. Many times these passes went by Philadelphia Union players. While only 70% of his forward passes were successful, it is clear that Atuesta was willing to take risks during the buildup.

The image above shows Atuesta in a much deeper position after dropping to receive the ball. This image shows Mark-Anthony Kaye making a run from a deeper area into space. Atuesta is able to play a well-placed ball into the path of Kaye’s run. As mentioned above, Atuesta’s drop into a deeper area triggered his full-backs to make runs up the field. In the previous image, we can see Jordan Harvey, in red, advanced on the halfway line. We can also see the pass Kaye makes to Steven Beitashour, who is out of the picture and even more advanced than Harvey.

The pass map above showcasing Atuesta’s forward passes also shows his trend of passing to the wider areas. Whether the target was Carlos Vela and Diego Rossi, or Steven Beitashour and Jordan Harvey, it was clear that Atuesta was attempting to utilise LAFC’s width during the buildup.

With Beitashour and Harvey pushing up into the attack, Vela and Rossi were able to drift into a more central location to add pressure to Philadelphia Union’s defenders with striker Adam Diomande. The front three caused the Union problems with their interchanging positions and diagonal runs.

On occasion, Vela would venture out to wide areas where he could dribble at defenders, but it was in the middle of the field where he equalised for LAFC. The central positioning was only possible because of LAFC’s attacking width coming from other areas. In the following scenario, we see Mark-Anthony Kaye making a run into the box in the half-space.

This image also shows how Vela has shifted into a central area. He has positioned himself farther left than Diomande and Rossi has dropped off deeper, allowing him to play the dangerous ball into the run of Kaye. After Kaye’s shot hits the post, Vela gobbles up the rebound and equalises before half time.

It is also important to note that while Vela’s positioning was vital in his ability to tap in the rebound of Kaye’s shot, it had just as much impact on making the initial run possible. We can see from the images above that Kaye’s run is made into open space. This space was made available from Vela’s shift into the middle of the field. Steven Beitashour also held his run, leaving the space free from any LAFC or Philadelphia Union players.

The ability of LAFC’s attackers to seamlessly transition from position to position makes it extremely difficult for their opposition, in this case Philadelphia Union, from effectively marking each player.

Even on the transition, LAFC’s front three were able to quickly transition from wide areas to central areas, and vice versa. In the following scenario we can see Diego Rossi making a diagonal run towards the right side of the field while Diomande drops out to the left. Carlos Vela’s backward dribble pulled Philadelphia’s defenders out of position, leaving space in and behind them.

As the run is made, there is tons of open space between Philadelphia’s defenders. Vela is able to play a pass into the path of Rossi, but goalkeeper Andre Blake is quick off his line to cut it out. Diomande makes an ever so slight movement towards the back post, forcing Philadelphia’s defenders to think twice about whether to follow the man they were marking, or cover the man running into their space.

These runs caused Philadelphia’s defenders problems throughout the match, as they have done for almost all MLS opposition this season. As we can see from the still frame right before Kaye hit the post, this fluid shift in positioning also allowed midfielders like Kaye and Latif Blessing to join the attack.

The unpredictability of the LAFC forward’s positioning forces Philadelphia Union’s players to mark zonally. This, however, caused problems when LAFC’s attackers constantly made runs into different areas of the field. The two scenarios above showcase LAFC players leaving their positions to create space for teammates to run into. In many cases, these runs pulled Philadelphia players completely out of position.

As we have already briefly mentioned in this analysis, Bob Bradley’s 2019 LAFC are renowned for their high pressing defensive football. This is a tactic that, on many occasions, has been too tough for their opposition to overcome. Notably, LAFC were undone by LA Galaxy earlier in the season when their rivals beat the press by hitting Zlatan Ibrahimović with the direct ball to beat the press.

Similarly, Philadelphia’s goal came after they beat the press with a direct ball from Andre Blake deep into the corner. The quick transition allowed Philadelphia to dribble into the box and cross the ball into an unmarked Kacper Przybyłko who headed the ball home.

But while it is easy to suggest that Philadelphia Union simply thumped the ball into a deep area to beat the press, it is a much different tactic than that applied by Guillermo Barros Schelotto’s LA Galaxy. We can see how Philadelphia’s direct ball was different from that of LA Galaxy’s in the buildup to their opening goal.

Above we can see Mark McKenzie play a pass to centre-back partner jack Elliott. McKenzie has the option to play back to his goalkeeper, Andre Blake, right away. Instead he opts to play to his teammate who is going to attract the most pressure.

Elliott returns the ball to McKenzie, rather than deciding to utilise Blake. The pass to McKenzie forces LAFC’s pressing players to shift their runs towards McKenzie and further up the field.

Eventually, McKenzie passed the ball back to his goalkeeper, who was able to effectively hit his wide man. The pass was vital in bypassing six LAFC players.

Philadelphia Union allowed LAFC to press them, having the composure to possess the ball in their defensive third. Before Blake hit the wide-area with a direct ball, his centre-backs were being pressed by LAFC’s attackers. But instead of the centre-back hitting the ball long themselves, or playing the ball back to Blake directly, they exchanged the ball between themselves first.

This encouraged LAFC to continue the press, stretching them that much deeper than if they had hit the direct ball right away. We can see Philadelphia possessing the ball in a deep area later in the match again. This time they allow the press, showing patience and composure before breaking the lines with a pass.

After Haris Medunjanin played a ball back to his centre-back, McKenzie, Alejandro Bedoya meanwhile drops into the open space. The initial pass to McKenzie encourages pressure from the LAFC attackers. In the below image we see Bedoya play the ball back to Medunjanin. This, again, encourages LAFC’s attackers to make a forward movement toward the ball receiver.

But by pressing the ball, LAFC left themselves exposed to a quick counter-attack. The image below shows the incredible gap between LAFC’s defenders and midfielders. Medunjanin is able to play the ball to Kai Wagner who transitions up the field, eventually leading to a decent shot on LAFC’s net inside the 18-yard box for Philadelphia Union.

The courage to let LAFC’s dangerous press get as close as possible was critical to them being able to beat it. Had Philadelphia’s ball carriers made the forward pass too quickly, it would have meant LAFC had that much less distance to cover when tracking back. Encouraging the press helped spread LAFC’s defensive shape, creating pockets of space between the lines for Philadephia Union to occupy.

While both teams have already secured post-season football, there is still so much for Philadelphia Union and LAFC to play for. Whether it be a farewell to the conference semifinals or a chance at making history, every point is valuable at this stage of the competition. That’s why both teams will be frustrated not to pick up all three points in this meeting.

Next weekend both teams face off against opponents who, arguably, have more on the line. LAFC host Toronto FC while Philadelphia Union take a trip to New York to face the Red Bulls. Both Toronto and New York are fighting to stay in their playoff position and even push for a home draw in the first round.