Over the last few seasons, one of the most surprising narratives of the Champions League has been that Red Bull (RB) Salzburg have continually managed to fail to qualify for the group stage. Despite absolute domination on the domestic stage, incredibly intelligent recruitment and deep runs in the Europa League, they always seemed to stumble at the last stage. Last season, for example, saw them fall in the final qualifying round to a relatively weak Red Star Belgrade side. This season, however, saw a change in the coefficient standings for Austrian sides and RB Salzburg went straight into the group stage.

The draw for the group stage, however, was anything but kind with the Austrian champions, being drawn in the same group as Liverpool, Napoli and the Belgian champions Genk– one of the few sides in Europe who can compete with Salzburg for recruitment of young players.

With Marco Rose having moved on from the coaching role at Salzburg the first group stage match for Salzburg also marked the European debut for the American coach Jesse Marsch, making him the first American to coach in the group stages of the Champions League.

Genk promised a stiff challenge for the Austrian side having impressed on their way to the Belgian title last season. Despite losing key players in the summer, as they do every year, they had once again recruited well with the Romanian international Ianis Hagi, in particular, looking bright in the opening matches of the season.

In this tactical analysis, we will examine the match in detail and look at how RB Salzburg ran out 6-2 winners. 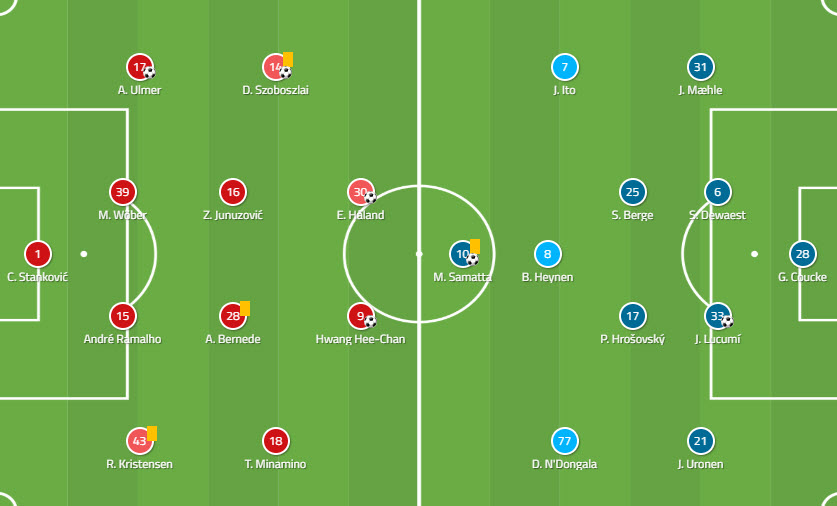 The biggest change from RB Salzburg in their transition from Marco Rose to Jesse Marsch has been the move away from the 4-diamond-2 system favoured by Rose to a variant of 4-4-2. In truth, in possession the system becomes more of a 4-2-2-2 with the two wide midfielders moving into more advanced central positions and linking with the front players.

The key players in the system are Andre Ramalho in defence and Hwang Hee-Chan and Erling Haland in the attack. The emergence and goalscoring ability of Haland has almost overshadowed the fact that this season has seen the emergence of the Hungarian midfielder Dominik Szoboszlai, a player that the RB Salzburg fans have been excited about for the last two years. 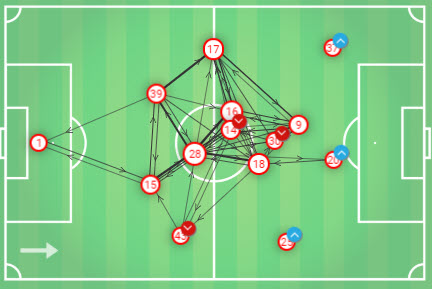 As we see from the RB Salzburg passmap the majority of the match was played in transition and in the Genk half. The 20-year-old French midfielder Antoine Bernede was the deepest midfielder and would look to create a line of three on the first line as his side were progressing the ball. On the left-hand side captain Andreas Ulmer was more advanced while on the other side Rasmus Kristensen retained a deeper line.

Genk played in a 4-4-1 system with Ianis Hagi starting on the bench. The line was led by the impressive Mbwana Samatta, with many surprised that the Norwegian international midfielder Sander Berge had not been the subject of a big-money transfer in the summer. 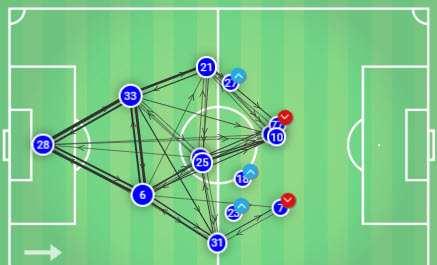 The pass map for Genk, on the other hand, showed that they struggled to progress the ball through the thirds. None of their passing connections were very strong but this was a direct result of the pressure applied to the ball by the Austrian side.

RB Salzburg progress the ball from the back

Jesse Marsch is known to prefer a game model that prioritises periods of transition. The American coach places great emphasis on playing vertically when in possession and putting maximum pressure on their opponents at every possibility. With that said there were still times at which his side were building out from the back, and in order to progress the ball securely in these areas we saw some definite patterns that require further study.

In order to allow the two full-backs to progress to a higher line, we saw one of the two central midfielders, Antoine Bernede, split out of the midfield to form a back three by dropping between the two central defenders. This line of three players allowed the ball to be moved across the width of the pitch. This movement across was designed to pull the immediate press from Genk out of position. By having three players on the first line as the ball moves across, there are more vertical passing options that are available in order to progress the ball forward.

We see this above when Max Wober receives the ball and has two options in which to play forward.

The same combination is in play here with the ball cycling through Ramalho to Bernabe, and then out to Wober in the centre. As the Austrian international gets the ball he has three options to which he can play and each allows his side to access different tactical options. The first would be to play to the closest midfielder in front of the opposition midfield. The second is out to Ulmer, on the left side, to play around the defensive block; and the third is through to the more advanced midfielder beyond the midfield.

The 4-2-2-2 under Marsch is developing into a system that is extremely hard to defend against with attacking options all over the field and a huge amount of vertical options for passes into advanced areas.

The midfield two would split, as mentioned above, with Bernede dropping deep and allowing the more creative Zlatko Junuzovic to move to a more advanced line where he can link with the more advanced midfielders. As we see in the image above, the two wide midfielders in the formation graphic have moved inside to a more advanced and central position. The two forward players are then on the highest line where they would look to put constant pressure on the opposition defence.

This 4-2-2-2 is very fluid with a lot of players looking to move and break lines as and when the opportunity presented itself. We see an example of this above as Ulmer plays a long vertical pass that breaks the lines of the opposition. Takumi Minamino makes a vertical run beyond the front players to get on the end of the pass. The Japanese attacker was a player who was identified early by Marsch as a player who had the versatility to become a key component of his squad.

This fluidity in the final third was key for RB Salzburg as they picked apart the Genk defence time and time again.

Over and over again we saw Salzburg overloading the Genk defence in moments of transition and creating opportunities to break into the penalty area. With the two forward players looking to break beyond the defensive line, and at least one of the two advanced midfielders joining them and running into space from behind them, the Genk defenders found them impossible to attack. With the ball already in the final third, these movements were designed to pull the defensive players out of position.

We see a similar situation here as RB Salzburg penetrate the Genk penalty area. In this example, Wober has won the ball deep in his own half before driving forward as Genk were poorly positioned to defend against the transition. Once again the two forward players are being supported by one of the advanced midfielders and RB Salzburg ends up in a 4 v 3 situation deep inside the Genk half.

‘Red Bull football’ as it is called is perhaps best known for its teams pressing high and hard when out of possession. So far this season RB Salzburg have put together elite pressing numbers but in this match, they preferred to sit in a defensive structure and set traps for Genk as they looked to play through the thirds.

As the Belgian champions tried to play out and build from the back we saw RB Salzburg take up a structure as shown above. The two forwards remained close to one another to support if one went to press. The four midfielders then positioned themselves deeper with the two wide midfielders tucked inside slightly.

This structure was intended to force the opposition to play into wide spaces as the centre was kept compact. As the ball then moved into wide areas we saw the pendulum move across to close the wide space and Genk suddenly found themselves closed down and crowded out.

We see this in action above. The structure and pressure in the central areas forces the Genk defenders to recycle the ball through the goalkeeper who then looks to switch the play out to the left side. As soon as the goalkeeper shapes to switch the play, we see the structure shift from RB Salzburg as they move across to that side to press and force a mistake from the Genk player receiving the ball.

Six goals in their first Champions League match is an impressive feat. Three of those were scored by the irrepressible Norwegian forward Erling Haland but the performance was about more than just the goals. They played at a tempo and with an intensity that left the Belgian side shattered- the Austrian side are known as a team who always play on the front foot. It will be interesting to see whether their style of play has to change in the matches against Liverpool and Napoli.

One thing is for sure though. Write them off at your peril.