After suffering a tough loss against their city rivals, LAFC were looking for redemption against the 2018 MLS Champions, Atlanta United. Atlanta managed to snag a last-minute win against DC United, who now sit just behind them in the MLS Eastern Conference. With both teams hoping to finish atop their respective conferences, this game was very important.

From a neutral perspective, the game didn’t disappoint. It had seven goals and resulted in a 4-3 win for LAFC. Find out how LAFC managed to edge out Atlanta United in this MLS tactical analysis.

There were no real surprises in this game, with both managers putting out strong teams. LAFC lined up in a 4-3-3 while Frank de Boer decided to continue utilising a three/five at the back system with Gressel and Mo Adams as wingbacks. Mo Adams replaced Justin Meram in the left wingback position for this game. 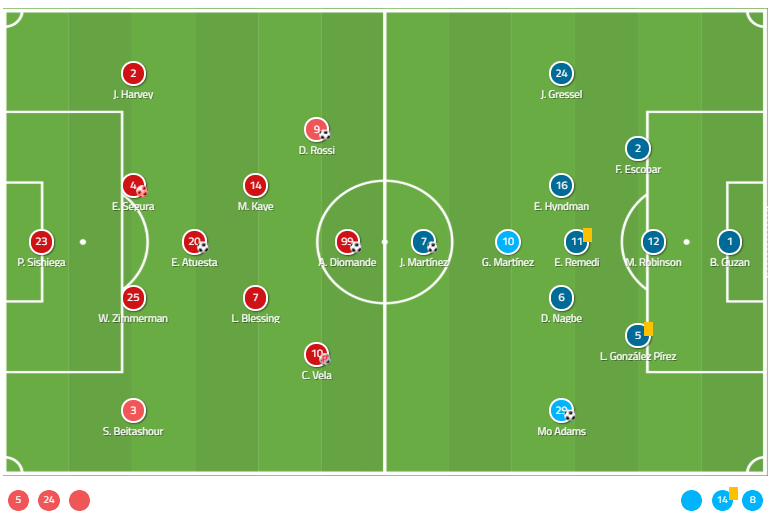 LAFC’s dynamic front three have been known to cause many MLS teams trouble this season. The speed of Rossi, Diomande and Vela allow them to run onto through balls from Kaye, Atuesta and Blessing with ease. LAFC’s possession-based style of play allows the midfield to circulate the ball until an opening in the opposition’s backline appears to play that perfect pass.

In theory, Atlanta United’s defensive back five tactics should have helped clog up these holes, taking away any opportunities for LAFC to penetrate their defensive lines on the pass. It would also make it difficult for players like Carlos Vela to wiggle their way through on the dribble.

Despite this, LAFC were able to exploit Atlanta United’s defensive setup in their favour. Atlanta failed to cover the space behind their fullbacks when they stepped to LAFC’s wide players. This left the defending champions vulnerable to balls into deep wide spaces.

This defensive setup also allowed LAFC to take control of the midfield. When defending in a flat back five, Atlanta were unable to prevent LAFC’s buildup through the middle of the field. In the images below we can see where LAFC were able to pick up possession in these pockets of space.

The combination of LAFC’s vertical ball movement and ability to find space in the middle of the field allowed them to, firstly, stretch Atlanta’s defensive lines and, secondly, play penetrating passes through those lines from the midfield.

In the following images, we can see Beitashour exploit the stretched Atlanta defensive line with a penetrating pass to Diomande. Diomande doesn’t run into the space and the pass is easily intercepted.

Despite not making the run in this particular instance, Diomande makes the correct run in the 33rd minute, from a similar scenario, to open the scoring for LAFC. The domination of the midfield come together for LAFC as they easily play through Atlanta United’s midfield trio during this passage of play. A quick one-two between Kaye and Blessing beats Atlanta’s lines, exposing passing options to find both Vela and Diomande in space.

Atlanta United did well to open the scoring in early minutes of the match, but struggled to create many other goalscoring opportunities for the rest of the first half. With a clear intent to attack the down the wings to avoid LAFCs high press, Atlanta were heavily reliant on finding wingbacks Mo Adams and Gressel during their buildup play.

Most of Atlanta United’s buildup was attempted down the left side of the field, making it easy for LAFC to defend. When Atlanta United’s left-sided defenders attempted to progress the ball on the dribble, two LAFC players would suffocate him on the touchline, resulting in him dribbling the ball out of play. The press also prevented any passing outlets to Mo Adams. We can see this in the image below.

Late into the first half Atlanta United capitalised on LAFC’s lack of concentration by taking a quick throw in. Atlanta United capitalise on this by getting a free cross into the box. The cross was missed by LAFC’s defenders and LAFC’s right wingback Gressel was able to play the ball back into Josef Martínez who closed the gap to two goals. By crowding Atlanta’s left side of the field, LAFC left themselves vulnerable on the opposite side of the field. We can see this positioning in the image below.

At the beginning of the second half, Frank de Boer substituted Mo Adams for Justin Meram. As soon as Meram was introduced into the game, Atlanta were much more dangerous attacking down the left.

Meram, once provided the ball by his Atlanta United teammates, was able to drive at the right side of LAFC’s defence. His delivery into the box was not as threatening as it could have been, but it did put the LAFC defenders under much more pressure. It also forced them to sit further back in a low block to prevent leaving any empty spaces for the Iraqi to dribble into.

Meram was vital in Atlanta United’s third goal, driving to the goal line and firing a dangerous ball across the face of the goal. The pass deflected off of Eddie Segura and into his own net, bringing the game back within one goal for Atlanta.

Soon after, de Boer brought on Ezequiel Barco for Gonzalo Martínez. This was an odd decision from the Dutch manager, as Martínez had been creating some good chances for Atlanta early in the second half. Despite this, Barco came on and added an additional pace to the left side of Atlanta United’s attack.

Barco and Meram were able to link up a few times to put the right side of Atlanta’s defence under pressure, sparking a tactical substitution from Bob Bradley himself. The American manager brought off right back Steven Beitashour for midfielder Lee Nguyen. This pushed midfielder Latif Blessing to the right side of the field where he took up an offensive fullback position.

Despite playing solely as a midfielder for LAFC, he played as a winger before joining them. This change meant that both Carlos Vela and Latif Blessing could attack up the right, forcing Meram to support defensively. We can see this in the image below.

Blessing’s pace was also a benefit to LAFC when dealing with Meram and Barco. The change limited Atlanta United’s offensive threat by pinning them back.

As this MLS analysis showed, LAFC’s clash with Atlanta United was brilliant for the neutral viewer. The game’s abundance of goals and tactical battles made this a brilliant viewing. Atlanta will feel hard done by to come out of this game without at least a point, conceding all four goals within a 12 minute period of LAFC dominance. LAFC take on New England next week, while Atlanta United host Zlatan Ibrahimović at the Mercedes-Benz Stadium.