On paper, group A of the UEFA Champions League seemed to be a straightforward group with European heavyweights Real Madrid and Paris Saint-Germain likely to claim first and second place. However, after two matchdays, the performances paint a different picture. Club Brugge claimed a valuable point off Real Madrid at the Santiago Bernabeu which could have easily been three, after losing a two-goal lead. Combined with their goalless draw against Galatasary on matchday one, they came into this fixture with two points when they could have so easily been on six.

Paris Saint-Germain were the only team in the group to secure two wins out of two and looked on course to claim another three points from the minnows in Belgium. However, their visit to Brugge wasn’t as easy as they thought. The Belgian side fought hard and outplayed the Parisians at times during the game.

This tactical analysis will analyse the tactics used by both coaches that saw them play out an interesting and feisty encounter in this UEFA Champions League group stage match.

The home side lined up in a 3-4-1-2 formation looking to apply pressure on Paris Saint-Germain whilst remaining defensively solid to contain the fearsome front three.  The two wing-backs would support the two main strikers in Emmanuel Bonaventure and Percy Tau. The two central midfielders would look to press and take on PSG’s midfield trio with their energy, pace, and dynamism and release the speedy front two. 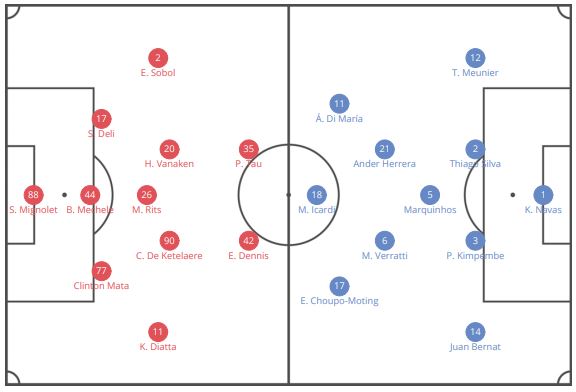 PSG, on the other hand, lined up in Thomas Tuchel’s standard 4-3-3 looking to control the midfield and allow the front three to cause havoc in attack. Mauro Icardi continued to lead the line and was flanked by Ángel Di María and Eric Maxim Chupo-Moting. They were, however, missing a few key players due to injury. Neymar’s European suspension was up but struggled with a hamstring injury. Kylian Mbappé and Edinson Cavani were fit enough to make the bench after returning from lengthy layoffs. Summer signing Idrissa Gueye was out of the squad altogether also due to injury.

Paris Saint-Germain out of possession

Brugge found spaces in the final third behind the full-backs and were a constant threat to PSG’s defensive line. There were often times in the first half which saw PSG being forced back into their own half trying to stop the attacking movements of Brugge. Tuchel enforced two major tactical points to counteract this: heavy pressing starting from the front three and getting numbers back in the defensive third.

The presence of Marquinhos at defensive midfield was a massive boost for the away side as he played the half-back role by dropping into the centre of defence to become a faux third centre-back. PSG took the form of a 5-2-1-2 formation out of possession to keep the central areas tight whilst offering extra protection in the wide areas. If Brugge caught them out with one swift movement, the PSG backline was seen slightly disjointed, too narrow or out of position. We will elaborate on Brugge’s attacking tendencies later in the article but Tuchel had set up the team to try and cover any gaps by keeping the midfielders closer to the full-backs. Brugge are often the underdogs in most European encounters and found themselves in positions such as the one above. They would much prefer to play in midfield and allow PSG’s defensive line to be higher up to use the space in behind. PSG’s response to their attacking movements was to drop their two wingers to counteract the numerical superiority Brugge tried to create in the half-spaces. While one of Ander Herrera or Marquinhos dropped into defence, Di María and Chupo-Moting both aided their full-backs in stopping the Belgian team from penetrating the backline. Here we can see Chupo-Moting slotting into a left-back position creating a back five for Paris Saint-Germain. One of Di María or Chupo-Moting was tasked with slotting into the wider areas depending on the side Brugge attacked down. Throughout the game, we saw Brugge’s wide players attacking the channels combining with their attackers. Tuchel was prepared for this and instructed his attackers to drop in when they didn’t have the ball. PSG’s heavy pressing was evident from the first few minutes of the half. Icardi, Di María, and Chupo-Moting were applying pressure on Brugge’s three centre-backs, trying to force them into a mistake. The upside of having a disciplined midfield is their ability to press the opposition. The pressing from the front three on the wide centre-backs forced them to play centrally which acted as a trigger for the midfielders. Marquinhos, Ander Herrera, and Marco Verratti looked to press Hans Vanaken and Charles De Ketelaere to try and stop them from playing balls back into the wide areas. Juan Bernat and Thomas Meunier both also pushed up into midfield to aid the press.  The problem was that while the front three were able to apply some pressure on the defenders, Brugge were able to find space in midfield and easily played balls to their unmarked wing-backs. The image above illustrates the distance between Verratti and Marquinhos to De Ketelaere. The young Belgian is able to play Krépin Diatta through.

The second half saw the heavy press continue and Icardi’s second goal was due to Di María’s high pressing which allowed PSG to win possession high up the pitch and score.

Right from the get-go, we could see Club Brugge look to attack PSG rather than sit back and create compact lines of defence and midfield. They played a quick and direct style of football from back-to-front to try and shift the ball quickly through midfield. That’s not to say they didn’t want to keep it tight at the back, but their front-foot strategy had worked against Real Madrid. The Belgian team set up in a 3-5-2 formation with a deep-lying defensive midfielder in Mats Rits tasked with protecting the back three and recycling possession to the front men.

Brugge looked to control the space in midfield to play through PSG’s defensive-minded central midfielders. Marquinhos and Herrera are much more efficient at defending and pressing whilst Verratti was the only one capable of threatening Brugge with his dynamic passing and dribbling ability. While they are proficient pressers and tacklers, they will not push forward. Vanaken and De Ketelaere wanted to impose themselves and exploit the space between the front three and the middle three.

Brugge primarily wanted to attack through the two wing-backs and overload the wide areas, especially the right-hand side. Tuchel prefers both his full-backs to push on and press the opposition wingers and full-backs to lure them in and switch play, but that inevitably leaves space in behind. They aimed to target the defensive deficiencies of Bernat by pushing multiple men against him to keep him back – often committing the wing-back, near sided central midfielder, and striker to create combinations to penetrate the Parisian back line between the centre-back and full-back making diagonal runs through.

Here we see an example of Brugge transitioning play quickly from defence to attack after dispossessing Paris Saint-Germain in their own half. Diatta starts the move by playing a long ball towards Bonaventure who lays it off for Vanaken. At this point, PSG are focused on the two Brugge players in possession allowing Diatta to continue his run unopposed. Charles De Ketelaere manages to flick the ball on for the right wing-back.

While the team was an attacking threat they had a mere six shots with none on target, making it very difficult for them to cause any real damage to PSG. The away team did well to nullify their threat with Thiago Silva and Presnel Kimpembe resolute in their defensive duties.

Paris Saint-Germain’s attacking line up may have secured them a dominant 5-0 victory but they initially seemed to struggle. The decision to start Chupo-Moting was forced under the circumstances. If the likes of Neymar, Mbappé, and Cavani were not injured, it was unlikely that the experienced forward was going to be given another start. PSG’s two best opportunities came through two long balls from defence, one of which played Di María in for Icardi’s goal. This was a testament to Brugge’s tactical planning and hard work. The Belgians’ 3-5-2 initially limited the front three from really gaining a foothold on proceedings but as the game wore on their influence grew. Icardi and Di María showed their gulf in quality with a well taken first goal.

The introduction of Mbappé for Chupo-Moting proved to be a turning point for PSG as they attempted to break down the Belgian team’s resolve. His movement and positioning was much more refined and for a start had more touches in the opposition penalty area. Mbappé’s seven touches compared to Chupo-Moting’s zero gave the teenage sensation a chance to utilise his clinical finishing qualities and bring his teammates into play. The tweak in the system by pairing Di María and Mbappé proved to be pivotal to unlocking PSG’s attacking potential. The link-up play between the two players was exceptional. The second goal saw Mbappé pick up possession in central midfield, play in his strike partner and interchange play within the opposition box before the Frenchman finished. His run into the box pulled three players towards him, giving Di María space to move into. Mbappé’s central position and pace allowed him to play through the Brugge central defenders giving them problems in keeping him quiet. Any player that possesses so much pace and intelligence can be a handful for even the very best defenders. The French centre-forward’s second goal was similar where he dropped deep to interchange play with his teammates and attempted a lung-busting run between Brugge’s defenders to latch onto Di María’s through ball.

Mbappé may have stolen the headlines because of his exquisite goals but Di María proved his undeniable quality and importance to PSG once again. The Argentine winger had three assists and pulled the strings especially in the second half. The analysis has shown the critical element Di Maria was to PSG. He picked up possession in key positions as well as intercept many (six) of Brugge’s passes.

After enduring a slightly discomforting opening 45 minutes, Paris Saint-Germain ended up comfortable winners. They continued their fine form heading into the next matchday after already thrashing Real Madrid, and they remain on course to finishing top of the group. Tuchel will be pleased to see Icardi settling in well and Mbappe picking up where he left off. Club Brugge can take solace in their performance having taken a point from Real Madrid away and showed glimpses of potential against PSG.