Even though Bayern Munich drew on the last weekend against Augsburg, and before that lost to Hoffenheim, in the UEFA Champions League so far they’ve only shown great performances. They bet Red Star Belgrade on the first matchday and then won against Tottenham away from home 2-7. In light of this, it was not totally clear what to expect from them.

On the other side, Olympiacos Piraeus got 19 points out of their first seven games in their national league but lost to Belgrade on the second matchday of the Champions League. So it was also questionable how they would perform in this game.

However, none of the two teams played really well as we will see in this tactical analysis. We will look now at the tactics which helped the Bavarians to win this game with 2-3.

Since Niklas Süle got injured in the last Bundesliga game against Augsburg, Benjamin Pavard had to play as a centre-back. The Frenchman was playing as a right-back most of the time this season and because of that Joshua Kimmich was able to play in the central midfield. However, because of Süle’s cruciate ligament rupture, they had to change some things. Kimmich had to play as a right-back and Javier Martínez replaced him in the central midfield.

David Alaba and Lucas Hernández completed the back four while Manuel Neuer was their goalkeeper. The two other central midfielders were Thiago Alcântara and Philippe Coutinho while Serge Gnabry and Thomas Müller played on the wings. Robert Lewandowski was, as always, the lone striker.

On the other side, Pedro Martins lined his team up in a 4-1-4-1 formation. José Sá was between the sticks while the back four consisted of Konstantinos Tsimikas, Yassine Meriah, Rúben Semedo and Omar Elabdellaoui. Guilherme, Mady Camara and Andreas Bouchalakis played in the central midfield. Georgios Masouras and Daniel Podence were the wingers and Youssef El Arabi played as the single striker.

Right from the beginning, the match was as everyone expected it to be. Bayern had more possession and dominated the game while Piraeus stayed deeper and concentrated on the defending and counterattacks. To do so, they stayed in their 4-1-4-1 formation which sometimes turned into a 4-5-1 depending on the three central midfielders. Anyways, the lone striker El Arabi mostly put pressure on Bayern’s players at about the halfway line. Besides, the back four didn’t stay that deep to have a very short distance between the defenders and the midfield line. This can be perfectly seen in the image below.

On the other side, Niko Kovač’s team had most of the time the ball and dominated the match. However, especially in the first 30 minutes, they never got really dangerous since they weren’t able to progress the ball further up the pitch and get into dangerous areas. The Bayern players mainly played horizontal or back passes to circulate the ball but were rarely able to get behind the back four of Piraeus or into the space between the lines.

When they had possession, the two centre-backs as well as Martínez were responsible for the circulation of the ball during the first phase of the build-up. Additionally, the two full-backs also stayed really deep. Thiago and Coutinho mostly tried to open up passing lanes in the half-spaces while the wingers stayed wide and while Lewandowski positioned himself in the centre most of the time, he also sometimes moved into the half-spaces.

However, since all members of the back four plus Martínez stayed deeper, there weren’t that many players of Bayern in the higher lines. This was one of the main reasons why they weren’t able to get into dangerous areas. The two other reasons were that players like Gnabry and Müller seldom started deep runs which you need to open up such compact opponents as Piraeus were; and secondly, the ball circulation was mainly too slow and they didn’t switch the sides quick enough to open up the opposition. Because of these three aspects, combined with a good defending approach from the Greeks, the Bavarians almost never broke through in the first 30 minutes.

In the image below, we can see a typical scene of the opening phase of this match. The central area high up the pitch is completely vacant and no man of Bayern occupies this important space. Due to that, they weren’t able to progress the ball further up the field to get into dangerous areas.

Coutinho and Thiago are surely among the best players in the world when it comes to their technical abilities. In the light of this, to have these two men in the offensive midfield can be extremely dangerous for the opposition. Yet both of them didn’t receive that many passes at the beginning of the match since they positioned themselves between the lines while the Greeks perfectly cut off the passing lanes.

Due to that, after about 10 minutes, Thiago decided to drop deeper to get more often on the ball. In these situations, he came back on the right side where until then Kimmich was positioned. The German then pushed a bit forward, although the same problem still occurred because they didn’t have enough players in the higher lines. Thiago got more often on the ball but it didn’t pay off in any way since he was in such a deep position when he received a pass as can be seen in the example below.

One of Bayern’s greatest weaknesses since the arrival of Kovač is clearly their defending of counterattacks. This appeared once more in this match too. Since they didn’t have enough players high up the pitch when they were in possession, this meant they didn’t have that many men around the ball to execute an effective counter-pressing as soon as they had lost the ball. Because of this, Piraeus were several times able to start dangerous counterattacks and in some occasions, there was a huge empty space between the back four and the midfield of Bayern, which the Greeks tried to exploit as shown in the image below.

Therefore it was no surprise that the 1-0 for Piraeus which they scored in the 23rd minute came as a result of a counterattack. They were able to quickly change the side after they had overcome the counter-pressing of the Bavarians. Then Al Arabi converted a beautiful cross into a goal with a great header to bring his team in front. 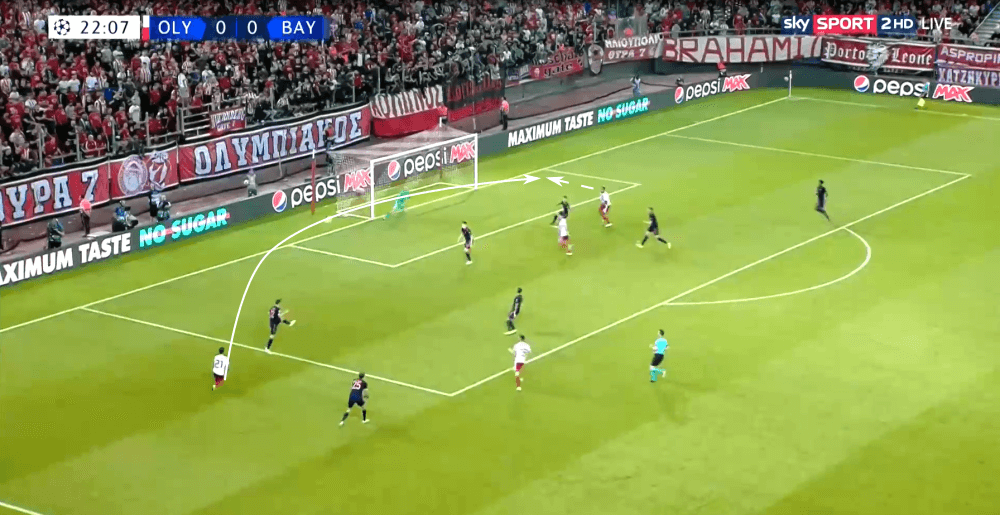 After about 30 minutes, the Croatian coach made some adjustments since his team didn’t play well at all. The Bavarians played from there on in a 4-4-2 formation. The back four stayed the same while Coutinho became the left-winger and so Gnabry went on to the right wing. Thiago and Martínez stayed in the centre while Müller joined Lewandowski up front. You could instantly notice the German feels far more comfortable playing in the centre than in the wide areas. 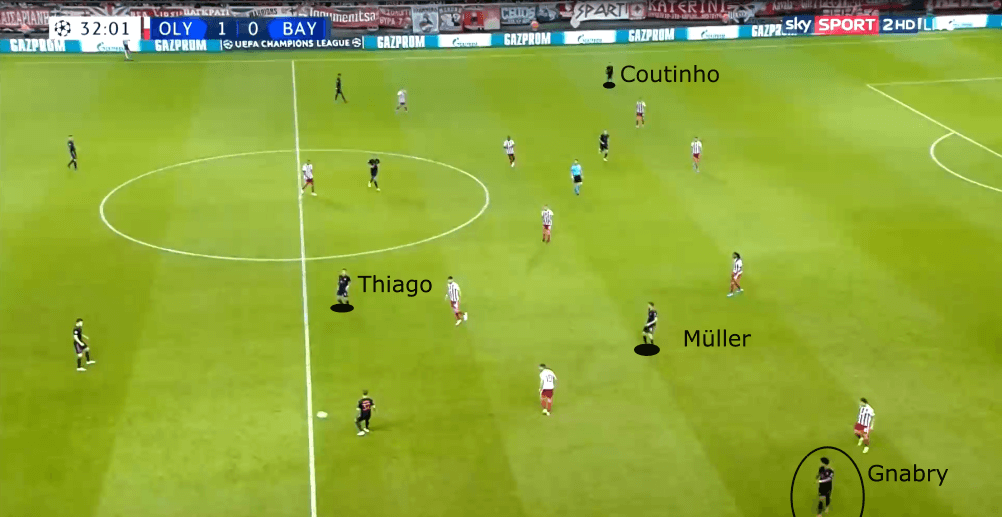 In addition, Kimmich and Alaba positioned themselves higher up the pitch to have more options for forward passes. Besides the German right-back, Gnabry and Müller changed their positions several times which can be seen in the image below.

Having several players high up the pitch led to the 1-1 just moments after the adjustment. Martínez crossed the ball into the centre where he found Lewandowski. The Pole laid the ball off for Müller who took the ball with a great volley. Sá was able to save the shot, but then Lewandowski scored. As you can see in the image below, ahead of Martínez’s cross three Bayern players are in the penalty box and Müller is at the edge of it. This is a clear sign that Kovač told his men to get more players into the dangerous zones high up the pitch. 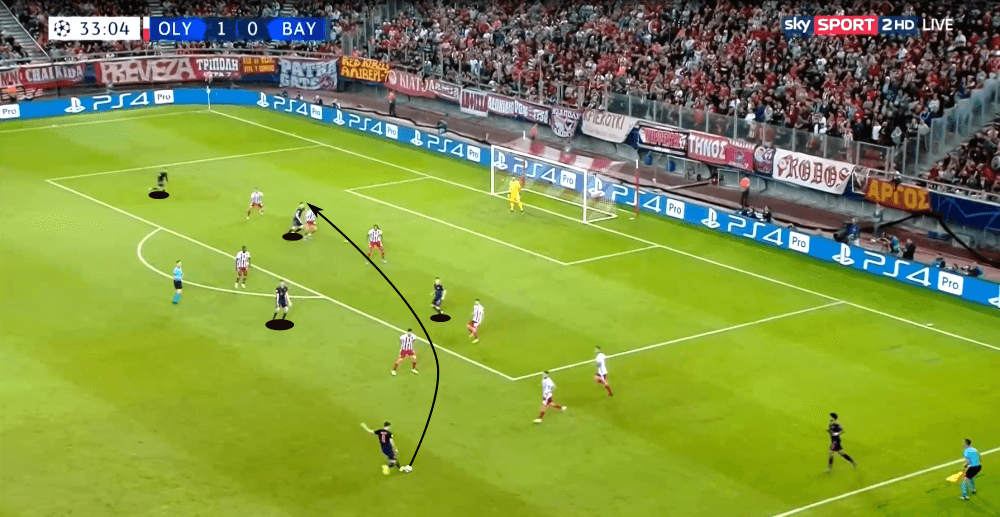 Even though Kovač made some adjustments during the first half and had the chance to talk to his players during the halftime, his team performed poorly in the second half. Both of their goals in the second half were a result of their individual quality as their second goal came as a result of a great move from Lewandowski, while the third was a fine shot from outside the box by Corentin Tolisso.

The problems remained the same as they were still rarely able to get into dangerous areas and their counter-pressing was also not executed well. Besides, there was sometimes way too much empty space in the centre in which Olympiacos tried more often to exploit since they got braver in the second half. Luckily for the Bavarians, the Greeks weren’t strong enough to exploit the weaknesses of Kovač’s team. In the example below, we can once more see a huge empty space in the midfield of Bayern. 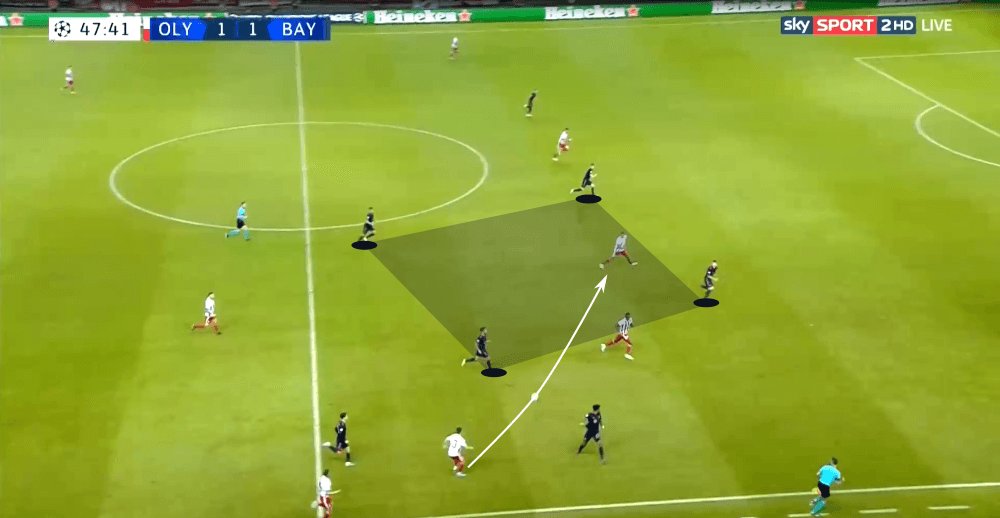 As the game came closer to the end, the Greeks were able to score to make it 2-3 with the aid of a deflected shot. Before and after that goal, they tried everything and it was just the two centre-backs and two central midfielders who stayed deeper while the rest of the team pushed forward as displayed below. They showed that they wanted to get a draw, but they just weren’t able to create any goalscoring opportunities and in the light of this, Bayern deserved to get away with the victory. 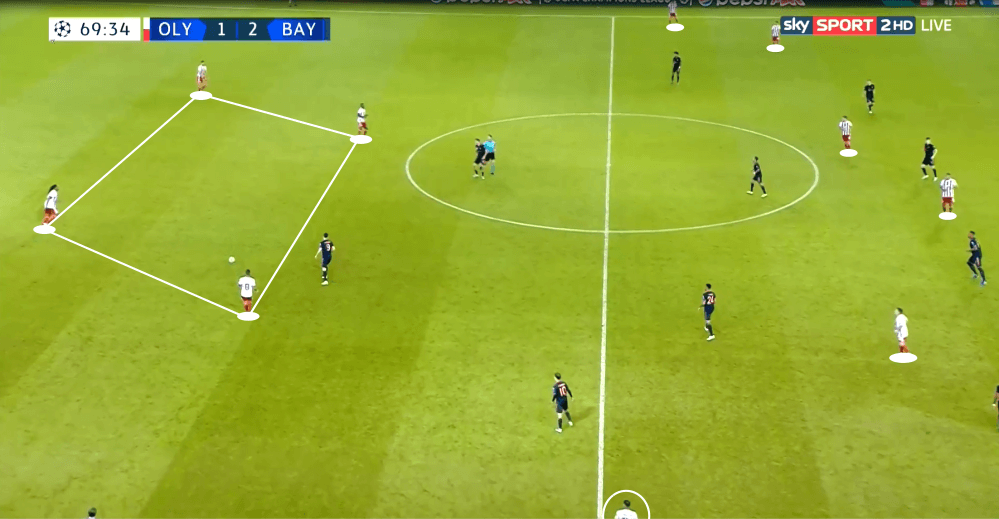 As this analysis showed, both teams didn’t perform well and, in the end, the individual qualities of Lewandowski and Tolisso decided the match. The bad news for Bayern is that in this game Hernández has also got injured. Even though it’s not clear yet how long he will be out, Kovač’s two favourite centre-backs are currently not available. It is most likely the central defence will now consist of Pavard and Jérôme Boateng within the next few games.

On the other hand, the Bavarians have got nine points out of their first three matches of the group stage and because of this, they’re almost surely through to the next round. However, Piraeus will have to fight in the remaining three games to either get into the round of the last 16 in the UCL or reach the knockout stage of the UEFA Europa League.