February means two things, wet weather and Champions League football. This week was the return of the hallowed competition, where Atalanta met Valencia in the first leg of the knock out rounds. The San Siro played host to the fixture as the Italian side’s home ground is undergoing serious construction work to keep up with the clubs flourishing success. The 51 km journey was no wasted journey for the devoted home fans who watched their side win in an entertaining 4-1 victory, seemingly putting the tie to bed already.

In this tactical analysis, we look at the tactical fluidity of Atalanta and how they penetrated Valencia’s tactics at will. We also provide an analysis of how Valencia’s defensive system suffered heavily and where their tactics need to improve. 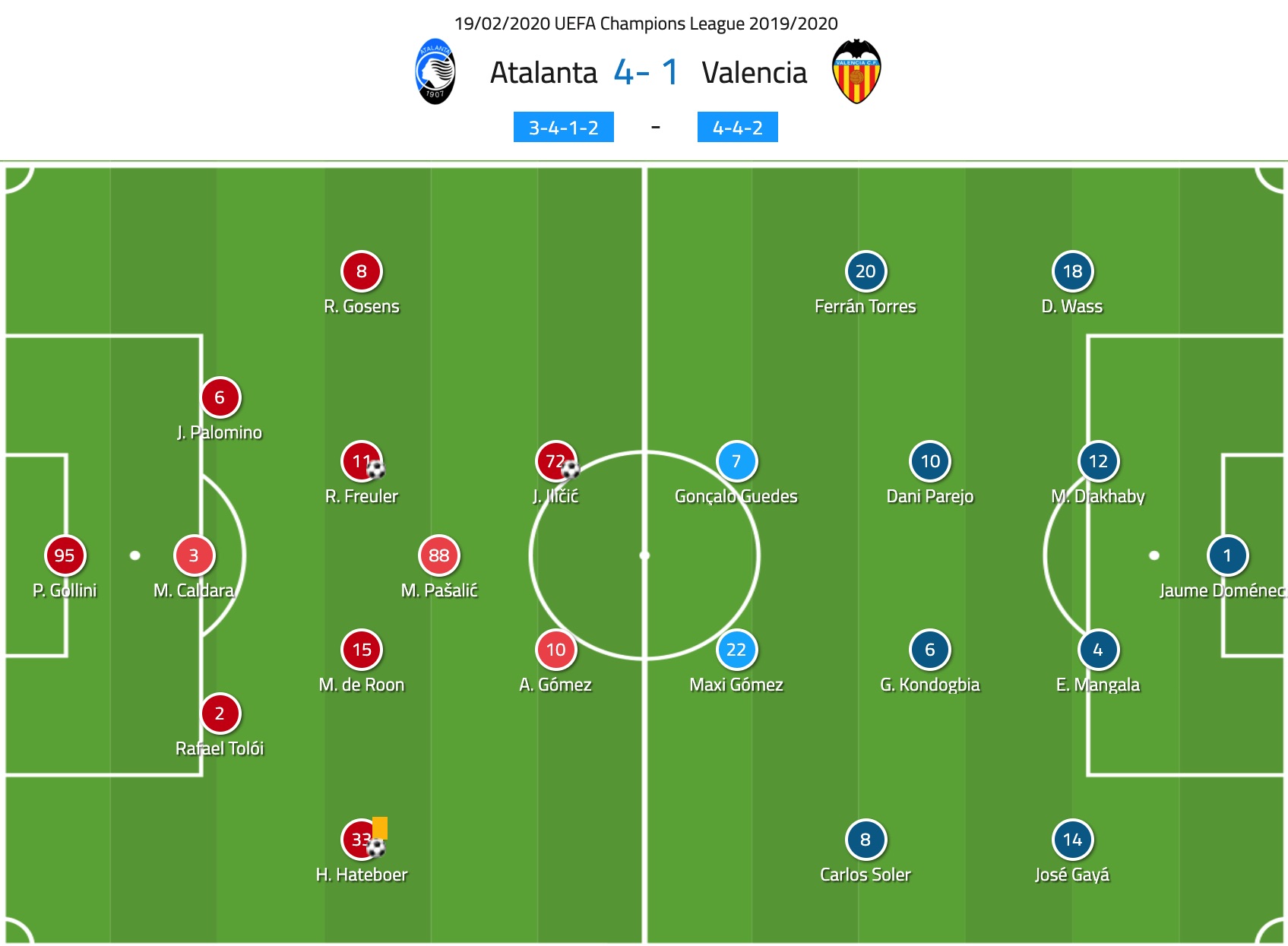 Gian Piero Gasperini lined his team up in his favoured dynamic 3-4-1-2 shape. This system allowed the wing-backs, Hans Hateboer and Robin Gosens to attack liberally as the additional man in defence covered their movements. The midfield was made up of Remo Freuler and Martin De Roon, who sat at the base, looking to collect the ball from the defensive third as they moved the ball through the phases. Mario Pašalić was positioned slightly in front of the base, using his position between the lines to connect the attack for the home side. The fearsome duo of Alejandro Gómez and Josep Iličić led the line for La Dea. The pair alternated between showing for the ball in passing channels through a rugged midfield line and running beyond the struggling backline of the away side.

Valencia started the game in a traditional 4-4-2 shape. This wasn’t a system that was in any way similar to the one we saw Atlético implement against Liverpool the night before, however. Albert Celades, instead set his team up to be open and offensive, which was ultimately the Spanish side’s downfall as they failed to adjust in the transitional phases, which we look at later.

Geoffrey Kondogbia and Dani Parejo took the central positions in midfield. Parejo, was more offensive-minded, looking to support Gonçalo Guedes and Maxi Gómez in offensive transition. This left Kondogbia to provide the protection to centre-backs Eliaquim Mangala and Mouctar Diakhaby, however, this proved not to be enough as Atalanta cut through the central spaces with ease. Carlos Soler and Ferran Torres occupied the wide spaces. They were ineffectual for large periods as the home side forced them narrow when out of possession, leaving them out of position when possession was turned over.

In possession, the hosts were exciting and forward-thinking, making 142 forward passes – double that of those they played backwards. Short passing was used to develop attacks through each phase of the pitch, with the additional centre-back allowing overloads in the early stages, providing a secure foundation from which to start.

As the ball moved through the phases into the final third, Atalanta varied their approach. The home side used the width of their full-backs to stretch Valencia’s narrow midfield four. Shifting the defensive unit of their opponents from left to right in possession cycles pried open passing lanes into the attacking three players. Once the spaces were opened, the technical ability of Gómez and Iličić shone through. Their ability to work in tight spaces and 1v1’s allowed Atalanta to take an early lead and achieve an xG of 1.64, creating a chance worth 0.32 xG in the first 10 minutes.

Out of possession, Atalanta were aggressive but not cavalier. On turnovers of possession, they quickly transitioned into a robust mid-block, using a high line – seen above – to confine the space in the middle third. This tactic allowed an aggressive man-to-man press to be implemented once the ball entered the middle third of the pitch. Recovering the ball in a slightly deeper position on the pitch also allowed for more counter-attacking opportunities.

Despite the scoreline and their pass map looking distorted, Valencia were good in possession. The visitors edged possession with 53.53%, which was achieved by the width they attempted to create when in possession. As mentioned, though this made for an entertaining spectacle, it was Valencia’s downfall as they struggled to recover in transitions.

In the early stages of possession, Valencia set up to play short, splitting the centre-backs and bringing Kondogbia deeper to create pathways into midfield. This was actually a decoy as the purpose of this positioning was not to allow play from the back, but to pull Atalanta from their tight-knit mid-block. By dragging Atalanta forward, Valencia were able to find spaces into the wider areas by using mid-range passes from the goalkeeper. We can see above how little Pierluigi Gollini (1) opted to use his back four, instead, looking direct earlier.

Out of possession, Valencia were poor. We look at this in more detail later, but worryingly for the visitors, the problem stemmed from multiple issues. The gameplan switched between a high man-to-man press, which comes with the inherent risk of being open defensively and dropping deeper in a narrow shape. Both systems conveyed flaws within the tactics, which Atalanta capitalised on, multiple times.

The first problem Valencia faced came as a result of their aggressive pressing. In the first part of the game, Valencia looked to aggressively force turnovers high up the pitch, in doing so they achieved an early PPDA of 5.5. Depending on the ball side, Valencia used six players to apply pressure to the ball-player and cut-off his options with man-marking and shadow marking.

When it worked, it worked well. On recoveries, like the one shown above, Valencia obtained possession in a dangerous area with a 3v3 situation unfolding. The problem with this tactic is the high risk attached to it. With Atalanta being so good off the ball and having a rotational axis consisting of three midfielders, they could often beat the press by moving the ball quickly – not giving Valencia a chance to sustain the press.

Above we see another attempt from Valencia to press high. This time, however, Atalanta move the ball across the pitch quickly, which gives Valencia too much ground to cover and too little time to get tight enough to implement and effective press. 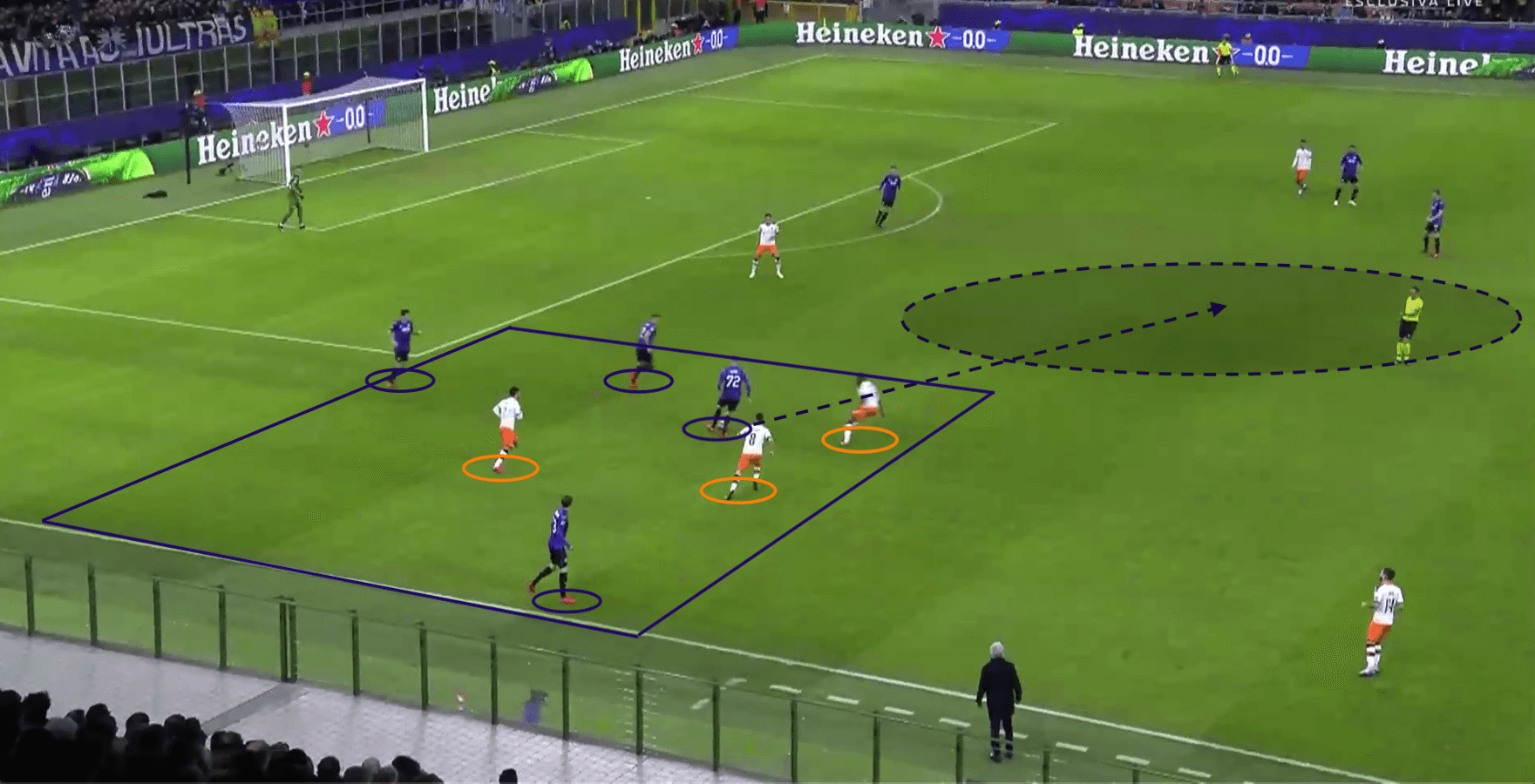 With the gaps appearing in the press as each player arrives late to their respective man, Atalanta are able to create a 4v3 overload which they use to work the ball into space. From this point, we can see that large spaces in midfield that are now open for exploitation as Valencia’s players are lost in the failed press.

Spaces in the wrong places

The second deficiency in Valencia’s approach is two-part and stems from their tactics used when in the offensive phase. It is well known that a basic but fundamental rule of football is to make the pitch as large as possible when attacking and as small as possible when defending.

Applying this mantra, Valencia positioned their full-backs on the touchlines, as they attempted to stretch the Atalanta shape. Torres and Soler moved inside, into the half-spaces, creating passing lanes to connect defence with attack. In the early stages of possession, this tactic worked, Valencia were fluid and secure in possession. It was in the final third were the tactic took its toll on them defensively.

As the play developed, Valencia approached the Atalanta block, who as we can see, have stayed narrow, forcing Valencia wide. The ballplayer has multiple options thanks to the width created by the full-backs. Sadly for the visitors though, they were wasteful in possession, and the ballplayer is caught in possession.

The large spaces created in the offensive phase now need to condense in the transitional phase, but due to the distances between each player, this takes considerably longer when possession is turned over. Atalanta benefitted heavily from this prolonged defensive transitional phase as they burst into the open spaces, countering on the opposition. As a result, a massive 40% of Atalanta’s counters resulted in a shot at goal.

It was these defensive frailties that prevented Valencia from taking anything from the game. Their attacking positions were good and they wasted some golden opportunities that will keep Celades awake at night. The away goal keeps a glimmer of hope alive in the tie, as Valencia now require a mammoth performance at the Mestalla, but without tightening up the defensive shape, a three-goal deficit looks a step too far for this side.

The fairytale continues for the small Italian club who are taking unprecedented steps in the club’s history. A side filled with individual talent, depth and tactical cohesion makes this side a dark horse in the competition. Despite being runners up in the group, knockout football is a different animal, and being a side that can defend and create chances, Atalanta will fear no one in the rounds to come – providing they see out the remainder of this one.