This Tuesday night, Napoli will host Barcelona in the round of 16 of the 2019/20 Champions League campaign. The Italian team had a tough start to life with Gennaro Gattuso at the helm but are quickly catching form just in time to host the La Liga leaders at their home ground and make their lives rather difficult.

Even though Barcelona are the slight favourites, this tactical analysis preview will look to give you both teams’ tactics and use analysis in order to determine where their chances in the clash might lie.

Even though Napoli generally enjoy more possession than their opposition in Serie A (55.35%), it’s fairly safe to assume that Barcelona will likely have more of the ball come Tuesday night. For that reason, this might be something new for Rino and his troops and he will have to adapt his tactics accordingly.

Generally speaking, however, Napoli tend to deploy a 4-4-2 defensive system when facing a team that’s building up from the back and that’s exactly what we can expect Barcelona to do. The Italians will then likely set up in a mid-block that would prioritise a compact formation and keep all central penetration to a minimum.

We’ve seen them do that well against bigger teams such as Juventus and Inter Milan in the past – the main aspect will be to keep track of the opposition’s key members and keep them tightly man-marked, as they did with the Nerazzurri in the image below.

Notice how there’s basically no way through the middle of the pitch as Antonio Conte’s men have no open channels towards their creative sparks in the opposition’s half. Doing this efficiently will be crucial for Napoli if they want to keep Barcelona’s midfielders quiet throughout the game.

But this is also where certain problems may arise for the Italians. Even though they can deploy a tight and compact block that would, in theory, send Barcelona out wide where they can be either collapsed upon or forced into a crossing situation, they have struggled to maintain their defensive solidity under Gattuso in 2019/20.

Napoli have been guilty of leaving huge gaps in their shape and this has consistently allowed their opposition to position their players in between the lines and receive and progress the ball with relative ease.

Notice below how Inter find a way around their block with intricate movement to get rid of the markers and find those pockets of space to exploit.

Similarly, here’s another example when their compact shape just wasn’t tight enough to stop the ball progression and as a direct result of that, the opposition can progress the ball with relative ease and get it onto the higher platforms on the pitch.

Barcelona have exceptional midfielders who are excellent at creating space for themselves with their positioning and movement and their centre-backs are brilliant on the ball and very able to thread the passes and break the lines when necessary.

This could be a big problem in their defensive approach against the Catalans and Gattuso will have to keep his team compact if he is to successfully repel their attacks throughout the game.

In principle, Barcelona and Napoli share a similar view as far as their build-up tactics are concerned. The Catalans start with the centre-backs and usually get the support of a single pivot who likes to drop deeper to assist the progression of the ball.

In case of a higher press with multiple opposition players storming their first-third, similarly to Napoli, Barcelona will drop an additional midfielder to combat the inferiority they might be facing. However, a key thing to note about Napoli is that generally, they are not a high-pressing team – with an average 14.39 PPDA value this season (passes allowed per defensive action) – and are likely to default to their 4-4-2 mid-block which we’ve discussed earlier in this tactical analysis preview.

But even though the Catalans are fairly well equipped to invite the press and disperse it, they still seem to struggle to contain it at all times. This might be a chance for Napoli if they can coordinate their press and shut down their passing channel successfully. We’ve seen them do it before and if the ball is recycled to the full-backs who are not necessarily positioned high up the pitch or if it goes back to the goalkeeper, that usually triggers the Italians’ press.

Notice below a well-executed man-marking system from Gattuso’s team against Juventus with their mid-block slowly pushing up the pitch and eventually forcing the Bianconeri’s goalie to kick the ball out of bounds. 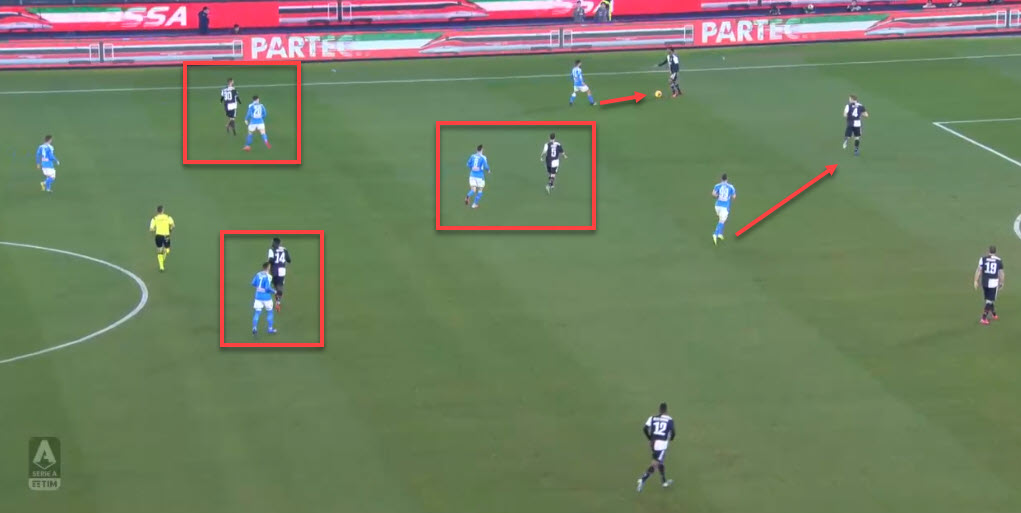 But it’s likely that Napoli have not faced a team that involves their goalkeeper in the build-up scheme as much as Barcelona do. Marc-André ter Stegen is arguably the best sweeper-keeper on the planet and his footwork is on par with many outfield players out there.

The Blaugrana often use him as a tool to invite the press and then send a fantastic through ball, breaking the lines and finding the free man upfront and behind the pressing unit’s backs. We’ve seen him do that numerous times throughout the season and it will undoubtedly be one of the ways Setien sets his team up on Tuesday night.

Notice below how they used the German keeper to advance play from the back as he threads a ball to the dropping midfielder, in this case, Ivan Rakitić, and Barcelona get beyond the first line of press with ease.

In these situations, Ter Stegen will act as a third man in the defensive backline, positioning himself higher up the pitch and between his centre-back pairing, essentially acting as an additional outfield player in the build-up phase.

This means that Barcelona have a numerical advantage over the pressing unit and with two midfielders dropping deeper to receive the ball, it gives the goalie multiple passing options to choose from. You can see a similar scheme in the graphic below.

Following the shift of midfielders, the forward line also moves as one of Griezmann or Messi drop deeper into the midfield to sustain that numerical superiority and offer additional channels to progress the ball on a higher platform once again. 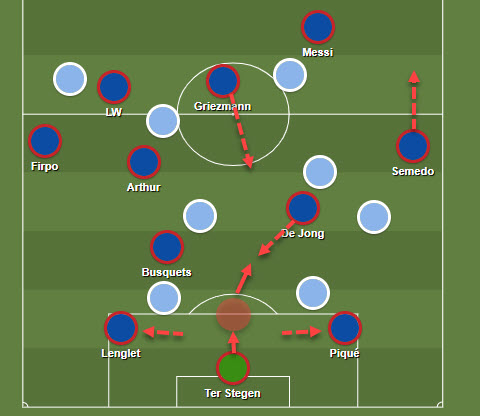 But this is not the only way they are using their goalkeeper to avoid the pressing unit of the opposition. Usually, they will either push the full-backs higher up the pitch and out wide so that a long ball over the top can go beyond the press and into the free man.

Alternatively, if Barcelona have a focal point to target, which is usually Luis Suárez, Ter Stegen will aim for him and then they look to win the second ball that bounces off of the Uruguayan. But since he is unavailable for the clash, it’s unlikely they pursue these specific tactics.

But they could still go for the wide players who should be bursting into space. We’ve seen them do exactly that on multiple occasions this season as Ter Stegen plays a long ball over the press and into the path of a rushing winger, as can be seen below. 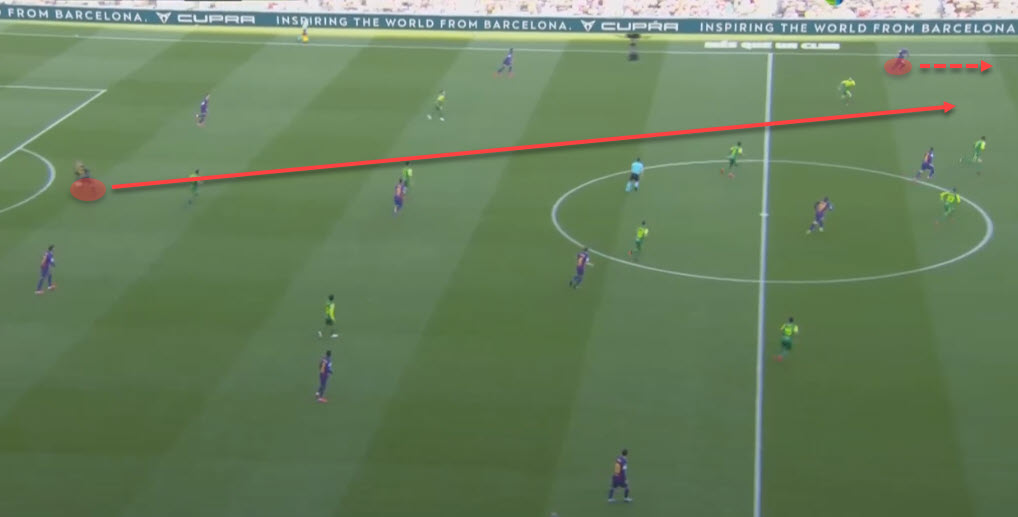 Even though Barcelona have numerous means of advancing the play, escaping the press and getting into the final third, they are not completely invulnerable nor do they always execute their tactics perfectly.

In the last four games, they’ve been especially sloppy in possession and in the execution of their possession-heavy style. In 2019/20, they have averaged 91.7 losses but in the last three out of four games they’ve played, the Catalans have totalled much more than that per game, tallying 118 against Eibar at the Camp Nou prior to the clash with Napoli.

This is definitely a chance for Napoli to pounce and capitalise on the Blaugrana’s insecurities in possession and initiate one of their extremely efficient offensive transitions. With troopers like Fabián Ruiz in tow, the Italians have the right calibre of players who can recoup the possession and then thread the ball forward for a deadly counter. Notice below how Ruiz does exactly that following the recovery of possession and finds his teammates higher up the pitch for a quick counter against Fiorentina. 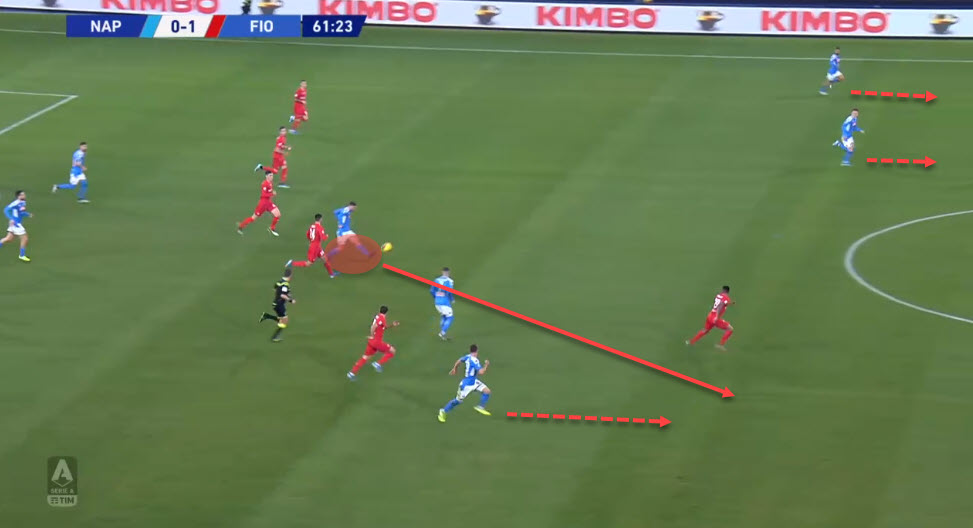 The Italians also have the knack of successfully exploiting the space that their opposition leave behind their backs. It’s not too often that they face a team with an extremely high defensive line in Serie A but Barcelona play with those tactics almost exclusively and are sure not to deviate from it on Tuesday.

If they can time their passes correctly and find the links between their attacking players, Napoli have more than a decent chance of hurting their opposition. Once they get into the wide areas, they can use their pace and crosses to take the advantage in the clash.

Barcelona, however, will be aiming to minimise the damage Napoli can do by maintaining overloads in their build-up play. Intriguingly enough, this is something that the Italians consistently struggle with.

Their midfield can be too disjointed in the defensive phase as it is but they also get overrun when the opposition put them in numerical disparities. And fortunately for the Catalans, they almost always look to create overloads all across the pitch by dropping one of the forwards into midfield our pushing them out wide.

Usually, it’s Lionel Messi who takes a much deeper role to advance the ball but under Setien, we’ve seen Antoine Griezmann do the same so that the Argentine can stay higher up the pitch. You can see two clear examples of those tactics in the following images where the French forward creates overloads by dropping deeper or shifting out wide. 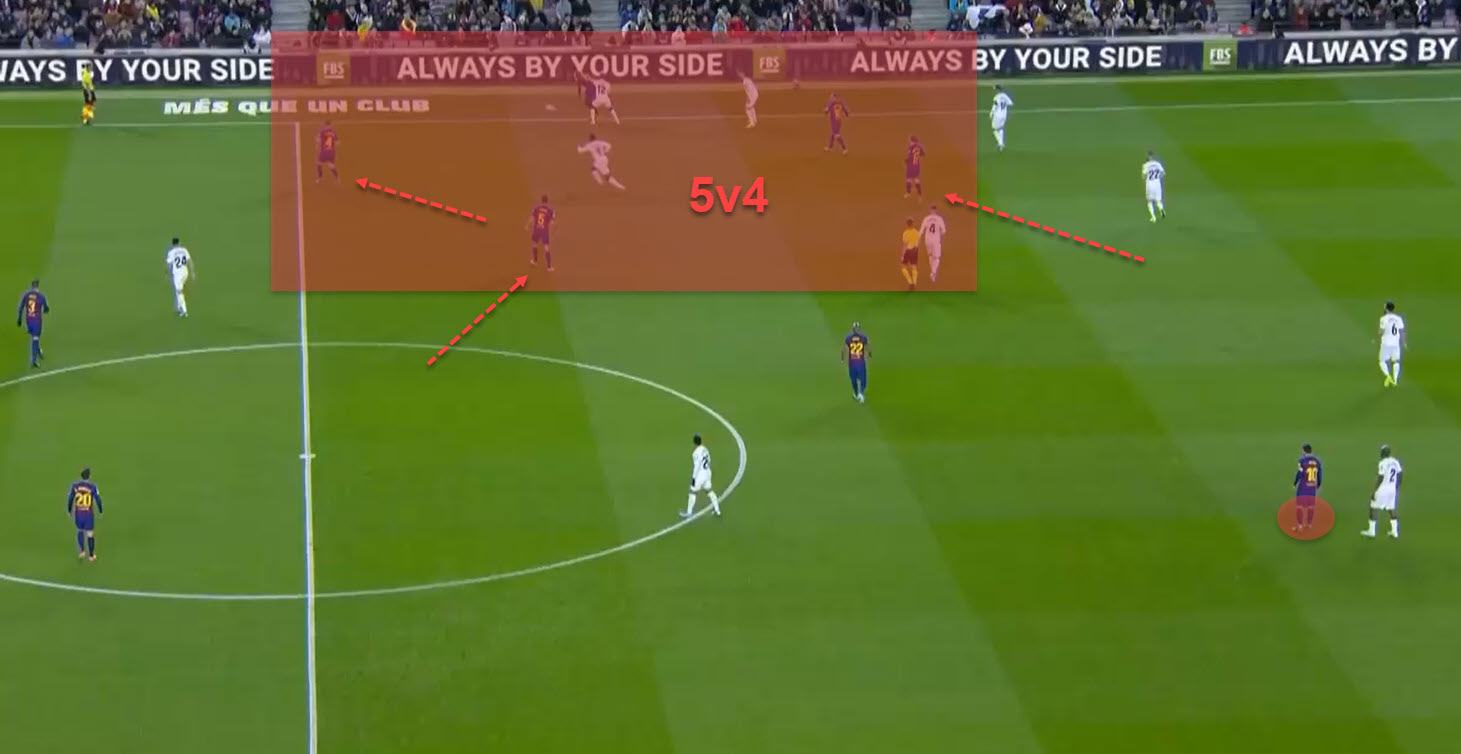 On paper, Barcelona are still slight favourites and should go into the match feeling confident, especially following their 5-0 routing of Eibar in La Liga, with Messi rattling the inside of the net four times to completely take over the game.

But there are certainly gaps to be exploited in their tactics and this tactical analysis has hopefully shed some light on Napoli’s potential routes to victory. As far as lineups as concerned, here are some possibilities for both teams:

There shouldn’t be any major surprises for the clash from either side. For Gattuso, the choice between Mertens and Milik will be entirely up to him as the players do provide different kind of service in the final third.

The former could be better used in combination play with Insigne but if the coach decides to put emphasis on crosses into the box, Milik’s aerial presence might be key. The same basically goes for Callejón and Politano but with the exploitations of the wide areas and pacy runs, it’s likely the former gets the nod.

As for Barcelona, with Roberto out with an injury, that right-back position is almost certainly Nélson Semedo’s and it will be interesting to see whether Vidal makes the lineup or not. Either way, if Napoli successfully shut down the space between the lines and stay compact, the Chilean’s presence might be needed at one point in the game, possibly from the left side or in a 4-4-2 diamond system.

The Catalans do have a slight edge going into the clash and for that reason, we’ll go with a 1-2 victory for them on the night to wrap up this tactical analysis preview.