Thomas Tuchel, to date, has had Pep Guardiola’s number in their battles as Chelsea and Man City coach respectively. Towards the latter stages of last season, the two clubs faced each other three times in the span of five weeks, with a collective score of 4-1 in Chelsea’s favour. Tuchel’s men have had a slightly stronger start to the campaign, and Guardiola’s team are always a question mark in big games, but this fixture presents a good opportunity for a statement victory from the two title favourites.

This tactical analysis will take a look at the tactics of both teams, the line-ups they could choose, and a final score prediction.

Mendy looks set to come back after a two-game absence in goal, N’Golo Kanté picked up a minor injury midweek making it unlikely that he will feature, Saúl Ñíguez put in another subpar display meaning he won’t be in the starting XI, and despite arguably being MOTM against Aston Villa, Reece James will probably have to stick to the bench for this game. Thomas Tuchel could reinstate Mason Mount into the team, but after a couple of good displays on the bounce, it is likely we will see Werner feature again.

Pep Guardiola has some task on his hands between building up the fitness of certain members, and not overworking others too much, with three big away days consecutively. The likes of Aymeric Laporte, John Stones, Rodri, and İlkay Gündoğan are all likely to not feature due to injuries. Aké is on standby for the first two, whilst Fernandinho can step into midfield, despite age seemingly catching up with him now. Bernardo Silva could start, but de Bruyne and Foden are key players, Guardiola will want them back in the team starting as soon as possible.

Werner could be a key difference-maker

In Chelsea’s last two fixtures, Werner has played a key role in Tuchel’s team generating chances and getting on the end of some opportunities himself. When he came off the substitutes bench versus Spurs, Chelsea were already 2-0 up, but he added a dynamism to the attack that meant Tuchel’s team were able to keep the tempo high and continue to swing the game in their favour. He ended that game with an assist for Rüdiger, and it rounded off an energetic and useful performance.

From the start against Villa, Werner’s running of the channels was relentless, and although he made a few errors with his decision-making in the final third, he provided an overall benefit to the Chelsea attack that a player like Kai Havertz has not been bringing lately. He went off with a minor knock on the 90th-minute mark, but if he is available, Tuchel should have few worries about starting him – he has given City plenty of trouble in the past. 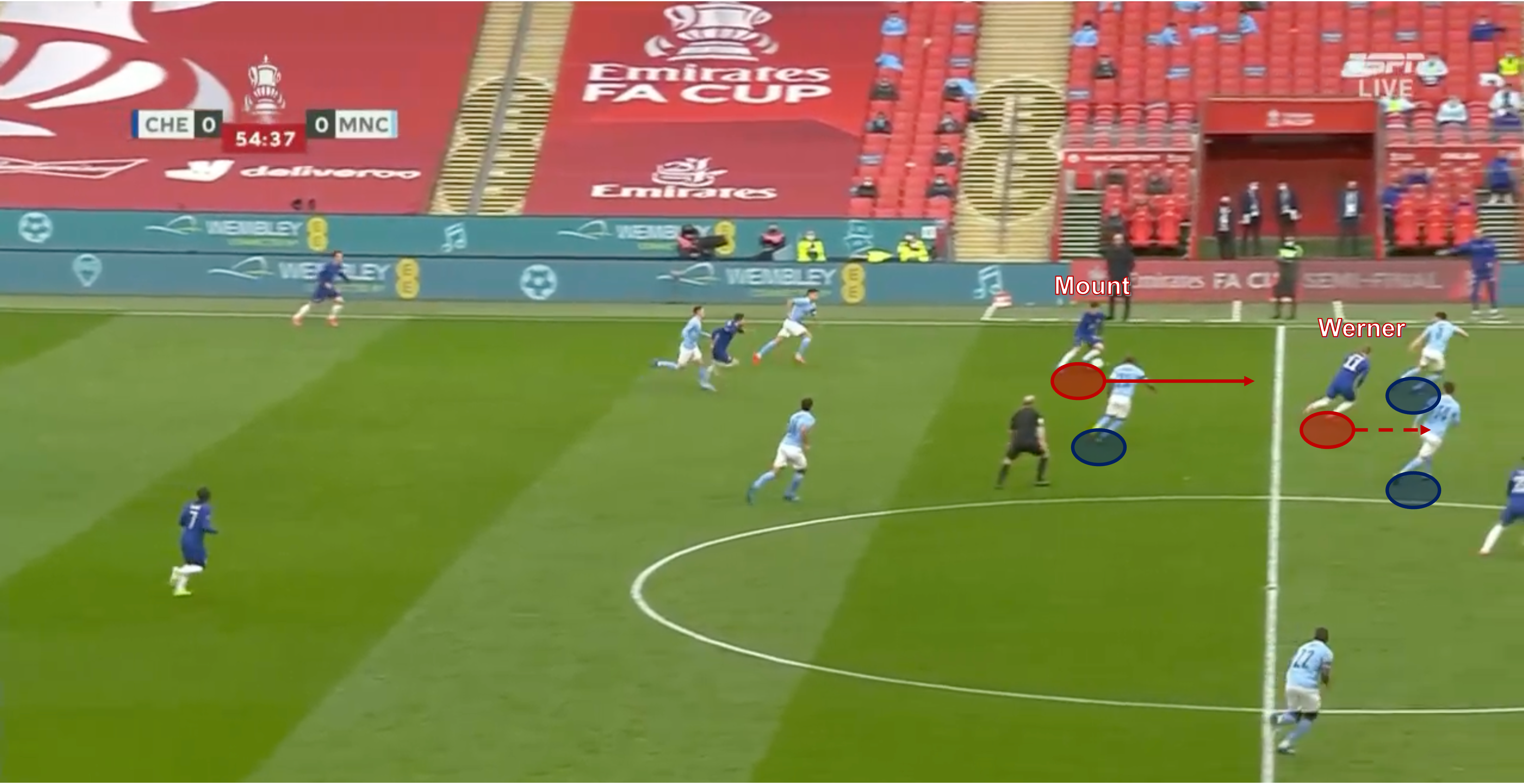 Mount picks up the ball here and Werner is immediately on the run. 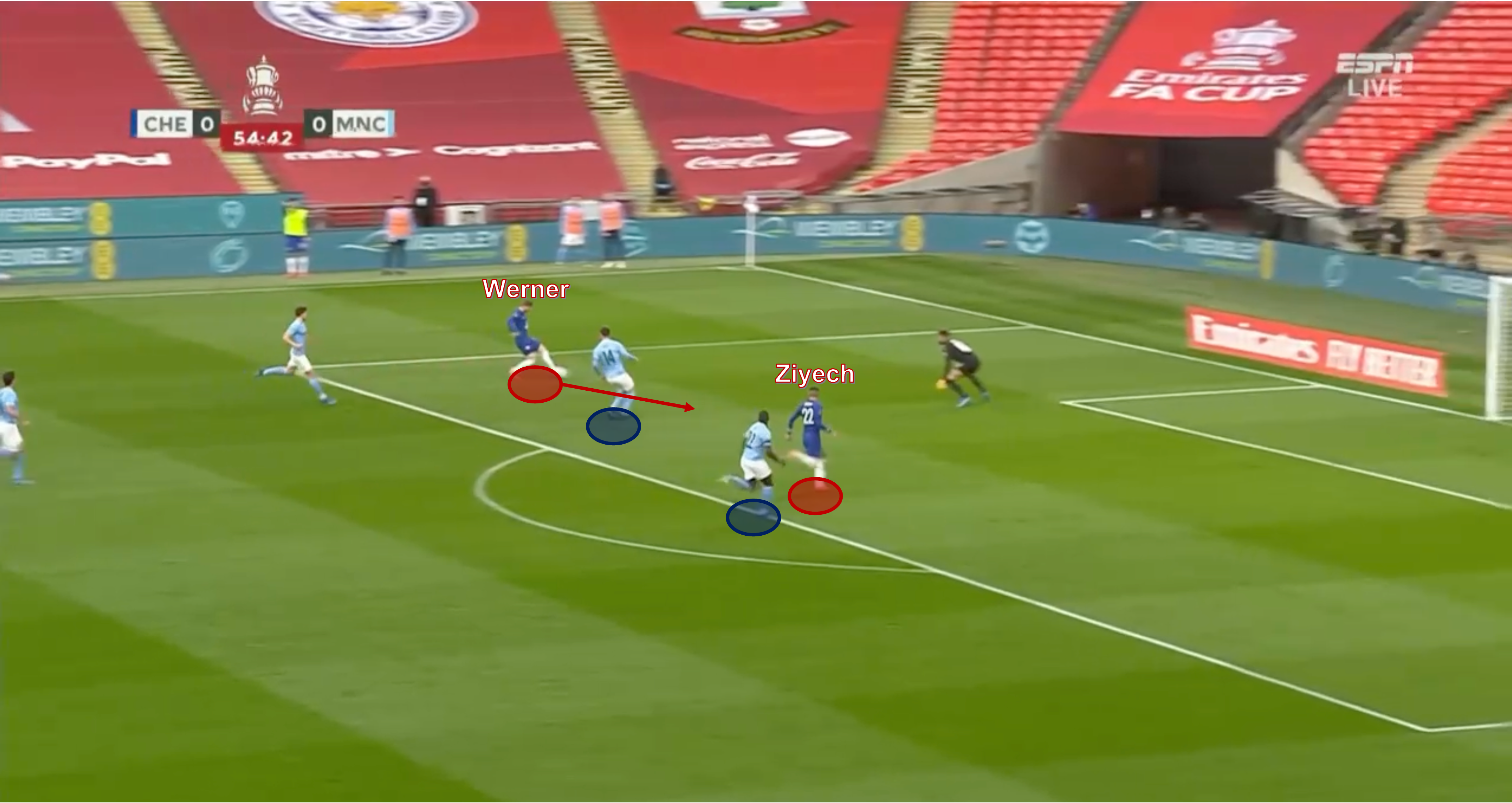 Werner has the ball inside the City penalty area, where he passes it across for Ziyech to score.

In two games in the FA Cup and Premier League against City, Werner has started as a #9 in the same 3-4-2-1 system and registered two assists in those games – games with only a one-goal winning margin. In the UCL final, Werner also played a big part in Chelsea’s victory with his good work off the ball, and he even could have scored a couple for himself in the final, if it were not for better finishing.

His first goal of the season – and first goal for Chelsea since May – came via a fabulous Reece James delivery that the German met with his head and gliding past Jed Steer in goal. Although it was a fantastic cross, the fact Werner was there in the first place was a good sight to see, and he repeated that availability a couple of minutes later, but this time with a customary miss we have so gotten used to in Chelsea colours. 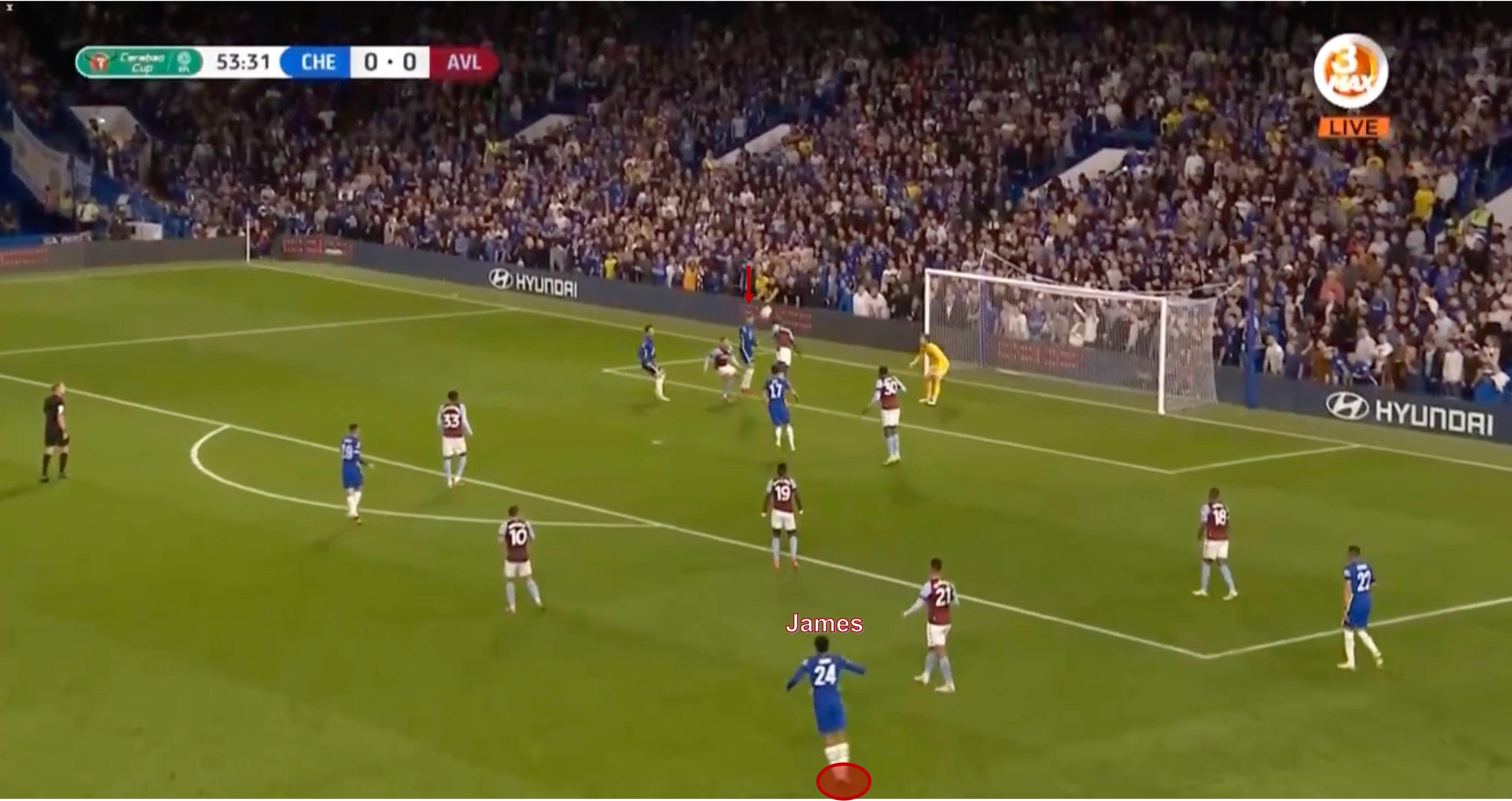 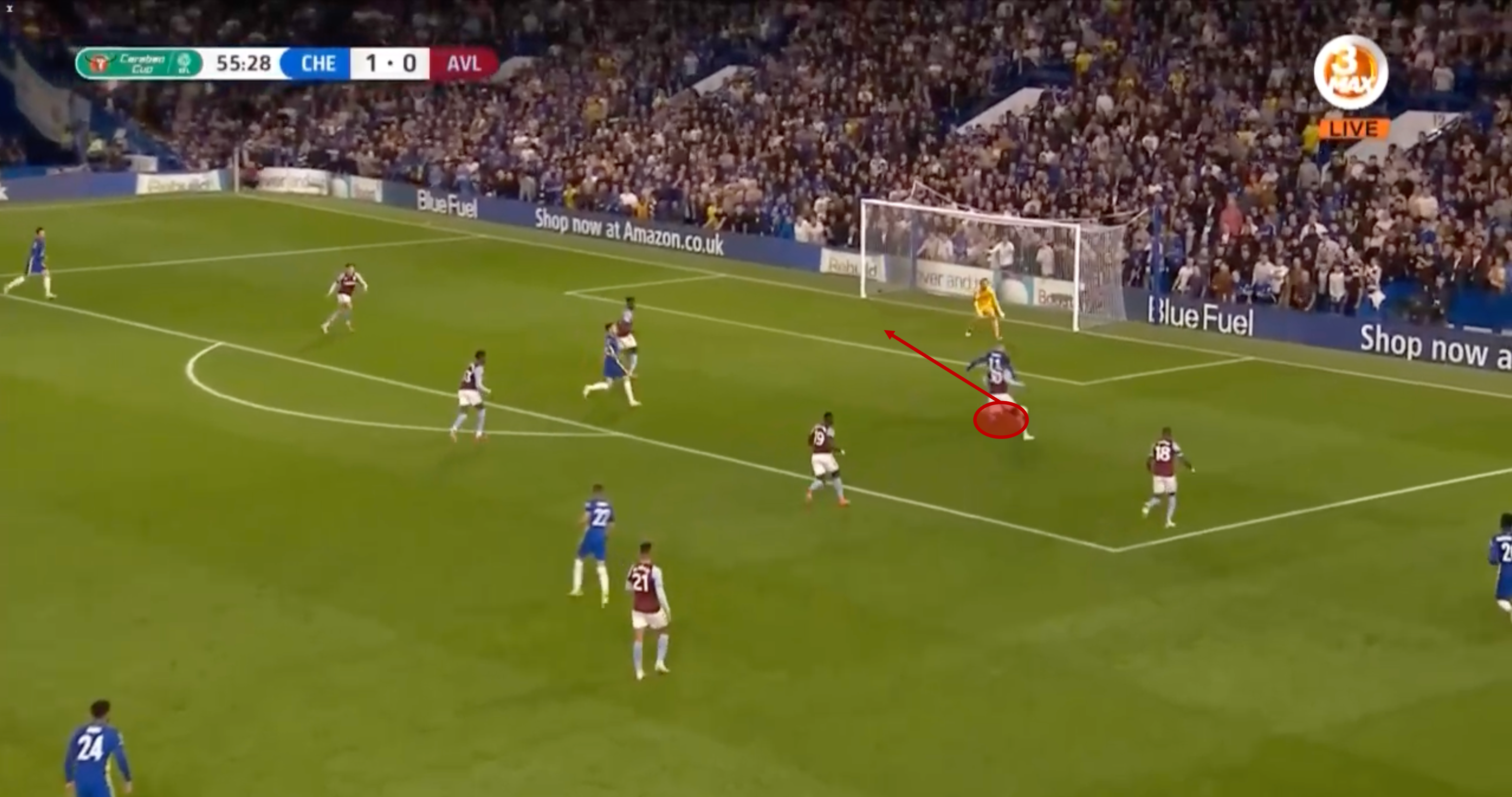 More befitting of his usual finishing – Werner misses to the left from here.

There is potential for Werner and Lukaku to strike up a partnership similar to Werner and Yussuf Poulsen did at Leipzig – a time when Werner was scoring goals for fun in the Bundesliga. Lukaku, like Poulsen, draws attention whenever he collects the ball – someone with so much size and strength usually requires a couple of markers to regain possession in dangerous areas. This creates space for a player such as Werner to shoot or pass, and this is something we saw immediately with Mount and Havertz in Lukaku’s debut vs Arsenal. 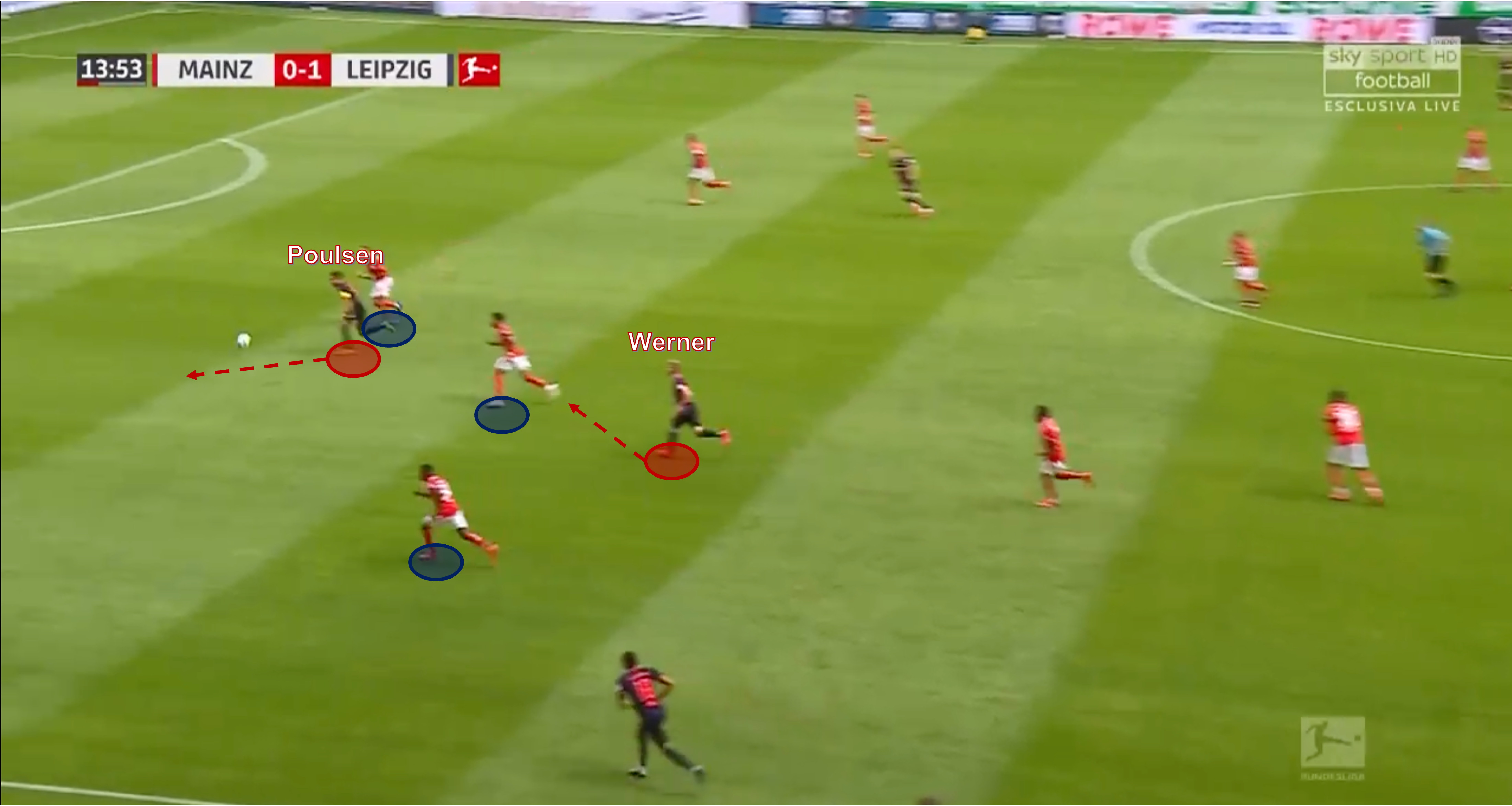 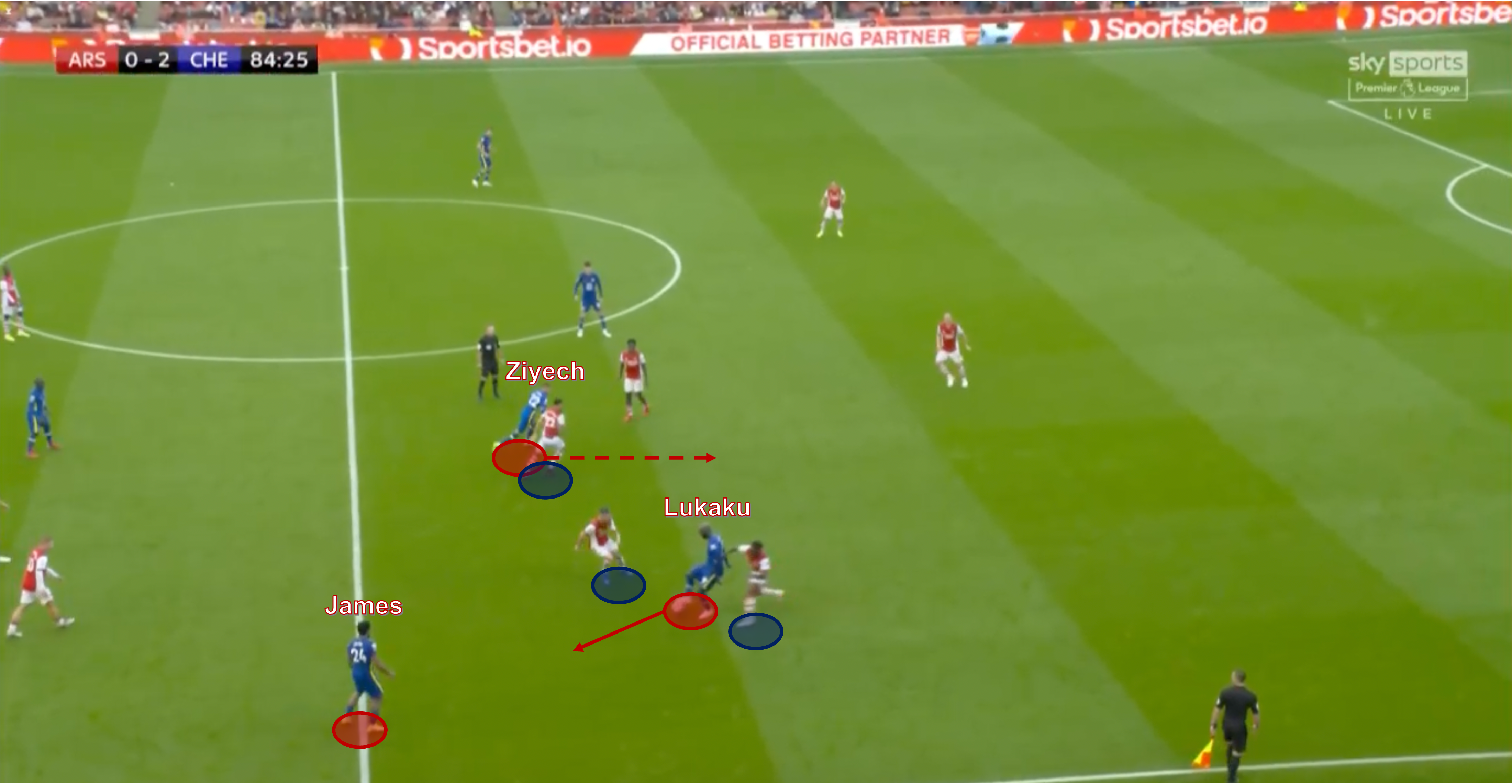 Lukaku holds up the ball here, with Ziyech running in behind and James ready to the ball to find him with a through pass.

At this moment in time, that relationship is not quite there going forward, but there is hope for something better, and hope for something different in this Chelsea attack. If there is anything to be slightly cautious about the Blues this season, it is still some of their attacking displays. They can occasionally struggle to break down teams, for example, Spurs in the first half of the North London derby, so to have a different setup to choose going forward will be a huge benefit.

Despite a good game for the front three versus Arsenal on Lukaku’s debut, Mount and Havertz have failed to reach those levels since. Mount in recent weeks has been going through a particularly testy period – but such has been his consistency for nearly two years, he was bound to have a dip in form at some stage. Thankfully, despite some of these issues, Chelsea continue to win games and often win them comfortably.

Up against City, Southampton were superb. For a side who are prone to a few drubbings at the hands of top-six sides, the Saints made sure that their high press was utilised in their favour, rather than leaving acres of space in behind to be hit on the transition by fast attacking players. Nay, Ralph Hasenhüttl’s men employed a constant press that Aké and Dias could not handle – and with Chelsea looking likely to face the same centre-back partnership, Tuchel ought to take some pointers from his Austrian counterpart.

It is a blueprint that seems like Tuchel set for Hasenhüttl himself – concede possession and hit City on the break, and fast. Last season, Chelsea went from beating Crystal Palace in the league with 64% possession, to winning versus City in the FA Cup semi-final, with only 45% possession, then beating them in the UCL final with only 40% of the ball. Game state had a big part to play in that final possession figure, but still, Tuchel is happy to be flexible with his approach to keeping the ball against big teams like City, and he should continue to do so. 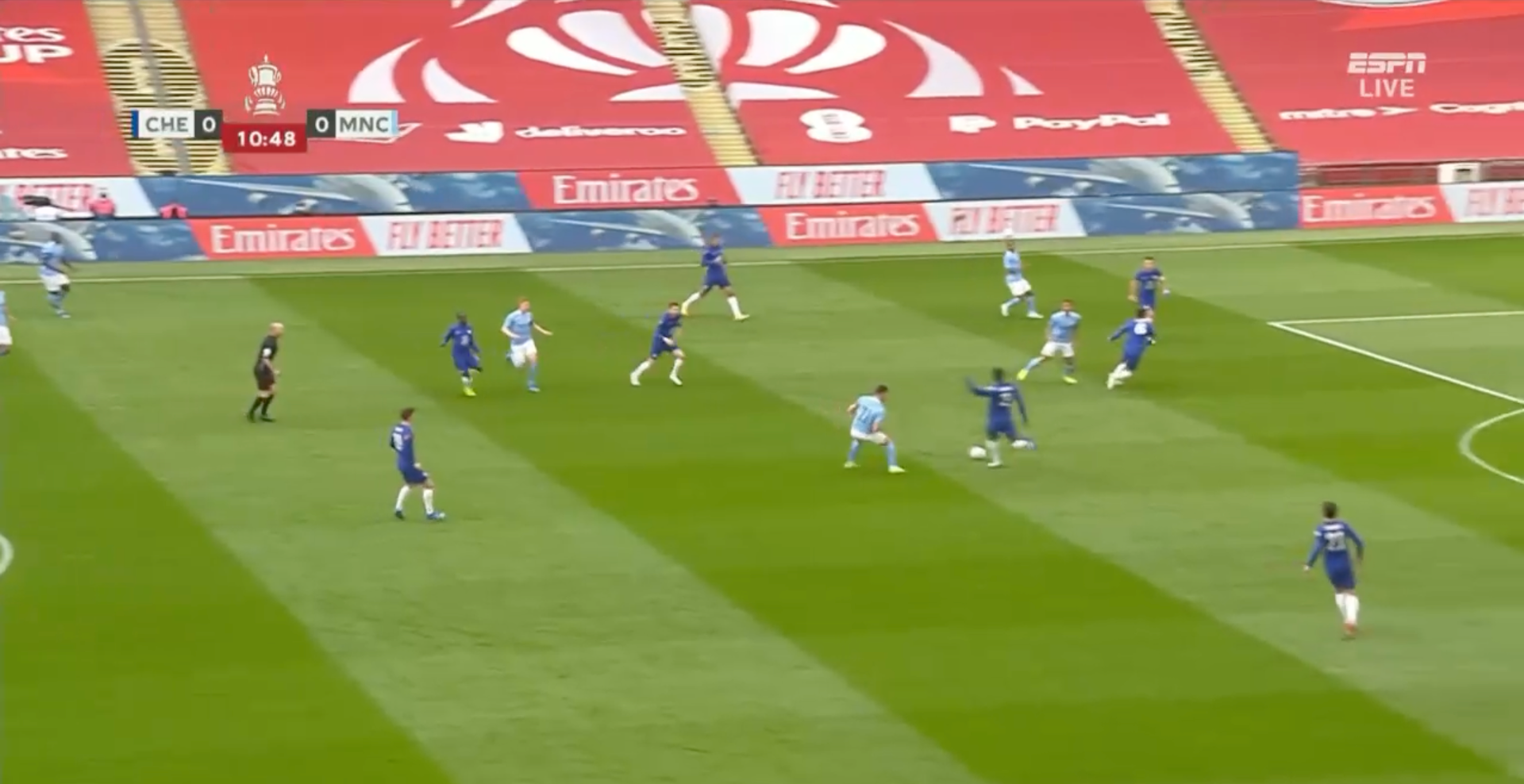 Rüdiger here cuts out a pass deep inside Chelsea’s half.

Chelsea’s best performance under Tuchel came against Real Madrid in the second-leg, where they had only 34% of the ball. Unlike Southampton, Tuchel tends to set out his side to win the ball back a bit deeper inside his own half, rather than higher up the pitch like Hasenhüttl. Winning the ball higher up the pitch meant there was less space to exploit in behind, and this was not an issue for Chelsea against Madrid, who created a plethora of high-value chances thanks to this method of chance creation. 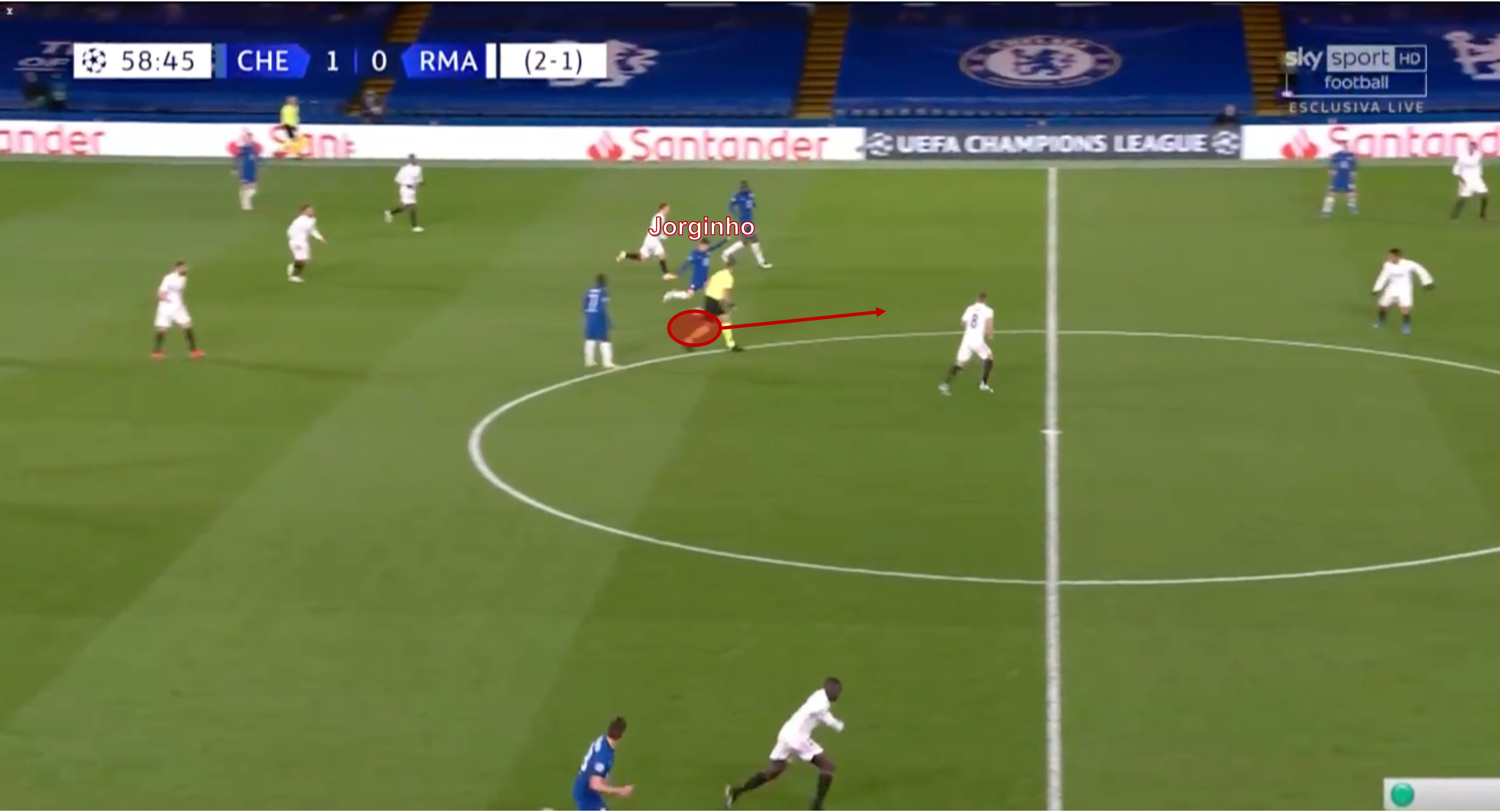 Jorginho collects the ball deep and attempts the direct ball. 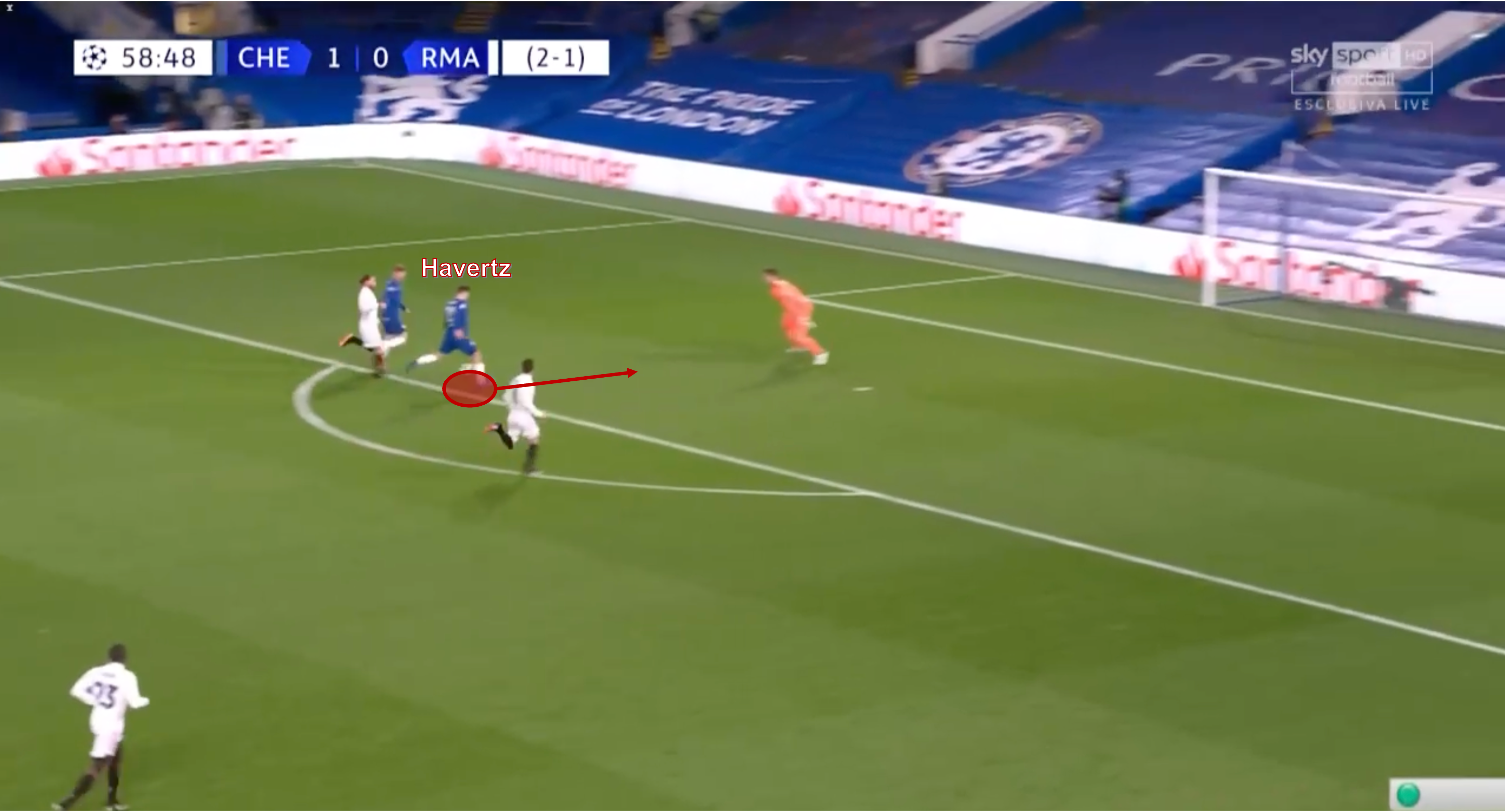 Havertz latches onto the pass, but misses his effort.

If Fernandinho is to start again for City, it must be said that it is to Chelsea’s benefit should they press as aggressively as Southampton did. He was frozen out of the game and just seemed to lag behind the pace of the game, and the aggression of the Southampton pressing unit. Whenever the Brazilian would receive the ball, he would repeatedly be forced to pass down his second or third-choice avenue due to the pressure loaded onto him. 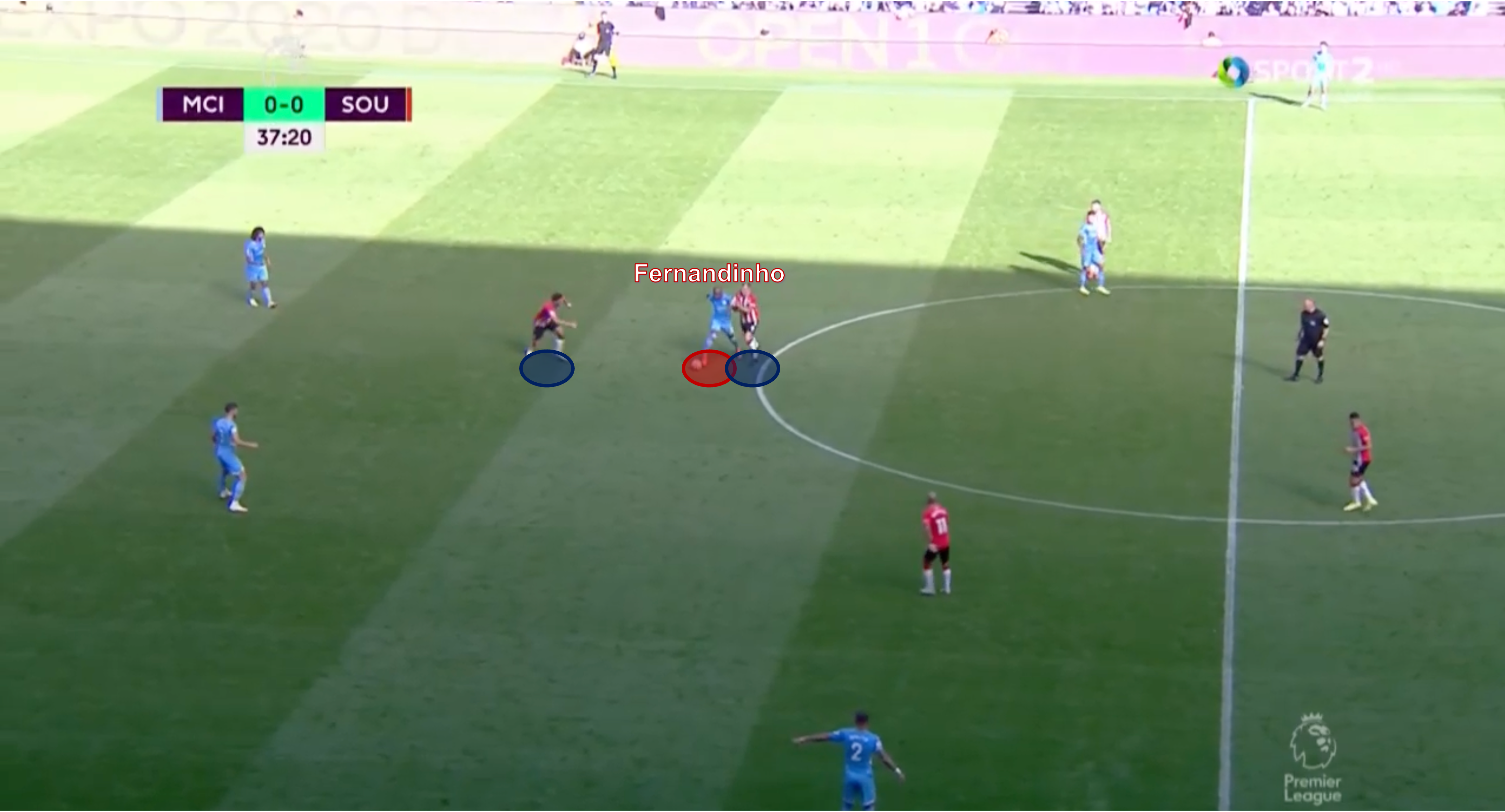 Fernandinho was doubled up on, and forced to pass sideways all game long.

It was much of the same for a lot of City’s players, but it was exacerbated for Fernandinho given his central role in this City midfield. Guardiola’s side were unable to build-up out of defence, and this was a big reason as to why they could not generate chances. City under Guardiola are notoriously patient with their build-up and only technically go long when Ederson spots a runner he thinks he can find with a long ball.

Southampton reduced City to just one shot on target, and if Chelsea are to have similar success, the midfield pivot of Jorginho and Kovačić need to be on top of their game. It is in Jorginho’s nature to win the ball back aggressively under Tuchel, but he does have a tendency to be dribbled past quite often, and with Foden and de Bruyne in midfield, this is a cause for concern somewhat. It might be a good idea to feature Jorginho with someone like Trevoh Chalobah, who has plenty of experience playing as a deeper midfielder, shuttling across and covering for more advanced players. 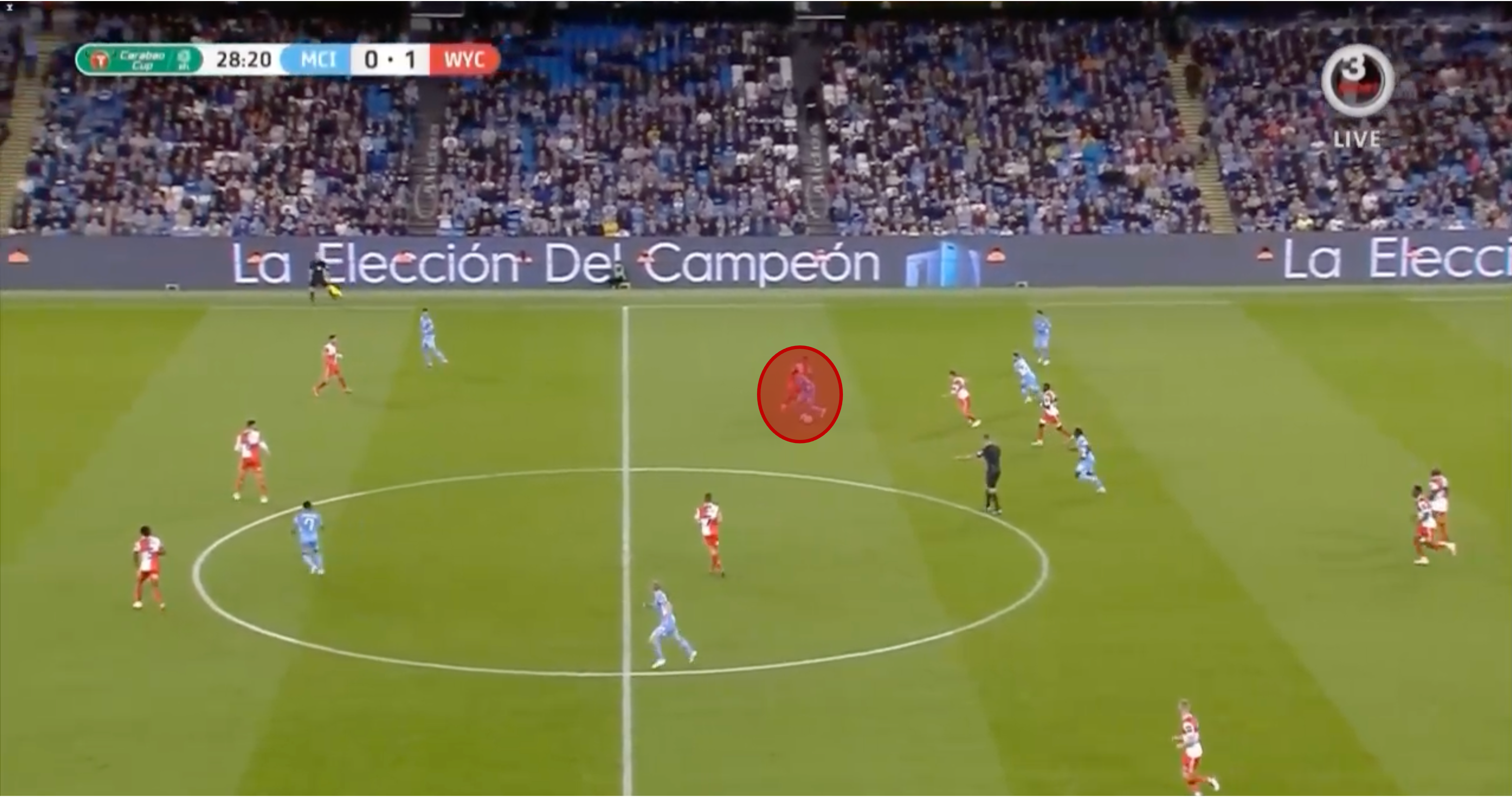 Here, Foden takes it past the Wycombe player easily. 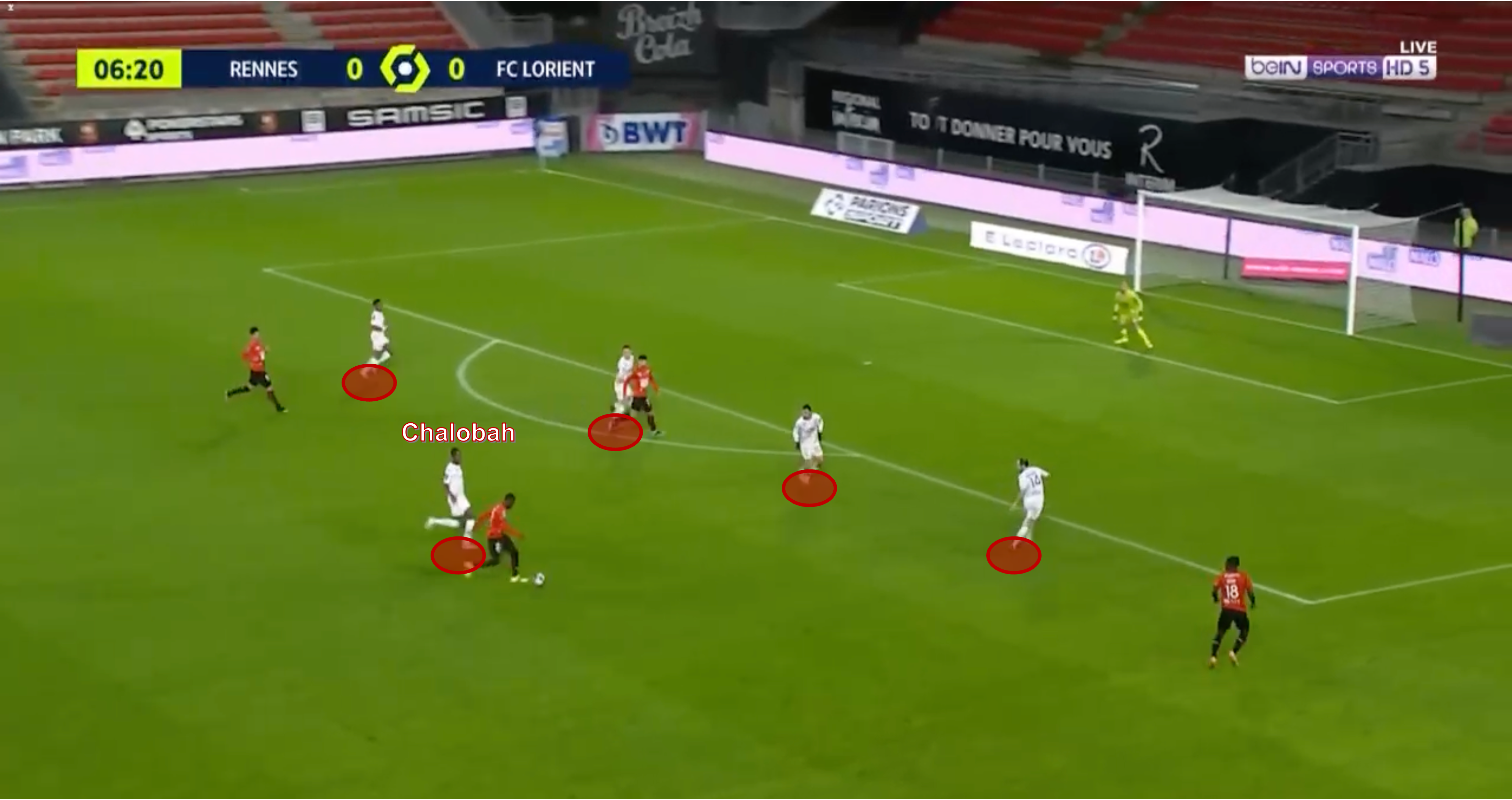 This is just one example of Chalobah as a sole #6 playing for Lorient last term.

If Chelsea follow a plan similar to this, they have a good chance of winning this match or at least nullifying City’s attack to where they can gain a draw. Although, if Havertz does start again, his work off the ball reaches nowhere near the level of a Mount or Werner, and perhaps this is something that Tuchel should be considering as well. That is said in confidence, despite Havertz scoring *that* goal versus City to crown Chelsea the champions of Europe. Oh, what a wonderful headache to have.

Any big game that features Guardiola is always a tough one to call. He tends to spring a surprise selection, and in the last matchup between the two sides, it was having Gündoğan as a sole #6 which many will claim directly led to the goal that Havertz scored in that final. He has to break Tuchel’s curse over him at some point, why not now? Although, if I was a betting man, I’d go for 2-1 to Tuchel’s men.