The USWNT met Paraguay at TQL Stadium and this match was the second of two friendly games between the two, the first ended with a 9-0 and the second with an 8-0 win both for the USWNT. Therefore, the two games were open for the locals to practise their new ideas and further enhance the chemistry between the players especially from an attacking perspective.

In this tactical analysis, the focus will be mainly on USWNT’s attacking diversity and the way with which they dominated the game from beginning to end. Moreover, an analysis of the attacking combinations and the remarkable individual performances will be provided. These individual differences between the two teams created a lot of difference as USWNT players’ experience in NWSL, FAWSL and especially in playing against top European teams like Chelsea, Bayern Munich, Barcelona and others, allowed them to acquire extra tactical ideas and develop their skills even further.

The USWNT started the game according to the 4-3-3 formation relying on Jane Campbell as a goalkeeper, Emily Sonnett, former Manchester City’s Abby Dahlkemper, Tierna Davidson and Casey Krueger in defence, Andi Sullivan, Rose Lavelle and Catarina Macario in midfield while both Mallory Pugh and Sophia Smith played on the wings to help the striker, Alex Morgan.

On the other side, Paraguay used the 4-1-4-1 formation with Alicia Bobadilla as a goalkeeper, María Martínez, Lorena Alonso, Tania Riso and Limpia Fretes in defence, Deisy Ojeda as a defensive midfielder alongside Fany Gauto and Fanny Godoy as central midfielders with Fabiola Sandoval and Daysy Bareiro as wingers behind the team’s striker, Liz Peña. 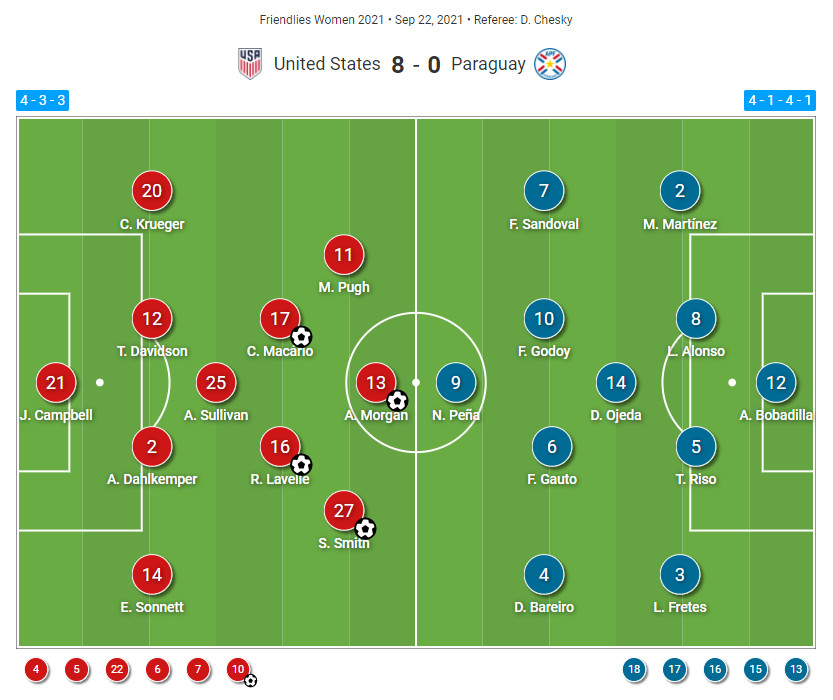 The USWNT dominated this game from beginning to end like they did against the same team a few days ago, making the two games look like training sessions in which the USWNT experimented with different things, especially from an attacking perspective. USWNT’s players were very dynamic during this game and reached Paraguay’s goal eight times without counting the missed chances. What explains this domination even further is their 74,5% in possession, meaning that Paraguay weren’t able to even create chances or advance with well-built attacks.

Paraguay’s problems started early and since USWNT’s first goal at the third minute when Macario was attentive enough to notice Lavelle’s movement inside the box and provide her with an excellent cross. And given Paraguay’s defender’s poor marking, Lavelle was able to score a goal with a powerful header since she found no resistance from her marker. 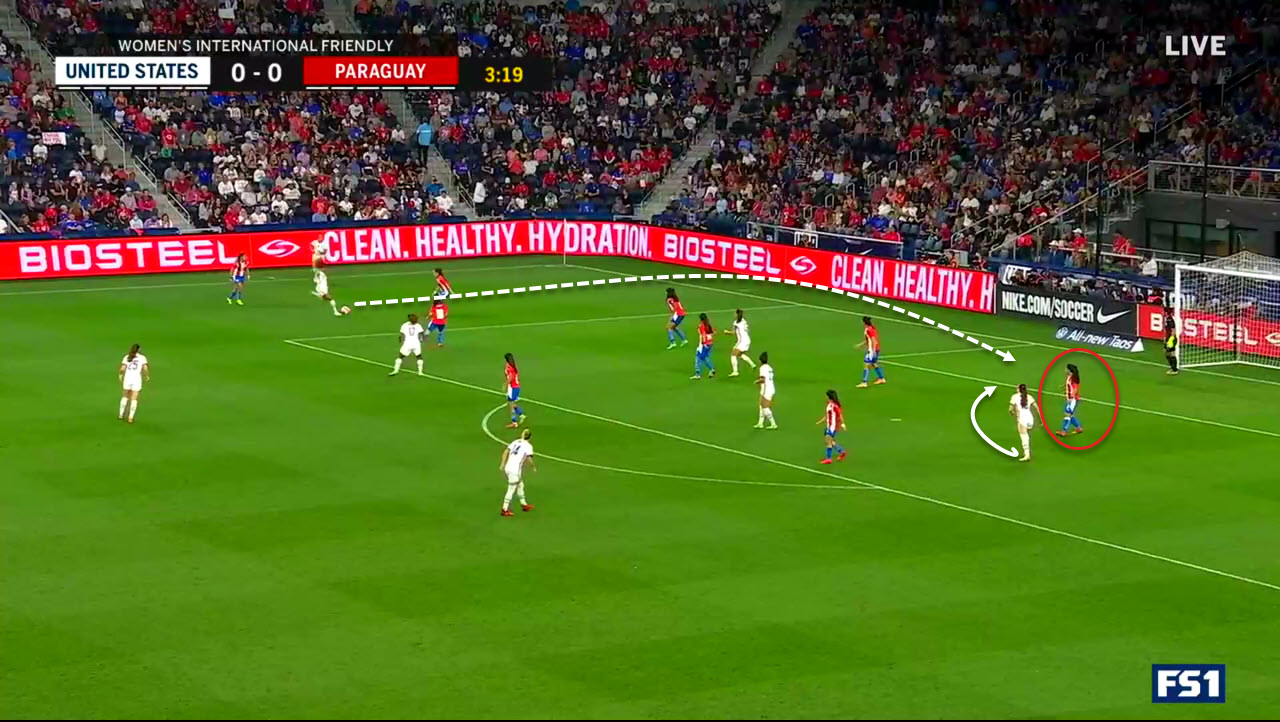 Then, Paraguay’s defensive problems continued and Lavelle’s dynamism inside the final third created a lot of difference for the local team. She was at the heart of almost all USWNT’s actions as she provided an excellent assist for the second goal. She received a pass while running and didn’t stop while noticing Smith’s acceleration on the right-wing and giving her a through pass that was distant from her. Yet, Smith’s experience and agility allowed her to cut inside without the ball, protect it with her body before the defender reach and shoot towards the net scoring the team’s second goal in just five minutes. 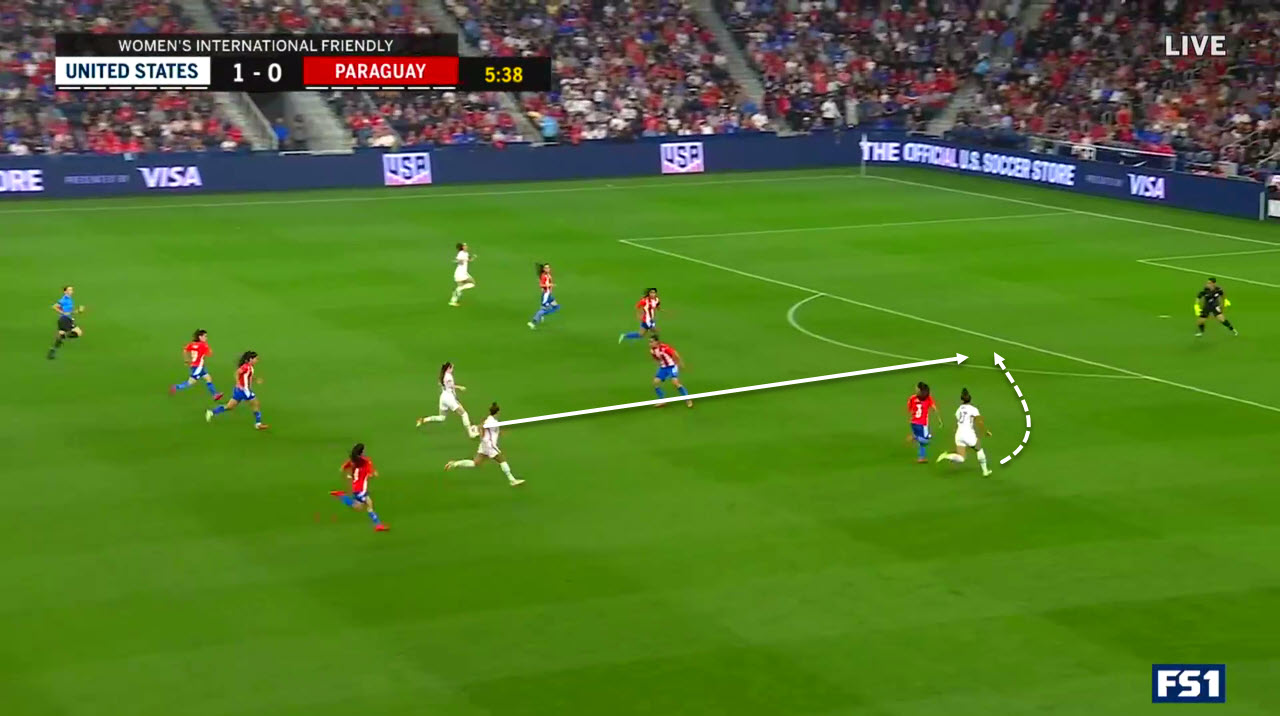 The USWNT shot 27 times on goal with 14 shots on target while Paraguay only shot twice with just one shot on target. This resumes what happened in this match and shows how dominant the USWNT were in attack despite securing the game early. Playing with the same determination for the whole game despite knowing that they are already winning the game highlights the winning mentality of this team. Lavelle was once again the creator of the third goal action as she gave an excellent assist to Alex Morgan with an accurate cross in her direction while making sure that the timing is adequate to guarantee a correct positioning at the start of the action. Then, once again Paraguay’s defensive marking in such situations was not up to the standards as the two defenders marking Morgan left her alone inside the box as soon as the cross was launched. 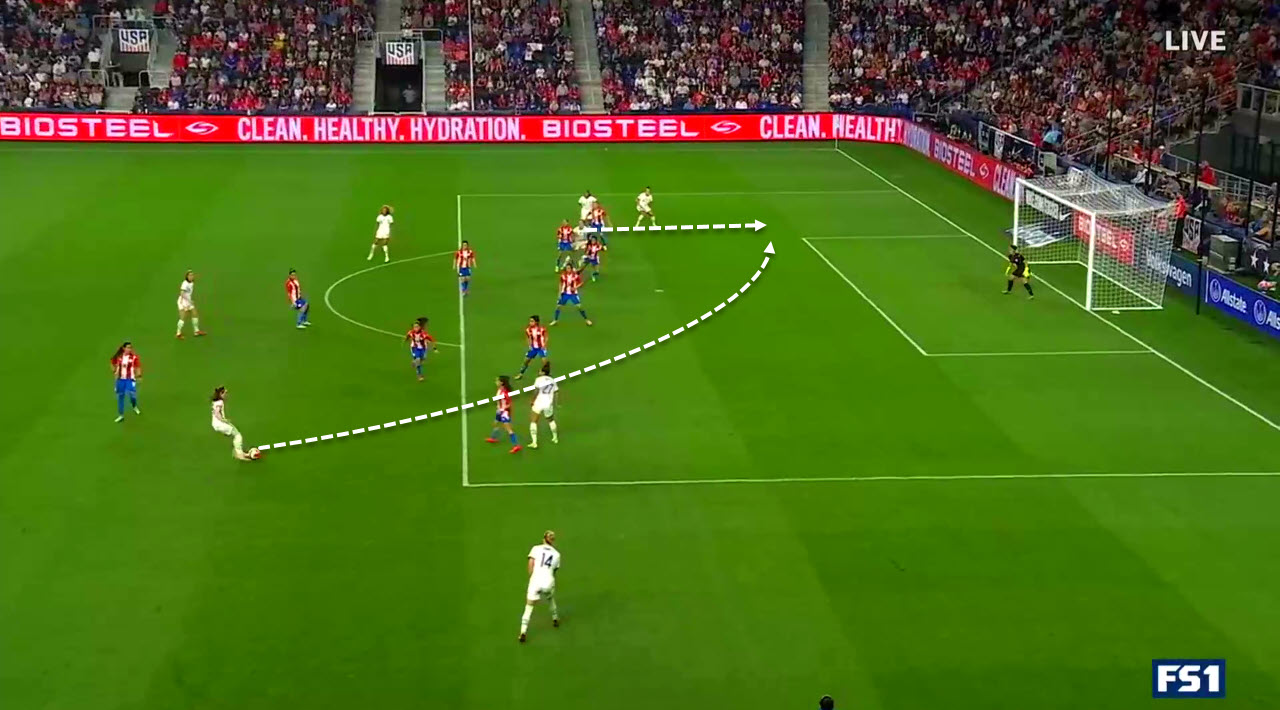 Alex Morgan then continued her goalscoring efficiency by scoring the fourth goal following a clearing mistake from Paraguay players inside the box, a mistake that cost them another goal in just one half. Macario then added another goal just a minute after with an excellent shot that confused Bobadilla and went inside the net. In fact, the USWNT scored from crosses, individual penetrations inside the box, and through passes behind the defence that were exploited by either Smith or Morgan. All these were just the first-half goals. But following the five scored goals, Paraguay were a bit more compact at the back and USWNT were not able to add other goals at the end of this half.

The second half started with the same marking errors from Paraguay defenders as well as the same finishing success for Morgan. This time, however, the assist came from Smith following a great run on the right-wing and a well-timed cross towards Morgan who anticipated the cross with a forward movement to be in front of Alonso and kick the ball towards the net. Bobadilla wasn’t able to make a quick reaction too since she was surprised with Morgan’s shot and Alonso’s inability to stop her. 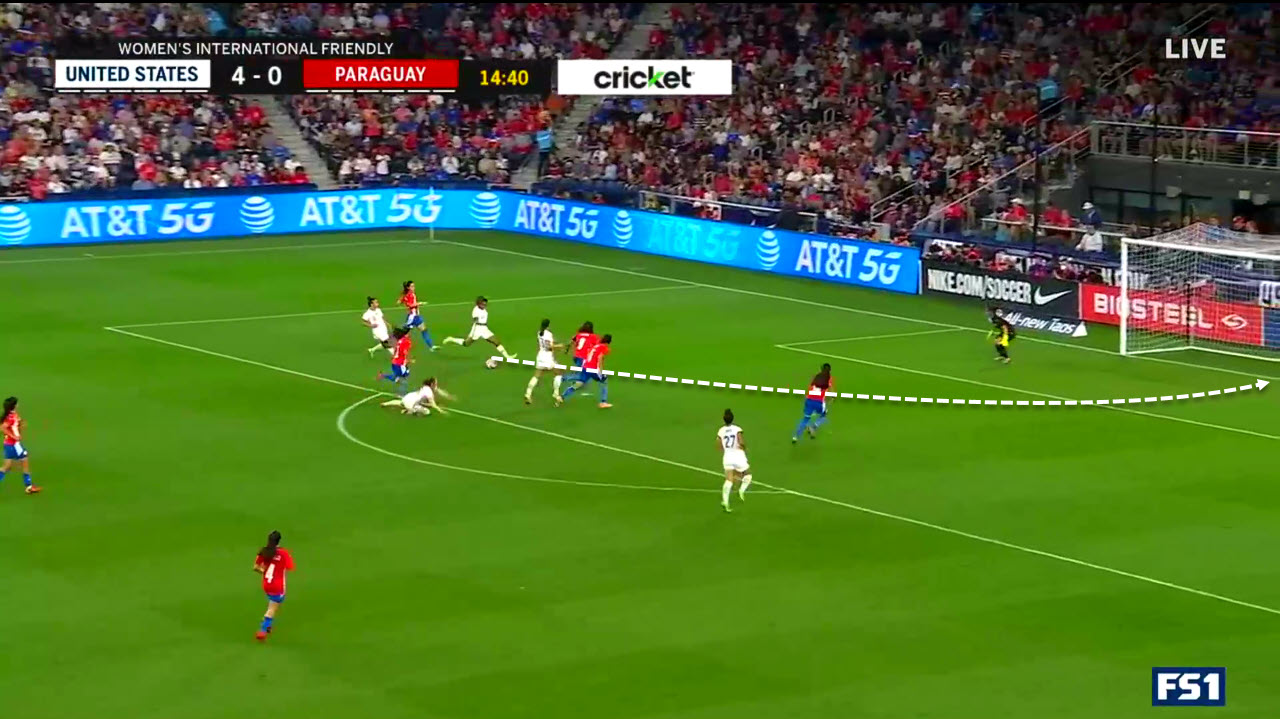 Paraguay were then able to resist USWNT’s attacks and did their best to keep the score like that and they were able to do so until the 77th minute when they committed another mistake. In fact, following a close free-kick, Bobadilla cleared the ball in a wrong way that allowed Lloyd to exploit the mistake, collect the ball and shoot it quickly towards the net, making it one of her last goals before retirement. 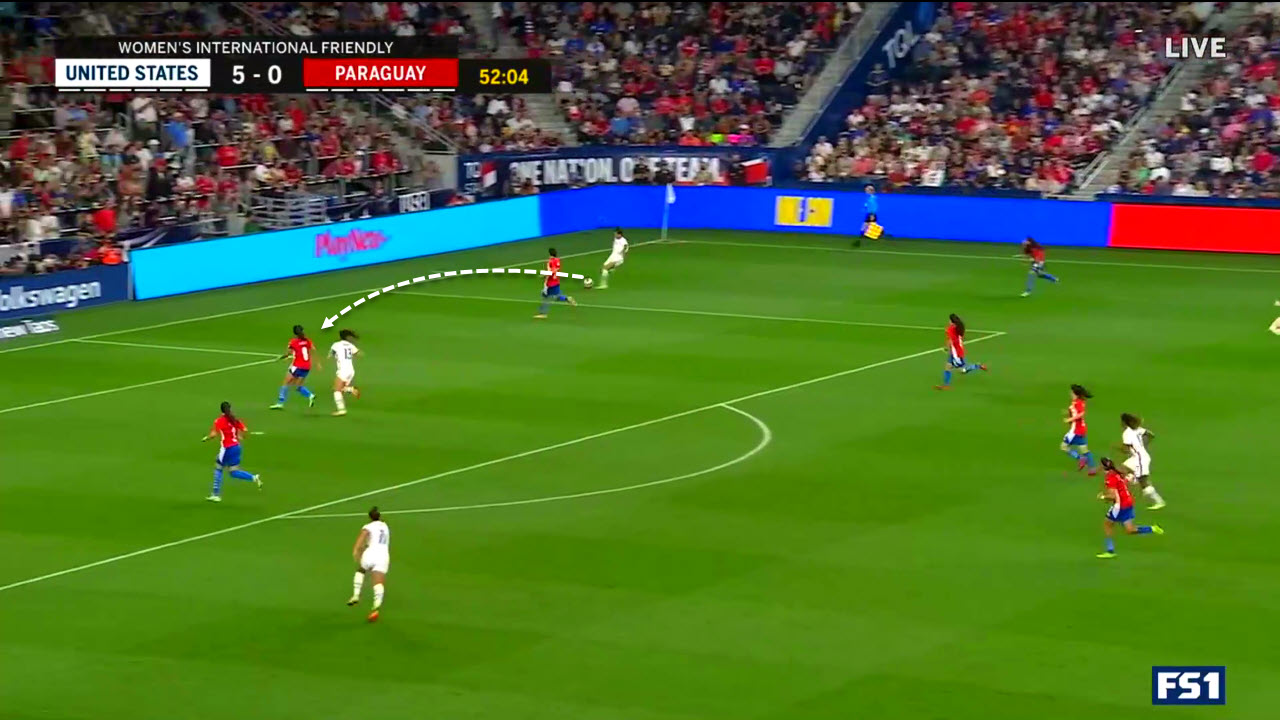 Bobadilla once again offered the chance for USWNT’s players to score an eighth goal by clearing Christie Mewis’s cross in a completely wrong way, making it fall in the middle just in front of Macario who was aware of this and coordinated her body perfectly to execute a beautiful half-volley and score one of the best goals of this match like you can see below. 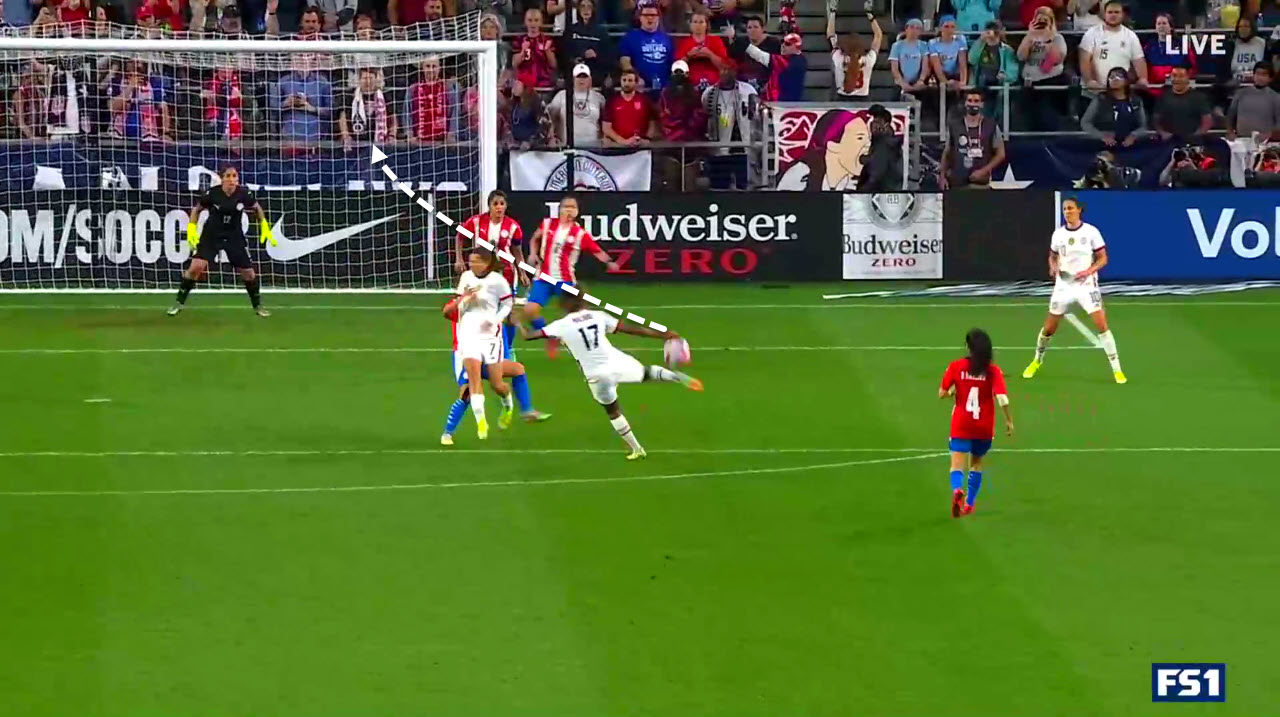 This match highlighted USWNT’s attacking efficiency and was like a demonstration of what these players can do from an attacking perspective but they were not tested in terms of defence. That’s why playing against tougher teams would be more beneficial for the team and the head coach to identify the team’s weaknesses even further and fix what can be fixed ahead of big tournaments because at the end, that’s the objective of friendly games.

For Paraguay, these players should learn from their mistakes and try to improve their defensive performances while taking into consideration that they faced a much tougher team, therefore, they shouldn’t be discouraged.