At the end of round 31, Real Madrid controls its destiny to the La Liga crown, but it’s round 32 opponent, Espanyol, sits at the opposite end of the table. It’s a battle of first and worst.

For the hosts, each passing fixture puts them closer to the Segunda Liga. A positive restart was followed by poor performances, and losses, against Levante and Real Betis. Meanwhile, Madrid is yet to drop a point, outscoring their opponents by a total of eight goals.

In this tactical analysis, we will look at the key to this matchup. Espanyol will sit back and counter, but we will breakdown their counterattack, showing a common pattern that they will use against Madrid. Knowing that Espanyol will settle on this form of attack, an analysis of Real’s response will follow, as will a key component of their in-possession tactics. 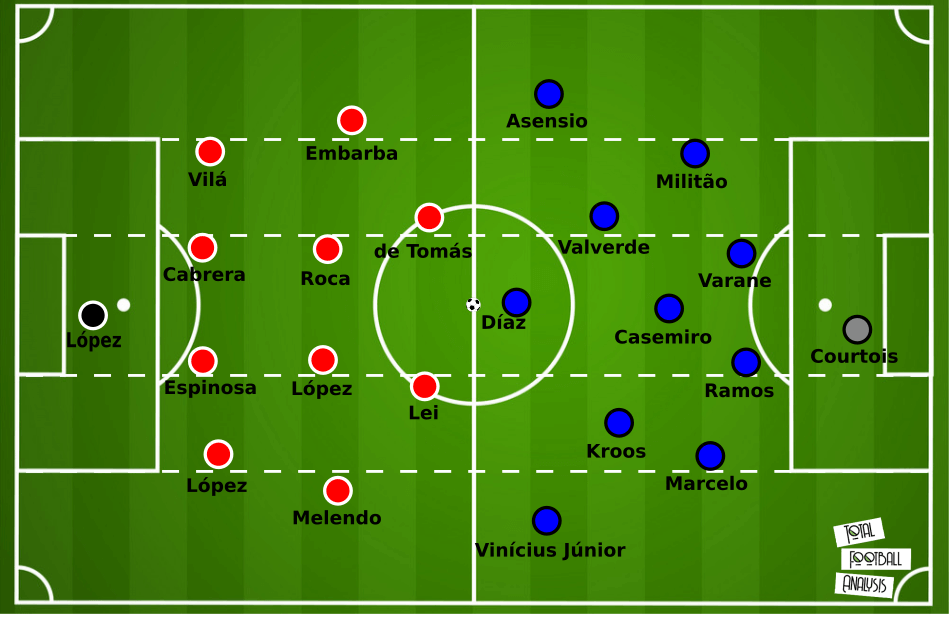 Both sides will rotate from the previous match. Look for Espanyol to field one of their strongest lineups while Real Madrid sees this as an opportunity to rest a few key players. For Los Blancos, Ferland Mendy and Luka Modrić miss the match due to suspension.

Espanyol will counterattack through the half spaces, but settle for crosses

Espanyol isn’t coming into this matchup in good attacking form. Over the past three matches, they’ve recorded an average of 0.84 xG per match, whereas Real Madrid has a 0.51 xGA per game over that same timeframe. Creativity is almost totally absent as Abelardo Fernández’s side has taken a very pragmatic, direct approach in recent matches.

The absence of RDT up top has also slowed the Espanyol attack. His ability to drop into the midfield and offer a creative outlet, much like Karim Benzema, has stifled this attack. He should be fit enough to start, but lack of form against Europe’s top defensive side surely won’t help matters. That said, if he is able to play, his willingness to drop into the midfield, dragging a centre-back with him, will open up running lanes for his teammates.

Espanyol does struggle to find passes through or over the top to those runners, often recycling possession. When that happens, look for them to unbalance Real Madrid on one side of the pitch. As the Real Madrid defence losses its balance, Espanyol will look for a switch of play. While they aren’t among the league leaders in crosses per 90, they are also one of the lowest-rated attacking teams in La Liga, so those fewer crosses relative to their few final third box entries stack up.

In the image below, we see Espanyol circulating the ball on their left half of the pitch. As Atleticos overcommits, space opens up on the wings and the switch is played. Notice it’s a deep switch to Javi López, the right-back. Lei does his part by staying in the half space, drawing Renan Lodi to a more central starting point. 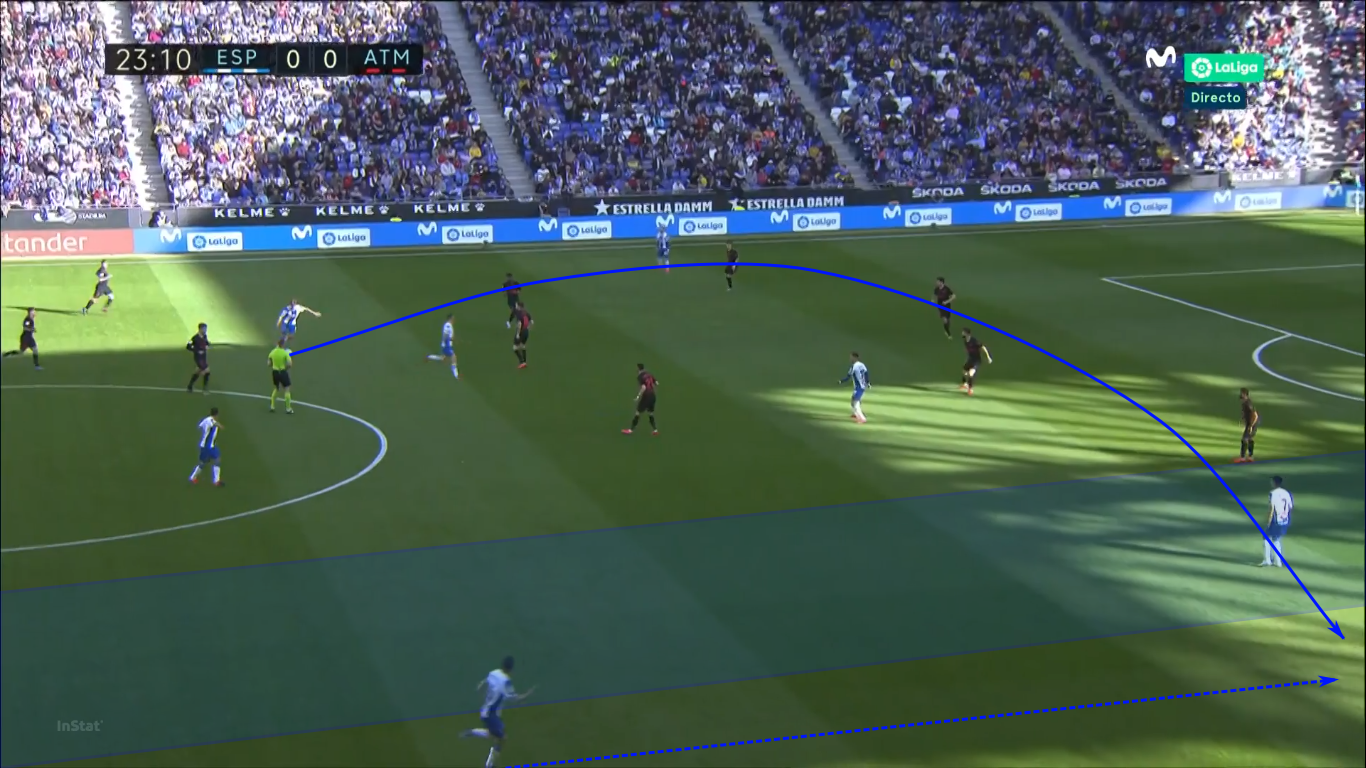 As Lodi goes out to defend against Javi López, the Spaniard passes to Lei in the space behind Lodi. With no coverage for the defender, Lei raced into the box while his teammates prepare their entry. 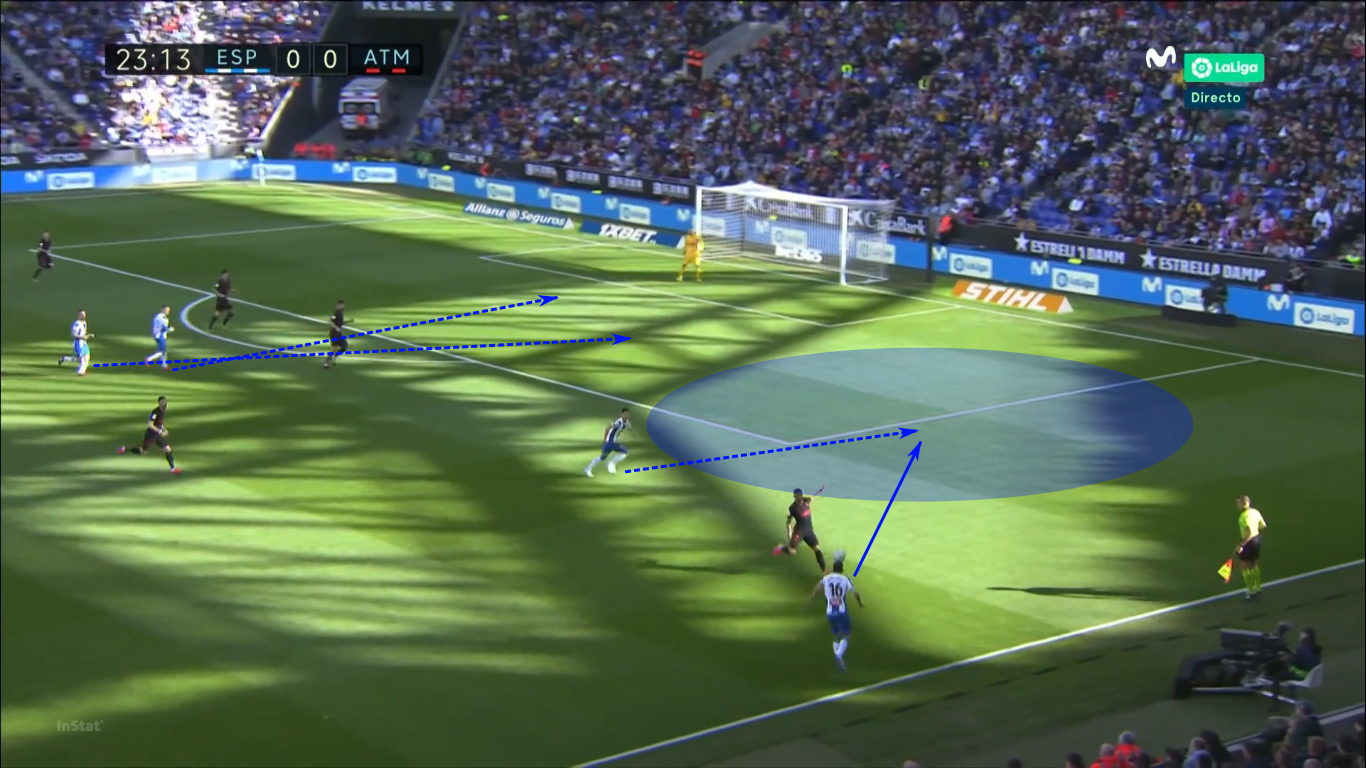 His delivery is a good one, catching the boot of Stefan Savić for an own goal. 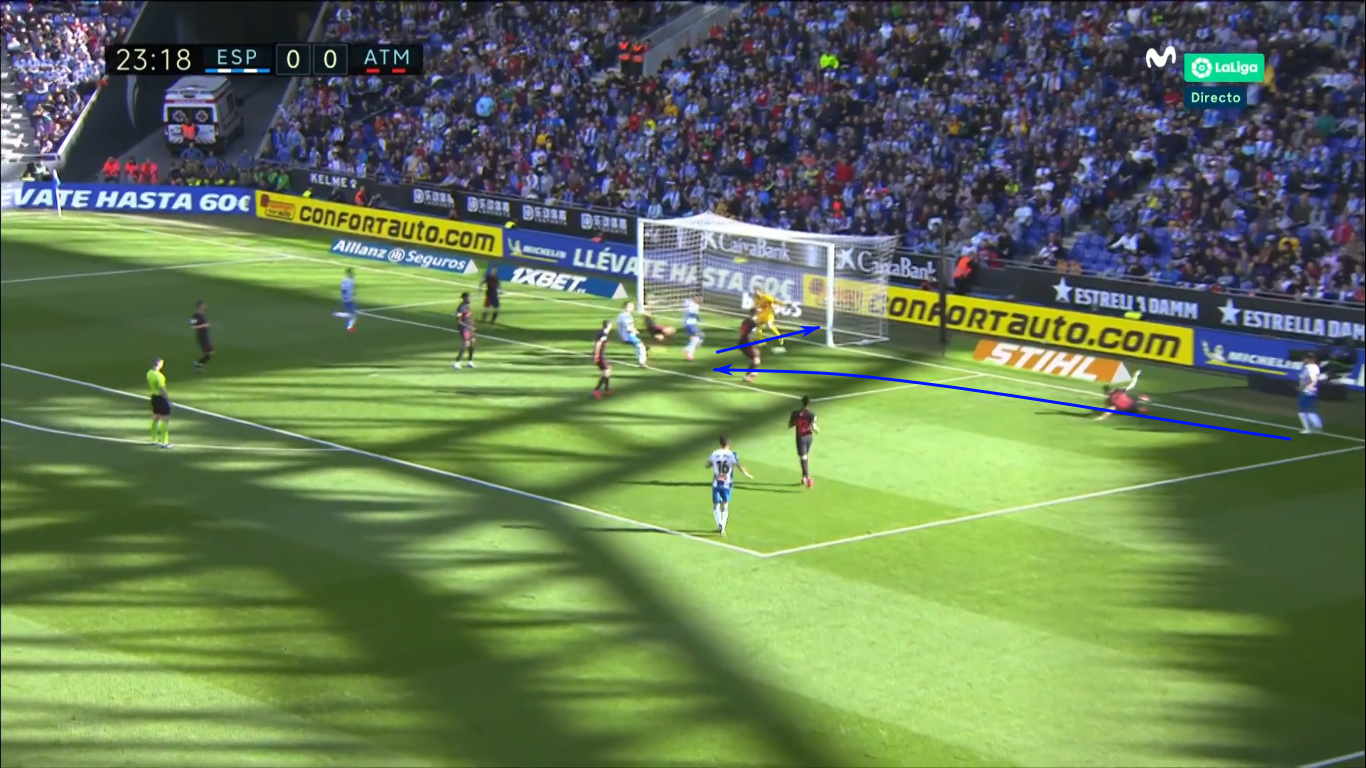 That’s what’s likely to happen in prolonged attacks, but don’t expect Espanyol to have many sustained possessions. A strong rest defence is key in this match, so expect the Periquitos to remain fairly compact and direct in attack.

As they attack, rather than utilising the wings, as is most common in a 4-4-2, watch for them to release the wingers into the half spaces. With their narrow starting points in defence, the wingers will use vertical runs onto the ball. In this example against Atlético Madrid, Lei was released into the wings after a line-breaking pass to the Sergi Darder. 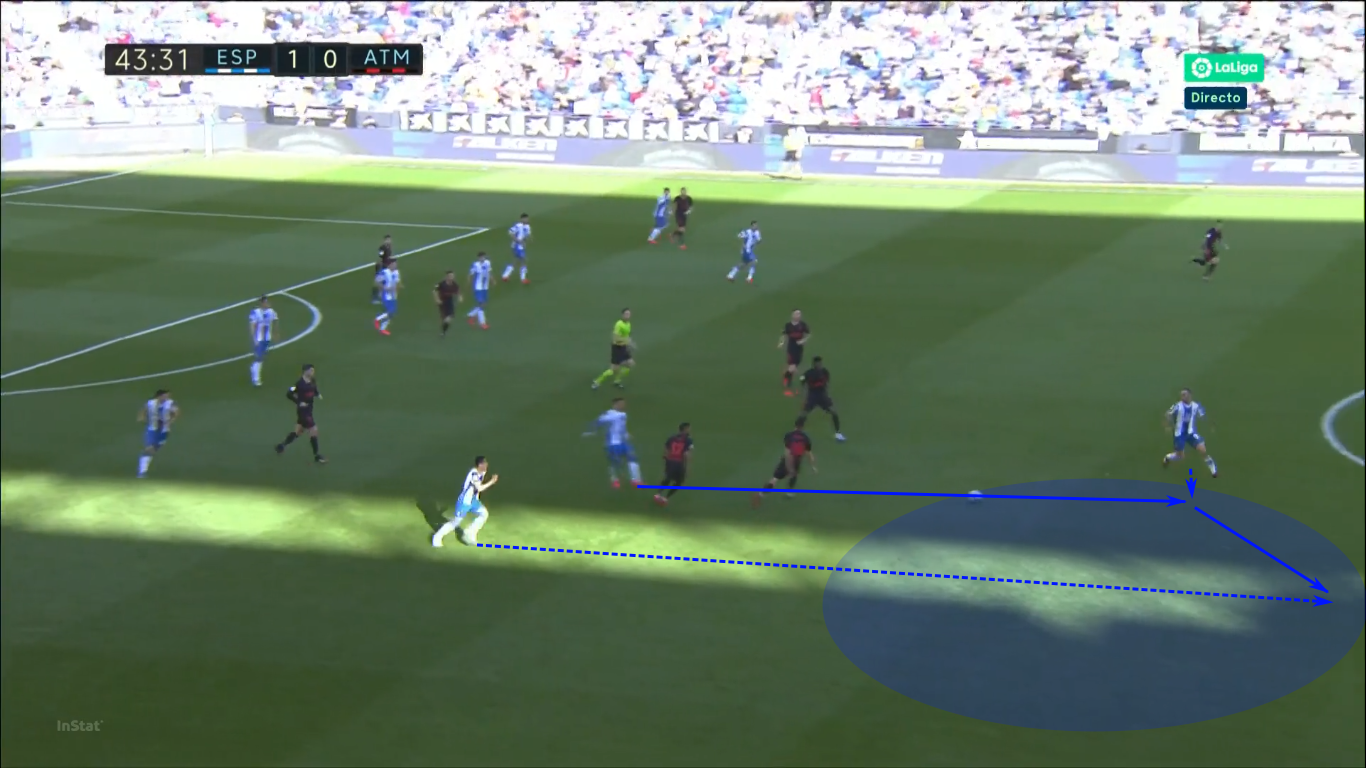 With the Atlético defenders stepping up to apply pressure, space opened up behind them, leaving Lei unopposed well into the opposition half. One issue, which is a common occurrence in Espanyol’s attacks, is that they tend to remain too far wide. In this instance, Lei never cuts inward, allowing the Atlético defender to comfortably run with Darder while his midfield recovered towards Lei. 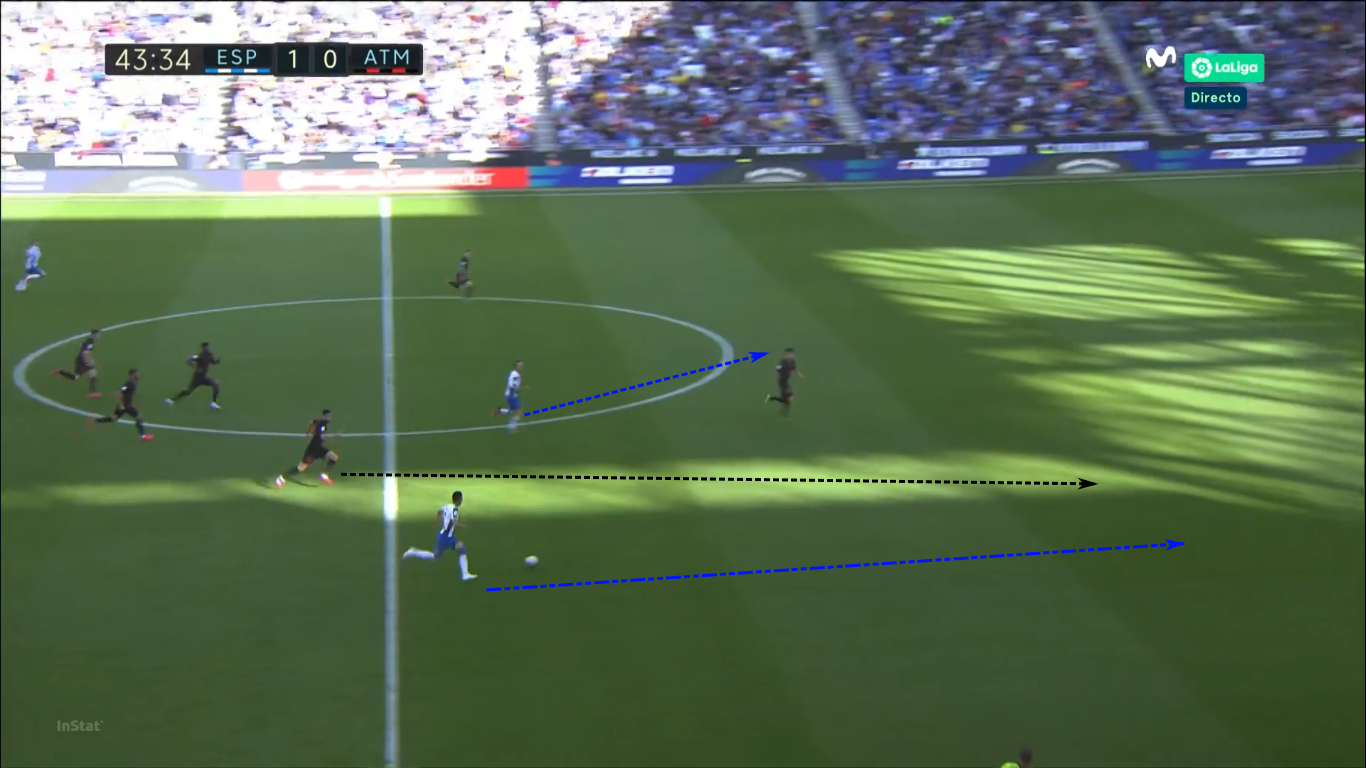 By the time he’s able to send the cross, an Atlético defender catches him, blocking the cross and sending it out for a corner kick. While that’s not the worst outcome, this is certainly a squandered opportunity. The slow, indirect counterattack allows five opponents to enter the box in defence of the cross. 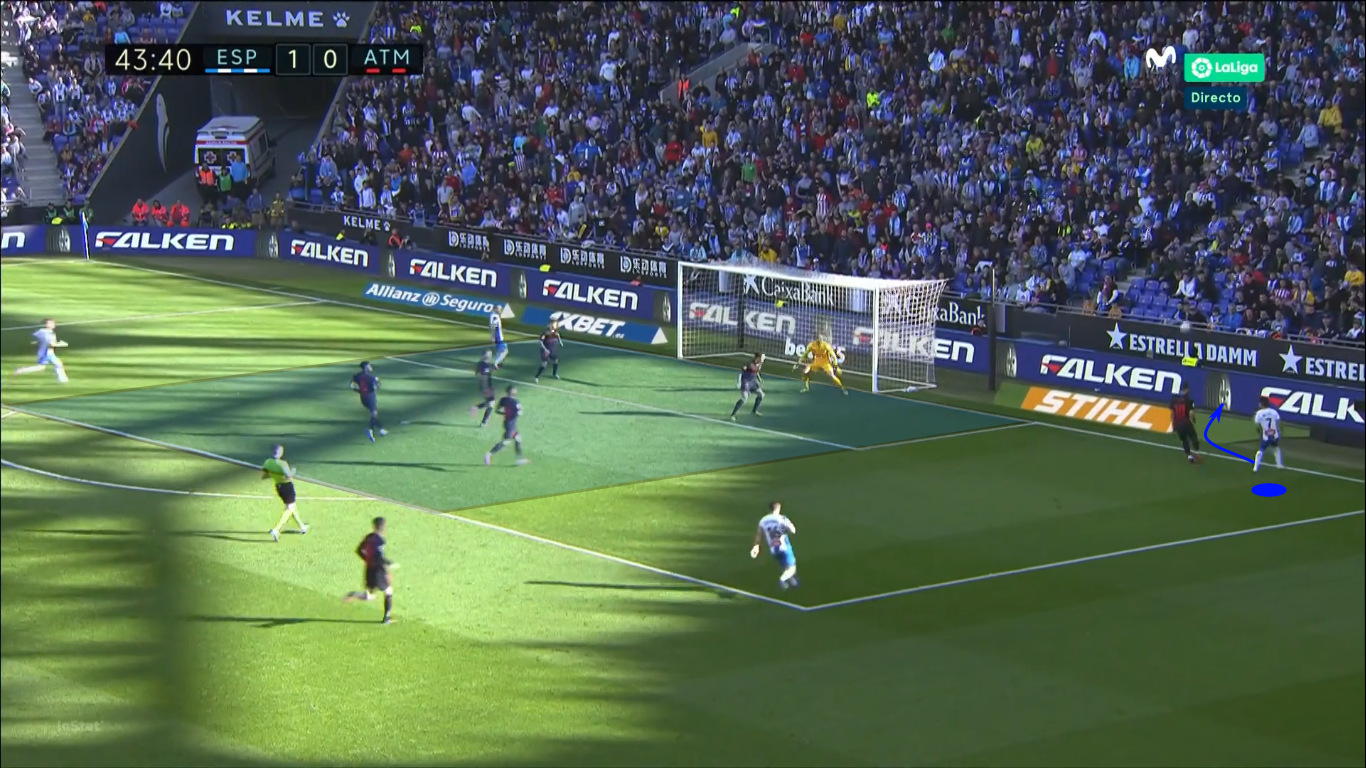 In both examples, Espanyol’s crosses came from the corner of the box. To have success in this match, they’ll have to take advantage of the few opportunities they’re likely to have. More direct runs in the box with fewer hit and hope type crosses will be key.

When Real Madrid counterpress, they aim for one of two outcomes: 1) an immediate recovery or 2) forcing the opposition backwards, delaying the attack and buying themselves time to recover their defensive shape. Against more direct opponents like Espanyol, an immediate recovery the more common objective. As Espanyol look to hit the high targets and send runners in support, the Madridistas will enjoy a numerical and qualitative advantage higher up the pitch. Look for quick recoveries throughout the match. An exception is a scenario in which they provoke Espanyol out of that low block to create some space for the next attack, a ploy Madrid use very well.

Assuming Zinedine Zidane’s men are actively pursuing the recovery, one danger Espanyol must avoid is a quick Real Madrid recover leading into a counterattack of their own. Since Los Blancos send so many players high up the pitch in attack while also implementing a trustworthy rest defence, it’s common to see more direct opponents win the ball in their defensive third, play a high target and rush upfield in support. With the likes of Casemiro, Ramos and Varane at the back, Madrid enjoy a high level of success in putting out the opposition’s counterattacks before they really get going. If a team is too eager to get forward, Madrid will play an early pass to bypass at least one, if not two, of the onrushing lines. This scenario frequently leaves Madrid’s dynamic attackers in numerical equality or superiority.

In the last match, Real Madrid faced a Mallorca side with a comparable talent level in a similarly executed 4-4-2 system. When Madrid’s long attacks ended in the final third, Mallorca were eager to try their luck in on the counterattack. However, Los Blancos were excellent in their counterpressure, securing a goal on the back of a counterpressing recovery. Notice the targets higher up the pitch. All Dani Carvajal has to do is get a touch on the ball. With numbers favouring Madrid, any touch is likely to head to a teammate. 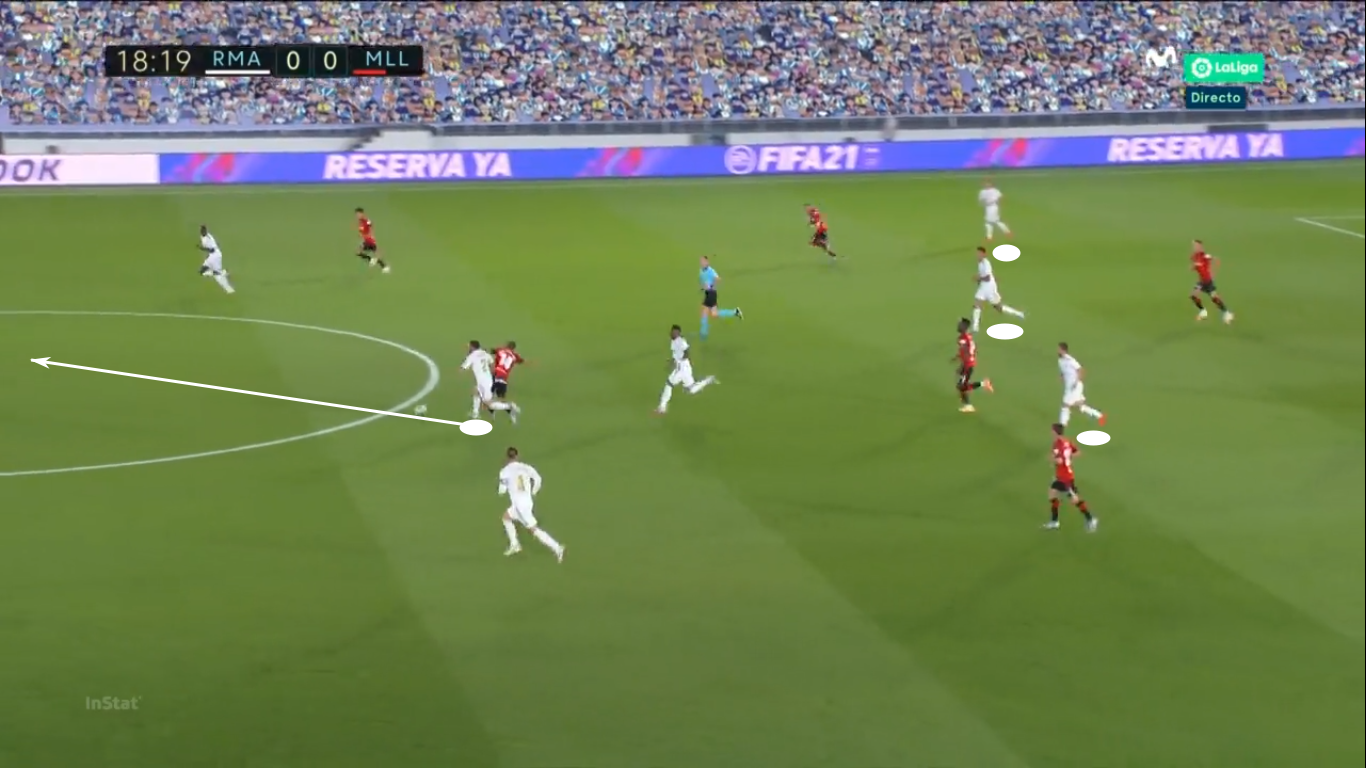 His poke tackle pushed the ball into the path of Valverde. The Uruguayan send a beautiful chip into the path of Modrić. Notice that every Mallorca player is either running or facing forward. 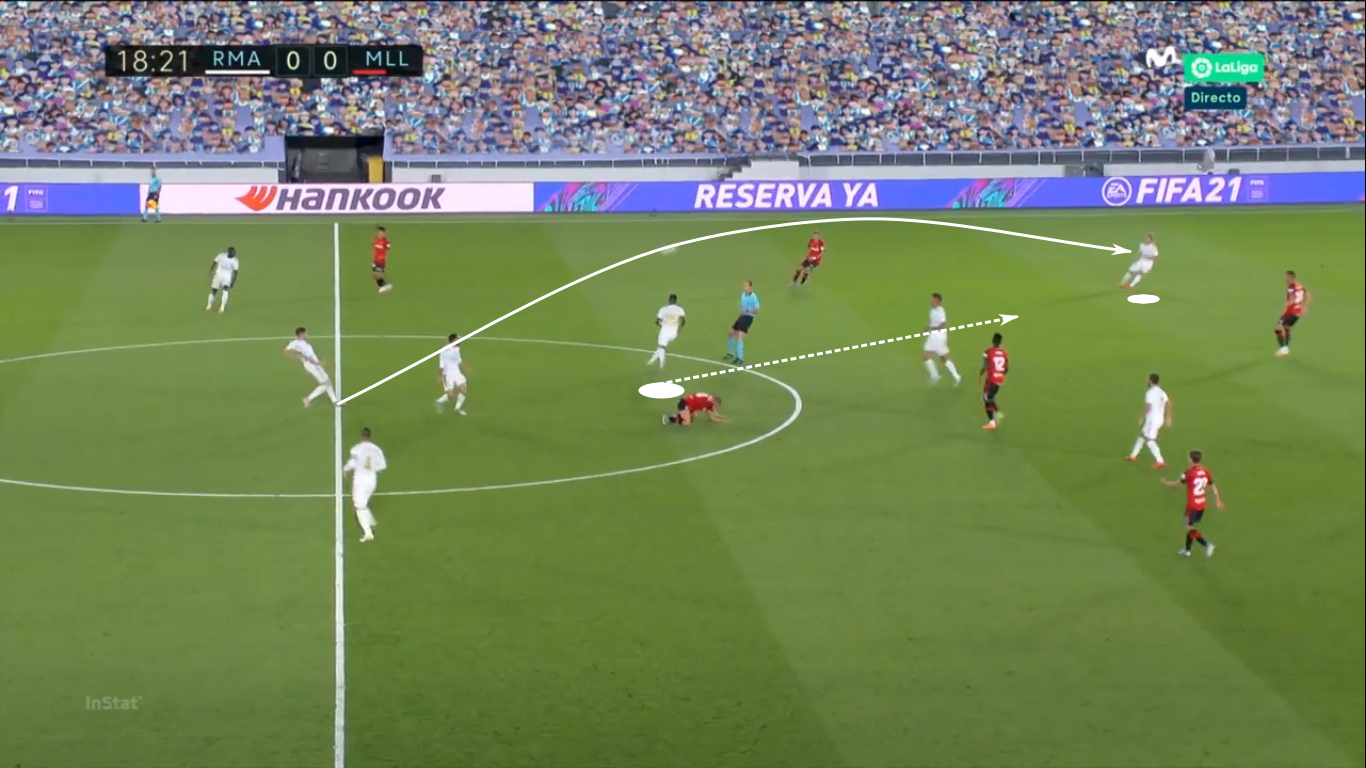 With numerical equality, Modrić pushes the pace of the attack, running directly at the centre-back, pinning him to the spot. A brilliant overlapping run from Vinícius Júnior gets him behind the backline. He cut inside and calmly finished the play, giving Madrid a lead they would not surrender. 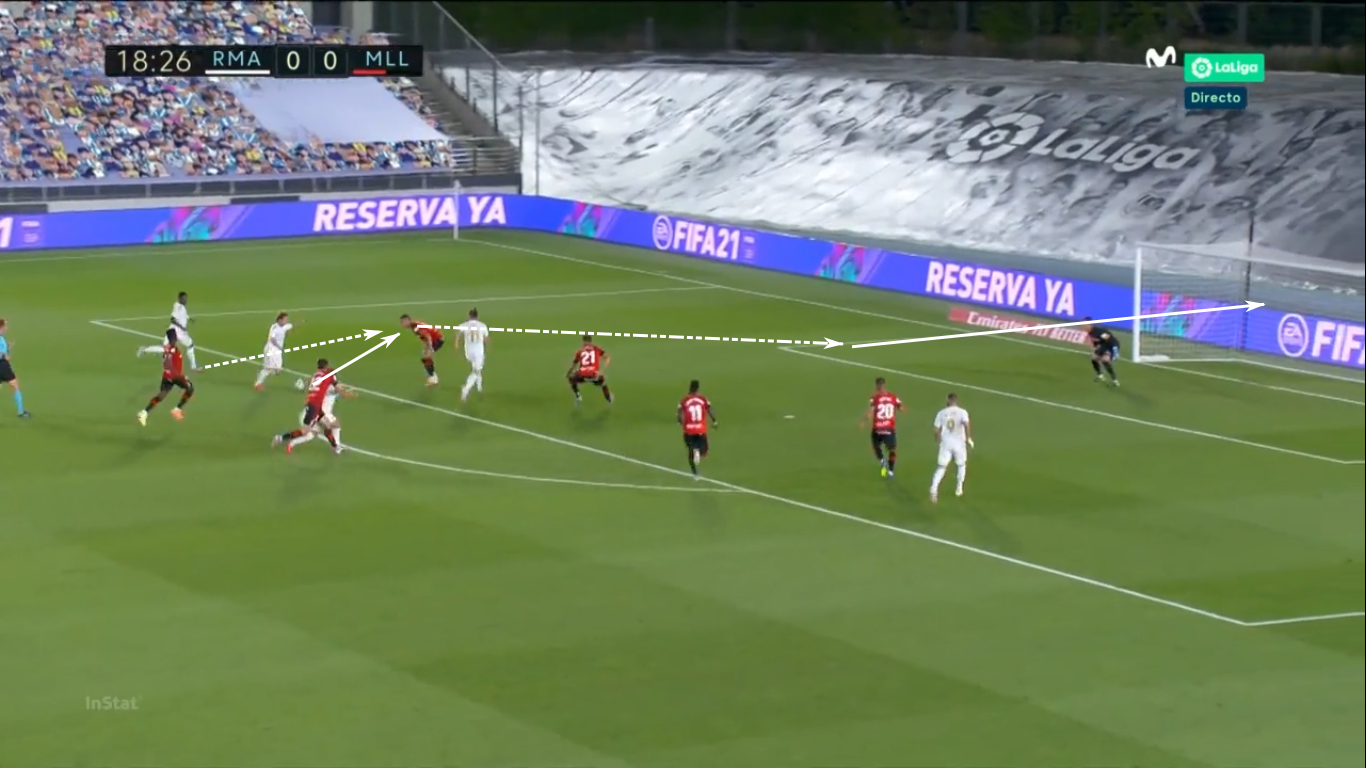 I predict that at least one goal will come from this type of sequence. Espanyol must take their chances as they arrive and Real Madrid knows it. With the majority of play likely to take place in the Espanyol third, look for Madrid to connect effectively with their high targets.

How Real Madrid will operate between Espanyol’s lines

Since Real Madrid will enjoy much more of the ball, one of the tactics you’ll want to actively watch is how effectively Espanyol positions themselves defensively. As opponents build out of the back, Espanyol will typically settle into two blocks of four with a midfield line of confrontation.

While they will sit in two banks of four, a common approach for teams looking to remain compact and deny central penetration, Espanyol does struggle to move well off the ball. Runs behind lines and deep drops from forwards tend to disorient them, opening up gaps for penetration. At first, the defence is very well structured and compact. This example from the previous match, against Real Betis, offers a nice visual. 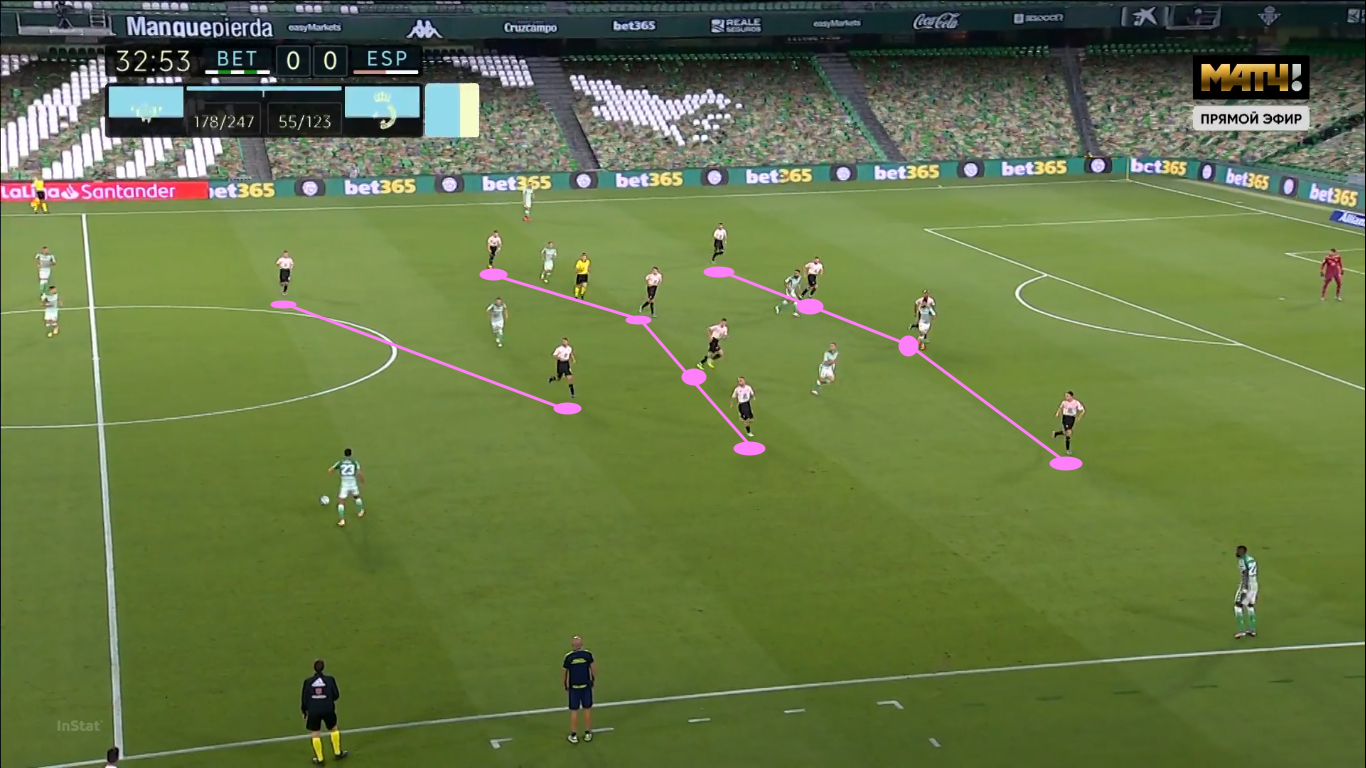 That block will gradually enter a low block as they are pushed into their defensive third, but that vertical drop, accompanied with horizontal and diagonal passes, disorganises the Espanyol defence. Switching off on attackers is not an area of strength for this side. The lines are too easily manipulated by teams that move the ball quickly. 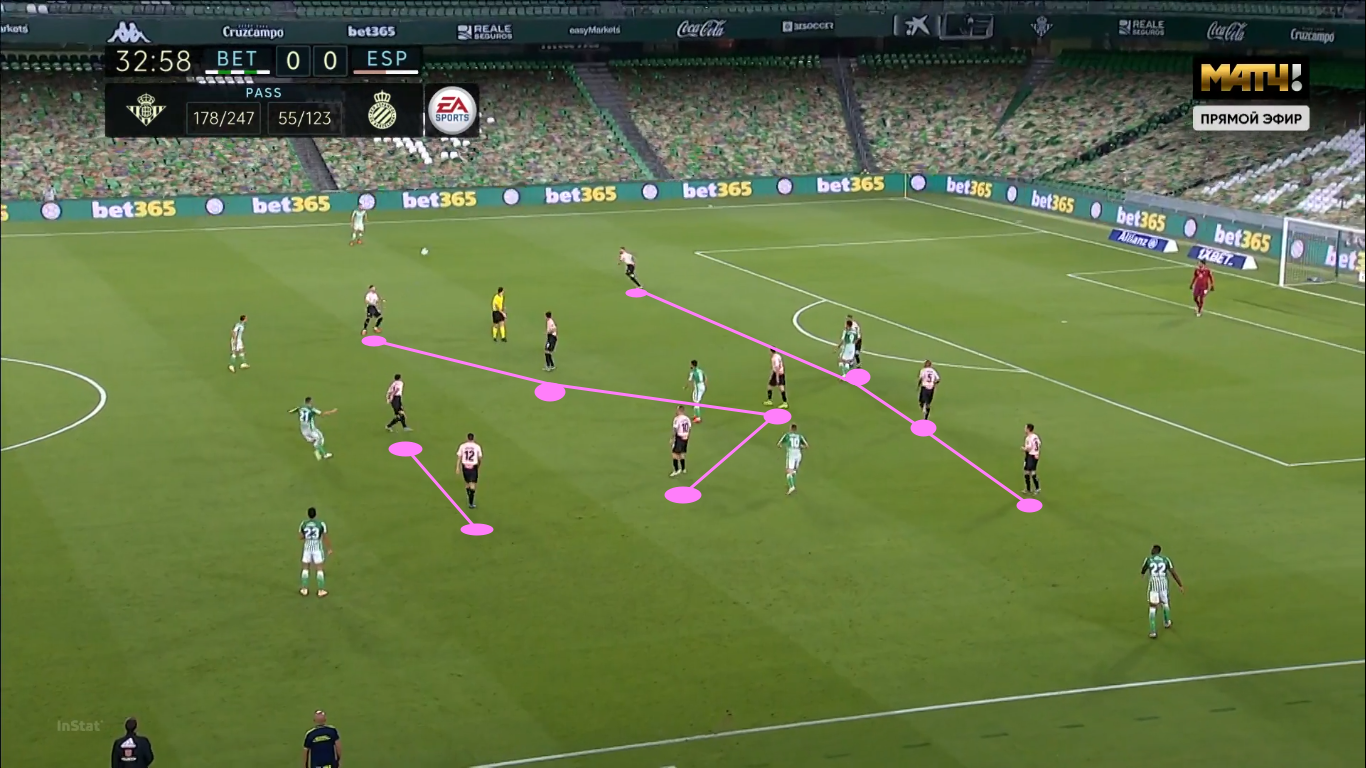 Real Madrid will use this disorganisation to free up the wing player and send long switches, but you’ll also see players like Asensio, Isco and Hazard take advantage of the emerging gaps in the defence. These three are incredibly comfortable playing between the lines, further disrupting the opposition’s ranks and offering line-breaking passes to active teammates.

In the match against Valencia, another 4-4-2 team, we saw Hazard move very effectively between the lines. Benzema joined him as the two effectively drew the opposition close to then send Hazard behind them. You’ll see a very similar approach if Asensio or Hazard starts. Isco won’t be as active running behind the lines, but he’ll offer the same type of outlet, simply opting to send a teammate behind the lines rather than himself. 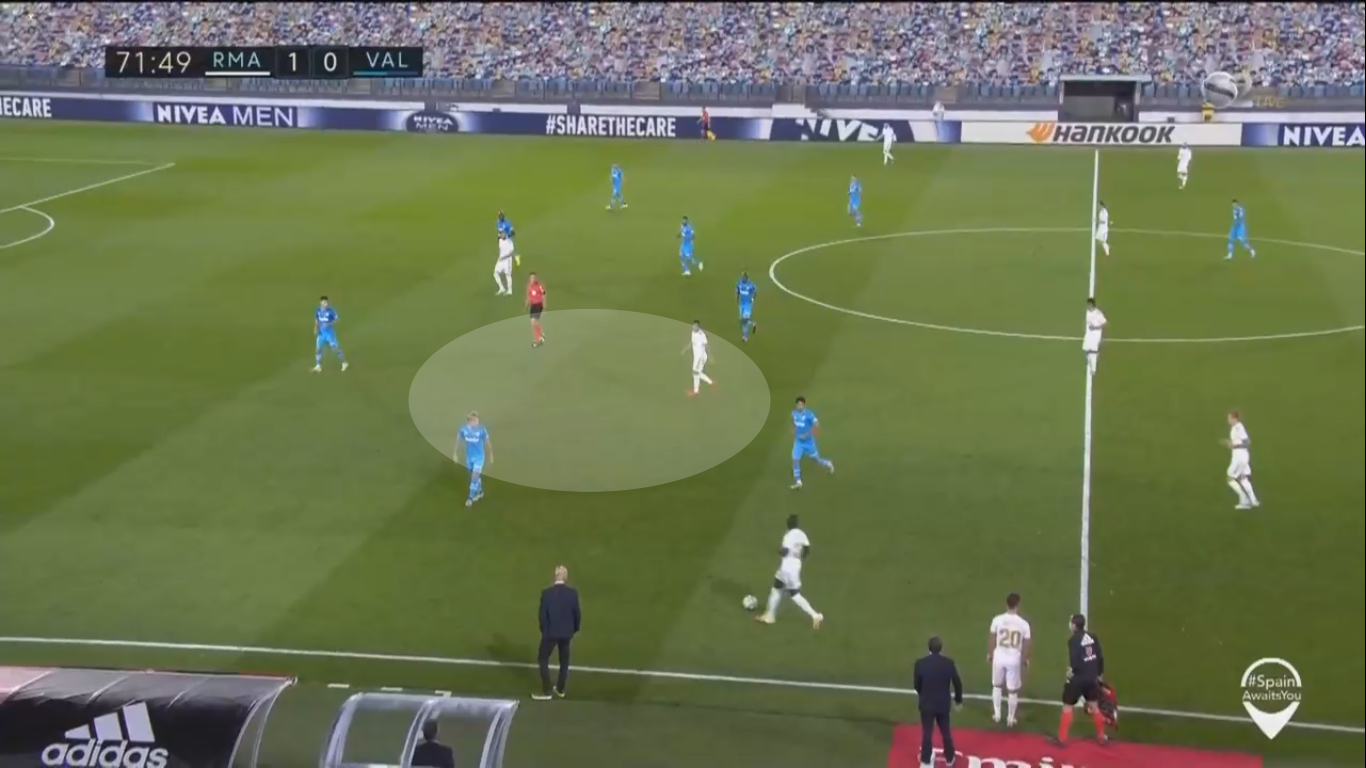 The more Real Madrid can force Espanyol to move, the easier a time they’ll have breaking lines and connecting to the higher targets. In a previous article, I wrote about Real Madrid’s use of high pairings to offer high outlets and connectivity upon the ball’s arrival. Those two attackers are then supported by the outside-back, giving them three players to attack the opposition’s defence. Expect this tactic throughout the match. If the high pairs create 2v1 overloads or an easy entry due to one defender playing off the attacker, look for Madrid the target that attacker, then use the pairing to attack in 2v2 scenarios.

Since Benzema needs a rest, Díaz is a likely candidate for the start up top. I don’t see him pairing with Hazard simply because the Belgian’s energy is better used in tandem with Big Benz. Look for a more creative attacker to pair with Díaz and Vinícius Júnior in this match.

While you can expect more rotations from Zidane, he will, of course, have the stars ready to play if necessary. With a difficult stretch of matches on the horizon, some of the stars need to at least start on the bench and limit their minutes.

Whichever Madrid players make the starting XI, they should expect a desperate, passionate Espanyol side to show up on Sunday. As of Saturday morning, Fernández’s men are eight points behind 17th placed Eibar. With only seven matches left to play, including games against Real Sociedad, Barcelona and Valencia, this side is can’t afford to drop points.

In the end, I expect a 2-0 victory for the boys from Madrid. It should be a tighter match than many expect, and let it be said that Real Madrid can absolutely blow this one open, but Espanyol has much to play for, so a two-goal margin seems right.

Klopp has passive problems: How Pep can exploit Liverpool’s issues in EPL clash

Quick transitions and the 2-3-5: What to expect from Terzić and Pep with all to play for in the second leg

After a gripping first leg at the Etihad, Manchester City travel to Dortmund for the second leg of their UEFA […] 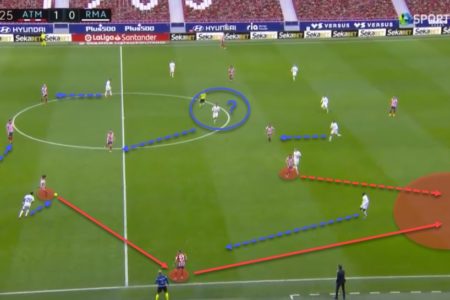 El Derbi Madrileño is always a big thing in La Liga. Atletico Madrid and Real Madrid facing off for supremacy […]