After a week of disappointing results against Manchester City and Brighton, Arsenal travelled to Southampton hoping to improve on their recent form. The Gunners sat 10th in the English Premier League table, four places above their opponents who were fresh off a 3-0 victory at bottom club Norwich City. Southampton, however, has the worst home record of all the sides this season having lost nine games at St. Mary’s. Arsenal eventually emerged 2-0 winners and in this tactical analysis, we will look at the tactics employed by Ralph Hasenhüttl and Mikel Arteta. 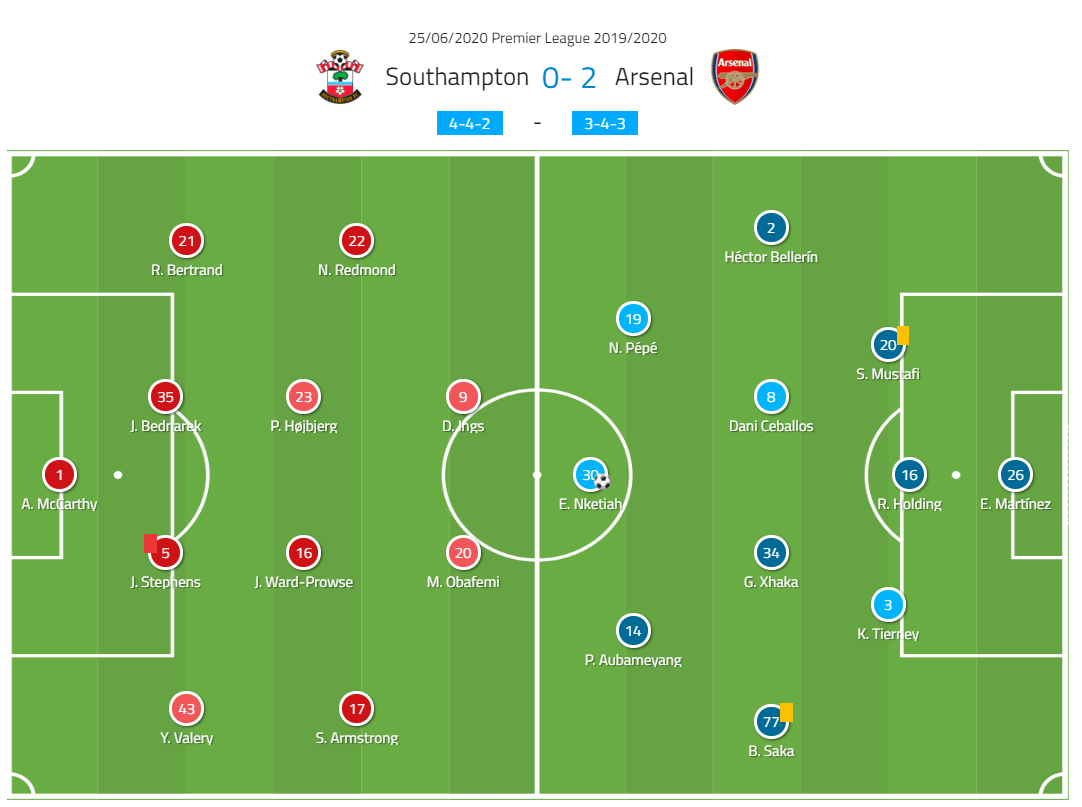 Hasenhüttl named an unchanged line-up from the team that started at Norwich. Ings scored his 16th goal of the season in that fixture and once again led the line along with Obafemi. Redmond looked to continue his goal-scoring form as well, although his record at St. Mary’s has been dismal this season.

Ward-Prowse, who was recently made club captain, started alongside his predecessor in Højbjerg. Armstrong has also been good for the Saints this season and the backline was in good form after their clean sheet in the previous fixture.

With first-choice goalkeeper Bernd Leno suffering a knee injury against Brighton, Martinez made his first start for the club since April 2017. Holding retained his place in the starting line-up with David Luiz suspended and Pablo Marí injured. Tierney replaced Sead Kolasinac and the left-back slotted into the left side of a back three.

Xhaka replaced Matteo Guendouzi in midfield with the latter supposedly being dropped for disciplinary issues. In attack, Alexandre Lacazette was replaced by 21-year-old Nketiah. Aubameyang was looking for his first goal since the restart and Pépé was hoping to add to the goal he scored at Brighton.

High press from both sides

The tactics of both Hasenhüttl and Arteta saw the sides press high through the game. In this section of our tactical analysis, we will look at how these tactics were implemented by Southampton and Arsenal. 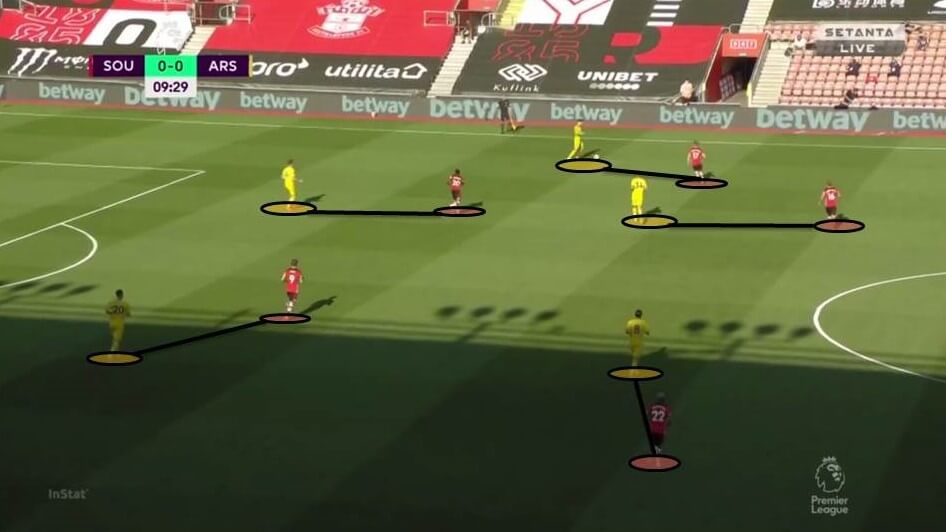 Southampton’s front two of Ings and Obafemi were supported by Redmond and Armstrong down the wings when pressing. One of Ward-Prowse or Højbjerg would also push up to engage this press and force Arsenal to play long passes rather than build up from their own half.

This high press meant that the Gunners had to push their play down the wing with Saka moving higher up the pitch. Their midfielders in Ceballos and Xhaka could not drop back and receive the ball as they like to do and hence they had to change their tactics to evade this high press from the Saints.

However, the fact that Arsenal played with three centre-backs meant that they could afford to play these long balls as their wing-backs in Saka and Bellerin could play a much higher line along with the midfield rather than stay back. 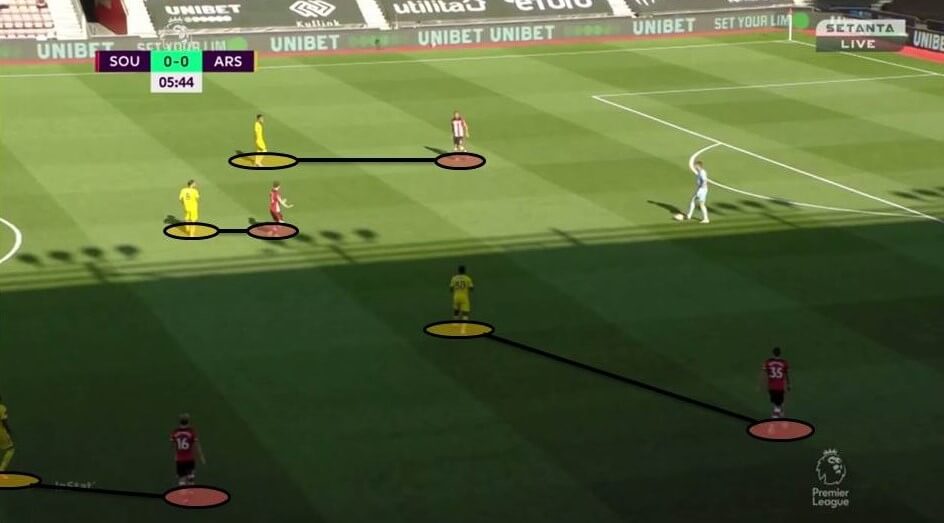 The Gunners themselves engaged in a high press when they were out of possession and Aubameyang and Nketiah ensured that they were always closing down the centre-backs quickly. This was problematic for Southampton who was looking to maintain a high line in defence with Stephens and Bednarek rarely dropping to their own defensive third.

Much like Arsenal, the Saints also had to play long passes out to their wingers and full-backs that were pushing very high. Valery and Bertrand would play close to Redmond and Armstrong who had the freedom to then cut in towards the Arsenal box.

However, an important point to note is that Southampton were playing with a back four and this push from their full-backs meant that it was often only the centre-backs who stayed behind.

While both teams looked to maintain their initial structures, they also adopted a variety of formations and often shifted between them. In this section of our tactical analysis, we will look at these shifting formations. 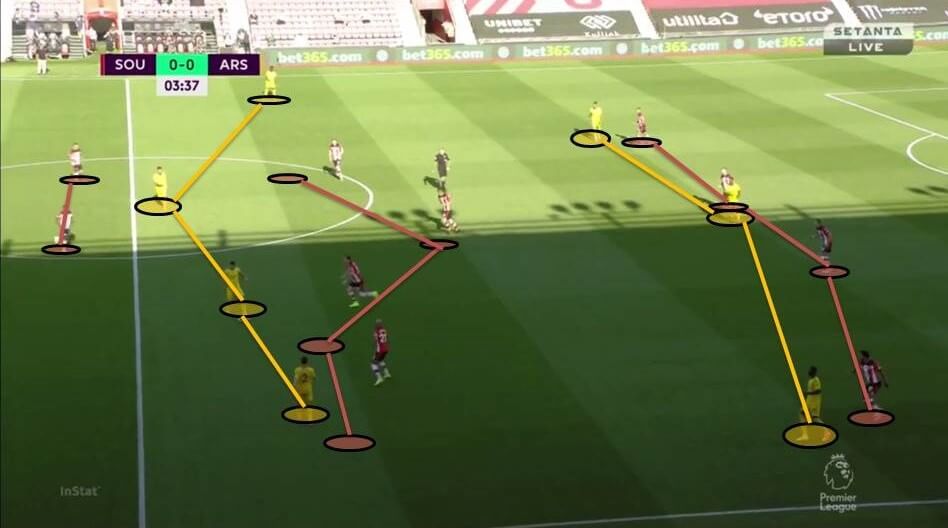 Arsenal started with their 3-4-3 with their wing-backs in Saka and Bellerin pushing higher and providing an attacking threat. The idea was a good one considering that Saka has been excellent in an attacking sense this season and Bellerin’s pace can always pose a threat to the opposition.

However, Arteta also played Tierney as the third centre-back which seemed like an unusual selection at first. Tierney has been known to play as a left-back in a back four and entrusting him with a centre-back role was a gamble considering he has not played often this season owing to injuries.

This, however, paved the way for Saka to push higher and most of the Arsenal attacks were channelled down the left flank. This meant that they were capable of changing what was a 3-4-3, originally, to a 4-2-4 in a matter of seconds, with Bellerin dropping back and Saka pushing up. Tierney would also shift to his natural left-back position in this manner and this meant Arsenal was ready for any counter-attack as well.

As for Southampton, they looked to maintain their 4-4-2 formation to a large extent but also shifted to a 4-2-4 as well. The high press meant that the wingers would move higher up the pitch to cover their opposing defender and the shift to a 4-2-4 saw them pose a high attacking threat. Interestingly, their high press even saw them shift to what was almost a 2-4-4 formation as shown below. 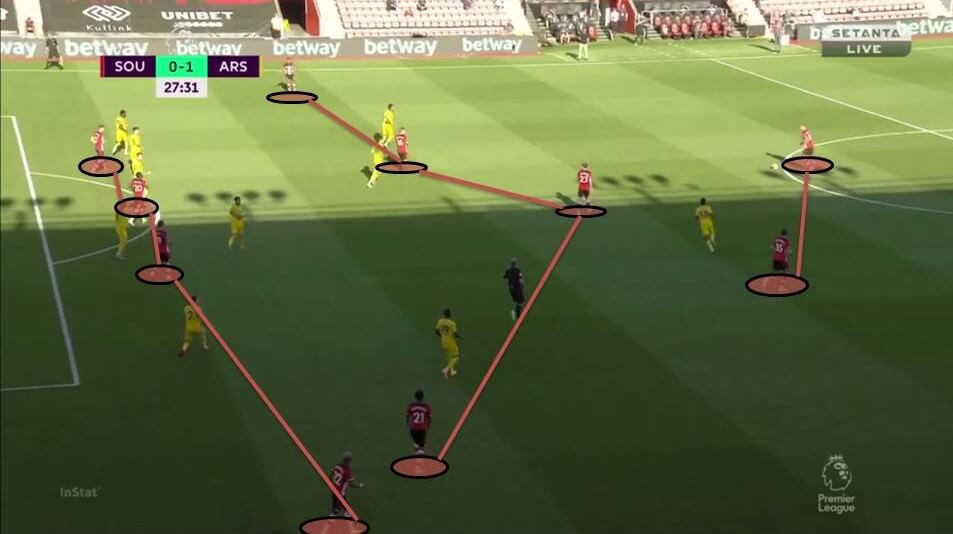 Hasenhüttl’s tactics meant that, as mentioned earlier, the wing-backs would push high up the pitch and leave the centre-backs to stay behind. This attacking structure meant that Southampton would crowd the wings and the final third. They would often look to play the ball out wide to their full-backs or their wingers who could then cross the ball into a relatively crowded box. Ings and Obafemi themselves often drifted wide to drag defenders out of position and provide a chance for Armstrong or Redmond to cut in and take on the defence.

This meant that Arsenal would have to drop back in order to prevent an overload of their wings and hence, they had to maintain a defensive structure as below. 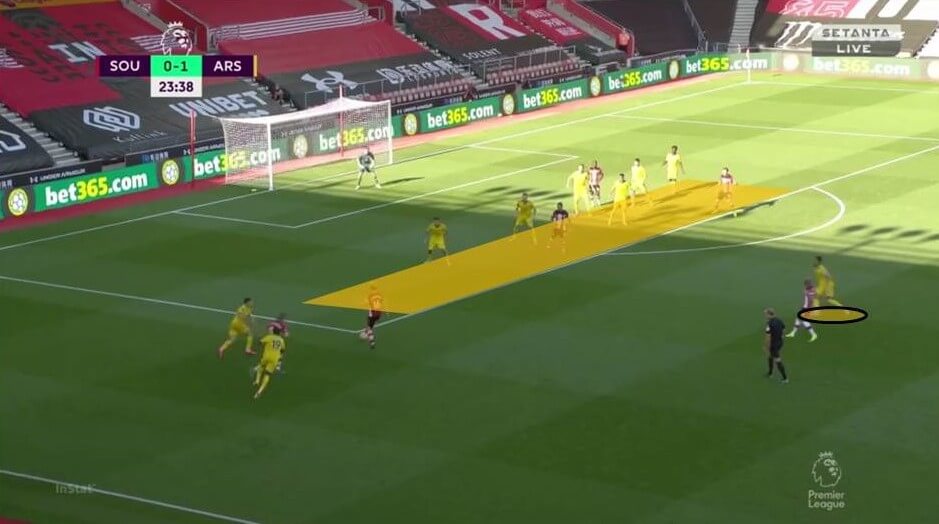 With both Bellerin and Saka dropping back, Arsenal formed a back five. Ceballos and Xhaka would then slot in between gaps in the defence centrally while Pépé would also drop to support Bellerin. Aubameyang did not drop back all the time though, meaning that defensively Arsenal took up either a 5-3-2 formation or a 5-4-1 formation. These tactics meant that the Gunners could ensure that their box was crowded with their own players and also meant that they could break with pace on the counter.

Unknowingly, Arsenal sitting back like this meant that Southampton was pushing higher and higher and this eventually lead to gaps in the Southampton defence that the Gunners could then exploit.

Arsenal takes advantage of the gaps in the Southampton defence

As we mentioned earlier, Southampton were keen to push high up the pitch and only had their two centre-backs laying deep. As a result, this opened up a lot of situations where the Arsenal forwards found themselves matching the defenders in numbers. In this section of our tactical analysis, we will look at how Arsenal exploited the gaps in the Southampton defence. 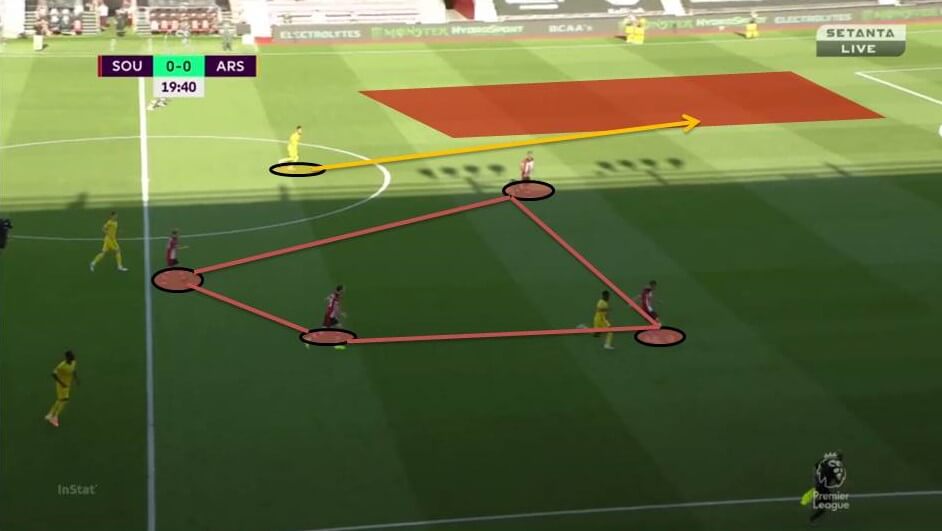 As we can see from the above image, Southampton had hoped to play with a double pivot in midfield to support their centre-backs. However, Arsenal’s effective high press meant that they would cut off the passing option to the pivots and force the defenders to play it back to the goalkeeper. The goalkeeper, McCarthy, would then be forced to play the ball upfield, as mentioned earlier in the tactical analysis.

We can also see the space that Arsenal’s high press has created. Aubameyang has loads of grass to run into past the defence and is already anticipating the pass back to the goalkeeper. In fact, the above situation led to a goal for Arsenal as Nketiah was able to press McCarthy and intercept his pass before slotting the ball into an empty net.

The Southampton defenders were not confident on the ball and were put under pressure by Arsenal’s press, causing them to make bad passes. 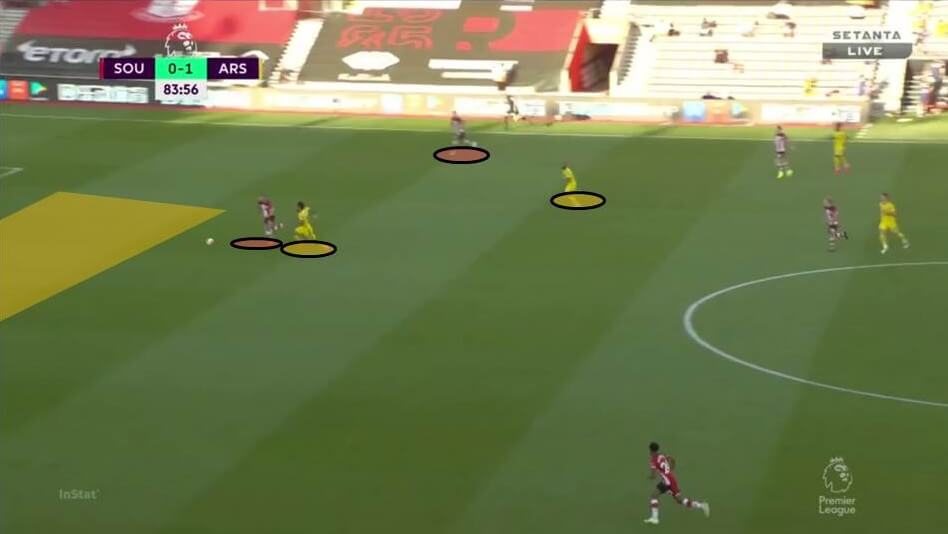 Another crucial instance of Southampton’s shaky defence can be seen above. Arsenal’s press coupled with their high full-back push has meant that the centre-backs have had to move wider to provide support for the midfielders. However, they still find themselves matched in terms of numbers and have no choice but to look for a pass backwards.

Miscommunication and an uncomfortableness on the ball have meant that Aubameyang is able to put pressure of Stephens who is pretty much the only player stopping him from running through on goal. This instance was crucial to Arsenal’s second goal, with Stephens getting sent off after conceding a crucial free-kick outside the penalty area.

It was a major blow for the Saints who had been mounting a fightback, but their defensive woes were exposed by the quick Arsenal attack who managed to create a chance for themselves out of nowhere.

Their tactics of laying back and then pressing the defence saw them find a crucial opportunity to put the game to bed. Hasenhüttl’s tactics, though they had piled the pressure on the Gunners, inadvertently backfired as it exposed his centre-backs to the pacey Arsenal attack.

Although the Saints did play well, they eventually had nothing to show for all their effort as they were unable to pick apart the Gunners. Their constant pressure did not create many concrete chances and instead opened them up to the Arsenal counter-attacks.

Arteta would be pleased with how his side managed to expose their opponent’s weaknesses and would hope that this victory sees a change in form for the Gunners. Hasenhüttl, however, would be disappointed with the result and would look to turn things around in their next fixture.