Despite their performance throughout the Serie A season, Atalanta failed to bring the Coppa Italia home, after a 0-2 defeat by Lazio. I Biancocelesti managed to take advantage of a couple of their opportunities and scored twice in a short period of time making it impossible for Atalanta to bounce back.

Both managers stuck to their preferred formations and didn’t take any risk to be surprised. Gian Piero Gasperini might have made the wrong decision keeping all of his three substitutions till the last ten minutes and using them right after conceding their first goal.

Lazio surprised defensively as mixed with the lack of good finish from their opponents managed to keep a clean sheet. The team have not been in their best defensive shape conceding 40 goals in Serie A while scoring 52.

In this tactical analysis, we will look into how Lazio stopped the in-form Atalanta and put their hands on the Coppa Italia. 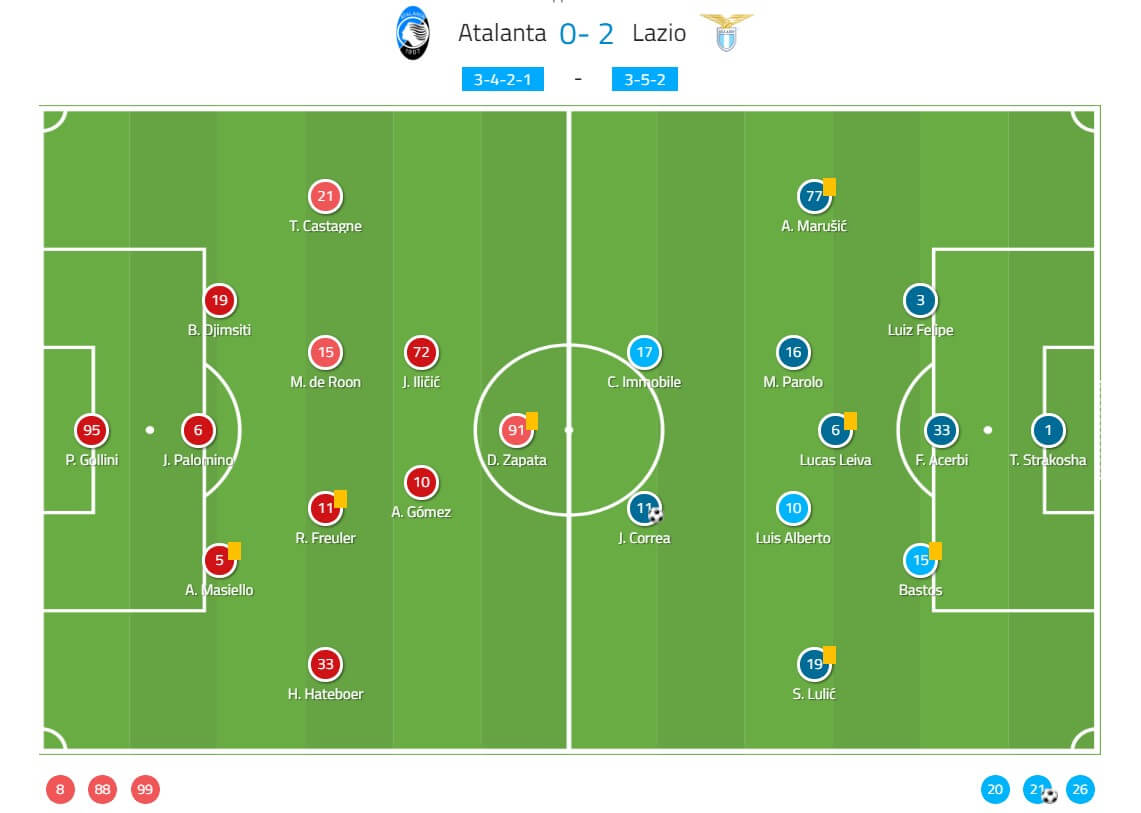 Atalanta went out in a 3-4-1-2 formation with Pierluigi Gollini in goal. As back-three, Gasperini relied on Andrea Masiello, José Luis Palomino and Berat Djimsiti. Hans Hateboer and Timothy Castagne had a wing-back role on both sides, with Remo Freuler and Marten de Roon operating in the central midfield. Up front were Alejandro Gómez, Josip Iličić and Duván Zapata who were trying to rotate positions.

For Lazio Simone Inzaghi chose the 3-5-2 (3-1-4-1-1) formation with Thomas Strakosha at the goalkeeping spot. A three-man defensive line of Luiz Felipe, Francesco Acerbi and Bastos was topped by Lucas Leiva in the defensive midfield as the pivot of the team. Leiva was surrounded by Adam Marušić, Marco Parolo, Luis Alberto and Senad Lulić in the midfield area. Joaquín Correa and Ciro Immobile were positioned in the final third, with Immobile being in a more advanced position.

Sticking to the plan wasn’t enough for Atalanta

Despite the result, Atalanta showed quite a balanced performance. With their 3-4-2-1 formation, they were trying to build up from the back but would often find themselves stuck in the midfield area. When forming an attack they would spread out to the wing-backs who would then deliver the ball to the central midfield. That is where they were lacking creativity as De Roon and Iličić would often do short pass combinations but experience trouble distributing the ball further.

At times they had sparkles of creativity (sending eight smart passes) but they were lacking accuracy and the opportunities were wasted. Atalanta’s players sent 42 passes to the final third with only 59.52% accuracy, compared to 55 with 76.36% accuracy for Lazio.

The low accuracy was causing them trouble in every phase of the attack. They’ve scored 10 goals from set-pieces in the Serie A, but due to the low accuracy rate and Lazio defending well, they couldn’t take advantage of their three free kicks and four corners.

The captain Alejandro Gómez was the one disturbing Lazio’s highly positioned defensive line due to often being left uncovered. This resulted in him shooting dangerously three times, where again the accuracy and the lack of measured movement stopped him from scoring.

Atalanta were better getting back the possession but couldn’t keep it for long. On a few occasions, it served them good for creating counter-attacks, but again lack of good finishing cost them a lot. The team hit the woodwork twice and had only two shots on target out of 13.

The first goal was conceded in a set-piece situation – 12 of their 44 conceded Serie A goals were scored while defending set-pieces. Three minutes after replacing Luis Alberto Sergej, Milinković-Savić gave Lazio the lead with a headshot.

When it comes to defensive actions, both teams had comparatively highly positioned defensive lines. The second goal was a result of the lack of awareness in the defenders.

During a set-piece action, the whole team was positioned in the box in order to seek an equalizer in the last couple of minutes. At this moment only Freuler and Gómez were covering back and marking Correa. Once Atalanta lost the possession of the ball they had to chase a long ball to Correa, who outran them and scored. In this situation, the lack of speed and strength off the ball movement cost them, conceding again.

Quite a lot of rotations were happening in Atalanta’s backline. Masiello and Djimsiti would stay more compact and position themselves more centrally in the defensive midfield, whilst Hateboer and Castagne would use their wing-back roles to take care of their defensive responsibilities. They would also switch positions. These movements were made in order to help the team in the build-up phase.

Simone Inzaghi used a 3-5-2 (3-1-4-1-1) formation using a short pass combination to constantly keep the ball up high in the opposition’s half. Lucas Leiva’s defensive midfield positioning turned him into the main link for their attacks as his connection with Correa was outstanding.

Leiva, Luis Alberto and Correa were the main links for keeping the possession of the ball circulating it in the midfield area with short pass combinations. In order to bring more explosiveness and break this passing pattern in the end, Inzaghi replaced Alberto with Milinković-Savić which turned out to be the right decision.

Correa would drop deeper to receive the ball and help distribute it to the final third, although their passing patterns would often leave Ciro Immobile isolated at the tip of the attack. The second goal was a result of Correa’s attacking flair and him counter-attacking on his own. He exposed the highly positioned (in this case almost non-existent) defensive line and due to his strong decision-making made it 2-0.

The better gameplan from Inzaghi and the players patiently waiting for their chance (and not missing it) led Lazio to their first trophy since 2013. The lack of concentration and good finishing turned out to be the turning point for Atalanta, as unlike Lazio, they couldn’t take advantage of the opportunities they created.