It was the dullest-ever climax to Chelsea’s fifth-round FA Cup fixture against Manchester United. The Blues had been displaying a boring possession play when the ball came into Hazard’s feet. The Belgian had a pretty chance to play a long pass to Higuain but it had already been late for Higuain. The opportunity didn’t convert into a goal – just like it’s been the case for Sarri’s men for the last many months.

Fast-forward two weeks. The Blues are again displaying themselves as tough visitors by dominating the possession at the Craven Cottage. The scoreline is null-all. Higuain ends up with a critical pass. But here, despite being under the press, the striker scores. It’s Fulham 0-1 Chelsea now. And that doesn’t stop there. Chelsea would go on to win this game and afterwards too eventually land the third spot in the Premier League table.

It’s clear that Chelsea’s likelihood to score goals increased substantially during the latter half of the season. Mining the numbers, Chelsea’s expected goal (xG) statistics, which can provide a reliable way to judge the quality of shots by assessing their likelihood of becoming a goal, increased during the season’s final third particularly after the Premier League second round fixture against Fulham. Before the clash vs Fulham, the Blues were getting an average of 1.55 xG per match; after that, they got an average of 1.77 xG per game. Furthermore, after the clash, Chelsea earned their season-high rolling average of xG, i.e. 2.1 per match. Only during the opening months of the season, Chelsea scored a rolling average higher than this when Sarriball was at a peak. Before vs Fulham Chelsea’s, however, the highest xG could only hit up to 1.75.

The tactical analysis below explores the increase in Chelsea’s xG during the concluding phases of the current football season and the potential contributory factors, incidents, and tactical decisions behind the same. The analysis provides useful insights into the tactical narrative behind Chelsea’s recently improved quality of attacks by the end of the season in the context of one of the most comprehensive statistical indicators being used worldwide to assess a team’s performance and estimate the expected scoreline, i.e. the expected goals (xG).

The composition of Chelsea’s xG

The expected goals are calculated using different xG models; each assigns different weights or values to multiple factors as per the qualitative and quantitative contribution of each in assessing the shot quality. To calculate individual players’ xGs the basic xG models usually include the number of shots; shot location; the in-game situation; and the proximity of opposition defenders. While to calculate the team’s xG, the models add up individuals’ average xGs per match. 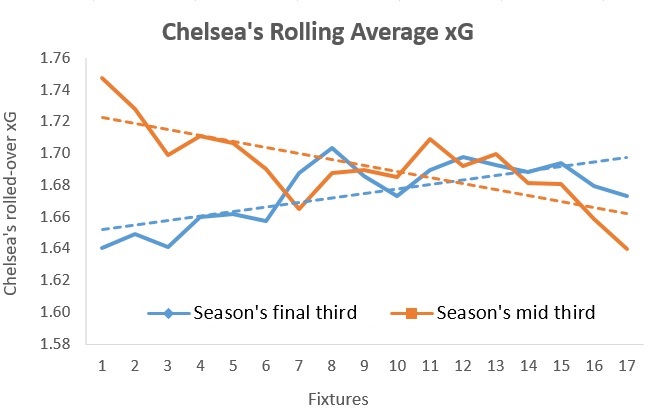 These are 17-game rolling average series of Chelsea’s xGs before and after their match against Fulham, depicting a comparison between Chelsea’s attacking quality during the middle and final thirds of the season respectively. Thanks to Chelsea’s improved offensive game in the season’s last third which, ultimately, increased their shot quality as their xG trendline seems to be progressing upwards compared to that in mid-third of the season.

Chelsea’s increase in xG aggregates the individual players’ average xGs, which improved as the football season progressed into its concluding stages and thus contributed to increasing in Chelsea’s xG during the period.

Below is the plot of the rolling average xG of Higuain for the final and middle third of the current season. The trendline after the Fulham match (i.e. season’s last third) is improving versus the tend line before the game (i.e. season’s middle third). The Argentine earned an xG of 0.35 during the season’s final third compared to an xG of 0.24 earlier. That makes up to a notable increase of 0.11 xG. 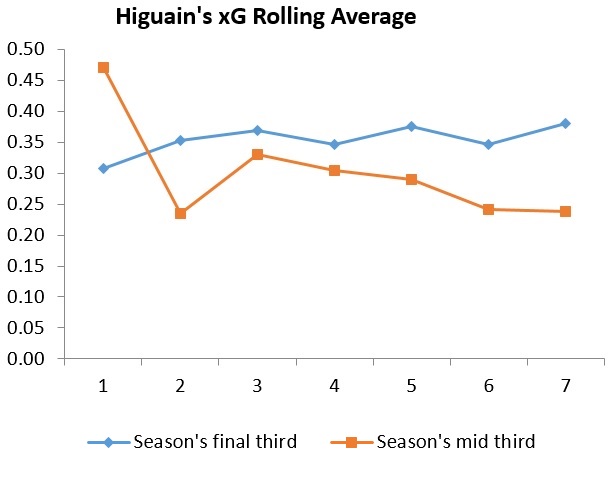 Loftus Cheek made another more remarkable contribution. Not only did the average xG stats of the midfielder improve after the Fulham match but also did the trend of xG per game. The Englishman earned an xG of 0.1 during the season’s final third compared to an xG of 0.04 earlier. 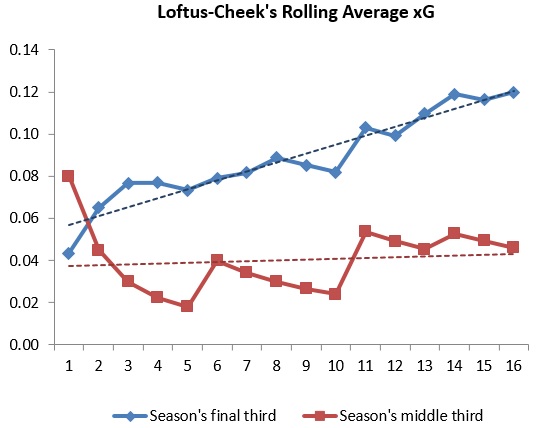 Hudson-Odoi also made some direct contributions to Chelsea’s xG. The xG trendline of the winger may not have increased even during the last third of the season but his average xG stats for the period (0.15) is still higher than earlier (0.12) – see the gap between the two trend lines. 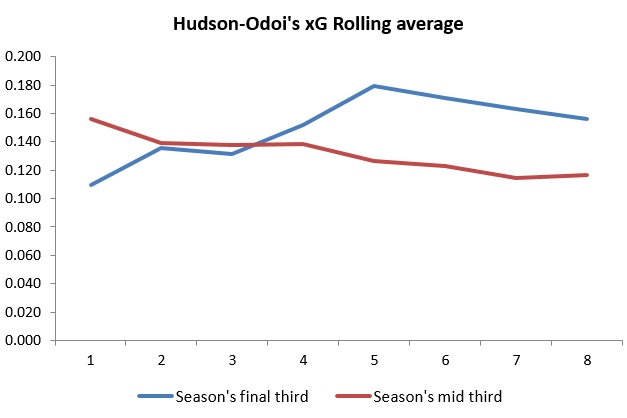 In terms of indirect contributions, Hazard’s role is self-explanatory. The Belgian’s average xG and the average number of shots played per match decreased during the final third of the season. Hazard’s statistics thus did not contribute directly to Chelsea’s xG stats. However, Hazard’s attacking presence and quality of chances created have improved over the period. In particular, he made more progressive runs on average (4.17) during the last weeks of the season that he did on earlier (3.3) – see the wide gap between the two trend lines. 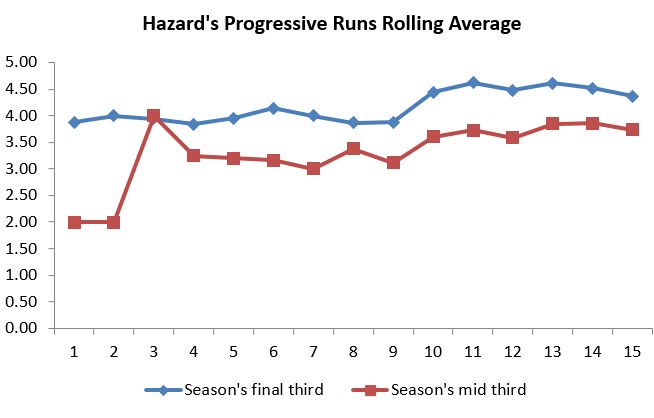 Although the increased xGs of the abovementioned players are not sizable in magnitude, individually, their combined effect has been enough to make a significant upward push in Chelsea’s xG both in size and as a trend.

The narrative behind Chelsea’s xG stats

What stimulated Chelsea’s xG (both of team and individuals) during the final third of the season? To better understand how Chelsea’s increase in xG reflects in their improved attacking performance, let’s dig into the qualitative side of the team’s xG narrative.

Well, it’s been evident that their quality of attack immensely improved as they have shifted their style of play from possession focused to a more direct approach during the final months of the football season. Sarri’s men didn’t just change their approach to the direct style of play in isolation. Instead of displaying those brief moments of direct passes we used to see before the final third of the season, they made some key breakthroughs which complemented Sarri’s ‘renewed’ offensive scheme.

One of these breakthroughs is Loftus-cheek serving as a missing connection between Chelsea’s midfield and attack. For most of the season, Chelsea’s attack was at a minimum dialogue with the midfield. For instance, in an away Premier League fixture of Chelsea against Manchester City, there were only three instances when Higuain could create a connection with Chelsea’s midfield. However, as Loftus-Cheek became a more integral figure of Sarri’s squad during the final months of the season, Chelsea’s midline-frontline dialogue becomes more prominent and consistent. For instance, during the build-up play for a goal scored by Chelsea in Premier League second round fixture against Burnley, Loftus-Cheek went on to dribble from the midfield to final third with a fast pace as a counter-pressing mechanism and passed the ball to Hazard for him to create attacking opportunities. The attacking play translated into a goal for Chelsea. 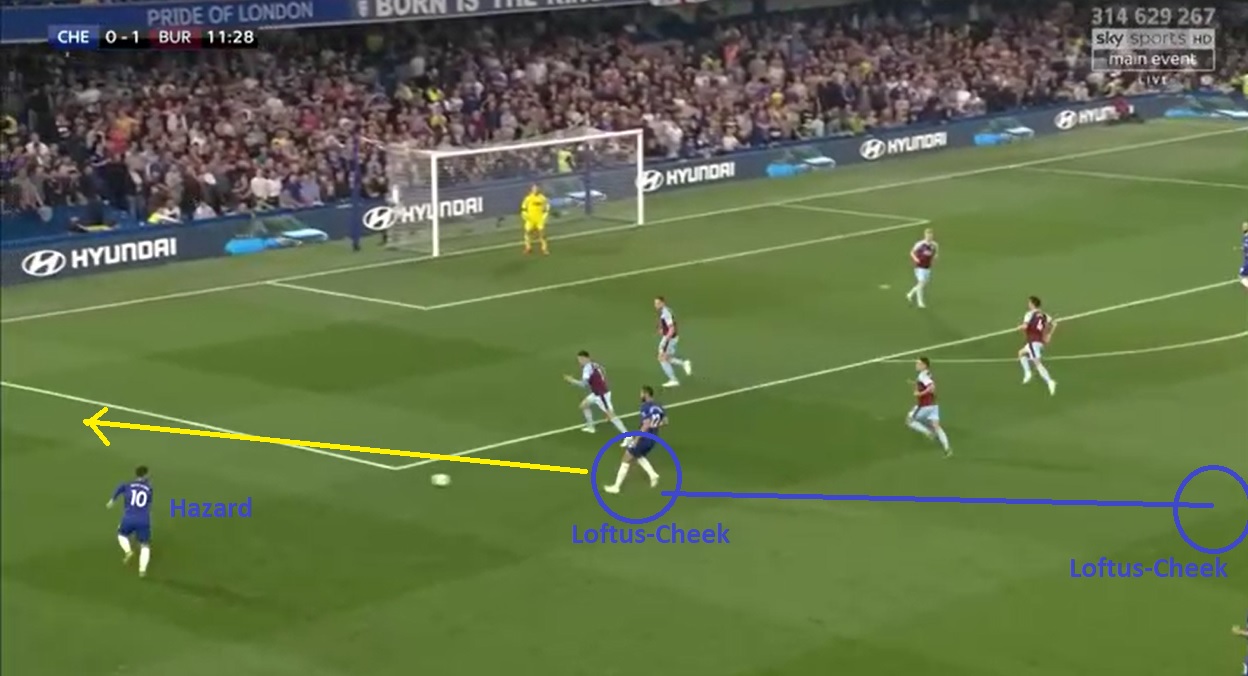 Second, Hazard and company also made the breakthroughs in the final third of the pitch by dropping into pockets of spaces to create chances which, ultimately, bumped up the quality of Chelsea’s attacks and thus their xG. In the fixture against Brighton, it was Hazard who dropped into pockets while Giroud’s tactical movements had been distorting a defender away from Hazard which gave the Belgian space to hit a long shot at the back of the net. In the same fixture later, Loftus-Cheek dropped into pockets of space and ended up scoring a long ball from there. 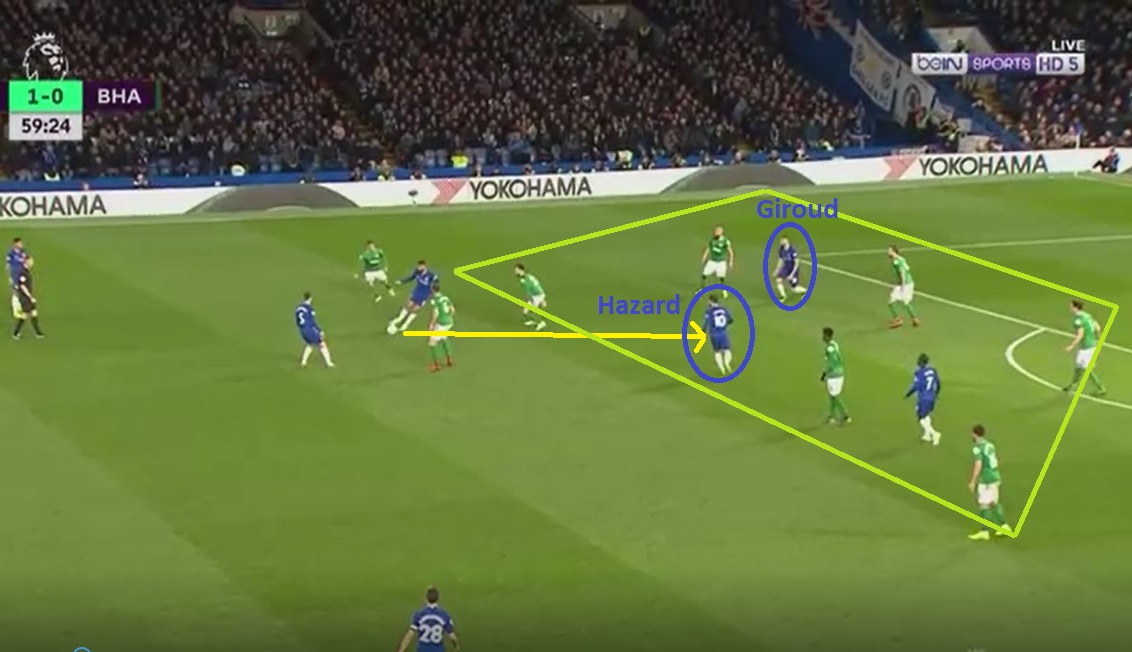 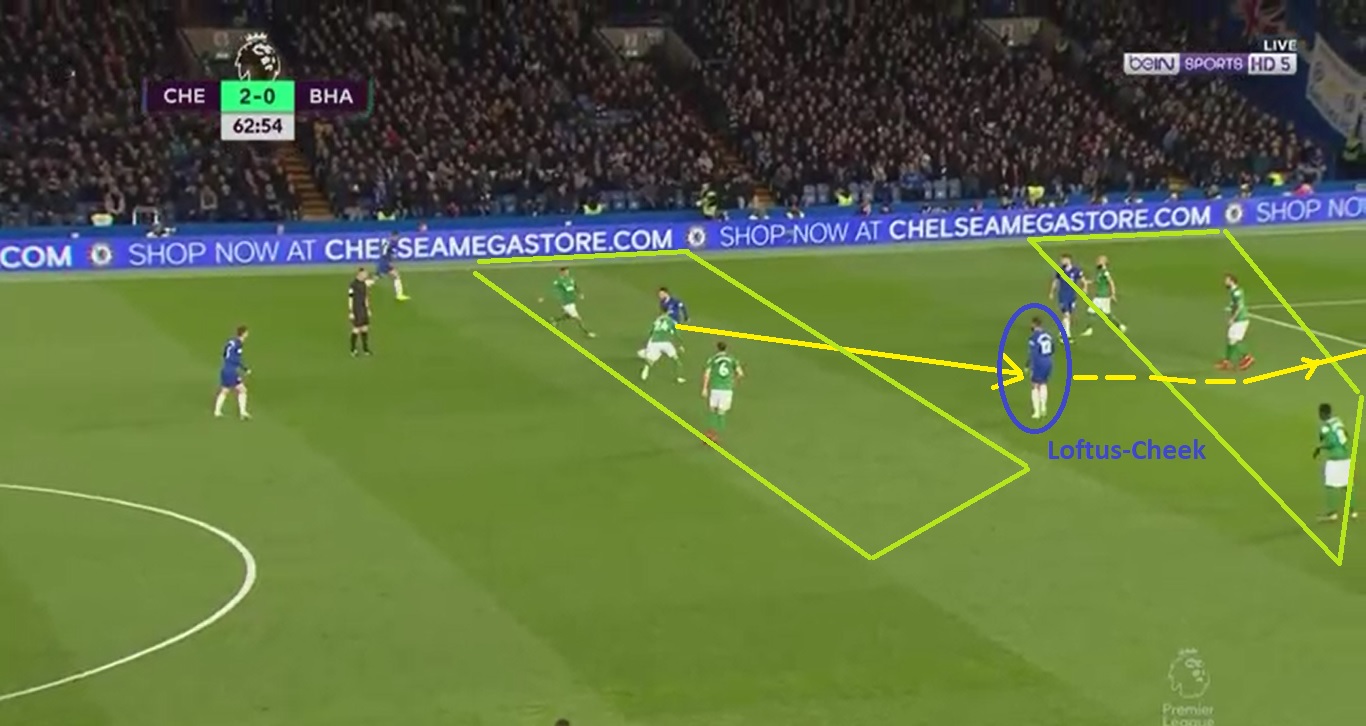 The third breakthroughs made by Chelsea’s frontline and advancing players were their timely tactical presence inside the box which dodged defenders and thus increased Chelsea’s chances to convert the shots into goals. In the fixture vs Cardiff, it was Giroud whose tactical presence in the goal area complemented Azpilicueta’s headed goal after Chelsea earned a corner. The Frenchman’s dangerous position did the job of distracting an opponent’s defender away from Azpilicueta.

In Premier League second round vs Watford, it was Azpilicueta whose advancing moves towards the byline stretched out Cardiff’s defenders a tad allowing Higuain to convert Pedro’s assist into a goal brilliantly. Both Giroud and Higuain exploited more of their tactical intelligence during the last third of the season than they did before. 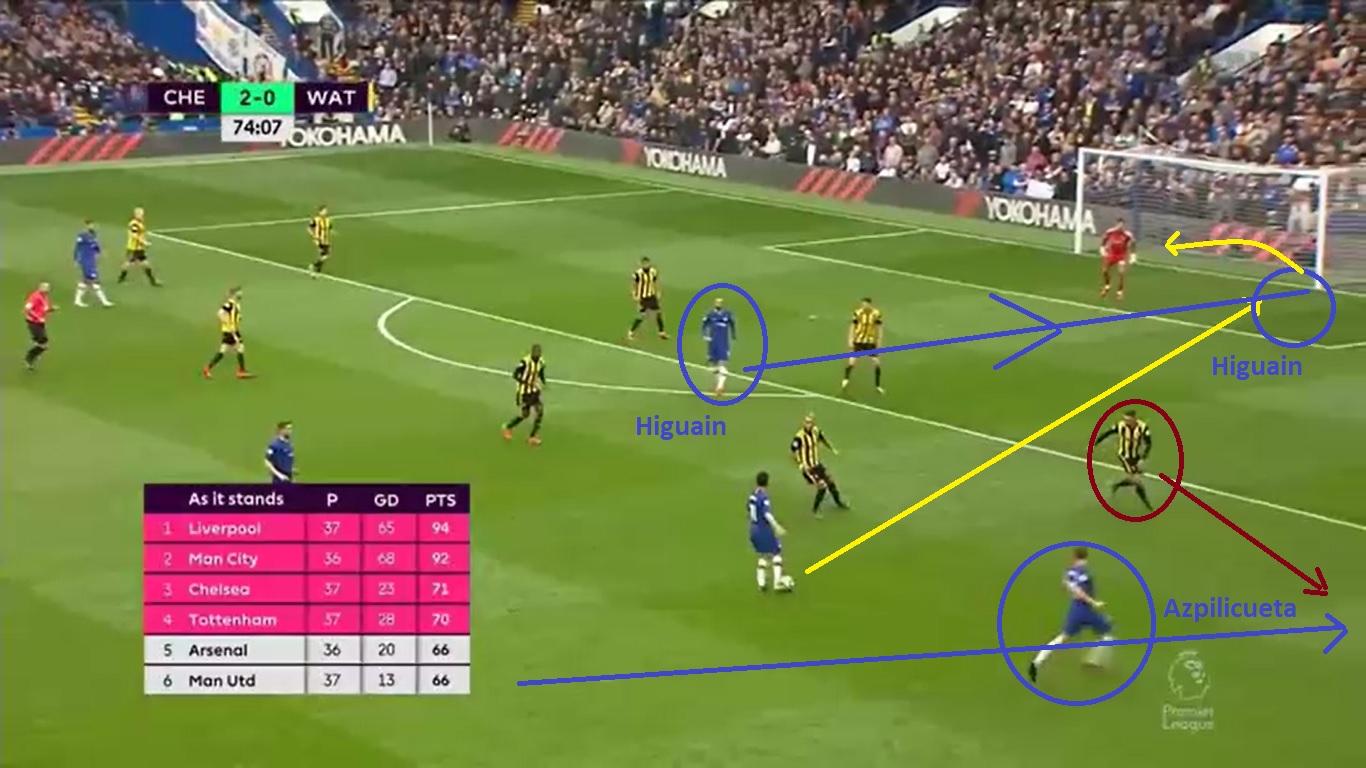 The tactical movements of Chelsea’s players also intensified their offensive presence in almost all the fixtures during the culminating months of the season. In the fixture against Burnley, Chelsea scored their second goal by playing fast-paced, progressive passing from the final third of the pitch to the goal area. The progressive play was an outcome of Chelsea’s numerically strong attacking presence.

No doubt, the increased offensive existence of Higuain, Loftus-Cheek and Hudson-Odoi must have increased their xG average during the respective period and thus Chelsea’s rolling-average xG.

The enhanced offensive presence also made more effective use of Hazard’s counter-pressing dribbles, pace, and adhesive control. In the second round Premier League fixture against Fulham, Hazard’s dribble towards the goal area drew the defenders towards him which would free up Jorginho. Here, Hazard didn’t hold the play too long, unlike before, and instead passed to Jorginho who would put in a decent finish inside the crossbar. 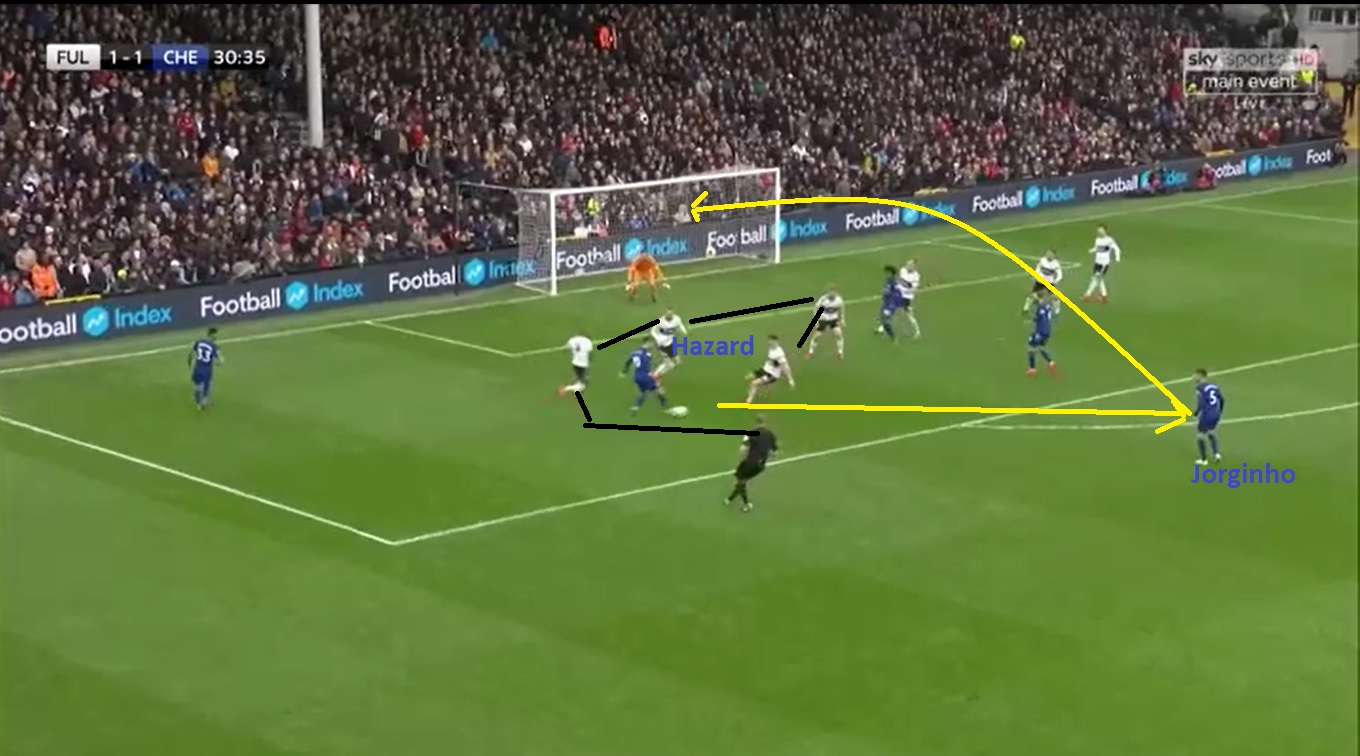 The result of these breakthroughs in Chelsea’s gameplan is that the attacking play in the final third is now executing and concluding at a point and with a pace where it used to end earlier followed by loss of possession; since there were not enough players who had reached towards the goal area within that span. On the other hand, during the final months of the season, Chelsea’s advanced players were more apparent in their positions and offensive roles to play when the attacking play reaches the last third. That coherency also boosted the attacking dynamism among Sarri men, which had been lacking ever since Sarriball began losing its charm.

Wrapping it all together to say that Chelsea’s increase in average xG during the last third of the season is associated with the fundamental changes which Sarri instilled in Chelsea’s game rather than forcing them to fake Sarriball and keep getting figured out at the attacking front like they have been doing all season. These breakthroughs allowed Sarri to programmatically adopt a more direct style of play coupled with glimpses of Sarriball possession style, where needed, instead of overlying on Sarriball yet ending up on playing directly as an escape plan. All these tactical reforms, as illustrated below, acted in coherency with each other to produce a quality attacking game which ultimately added up the quality of shots played by Chelsea, or in other words their season’s xG statistic.