Eusebio Di Francesco’s first games in charge at Sampdoria weren’t a fairytale, with the team losing all of its three games so far. Despite having a dynamic style of play and being extremely active in the final third, La Samp’ experienced struggles converting their chances into goals but also stopping their opponents from creating goal-scoring opportunities frequently.

The last team to take advantage of that and trouble their build-up is Napoli. Gli Azzurri scored twice in what turned to be a comfortable game for them. Sampdoria did have their chances too but the lack of creativity up-front and being slightly predictable in their movement ended up with them losing 0-2.

This tactical analysis aims to allocate the flaws in Sampdoria’s tactics and see how Napoli managed to get the three points out of the game.

Napoli went out in a classic 4-4-2 with Alex Meret at the goalkeeping spot, having the support of Mário Rui, Kalidou Koulibaly, Nikola Maksimović and Giovanni Di Lorenzo in front of him. Meret pulled out a strong performance, as well as Di Lorenzo, who was one of the most active players on the pitch and managed to split his responsibilities between defending and attacking perfectly. In a four-man midfield line, Napoli had Piotr Zieliński, Eljif Elmas, Fabián Rui and José Callejón. Dries Mertens and Hirving Lozano would lead the attack.

On the other side, Di Francesco relied on a three-man defensive line of Vasco Regini, Jeison Murillo and Alex Ferrari. He used a 3-4-1-2/ 3-4-2-1 scheme and the midfield included Nicola Murru, Karol Linetty, Albin Ekdal and Bartosz Bereszyński. As an attacking force, he chose Gianluca Caprari, Emiliano Rigoni and Fabio Quagliarella. It all resulted in a troubled build-up and poor connection between the lines.

Sampdoria had some flaws using the back-three. The team would often struggle to structure out of possession and their defensive transition gave a lot of opportunities to Napoli. The Blues were allowed to shoot 25 times. That would be a result of not only Samp leaving gaps and the defenders having wrong timing but also of them being vulnerable under pressure.

Once again Sampdoria experienced struggles holding on to the ball, especially when it comes to winning their aerial duels. They won only five of their 20 aerials which would find them dispossessed.

Most of the times they had to switch to defence, they would only drop Bereszyński back and form a four-man backline. When the team played out of possession, they would avoid the usual five-man defensive line, although it often caused them trouble. As a result of their poor ability to cover depth and being unable to close the gaps, Napoli would enter the box too frequently. The team got only seven of their 25 shots on goal, but that’s only due to the attackers’ precision when shooting.

Samp would try different types of marking when defending. They went from man-to-man marking through zonal-marking to man-oriented zonal marking, but it seems that neither would work as expected. They would often position in squares around the ball carrier (see the images below) but this would commit to many players and allow Napoli more opportunities once the carrier manages to get the ball out of danger. They would overload certain areas but miss out on covering the newly opened spaces. 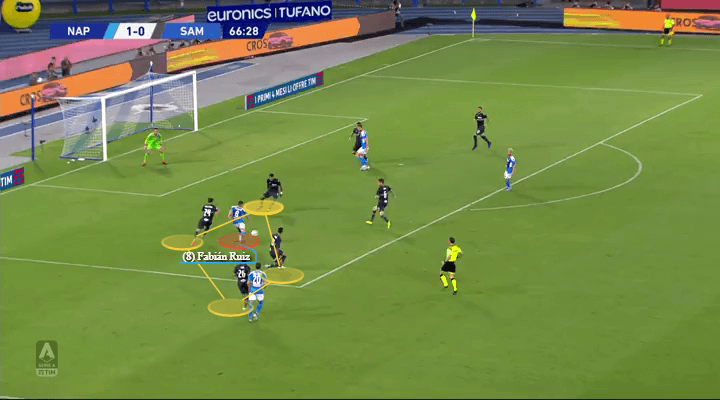 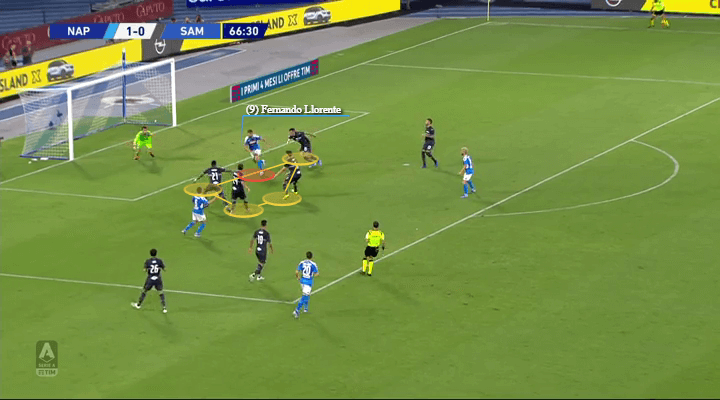 The team would also experience struggles in the build-up. They were barely managing to keep possession and pass freely. The ball often got stuck either between the central-defenders or the defensive midfield. Samp would most frequently use the right flank to form their attacks, but due to the applied pressure, Bereszyński would send the ball internally to Ekdal.

As a result of the troubled build-up, the forward players were forced to drop back and pick up the ball too often, which would affect their performance in the final third. The team’s forward passes would often be unsuccessful and not reach their target. Only 67% of their forward passes were accurate, compared to Napoli’s 82,3%.

Isolating the left-flank and poor finishing

The main problem for Sampdoria when it comes to converting their opportunities into goals is their predictiveness and lack of creativity. Samp sent 10 shots towards the goal but only two of them hit the target. As already mentioned that has a lot to do with their struggles to deliver the ball to the final third, but there are some other reasons too.

Samp would fail in covering wider areas. They would frequently use the right flank to form their attack and then try to drift centrally where 70% of their shots came from. The forward players are lacking versatility. The team would rely on counter-attacks but due to Napoli’s players’ awareness, they would be forced to shoot from long distance which expectedly decreases their chances to score.

They would start off good, using their pace and creating one-touch combinations, but once the ball is in the attackers’ feet, they would fail to convert these chances into goals due to often being pinned down away from the box. Their decision-making and work under pressure need to be worked on.

Another flaw in Sampdoria’s attacking ventures is that they isolate the left flank immensely. The team doesn’t include a few of its players and doesn’t use their full potential.

Napoli were in control most of the time, retaining 67% of the possession. To do that, they were mainly using the centre-backs and the right flank. Using short pass combination and circulating the ball quickly between each other didn’t allow Samp many chances to take control of the game. They would be calm on the ball since Sampdoria would often fail in applying pressure, which resulted in 88,89% pass accuracy for Napoli.

What turned out successful for the Blues is that they would often switch flanks. They would retain possession on the right but use the left flank to create their attacks.

Some of their success in the final third would be a result of them not focusing their striking force in one area. They were firing shots from the left and centrally too, which made it hard for Sampdoria to cover. It was clear, though, that the players were most frequently looking for Mertens to finish the attack, and so did he, scoring both goals for the home side.

Their successful efforts were often a result of strong link-up-play. The player’s connection and off the ball abilities would result in creating some threatful chances in front of the goal. Napoli’s most evident flaw was not a defensive one. They struggled with their crossing. Only two of their whole 22 crosses were accurate, which was partly the reason for them to miss on their chances.

As highlighted in this tactical analysis, Di Francesco needs to come up with a fresh game plan if he wants to stop Sampdoria’s predictability and get them out of the poor performance cycle. Including the left-sided players more frequently might be a good way to start off a change, as this would noticeably increase their scoring chances and give them more options when trying to retain possession and control the game.

Napoli on their side could also work on involving the right-sided players more in the final third, as they sometimes get isolated. If they work on their crossing too, they would convert more of their chances into goals too.