Eusebio Di Francesco’s first Serie A game in charge as Sampdoria’s manager didn’t go to plan. At least partly. They were defeated 0-3 by Simone Inzaghi’s Lazio but the team fought until the last minute and deserve praise. The result surely doesn’t show the whole picture, as seeing it you would assume Lazio were dominating the game completely. That assumption would not be true, though.

The teams offered extremely attractive football in their first game of the Serie A 2019/20 season. Sampdoria and Lazio created tons of opportunities in front of each other’s goal and showed great potential for the upcoming fixtures.lin

What was lacking in Samp, though, is their defensive awareness and a bit more technicality of the attacking players. What gave Lazio’s the advantage, is the presence of a maestro like Ciro Immobile who was the reason for most of their shots and eventually scored two of the three goals.

There might have not been any “grande”, unseen tactics in the game, but there were a few repeating patterns that might have tilted the scales in Lazio’s favour. Besides that, patience, hard work and connection are what brought the Biancocelesti to the win.

In this tactical analysis, we will explain the main tactics behind the game and how both coaches tried to outwit each other.

Sampdoria were lined up in a 4-1-4-1/4-1-2-3 formation with the wingers Gianluca Caprari and Manolo Gabbiadini often switching positions and splitting responsibilities. Quagliarella would constantly stay at the tip of the attack, whilst his fellow attackers would cover wider areas right back to the midfield line.

Lazio’s set up was 3-5-2 when in possession with Joaquin Correa and Ciro Immobile as the attacking pair, which would turn out to be very successful. Sergej Milinković-Savić pulled out a strong performance as a support to their actions and was responsible for most of the teams’ forward passes. The wing-backs Lazzari and Lulić would help a lot with covering the flanks during the build-up, but would also drop back in a five-man defensive line when out of possession.

Despite the result, Sampdoria had a pretty solid performance and a clear strategy. Both teams had a very attack-minded approach and played with high pace without unnecessary movement and passes.

Sampdoria avoided retaining the possession for a long time in the midfield area, and instead used loads of on the flanks and in the half-spaces in order to speed it up and limit Lazio’s time for reaction.

They would proceed the ball from defence into the final third with a few touches mainly using the flanks. Should they meet any struggles passing through Lazio’s defensive players, they would quickly create a combination of short passes and then immediately switch the flank in order to release the press and distribute the ball further.

Samp would rely on movement off the ball and short pass combinations once they reached the final third, in order to drag players out of position and open gaps in the opposition’s defensive line. And so it happened. The team managed to create 15 goal scoring opportunities.

When Lazio weren’t pressing intensively,  Sampdoria would be calmer on the ball and dictate the tempo. In this scenario, the full-backs would go further in order to build-up whilst the defensive midfielder would cover Lazio’s front players. He was used as a support to the centre-backs who would be positioned considerably high. Creating the attacks slowly would give Lazio the chance to create a mid-block which would often get Sampdoria’s attacking players isolated.

Having three attackers, allowed Gabbiadini and Caprari to drop deeper and help to gain back possession in the central areas, whilst Quagliarela is still positioned on the tip of the attack. Gabbiadini and Caprari would rotate and occasionally position next to Quagliarella in order to increase the pressure and give them more options around the box.

This wasn’t enough though, due to Quagliarela often being isolated, Gabbiadini was the player who created most of the shots. Although most of them were on goal, they weren’t challenging enough to disturb Thomas Strakosha.

It was Sampdoria’s defensive awareness that resulted in them conceding three goals. Although their approach of using long balls to pass through the midfield was successful when it comes to attacking, this is what caused them trouble when defending.

They would give Lazio too much freedom in the midfield area. Leaving too much space between the lines allowed the Biancocelesti to reach the final third easily. Sampdoria’s defensive line was compact and was mainly applying pressure in the central areas. This would lead to leaving uncovered areas on the flanks where Lazio would often use their wing-back, Lazzari, to exploit that space and combine with Correa or Immobile on the tip of the attack.

Whenever Lazio felt that they need to act quicker and met too much resistance, the players would frequently use long balls which the defensive line couldn’t defend due to wrong timing. When defending long balls Samp’s central-defensive duo would be the only ones going back quickly. Ekdal would try to offer them support while they structure right but that would not be enough to stop their opponents from creating opportunities due to the technicality of Lazio’s forward players. Despite his attacking responsibilities, Caprari would also drop as a support to the defensive line immediately.

Lazio’s main attribute throughout the game was their pace and attacking creativity. They would perform quick attacks using players’ off the ball movement. They would create disorganization in Sampdoria’s defence, which would often leave Ciro Immobile uncovered and able to shoot. Immobile and Correa would frequently rotate with Milinković-Savić and drag players out of position, which led to the Serbian shooting four times, with three of them being on target. He and Luis Alberto had split their responsibilities well. Alberto would be the connection between the lines and the main player responsible for sending the ball to the more advanced areas, and Milinkovic-Savic would be an additional threat in the attack.

The left central-midfielder Luis Alberto was key contributor throughout the game. Not only did he assist two of the goals but with his 94% passing accuracy, was the reason for the team reaching the final third.

Lazio would often not include their defensive players in the build-up. They would sometimes use the keeper Strakosha to send long balls to the central midfield. This would be extremely efficient due to Sampdoria’s considerably high defensive line, which struggled to defend long balls.

They would often steal the ball from the opposition and quickly form attacks. This would not be efficient every time as the front players often lacked offside awareness. This deprived them of creating even more opportunities.

Lazio were vulnerable against Sampdoria’s player rotations and were often exposed due to their unpredictability using Caprari and Gabbiadini. Thomas Strakosha’s performance should not be underestimated as he was the main reason for keeping the clean sheet. But the defenders played their part in some important moments.

The Lazio players could often be seen defending in triangles, especially around the box and on the flanks where they knew Sampdoria’s strength is. 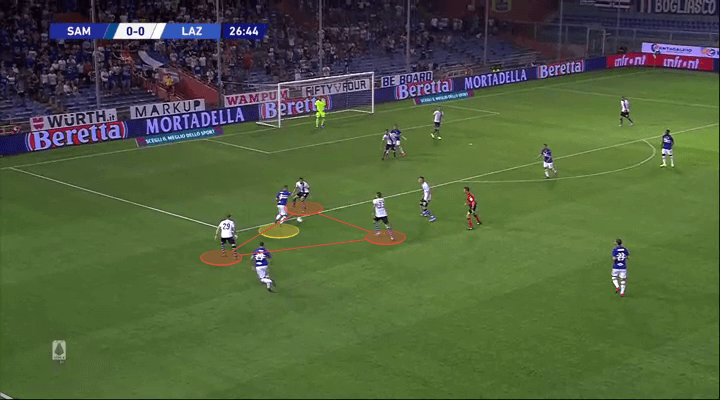 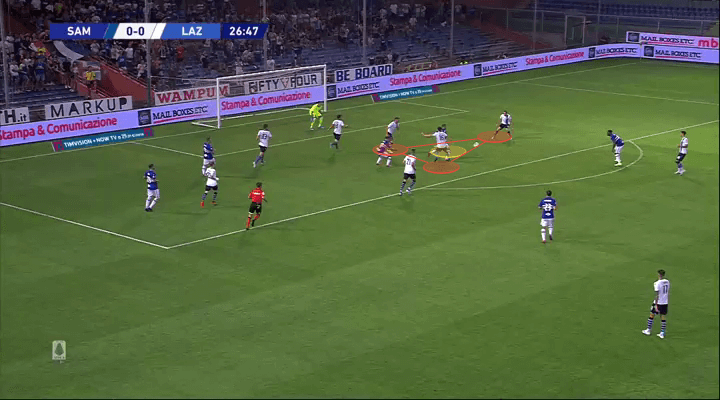 As our analysis shows, the game was full of duels and both teams were continuously limiting the space around the ball carrier. Lazio’s attacking players’ creativity and skills on the ball gave them an advantage, combined with Sampdoria’s late runs during defensive transition. Ciro Immobile’s ability performing the right action at the right time resulted in two goals, and Luis Alberto’s strong performance added to the team’s attacking force giving Samp no chance.