Sometimes, watching rather unknown leagues helps you to find new ideas. Last weekend the game between São Paulo and Flamengo in Brazil’s Série A was one of those games. São Paulo played an interesting system which was highly flexible but rather ineffective. However, as my analysis will show, we could learn one thing. Principles matter more than formations and systems.

Coach Cuca of São Paulo sent his team in an extremely flexible system on the pitch. At times you could describe it as a 3-5-2, 4-3-3 or even 4-2-3-1. They started with Tiago Volpi in goal who played behind Bruno Alves, Anderson Martins and Walce. The latest had a quite flexible role and could change between playing as a centre-back and a right-back. Reinaldo played on the left and was the left-back against the ball. 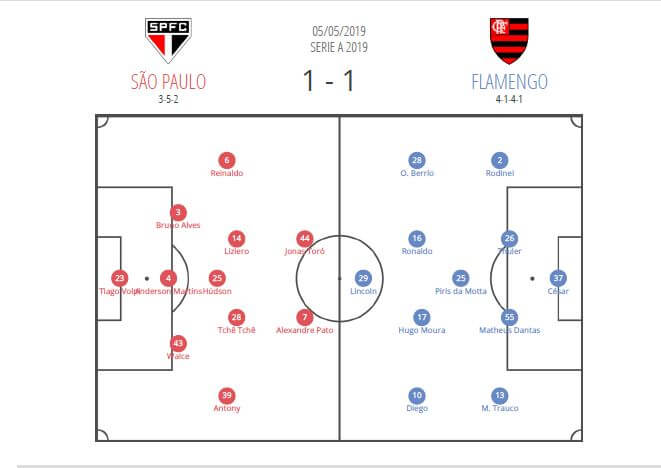 Abel Braga on the other side chose a 4-1-4-1 with César in goal with Thuler and Dantas in the centre, the likes of Trauco and Rodinei playing as the full-backs while Piris da Motta was the only defensive midfielder.

Former Atlético player Diego played on the left side and pushed higher in possession while Moura and Ronaldo tried to combine with da Motta in order to move the ball well. Berrío played on the right side and together with Diego he supported striker Lincoln.

At this point, I don’t want to spend time on Flamengo because they simply attacked in a 4-3-3 with Diego and Berrío quite high up pushing the defensive line deeper, which created space for Lincoln to drop and create an overload in the centre.

Consequently, they created a nice structure with triangles and passing lanes. Compared to São Paulo their spacing was also better and allowed them to get between the lines easily by moving the ball well or moving in the right moment to open passing lanes.

Diego, especially, on the left side had a vital role. When he received the ball, he would often dribble towards the centre. His technical abilities allowed him to create separation quickly. Afterwards, he would try to play diagonal passes between the lines. However, after Flamengo scored by exactly this move, they focused more on staying compact in their 4-1-4-1/4-5-1 rather than dominating the game.

São Paulo and their interesting system

Now the more interesting part. São Paulo’s system in possession showed a lot of fascinating aspects, however, it was not well-executed because certain principles didn’t get applied. So, in the build-up, São Paulo would focus on using a back-three and one defensive midfielder creating a diamond. Sometimes another of the midfielders could drop, however, this was not really necessary against one striker of Flamengo.

As you can see, five players of São Paulo were positioned on the same horizontal line resulting in less diagonal passing and lay-off options. Usually, Alexandre Pato would drop deeper to support, but this was rarely integrated into the system well enough to be effective. Pato would dribble with the ball, however, his teammates didn’t adjust their positioning.

Nevertheless, due to the deeper Pato, a 3-diamond-3 was regularly observable in São Paulo’s midfield. This system usually creates a lot of passing options, triangles and overloads. Due to the poor spacing of São Paulo, this was rarely the case. Nonetheless, there were still positive effects. The extreme overload in the first line allowed São Paulo to stretch Flamengo and they could easily build-up from behind. Here, for instance, the defensive midfielder could easily turn with the ball once he received it.

The advantages of the system

Although São Paulo didn’t execute the system well-enough and their coach changed to a 4-3-3/4-2-3-1 after 20 minutes, the potential advantages were still visible.

One important aspect is just the number of diagonal passing options due to the overload in the centre. If you move according to certain guidelines, your spacing should be good enough to either penetrate or switch to the other side. However, São Paulo often oriented towards the wing or tried to play the vertical pass quickly. As a consequence, they rarely made use of structural possibilities.

Here, you can see the multiple passing lanes which occur due to the number of players between the lines. However, the players are sometimes positioned too close to the midfield line of Flamengo leading to less space and immediate pressure after they received the ball.

Two notable things. One, the centre-back plays his pass too early. If you have space, you should continue the attack in order to make the defence collapse and therefore, resulting in a free man. Furthermore, the midfielder in the centre has positioned properly to be a passing option for a switch. For instance, by passing the ball to the centre, they could use a lay-off pass to the defensive midfielder and then switch to the right side.

Occasionally, it was easy for São Paulo to get behind the midfield line of Flamengo. 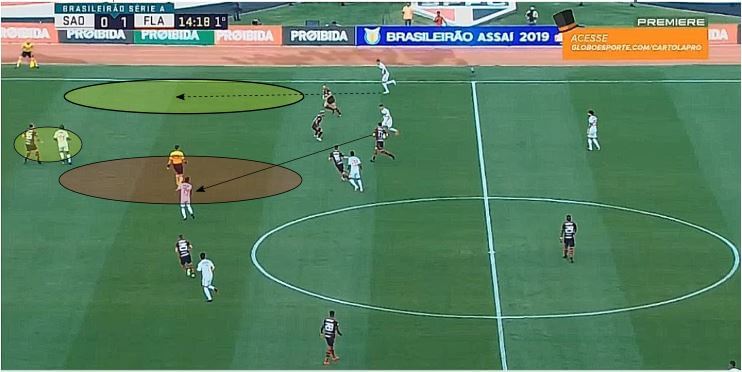 Here, they attract a few opponents by dribbling towards the midfielders while the striker pushes the defensive further behind resulting in an open man between the lines. Furthermore, the right centre-back sometimes acted as a right-back providing width and attacking down that side. In that scene, he supported the attack and used the yellow-marked space nicely.

One of the main issues in São Paulo’s game was the lack of adjustment in terms of positioning once the ball travelled to one side. They often stuck in their initial position unable to create something out of it because the ball carrier got isolated on the wing. This resulted in a lot of ineffective crosses and no goal scoring opportunities. 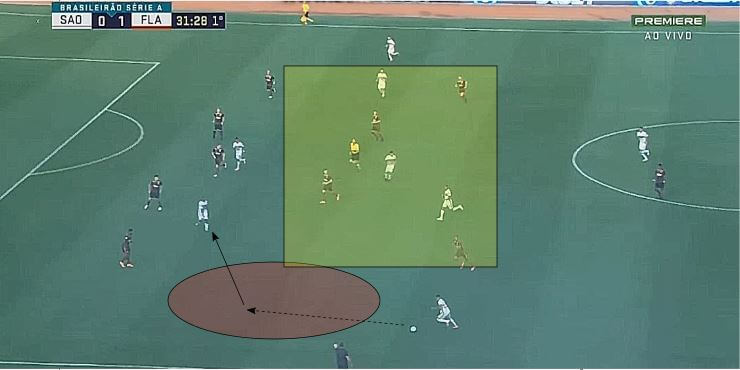 Just take a look at this scene in which the left midfielder moved forward with the ball in the red-marked space. The central midfielders were all positioned on the same horizontal line. Therefore, there was no passing option from the wing to the centre, except the diagonal one to the striker. However, the striker could get isolated by three defenders of Flamengo.

Also in that scene, the player positioned between the lines didn’t adjust his position quick enough, so the ball carrier couldn’t play the ball between the lines. This happened quite often in possession, as a result, São Paulo often had to play through the wings. However, this was no real challenge for Flamengo to defend.

With this tactical analysis, I wanted to show that although a system can lead to certain advantages in possession, the way the players move, positioned and adjust is crucial and more important. If São Paulo is able to implement certain principles of positioning and ball movement, the system could get really interesting. We´ll see if they can develop, nonetheless, São Paulo remains an interesting team to watch.