Thursday night saw the Premier League clash between Manchester United and Arsenal, a game which was anticipated to be Ralf Rangnick’s first in charge,  failed to deliver as work permit issues prevented this from happening. The game was filled with controversy which I will avoid talking about but instead focus on some of the key tactics which decided Manchester United’s 3-2 win. Arsenal came into the game in strong form after a good run of results apart from a 4-0 thrashing by Liverpool at Anfield and was above Manchester United in the table. Manchester United had picked up results since Michael Carrick took over but were still looking for their first home league win since the opening day. Arsenal took the lead early through the controversial Emile Smith-Rowe goal, before a Fernandes goal just before halftime and a Ronaldo strike just into the second half gave Manchester United the lead. Martin Odegaard equalized for the Gunners before fouling Fred in the box to give Ronaldo a chance to give Manchester United the lead and win.

This tactical analysis aims to unpick and analyse the key tactical features which decided the game.

Manchester United made a handful of changes to the team that held Chelsea to a draw last week, Eric Bailly was replaced in the back four with captain Harry Maguire and Wan-Bissaka made way for Diogo Dalot, with Lindelof and Telles staying put. Matic was replaced by Ronaldo, with the double pivot of Fred and McTominay in midfield and Sancho, Fernandes and Rashford playing behind Ronaldo who played as a sole striker.

Arsenal made a couple of changes from the team who defeated Newcastle with Elneny coming in for Lokonga, and Saka making way for Martinelli. Tactically Arsenal stuck with their 4-2-3-1 formation with Martinelli and Elneny coming in as direct replacements. 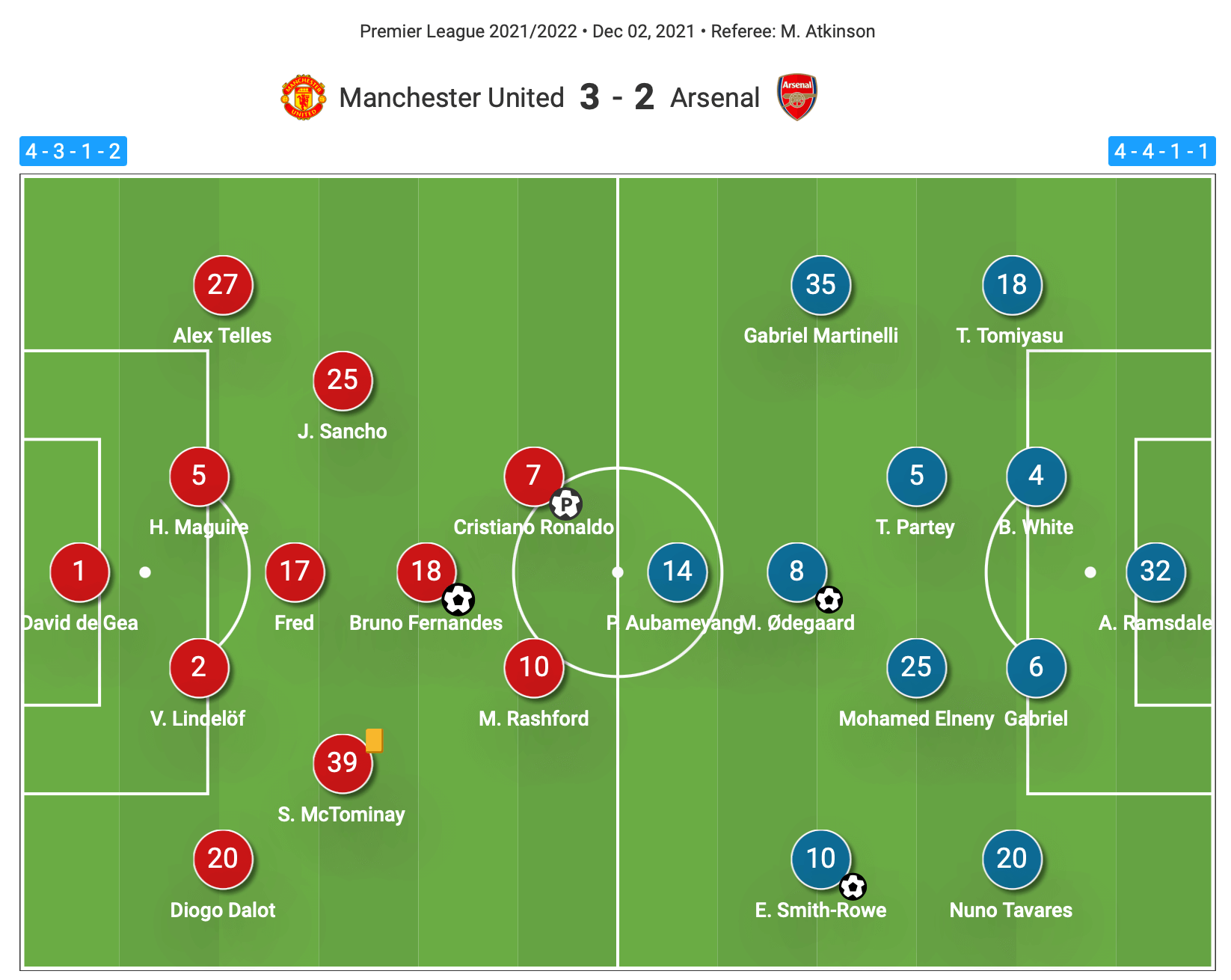 This game wasn’t the easiest game to conduct an analysis of as neither team were at their best, however, a few tactics became apparent and had a significant impact on the final result. One of these was a somewhat questionable build-up strategy used by Arsenal.

Arsenal would set up as if they were going to play the ball out from the back with their centre backs in the box ready to receive the ball however they would either play a couple of short passes then go long or go long directly from the goal kick. This continued to be unsuccessful for Arsenal with Manchester United winning both the first and second contact. Here is a set-up we saw regularly throughout the first half, Manchester United looked to stop Arsenal from playing out yet in this example Ramsdale goes long straight away rather than looking to play out. Arsenal attackers are not blessed with height and doing this lead to Manchester United easily turning Arsenal over. 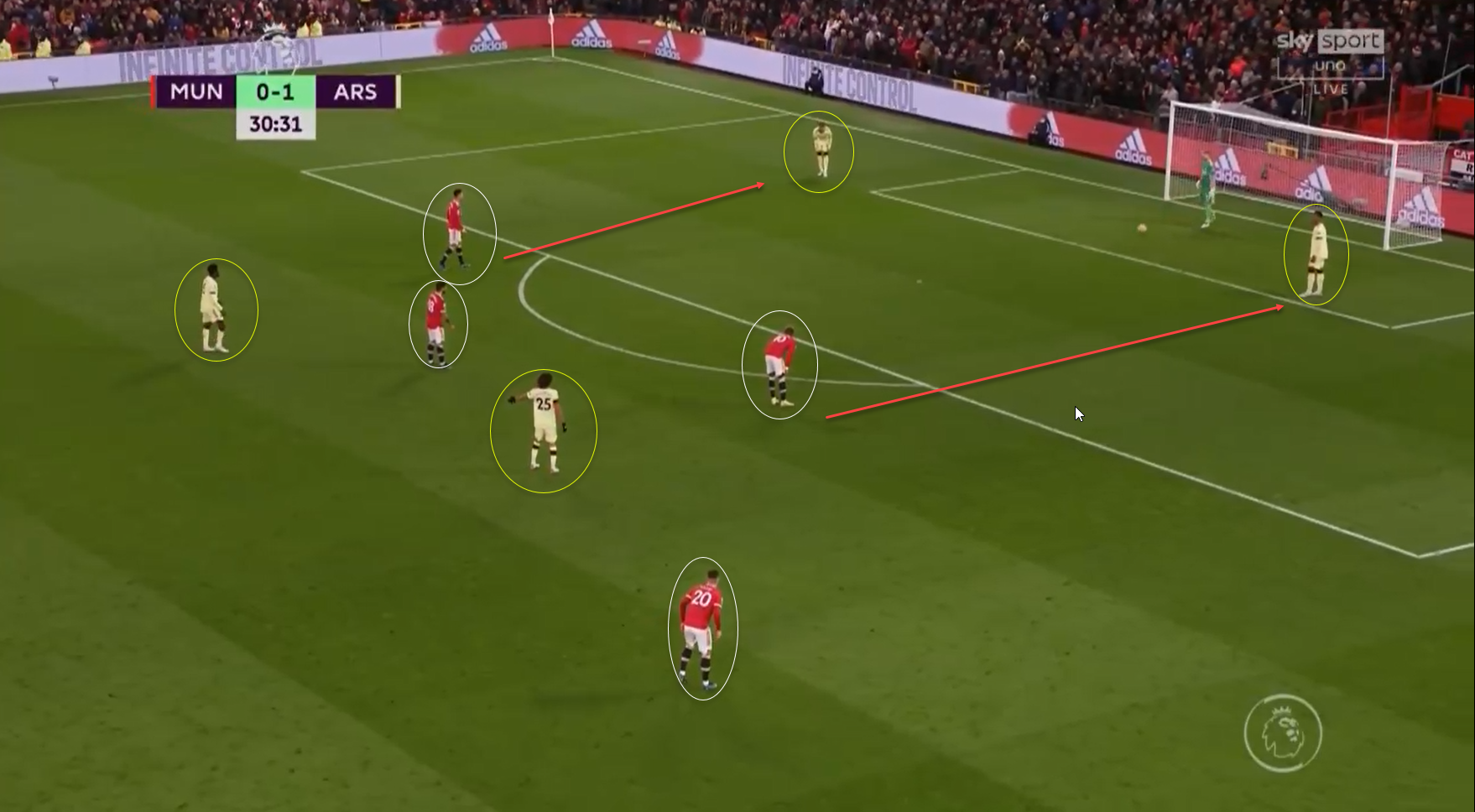 Below is the resulting long ball from Ramsdale which doesn’t leave the Arsenal half and creates an aerial duel between McTominay and Smith-Rowe which McTominay dominates and means Manchester United now have the ball in the opposition half. 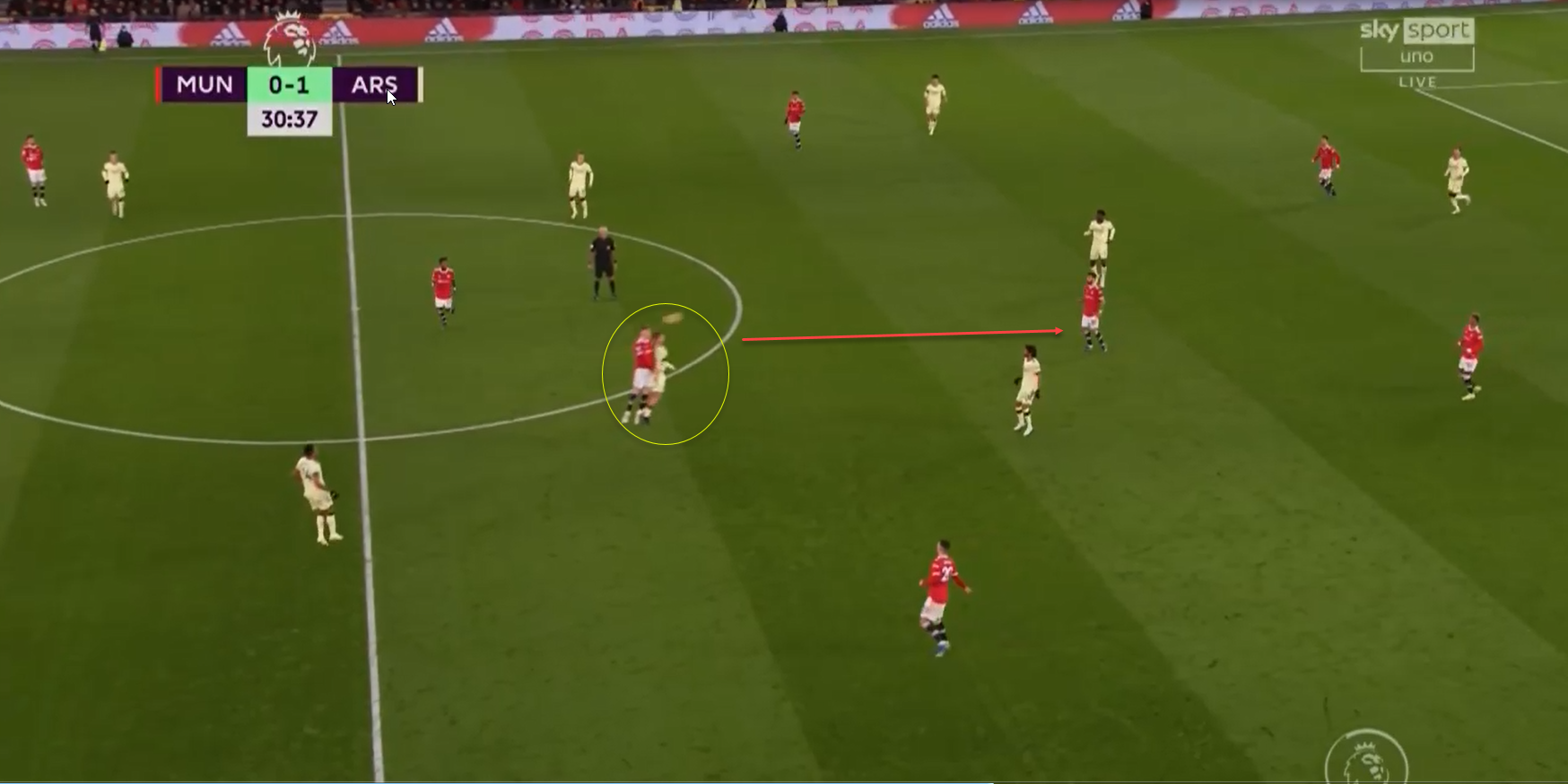 The ball subsequently falls to Marcus Rashford in acres of space and a couple of simple passing options. He chooses to play the ball to Dalot. If he had turned he had a lot of space to turn and get at the Arsenal back four.

If Arsenal hadn’t looked to go short and pressed the back four up the field it would have compacted the space and made winning the second ball much easier and it would have limited the space for Rashford. Where here the two centrebacks have had to sprint out from the 6-yard box and subsequently created significant space. The next example came only six minutes later and the same effect happened again.

This time Gabriel is taking the goal kick with Ramsdale and White deep in the box ready to receive a pass. This is shown below. This time Arsenal were looking to draw out the Manchester United attackers and go over them with a long ball.

They were aiming to draw out the United attackers and create a pocket of space to drop the ball into. However, this failed as Maguire had pushed up to challenge Smith-Rowe. This again leads to a Manchester United United turnover high up the field in the opposition half, in a poor defensive structure.

The build-up play of Arsenal was somewhat confusing due to poor execution and it being something that didn’t suit their personnel. Using long balls to a small set of attackers who don’t excel at holding the ball up and with the likes of Maguire and McTominay in the Manchester United team it made life easy for them. It lead to them struggling to build any attacks in the latter part of the first half and led to Manchester United having wave after wave of attack.

Although he may not be a fan favourite at Old Trafford, Fred had a significant impact on Thursday night’s result. Arsenal were defending in a 4-4-2 with two low blocks which for most of the first half was successful at keeping Manchester United to long-range and ineffective shots. This was until late in the first half when Manchester United managed to break the low block and equalise. After a poor White clearance, Manchester United have the ball in a good position. Arsenal still had a relatively good defensive shape, shown below. They were nice and compact with little space between the lines.

Maguire plays the ball to Sancho who stays wide and draws Tomiyasu out to deal with him. The presence of Fernandes and Ronaldo in the box means White and Gabriel are drawn deep into the box which leaves a significant space in the Arsenal back four. This creates the opportunity for Fred to make a run into the space. This is also made possible by the fact the poor clearance from White meant Martinelli wasn’t in position and therefore meant Partey was drawn out to deal with Telles.

Fred manages to receive the ball in the space and square the ball to Fernandes who is unmarked and he manages to beat Ramsdale to give United an equaliser.

This exact same run led to the foul which led to a penalty and Manchester United’s third goal of the night. Again Tomiyasu had been drawn wide to deal with Sancho and again the Arsenal back four had become disjointed with significant space between Tomiyasu and Partey (who had dropped into the defensive line). You can also see Fred looking to make a run into this space once again. You must question the Arsenal defenders here. This space had been exploited already in this game and they have allowed it to appear once again.

Sancho plays the ball into the space and Fred beats the recovering Odegaard and is brought down to give Manchester United a penalty, which Ronaldo cooly converted.

The Arsenal backline is too deep here, this is highlighted by the fact both Tavares and Gabriel are practically marking each other when Sancho is in the 1 v 1 situation. Something which Arsenal were doing effectively early in the game became a significant disadvantage and an area for Manchester United to expose.

When the ball was in the final third the United attackers showcased clever movements and positional intelligence to create and execute goalscoring opportunities. This was the case for the first two goals where both Fernandes and Ronaldo made clever movements in the box to evade the ball watching Arsenal defenders. For Manchester United’s second goal of the night, they punished Arsenal for a turnover in their own half. Rashford had the ball on the right-hand side. Here we can see Ronaldo looking to make a run for Rashford.

As the ball progressed towards the goal, Ronaldo looked to make a dangerous run. You can see both White and Gabriel are looking at the ball rather than picking up Ronaldo.

He uses this to his advantage to create a small pocket of space in the box which he uses to strike Manchester United into a lead. While making this run he keeps his distance to avoid triggering Ben White into marking him.

The ball is played into Ronaldo’s feet thanks to a good ball from Rashford and Ronaldo sweeps home. Although this is good movement and play from Ronaldo to create this space in the box, you can’t help but criticise the Arsenal defenders for not closing him down and marking him with there being very little other threat in the box. This was a feature throughout the game and was the case for the first Manchester United goal with Fernandes being able to drop off White and slot home.

Arsenal came into this game in strong form and many were anticipating them having a statement game. Yet Arsenal continued to make errors that could be exposed by Manchester United who themselves weren’t at their best. Both Mikel Arteta and the incoming Ralf Rangnick will be looking at improving their sides over the coming weeks but Arteta will be the more frustrated manager as yet again his side fell short against a top-four side. A combination of poor tactics and individual errors played their part on Thursday night. Manchester United showed a ruthlessness to exploit Arsenal and their mistakes – something that has been missing for large parts of the season.