The Premier League is back, with Manchester City travelling to the London Stadium to challenge West Ham United in the first league game of the season. After winning the league for two successive seasons, City are looking for the third league title under Pep Guardiola.

These two teams played against each other in their preseason fixtures. City won the game by four goals to one in China. However, with the arrivals of Sébastien Haller and Pablo Fornals, things could have been different this time around. In this tactical analysis, we will show you the tactical battle between the two teams. 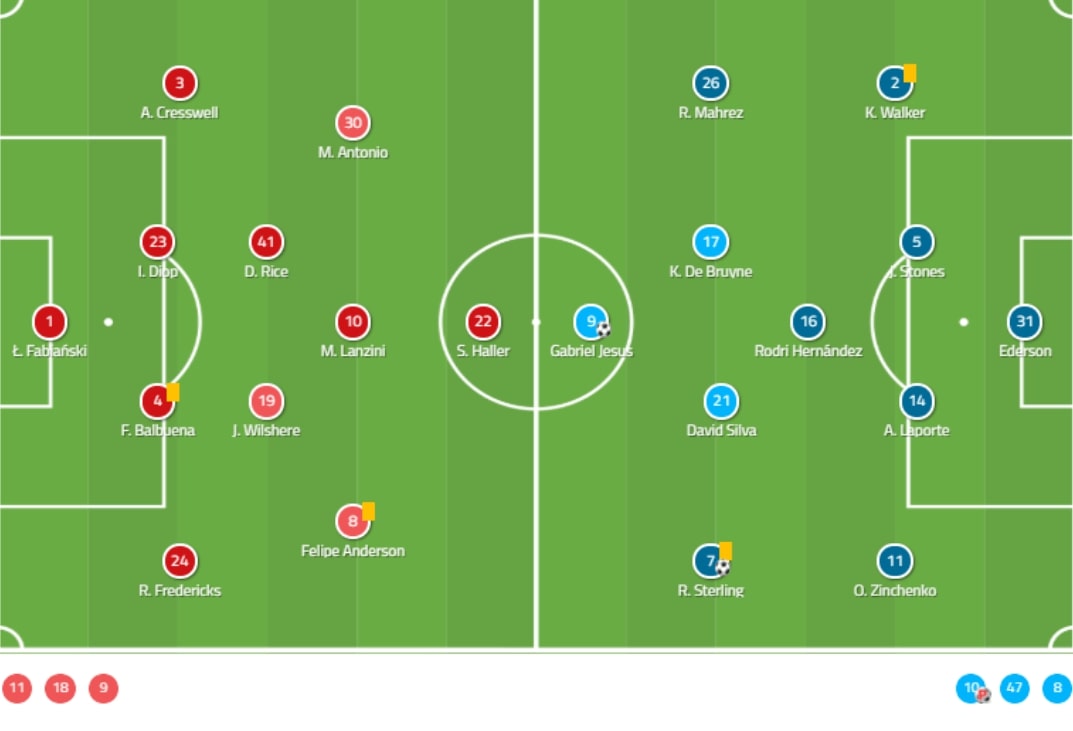 For West Ham, Fornals was left on the bench. Haller started as a target man and he could be the perfect replacement for Marko Arnoutovic. With different styles of attacking players like Michail Antonio, Manuel Lanzini and Felipe Anderson, the Hammers could potentially try more types of attacking plays.

Most of the City starting XI started in the Community Shield against Liverpool. Guardiola only made a few changes to that side – John Stones replaced Nicolás Otamendi, Riyad Mahrez started instead of birthday boy Bernardo Silva, City’s club-record signing Rodrigo Hernández started as the defensive midfielder, while Sergio Agüero was rested and Gabriel Jesus played.

As City winger Raheem Sterling said, the game was difficult in the first half. The situation can be attributed to West Ham’s defence and the City players’ sloppiness. During transitions, Manchester City were unable to create chances since the West Ham players did enough to counter-press. On several occasions, West Ham’s counter-press forced the City players to make a return pass or even won the ball back for the Hammers.

The below image was an example of West Ham’s successful counter-press in the first half. City regained possession and were looking for chances to break. However, three to four West Ham players reacted. Haller was pressing behind Rodrigo while Wilshere and Lanzini eliminated the two closest passing options. As a result, they regained possession high up the pitch. If Kevin De Bruyne could move to the gap between Wilshere and Lanzini earlier, then City might break the counter-press. However, City were sloppy in the first half. Their transitions from defence to attack were slow.

When City progressed the ball upfield, West Ham formed a 4-4-2 block to defend. Their system was a ball orientated one. West Ham intended to compress space at the side and trap the opposition. In the early stage of this match, Lanzini was usually marking Rodrigo. Therefore, City could not link the players via their sole pivot. Since City’s attacking players stayed between the lines, the ball carrier did not have many options.

The below image shows West Ham’s defensive approach. They formed the 4-4-2 low block while Lanzini was marking Rodrigo. West Ham got three to four players around the ball and they enjoyed a numerical advantage on the flanks. Even if the ball could be passed to David Silva, Wilshere and Creswell could still press the Spaniard to force the ball back. This approach gave City a tough thirty minutes in the first half.

City to get into the final third: from side to side

Since Guardiola came to City, he likes to instruct his full-backs to tuck inside to overload the midfield. However, this was not the case at the London Stadium. Sometimes Kyle Walker or Oleksandr Zinchenko had to provide width. This helped City to build-up through the flanks easier. When City could shift the ball from side to side, they could escape the West Ham press and reach the final third easier. This is one of the key tactical concepts of Guardiola: the ball can always move quicker than players. Statistics did not reflect this strength of City.

The three images below illustrate how City built up by switching the ball from side to side. In the first scene, at least six West Ham players were in the left half of the pitch, excluding the defenders; Zinchenko’s positioning dragged Anderson inside. Walker, Rodrigo and Stones formed a passing triangle to give each other options to pass. Since there were two West Ham players pressing Walker, the English right-back could not turn and he returned the ball to Rodrigo.

Afterwards, City were able to pass the ball to Aymeric Laporte. The French centre back got space to drift forward. We should take a look at Zinchenko and Anderson’s positions. The Ukrainian was already hugging the touchline and Anderson was slow to react. Now Anderson must choose between pressing Laporte or marking Zinchenko.

Before the third image, Laporte played a great pass to find Zinchenko on the left flank. Anderson could not delay the attack. In that instant, there were five City players attacking West Ham’s goal while the West Ham midfielders had been eliminated from the play. Zinchenko and City could enter the final third with support on the ball. This was an example showing how City, shifting the ball from side to side, could break the press and reach the final third.

The below analysis explains how West Ham’s attacking tactics allowed them to progress the ball. They tried to keep the ball in their own half to invite City’s players. In the below image, we can see the basic setup of West Ham’s attacking plan. With Aaron Cresswell moving to an advanced position in early stages, Declan Rice, Issa Diop, Fabián Balbuena were staying deeper to ensure there’s enough support. They intended to draw City’s offensive players out and increase the distance between City’s backline and midfield line. West Ham would not insist to build-up on the ground. Instead, they used direct plays to find Antonio and Haller. With the physical strength of both players and spaces generated by the setup, they could progress their attack.

Below was a game situation that happened in the first half. West Ham’s defenders attracted some City players and they played the ball to Haller. Haller controlled the ball from the air and he got space around him since the gap between the lines was huge. Moreover, the French striker got support from his teammates. Lanzini was at the centre of the pitch and Anderson was running forward. If Haller could play the ball to Lanizni, West Ham could have hit City in such a situation. The plan of West Ham was good, all they missed was some inspiring touches in the final third. Poor crosses and passes prevented West Ham from gaining huge advantages thanks to this approach.

Apart from the approach of West Ham, City’s defending was rather passive in this game. Usually, City commit a huge number of players to press high and they intended to win the ball back. However, City did not carry on this tactic and they fell into a dilemma: to step out or to retreat? City’s performance in the first half was not the standard they hit in the last two seasons.

The below image reflects the flaws of City’s defending. Jesus and Silva stepped out to press. Mahrez, De Bruyne and Rodrigo all moved towards City’s right flank to prevent penetration or short passes. However, this left both Rice and Wilshere free at the centre. Also, eliminating the short option at the flank does not prevent the direct play from West Ham. In this case, Jesus did not give Diop enough pressure and the centre back could find Haller with a direct ball. This also affects the transition of City. Since the distance to reach the goal after City winning the ball back increased, City’s transitions were not too dangerous in the first half.

City were better in the second half

Eventually, City managed to secure all three points and put five past Lukasz Fabianski. The huge differences are the speed and rate of transitions. Also, City exploited the spaces between the lines much better.

Here came an example which City did well in the transition to create a chance. City won the ball back and they managed to find Silva quickly. Therefore, Silva could receive the ball with a lot of space around him. He utilized the gap between West Ham’s midfield and defence. Therefore, Silva got a lot of options in this break. He could pass to Sterling, drift the ball towards the goal himself, or even attempt a pass to Jesus. City were able to reach the final third in these transitions after the break. Sterling’s third goal came from this kind of play as well. City improved in the second half.

Given the hard work of Pellegrini’s team, it was a very difficult game for City. Under this circumstance, the quality of the individual became an important factor. In this game, Mahrez shined as he was involved in all five City goals. The Algerian was very useful from a tactical analysis aspect. Statistics showed Mahrez got four key passes and created two big chances.

Everyone knows the magical left foot of Mahrez. With his technique and skills, facing Mahrez one-on-one is always difficult. Therefore, sometimes oppositions commit more numbers to defend Mahrez. Since Mahrez drew the attention of the opposition, it bought time and space for his teammates. His contributions were more than the stats reflected. In the below scene, Cresswell was facing Mahrez alone at first. Later on, Rice also retreated to get closer to Mahrez. In other words, just one Mahrez can draw attention and move away two opposition players. His teammates could take advantage of this. This was also how City scored the opening goal: Mahrez combined with Walker.

For West Ham, it was a very disappointing result for Pellegrini’s team. This tactical analysis mentioned more positives than negatives for the Hammers. There were positives: Haller, Fornals was both exciting to watch. Furthermore, the intensity of West Ham’s counter-press in the early stages; can they sustain longer and organize their press better in the future? Their next opponent is Brighton, a team with a different style of play from this, so maybe we will see something else from Pellegrini’s team.

To sum up, this was not the best game for City. They were sloppy in the first half and struggled to create big chances. They improved after the break and utilized spaces between the lines better to make a decision. When City moved the ball quickly from side to side, they could break the West Ham press and reach the final third easily. Thanks to individual talents like Mahrez and De Bruyne, City were more comfortable in this match. The rough xG sum of West Ham – xG of City was 1.0-3.4. City deserved all three points. However, they have to get ready for Tottenham Hotspur’s challenge in the second game of the Premier League.