The first season under the leadership of Manuel Pellegrini left mixed feelings among West Ham United fans. Expectations were set high after bringing the former Real Madrid and Manchester City coach, along with a record-fee spent in new signings of little over EUR 100 million, according to Transfermarkt.

Felipe Anderson and Issa Diop were their highest targets, plus names as Carlos Sanchez and Jack Wilshere that came as a free transfer formed a decent squad that had high ambitions. But also, first seasons for new coaches tend to be seasons of adaptation, of both the new coach adapting to the club and the club to the new coach.

Compared to their recent history, their 10th place in the last season is not a bad finish. Since 2010/11 season this is their second-highest number of points achieved after the 62-point run they got in 2015/16, according to the image below from SoccerStats. And even after the big signings made at the beginning of the season, they had the 9th largest squad market value of the Premier League, according to Transfermarkt, in line with their league performance.

The 2019/2020 should be the season of consolidation. It is expected from Pellegrini to add an extra collective value that goes further and deeper than the solely individual capabilities, into the tactics of the team. In this tactical analysis scout report, we will go over a summary and lessons of their last season, on how they may approach the coming one.

After starting with four consecutive losses, against Liverpool, Bournemouth, Arsenal and Wolves, West Ham United started consolidating a style of play closer to what is expected from Pellegrini. During the season, the team rotated between 4-4-2, 4-3-3, 4-1-4-1 and 4-2-3-1 formations, establishing the last two as the most common ones during the second half of it. The image below shows how the team used to press when having one sole striker. 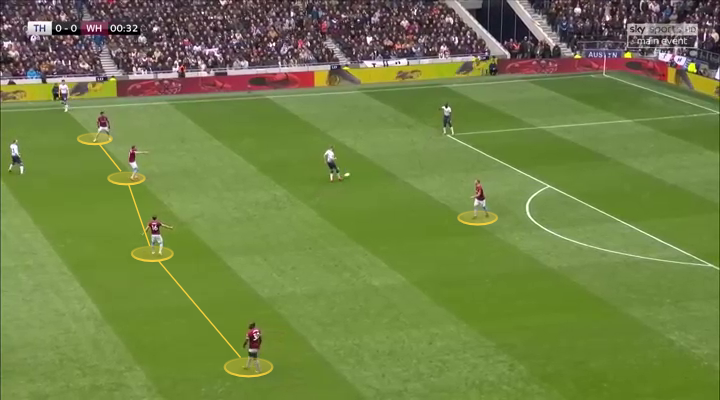 Pellegrini has always tried attacking football, based on possession but not with intense pace, as you would see from a Klopp or even sometimes Guardiola’s teams. He looks to patiently progress, with a high volume of players but slow speed. And expectations were high in that area.

But the team disappointed and didn’t manage to be offensively powerful enough. They averaged 1.37 goals per game vs 1.41 average of the league. Moreover, they failed to score in 14 out of 38 games, only better than three teams in the Premier League. The images below show the stats from SoccerStats.

The productivity of their main strikers was questionable with Arnautovic with his mind out of London Stadium since last season, and Hernandez having a weak seven-goal production in the Premier League.

Defensively it was an unexciting year, but not as disappointing as offensively. The team was several times caught unbalanced when being counter-attacked, and on set-plays, the main weakness was their inability to keep concentration during the whole game. 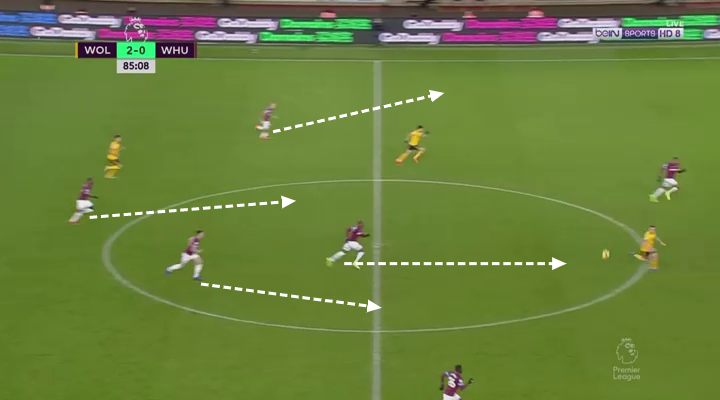 The team conceded 55 goals during the Premier League season, of which 16 of them were in the last 15 minutes of the game, as shown below from SoccerStats. This could be attributed to a mental weakness or a physical one, but there is to improve in that area. 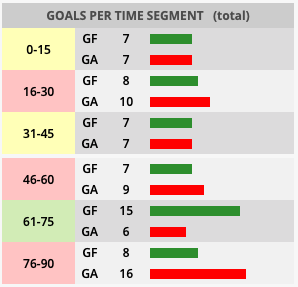 In summary, it was an uninspiring season in terms of football quality deployed by the team, but with the caveat that it is a team that was under a new manager, with a new style of play and now with a full season of football on them to deploy a more competitive level.

By the end of last season, West Ham knew Marko Arnautovic was leaving the club. Andy Carroll is also on his way out, Lucas Perez was sold to Alaves and Samir Nasri left on a free transfer. Add to that a disappointing offensive performance last season and you knew the focus of transfer arrivals would be on the offensive side.

Pablo Fornals was the first player they bought from Villarreal. An attacking midfielder, the 23-years-old can play across all the attacking front, on both wings and in the middle. He is tactically very smart to receive the ball with enough space to have that extra second that allows him to make better decisions on passing. The image below shows Fornals stepping back to the space between the defensive line and the midfielders, to be able to receive with spaces. 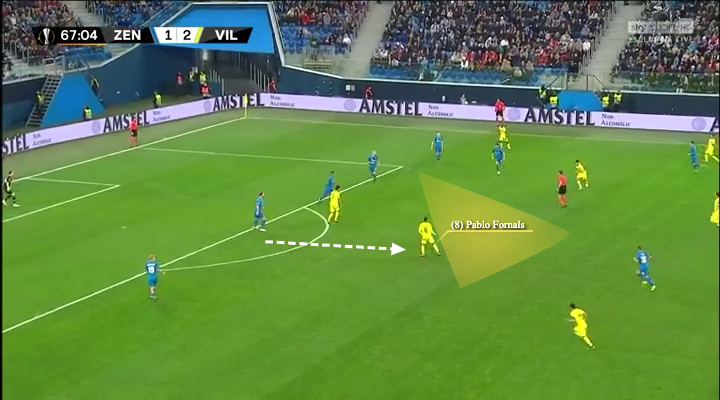 He also plays well in tight spaces, attracting opponents to his position while freeing spaces for his teammates with the ability to get the ball to them.

He also has excellent space and time sense, with several times waiting for the exact moment to launch long and through passes to leave his teammates with more space or speed advantage against his rivals. He will add versatility to the attack especially with Felipe Anderson as right attacking midfielder, their connection could prove very useful.

Just this week, the team announced the incorporation of Sebastien Haller, as their new striker. The 25-year-old French comes from a good season at Frankfurt, where he scored 15 goals and provided eight assists in the last Bundesliga season.

This has the potential to be one of the best transfers in the season. Haller is an unusual player. He is 190cm high and he has a very good aerial game. Last Bundesliga season he had 14 aerial duels per game and won almost half of them. For a striker that is a good statistic.

But he is also very technical. Not being especially fast, his technique allows him to play far from the rival’s goal area giving continuity and fluidity to the offensive build-up. This combination of good aerial game and technique is very useful, as usually forwards that move back closer to the middle to win aerial balls, tend to be left behind in the offensive move. And if they are not technical enough, they can only be useful again when closer to rival’s goal area.

The sequence below shows Haller winning an aerial ball and then continue with the attack and finally finishing himself the play. 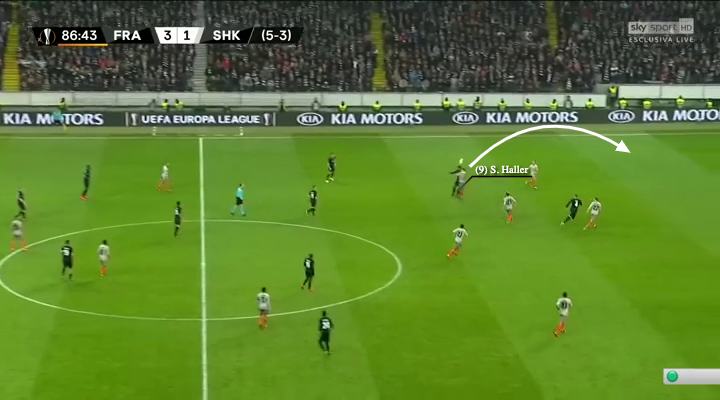 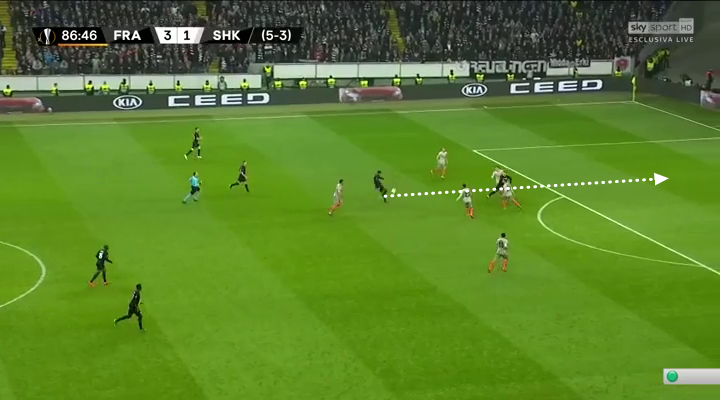 In the case of Haller, he can reconnect fast enough with the midfielders, having decent dribbling and passing abilities. This also allows him to move wider to receive the ball with more spaces if the ball is won in the middle. Add to that he is very opportunistic and is quite cold-blooded when in front of the goalkeeper.

Still, some more players should be part of the analysis as potential signings to the Hammers squad. At least two more midfielders, Chilean Charles Aranguiz, currently at Bayern Leverkusen has been named as a candidate the team is following. Plus one or two names on the defensive line, technical enough to help in the build-up, should be what Pellegrini is hoping to get for the current season.

As the team is forming the expectations of seeing less a 4-4-2 formation and more a 4-3-3, 4-2-3-1 or 4-1-4-1 are higher. The three latter formations share the fact of having one central striker with two players coming over wide through the wings.

With Felipe Anderson, Jack Wilshere, Pablo Fornals, Michail Antonio and Manuel Lanzini as useful players in the attacking midfield roles, Haller could the potential sole striker and with Chicharito Hernandez as a good substitution. If playing 4-4-2 those two players would form also a strong pair of strikers.

The image below shows a potential lineup with a 4-2-3-1, where the offensive looks quite strong and leaving excellent players in the bench. 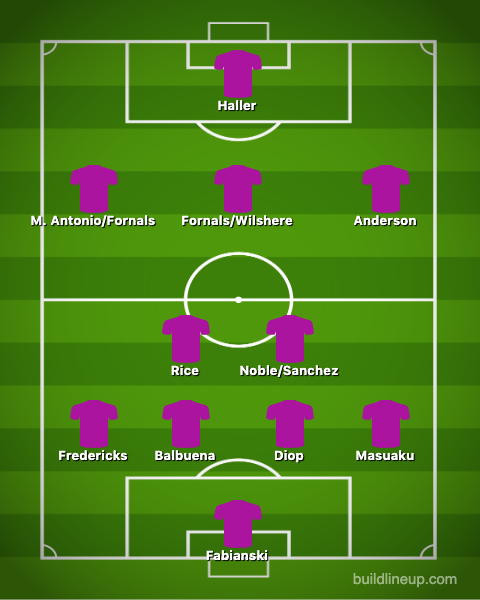 Also, Jack Wilshere is part of the squad but has had several physical problems. If he can overcome them, he could be a very useful player in the middle, with his high technique and excellent use of his body to take advantage of his rivals.

Although Felipe Anderson and Lanzini could be more vertical players, Fornals and Wilshere as midfielders and Haller playing facing back to his teammates as a pivot could help Pellegrini achieve his possession-based football. He will have good technical quality and the ability to increase the speed of the game either with Anderson ability or with Fornals smart passing.

Behind this strong offensive pack, the defensive midfielders should be the first line of offensive support. During the last season, the passing map shows that the average position of West Ham’s striker was very close to the middle of the pitch. And the team needs to be as a whole positioned higher, relying less on individual performances and more on the collective front.

The image below shows the average positioning of a random game of the last season of the Premier League. This was the common figure on West Ham games, with the striker far from the rivals goal area and a long team with large passing distances. 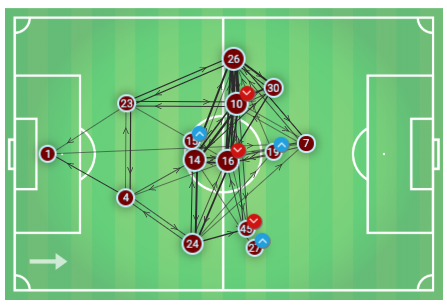 Young Declan Rice was a good surprise, but there is space there for someone that can move more vertically, pushing the team higher and breaking the rival’s defensive line looking to gain numerical superiority.

Also, considering Pellegrini’s style of play, we should expect more participation of the defensive line in the offensive and build-up phases, especially of the wing-backs. Both Diop and Balbuena have proven to be good partners as central defenders, but an offensive-minded wing-back could prove a good signing to achieve this objective.

The image below shows Malaga under Pellegrini, where he also played with a 4-2-3-1, with one defensive midfielder participating in the attack a wing-back as support. 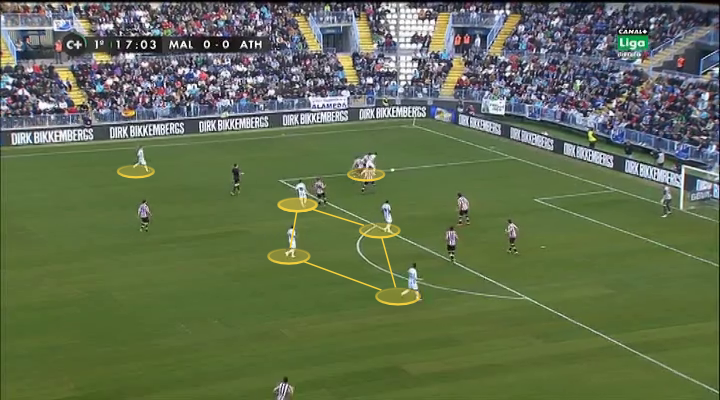 This will not be an easy season for Manuel Pellegrini. There are no excuses not to fight for a top-6 position to enter a European Cup. Although there is still space for new signings, especially a central midfielder and a wing-back, the squad potential has increased quite a bit the last two seasons.

Tactically the team showed some progress last season, but there was a lack of consistency in their performances, that need to be addressed. With a strong offensive squad, the defensive cohesiveness must be even higher, as teams that are attacked less need to keep the concentration level up for when they are attacked.

If Pellegrini can incorporate his style into the team, West Ham could be one of the surprises of this season’s Premier League. He did it before in Villarreal and Malaga, maybe London Stadium his next stage.