The last day of Premier League action gave us the epilogue of the battle for Champions League places, as well as a dramatic denouement of the relegation clash. Both Chelsea and Manchester United secured their spots in the most prestigious European competition by beating their direct competition to the top spots – Wolves and Leicester respectively. Aston Villa managed to stay up in the competition, getting a draw against West Ham while Bournemouth’s win over Everton wasn’t enough for the Cherries to stay afloat.

Despite the fact that a lot of sides having everything to play for on the last day, it wasn’t the case for Newcastle and Liverpool this season. Both teams secured their table ambitions early, and so this match presented some opportunities for both coaches. For Liverpool, it was a chance to give some players with little playing time an opportunity to show themselves. For Newcastle, they could finish off the season strong with a positive result over the undoubted champions.

In this tactical analysis, we will examine how Steve Bruce’s tactics created a headache for Liverpool in the attack, and how the attacking change for Liverpool played a huge part in their dominance at the end of the game.

Steve Bruce only made one change since the outing against Brighton: Manquillo made way for Lazaro in the right wing-back spot, with the Spaniard playing as a right-sided centre-back in this game instead of Krafth.

Jürgen Klopp was more ambitious with the changes in the starting lineup, completely reshuffling the attacking trio with Minamino, Origi, and Oxlade-Chamberlain coming on instead of Firmino, Mané, and Salah. The midfield has also undergone some changes: James Milner started the game instead of Fabinho, while Keïta and Wijnaldum started the game together for the second time in a row. The youngster Williams replaced Alexander-Arnold in the right-back spot. 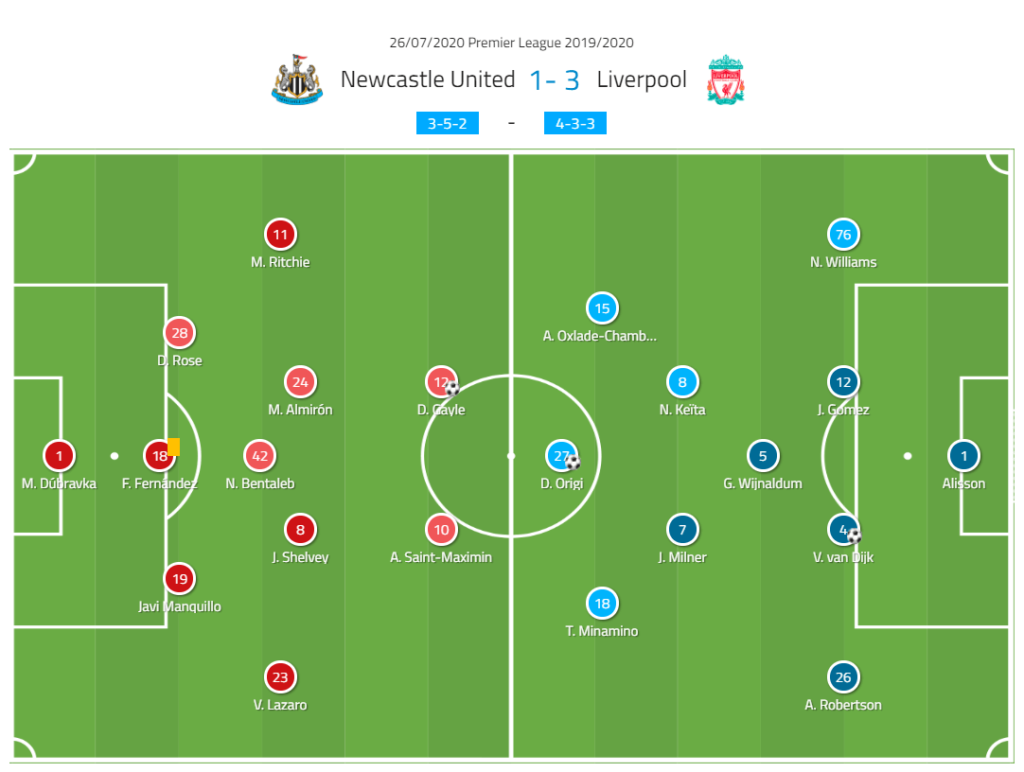 Liverpool had the ball at their feet for 70% of the game, but in the first half, the visitors struggled to create anything meaningful out of it. Newcastle took the lead early on into the game, which gave them the opportunity to play their preferred style of football against big teams – defending in a low block.

Newcastle were defending really deep, with their strikers entering the defensive third when Liverpool were in possession. The first line of pressing in Saint-Maximin and Gayle were pressing Van Dijk and Gomez, while at the same time they were trying to cut the passing lanes to Liverpool midfielders. The midfield and defensive lines of Newcastle were very aggressive without the ball, immediately pressuring the receivers, even if it meant stepping out of their line.

Newcastle’s deep defending meant that the initial build-up phase was easy for Liverpool, and the centre-backs barely had any pressure on them, especially in the first half. The problems were arising when the visitors entered the attacking third, where Newcastle players tried to win the ball back. 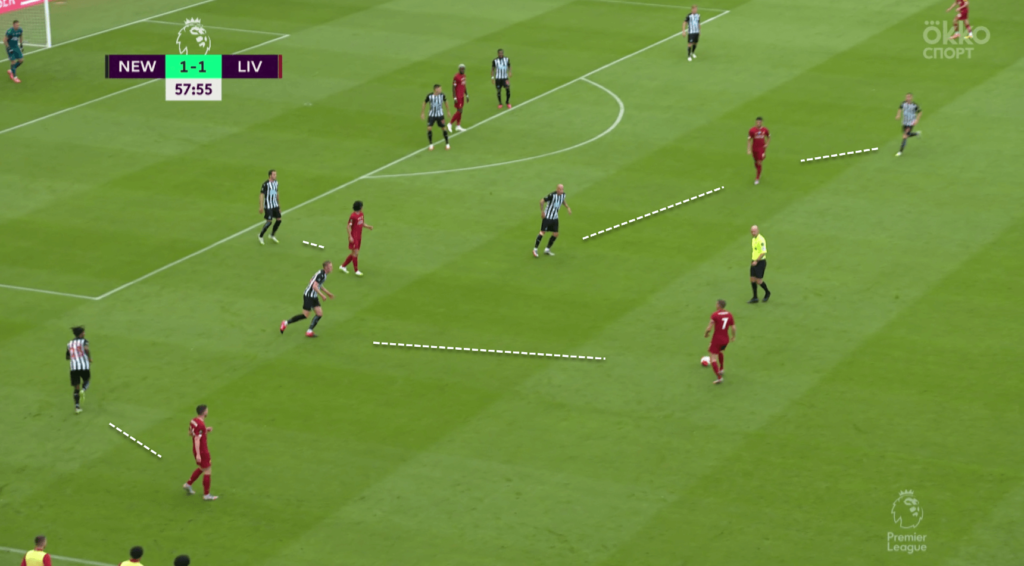 Despite Liverpool’s nominal 4-3-3 formation with the midfield three of Milner, Wijnaldum, and Keïta, in-game it was transforming into 4-2-3-1 with Milner and Wijnaldum in a double pivot, while Keïta was playing higher up. You can see the basic shape below, and in the next paragraphs, I will outline a few problems that Reds had in possession. 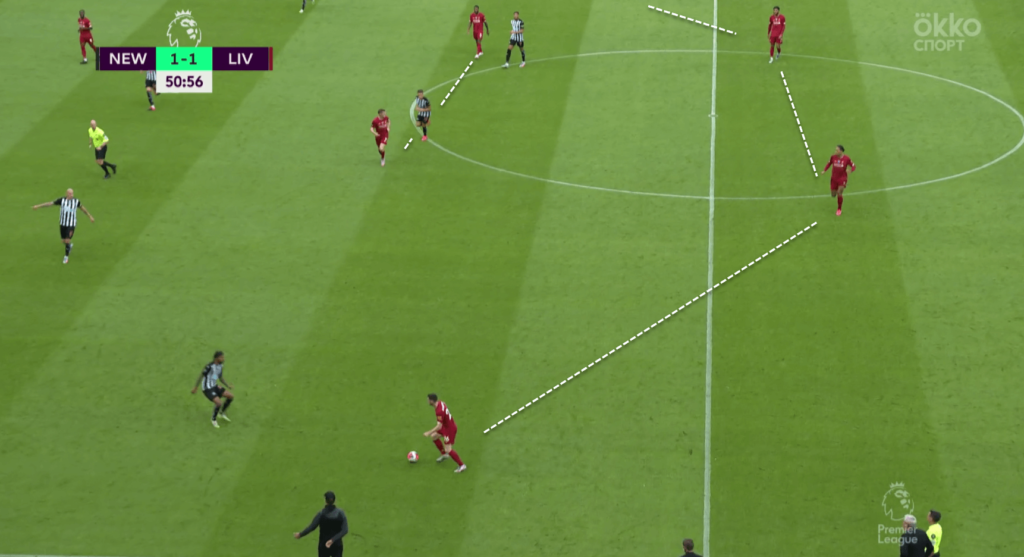 The first pattern in the attack that we saw from Liverpool this Sunday was Milner forming a situational back-three with VVD and Gomez. This was the major issue for Liverpool in the build-up in the opening period. Firstly, Milner taking up the role of a left-sided centre-back created a disbalance in Liverpool midfield, as Keïta was tasked to play higher and Wijnaldum couldn’t contain the ball progression in the midfield on his own. Here you can see the Dutchman as a lone pivot while Liverpool also have a big incline towards the left side of the pitch, and Gomez was the one getting the ball up front on the right side with his runs. 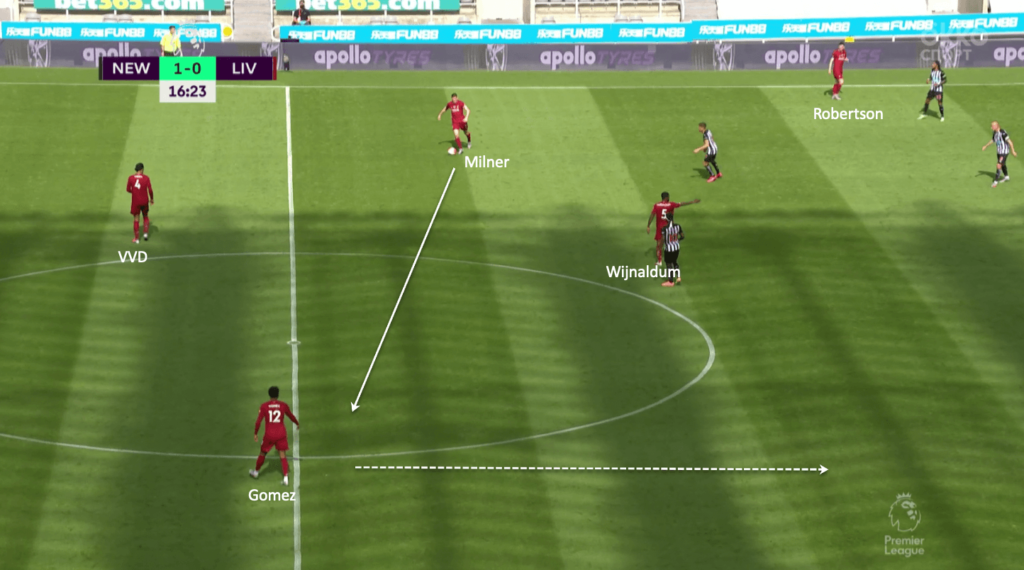 Secondly, Milner was almost always in the same vertical channel as Robertson, and that was hurting the attacking structure and making life easier for Newcastle. Instead of providing more options in the centre or pushing upfield, the midfielder was creating an unnecessary additional passing lane between Robertson and Van Dijk, because the Dutchman wasn’t positioning as a central player in a back-three. Here, Milner stays close to Robertson, and the left-back doesn’t have his usual option in the centre that Wijnaldum would normally provide, so he has to play the ball back to Milner. 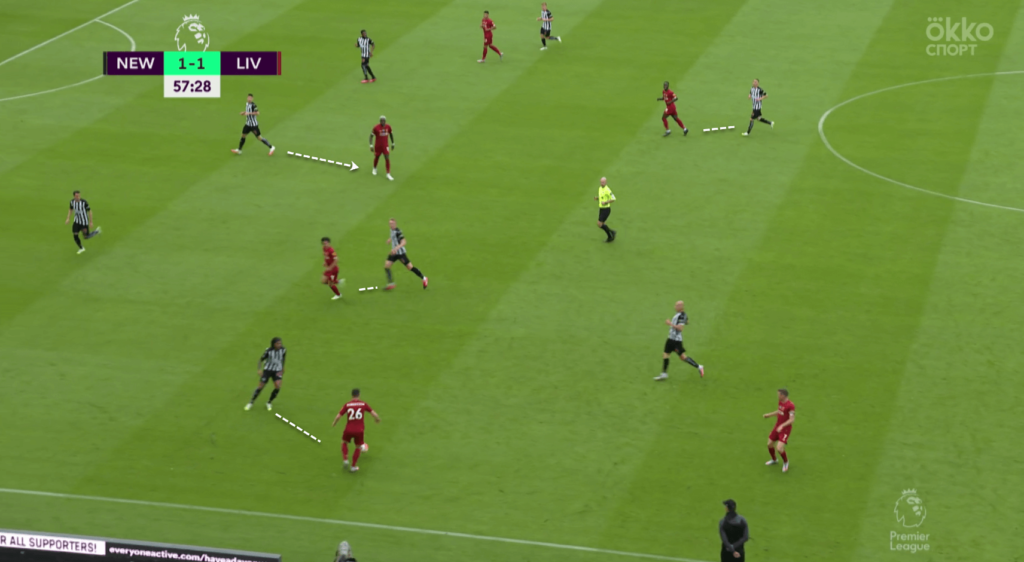 Apart from Milner dropping as an additional centre-back, Liverpool had a variety of other positional rotations that were supposed to create havoc in Newcastle’s defence. The attacking trio of Origi, Minamino, and Oxlade-Chamberlain was fluid and the players free roamed in the attacking third, providing options. Here, Minamino drops to the left to create a passing option for Robertson. However, after a pass to Minamino, the back pass immediately follows, and that was the case throughout the game with this attacking group.

They were all good at providing options and their movement in the final third was great as well, but they lacked the trait that the main set of Liverpool attacking players has. All of the Origi, Minamino, and Oxlade-Chamberlain were shy to take on opponents and progress the ball themselves, like Firmino, Salah, or Mané would do. Only Keïta showed this out of all attacking players, and I think the lack of aggressiveness and directness in the final third was the main cause of Liverpool’s futile time in possession. 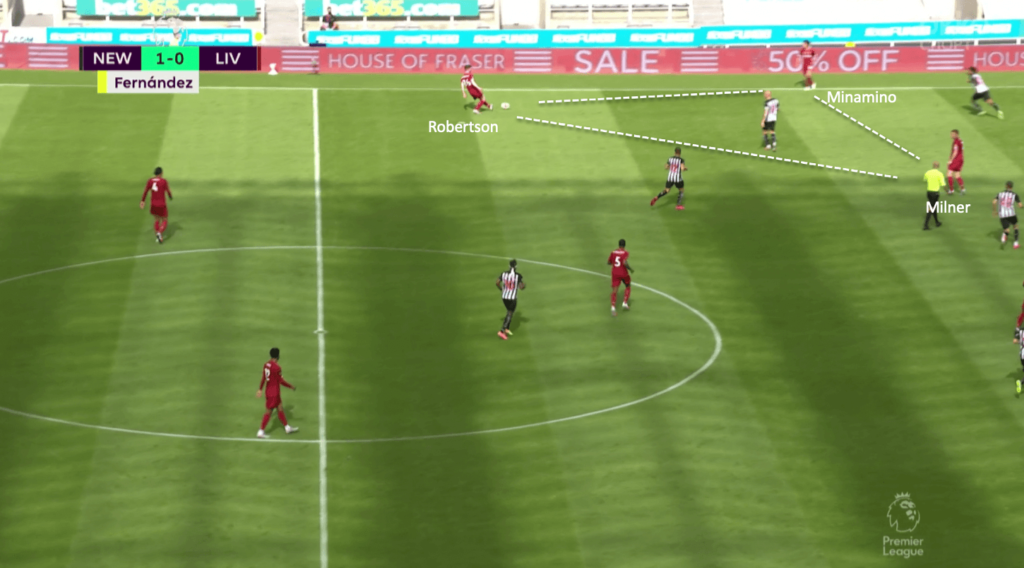 Liverpool performed a wide rotation on the left flank just as they did in the game against Chelsea, with Robertson pushing forward. Milner was taking his place in the backline, and in the image below you can see one of the instances of this happening, where Newcastle’s aggressive defensive positioning could’ve been exploited. 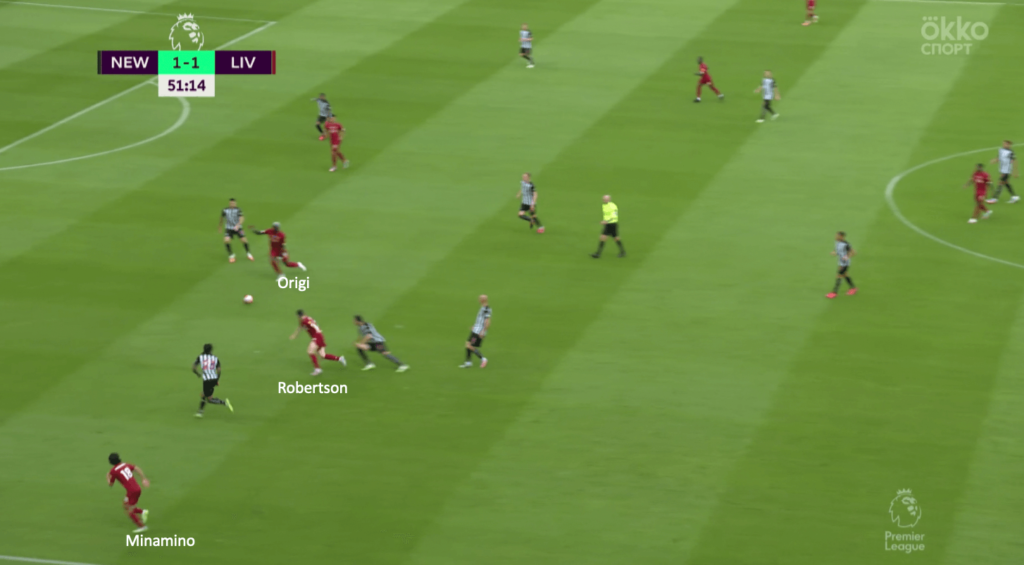 Liverpool didn’t do much with their possession of the ball, and only Van Dijk’s great header got them back into the game.

Aside from the goal in the first minute, Newcastle United haven’t really shown any obvious signs of attacking football in this game. The main way of getting upfield for the hosts were the long balls, primarily through the left flank, with 56% of Newcastle’s attacks coming from that side. Long balls behind the defensive line worked relatively well, compared to long balls that were targeted towards the centre – the centre-back partnership of Liverpool dealt with those in an excellent fashion, leaving no chance for Newcastle strikers to retain possession.

During the rare periods of stable possession (for instance, around the 56th minute), Newcastle were unable to create anything meaningful. Joelinton was dropping deeper to help get the ball further together with Almirón and Rose on the left flank, but the lack of help in the final third from other Newcastle players left the hosts with no real chances in the second half.

Regardless of the overall result, however, it is worth mentioning that Newcastle chose to press higher up the pitch and more aggressively in the second half. In the following section of this match analysis, we will see how Newcastle’s change of attacking strategy and Liverpool substitutes opened the game up.

Firmino, Mané, and Salah all came on in the 64th minute and completely transformed the attacking game of their team. Their individual brilliance was the main reason for Liverpool’s dominance in the closing 30 minutes, with a handful of chances being created. Both Salah and Mané were positioning in the half-spaces to receive the ball, while Firmino did his usual job of dropping deeper to get the ball and exchanging passes with both wingers to set them up with great chances.

The substitutes did what the initial attacking group couldn’t – get the ball and then drive towards the opposition goal. The defenders were stepping out as they did in the first half, however, with the individual ability and speed of the front three, it turned out to be a disaster. The Newcastle defence couldn’t cope with continuous runs in behind from these three players, and all of them got their 1 v 1 chances against Dúbravka. Here, after Salah receiving and playing a one-two combination with Firmino, two defenders are taken out, while Fernández is caught ball-watching, and Mané gets in behind. 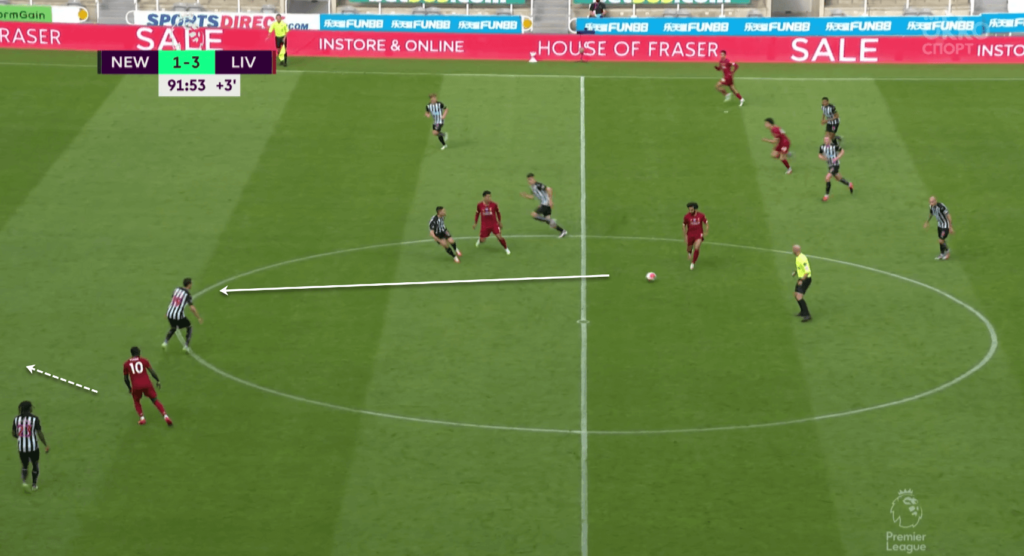 This last game of Premier League season was very similar to the first encounter of these teams back in September. After Newcastle took the early lead thanks to the impressive strike from Jetro Willems, the future champions had to come back with the Mané and Salah being the difference-makers. Liverpool capped off a season with a win over a great opponent, who steadily held his ground despite conceding three goals.

The struggles of the front-three in the first 60 minutes of the game can give Jürgen Klopp some food for thought regarding the reliability of available attacking options going into the new season. Newcastle United, on the other hand, have a great chance of a takeover which can happen this summer, and which could be a catalyst of a squad rehaul. The transfer window is open, and it’s intriguing to see how each team can strengthen their squads before the new Premier League season, which starts in September.