In this Premier League matchup, Brighton travelled to Leicester, both of whom experienced injury-time drama in their previous fixtures.

Brighton stole a victory against Arsenal, moving the South Coast club onto 32 points, further away from the relegation zone. Leicester were on the receiving end of the drama, conceding a late equaliser at vicarage road, bringing unwanted attention from the chasing Champions League hopefuls.

In this fixture, however, it was clear the drama had run out as both sides battled it out in an underwhelming goalless draw, achieving a combined an xG of just 1.97. In this tactical analysis, we look at the tactics used by both sides, discussing why the game ended goalless.

The home side lined up in an unfamiliar 4-4-2 system. James Justin continued his string of appearances as a right full-back, as Ricardo Pereira remains injured. Chelsea target Ben Chilwell occupied the left flank as the pair were given license to advance by the use of a double pivot. This was made up of Nampalys Mendy and Wilfred Ndidi, as the pair started their first game together under Brendan Rogers. Jamie Vardy and Kelechi Iheanacho partnered upfront for the foxes, with the English striker still looking for his 100th Premier League goal.

The visitors true to form, matched Leicester in their usual 4-4-2 system, a shape they’ve used 25.2% of the time this season. Youngster, Tariq Lamptey started as the right full-back, where he was impressive in moving forward to support Aaron Mooy on the right flank. Dale Stephens and Yves Bissouma were given the job of marshalling in a central midfield role. The pair remained deep, reducing the space between the lines in order to protect their centre-backs. Aaron Connolly and Neal Maupay paired upfront for the Seagulls, rotating between dropping off and running in behind to stretch the Leicester centre-backs.

In the early stages, the game was played at a good tempo, with both sides competing for the ball all over the pitch. Once the initial enthusiasm wore off, the game fell into its natural pattern. This centred around Leicester controlling the football. The Foxes dominated possession, averaging 62% across the 90 minutes.

In possession, Leicester used a slower tempo build-up combined with shorter passes to patiently dictate possession and build through each phase of the pitch.  In the early stages, Kasper Schmeichel combined accurately with his centre-back pairing, in an attempt to draw out the rigid Brighton shape.

Once in possession of the ball, Johnny Evans and his partner Çağlar Söyüncü looked to link with the double pivot who rotated on an axis, dropping deeper to collect possession. When these passes were not available in general possession cycles, one of the midfielders dropped even deeper to create a centre-back trio. This movement released Justin and Chilwell in the channels, allowing them to advance aggressively. We can see this from the passing map shown below.

During the early stages of possession, the attacking unit stayed narrow, which condensed the defensive unit of Brighton. This pried open the space for the full-backs who as we can see were well connected in the middle phases of the pitch.

From this point, Leicester sought to connect with their attacking unit by playing square passes inside from either full-back or looking into the channels for offensive movements made by the striking pair.

As we can above, however, that possession often became too contested as the narrow shape of Brighton often plugged the gaps once Leicester committed to a side to attack down. Notice above the density of possession losses occurring on both sides, and how this impacted the connection with the advanced players on the passing map above.

Out of possession, Roger’s men were active in their attempts to regain possession. The Foxes averaged a PPDA of 7.5 across the 90 minutes, with highs of 4.2 in certain periods. This high press was spearheaded by the pace of Vardy and Iheanacho, whose relentless running forced Brighton into longer passing routines, meaning an increase in turnovers of possession.

As we can see from their recovery map, the Foxes high-press didn’t yield too many turnovers of possession in dangerous areas. Instead, it forced Brighton into rushed passes, which were easily cut out in deeper zones by the Leicester centre-backs through either good positioning or aerial duels.

The next section provides an analysis of Brighton’s tactical blueprint.

Brighton arrived at the King Power Stadium with a gameplan that was immediately apparent. In the early stages of possession, Brighton looked to play direct passes into their offensive pair. These balls varied between passes over the top, looking to release players in behind the opposition line and progressive passes that had the intention of conjuring attacks from knockdowns and second balls. The visitor’s pass length averaged 21.6 metres across the 90 minutes and their passes into the final third averaged a whopping 34.3 metres.

This is emphasised by the pass map of Brighton, which shows little preference towards a particular passing routeway in their possession cycles. Instead, they opted to go long, which resulted in the Seagulls creating their best chance of the game, shown below.

We can see in the sequence above how Brighton are being pressed intensely in the middle third, making it near impossible to play short passing football comfortably. Instead of taking unnecessary risks when situations like this arose, Brighton’s strikers worked in tandem to breach the high Leicester line. One would drop deeper, pulling the line further forward and the other in conjunction with this penetrated the line with a deep run – seen above. Though low percentage – Brighton’s passing accuracy was just 79% – the few times it was successful yielded dangerous opportunities for the visitors.

In the above, Connolly has timed his run and been played in behind, forcing the defender to make a desperate recovery tackle, which is mistimed and wins the penalty. Unfortunately for the visitors, the penalty was wasted and they blew a golden opportunity to steal the points.

Out of possession, Brighton were organised and resilient. They used their 4-4-2 system to match the opposition all over the pitch by highly concentrating dangerous areas in their defensive third. This was done by condensing the space between the lines, starting with a deep attacking pair – often inside their own half – and finished with a deep defensive line. This low-block stifled Vardy, who struggled to find space in the match. The Englishman managed just eight touches in the first half.

Above is a picture which demonstrates the low-block implemented by Brighton. Notice how narrow the back four have become, defending inside the width of the penalty area. This restricts the space available to Leicester’s forwards and forces the ball into space – out wide.

When this pass was played, which was a lot (Chilwell and Justin received 121 passes between them), the Brighton unit shifted laterally. This involved the respective winger and central midfielder moving with the striker to create a defensive overload in the channel, stifling the attack. The defensive line stayed deep and narrow, protected by the moving structure ahead of it, demonstrated below. 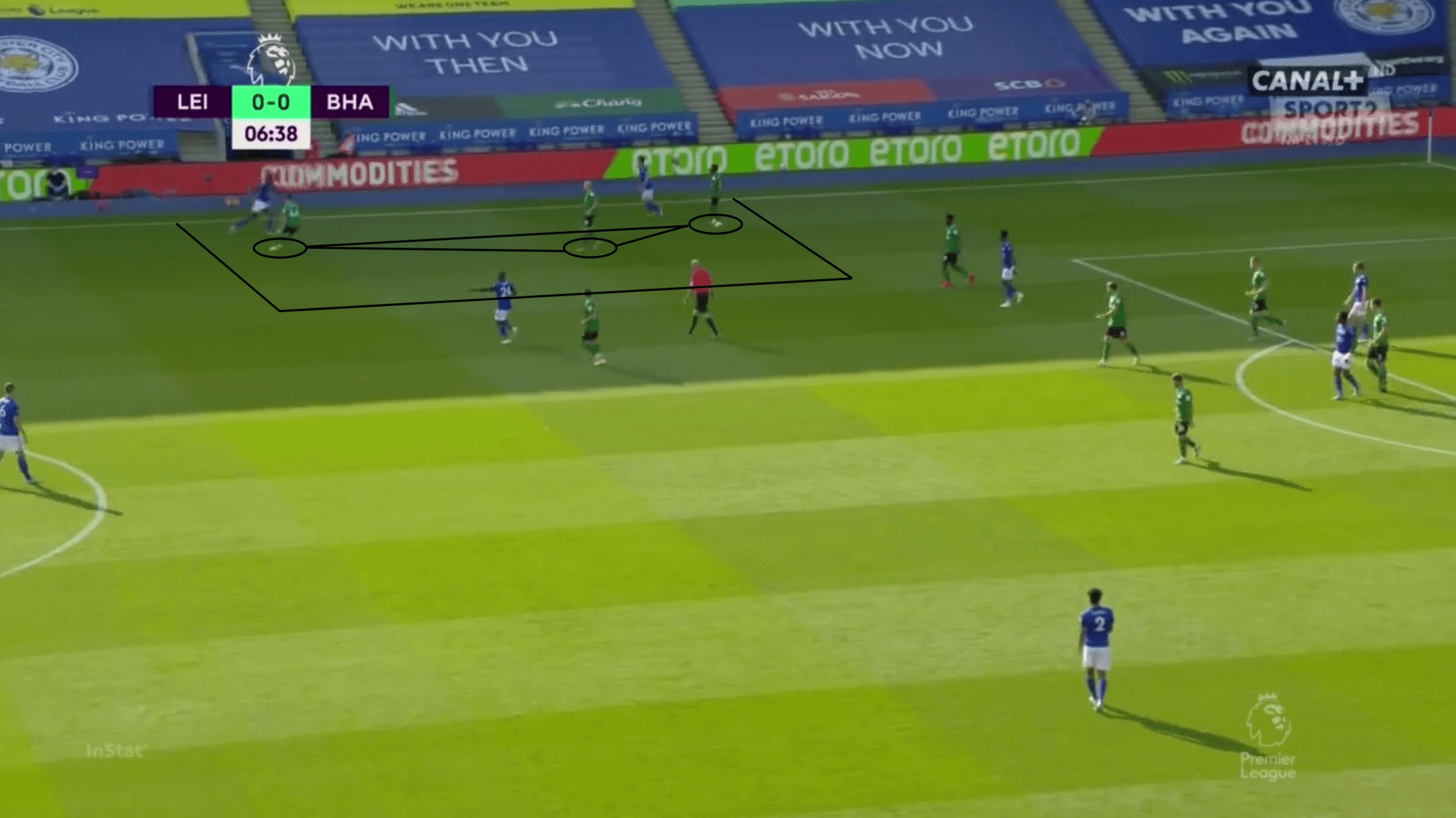 Each time Leicester devoted an attack to a particular side, the hard-working Brighton unit tilted, moving the aforementioned players across to snuff out the danger. Notice above how the midfield unit has created a 3 vs 2 overload on the wing, forcing play backwards as indicated by the arm of Mendy.

The result of this defensive tactic was clear and is quickly summarized by the crossing map of Leicester from the first-half. Very few crosses were allowed as a result of the overloading ball-side. The few that were able to be delivered were unsuccessful and the one successful delivery came from a corner.

Another away draw for Brighton will delight Graham Potter and his team. Four points from a possible six, moving onto 33 points create some breathing room between the Seagulls and the chasing pack. Potter will be the first to admit, however, that all is not over, and the Seagulls will need to continue to defend expertly if they want to play Premier League football again next season.

Luckily for Leicester, they returned from the break in pole position for a Champions League spot. The gap between them and the chasing pack has, however, reduced once again with another draw. Whilst others win around them and the season edges towards completion, Leicester will be desperate to put a few wins on the board before they face Man United in their final game of the season.