The NWSL is heating up and the standings are beginning to take shape at the top of the table. Both Portland Thorns and Chicago Red Stars were mounting a serious challenge for the title with this match shaping up as a highly anticipated contest. Both teams were gunning for the top spot, however, a recent downturn in results has seen the Red Stars start to falter after back to back losses to Sky Blue and Orlando Pride. Portland Thorns, on the other hand, were coming off a two-match winning streak beating North Carolina Courage and Washington Spirit. The teams needed a win to create daylight between themselves and stay ahead of North Carolina Courage who have two games in hand.

This tactical analysis will look at the main tactical talking points in this encounter and how Chicago Red Stars failed to take any points back home. We will look at the tactics employed by both teams and how both coaches looked to play.

Mark Parsons lined up his side in their familiar 4-2-3-1 formation and named an unchanged side for the visit of Chicago Red Stars. Christine Sinclair continued in her number 10 position with Margaret Purce leading the line. Hayley Raso continued to bring dynamism and creativity to the Thorns with Australian right-back Ellie Carpenter bombing down the right-wing just behind her.

Rory Dames made two changes from the match against Orlando Pride, with Katie Naughton and Savannah McCaskill replacing Arin Wright and Danielle Colaprico. Julie Ertz resumed her customary role as the defensive midfielder partnering up with Morgan Brian. Dames decided to match the Thorns and utilised his own 4-2-3-1 formation that has served the Red Stars well. Star centre-forward Sam Kerr led the line, with Vanessa DiBernardo moving out to right-wing to make way for McCaskill to play the number 10 role.

Parsons looked to have a clear game plan from the very start. With the knowledge that the Chicago Red Stars were playing a much narrower, more compact formation in the forward areas, he wanted to overload the central areas and make it difficult for the Red Stars defence. The Thorns planned to disorientate the Red Stars’ compact defence by allowing midfield runners to burst into the area. Lindsey Horan is particularly devastating in this regard, with her style of play suited to late surges into the box. Ideally, they would look to isolate players and create numerical superiority in the 18-yard area. 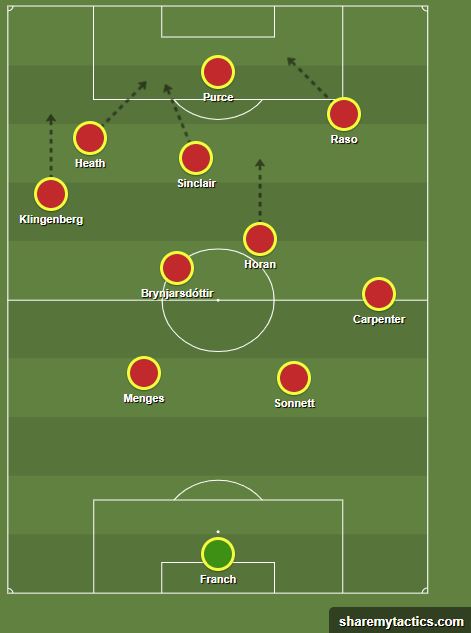 The above image illustrates the theoretical plan the Thorns tried to implement and the first goal was a testament to this strategy. The wide players were hugely vital in supplying, creating space, and switches of play (more on the wide players later in this analysis). They were able to divert attention away from the central players.

The graphics above illustrates the first goal scored by Portland Thorns and how they utilised the overload effectively. Meghan Klingenberg is in possession in a one v one position against DiBernardo. She quickly shifts on to her right and notices the gap between the Red Stars defensive line. Raso is unmarked on the far side but more importantly, Horan, Purce, and Heath have positioned themselves in a favourable situation against Sarah Gorden, creating a 3v1 situation.

Klingenberg’s pass into Heath is then touched into the path of Sinclair. The runs of both Horan and Purce acted as decoys for Sinclair to escape Naughton’s grasp and slots past Alyssa Naeher.

There was a similar theme throughout the first-half with the second goal mirroring Portland’s focus on putting numbers into the area. Heath, Horan, Purce, and Raso all caused havoc inside the area. Even if they were equally numbered, clever and quick movements away from their markers made all the difference as the Red Stars were too slow to react.

Chicago Red Stars produced a dogged defensive display against the Utah Royals and Washington Spirit where they were able to dig deep and remain disciplined. However, against the Thorns, they seemingly lacked communication and looked disjointed especially when the Thorns attacked in numbers. Two of the three goals could have been prevented by some astute and attentive marking.

The Red Stars have previously employed a narrow, compact backline with the full-back pushing out to close any space for the full-back or winger to operate in. While this was a successful tactic against the Utah Royals this, however, creates a big gap between the centre-back and full-back which is usually plugged in by the deep-lying central midfielder. Portland Thorns used their wide players expertly in executing switches of play by concentrating play down one side whilst the opposite winger or full-back would be embroiled in a one v one situation, or even unmarked.

Tobin Heath was seen across the front line moving players out of position putting Ertz and Brian on high alert to make sure she was properly marked if she drifted into the central areas. However, her movement and effectiveness in creating chances could not be underestimated. She claimed an assist and had a hand in two of the goals scored by Portland.

Heath’s most impressive attribute is her ability to create space using her positioning and dribbling. Whether she dribbles from deep or navigates herself through one v one situations, Heath manages to get the better of her marker. A player in her position looks to stretch the opposition and isolate the full-back or find pockets of space to provide a wide passing option. This allows the midfield runners to make runs in between the centre-back and full-back to capitalise on the space created by Heath.

In both goals, she used her positional intelligence and pitch awareness to understand her teammates position on the pitch. For the first goal, we could see her in the central areas using her intelligent positioning to move the focus away from her teammates around her.

As the graphics above highlight, the second goal is where she displayed her intelligence in knowing her teammates’ position. Here she is seen cutting trying to dribble past the full-back. Heath was able to notice Raso unmarked on the far side as she looked to switch play to the right-winger. As the ball was crossed over Tierna Davidson failed to close down Raso, which led to the cross that ultimately provided a headed opportunity for Purce. What is understated is Christine Sinclair’s perfectly timed run away from the ball which actually takes Brian away and puts Davidson in a state of confusion on whether she should hold her position or go with her runner.

After failing to take three points from the game against Orlando Pride, the Red Stars are in a precarious position with their latest loss to Portland. This leaves them in third with second-placed North Carolina Courage two points ahead with two games in hand thanks to their exploits in the ICC Women’s International Cup last week. Even the Utah Royals are one point behind with a game in hand. Back to back losses have been difficult and the analysis shows the issues come down to ineffective defending and marking. Dames and co. need to make adjustments quickly in order to stay within touching distance of the leading pack.