The match started with such an intensity due to the guests pinning back NYCFC to their own half. This quickly bore fruit in the tenth minute as New York Red Bulls grabbed the lead by Alex Muyl. Before the break, New York City FC were able to equalise from a penalty and set the final results in the 53rd minute.

This tactical analysis will look into how Chris Armas and NYRB set up their pressing tactics. 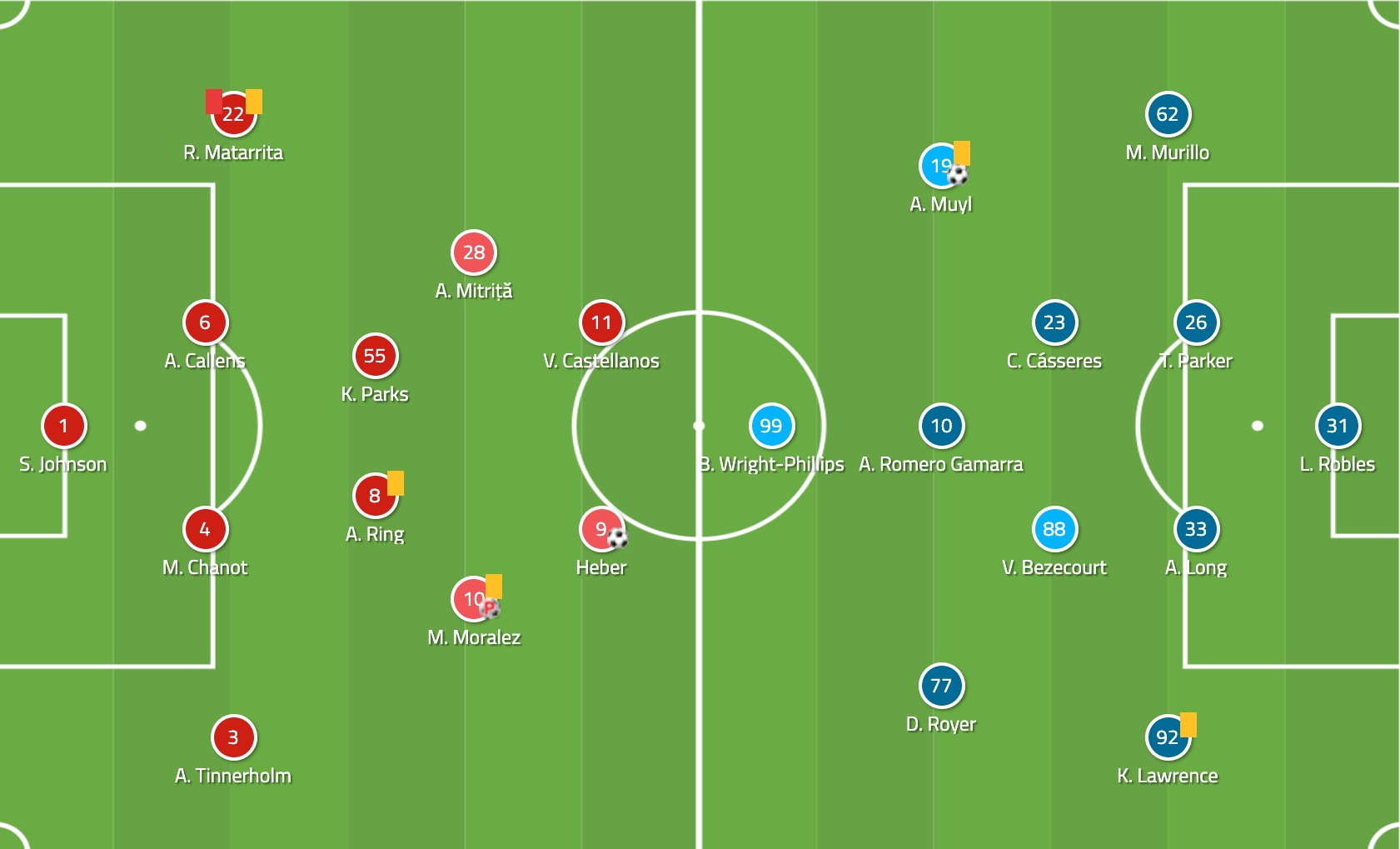 Domènec Torrent chose the usual 4-3-3 formation, although it often morphed into a 4-2-2-2 as Moralez occupied higher, left Parks and Ring deeper and Alexandru Mitriță dropped next to Moralez. In team selection, only some minor changes occurred. Instead of Rocha, Parks occupied the left in the midfield three. In the front line, Mackay-Steven was replaced by Alexandru Mitriță.

On the other hand, after Chris Armas had rested some important players he now sent out the full power for this battle in the usual 4-2-3-1 shape.

Aggressiveness from the beginning

One of the main themes of this clash was the aggressive behaviour (in terms of intense pressing) against the ball. It was evident in both sides’ play, that they did not want to let the opponent play, therefore, New York Red Bull registered a 7.67 PPDA (pass per defensive action) which is not an out of ordinary value for NYRB since Armas’ side only allow an average 7.97 passes before start actions against it. Meanwhile, New York City had an even better PPDA value in this game, they only allowed 4.41 free passes for the guests.

Having said that, the early stages of the game was all about NYRB’s intense high-pressing which caused a lot of trouble for Torrent’s men. The image below shows how they rushed on the ball-carrier to force him to give up the ball. The only option was a volley but it was a bad one, so NYRB quickly collected the ball, and initiated a counter-attack which caught NYCFC off guard and thus Muyl was able to break through the disorganised defence with ease and score.

As I mentioned, NYRB started with high pressing to disrupt the NYCFC play in their early build-up. They stay high up at throw-ins and goal-kicks too.

Romero pushed up and formed the first line with Royer on his left and Wright-Phillips on the right, thus the away side lined up in a 4-3-3 formation against the ball. Usually positioned in between the half-space, the image below highlights this:

It was a common scene that New York City FC tried to build out from the goalkeeper. In these situations, the centre-backs occupied wide and full-backs pushed high up. With this setup, they created a 2-4-2-2 shape.

Although New York Red Bulls created a tough circumstance where the home side struggled in the beginning, eventually they found ways to beat the opponent’s press or sometimes NYRB did a mistake which let NYCFC escape the pressure.

Here is an instance where Royer’s error gave the opportunity for NYCFC to build out from the back. The two midfielders’ deep positioning gave enough options in between the NYRB’s front three, therefore it allowed the goalkeeper to find a teammate with a ground pass. Parks received the ball and passed out wide to Chanot.

In reaction to that, Royer started to push diagonally out to press Chanot while Romero followed Parks, and Wright-Philips also moved higher up a bit to block the pass route between the opposition centre-backs and to gain access to the goalkeeper in case of a back pass to Johnson.

However, as Royer closed on Chanot, he moved a bit wider to block the passing route towards the full-back (Tinnerholm) and pressed Chanot from outside to inside. This opened up the channel toward the centre and allowed Chanot to pass to Ring. In this situation, Royer should stick to the diagonal pressing angle to protect the centre and let Chanot pass to Tinnerholm since Bezecourt had already moved out of position to close on the opposition full-back in case of the need to press him.

As this analysis showed, NYRB were good at pressing then as they were in this battle, however, NYCFC’s staggered build-up allowed them to beat it. Nevertheless, there was an instance early on where they could build out from the back but due to lack of tempo, they were not able to.

As you may see, Royer pressing diagonally, but Chanot has two viable options since he has good angles to the midfielder and towards Tinnerholm (also a good connection for combination). He chose to pass Tinnerholm, but the full-back was a bit slow and the opponent (Bezecourt) arrived there to press thus the opportunity was over.

When the home side was able to build up, they look to create a crossing opportunity in the final third. Interestingly, this was common in these two teams as they both used crosses for chance creation.

When it comes to defending, New York Red Bulls kept their intense style and defended in a ball-oriented way. This means they shifted to the ball zone and tried to press intensely to force the opponent to give up the ball. Due to the narrow shape and ball-oriented occupation, NYCFC’s wide full-backs were key to escape the pressure and exploit the space on the far side.

Therefore, both Matarrita and Tinnerholm had to run up and down next to the touchline to provide a pass option in order to help the attacking phase. Here is another instance from the game where NYCFC tried to utilise the above-mentioned tactics. New York Red Bulls closed down the right-wing, with even Wright-Philips falling back to help to defend on that side. The obvious choice would be to take advantage of the huge space on the far side, however, as Moralez switched the point of attack, Lawrence immediately pushed out and pressed Tinnerholm.

Not long after the break, NYCFC were able to score again which gave them the lead and eventually the victory. After they grabbed the lead, Domènec Torrente switched his side to a 5-3-2 formation in order to gain more protection and stability.

Although Ring often stepped in between the two centre-backs previously as well, after the change in formation, he stayed in there. Not to mention the obvious difference- in the first half, Ring only dropped between Callens and Chanot at the possession phase to provide better circulation and help bring up the ball.

This victory is a huge achievement for New York City FC due to the fact that there is a huge race in the Eastern Conference for positions. For example, NYCFC are in the third place but there is only a one point gap between them and the leaders, Atlanta United and Philadelphia Union.

Meanwhile, New York Red Bulls are in a dangerous place. With this defeat, they only have four points advantage ahead of the seventh position Toronto FC. Bear in mind, NYRB have had inconsistent performances this season.