There are different types of goalless draws, like when the two teams eliminate each other’s attacking game and neither can deal with the opponent’s defensive power, therefore, the combat ending without a goal, but the MLS midweek fixture of Minnesota United vs Los Angeles Galaxy was of a different kind. In this clash, both sides had their opportunities but still failed to score due to the lack of concentration in finishing and bad luck. Even the second top scorer, Zlatan Ibrahimović missed the opponent’s goal.

This is especially interesting since their first meeting a few weeks earlier ended with a 3-2 victory for Galaxy. This tactical analysis will reveal what happened in this battle and how the game played out.

Minnesota United had a good start in this season with two victories but they quickly lost two games which caused them a lot of trouble, therefore now they trying to get back on the right track and consolidate their position. Thus this game must have been important for them, especially after the defeat when Minnesota visited Los Angeles Galaxy. For this revenge game, Adrian Heath lined up his team in a 4-4-2 shape that they mostly use. 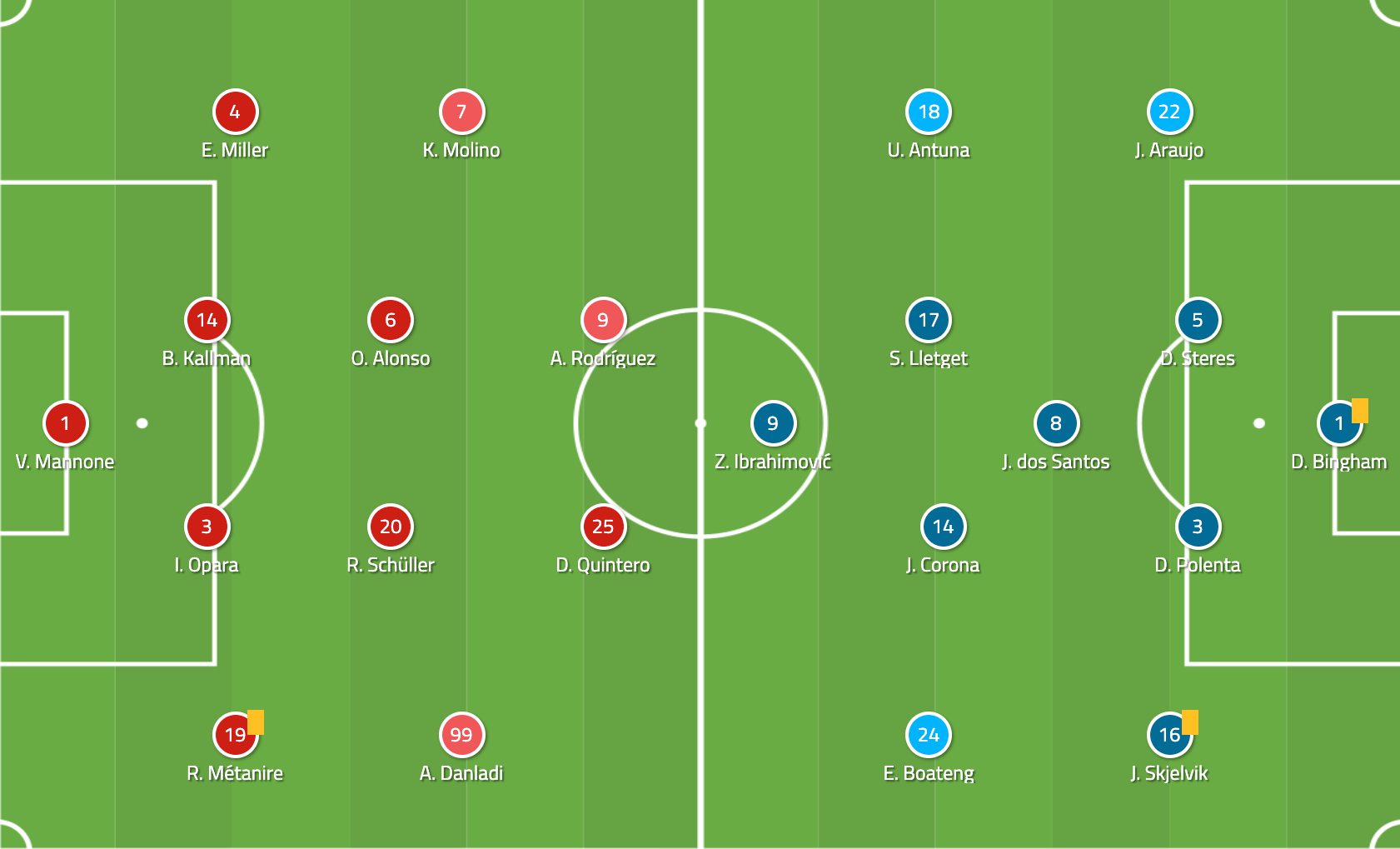 There were some changes in the team selection. Heath had to break up the central midfielder pair of Osvaldo Alonso and Ján Greguš, replace the latter one with Rasmus Schüller due to suspension. Also, Minnesota head coach employed Kevin Molino and Abu Danladi on the wings instead of the usual Ibarra and Finlay, but upfront remained the forwards pair of Rodríguez and Quintero who have the most goals (5) in the team this season.

On the other hand, the home side has a great run with six wins so far they just behind the leader and city rival, Los Angeles FC but they played one less game. The new head coach, Guillermo Barros Schelotto deployed the usual 4-1-4-1 formation with almost the best starting XI, but there were two changes. Since both Rolf Feltscher and Romain Alessandrini left out due to injury and replaced by Julian Araujo and Emmanuel Boateng.

Adrian Heath’s Minnesota usually play in a defensive manner in terms of a lower percentage of possession and relying on counter-attacks. They have the ball an average 45,19% of the time in this season, therefore against Galaxy, we should have expected from them that they continue to give the ball up and mostly focus on defending, even at the home ground. And it was a good hint because Minnesota’s possession was only around 43%.

All that said, it is an important aspect of how they behave off the ball. They formed a slightly narrow 4-4-2 so they could maintain a horizontally compact shape, which is an important principle for them, although it was not always perfect.

One of the biggest questions before the game was how will Minnesota compete in the midfield against Galaxy. Since they were in a 4-4-2 system, they had two central midfielders, whilst Galaxy had three. For that reason, the home side used a very narrow first line, which means the two strikers maintained close proximity to each other in order to protect the central area.

This was immediately evident in the game both in high pressing situations and in the defensive phase.

This seemed a good approach because the guests were forced to play and build in the lateral zones, mostly with long balls through the full-backs. However, in these occasions, Minnesota always closed down the wing. Thus it caused some trouble for Galaxy mostly at the beginning of the match.

Most of the times, Minnesota created a mid-block, but after losing the ball they did not retreat immediately, rather stayed up front and tried to retrieve the ball through counter-pressing which was a common principle with the guests. Although it was not as effective as they wanted to, therefore Galaxy were able to counter-attack a few times.

Back to the mid-block, it aimed to prevent Galaxy’s central playing and forced them to the wings. In order to this, both Rodríguez and Quintero dropped deep during the defensive phase to help the midfielders and maintain the numerical superiority (4v3) against Galaxy’s Dos Santos, Lletget and Corona.

With the ball Schelotto’s man aimed to get behind the opponent’s defensive shape and create chances for Ibrahimović. During the possession phase, the full-backs pushed forward and usually occupied in high areas. Thus it allowed the wingers, Molino and Danladi to occupy a more interior position, mostly in the half-space. While the full-backs hugged the sideline in order to provide width for the team.

Moreover, sometimes the full-backs pushed too high and became isolated. As the instance shows below, Araujo occupied in the first line which means when Corona drove forward on the ball he could not find any pass options, even though there was a huge gap between Minnesota’s second line and their last line. It’s safe to say it was a flaw in their play. They were quite compact horizontally but not vertically. 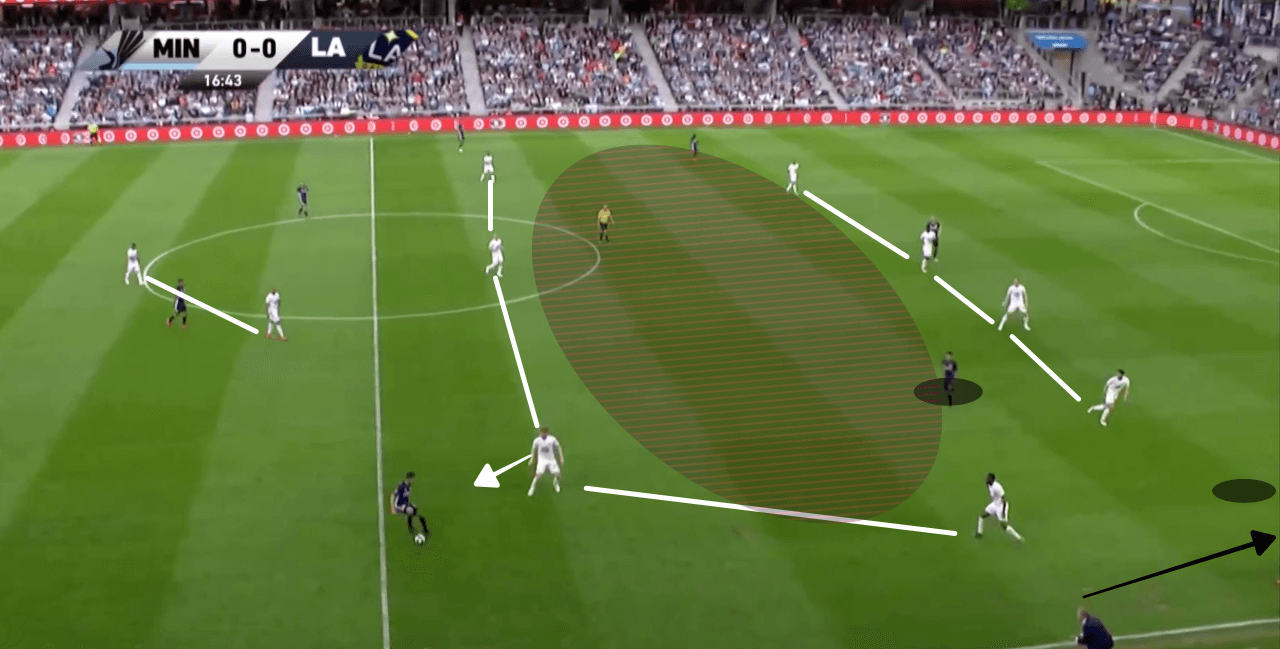 Although Minnesota tried to restrict Galaxy’s play in the middle, the away team still able to overcome on that hindrance. Joe Corona and Sebastian Lletget dropped deep in the centre to help Dos Santos thus they created a 3v2 situation against Minnesota strikers. 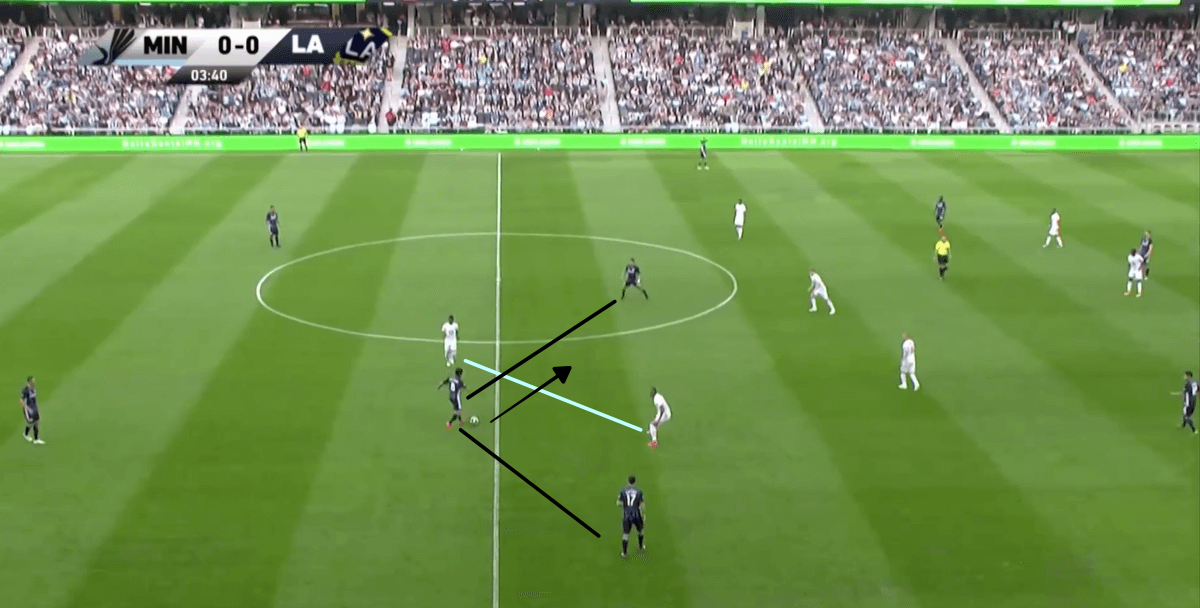 This appeared in the pass map. It shows that Galaxy were able to keep a strong pass connection between the central midfielders and even with Ibrahimović. Nevertheless, they struggled in the final third thus they failed to create lots of scoring chance. While Minnesota were able to create those chances through counter-attacks – mostly on the right wing – or from set pieces.

Galaxy had a 1,9 goal per match ratio before this game, whilst Minnesota had an even higher, 2,4 goal per match and they conceded an average 2,1 goals per match, thus these stats showed how unique was this goalless draw. Especially, the home side was close to scoring a goal several times, but overall, they failed to achieve it.