Why did Leeds leave it so late to rescue a point against Middlesbrough?

The Championship‘s Saturday lunchtime kick off saw Middlesbrough almost complete a perfect bounce-back victory after FA Cup disappointment against League Two Newport County. Leeds, however, had something to say about it as their goal deep into injury time rescued a point.

The game was on course to be a classic ‘Pulis-ian’ victory after Boro had grabbed the lead early in the second half through Lewis Wing. They were denied all three points, though, by an emphatic header from United midfield Kalvin Phillips in the 101st minute of the game.

Leeds, as usual, dominated possession seeing 69% of the ball. While they managed to hit 17 shots at the Middlesbrough goal, only four of these were on target. Boro themselves managed nine shots with three on target.

The point for Leeds meant they snuck into first place in the Championship, although they slipped back into second after Norwich’s victory over Ipswich on Sunday. Middlesbrough, meanwhile, will shoot a worrying glance over their shoulders after a Derby win put the Rams just one point behind them.

Middlesbrough went with a back three on Saturday as they have done for most of the season. The variant of it they played in this match was 3-4-2-1, with Jonny Howson and Lewis Wing behind Jordan Hugill leading the line. A more direct approach was often was favoured by the hosts, forcing Leeds’ centre-backs into making 18 headed clearances between them.

John Obi Mikel was present again in central midfield for Boro, after making his first appearance for the club last weekend in a 3-2 win against West Brom. The former Chelsea enforcer, who played in the World Cup last summer, has been a major coup for Tony Pulis in the January transfer window. 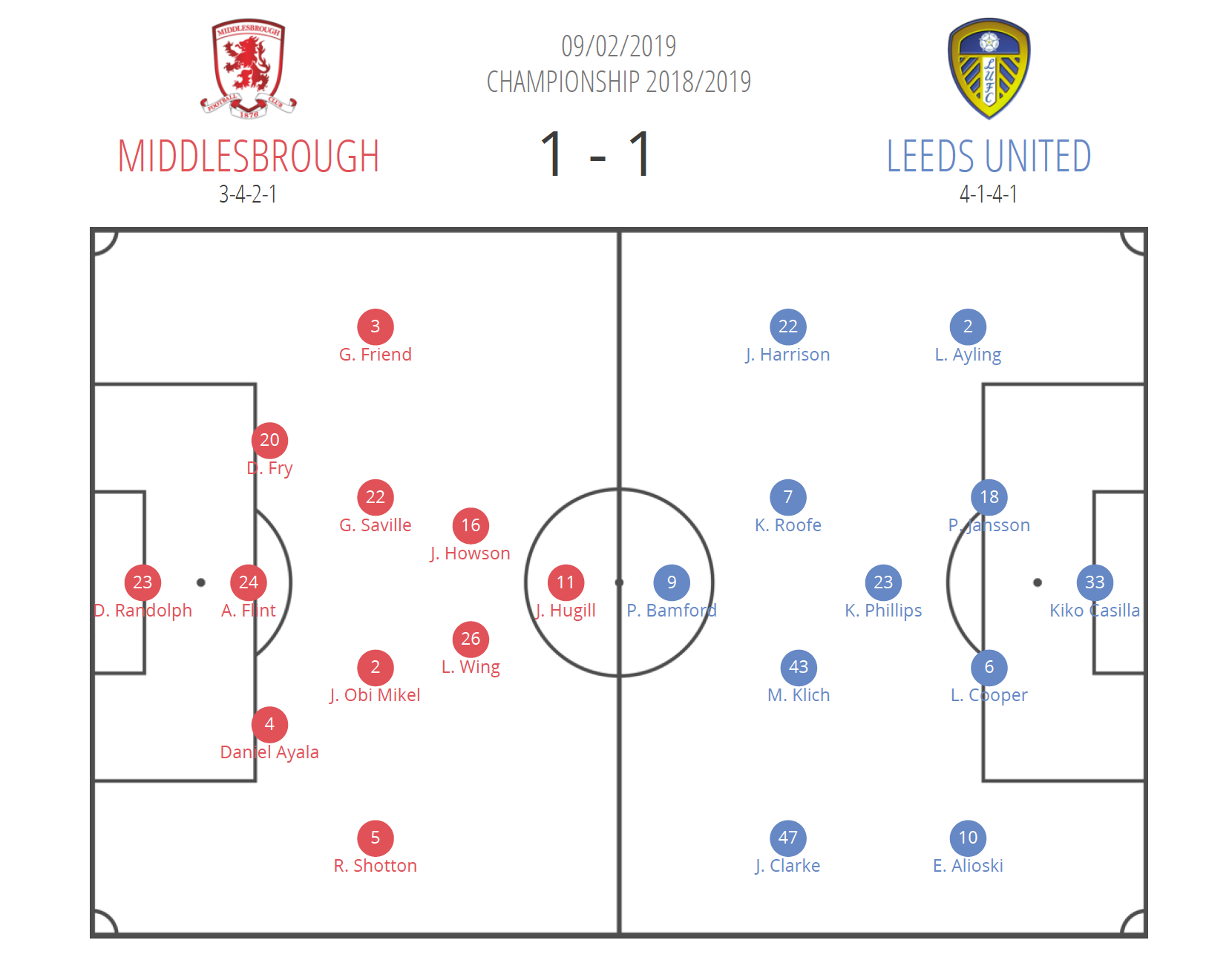 Leeds went with their 4-1-4-1 formation that has been a hallmark of their season so far. Kalvin Phillips was back in the deep midfield pivot role for United after the struggles of Adam Forshaw in that position in their last outing against Norwich. He completed 44 passes, the second highest amount on the pitch.

Kemar Roofe was pushed back into an attacking midfield position with Patrick Bamford taking up the centre forward role. While Bamford is a highly capable striker, it was a somewhat surprising selection seeing as Roofe has led the line in the Bielsa press so effectively this season. Indeed, he made two tackles from his withdrawn position while Bamford made none.

Marcelo Bielsa’s renowned style has been a key feature of Leeds this season. The ferocious press and incisive vertical attacking play are the show-stopping features of the style, but it all starts with thoughtful build up play from the back. Positioning is key to this.

In the below image, we can see the shape of the build-up from the back. Kalvin Phillips is operating as the deep pivot from midfield, dropping back to collect passes from centre backs Pontus Jansson and Liam Cooper. The full-backs, Luke Ayling and Ezgjan Alioski (just out of shot), have both pushed on to a position level with Phillips. This creates a 2-3 formation much like Pep Guardiola’s sides, opening up triangular passing options for the man on the ball. 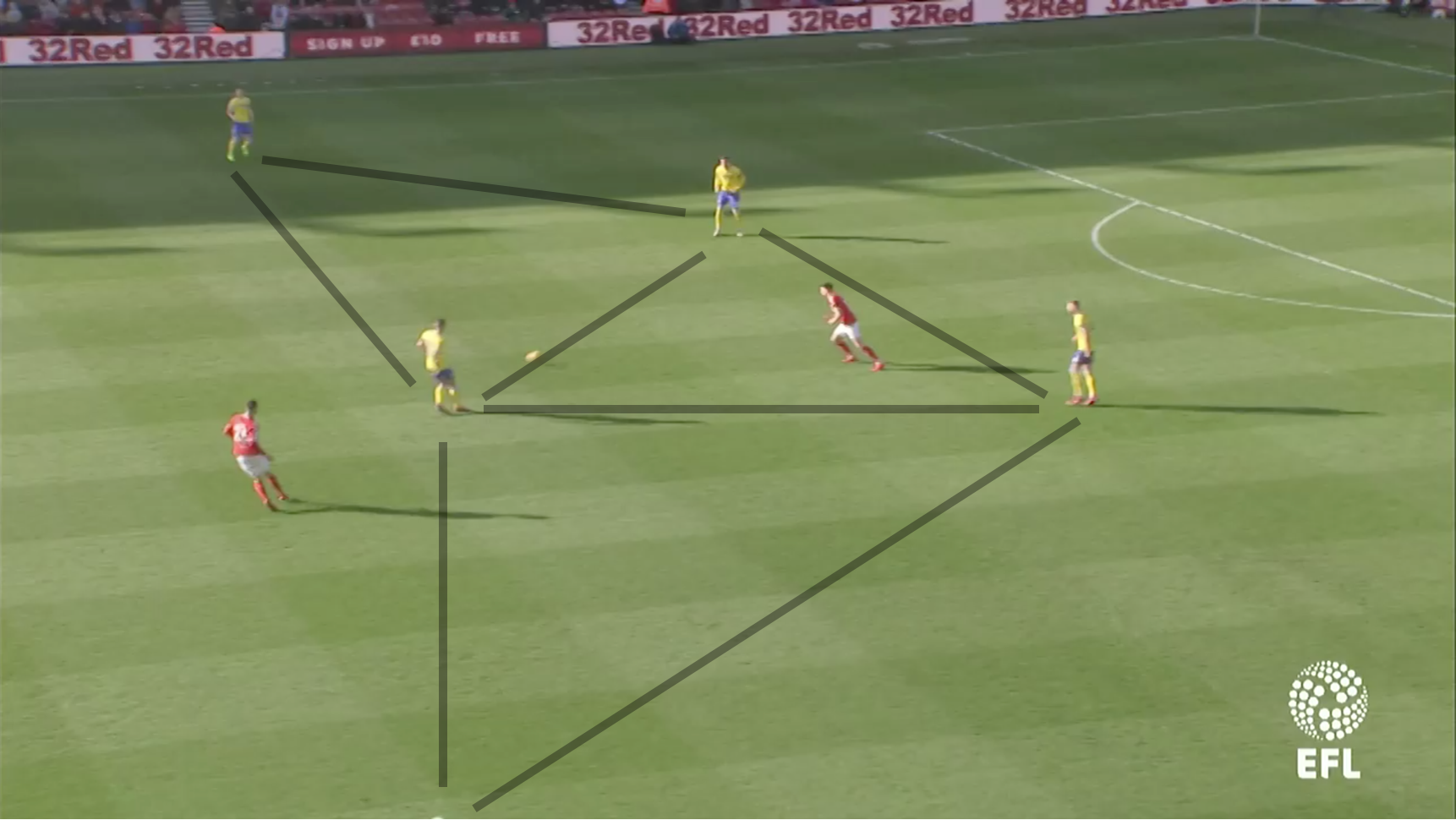 Further forward, this shape is somewhat replicated by the attacking players. The wingers, Jack Clarke and Jack Harrison, have advanced high and wide level with the centre forward, in this instance Kemar Roofe who has momentarily swapped position with Patrick Bamford. Mateusz Klich is close to Roofe to offer support, while Bamford is making his way forward after dropping deep to provide an option for the defence. 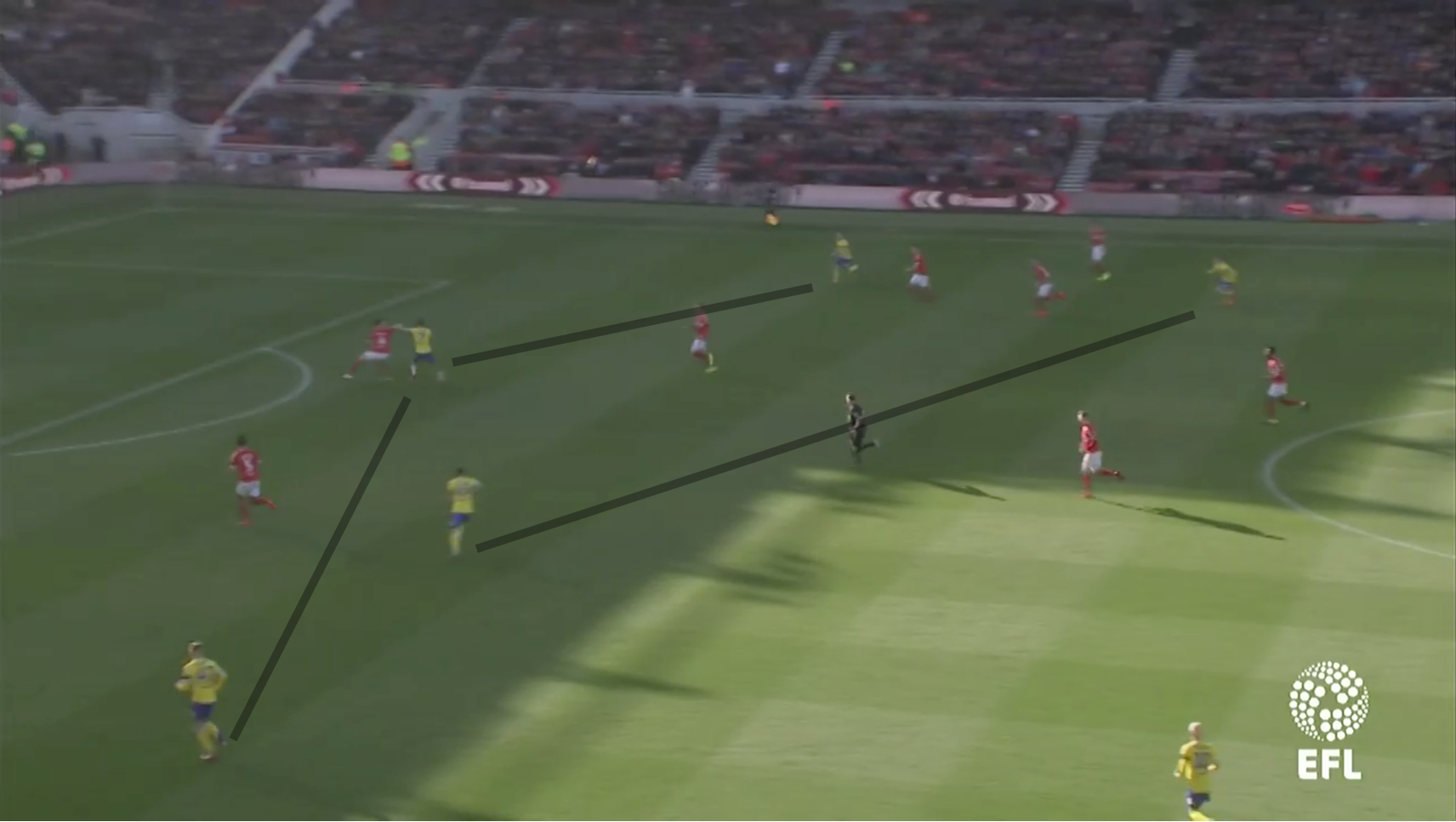 Above, the levels on which the players are operating are highlighted. The wingers are highly advanced and playing very wide, which is key to how Bielsa likes his Leeds side to attack. It stretches the defence as well as opening up more passing options for his side.

Middlesbrough’s goal was an excellent example of how to exploit a high pressing system such as the one that Leeds to deploy. The system creates gaps as players rush to close down the man on the ball, leaving spaces which can prove extremely dangerous if exploited.

For the goal, John Obi Mikel does well to win a midfield battle with Kalvin Phillips. The ball then falls to George Saville, which sees Leeds right-back Luke Ayling rush out to close him down. This leaves a massive gap on the flank, which George Friend does well to exploit courtesy of a good bit of vision from Saville. 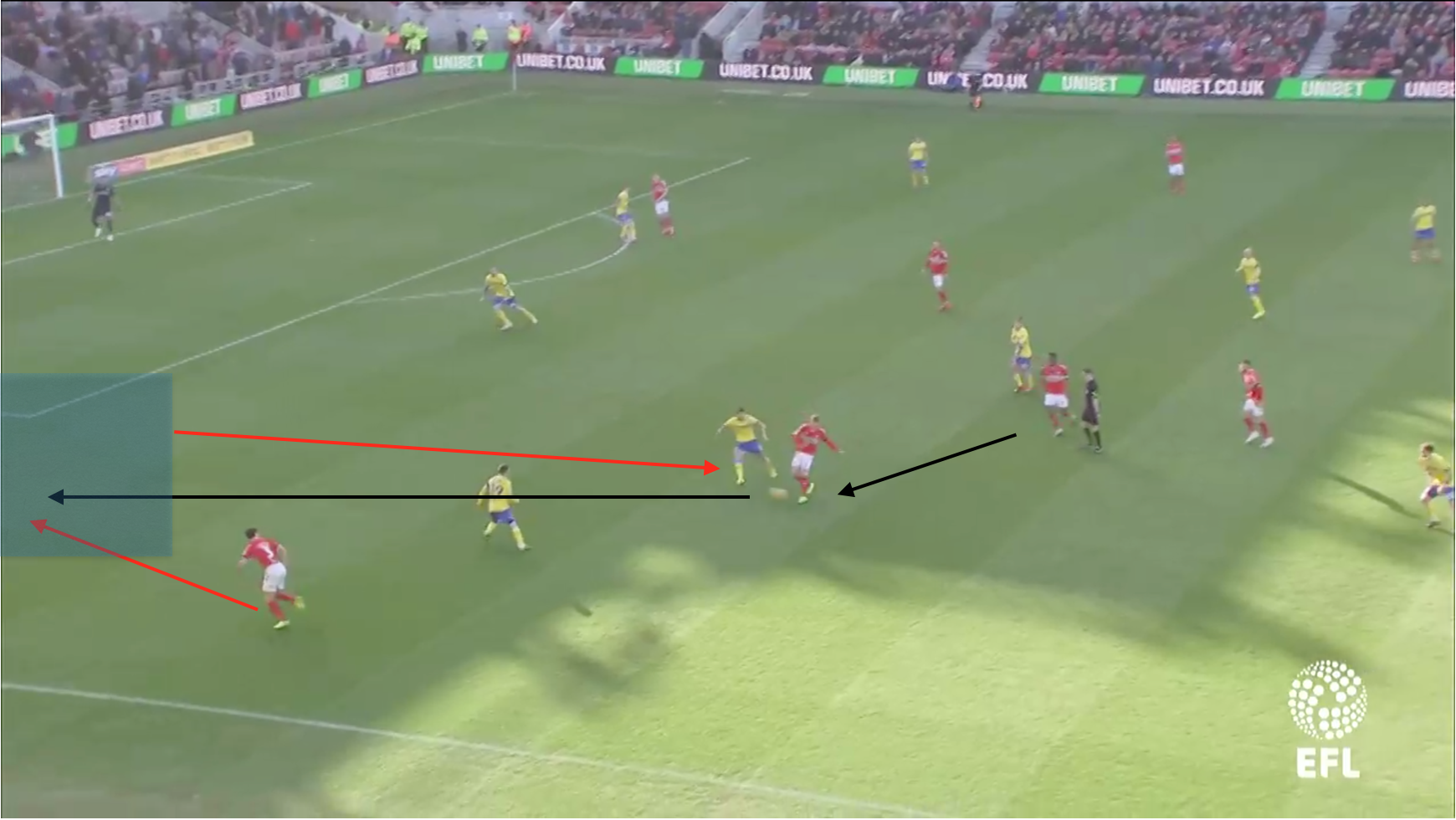 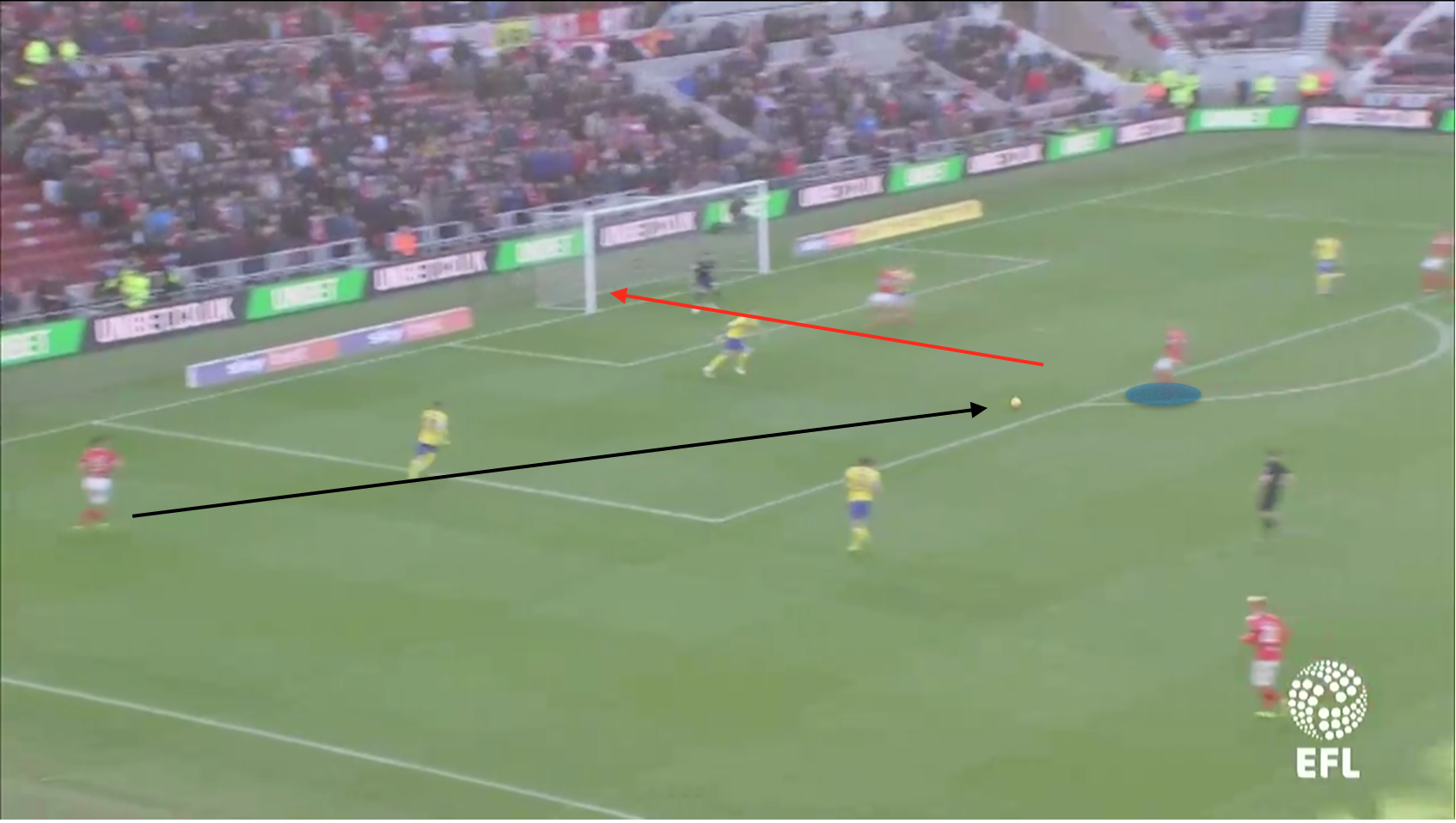 This shows how Middlesbrough smartly exploited the gap in United’s system. Such a high press will inevitably leave space in behind at some point. If you can get the ball past the initial press, be it through a bit of skill or a pass, the gaps are there to be exposed.

The attacking approach from Leeds was enough to put pressure on the Middlesbrough defence, but they had trouble truly breaking down a packed Boro back line that has only conceded 23 goals all season. They ended up having to rely on the aerial disruption caused by Pontus Jansson venturing forwards from the back.

Moments after his presence created an opening for Kemar Roofe from which he should have done better, Jansson himself came agonisingly close to equalising for Leeds. His header from Jack Harrison’s delightful cross bounced off the post, before Patrick Bamford spurned a glaring chance wide from the rebound. 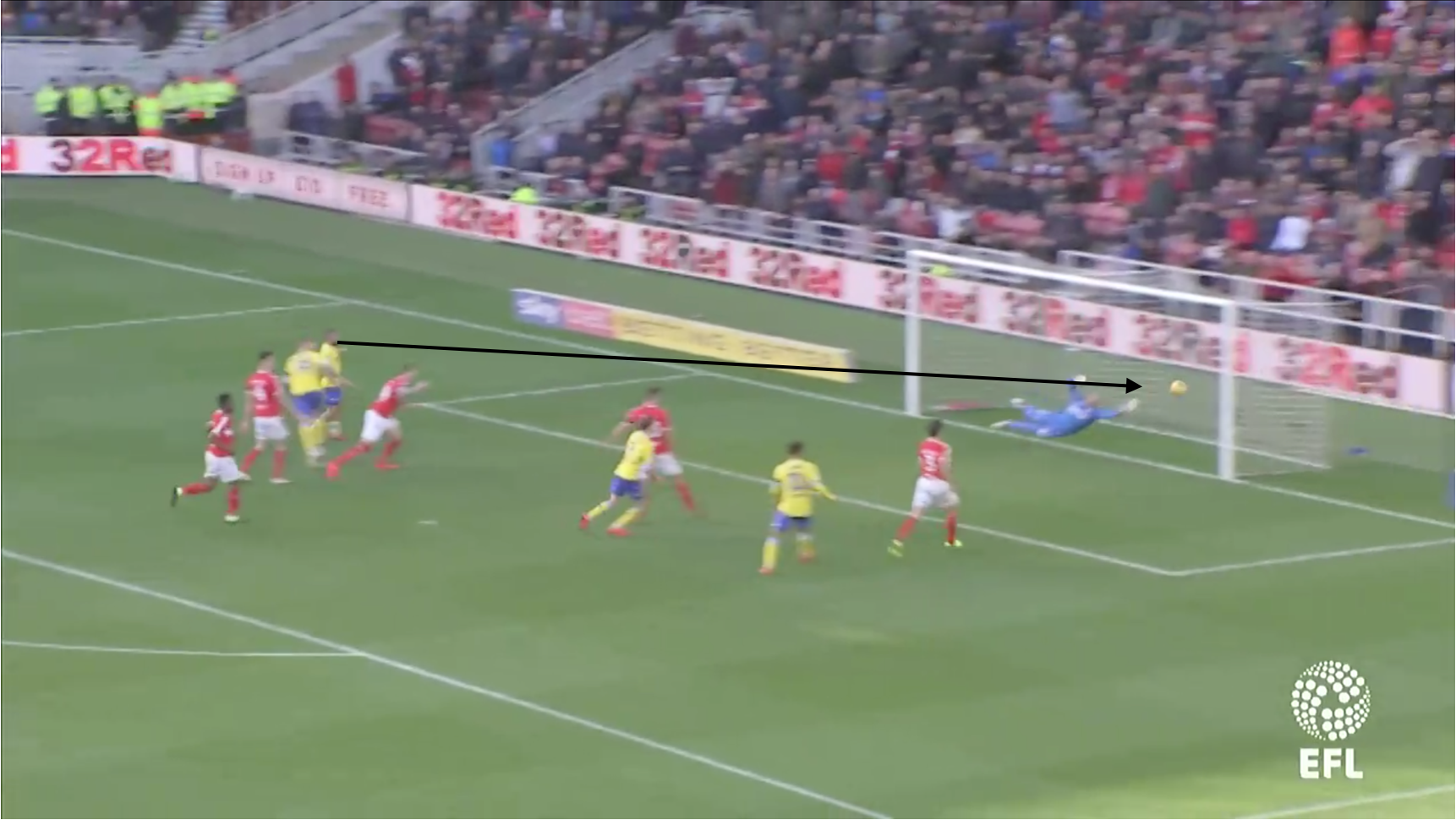 It was Liam Cooper, though, who made the most telling aerial contribution in the opposition box. As you can see from the image below, the centre-back rises brilliantly to meet a last-minute corner. He heads back across goal to Kalvin Phillips, who generates excellent power from his forehead to send the ball home. There is also a bit of a case of ball watching from the Boro defenders, a disappointing occurrence after defending so solidly all game. 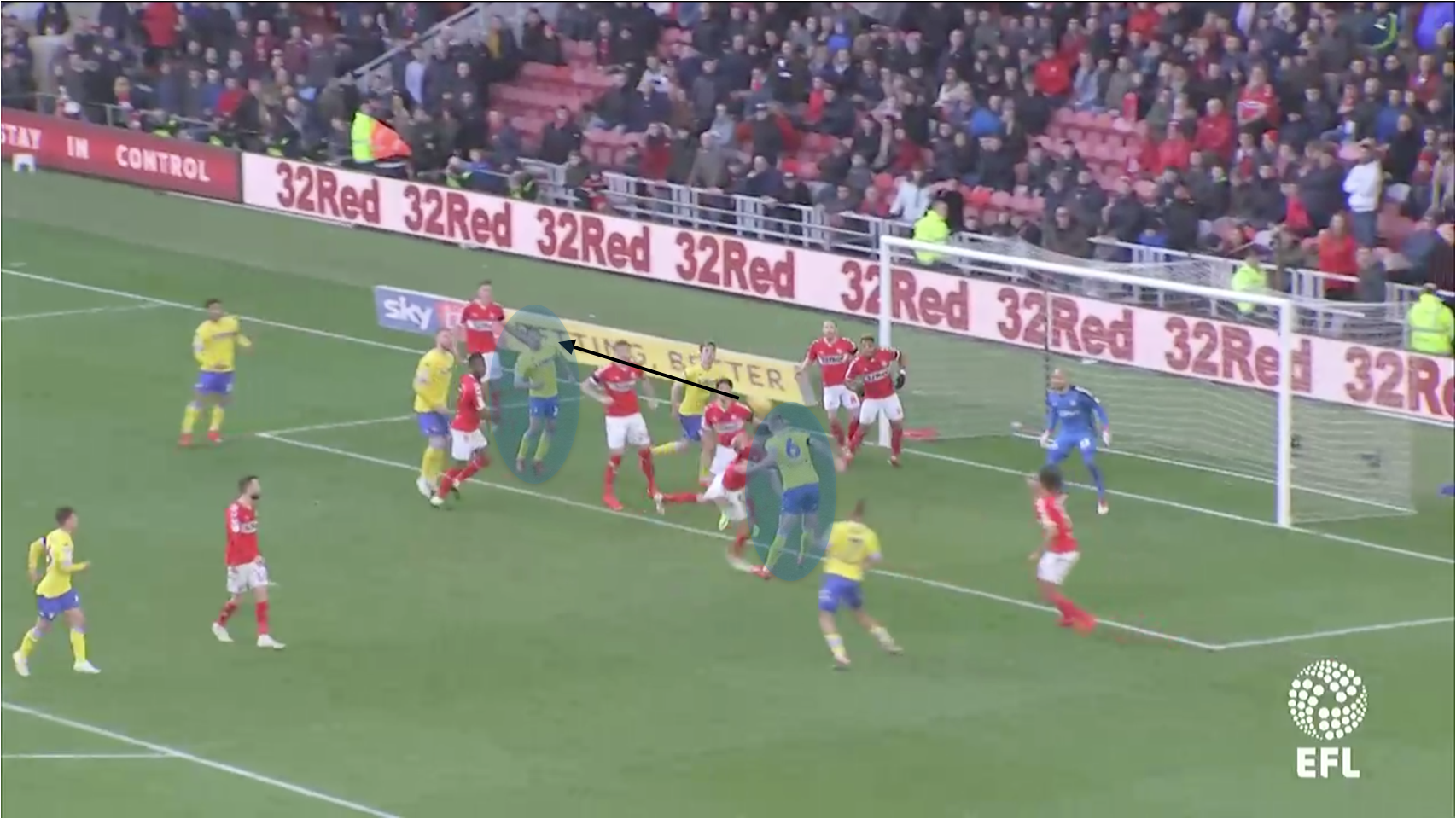 Cooper had a superb game for United. Along with that assist he completed 56 passes, the most in the match. He also made two tackles and won eight aerial duels, the final one being the most vital. It was an excellent day for the Leeds United captain.

Leeds United probably had the better of this game, dominating the ball for large periods of time and generally having more territory. Their attacking play did fail, however, to fully break down the Championship’s best defence as Middlesbrough proved resolute. Indeed, United’s best chances and their equaliser all came from disruption caused by Jansson and Cooper venturing forward from the back.

As well as defending resolutely, Boro also chose their moment excellently to strike. They pounced on the space left in behind by Leeds’ aggressive pressing and punished it. It was an incisive move, orchestrated by the quick thinking of Saville and Friend.

Come the end of the game, Leeds deserved their equaliser having persevered throughout the second half and come agonisingly close to snatching one. They remain in second after Norwich’s 3-0 win in the East Anglian derby put the Canaries two points ahead at the top of the table.