After getting thrown out of the UEFA Champions League by Tottenham, Manchester City have not had an easy time. Since then, a team that are used to scoring a lot have won three of the last four games by a one-goal margin. They have managed to keep their one-point advantage over Liverpool but we have not seen the aggressive and lethal team we are used to. In this tactical analysis, the road to the Premier League title put Manchester City against Leicester City in their last home appearance and they finished with another key yet unconvincing victory. 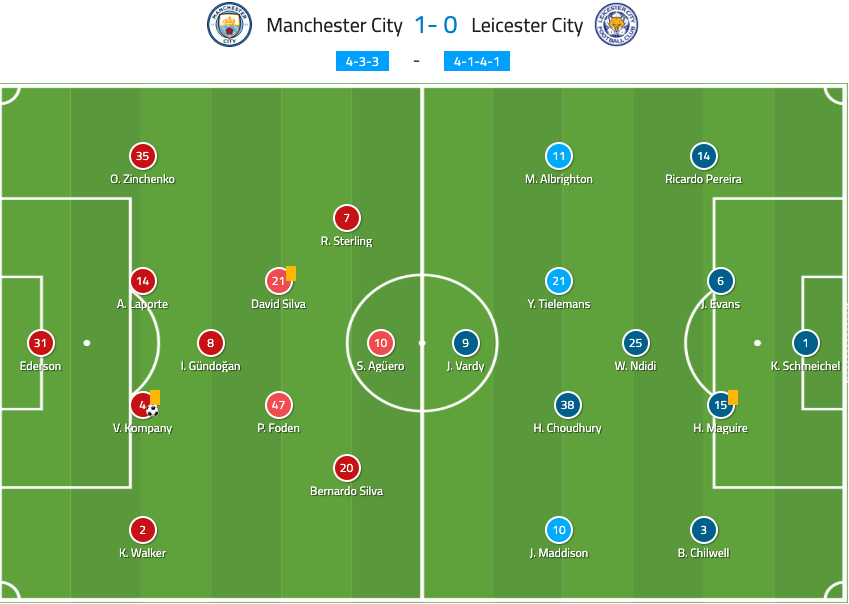 The more offensive midfield in place by Manchester City meant they had less aggressiveness in the recovery of the ball and also more space for Leicester players to be able to keep possession in the middle of the pitch. Maddison had especially a very good first half. He was able to receive several balls with spaces and with his ability generated a lot of fouls in their favour.

When not in possession, Leicester had no regrets stepping back closer to their goal area, as shown in the image below. With a 4-5-1 formation, their main focus was to avoid any of Manchester City’s higher positioned players receiving the ball freely closer to their goal. Contrary to what most teams do, cutting the chances of passing by tightly marking midfielders and both wing-backs, Leicester were more focused on having numerical superiority inside their goal area close to the receivers. 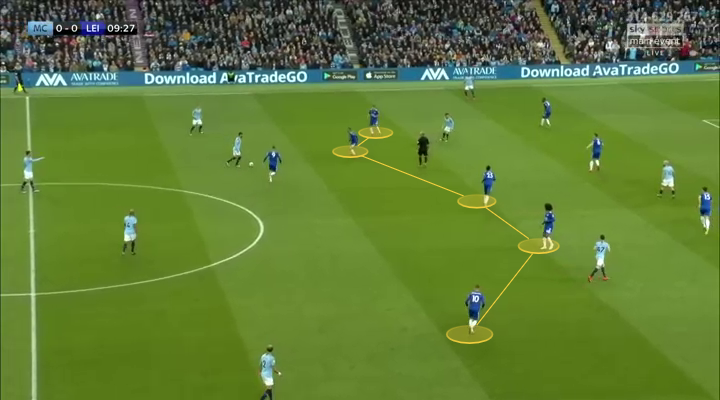 Anytime a Manchester City player approached that area, every time Sterling or Bernardo Silva managed to get the ball inside the goal area, they were quickly surrounded by at least two Leicester players as seen below. 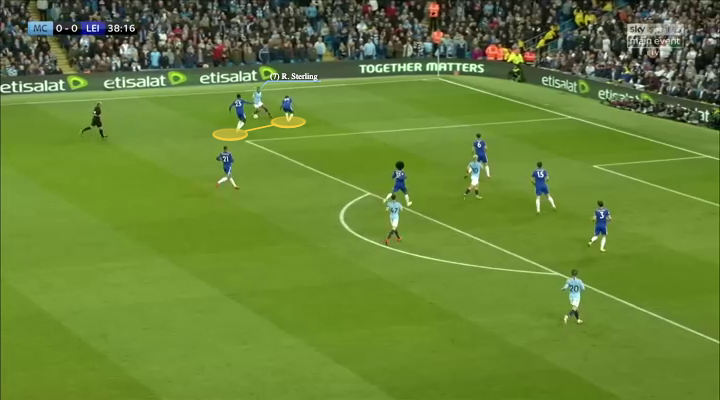 This tactical setup resulted in different performances by Manchester City midfielders during the first half. Gündoğan was almost a no factor, with very little contact with the ball and mostly with short and easy passes and Foden did not participate much when in possession and decided to position himself higher closer to Agüero. This forced Choudhury to move back following the young City player, leaving a space in the middle that was rarely used by Gündoğan and Walker, as the image below shows. Finally, David Silva was more involved in the build-up phase of Manchester City, having good connections with Sterling but not creating much danger. 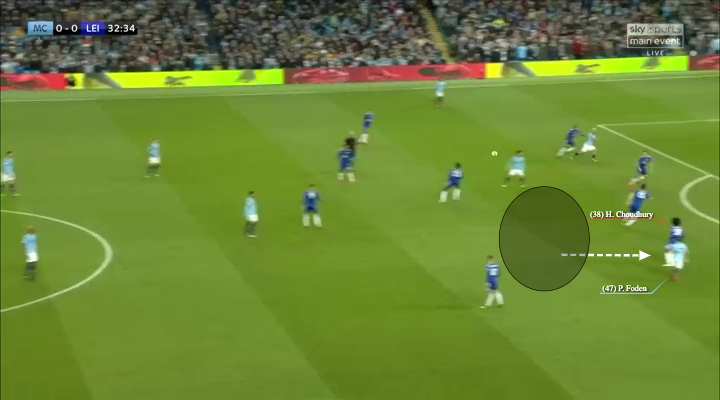 The result of this interesting tactical battle was, surprisingly, seeing Manchester City attacking mainly through long-balls and from set-pieces. Manchester City had a less penetrating attack although were able to gain depth occasionally through long-balls to Bernardo Silva or through the connection between David Silva and Sterling. Being forced to shoot from distance or attacking via set pieces, resulted in lower accuracy, Manchester City having 19 shots but only four on target for a 21% precision, compared to almost 40% in the last calendar year, according to Wyscout.

These long balls meant Agüero had trouble participating in the offensive circuit and was forced to recede to be able to receive the ball, both in the first and second half as seen in the image below. Having the Argentine far from the goal area is a clear positive for any defensive setup against Manchester City. His most clear chance was a header after a corner kick that hit the post and was then saved by Schmeichel. 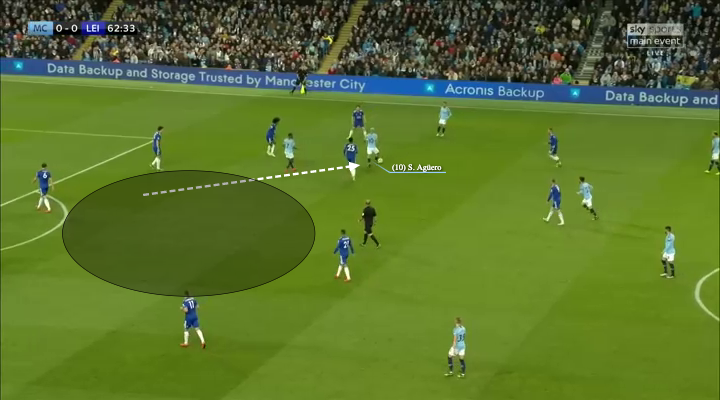 Walker and Zinchenko as wing-backs had minor participation in the offensive build-up of Manchester City, something that rarely happens since Guardiola is using both wing-backs as false inside midfielders when attacking. This happened because of what was mentioned before, being forced to throw long balls or depending on set-pieces, meant that the players located in the middle of the pitch had much less participation in the game.

Knowing the margin of error was minimal in their race for the Premier League title, Manchester City started the second half with a much stronger and intense pressure. Along with that Leicester lost the precision they had to start the build-up from the defensive line, losing possession a number of times close to their goal area. This allowed Manchester City to have some clear chances with more space than they had in the first half, but they couldn’t score, as seen below. 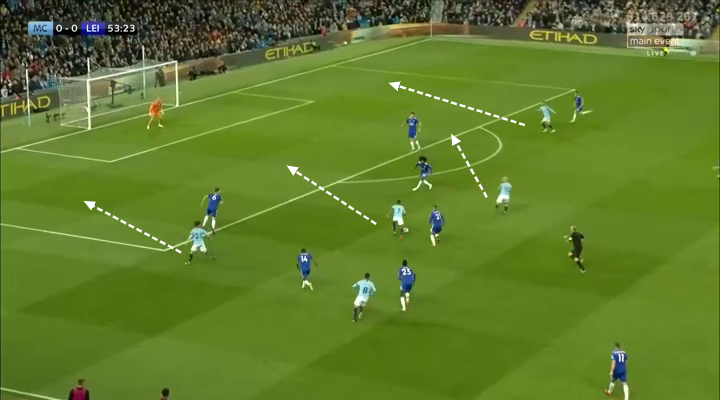 Gündoğan was much more participative, and when possession starts going through him, Manchester City’s game starts flourishing. With Sané replacing Foden, although Bernardo Silva moved back to Foden’s position, at some point the offensive setup of Guardiola’s team looked more like a 4-1-5 instead of the usual 4-3-3. Bernardo Silva, Sterling, Aguero, David Silva and Sané were almost at the same line close to the back four of Leicester as seen below. 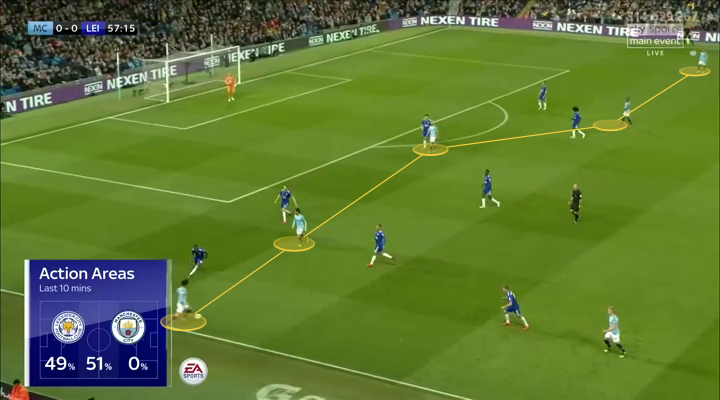 Meanwhile, after a scary first ten minutes when Leicester City suffered defensively, they were able to accommodate for and control Manchester City’s attacks. Although possession increased for the home team, their attacks again lacked depth and Leicester were able to create dangerous offensive chances via quick counter-attacks. Maddison and Ihenacho had clear chances of providing a fatal goal for Manchester City’s aspirations.

When things looked more complicated for Manchester City, attacking with more physical strength than clear ideas and elaboration, Kompany had that shot out of nowhere and gave the home team the much-needed goal that would let them keep the lead in the Premier League race.

After that, Guardiola changed to a 4-4-2 looking to keep the result, while Leicester had to move their lines higher. It was too late, even with Ndidi, one of their best performers in the game, to give breath to Leicester City’s build-up phase. Too tired, they lacked the ideas and the legs to cause danger to Ederson’s goal area. The 1-0 for Kompany was enough and the result was sealed.

Conclusion: Not their best game but Manchester City had to win and they did

We are closing the European season, players are tired and emotions are all over. The fight for the Premier League title is very tight and both Liverpool and Manchester City have had great seasons, both probably deserving to win the title. Manchester City still have a one-point lead and at this time there is no space for mistakes. For most of the fans, a 1-0 will weigh the same as a 5-0 as long as the team wins the race. Maybe Guardiola will think differently, but the trophy is one stop away, it is in their hands to get it.