Why were brave Brighton unable to bypass City’s inertia?

Manchester City came out on top against Brighton on Saturday to send themselves into the FA Cup Final in May. An early goal from Gabriel Jesus after a wicked ball in from Kevin De Bruyne was enough to give the Citizens a 1-0 victory.

The match itself was somewhat lifeless, with City below their best and Brighton doing a useful job at nullifying their threat. The Seagulls themselves had the odd brief opening – mainly from set pieces – but were unable to make anything count.

It was a battling performance from Brighton, who set up rigidly to contain their omnipotent opponents. Jesus’s early goal did not see them waver from their defensive game plan. Indeed, Manchester City could hardly have been accused of missing any sitters. They were limited to few openings throughout the match.

The result means that City are still in the running to win the quadruple, although Pep Guardiola has continued to play down his sides’ chances of achieving that feat.

Pep Guardiola’s ever present 4-3-3 saw some rotation in personnel for this match. Benjamin Mendy and Kevin De Bruyne made rare starts in what has been an injury blighted season for both players.

İlkay Gündoğan came in as the midfield pivot with Fernandinho rested, while Gabriel Jesus started up front. The Brazilian has been in the shadow of Sergio Agüero this season, with the Argentinian in scintillating form. Jesus has started only eight Premier League matches this season. 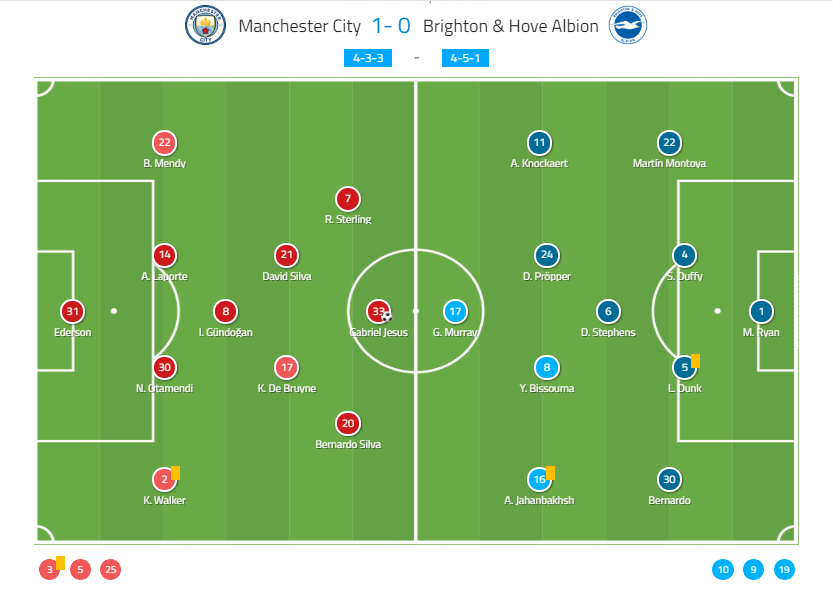 Brighton went with a solid 4-1-4-1/4-5-1. Dale Stephens played the role of midfield anchor, while Glenn Murray was tasked with the unenviable role of lone front man in Saturday’s match. It was a lineup focused on defence, with the reliable pair of Lewis Dunk and Shane Duffy at the back.

Anthony Knockaert provided creativity from the wing, and the Frenchman put in an excellent performance for the Seagulls. He had a pass success rate of 91% as well as making four dribbles throughout the match, the most out of anyone on the pitch.

It’s safe to say that we’ve all become pretty accustomed to Manchester City’s way of playing. This semi-final was yet another display of it, with their build up starting in a sequential 2-3 shape. Full-backs Kyle Walker and Benjamin Mendy push on in line with İlkay Gündoğan, as can be seen below. 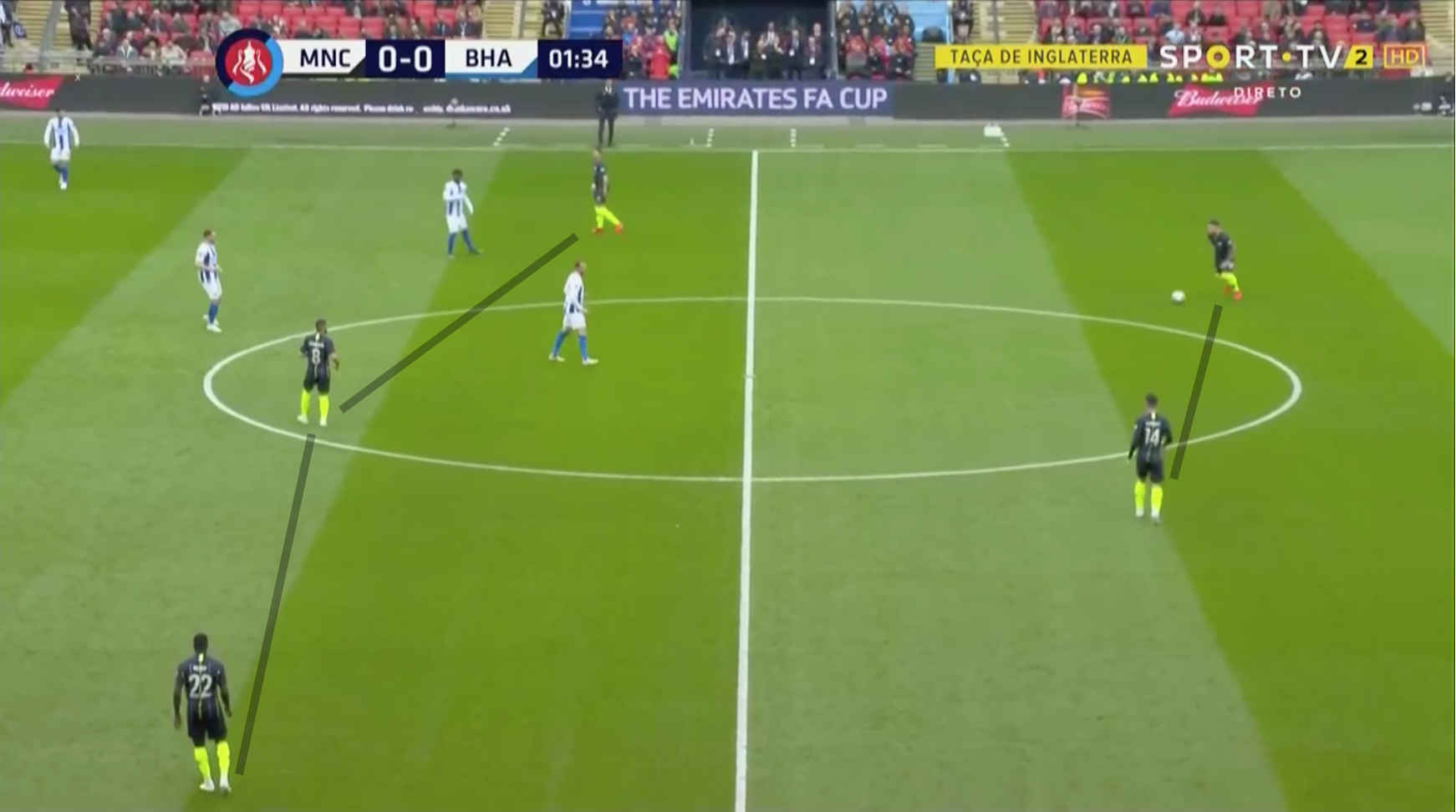 City’s attacking midfielders then morph into the front line, occupying the half spaces like classic inside forwards. The shape of the team when attacking certainly has a classic feel, with the Citizens essentially lined up in a 2-3-5, or what is widely acknowledged to be the first football formation. This can be seen below, with David Silva dropping deep from the front line. 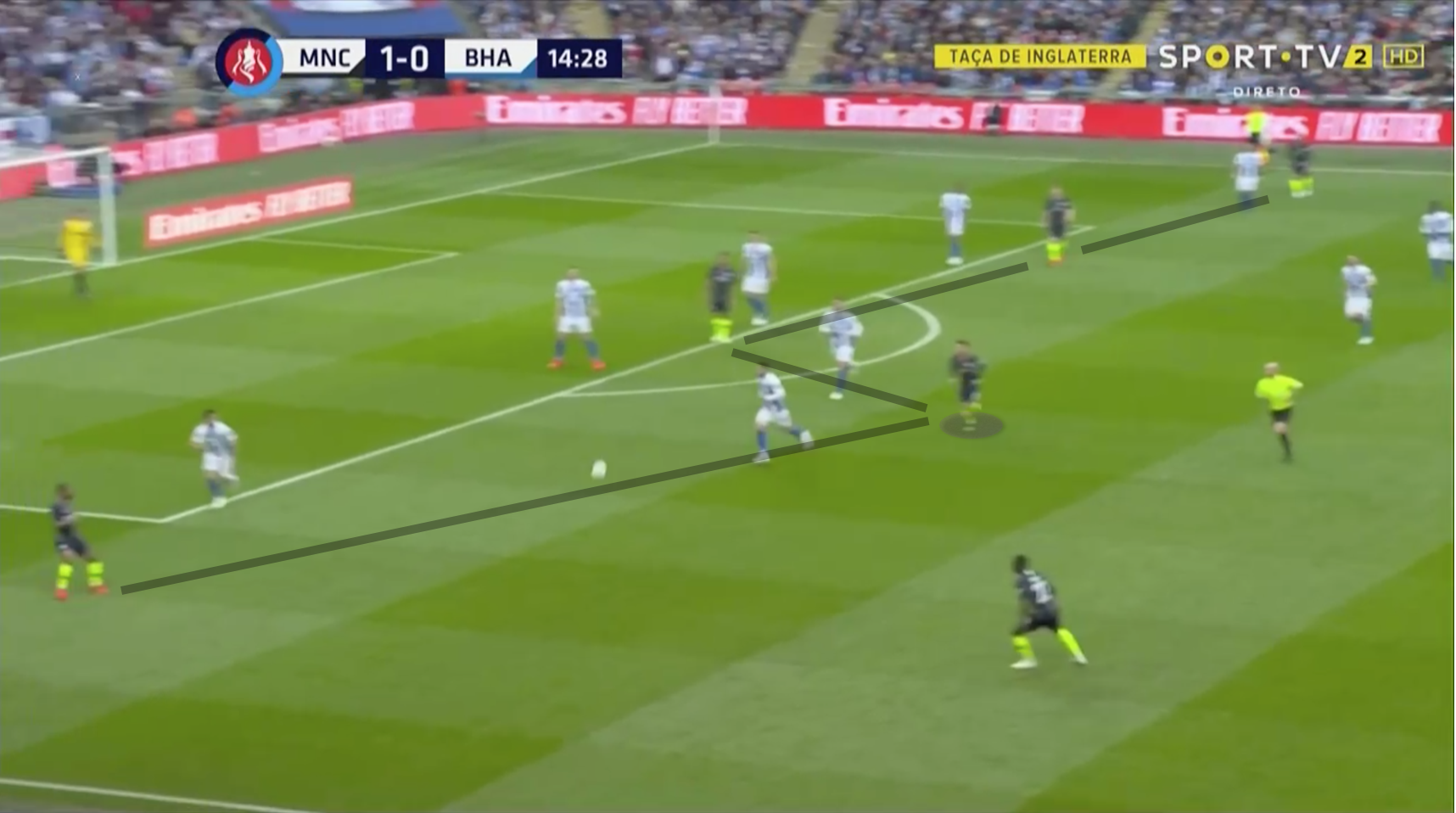 Of course, this is open to some positional rotation. Raheem Sterling’s move inside past David Silva on the image below has pulled defenders away from his channel to open up space for left-back Mendy to utilise. 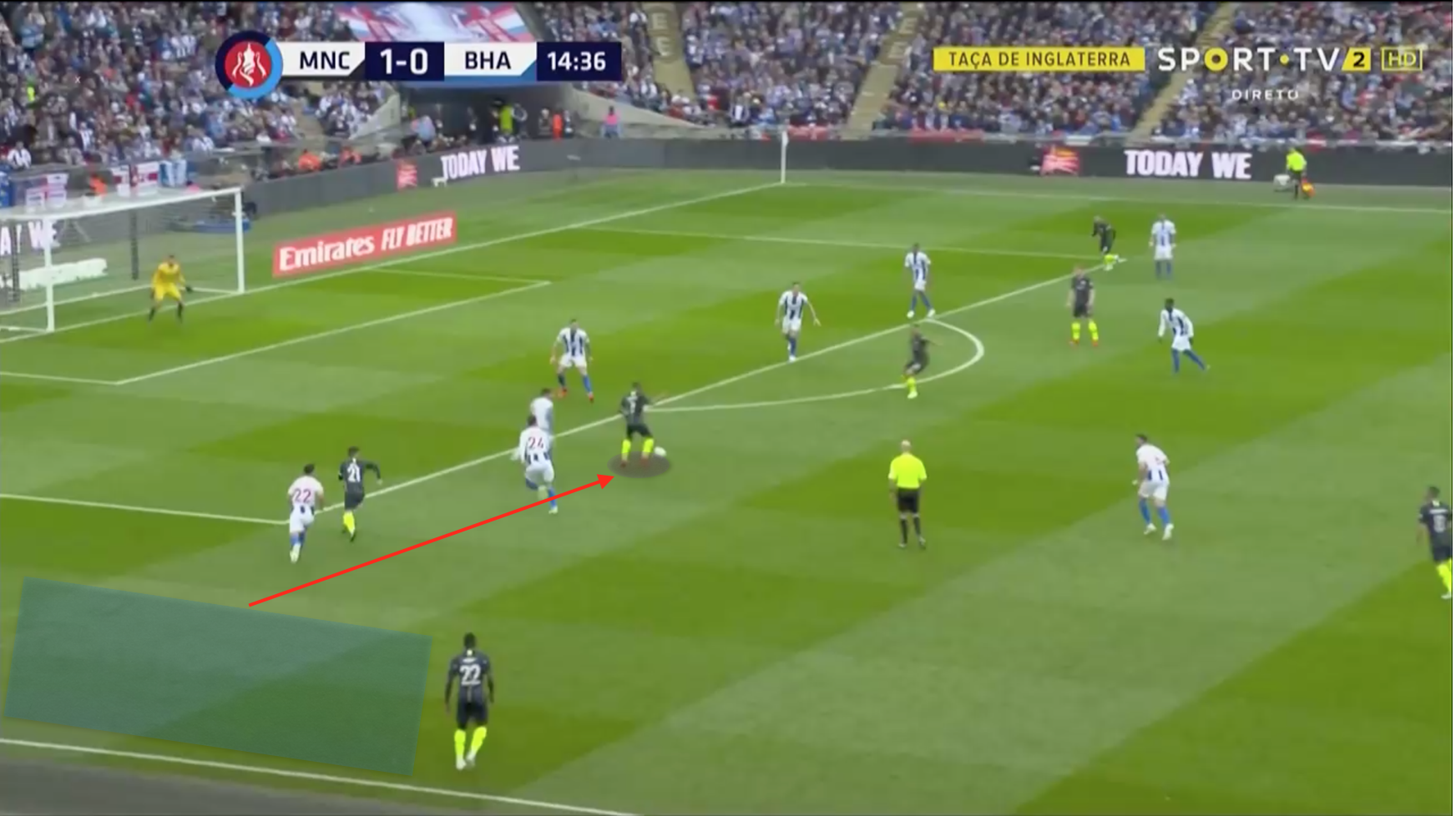 Width is hugely important to Guardiola’s system. This can become even more so against teams like Brighton who will sit deep and look to close off space. Maintaining width can stretch the opposition and open up spaces, which is what happened for City’s goal. 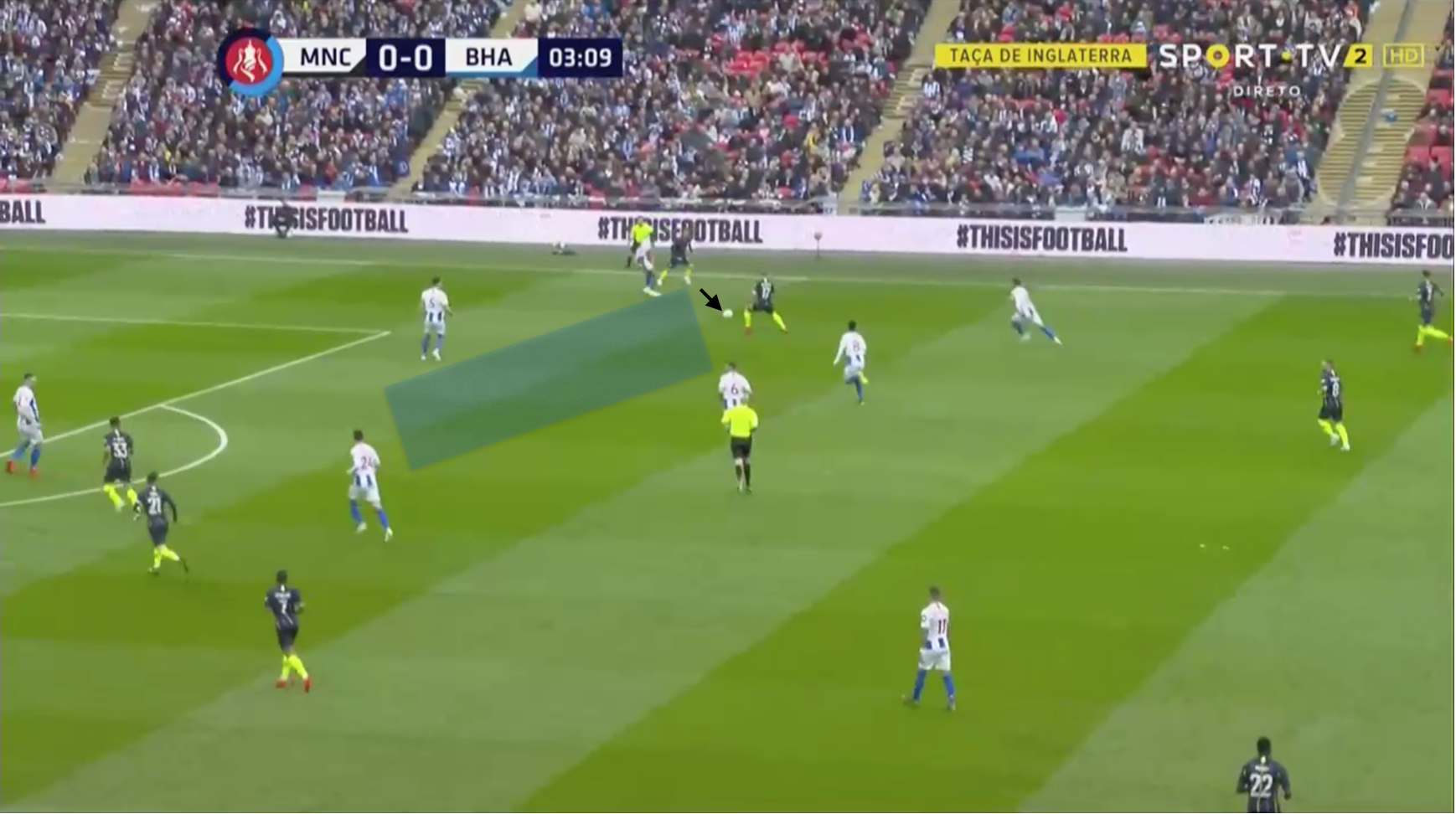 Bernardo Silva, playing on the wing in this match, has strayed right out to the touchline to collect a switched ball. This opens up a gap for Kevin De Bruyne inside of him, to whom he cushions the ball. De Bruyne now has space to pick his cross, and a player of his quality makes it count. His ball finds Gabriel Jesus to head City into the lead.

This is also an example of a move City often like to use. Someone makes a pass to a player (Bernardo Silva) on the defensive line, who lays it back to a different player (De Bruyne) running in behind the midfield line. This catches the midfield on the back foot, allowing for City to find space in between the lines.

Brighton, as expected, were very much focused on defence for this game. They sat back in their 4-1-4-1 shape and tried not to commit themselves and leave space in behind. Below, we can see how they sat off City’s back line when out of possession, and only started pressing when the ball moved into midfield. 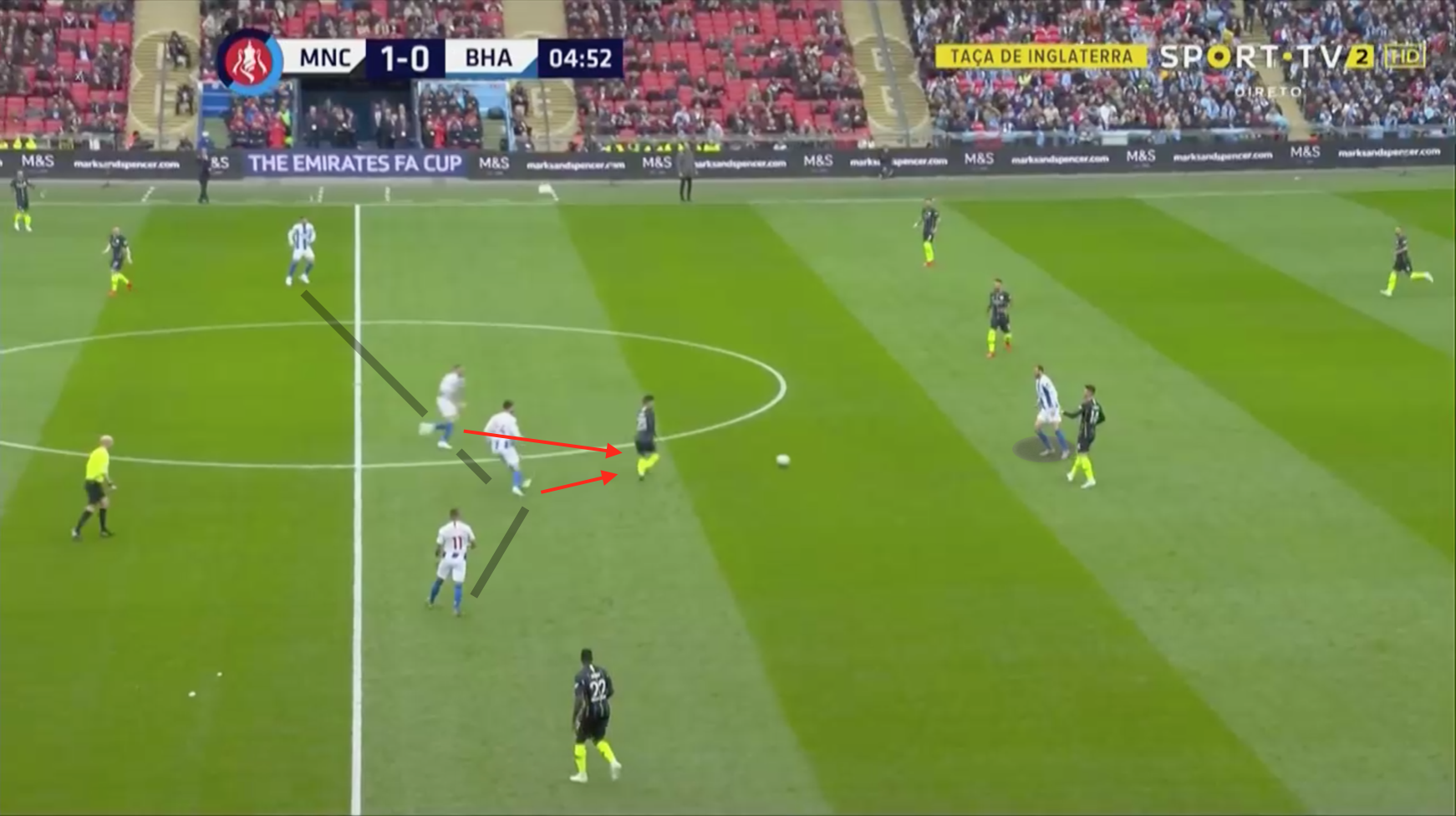 The Seagulls also made a very active effort to stop Kevin De Bruyne. The man tasked with this job was Yves Bissouma. The young Malian midfielder made sure to be effectively controlling De Bruyne throughout the game, even if it sometimes meant breaking Brighton’s usually rigid structure. 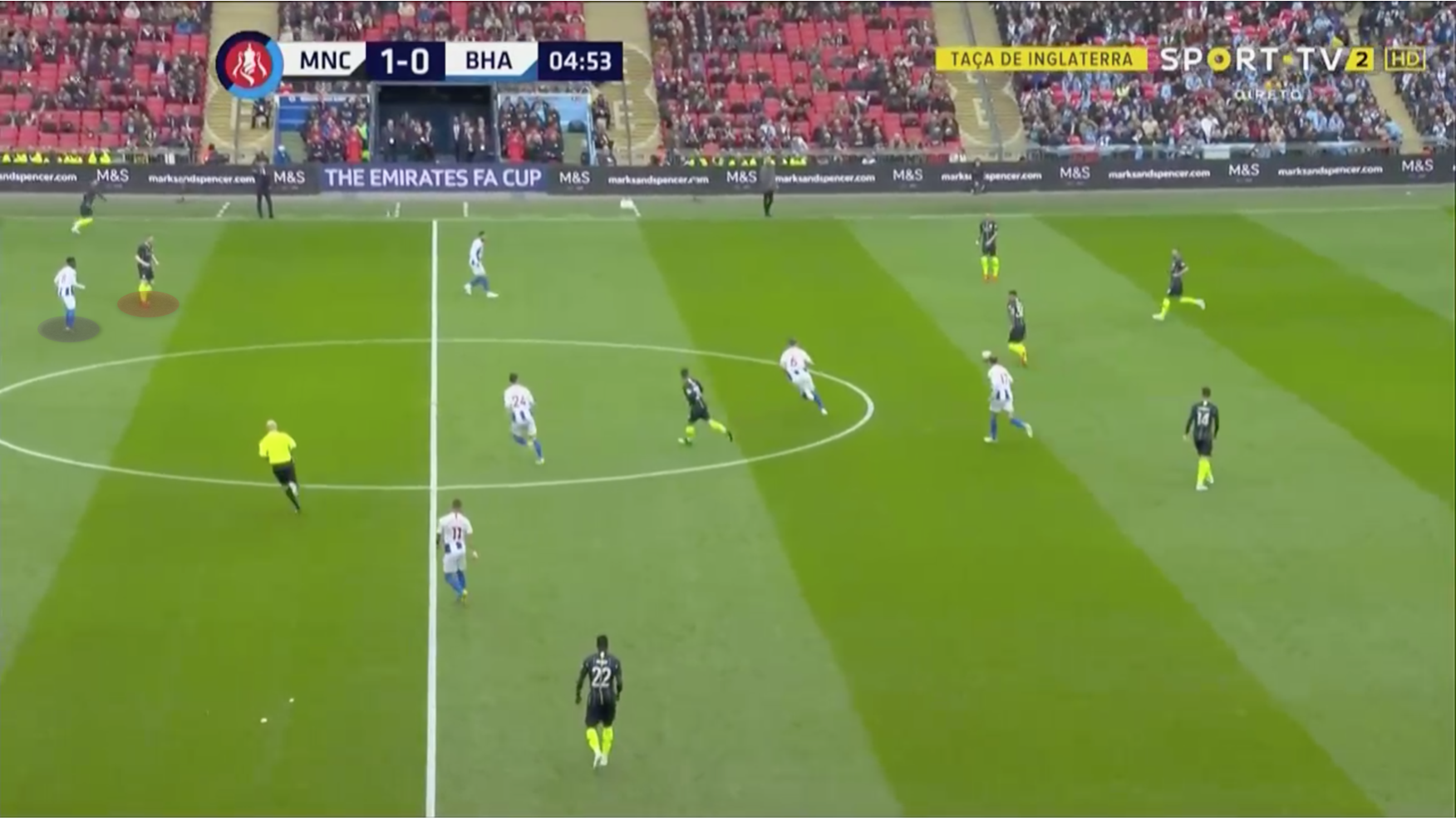 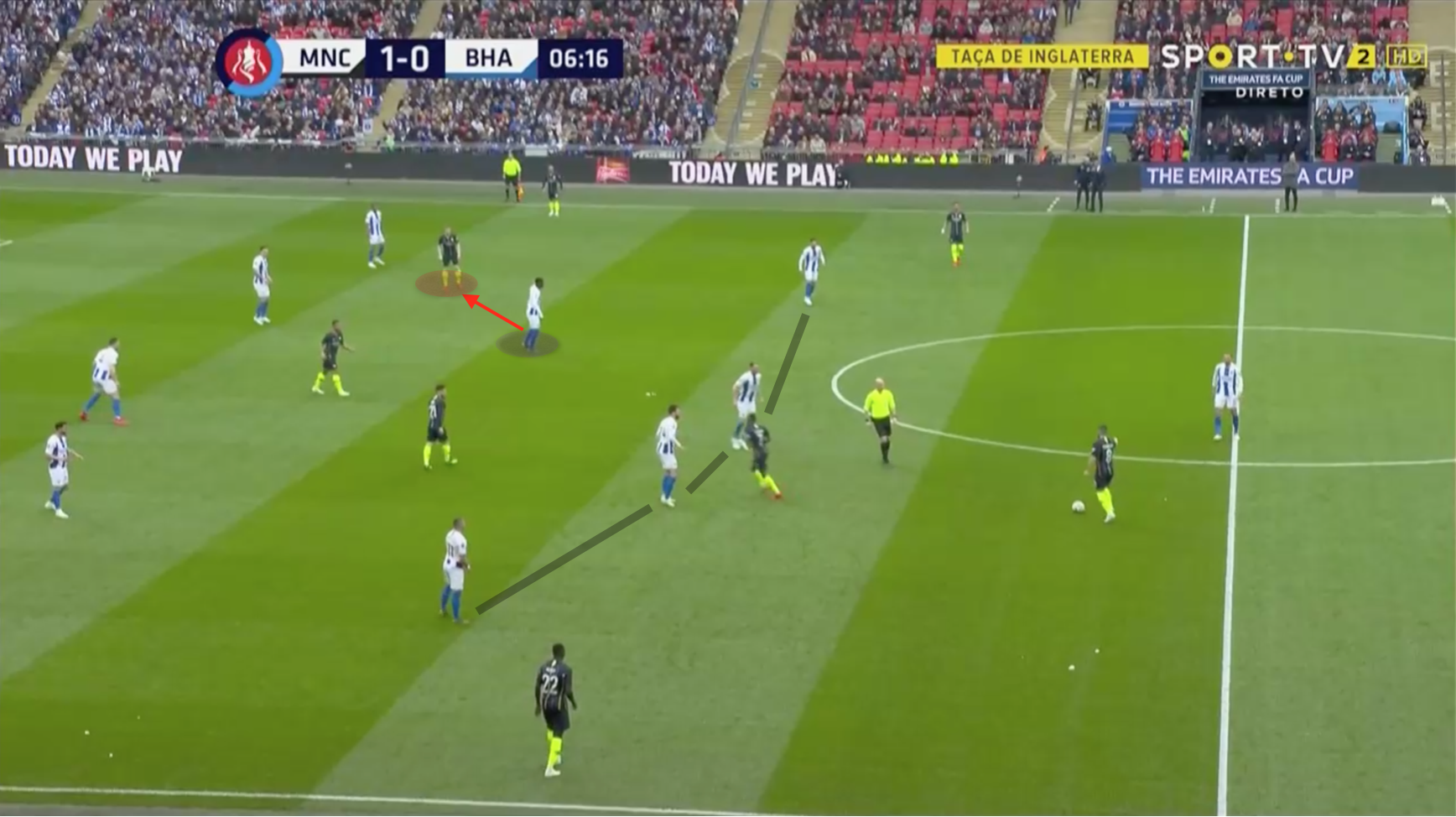 Below, we can see Brighton defending deep in their own half. A wall of five midfielders provides protection for their four-man backline. This did not allow City much space at all, and helped the Seagulls nullify the Citizens for much of the game. Benjamin Mendy in possession has no completely free passing options. 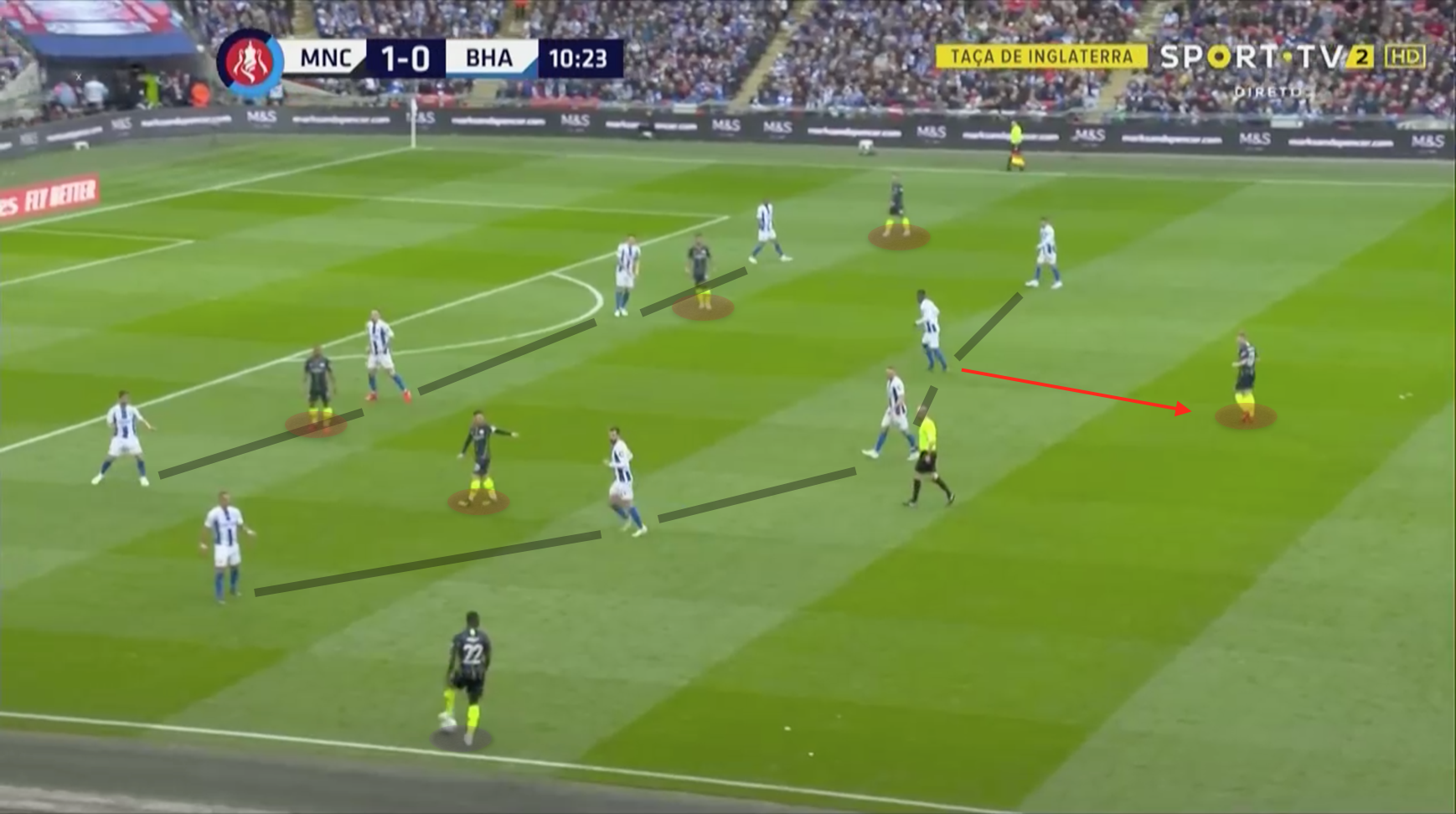 Brighton, as they have done throughout much of the season, relied on dead balls to hurt Manchester City. Thirteen of their 32 league goals have come from set pieces. Anthony Knockaert provided threatening deliveries on Saturday to the ever imperious aerial threats of both Lewis Dunk and Shane Duffy.

With these set pieces, there didn’t seem to be an elaborate plan to deceive the City defence. It appeared more to be a simple matter of getting it to the danger men Dunk and Duffy. In the example below, City deal with this threat by having Aymeric Laporte attack the initial ball to stop Dunk, while David Silva gets himself in the way of Duffy. 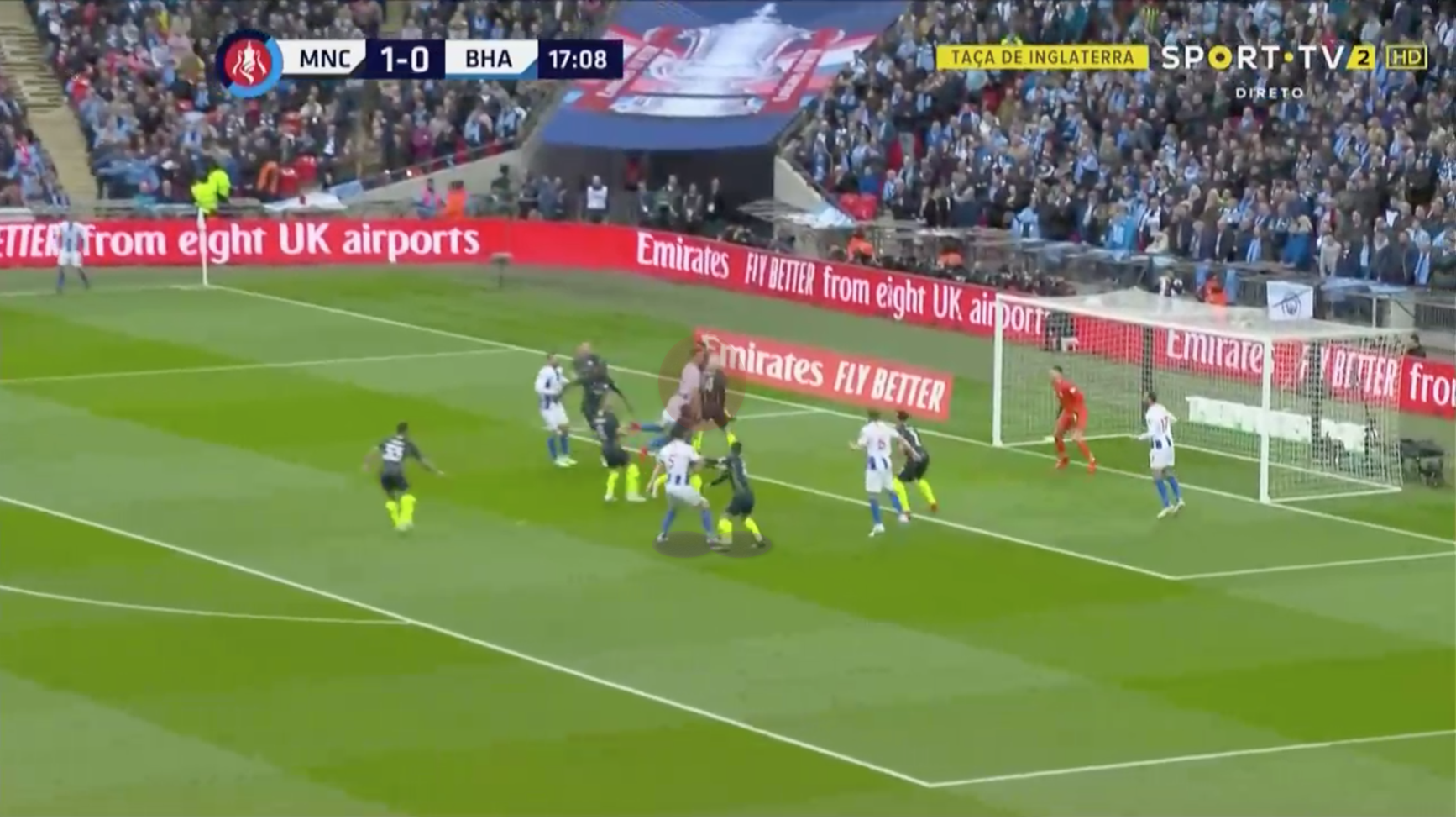 This would indicate that City generally acknowledged the fact that they couldn’t compete aerially with both Dunk and Duffy (as well as Glenn Murray), so instead have chosen to focus on blocking their route to the ball.

This was not a foolproof tactic, however, and Brighton came agonisingly close to equalising when City failed to halt Dunk and Duffy. We can see the runs of the two defenders below. Dunk has easily shrugged off Bernardo Silva while Gabriel Jesus has completely failed to block the run of Duffy. Fortunately for the Citizens, Laporte was on hand to clear off the line. 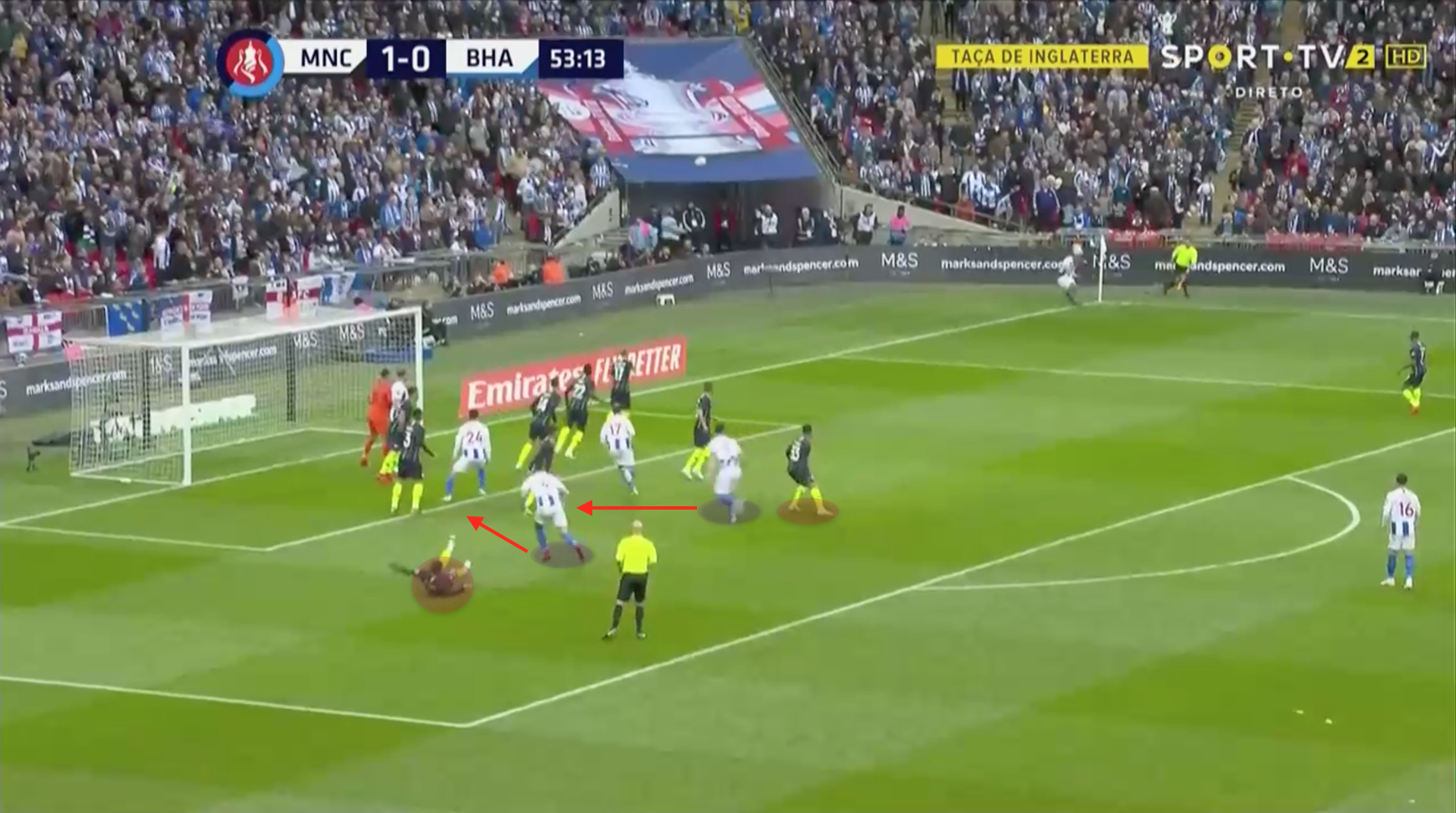 Saturday’s FA Cup semi-final turned out not to be the most engrossing of games. This was, by and large, due to Brighton’s effectiveness in keeping out Manchester City. Their defensive setup gave the Citizens little space to play into, and they struggled to create many clear-cut chances.

After the match, Pep Guardiola acknowledged the Brighton threat from set plays, ruing the amount his side conceded. He was, however, content with the fact that City only allowed “one dangerous situation” from them.

Brighton manager Chris Hughton, meanwhile, praised his side, noting that they “raised the level of [their] performance”. While the Seagulls certainly did put in a stoic performance, they didn’t ever truly trouble City consistently.

Manchester City will face Watford in the FA Cup Final after their epic win against Wolves on Sunday.