A game against Brighton & Hove Albion at Old Trafford was a welcome respite, coming between two vital games. A week before was Ole Gunnar Solskjaer’s most important victory so far, a 1-0 victory over Tottenham Hotspur at Wembley, while in one week’s time comes an FA Cup clash against Arsenal at the Emirates.

The Red Devils’ 3-2 loss away to Brighton in August was an early low-point in Manchester United’s season, so they came into this match hoping to continue their revival under the Norwegian. Under Jose Mourinho, Manchester United struggled to break down teams that defended deep, but their attack under Solskjaer has allowed them to deal with these teams more easily than they have in the years since Sir Alex Ferguson retired.

Manchester United winning 2-1 against a solid defensive outfit in Brighton may not look as flashy as some of their more recent performances. It’s these types of victories though that had become too infrequent in the recent past.

Manchester United made only one change from the team that beat Tottenham a week earlier. Luke Shaw pulled up injured in the warm-up and was replaced in the starting line-up by Diogo Dalot. It was a bit of a surprise that Diogo Dalot lined up at left-back, rather than swapping with right-back Ashley Young. The squad lined up in a 4-3-3, with the same midfield three of Paul Pogba, Nemanja Matic, and Ander Herrera that has worked so effectively during Solskjaer’s reign and has developed an effective understanding together.

Brighton boss Chris Hughton made no changes to the side that played well but went down 1-0 to Liverpool. The Seagulls played in a 4-5-1, with 35-year-old Glenn Murray leading the line. One of the primary strengths of Brighton is the partnership of Lewis Dunk and Shane Duffy in central defence. However, they were missing former Valencia player Mathew Ryan, their number one goalkeeper, who is currently away on international duty with Australia at the Asian Cup.

Ole Gunnar Solskjaer’s men line up defensively in a 4-2-3-1, with Ander Herrera and Nemanja Matic sitting as defensive midfielders and Paul Pogba operating ahead of them. This allows Pogba to assist in pressing high up the field, staying in more dangerous positions for the counter-attack. It is a similar role to how he lined up in Serie A with Juventus. Herrera and Matic operate together to help shield the backline. Herrera provides more mobility and physicality, while Matic relies instead upon better positional sense.

Having these two midfielders sitting deep is important for Manchester United as it allows their full-backs to operate much higher up the pitch, as shown in the picture above. The midfielders stay deep during the build-up, providing passing options as United build from the back against Brighton. It was common to see Matic or Herrera provide a central passing option, while the other would move laterally into the half-space as the ball progressed up the pitch.

As Manchester United moved into the third phase of play against Brighton, as shown above, they would move into a 4-3-3 with Matic staying in a deep central position, looking to recycle possession as both Paul Pogba and Ander Herrera were in advanced positions on the edge of the box. These players would look to play quick combinations with the attacking line. This was effective several times to slip players into the channels between Brighton’s full-backs and centre-backs.

Another feature of United’s attack in the final third against Brighton was on the left side. , As the makeshift left-back, Diogo Dalot played very high up the pitch, providing almost all the width on the left side.

Martial tended to hug the touchline, but often behind Dalot as he looked to receive the ball with space to take on the right-back. His tendency to stay close to the touchline also opened the left half-space, where we often saw Paul Pogba operate as well as Marcus Rashford.

Marcus Rashford has looked superb since Mourinho’s departure, scoring five goals in seven games playing as the central striker. He has been a threat getting behind the centre-backs, looking to use his speed to shred defenders. Against the Seagulls, however, he played a different style.

With Brighton playing such a deep line, there was no space for Rashford to run into. Instead, he tended to drop between the lines. As shown in the graphic below, he received many of his passes between the lines, in the left half-space. 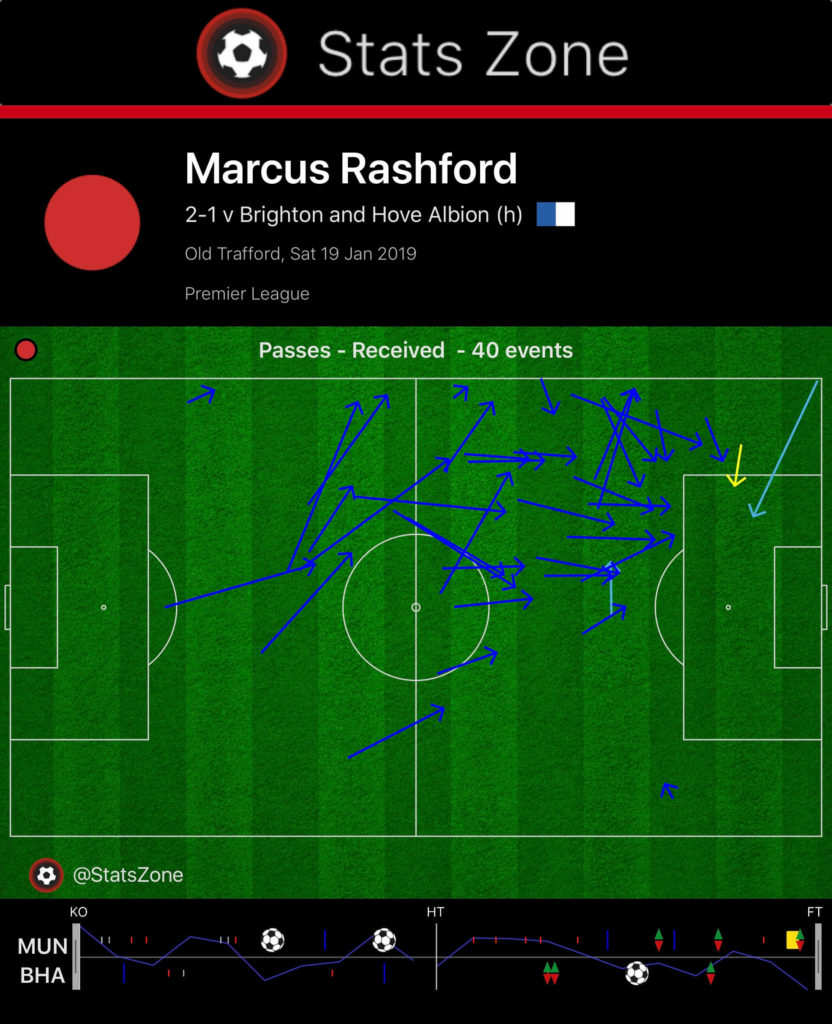 This is an area that Paul Pogba has excelled in under the Norwegian. In this game, he played well with Rashford also operating in this space. As shown in the play below, a common tactic was for Rashford to drop off the centre-backs into the half-space, while Pogba would surge ahead to attack the backline.

United’s second goal came from the work in this area. Rashford dropped deep to flick the ball onto Dalot, before moving forward into the channel between former Barcelona defender Martin Montoya and Lewis Dunk to receive the return ball and score from a tight angle.

Lingard moves around a static defence

Last week against Tottenham Jesse Lingard played as a false nine. He harassed their central defence and dropped deep with the ball, allowing space for the wide attackers to surge into. This week though he returned to his position on the right side of the attacking line but continued to show how versatile he is in Solskjaer’s system.

He found plenty of space between the lines, drifting into the right half-space to take advantage of a gap in Brighton’s defensive structure. The Seagulls lined up in a 4-5-1 defensively, but left winger Jurgen Locadia stayed higher up the pitch to provide an out-ball for Brighton’s backline and provide some support to an isolated Glenn Murray up front.

This meant that Gaetan Bong had very little support, as shown above, when Jesse Lingard drifted infield to sit between the lines. He also had to worry about Ashley Young providing width down the touchline.

Above we can see that it isn’t Ashley Young providing the width, but Paul Pogba who has moved across to operate in the space wide of Bong. The full-back has gone inside to help close the space down for Lingard, but Matic is able to locate Pogba in space out wide, which eventually leads to Bong conceding a penalty to the Frenchmen.

Manchester United continued their winning run under Solskjaer, now up to seven in a row in all competitions. They played well against a determined Brighton squad who had just a week earlier fought hard to hold a prolific Liverpool side to a single goal. Brighton defended well but struggled to deal with the work between the lines of Marcus Rashford and Jesse Lingard. This was a key factor in both of United’s goals in this 2-1 victory.