It is a commonly held belief within football that there is no point in paying attention to the league table until at least ten games have been played. Up until this point teams are still finding their feet, new signings are settling into their new teams and luck is still playing a significant role in results. After ten matches, however, we have a large enough sample size to start making more informed judgements on the performances of teams up and down the league table.

This match marked that point in the league calendar as both sides played their tenth fixture although, to this point, their league form has been markedly different, with both sides currently sitting at different ends of the table. Liverpool have been keeping pace with Manchester City at the top of the table whilst Cardiff City are currently battling to stay clear of the relegation zone.

The league form of the two sides to this point promised to make this an interesting match between two sides with contrasting styles, Cardiff, under their coach Neil Warnock, are a side intent on forcing the opposition to open them up before looking to play quickly on the counter-attack. Liverpool on the other hand, under Jurgen Klopp, are one of the most proactive and forward thinking clubs in European football and the emphasis from them is very much on taking the game to the opposition.

What we saw, in the end, was a comfortable win for the home side but it was the slight changes in tactical structure and positional slots from Liverpool that made the match interesting, from a tactical point of view. 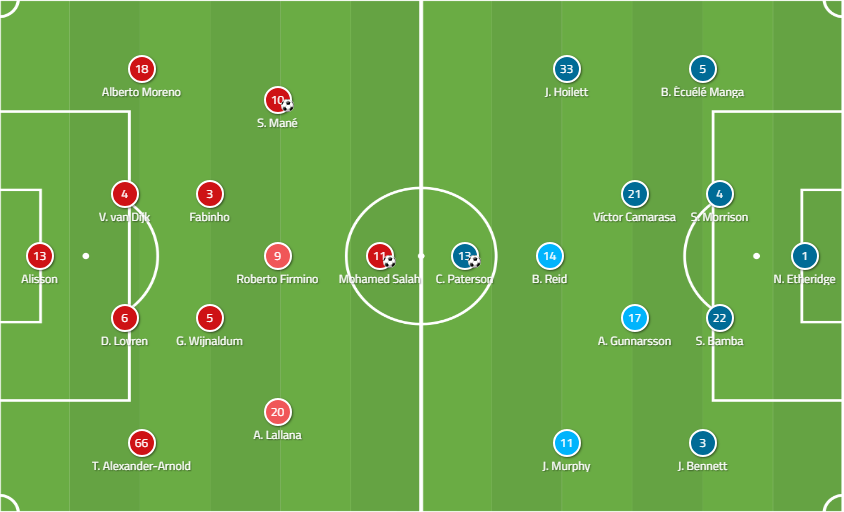 The first thing of note when the teams were announced and lined up on the pitch was the slight positional changes for Georginio Wijnaldum and Roberto Firmino. I have long held the opinion that the Dutch international midfielder Wijnaldum would be perfectly suited to play as the ‘6’ in Klopp’s system, in this match, we saw this but not as we would normally from Liverpool. The normal midfield structure from them sees a number ‘8’ as the double pivot and then two number ‘8’s in more advanced positions. Here though, we saw Liverpool play with two ‘6’s’ in Wijnaldum and Fabinho who would form a double pivot.

The second interesting change saw Roberto Firmino line up in a more traditional ’10’ slot. This would see him take up many of the same positions that he normally would but from a deeper starting position and with a player ahead of him in the attacking line.

Cardiff lined up in their traditional 4-4-1-1 shape with Bobby Reid playing just behind Callum Patterson in the attack.

I touched on the fact that Klopp switched here to a double pivot as the base of the midfield but it is such an interesting change that it requires closer and more thorough analysis. In using Fabinho and Wijnaldum as two controlling midfielders at the base of the midfield, Liverpool exerted almost complete control over Cardiff as the away side struggled to find a way to stop Liverpool from progressing the ball forward.

Here, we see Liverpool in an established attacking phase with the ball firmly planted in the final third. From this position, even if Cardiff were to win the ball back cleanly, they would struggle to progress the ball forwards given the deep positioning of the two central midfielders for Liverpool. Fabinho, in particular, is extremely adept at covering across the width of the field to cover for his full-backs as they advance forward into high positions.

The deep position taken up by Fabinho and Wijnaldum also offers Liverpool a quick passing option in order to escape from pressure and circulate the ball back across the pitch. Both players have the ability to play quick, vertical passes forward through the opposing defensive lines, as the ball is circulated back and across to them, the opposition defensive structure will have to readjust, this will create passing lanes that can be exploited in order to access the opposition penalty area.

As the ball comes to Fabinho, he has two passing options in order to progress the ball, the third option is to drive forward in possession of the ball himself, something that is firmly in the Brazilian’s skillset. In the end, he chose the penetrative pass between the opposition defenders to a man in space behind.

Throughout the match, one of the most common ways that we saw Liverpool move the ball forward was through passes in between the defensive lines of Cardiff, in fact, when I was analysing this match, I commented on social media that Cardiff were poor structurally and that this allowed Liverpool the time and space to play through them. It was pointed out to me that actually, Cardiff were solid defensively but Liverpool were strong in finding ways to move the Cardiff defensive structure to one side before playing through them.

This was a valuable point that I need to apply to my own analysis, sometimes, it is easy to focus on what a team is doing badly whilst not appreciating that it is actually something that the other side are doing well that is causing the issues.

Here, is a case in point. Liverpool have possession deep in their own half with Virgil Van Dijk in possession of the ball. The Cardiff line of engagement is deliberately deep as they look to allow Liverpool to enter their own half before engaging and pressuring the ball. One of the strengths of Liverpool under Klopp is the way that they can rotate positionally in order to force pockets of space to appear in between opposition lines. Here, the Liverpool player has created a pocket of space that allows a driven vertical through pass from Van Dijk.

As soon as this pass is played, the player collecting possession of the ball will be able to turn and drive into space.

This time, we see the way that Liverpool look to create passing lanes to progress the ball forwards. The initial pass out to the full-back is a first line pass in order to move the opposition player. The wide midfielder is attracted out to the full-back before the ball gets pushed back to the initial passer. There is now a passing lane open and the ball can be played through to Mane as he makes a run off of the defender.

Roberto Firmino as the ’10’

Roberto Firmino is one of the few top-level footballers who can be described as unique in terms of his player ID. He is a centre-forward who understands the defensive nuances of the game and operates extremely effectively in the pressing system favoured by Klopp and his coaching staff.

In this match, he operated in the main as a more traditional ’10’ in the hole behind Mo Salah, who played centrally. From this position, the ability of Firmino to drift into pockets of space and occupy the half-space made it extremely difficult for Cardiff to organise their defence effectively.

Here, we see the positioning of Firmino in the attacking phase for Liverpool. As they enter the final third of the pitch, Firmino has positioned himself in the half space for a vertical pass from the ball carrier.

His positioning and the threat that he poses attracts not only the defender behind but the defender in front as well. As the ball is fired into Firmino’s feet he is able to immediately to turn it out to the wide area where Liverpool have a player in space that is able to advance.

Had the ball just been played immediately out to the wide player, then the wide defender would immediately look to move out and engage. Instead the first pass, into Firmino, effectively freezes the defender and allows Liverpool to play into space.

An interesting match and the 4-1 scoreline did not flatter Liverpool, Cardiff did well to hold out for as long as they did before conceding three times in the second half.

Liverpool showed here that they are tactically flexible. This speaks well of the quality of Klopp and his coaching staff and of the squad that they have constructed over the course of the last three years. Indeed, with these extra tactical mechanisms in place, you would not bet against them running Manchester City very close for the league title this season.