Excessive punishment for Betis in 1-1 draw against Alaves

The La Liga match between Betis and Alaves was an intriguing prospect. Although the former are not where they’d like to be in the table, they are implementing a very interesting football philosophy. Alaves, meanwhile, are one of the surprises of the season as they fight for European qualification.

The tactical analysis of the game shows an unfortunate draw, especially for Betis, who showed the intent to grab all three points throughout the whole game. Alaves showed some glimpses of football but after managing to equalise, they focused on holding onto their point. Defensively they performed accordingly and accomplished their objective.

Betis started the game with a 3-4-3 setup in line with the style that Quique Setien has been coaching into his team. They employed wide players in attack, constant use of both wings and careful but effective elaboration through possession.

Meanwhile, Alaves started with a 4-5-1 with the clear objective of populating the middle of the pitch to cut the build-up creativity of Betis, while using Jonathan Calleri as a pivotal player when attacking. 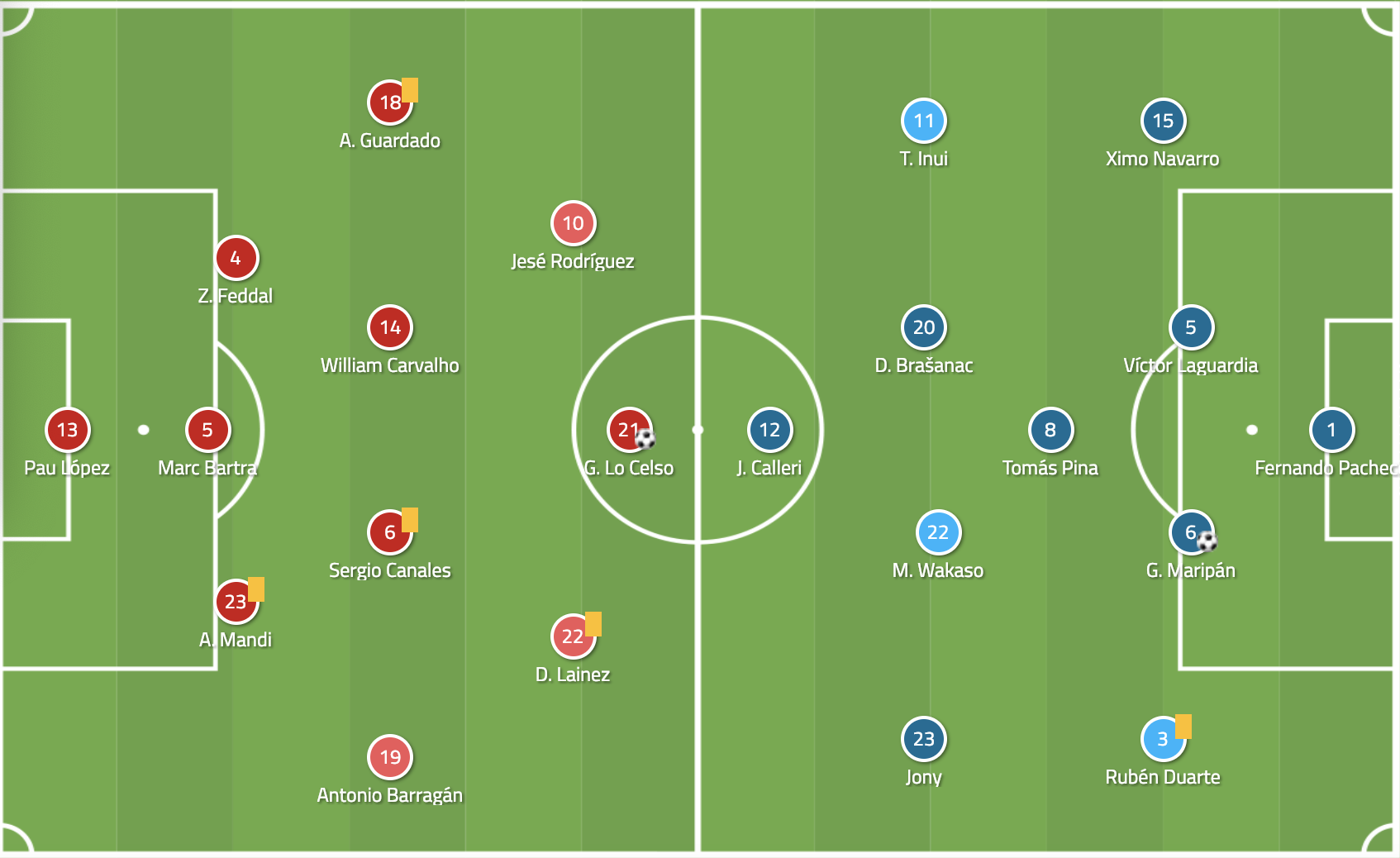 Their respective attacking tactics were initially, and during most of the first half, as expected. Betis were very patient to pass the ball in the middle of the field, looking for spaces to open. When space was found to advance forward, they would transition to a faster and wider game that allowed them to find several 2v1 situations on the wings.

Unfortunately many were wasted on bad decisions. Their attacks would usually have four or even five lines of attack, with Lo Celso, Jese, Lainez and Guardado pushing forward, most of the time supported by former Real Madrid midfielder Canales and Barragan.

On the other side, Alaves were unable to hold possession under the high pressure of Betis. Even though they had five players in the middle of the pitch, they were not able to connect short passes to build up from the back. They lacked the patience and mobility in the middle to increase the circulation of the ball in order to create spaces. Instead, they focused mostly on cutting the attacking movements of Betis. 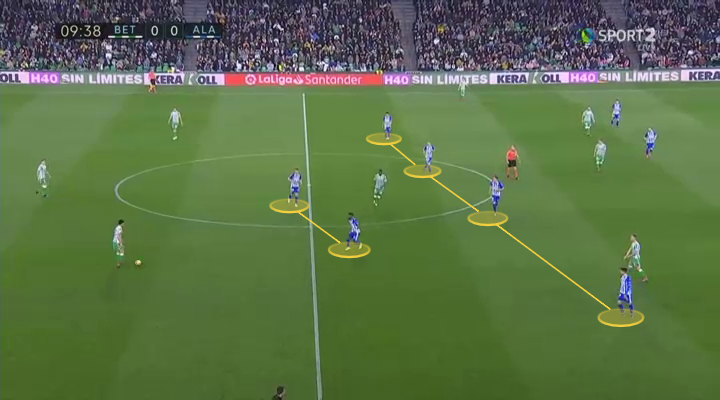 This resulted in a very long team that relied almost solely on long passes to Jonathan Calleri, the sole striker. Although he was able sometimes to receive the ball and hold possession, usually connecting with Jony, they were both too far from Betis goal area to create any real danger.

Statistics from Sofascore show that Alaves tried 60 long balls during the game compared to 47 of Betis. Moreover, only 22 were successful for the away team (36%) compared to 30 of Betis (64%). 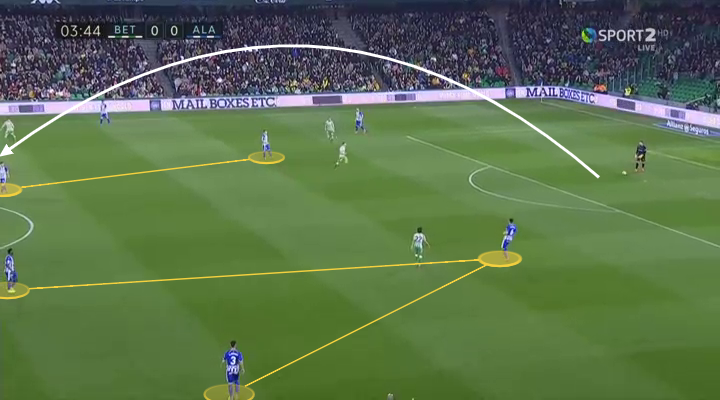 Although Alaves mostly started pressing closer to the middle of the pitch, some situations demanded higher pressure. This was an uncomfortable situation for them that showed some very uncoordinated movements when pressing high that resulted in large pockets of space being left in the middle that Betis took advantage of.

The opening goal came after such an Alaves attack in which they pressed high without success. It ended in an effective Betis counter-attack that Lo Celso finished after a lucky ball that Maripan hit unintentionally. But the Chilean defender had his revenge shortly after, and what revenge it was. The ball was cleared off the line after Jese had got past the keeper with the goal completely open, leading to a free kick into Betis area. The home team were not able to clear, and Maripan grabbed the equaliser. It is noteworthy how Maripan, the tallest player of Alaves, was left unmarked during the whole sequence after the first header.

Second half: Only one team tried to win

The second half was similar to the first, but took place more in Alaves’ half of the pitch. The visiting team put aside any intention to attack, positioned themselves even closer to their own goal area and spent their time trying to disarm any Betis attack. Meanwhile, the home team kept trying to penetrate their rival’s defence, and they had clear chances to win that were either missed or were prevented by Fernando Pacheco. 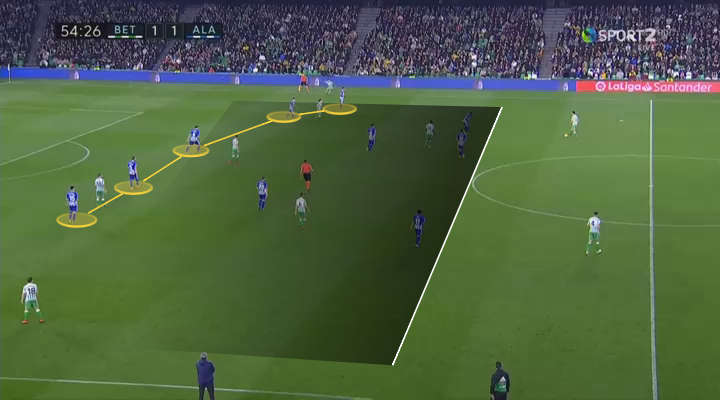 Betis understood that Alaves positioned closer to their goal and that their attacking strength was weak. In response, they positioned both wide midfielders, Guardado and Barragan, higher up. The former was no surprise as he is a more attack-oriented player, but Barragan became almost a right winger.

This movement gave more freedom to young Mexican Lainez as he started to move across the whole attacking line. This allowed him to participate more, but he was not sharp enough. He lost some easy balls and was less precise than usual when passing, and eventually ended up being taken off. This attacking scheme continued when Joaquin entered the game. Betis gained depth on both wings with a lack of finishing precision the main barrier to them to winning. 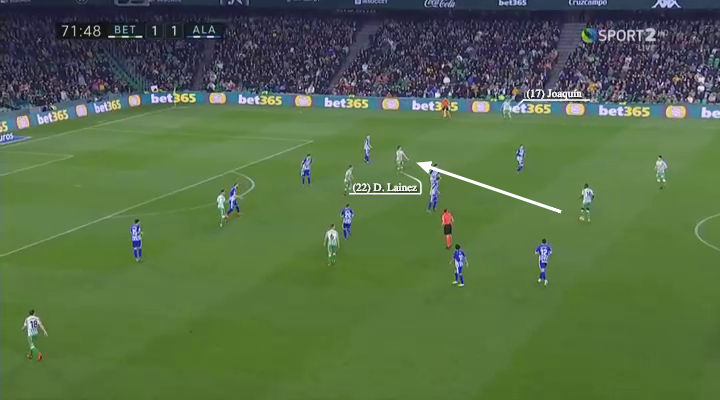 Key also to Betis build-up movements was the performance of William Carvalho. He had an essential role in cutting out the few attacking attempts of Alaves, but more importantly he was the main channel to progress forward. He was the constant pass alternative for defenders and he was usually involved all the way to Alaves’ penalty area as an important support in attack. 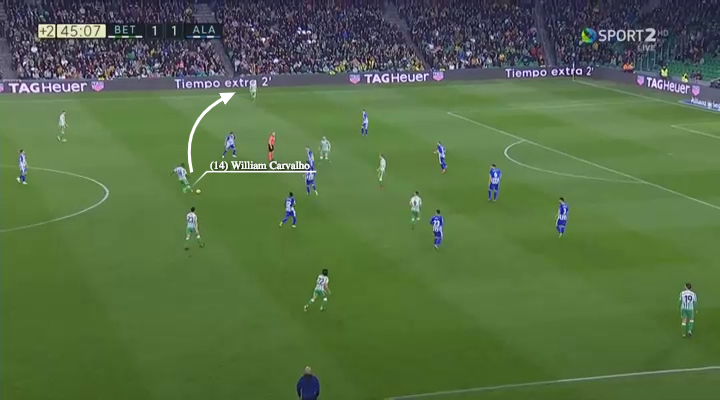 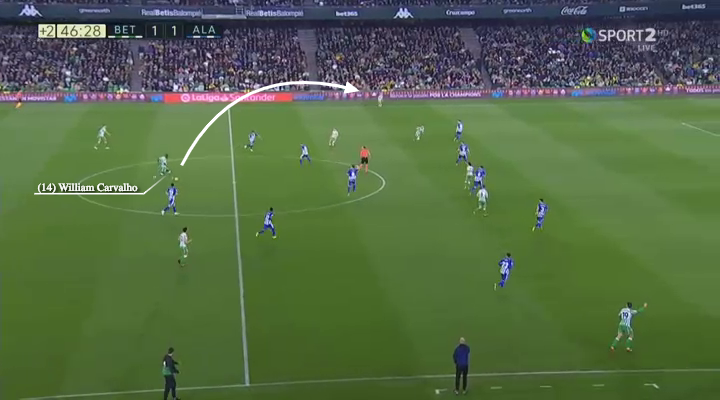 As Alaves had a very populated midfield, Betis’ path to create more danger was to move the ball quickly from the middle to the wings. This meant they had to try to avoid the orderly shift of the Alaves defence to the relevant wing.

This meant several long cross balls looking for Lainez, Joaquin, Barragan or Jese, most of them from Carvalho, and then having a high number of players attacking through all channels. On average Carvalho plays about five long balls per game with 61.7% accuracy, while in this game he had 14 long balls with 12 of them (86%) accurate. 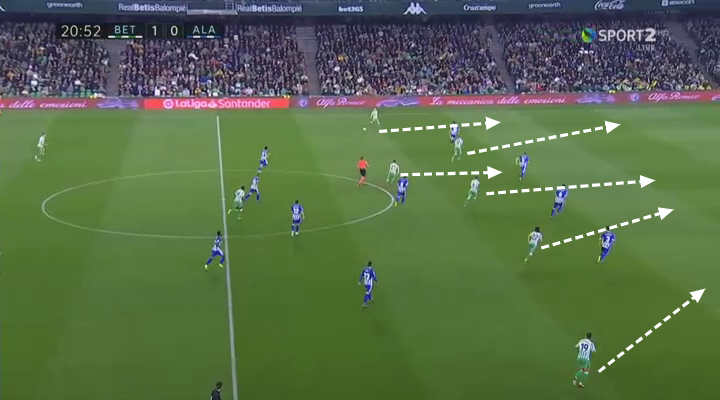 Alaves did almost nothing to score during the second half. While Calleri had a clear chance close to the end of the game, any build-up intention lasted only seconds. Brasanac and Wakaso were not satisfactory options to try to move the ball forward and create attacking opportunities. The latter especially had a very disappointing performance. He was very erratic when passing, lost possession on several occasions and was out of rhythm compared to what the situation dictated. He was correctly substituted by Abelardo.

Defensively, Alaves they were able to manage a tough game, where they had little help from their teammates to have the game played further from their goal area. Fernando Pacheco and Guillermo Maripan put in good performances and were key in keeping the clean sheet after the first goal.

Finally, the game came to an end with a 1-1 tie that leaves happier Alaves fans. But if you are not obsessed with results and believe in long-term processes that create attacking, possession-based styles of play, you would have appreciated Betis’ performance. They imposed their style of play, they had several and very clear chances to score more goals, but some details left them without three points.

They used all the attacking channels, were quite unpredictable and managed to overcome the defensive positioning of Alaves. Betis fans ought to be happy with the path the team is taking.