As the La Liga 2021/22 was proceeding to the final stage of the season, Real Madrid secured the title and Barcelona were able to move into second place. Sevilla still had a lot to fight for because they were trying to finish above Atlético Madrid. However, this week with two games to go, they dropped to the fourth place as Julen Lopetegui’s side recorded another draw, this time against Mallorca.

There were many questions regarding whether Sevilla should stick with Lopetegui next season, and with this game, we could spot some problems of his team that occurred in this calendar year repeatedly.

This tactical analysis will explain Sevilla’s game system with possession, but also something Lopetegui was unable to solve.

Sevilla had a good squad with many options, almost two in every position despite Fernando Reges and Suso were injured. For example, despite Ivan Rakitić, Óliver Torres, and Thomas Delaney starting on the bench, their midfield trio still looked so strong as it was formed by Nemanja Gudelj, Joan Jordán, and Papu Gómez. It was a 4-1-2-3 formation from Lopetegui but as usual, a huge scale of rotations was involved.

Mallorca were fighting to stay in the La Liga for next season, but after losing to Granada 2-6 with a 4-3-3 formation, Javier Aguirre swapped to back three to add one more man in the last line, and that made Sevilla more difficult to break them.

Rotations to drive the team

Lopetegui was a head coach with a very clear idea of playing football, and his Sevilla since 2019, had been using a lot of rotations and positional interchanges to transport the ball forward. In this game, they had more control at the beginning with these tactics. 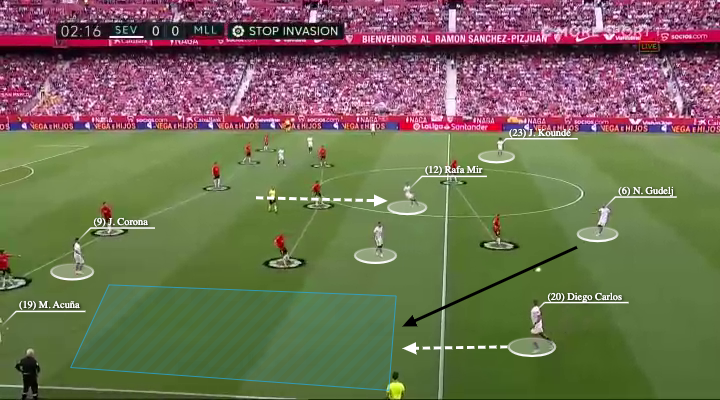 For example, their 6, Gudelj, would always drop into the first line to make it a back three. That created a 3v2 numerical advantage for Sevilla to overload the first line, so they could beat the first line with one pass by using the wide centre-back and the outside space of the formation, as Diego Carlos received in the above image. Also, the three-man second line of Mallorca was unable to cover enough ground horizontally,

And you could see the players in other positions moved accordingly. As Marcos Acuña moved forward to vacate the blue zone for Carlos, Tecatito (Jesús Manuel Corona) moved into the half-space. Meanwhile, there was so much freedom given to the striker, Rafa Mir, as he could drop out to look for the ball if he wanted to. 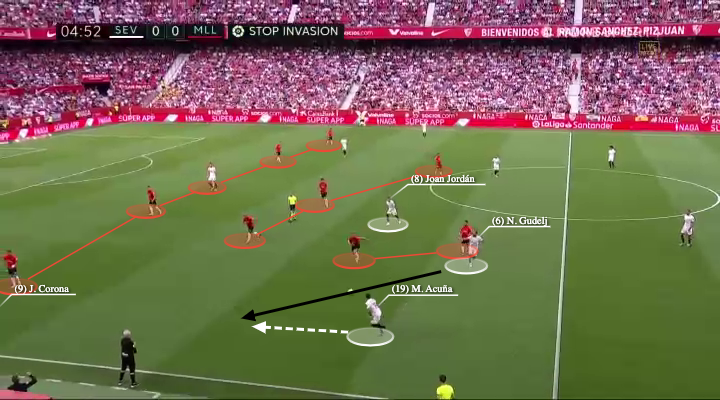 In this alternative scenario, we could see how Sevilla were able to construct with a similar concept, despite the shape looking differently. This time, Gudelj did not drop so deep but he was able to transport the ball to the outside space, as Acuña arrived from deep to create the same situation as the previous example. Also with the likes of Jordán staying a bit deep, Sevilla engaged the second Marlloca line in the centre so they could go out on the flanks. But this position of the 8, or even the whole structure, would be questionable as we explained more in the analysis later. 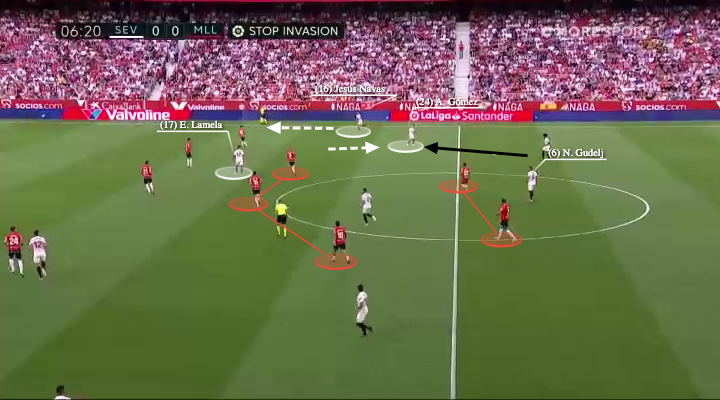 And here comes the rotations, especially in the early period, their 8 on the right side, Gómez, would always drop out to receive the ball at his feet. To create the condition for the former Atalanta man, the right-back, Jesús Navas would also dash forward simultaneously so to ask the Marlloca players question. To vacate those spaces for Navas, ideally, Erik Lamela should also move inner so the rotation was anti-clockwise as shown here on the right side. It usually allowed Gómez to turn and face the goal and even drive forward.

But you could also see that there was a small issue within Sevilla’s structure, which is that there were too many players wanting the ball at their feet, or even dropping out. For example, the question would be asked on Tecatito and Lamela, were they providing enough threats in behind, or 1v1 threats on the defenders? Because if they did not, then, like in this game, the last line was not fixed and it was easier for the opponents to close them in the midfield. 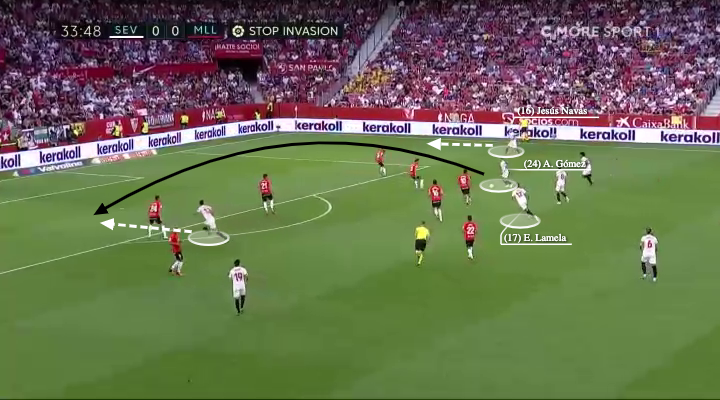 And because of the question we raised, Sevilla had problems when it came to breaking the last line in this game. From Marlloca’s perspective, they were very happy at dropping a bit deeper and defended the box with numbers, but at the same time, Sevilla were unable to create good conditions with quality final balls. We often saw them playing crosses, some of them were threats, but there were also some of them were headless, as that was their solution to create a chance. But again as shown in the above image, with the rotations, sometimes they had limited numbers in the box because the winger (Lamela) moved out deep, while the 8 was not even arriving given they were too deep in the construction process.

Hence, although Sevilla were able to enter the last third, many of their attacks ended up in crosses (41) into the penalty zone, the deliveries could come from every possible angle, but it was also a bit messy in that sense. Some of the huge chances were from the crosses but we could not neglect the fact that Sevilla players were unable to attempt in the free header, as there were a lot of Marlloca defenders in the box too.

But then, we moved to the second part of the analysis to explain why they had so many frustrations in 2022.  The chemistry between coaches and players might be a reason, as we saw Lopetegui had the passion, but as the recipients, were the players reacting? From a tactical perspective, there was also something arguable in Sevilla’s game system. We must stress that 71.5% possession, and 2.67 xG from 18 shots was not a poor performance, but this section was more about outlining their struggles so far. 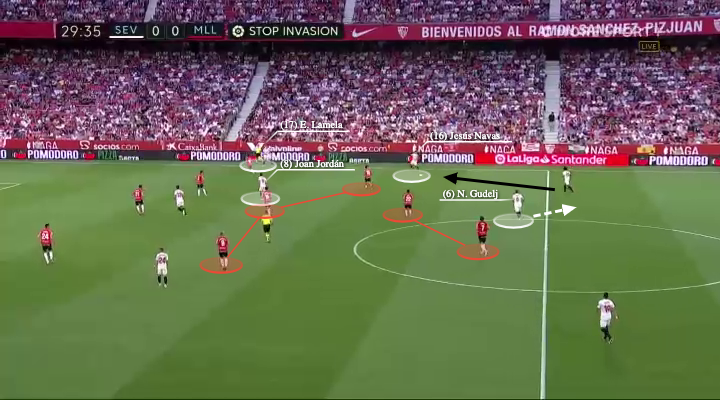 Firstly, it was about the interconnectedness of players, as Gudelj, the 6 of Sevilla always dropped deep to the first line, and the host was not in balance in the shape. In the above image, we saw Jordán and Lamela high and behind the second line, and Gudelj was going to position between the centre-backs, so Jules Koundé could pass the ball forward in half-space as we explained.

In those situations, ideally, Sevilla should break with their rotations and quick combinations on the flanks as there were three players, but it was also difficult given the opponents defended with a line of five. But then, when it was not workable on the ball side, can they move the ball to the opposite flank? Those were the days Lopetegui had Éver Banega, an excellent passer who could switch the ball diagonally, but Sevilla already did not have this kind of passer, they needed a structure to give more options to the ball, especially the support should be formed with different heights and depths. However, in this situation, they were missing an option between the first and second Marlloca line, and the ball could not go laterally in spaces from Navas even though enough depth was created, they were stuck. 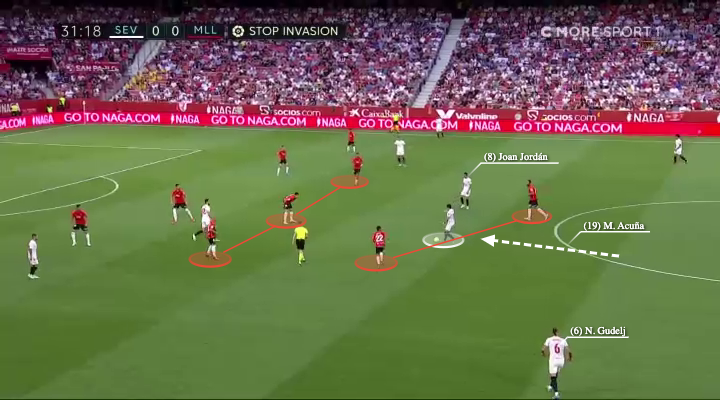 And sometimes it became an even more worrying situation if they conceded counter-attacks from bad structures. The problem of Sevilla was that they have no midfielders with a game picture in their head, and also with the willingness to play, and the ability to support in good positions, plus the game intelligence to take reasonable actions.

As a result, the players on the ball were not given enough passing options at times, including Acuña in the above example. Jordán occupied a space in the midfield but he was not creating enough space for himself to receive, and then everyone was behind the line and no one wanted the ball. Meanwhile, the 6, Gudelj was not even close enough to support in a reasonable distance, and so Acuña felt that he was isolated, when he was asking for teammates to support, Mallorca took this chance to press and they win the ball back. 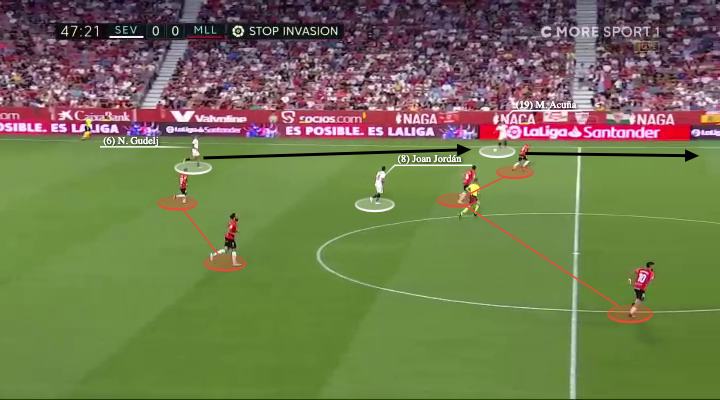 When it came to rotation, it was good when it helped the team to create the conditions in the build-up. But there were also disadvantages as the players would be ended up in the “wrong” position when the ball movement was too quick.

For example, Sevilla progressed the attack with good rotation here, Gudelj dropped to pick up the ball in the first line, then Jordán came to take the 6’s space, and so the second line of Marlloca was broken and Acuña could send a ball forward to Tecatito. 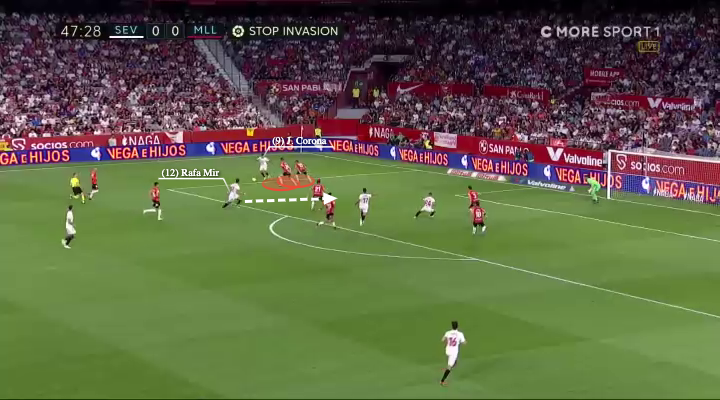 However, since Jordán was so deep, that means when Tecatito received the ball, he was without the support of the 8 in the half-space. Even though he could receive, Mallorca committed the wing-back and the central defender to close him, make it a 2v1, and it was almost impossible to solve by dribbling. But there was no support from the left-back, or the 8, and so Sevilla were stuck here.

(Mir was close but he was not that sort of player who connects teammates well, instead, he ran forward into the crowd quickly and did not give Tecatito an option) 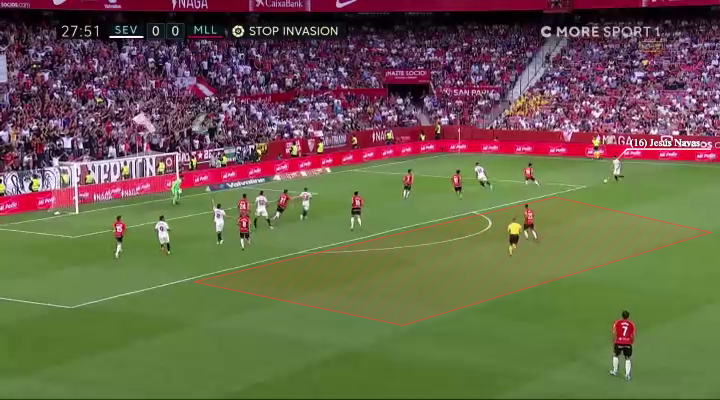 And regarding the crosses, as explained, they could pose threat, but sometimes Sevilla got it wrongly without properly set up a rest defence structure. Then, they were exposed and vulnerable in the transitions as they were unable to pick up the second balls in the rebound zone.

For example, in the above image, Sevilla committed so many players in the penalty zone but Mallorca had eight outfield players in there as well, but Aguirre’s side had a two-man rest offence with Vedat Muriqi and Ángel Rodríguez. As we highlighted in the red zone, when the second ball bounced in there, there would be no Sevilla players there but Rodríguez was ready for it. 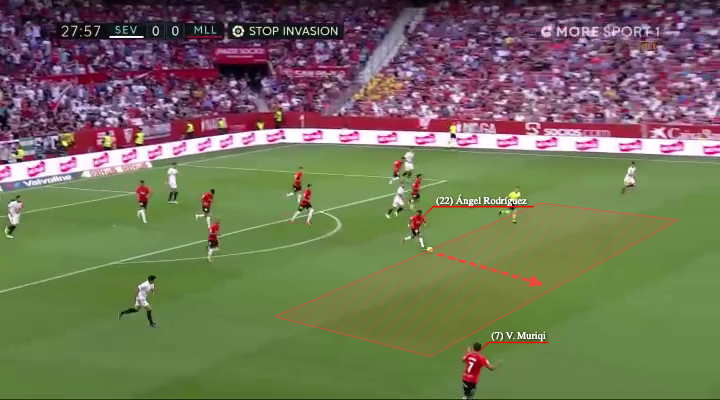 And as a result, they let the opponent come in transitions as Rodríguez had big spaces to drive forward, as well as Muriqi supporting instantly. Part of the reason for conceding that space was because Gudelj was simply so deep, and then there was no midfielder to close that space.

Whether it was a disappointing campaign from Sevilla was arguable, as Lopetegui was likely to bring his team into the top four, and with only four league losses in this season, in terms of La Liga, they might lack the consistency to push themselves into a better position but it was not that bad compared to the results before. But if you considered their performances in cup competitions, being knocked out in the UEFA Champions League, and in the first round of the Copa del Rey, that was not as good as the first two seasons. Lopetegui was one of the most experienced and established head coaches in the world, and he still had two years of contract with the team, and it would fall to the board of management to decide whether he would continue as the head coach of Sevilla next season, but certainly, some changes should be made within the squad or within the coaching staff.