A showdown in the Basque Country saw Athletic Club take on fellow European hopefuls, Villarreal. To add an element of intrigue, both sides fielded an all-Spanish starting XI.

The match was not without controversy as the home side earned two harsh, yet justifiable, penalty kicks. Pau Torres was the unlucky victim of the game-winner. Though his hands were behind his back, his elbow protruded from his side by approximately 10 centimetres, making contact with the ball and stopping its trajectory to goal. Raúl García sent Sergio Asenjo the wrong way on a 56th-minute spot-kick, sending the Bilbao fans home with three points and renewed hope for a top-six La Liga finish.

In this tactical analysis, we investigate the tactics that produced the 1-0 Athletic Club victory, as well as an analysis of Villarreal’s transitions from defence to attack. 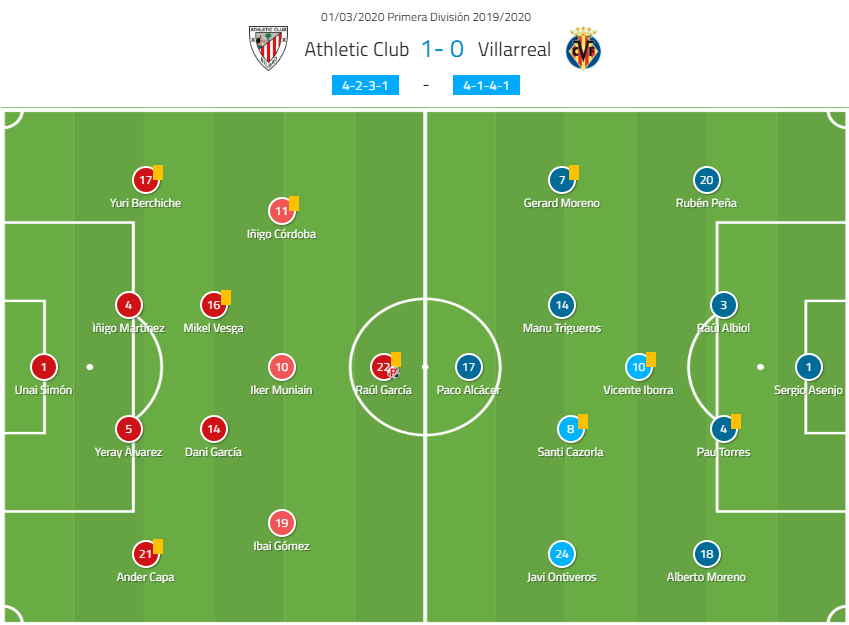 Gaizka Garitano set his side out in a 4-2-3-1. Unai Simón started in goal with a backline consisting of Íñigo Martínez and Yeray Álvarez in the centre, Yuri and Ander Capa on the wings. Mikel Vesga and Dani García played double pivot while Iñigo Córdoba, Iker Muniain and Ibai Gómez operated in attacking midfield roles. García was the lone striker for Los Leones.

Javi Calleja’s Villarreal countered with a 4-1-4-1. Asenjo started in goal, producing a man of the match performance to keep El Submarino Amarillo in the match. He counts a penalty save and one goal allowed on 2.81 xG as his match accomplishments. Making up his defence were Rubén Peña, Raúl Albiol, Pau Torres and Alberto Moreno. Vicente Iborra manned the pivot as Manu Trigueros and Santi Cazorla played in front of him. Gerard Moreno and Javi Ontiveros picked up the starts on the wings and Paco Alcácer was the lone striker.

Villarreal’s transitions from defence to attack

A languid first half from both sides (at least where attacking is concerned) saw them struggle to generate meaningful chances from comparable possession percentages (53% for Bilbao, 47% for Villarreal). Chance creation was so poor that the two sides combined for fewer shots on target (one) than head clatters (three). Given that Bilbao consistently kept four players behind the ball, Villarreal struggled to produce meaningful chances, recording a mere 0.67 xG for the game, 0.2 of which came on a missed breakaway opportunity in the 12th minute.

The side defended in a 4-1-4-1, but, as soon as it managed to win the ball and establish a safe possession, player movements led to a 3-4-3 in attack. Both outside-back pushed high up the field and the two wide midfielders pushed higher up the pitch, occupying the nearest half-space. Iborra would then either drop into line with the centre-backs or just in front of them, giving Villarreal three central players to oppose any Bilbao counterattack.

Trigueros, Albiol and Torres led the side in passing attempts, showing that Villarreal wanted to play from the back and establish clear-cut positional attacks. In 36 attacks, Villarreal managed 27 positional attacks (75%), five of which produced shots, a lowly 14% statistic in the positional attacks with shots category. Due to the congestion in the central channel, Villarreal relied heavily on crosses, sending 17, connecting on just 4, leading to a 24% success rate. Though progression was certainly easier in the wings, the chances created from those attacks were poor. 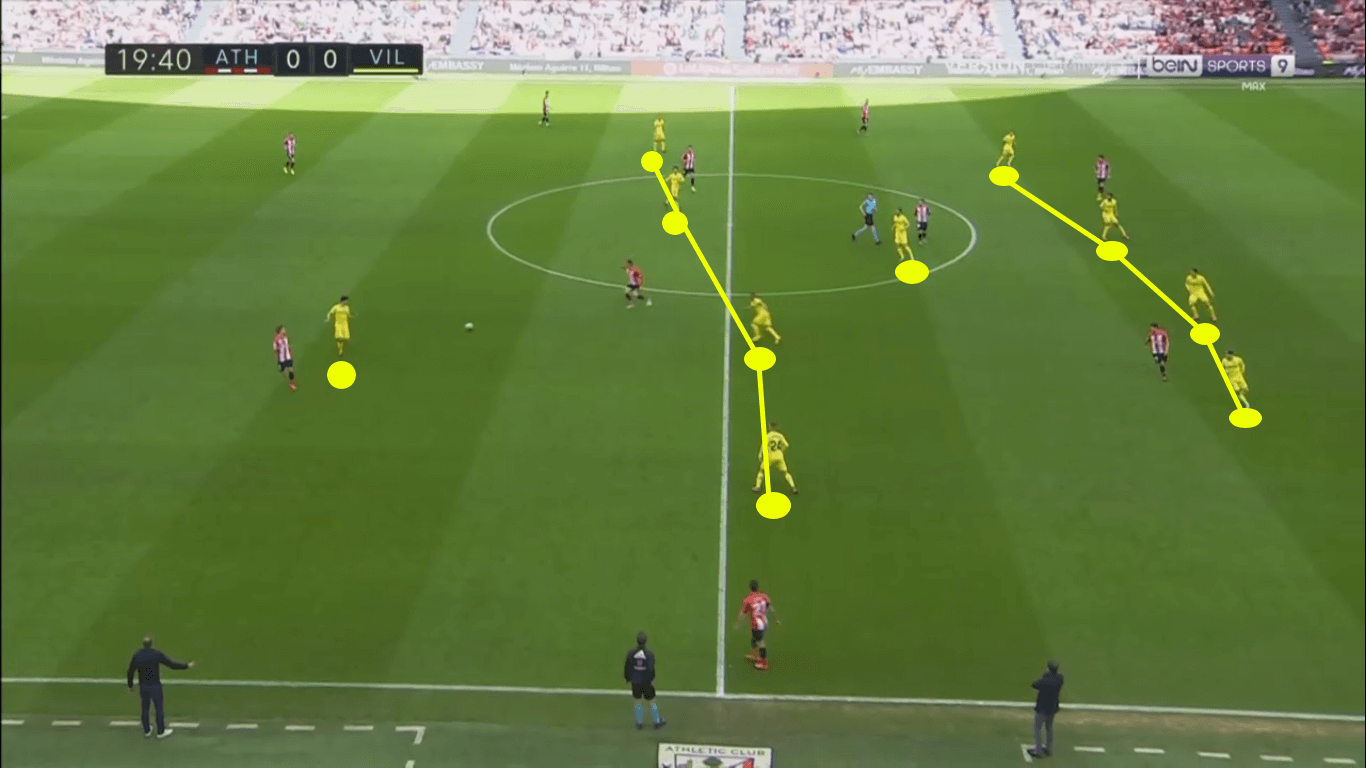 Here we see Villarreal set up in a middle block. The lines are reasonably connected in terms of their verticality. In terms of the side’s width, the only real issue in this instance is the pocket of space conceded in the central channel. During a poor first half, Villarreal had issues controlling the middle of the pitch and struggled to counter-press effectively, registering 15.5 passes per defensive action (PPDA) despite the intention to apply pressure high up the pitch. 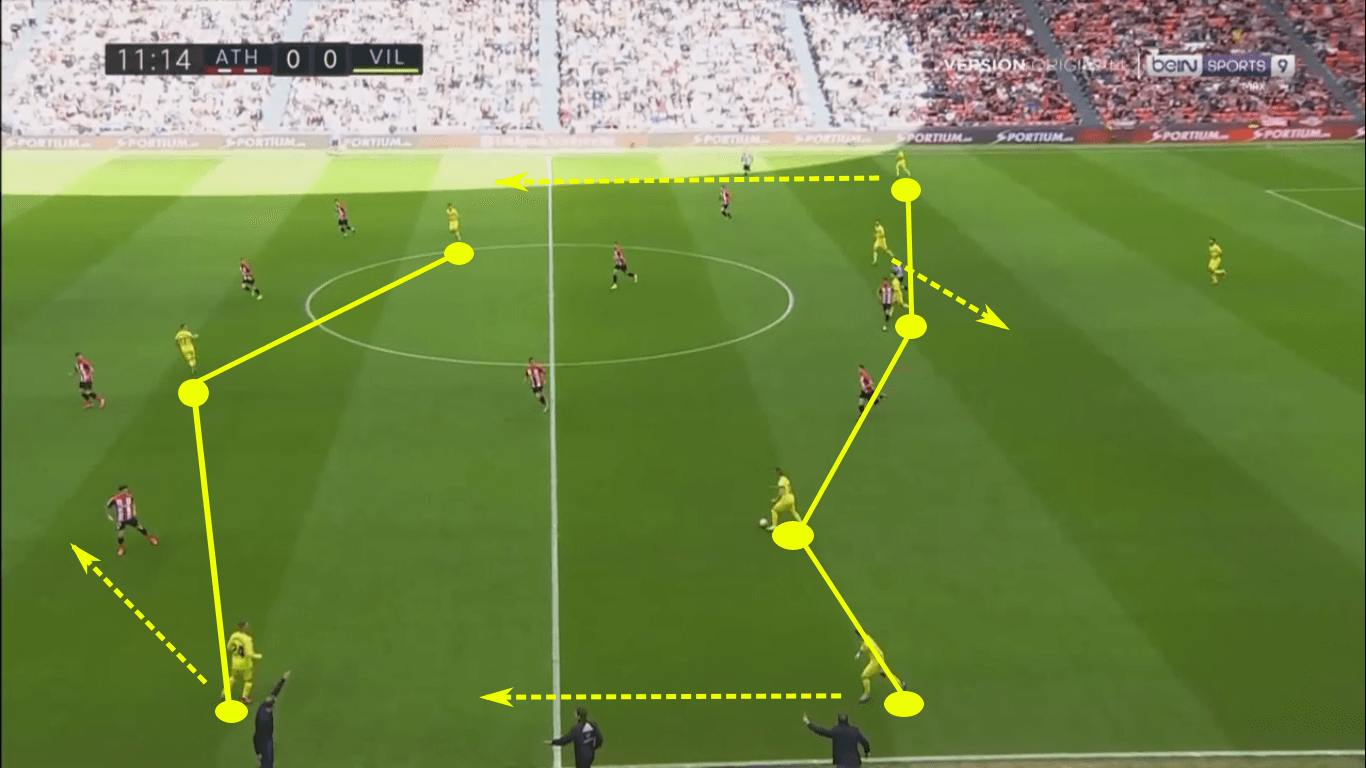 From that 4-1-4-1 defensive shape, Iborra would frequently drop between his centre-backs in the build-up before moving further forward as Villarreal moved into the attacking half of the field. With Athletic Club dropping all 11 players into a low block, the opposing forwards were his positional reference point, staying in close proximity to them. His positioning released the two outside-back to push higher up the pitch, which pushed the wide midfielders higher and into the half-spaces. The resulting movement gave the look of a 3-4-3 in attack. 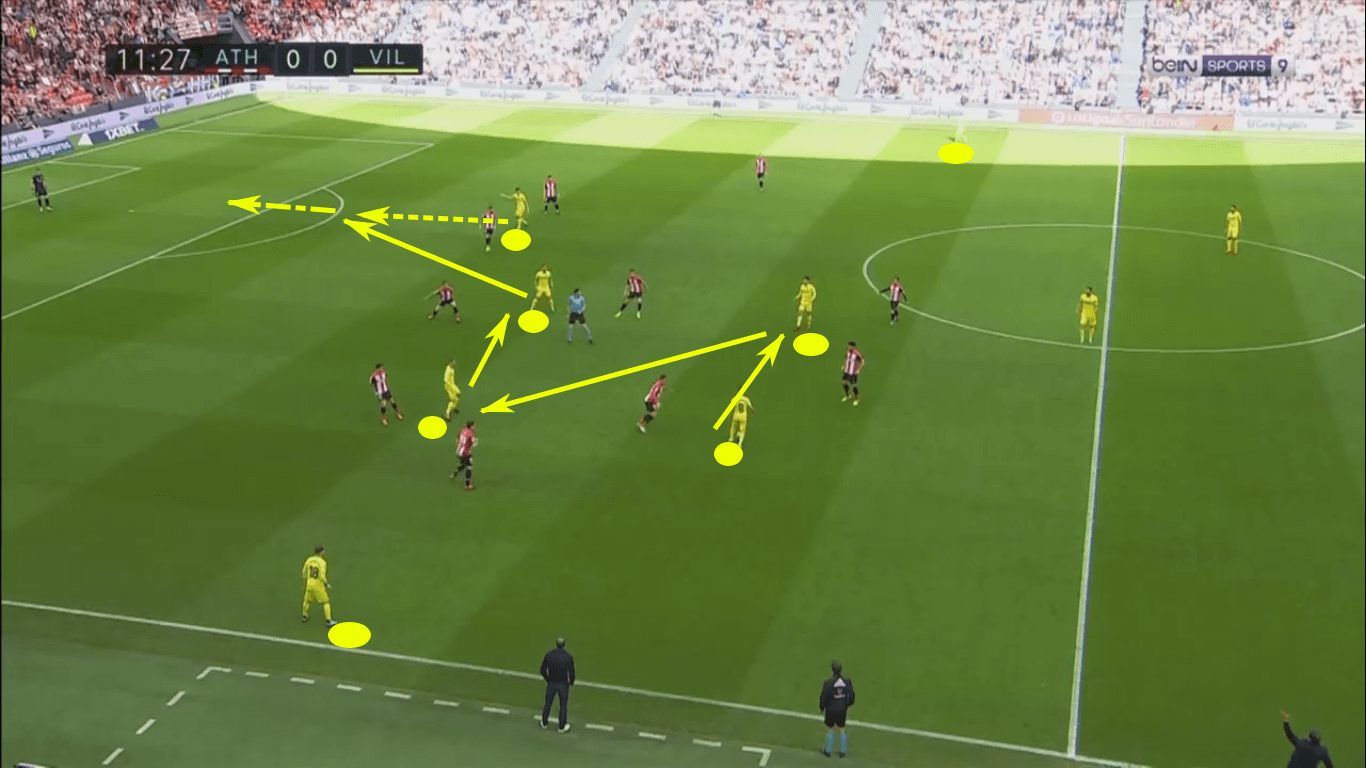 During Villarreal’s best chance of the match, the central overload produced a moment of brilliance as the four midfielders quickly combined before playing Alcácer in on goal. Only a great save from Simón kept the visitors off the board. When Villarreal was at its best, the central overload and combination play was at the heart of that success.

Correlation of PPDA and xG 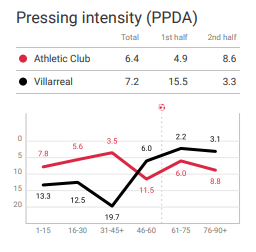 An analysis of the above graphic tells an interesting story. In the first half, when possession stats were relatively comparable, Villarreal allowed a total of 15.5 passes per defensive action. It wasn’t for lack of trying. Like most indirect, possession-based teams, El Submarino Amarillo tried to counter-press and recover the ball higher up the pitch. Athletic Club managed to consistently beat the first wave of pressure, forcing the away side to retreat into its defensive half of the pitch to recover its shape. Bilbao’s 4.9 PPDA is an exceptional number as it managed 18 high recoveries in this match. No team across the top 10 leagues in Europe averages a number that low over 90 minutes. Fortunately for Villarreal, neither could Bilbao.

In the second half, Villarreal was on the front foot defensively, registering an otherworldly 3.3 PPDA. Man-marking while Villarreal tried to play out of the back, especially from the goalkeeper, was hugely influential in the Basque side’s success (more on that in a moment). Notice that Bilbao’s PPDA dropped to 8.6. That’s still a very good number, but what’s interesting is the correlation of PPDA and xG.

While Athletic Club was the better PPDA team in the first half, it only managed a 0.39 xG. After reducing its PPDA in the second half, the home side produced 2.42 xG. Meanwhile, Villarreal applied excellent pressure in the second half, but its xG only improved from .27 in the first half to .4 xG in the second. Since Athletic was willing to drop everyone behind the ball, that high pressure from Villarreal allowed Bilbao to keep its compact defensive shape, making penetration extremely difficult. 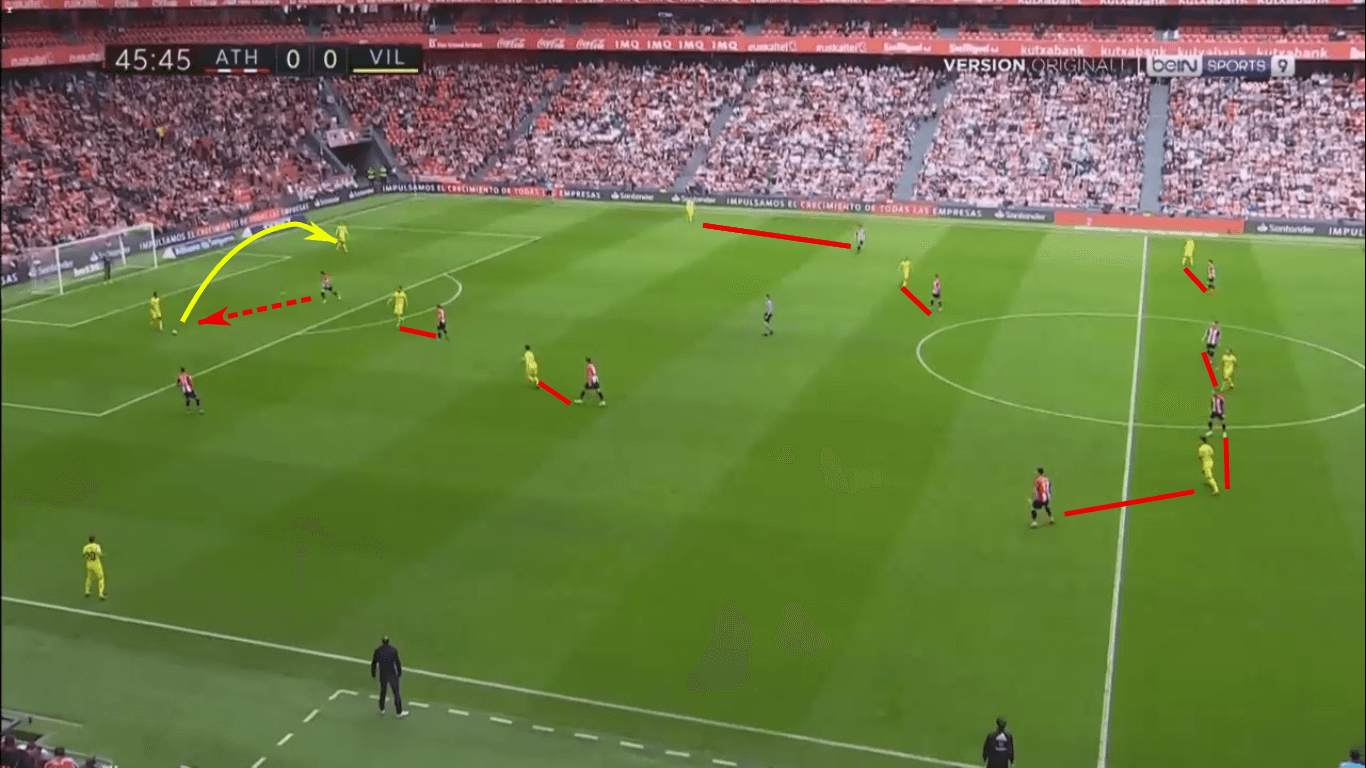 Bilbao’s press was so good the entire game that its man-marking is worthy of pictorial analysis. In this example, we see Bilbao press Villarreal with man-marking tactics. The approach is clear amongst the Bilbao defence and midfield. As you can see, the home side has employed the man-marking tactics with a plus one in defence. Yuri, the left-back, is ready to move forward to pressure A Moreno or backward to support his line. Closer to goal, Villarreal three options, though each carries some risk of a turnover. Ultimately, the veteran Albiol chipped García to find fellow centre-back, Torres.

García and Muniain switched roles as the former rushed off to pressure Torres. Though the initial pass broke the pressure of the first defender, Torres had no reasonable options, so he dribbled to his left with Muniain in pursuit.

As Muniain’s pressure became too great a threat, Torres spotted a gap in the Athletic defence. At least he thought he saw one. Bilbao managed to bait the pass into that shaded triangular area, intercepting the pass and transitioning to the attack. On a side note, notice the 2v1 in Bilbao’s favour as the centre-backs removed the threat of a long-ball to Alcácer. 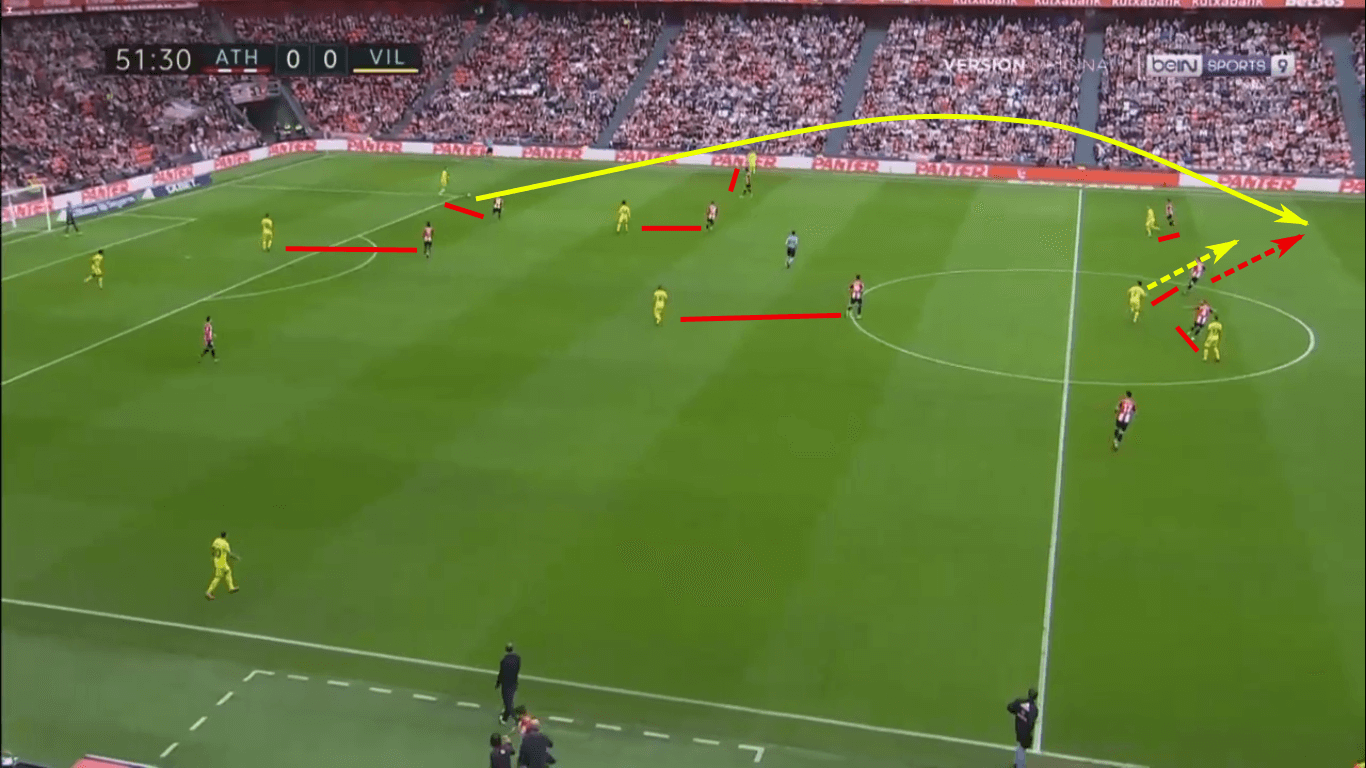 Later in the match, Bilbao was once again using the man-marking tactic, funnelling play wide and making the field compact. Again, with no safe options for a short or intermediate pass, Torres played long as pressure was arriving. His driven ball was claimed by Athletic as Villarreal was once again forced to make the quick transition from attacking shape to defence.

Bilbao’s 4-2-3-1 was relatively stringent with the top four players getting into high, central locations, allowing them to attack the goal at the appropriate time. With those players occupying the central channel and half-spaces, the outside-backs were tasked with progressing play through the wings. With Villarreal’s wide-midfielders transitioning to higher, more central positions when Villarreal was in possession, Bilbao had natural outlets in the wings. For the game, Villarreal only managed eight high recoveries, showing the home side was very efficient getting out of its own defensive third.

Of Bilbao’s 51 attacks, 43 were funnelled to the wings. With the open space out wide, progress came rather easily. More importantly, the pace of the Athletic attacks helped it generate many high-quality scoring opportunities in the second half. Like Villarreal, Bilbao had an overreliance on crosses, sending 24, but it was also able to produce numerical equality in the box for most of those distributions. With 8 successful crosses, Los Rojiblancos managed a 33% success rate. The average Bilbao attack lasted only 11 seconds, showing the side wanted to progress quickly and deliver an opportunity before the pockets closed. 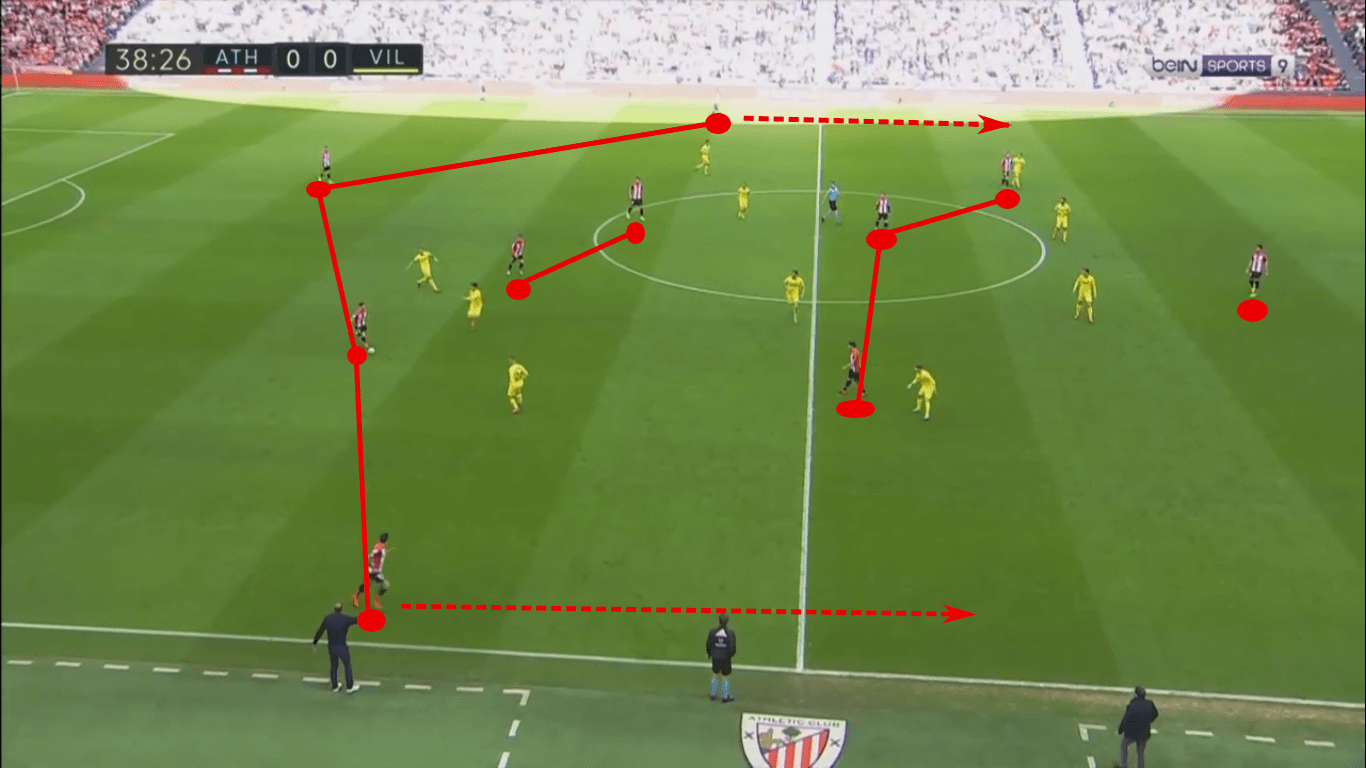 This Athletic Club attack offers a really nice visual of the attacking tactics used by the home side. D. García and Vesga always remained in close connection with the centre-backs during the build-up, freeing the outside-backs to push higher up the pitch. Much like Villarreal, the wings were primarily occupied by the outside-backs, allowing the wide-attacking midfielders to move more centrally. This tactic ensured Bilbao had central numbers ready to attack the box. 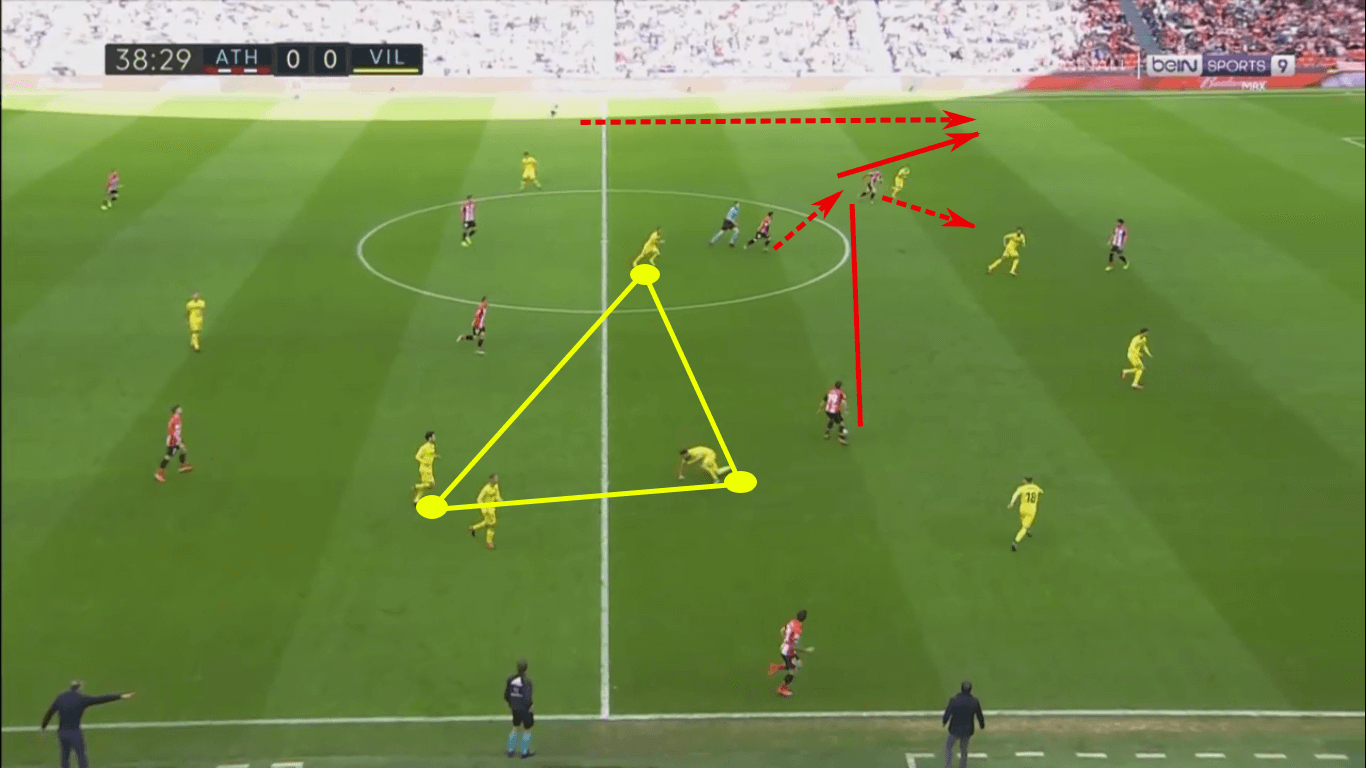 A nice turn from Gómez got him in between the Villarreal lines. Rather than taking the space in front of him, he played centrally to Muniain, cueing Córdoba to make a run into the 2/4 gap. His movement created the necessary space for Muniain to complete the switch of play to Yuri. 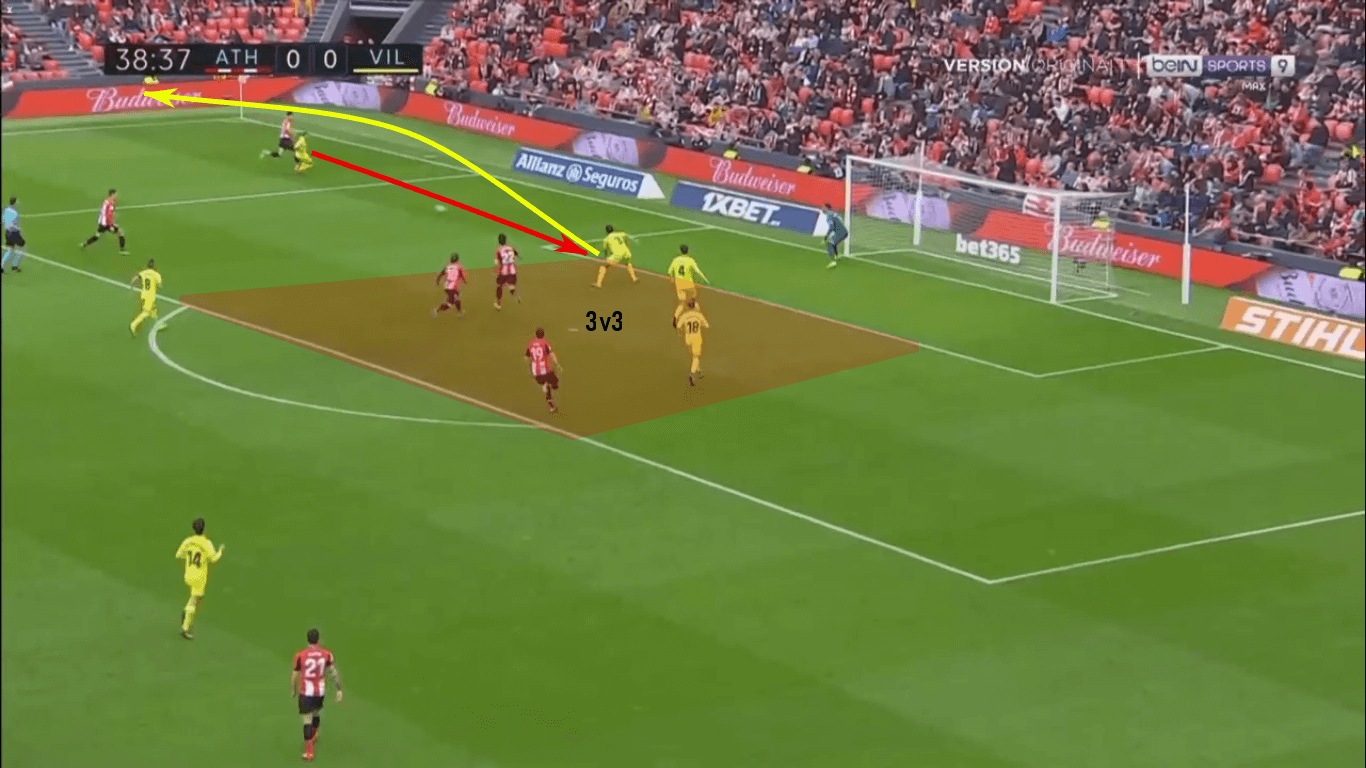 Though Yuri’s cross was cleared, Athletic did manage to get the 3v3 in the box that they wanted. The tactical commitment to own the middle of the park paid dividends for Athletic as it produced eight attacks with an xG of 2.12 from the centre of the park.

Had Villarreal scored on its breakaway in the 12th minute, this game would have played out much differently. The great save from Simón preserved the clean sheet and allowed Bilbao to continue playing within its system. The three points put Garitano’s side back in the hunt for continental qualification. His side’s inability to put away several high-quality opportunities will be disconcerting, but every other aspect of the performance was spot on. A Thursday-night Copa del Rey fixture against Granada awaits the Basque club, then it will travel to Real Valladolid over the weekend.

For Calleja and Villarreal, this was a missed opportunity to keep pace with Valencia and remain two points behind Real Sociedad for the last Europa League spot. The loss takes them seven points from the top four, making the return trip to the UEFA Champions League more difficult. A run of games against relegation fighters won’t make the schedule any easier as Villarreal runs into desperate clubs, starting with Leganes on Sunday.