The Derby d’Italia is always highly anticipated in Italy and Friday’s clash between Juventus and Inter was no different. Inter put up a good fight but Mario Mandzukic’s header proved enough to stretch Juve’s lead over their rivals to 14 points. This tactical analysis looks at the tactical trends of the game.

Massimiliano Allegri once again chose what seems to be his preferred XI in a fluid 4-3-1-2, except for Alex Sandro who was missing out with injury. This meant Mattia De Sciglio came in at left-back with Joao Cancelo at right-back. Paulo Dybala played just behind Cristiano Ronaldo and Mario Mandzukic.

Luciano Spalletti chose a 4-3-3 for Inter where the big news was Joao Mario starting in midfield instead of Matias Vecino and Miranda replacing Stefan De Vrij alongside Milan Skriniar at center-back.

Inter started the game well and impressed in the first half. Their pressing stood out early on. As usual the pressing was man-orientated but it was a quite flexible style of man-orientated pressing. The below image indicates how Inter’s two advanced central midfielders press Pjanic and Matuidi. In the center circle we can see the role of Brozovic; he covers the other midfielders and didn’t defend in a man-orientated fashion. 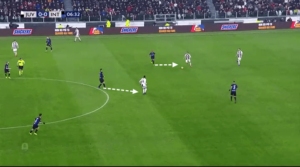 Inter were flexible in the way they pressed the closest player and they were always ready to follow the pressing action of a teammate. One such example can be seen below. Perisic has left the wing and presses Bentancur. Asamoah then reacts and move higher to press against Cancelo. We can again see the covering role of Brozovic (yellow). 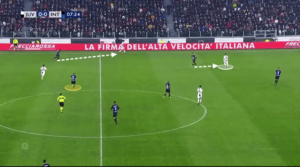 With Juventus’ four vs three numerical advantage in midfield you’d have expected them to dominate the centre but Inter managed this well. As you see below, the two wingers Politano and Perisic (white) defended in narrower positions to cover for the pressing actions of Gagliardini and Mario. In the below scene Gagliardini (yellow) leaves the midfield to press Chiellini while Mario marks Pjanic. Had the wingers defended in wider positions then Brozovic would have been alone against the three Juve players (black). When defending deeper Inter formed a compact defensive block and allowed Juve to have the ball outside of Inter’s defensive structure. As you see below they were really compact. Juve’s attacking play was therefore mostly restricted to the wide areas. 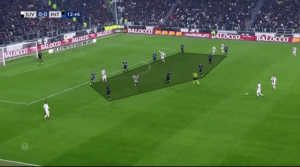 Inter did not just defend in Turin though; on the contrary, they really looked to pour forward when attacking. As you see below both full-backs (white) pushed high. Politano (yellow) had quite a free role on the right wing as he often came inside to look for space in the right-sided half-space. Perisic also came inside quite a bit, but picked a more traditional wide position than his Italian teammate. 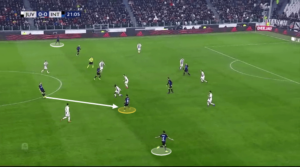 Juve’s pressing was also man-orientated and this forced Inter to come up with clever ideas to progress the ball. One method they used continuously was diagonal runs from Gagliardini and Mario into depth. These runs then opened up space to play the ball into Icardi and beat Juve’s press that way.

This rotation was mostly used on the right wing where Politano would come deep, receive the ball from Vrsaljko and then play a first-time ball into Icardi. That pass option was opened thanks to Gagliardini running into the space behind Politano. We can see this below with Gagliardini’s movement highlighted. 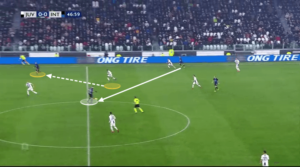 I’ve raved about Marcelo Brozovic on this site in the past and he impressed once more on Friday. As mentioned, Juve’s press was man-orientated and they looked to press Inter high. The sequence below is an example of the nature of their pressing. In the middle of the image we see Dybala marking Brozovic. 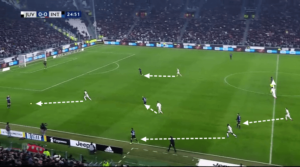 The below image is taken a few seconds later after the Croatian has received the ball. Dybala is putting pressure on him but Brozovic remains calm and awaits the exact moment to release the pass. Joao Mario makes a great movement out of the blindside of Bentancur who has been attracted to Inter’s left-back Asamoah. Brozovic then plays a great pass into Mario and Inter are off on the attack with the entire Juve midfield beaten by a single pass. Juve normally run over their opponents when pressing in this way but Inter managed to stand up to the test. Roberto Gagliardini even had a great chance to give them the lead after a brilliant move sent him through. Unfortunately for the Nerazzurri, Gagliardini hit the post. It would prove to be a ‘what could have been’ moment for Spalletti’s men.

Aware of the wing-focused attack of Inter, Allegri decided to deploy his men mostly in a 4-4-1-1 formation when defending deeper. This meant Mandzukic defended as a left winger with Bentancur as a right winger, Dybala (purple) as the number 10 and Ronaldo up front. You can see the formation below. Inter made a great start to the game and caused Juve some early problems, especially down the wings with Perisic getting in behind Cancelo a few times in the first 15 minutes. This prompted Allegri to change the sides of his full-backs after 18 minutes. De Sciglio went to right-back and Cancelo moved over to the left. This was likely due to the tactician preferring the defensively reliable Italian against Perisic while Cancelo’s attacking qualities would push Politano back. The decision would prove vindicated in the second half.

In attack, Juve continued with the 4-3-1-2 which has served them so well this season. Dybala was once again excellent as the number 10 with Mandzukic and Ronaldo playing as split strikers in front of him. We can see the shape below. The front three was very fluid and changed positions, with Dybala often dropping out to the right wing too. One such example can be seen below with Dybala (yellow) on the right and Ronaldo (black) as the central one. By placing the two forwards quite wide, their subsequent inverted movement opened up space for the attacking full-backs.

This was particularly clear on the left where Cancelo always moved forward. As we see below, Mandzukic (white) has moved inwards and taken Vrsaljko with him. This opens up the huge space for Cancelo to attack. 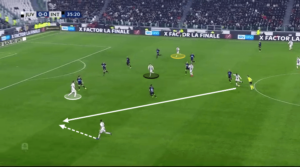 Another reason for Ronaldo and Mandzukic starting wider than normal was due to the aerial ability of Inter’s central defenders. Allegri talked after the game about avoiding Skriniar and Miranda with the crosses. By coming inside from the wide areas, Juve’s forwards could isolate Inter’s full-backs in the aerial duels. This is how the goal came about.

Cancelo, from the left wing, put the cross in towards the back post. There, Mandzukic beat Asamoah in the air to head home. It was a goal straight from the planning and understanding of Allegri. Once again he made correct changes to the team during the game to give them an edge. 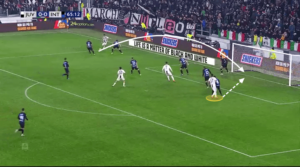 Juventus continue winning. This victory was the 14th from 15 games this season, and have now established a 14-point lead over Inter in third. This leaves Napoli as the only credible challenger at this point. Juve have really upped their game this fall and look largely unbeatable as things stand. Inter will be devastated by losing touch with the leaders after such an impressive performance. Their focus now turns to the Champions League where they must beat PSV at home and hope Barcelona at least draws against Tottenham in order to progress.