The Copa Libertadores didn’t start well for defending champions River Plate. After two consecutive draws they travelled to Brazil to face group leaders Internacional of Porto Alegre. After Palestino’s victory against Alianza de Lima one day before, River Plate had the obligation to bring at least one point back to Buenos Aires not to lose track of the group leaders.

In this tactical analysis, we show how Marcelo Gallardo proved once again why he is one of the top emerging coaches around the world. After a weak first half, where Inter was able to drive the game at their own pace, Gallardo tweaked the tactical disposition of River Plate, made some substitutions and notably changed the direction of the game.

Internacional were not able to hold onto a 2-0 lead at their own stadium and ended giving up a 2-2 draw, that given the course of the game and their position in the table leaves the Argentine side happier. Half of the group stage games are still pending, but River Plate will need to fight for a spot in the next round in a group that is proving tougher than initially expected.

First half: Controlling the game without controlling possession

Inter started the game with a 4-3-3 when attacking and a 4-5-1 when defending. It may be counter-intuitive, but the defending setup shown by the Brazilians allowed them to control the game even without having possession. According to Wyscout, River Plate had 59% of possession versus 41% of Inter. The five-man midfield line was positioned slightly ahead of the middle of the pitch and was the main force that allowed Inter to deliver a great first half and control the game. 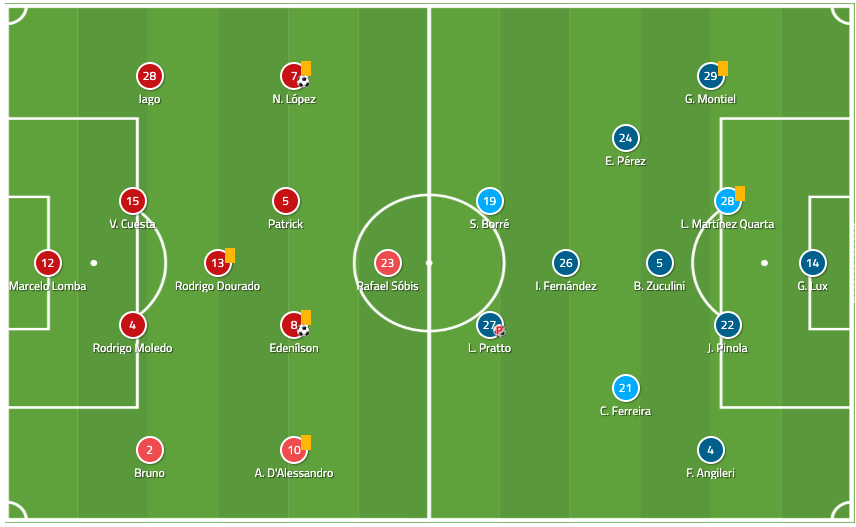 On the other side, River Plate started with a 4-4-2 with numerous players in the central channel of the pitch and forcing both wing-backs to travel long distances to cover both their defensive and attacking tasks. Despite the high temperature and humidity, River Plate started with an intense pressure close to the first third of the pitch, forcing Inter to use direct passes and long balls to attack, as seen in the picture below. 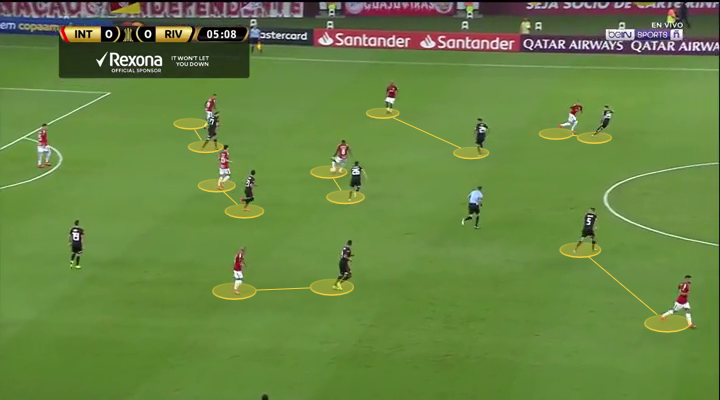 What River didn’t count on is that Inter actually felt very comfortable with this style of play. The home team didn’t fight for possession but looked to cut the lines of passes of River’s midfield, forcing them to also throw long balls. They had key individual marking, like the one shown below with Patrick usually very close to Enzo Pérez, leaving him outside of the build-up phase of River. 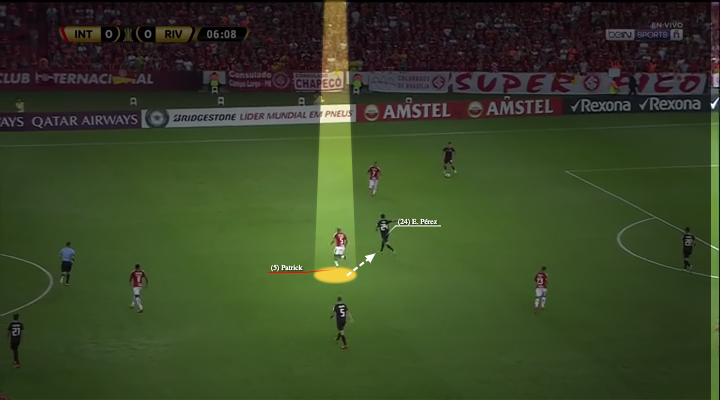 When recovering possession, Inter looked to get the ball as fast as possible to one of their attacking players playing on the wings, namely Andrés D’Alessandro and Nico López. They would cut inside connecting with Rafael Sóbis and both inside midfielders, Edenílson and Patrick.

These two were the main offensive weapons as their speed was a permanent problem for the defensive line of River Plate, especially Lucas Martínez Quarta. The picture below shows D’Alessandro cutting inside and hitting a long cross-field ball. 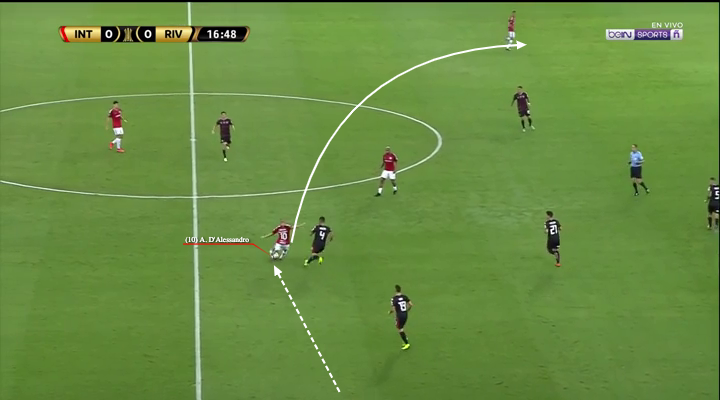 Offensively, River Plate were not able to unravel the defensive positioning of Inter. The midfield of the home team was able to break the offensive circuit of River Plate in two. Bruno Zuculini had to move back closer to both centre-backs to receive the ball, while Enzo Pérez hardly participated in the elaboration of River.

Nacho Fernández, one of the attacking midfielders, also had to move back to receive the ball, usually playing too far from both strikers. In the picture below it can be seen how far the distance between the midfield and the attacking players was for River. 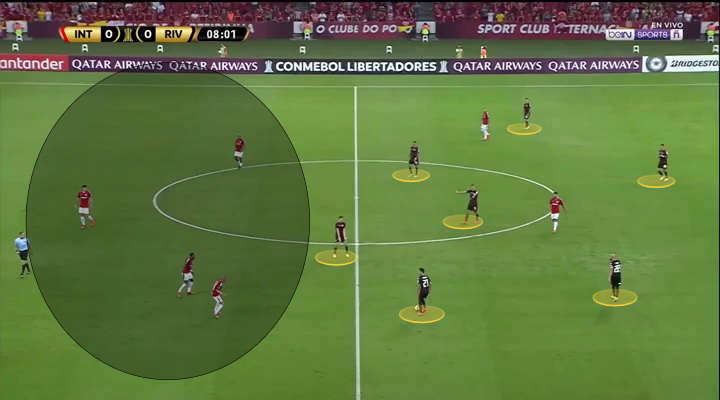 All of this while both River wing-backs were positioned high and wide, waiting for a ball that rarely got there. And when Inter recovered possession, they found both players wrongly positioned to defend, giving more spaces for Inter’s wide midfielders to attack with spaces.

When River managed to cross Inter’s midfield line and get the ball to their attacking players, they were usually able to find Gonzalo Montiel and Fabrizio Angileri with more space wide and thus create more danger. The picture below shows Montiel with more space after being able to move the ball closer to River’s strikers and central players. 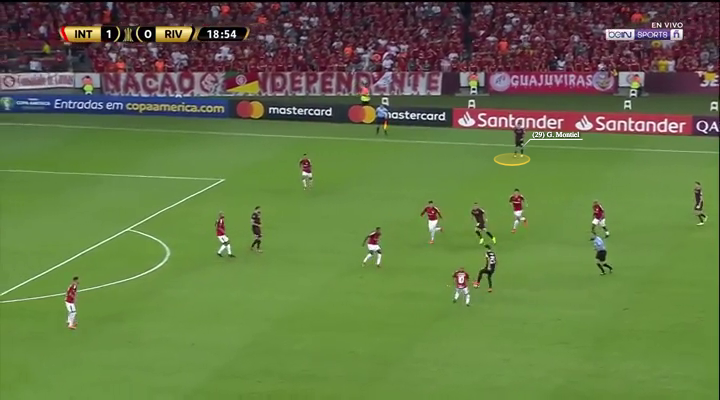 In this scenario, the home team took advantage of Martínez Quarta’s weak performance and some specific mistakes of the defensive structure of River and found themselves with a two-goal advantage. When the situation was more favourable for the home team, River Plate found a lucky penalty kick that reduced the difference to one goal going into the second half.

Second half: Marcelo Gallardo’s intervention changes the course of the game

The half-time talk in River Plate’s dress room by Gallardo seemed to be very effective. The coach understood that the attacking performance of his team had been very weak and he decided to change it. He introduced two substitutions, Nicolás de la Cruz for Cristian Ferreira and Camilo Mayada for Martínez Quarta, and switched to a 3-5-2 tactical setup. 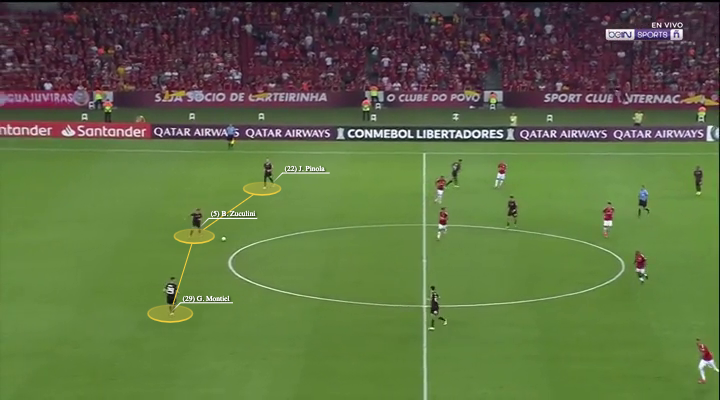 Gallardo understood that he needed more players in the middle of the pitch, and because Inter were not pressing high, he turned into a defensive line of three players. Zuculini was moved back as sweeper and Angileri and Mayada positioned as wide midfielders, the latter replacing Montiel who shifted across to become a stopper alongside Javier Pinola.

Former La Liga player Enzo Pérez remained as a defensive midfielder but also participated much more in the attacking build-up of River Plate, showing a much better performance compared to the first half. Meanwhile, De La Cruz and Fernández freely moved around and were able to find much more space to connect Pérez, both wingers and the forwards.

River felt much more comfortable as they started rotating the ball, and became increasingly dangerous using the wings, and taking advantage of the changes of pace of Fernández and De La Cruz. The new tactical setup can be seen below with both wingers opening spaces in the middle. 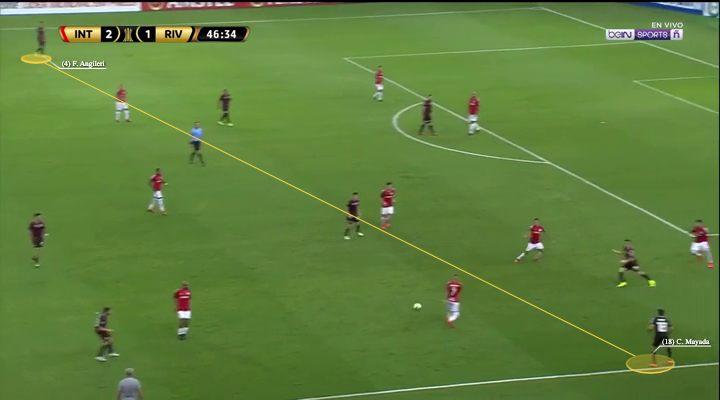 Even though River regained control of the game, they were not able to create numerous clear chances. They were able to tie the game after a beautifully executed free kick by the Uruguayan De La Cruz. Inter’s defensive positioning even allowed Zuculini, as seen in the picture below playing as sweeper, or one of the stoppers to move higher to press and participate in the attacking build-up. 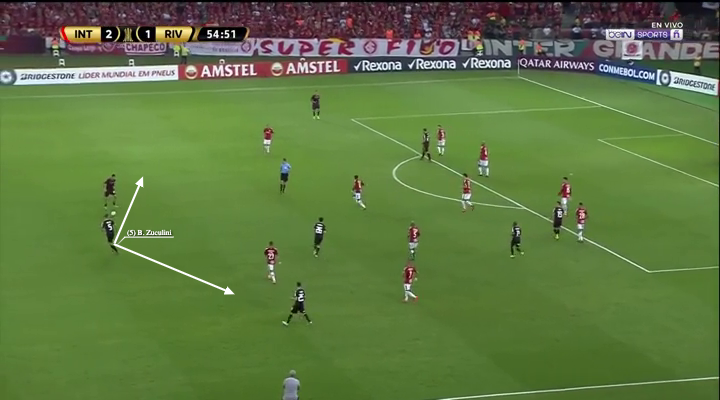 After being able to score the equaliser, River reduced the intense rhythm they had started the second half with, and Inter were able to elaborate more going forward. But the home team’s script didn’t change much, as they kept trying fast attacking transitions and long balls behind both of River’s stoppers.

With even more space compared to the first half given the three-man defensive line of River Plate, they increasingly looked for Sóbis, Patrick and Nico López to win second balls behind Montiel. The picture below shows that River had a hard time when dealing with long passes coming from Inter’s midfield. 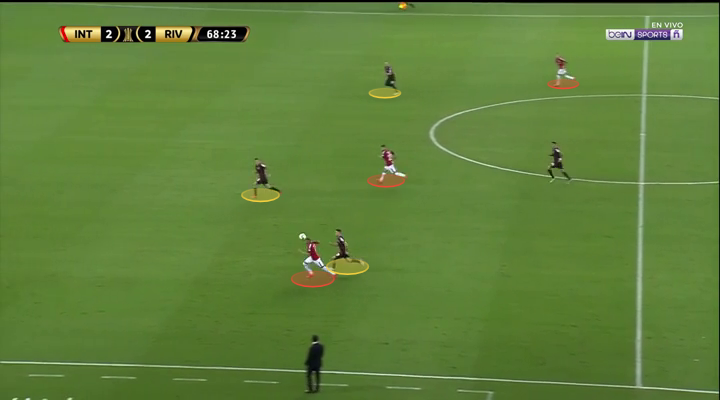 The plan was reinforced when Odair Hellmann decided to substitute D’Alessandro for Wellington Silva: speed instead of creativity, direct attack versus creativity. Silva positioned himself exactly where Montiel was defending and tried several duels against the Argentine with the constant support of Patrick, a very interesting midfielder that can participate in both defensive and attacking phases.

As the end of the game approached, spaces were increasingly available. Both teams were more balanced in their attacking intentions as physical wear started to have an increasing influence.

Neither team had clear chances, but every time Inter approached River’s penalty area, they were able to cause some harm, as the defensive structure of the visitors was never solid enough. River were able to improve their attacking output, but defensively they kept suffering from speed and was caught several times with numerical or positional inferiority.

Conclusion: One half for each team results in a fair draw

Tactically it was one half for each team. Also, possession didn’t directly equate to control of the game. River had the possession, but only controlled the game during the second half. The first half saw Inter patiently waiting for their rivals to hit long balls, and then take advantage of their speed, managing to grab a two-goal lead.

Meanwhile the second half was dictated by River’s attacking passing game and versatility, the one that let them win this tournament in 2018. The result leaves both teams with clear chances to advance to the next round, but especially River Plate will have to fight harder for a spot in the next round. They still need to visit the side that will probably be their main contender for that place in the round of 16, Palestino.