Spain finally secured their first win of Russia 2018 with Costa’s third goal of the tournament. On the one hand, Iran remained rigid with their high-class defence throughout the 90 minutes. On the other hand, the forward play and trademarked tiki-taka of La Roja worked well to put Iran’s defence at the back.

Iran played with 4-1-4-1 set up which speaks of ensuring horizontal defensive coverage as main part of their game plan. However, with only one striker or ‘real nine’, Azmoun, this also meant that Iran wouldn’t have enough bodies forward and the striker would often be isolated in the transitional attacking phases.

Spain played with their illustrious 4-3-3 setup which speaks of deep playmaking and tiki-taka as their game plan. Unlike their opening fixture against Portugal, Carvajal started as their right fullback thus landing his first appearance in Russia 2018 following his injury in the Champions League Final. Besides, Silva was placed as the right centre-mid with Iniesta and Busquets whereas Lucas and Isco played at the front with Diego Costa as the ‘real nine’.

Spain attacked from the left

With Alba and Iniesta at the left panel, it can be naturally assumed to have La Roja carried out most of its attacking moves from the left than from the right. While the away team is tactically set up to play more deeply than through the width, the highly compact defence of Iran made this a real challenge for the former. To deal with this, Spain targeted the left width and left half spaces for most of the game. The pass map provided by @11tegen11 using OPTA data also unveils the same with Costa also joining the offensive moves at the left. 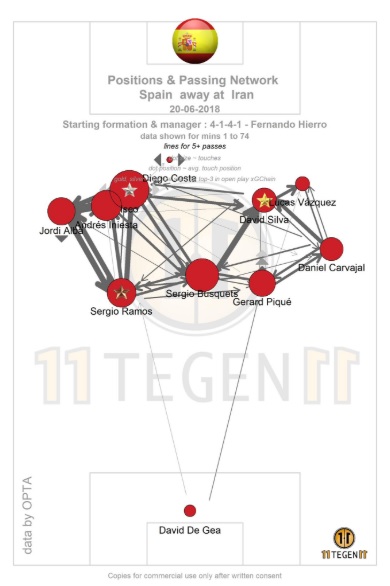 Busquets as a buffer in front of the two centre-backs maintained a good defensive balance. He distributed the ball across the vertical planes to keep the play up and running in Iran’s half. The two centre-backs played from behind to push the game in their respective half spaces. The pass map shows that Ramos being the left centre-back had more to play his role in Spain’s forward game at the respective half space than his right counterpart, Pique. Correspondingly, as the attacks are to be initiated from the left, Isco played deeper than his right counterpart Lucas who mostly remained wide. Due to the same reason, Alba being the left-back had more advanced role than Carvajal while both fullbacks remaining wide. Alba also created chances from the goal line width in multiple instances.

Iniesta and Silva dropped in their respective half spaces. Silva often cut to the left to join the play there. Lucas also cut into the opponent box from the wide when Spain was in a position to deliver attack into the box.

Iniesta’s role to connect Alba from the wide to Isco at the deep played key part to sustain Spain’s tiki-taka at the left planes. With the highly compact defence of the home team, the passing triangle by Alba, Isco and Iniesta often had to be closed together to avoid being isolated by the opponent defenders. That’s also why Spain’s offensive play at the left is more converged than is at the right in the passing map by @11tegen11.

Isco as a free man

Being placed at the front for Russia 2018, Isco has now more to contribute to attack. He proved himself well in the final third against Portugal last week. Against Iran too, he was the main attacking icon which is also clear in the passing map shown above.

Isco’s offensive contribution further enriched as he was assigned a freer role against Iran. Time and again, he came back to collect the ball and made forward runs. The 26-year-old dropped in the passing lanes and in free spaces in both midfield and the final third. He dribbled up the pitch out of Iran’s solid defence lines.

As he was free to roam, Isco joined his teammates across the flanks for the passing plays. He often pulled himself to the left width with Alba to allow Spain penetrate from there. Like Alba, Isco also dribbled up to the goal line width to make crosses to the inside.

With an intensely defensive tactical organisation, Iran’s attacking plan was to play on counters. As Spain’s formation already lacking width, Iran attempted to exploit it many times. Their free kick in the second half, which resulted in an offside goal, was also won because Taremi was free at the flank and wasn’t covered by Alba or Ramos earlier and so Ramos had to trip to stop him.

In the transitional attacking phases, Iran’s center-mids Ebrahimi and Amiri often joined the wide fullbacks and wingers for the passing plays at their respective sides to exploit Spain’s widths. The home team mostly initiated its attacks from the left as shown in the passing map provided by @11tegen11 using OPTA data. This also made Spain’s Carvajal and Lucas remain wide and be cautious of Iran’s quick penetration from there. 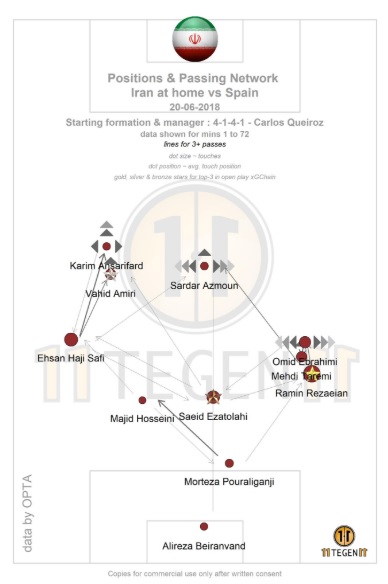 Iran made long passes and initiated some quick counters but most of the time they couldn’t deliver anything threatening out of that due to not having enough bodies forward.

One thing which annulled almost every attacking threat from La Roja was the highly compact and impenetrable defence of the home team. In multiple occurrences, Iniesta, Alba, and Isco all found themselves stuck in between Iran’s defence lines being isolated from their teammates while eventually losing possession. Ezzatollahi maintained the defensive balance of Iran really well in front of the backline.

With such an organised defence, Spain had limited options to penetrate. They only could pass to the space created at either flank and that’s what contributed to their offensive play concentrated at the left. Iran’s defenders were responding to Spain’s offensive tactics in the flanks and half spaces just by maintaining their horizontal compactness without pulling apart from the inside. This only could create at the far width but then again any deep cross into the box from the width would have to be nullified by Iran’s deep defensive block. Iran’s defence in the box enabled them to win possession from every failed attempt by Spain.

The only way that could work for Spain was to cut the defence from the deep during or by the end of transitions. That was a long shot, of course, but given its consistent forward play and offensive tiki-taka, Spain was somewhat likely to cut into the defence during transitional shifts.

And that’s what happened. Just after a transitional phase was over when Iran’s defence hadn’t set up yet, Iniesta dribbled up deep into the space making the defenders eying on him thus losing some concentration from Costa. Iniesta passed to Costa who scored at the right time before the defenders would block his way from the front. Spain won their first fixture of FIFA World Cup 2018 with that goal.

Spain showed their mettle by breaching and scoring out of Iran’s impermeable defensive block. Isco’s dribbles on the flanks and half spaces and Iniesta’s dribbles into the centre were daring enough to keep Iran’s defence stick to their half. Though Spain should have to be more alert of its lack of width in defensive phases – a natural drawback of 4-3-3 – in the future matches especially against the aggressive teams.