The first match of the knock-out stages of the FIFA Women’s World Cup 2019 between Germany and Nigeria took place at the Stades des Alpes. Germany were the favourites and by and large, the match played out exactly as people had expected. Although Nigeria were no push-overs, Germany won the match comfortably thanks to a first-half goal from a corner, a penalty shortly after, and then another goal in the 82nd minute due to a defensive error by Nigeria. In this tactical analysis, we’ll look at what tactics were employed by both teams, what Germany did to secure their place into the next round, and where Thomas Dennerby’s Nigeria could’ve done better. 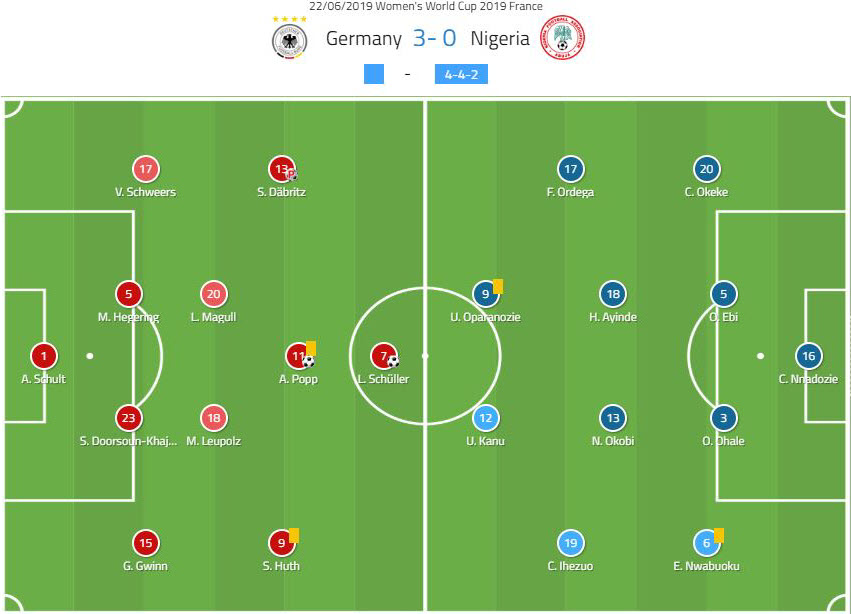 Although Germany are a possession-based team, they played a hybrid of direct football along with slower surer build-up play. Often times, the goalkeeper would hit long balls towards the forward on the left-hand side or the left-back. But when they did build out from the back, it was tactically interesting and worth talking about.

Germany’s 4-4-2 turned into a 3-1-5-1 in-possession when the goalkeeper had the ball. The two centre-backs would split up and the central midfielder – Melanie Leupolz would slot in in-between them both. Both the full-backs would press on very high and the wider midfielders – Svenja Huth and Sara Däbritz would drift inside. The other central midfielder would act as the single pivot and provide a passing option in the centre or for circulating the ball to the other side. One of the forwards would stay alongside the midfielders while the other one would lead the line and try to pin back the Nigerian back-line. This was their base set-up and all of this is illustrated in the image below.

Although Germany used a varying number of ideas to implement their tactical superiority over Nigeria, the idea was the same. They’d try to overload the spaces in between the Nigerian midfield and defensive lines and force them into a backwards momentum. This, in turn, allowed the German players to carry the ball forward into space and ensure that Nigeria were not able to get out of their own half.

The setup was ideal to deal with Nigeria – who pressed without support from the midfielders. Hence in the first phase of the build-up, Germany were able to achieve numerical superiority easily. As soon as the initial press was bypassed, Germany tried to play long diagonal balls to the full-backs who were usually found very high up the pitch. The idea again was to achieve numerical superiority on the flanks. Although this was difficult as Nigeria did play with two tight lines of four, when the winger moved up to press the German centre-backs, it created a void and isolated the Nigerian full-back 2v1 against the German wide players.

Germany usually tried to attack down the flanks. However, when Nigeria were able to cope up, they changed their point of attack centrally. The secondary striker would drop in-between the lines or alongside her midfielders and this effectively overloaded the Nigerian double pivot.

Against stronger opposition, Nigeria are hesitant in pressing very high up the pitch. This setup was on display against Germany as well as Nigeria hardly entered Germany’s half of the pitch when the latter had the ball. Instead, they sat in a medium 4-4-1-1 or a 4-4-2 block. The forwards were the initiator of the press and they tried to press the German centre-backs. However, due to the presence of the extra midfielder in the deeper areas, the press was not efficient enough to get Germany to clear the lines as they always found a free player.

Nigeria focused on ensuring central compactness and deny Germany access to the areas in front of their box. They did this by marking the German midfielders man-to-man. However, Germany’s overload of the midfield lines, as well as the varying tactics, was too much for Nigeria to deal with and during sustained periods of possession, it was all too easy for Germany to create gaps in the Nigerian back-line.

Nigeria saw less than 30% of the possession against Germany and hence they resorted to counter-attacks to create chances. Germany used a wing-oriented attacking mechanism and Nigeria replied in the same way.

As soon as Nigeria won the ball, they’d try to play it down the wing to the winger. The wingers would create space for themselves and then either try to dribble at the full-back themselves or cross in-field with their weaker foot.

Nigeria’s counter-attacks were very effective as most of them got them corners or resulted in shots or missed shots. The Nigerian wingers stayed wide and tried to stretch the opposition as well as simultaneously create space for themselves. This also allowed space to be created for the underlapping midfielders who’d make blind-sided runs behind the full-back. Indeed, Nigeria missed some very high-quality shots which would have easily resulted in open-net tap-ins.

Germany tried to nip the Nigerian counter-attacks in the bud by committing tactical fouls up the pitch. However, when they couldn’t, they’d move to a 4-4-2 and with their forwards starting the pressing movement. The wingers or wide midfielders would move outwards to block the passing lanes to the full-backs and the double pivot split up with one midfielder – usually Lina Magull moving up to provide vertical compression while Leupolz sat deeper and patrolled the space in front of the centre-backs. If the ball was progressed via the flanks she moved in to cover but only until the winger got back to defend. This ensured that she could then take positions more centrally so that when Germany won the ball back, she could provide a passing option in the centre or a link between the defence and attacking duo.

Germany became the first team to progress to the quarter-finals while Nigeria will have to go home. Amongst many problems non-tactical in nature, such as the lack of support to women’s football and wage gaps, Nigeria still showed character to reach the knock-out stages. The reigning African champions have surely learned a lot from this World Cup and featuring an exciting bunch of youngsters, and under the guidance of the experienced Thomas Dennerby, they’ll surely be a force to reckon in the years to come.